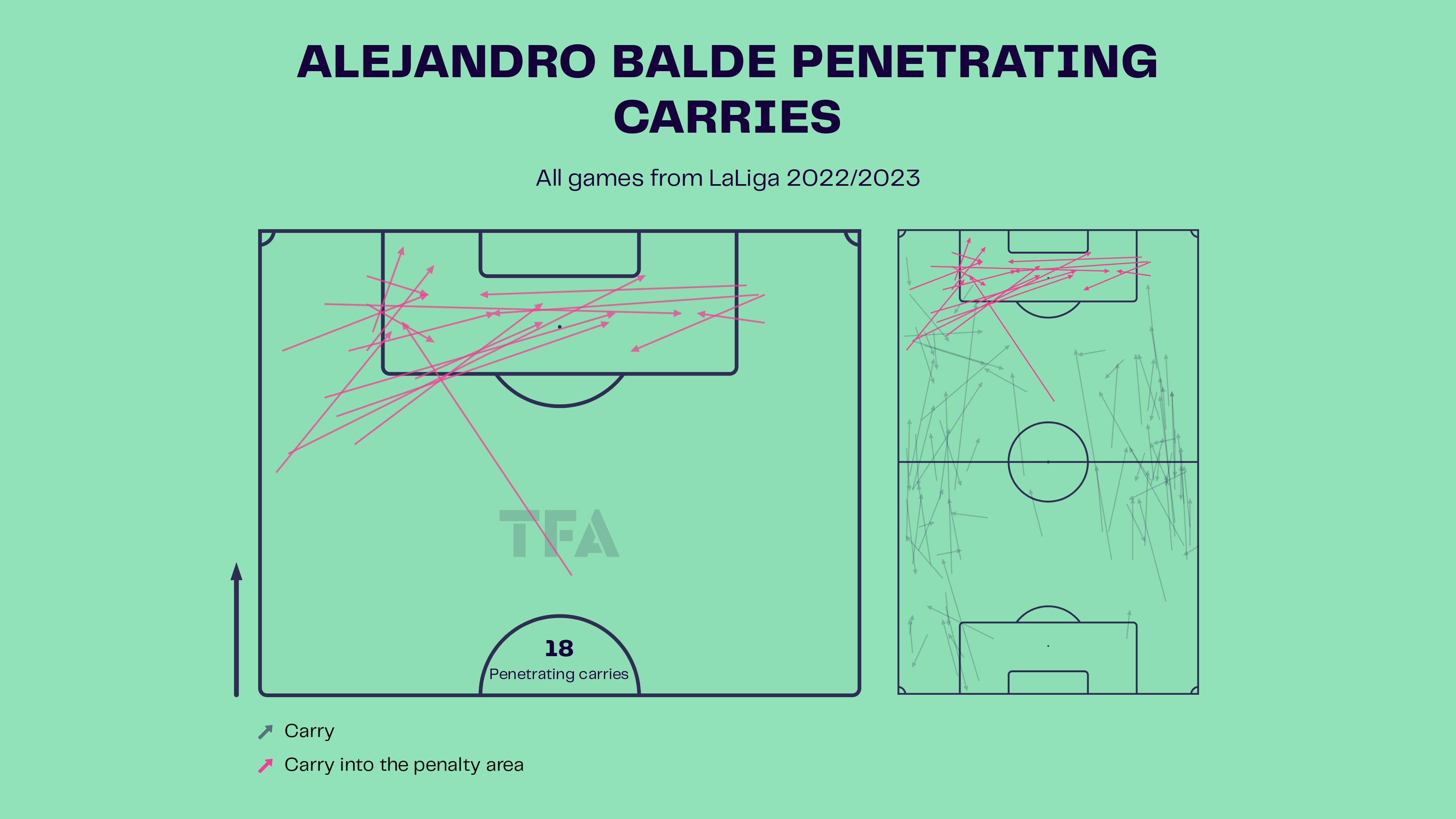 Alejandro Balde has been a true find for Barcelona, as the youngster seemed to have, at least temporarily, solved Barcelona’s full-back issue. The 19-year-old left-back was given a chance to play in the first team last year and has grown into a regular starter in La Liga. This season, coach Xavi Hernandez has used him as a right-back as well. Barcelona have struggled to find a natural successor to Dani Alves ever since the Brazilian left the club in 2016. But the La Masia graduate has given Xavi an extra option in both full-back positions and has proven himself capable of playing at the highest level.

We take a look at some stats to understand how Alejandre Balde has solved Barcelona’s full-back issues. 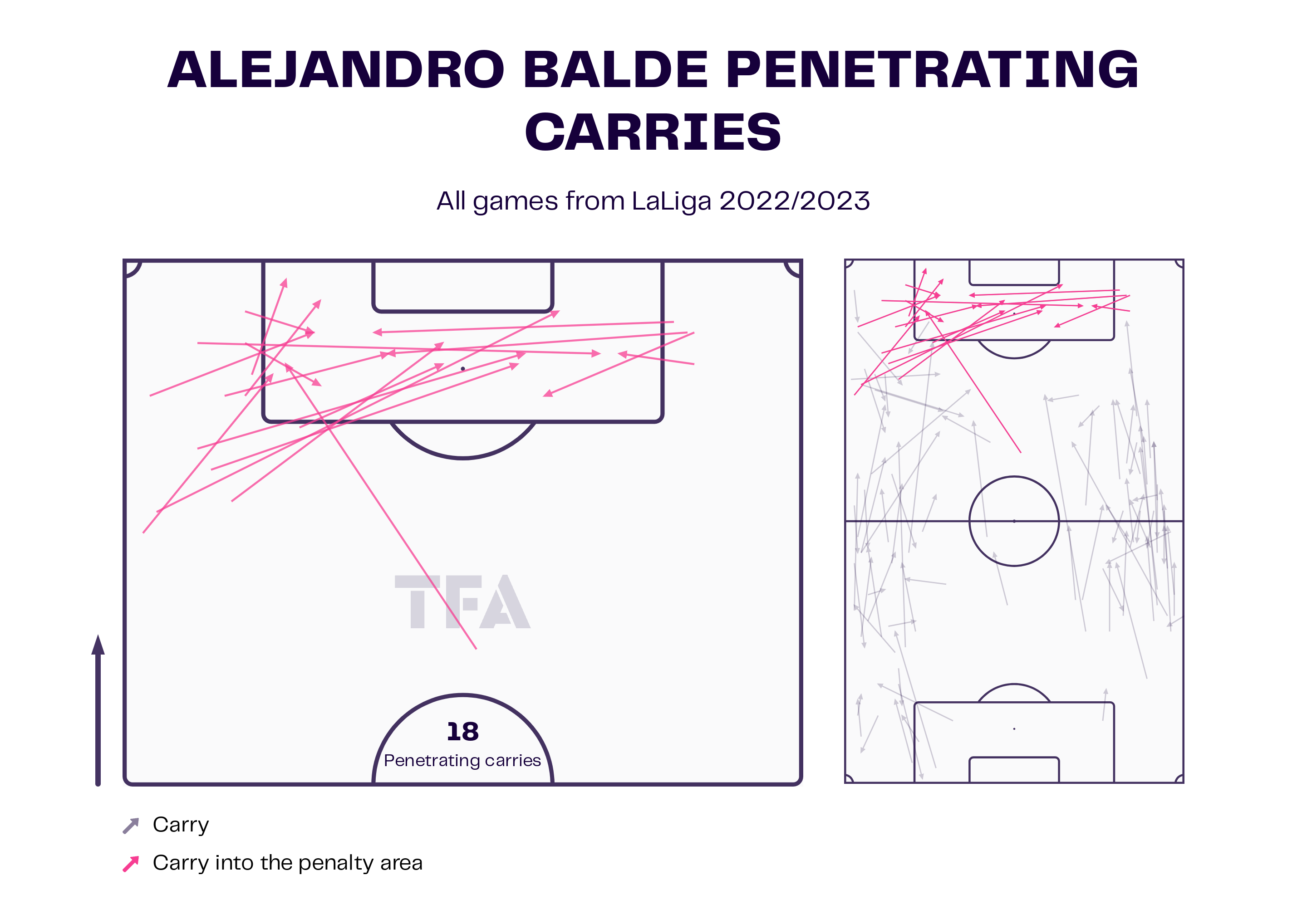 One of Alejandro Balde’s best attributes is his ability to carry the ball forward. He drives forward with the ball and finds good passes in the final third. The youngster’s attacking threat has been very important for Barcelona, as he makes an average of 2.88 dribbles and 2.4 progressive runs per game. The Spanish International has made 18 penetrating carries this season and has 0.19 assists per game to his name. The youngster has three assists to his name in La Liga this season and has helped the Blaugranas immensely with his accurate crosses into the penalty box. 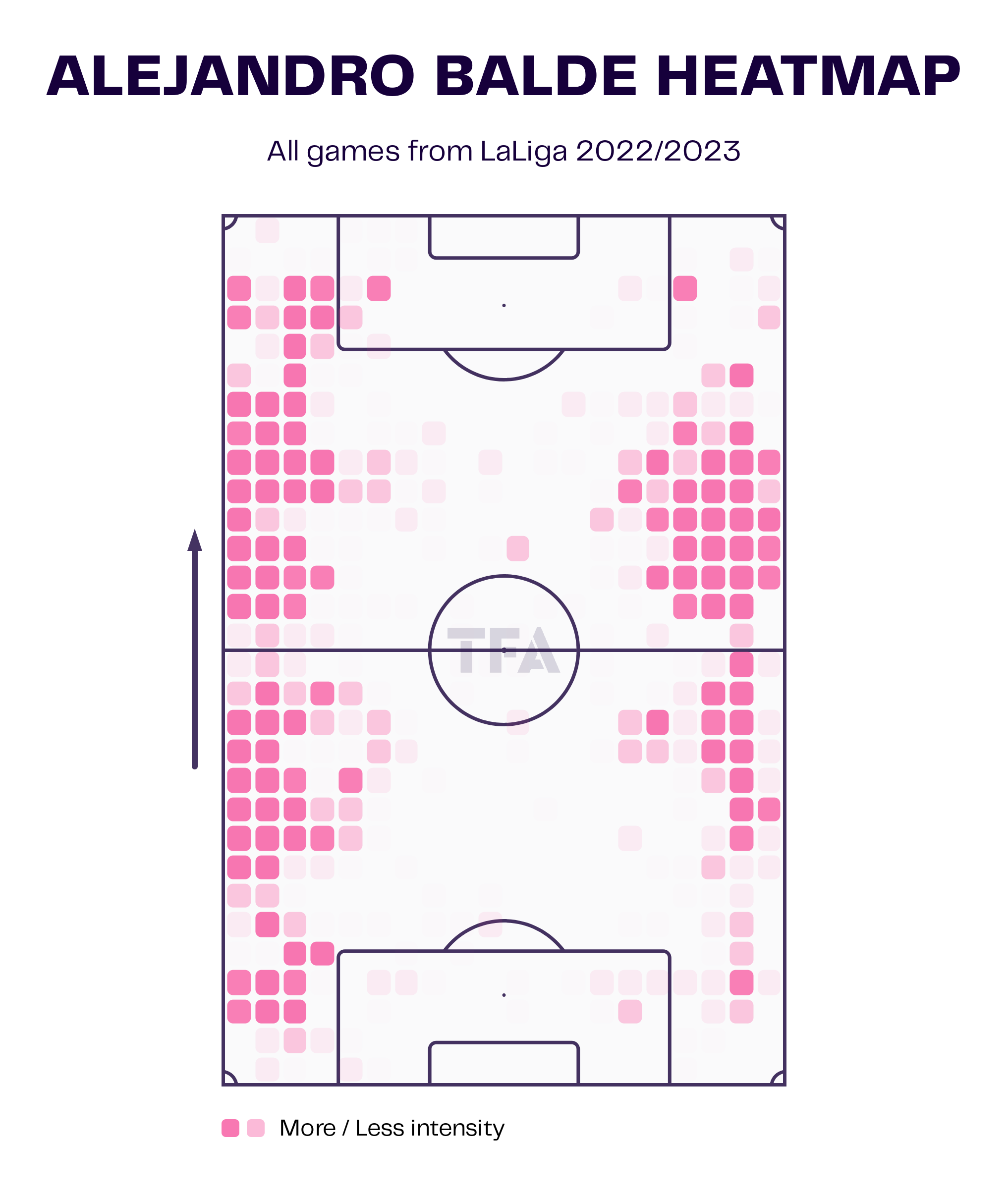 Alejandro Balde has been used both as a right-back and as a left-back by Xavi Hernandez. He was chosen ahead of the experienced Jordi Alba because of his pace and ability to track back and defend against counterattacks. He makes an average of 6.05 defensive duels per game with 76.2% accuracy. The 19-year-old overlaps well and can also occupy the half-spaces when the winger goes forward. He recovers possession 7.49 times per game, with around 40% of them in the opponent’s half. His positioning high up the pitch helps the team recover possession in the opponent’s half and launch an attack from there. 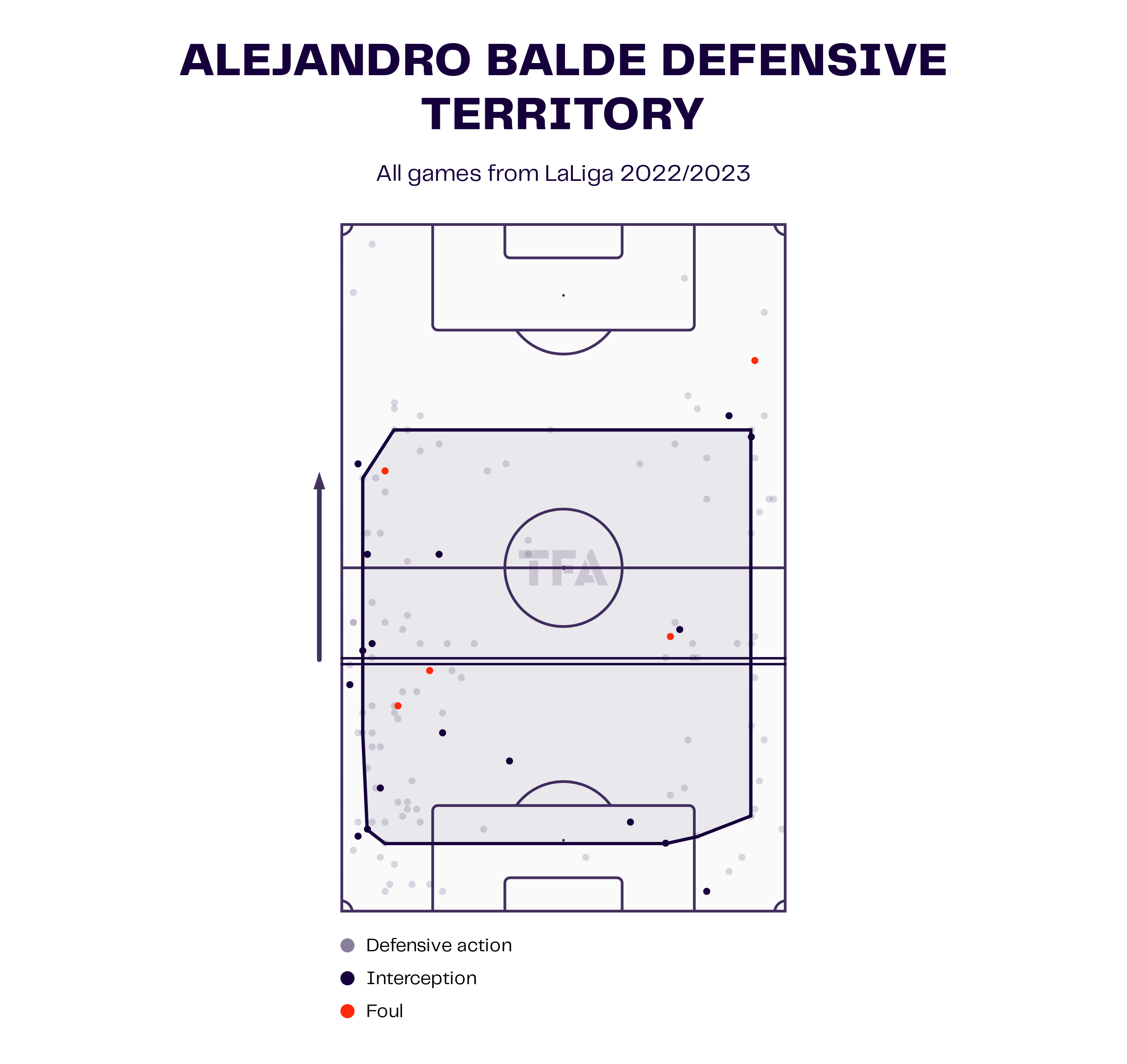 The 19-year-old is an attack-minded full-back and therefore has the right profile for Barcelona. But one of the main reasons he is preferred over experienced players is his speed and defensive capabilities. He wins back 2.23 loose balls per game on average and makes 3.17 interceptions as well. His versatility to play on both sides has helped the team a lot. 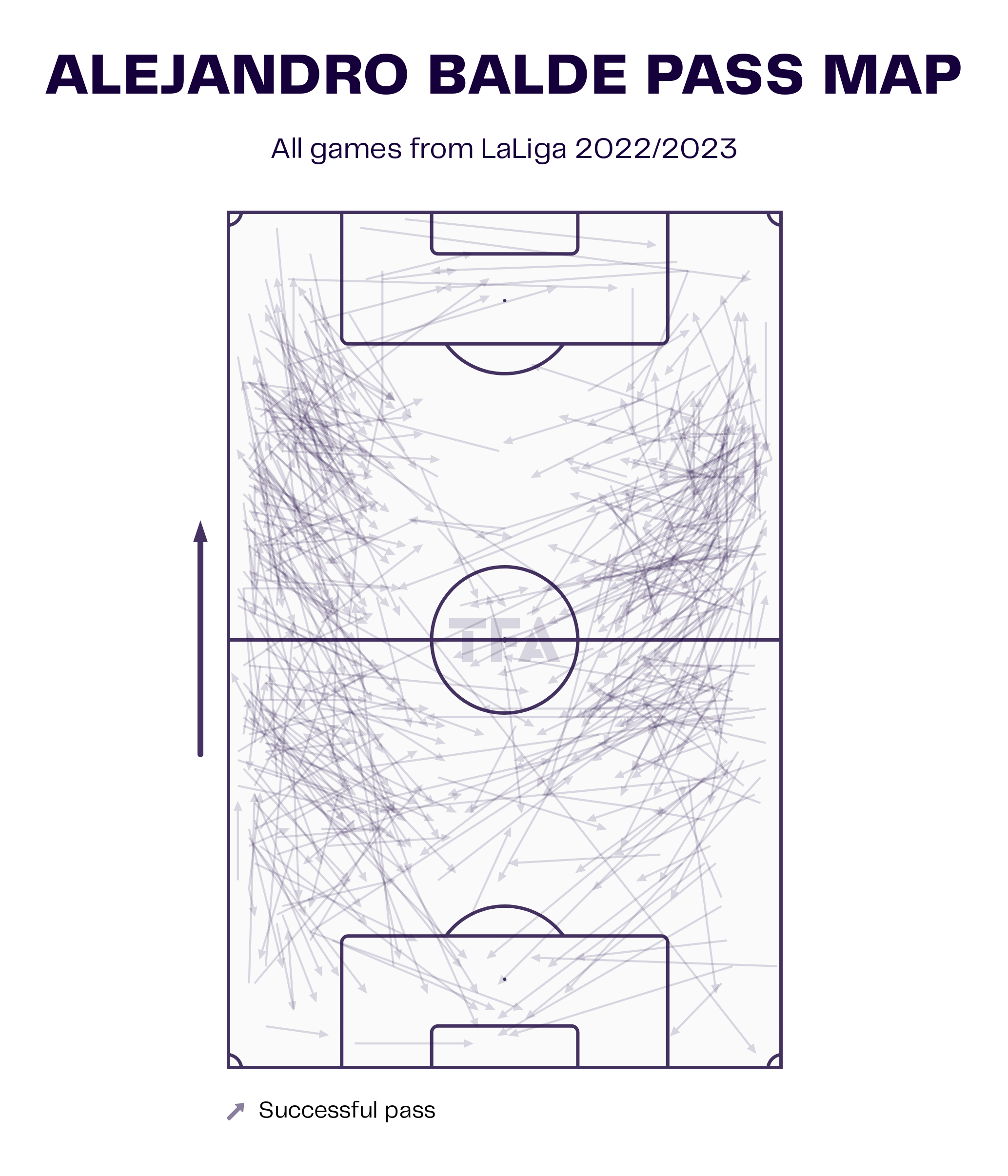 Being able to provide good passes is the bare minimum to play in a Barcelona shirt, and Alejandro Balde has a very good passing record. He makes an average of 54.17 passes per game with an astonishing 92.1% success rate. Balde also makes 4.71 passes to the final third, also with 87.8% accuracy. He has three assists to his name already this season and would have had more if Barcelona players converted all the chances they got.

Alejandro Balde has been a revelation for Barcelona and has already become an integral part of the team at 19 years old. The youngster has performed well whenever he has been given a chance. Xavi Hernandez will be hoping that he can eventually replace Jordi Alba as the left-back and also continue to deliver good performances when he’s asked to play as a right-back as well.

Real win the bragging rights & the three points as they...

How did Real Betis overcome Espanyol to progress in the Copa...