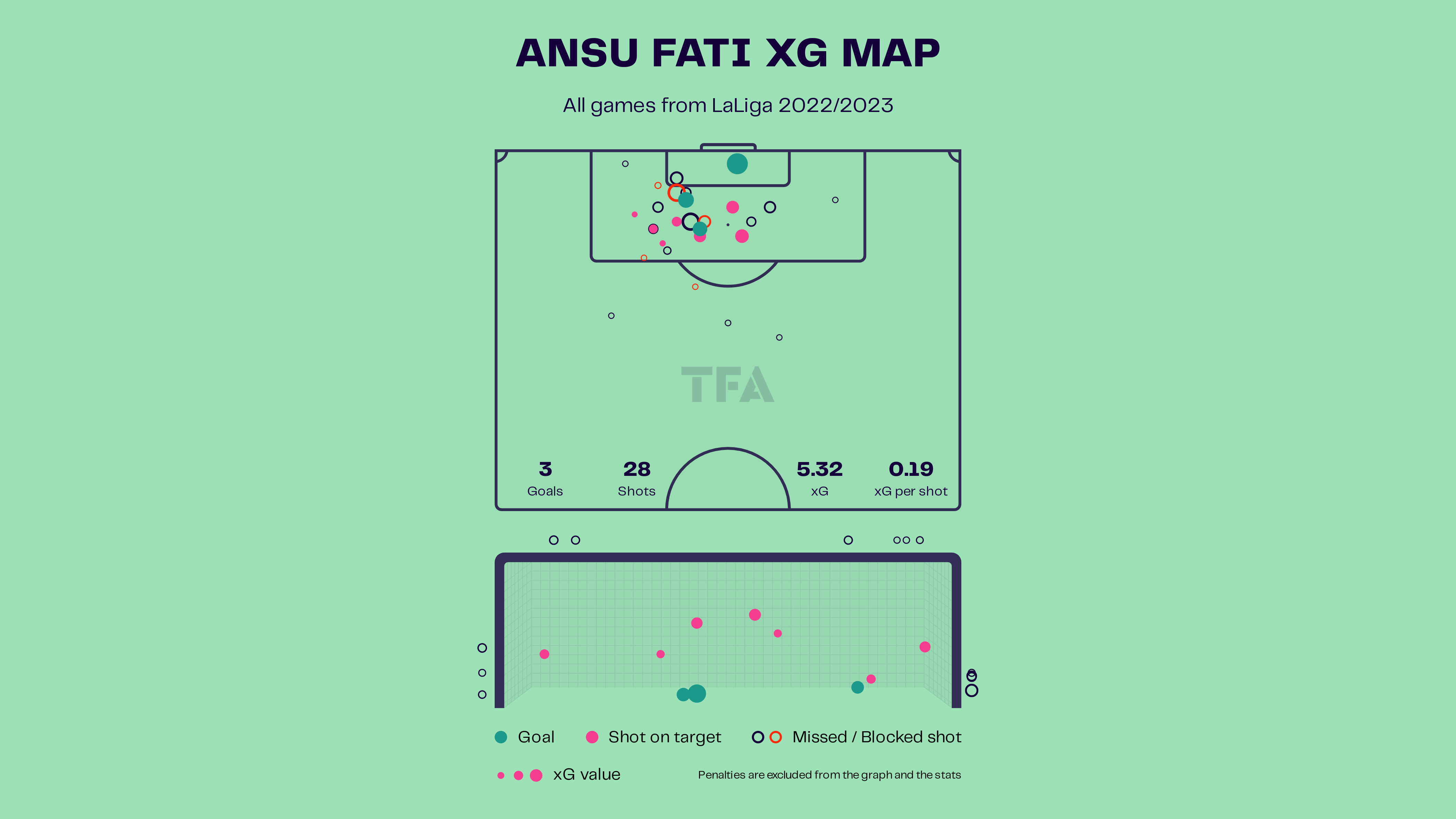 The iconic number ten jersey at Barcelona was handed over to Ansu Fati following Lionel Messi’s dramatic departure from the club in 2021. The expectations were high, and Ansu Fati represented the face of the new Barcelona. But fate had other plans. Another injury kept him out for almost the entire season. But this season, he is fit and looks to be on the way to finding his best form, as the youngster has looked dangerous whenever he has played. His pace and the natural ability to pose a goal-scoring threat have provided Xavi with an extra option in his attack.

We take a look at some of his stats to understand how he is proving to be the X-factor in Xavi’s Barcelona.

Ansu Fati has played all the matches this season but has only started three matches. While Ansu’s exclusion from some of the matches was due to injury concerns, Xavi seems to be preferring other wingers over Ansu at the moment. He has scored three goals in La Liga and has three assists to his name this season. 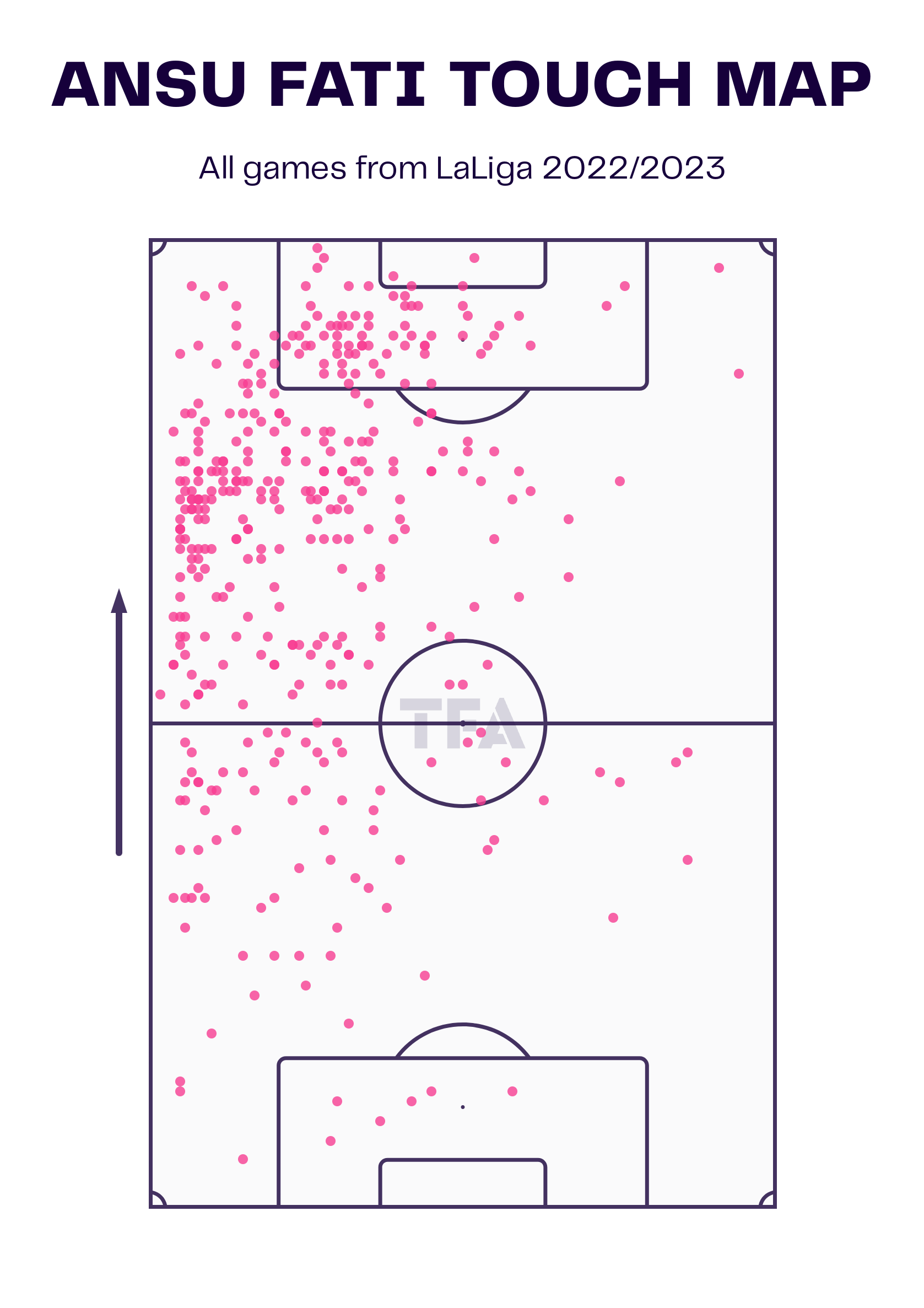 The above viz shows the touch map of Ansu Fati in La Liga this season. Playing as a left-winger, Ansu usually prefers to stay wide and cut inside the box. He also likes to combine with the wing-backs and the interior midfielders to create danger in the attacking third. This season’s El Clasico explosion through the left wing is the perfect example of what he is capable of. He likes to get into the box and averages 8.46 touches in the penalty area per game. 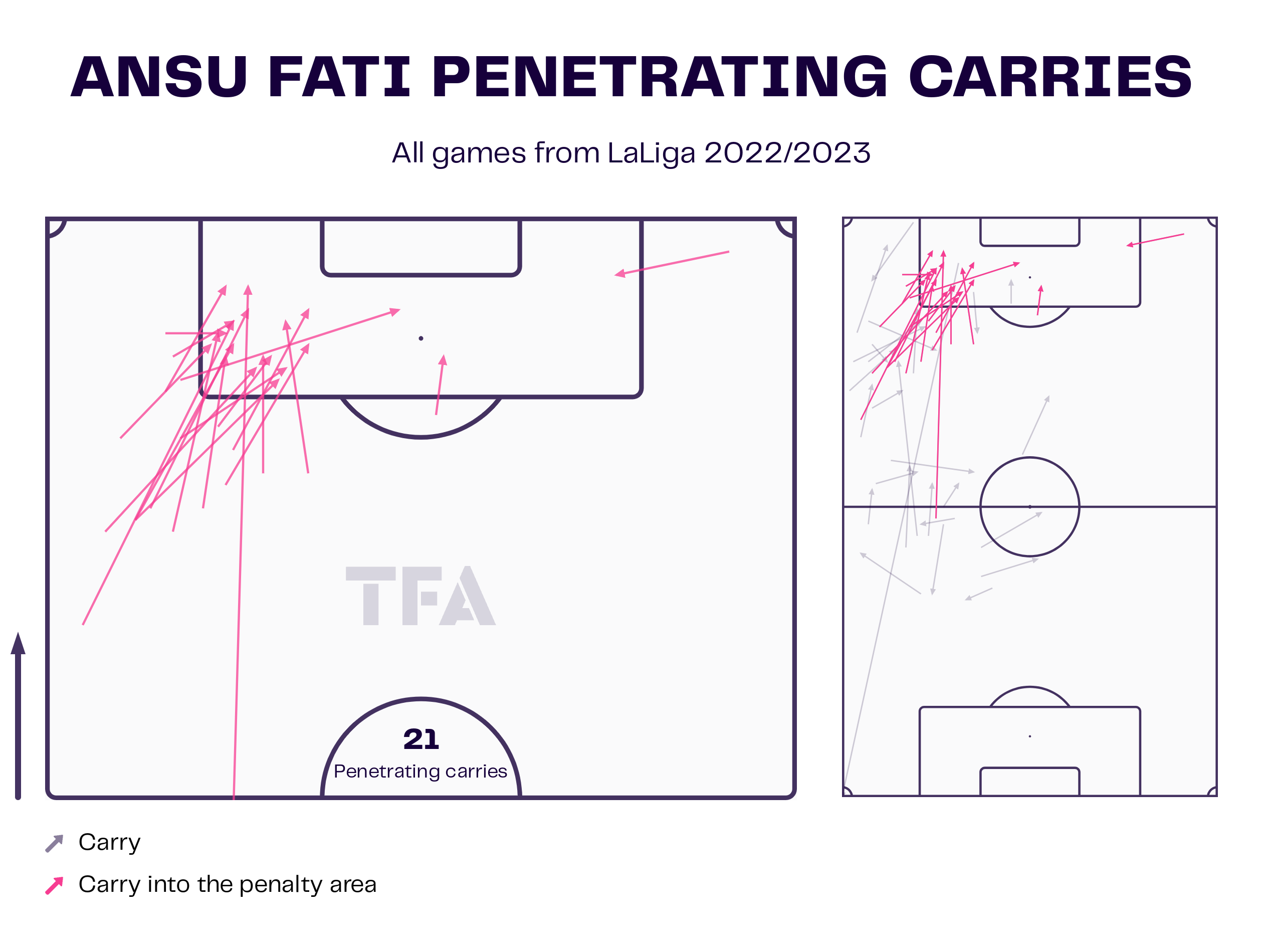 Another quality of Ansu Fati that gives him an edge over some other players is his ability to go past players. He has made 21 penetrating carries this season through the left flank and has good dribbling skills as well. Fati makes around 5.36 dribbles per game with 45.2% accuracy and constantly threatens the posts with his killer instinct in front of the goal. He also makes 2.76 progressive runs per game as well. His Barca DNA is perfect for Xavi’s team, as he can easily understand what is expected of him. 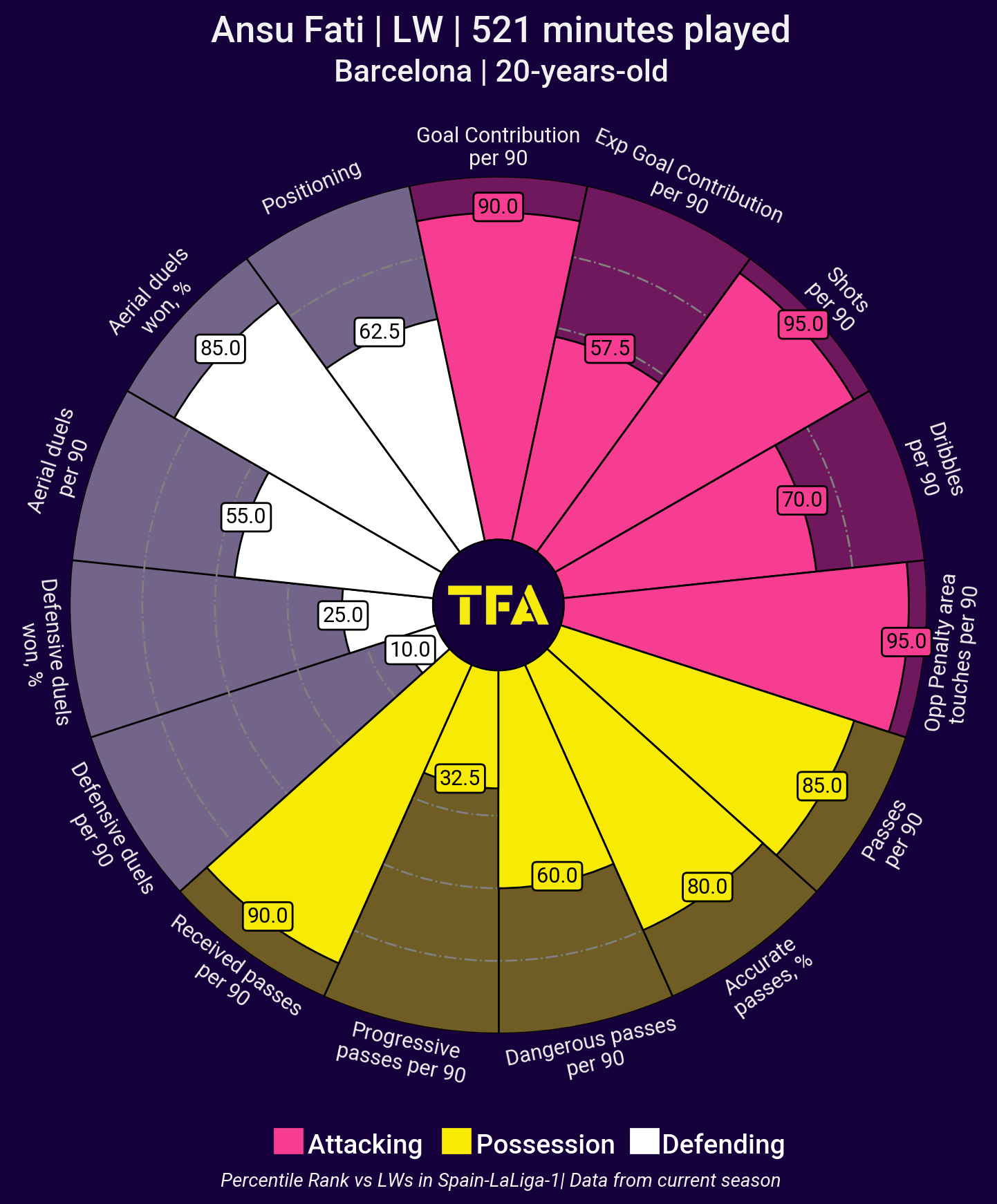 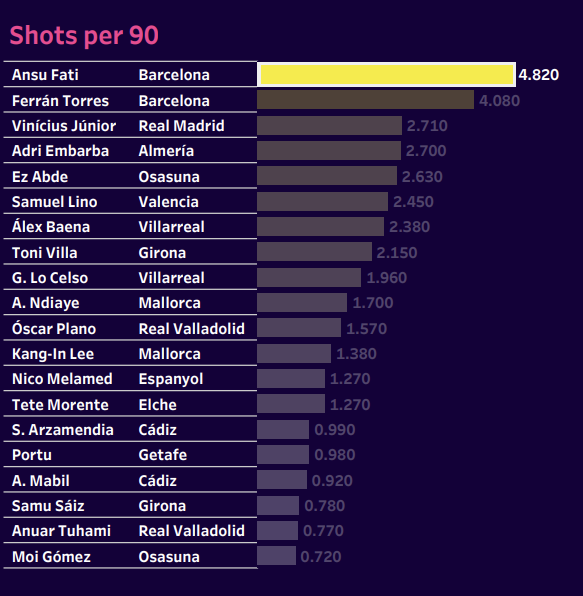 Ansu Fati has the best record for shots per 90 minutes in La Liga. He averages 4.8 shots per game and has a 35.7% accuracy rate. Ansu Fati’s readiness to take shots is what makes him different from other players. He has no hesitation in going for the goal and always keeps the opponent’s goalkeeper in check. 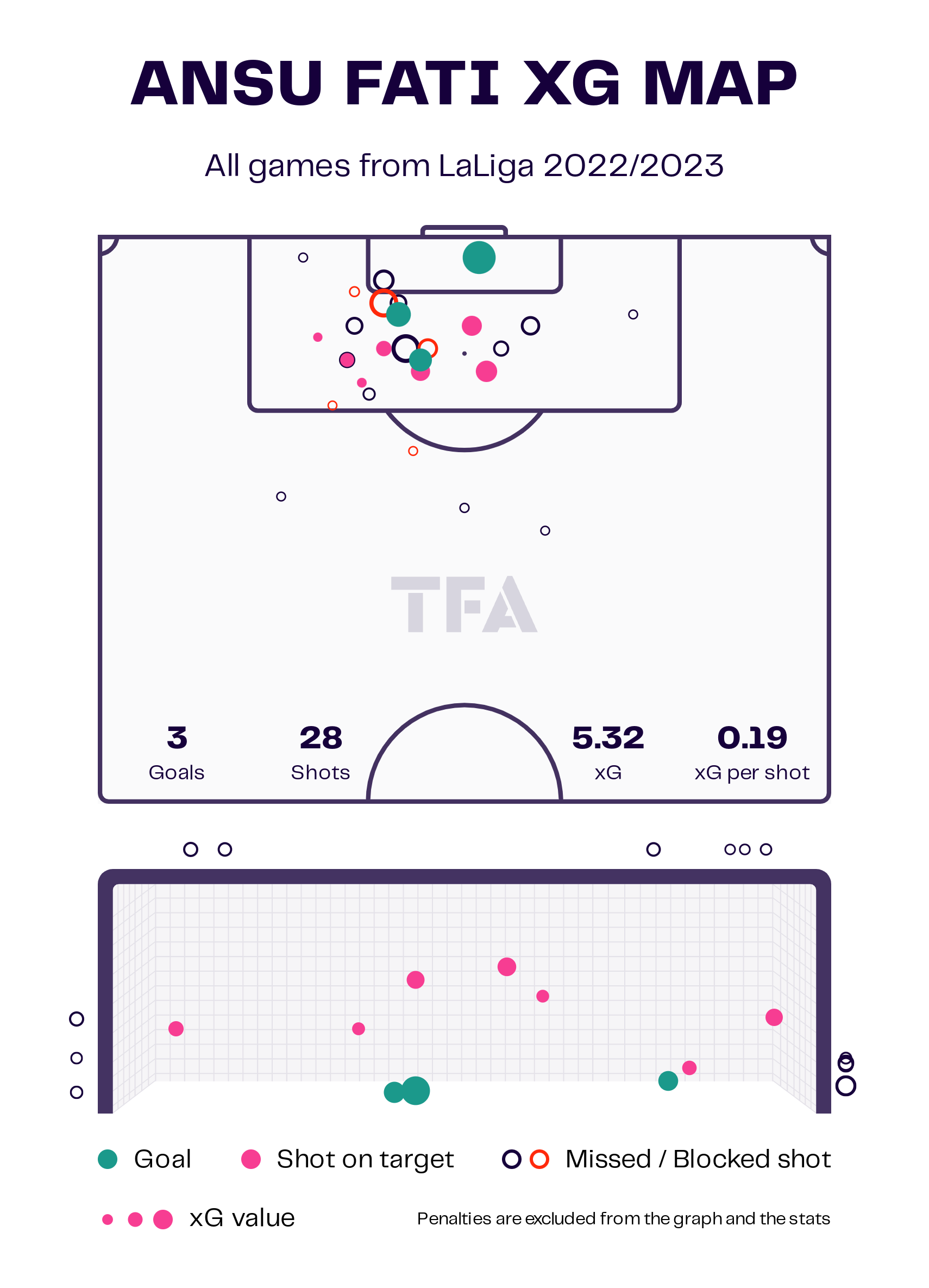 His ability to find goals and goal-scoring opportunities out of thin air is something very rarely seen. He has scored three goals this season in La Liga and has three assists to his name as well. Ansu Fati has played a total of 28 shots, with 24 of them inside the penalty box. Out of these 24, ten were on target. He also has a cumulative xG of 5.32 this season with an average xG of 0.92 per game. 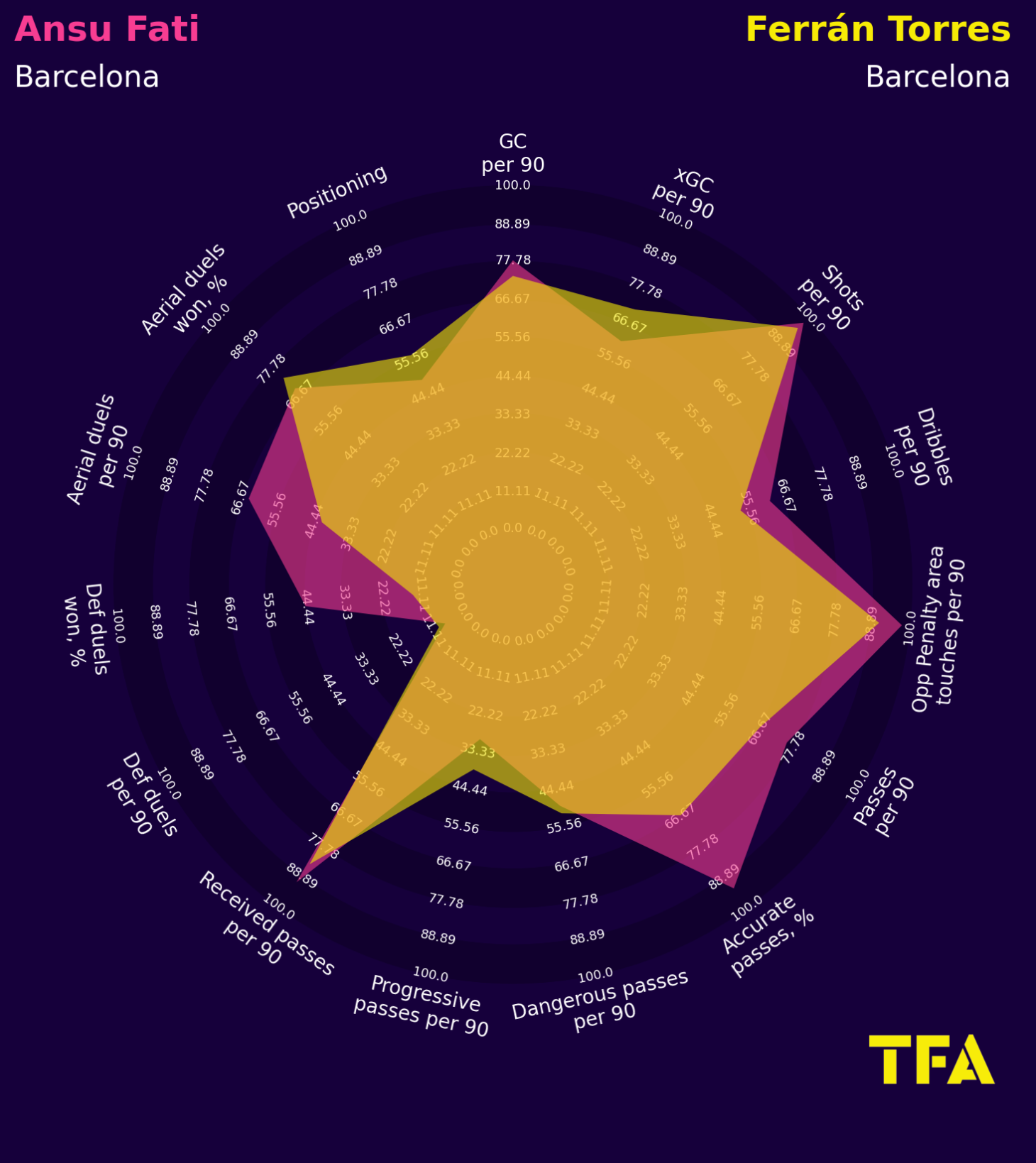 Xavi now seems to be preferring Ferran Torres over Ansu Fati to play as a starter on the left wing. Even though Ferran’s movement off the ball is really good, the sheer impact that Ansu brings with him cannot be overlooked for long. The above viz shows the comparison between the two players. Fati has an edge over Torres in a number of departments. Ansu Fati also poses a different threat to the goalpost whenever he comes, and he looks more apt at that position as he is a natural left winger. There is no doubt that Ansu Fati is on the way to recovering his best form, and the numbers will follow once he gets more playing time.

Ansu Fati was named the next big thing from La Masia and the successor to Lionel Messi. But injuries have made it difficult for Ansu Fati to feature regularly enough to create that impact yet. But this season, he has made a difference whenever he has stepped onto the field. If Ansu Fati can start producing the numbers more consistently, there will be no doubt that he will be unstoppable.

The young sensation has lived up to his standards, finally

Barcelona or Real Madrid: Who has the better build up to...

Barcelona could have a fight to retain La Liga this season