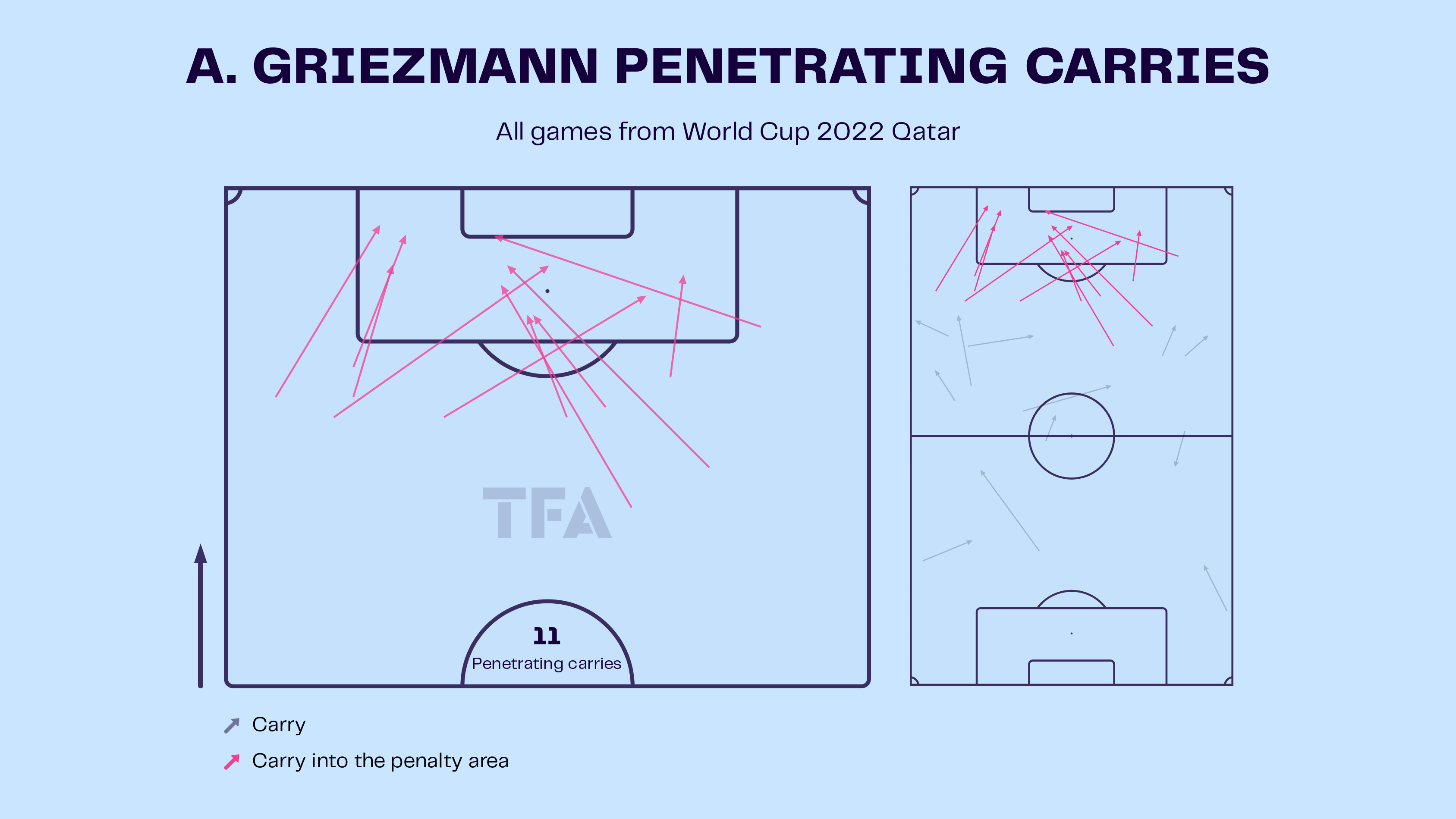 France have broken the World Cup curse by advancing to the round of 16, having won their first two matches. The chief architect behind their success is Antoine Griezmann, who has revived his form in a new role. Griezmann plays as an attacking midfielder for France and has taken it upon himself to be the source of creativity. He hasn’t scored yet in the World Cup, but the impact he has managed to create raises a question. Should Diego Simeone consider a change in position for Griezmann? His performance as an attacking midfielder encourages this change, which could prove to be season-defining for Atletico Madrid.

We take a look at some stats to understand why Antoine Griezmann at this moment is better suited as an attacking midfielder.

Griezmann usually plays as either an attacking midfielder or a centre-forward for Atletico Madrid in La Liga. However, when Didier Deschamps gave him a free role, it brought out the best in the Frenchman. The numbers only show one assist against his name, but the true story is much bigger than that. 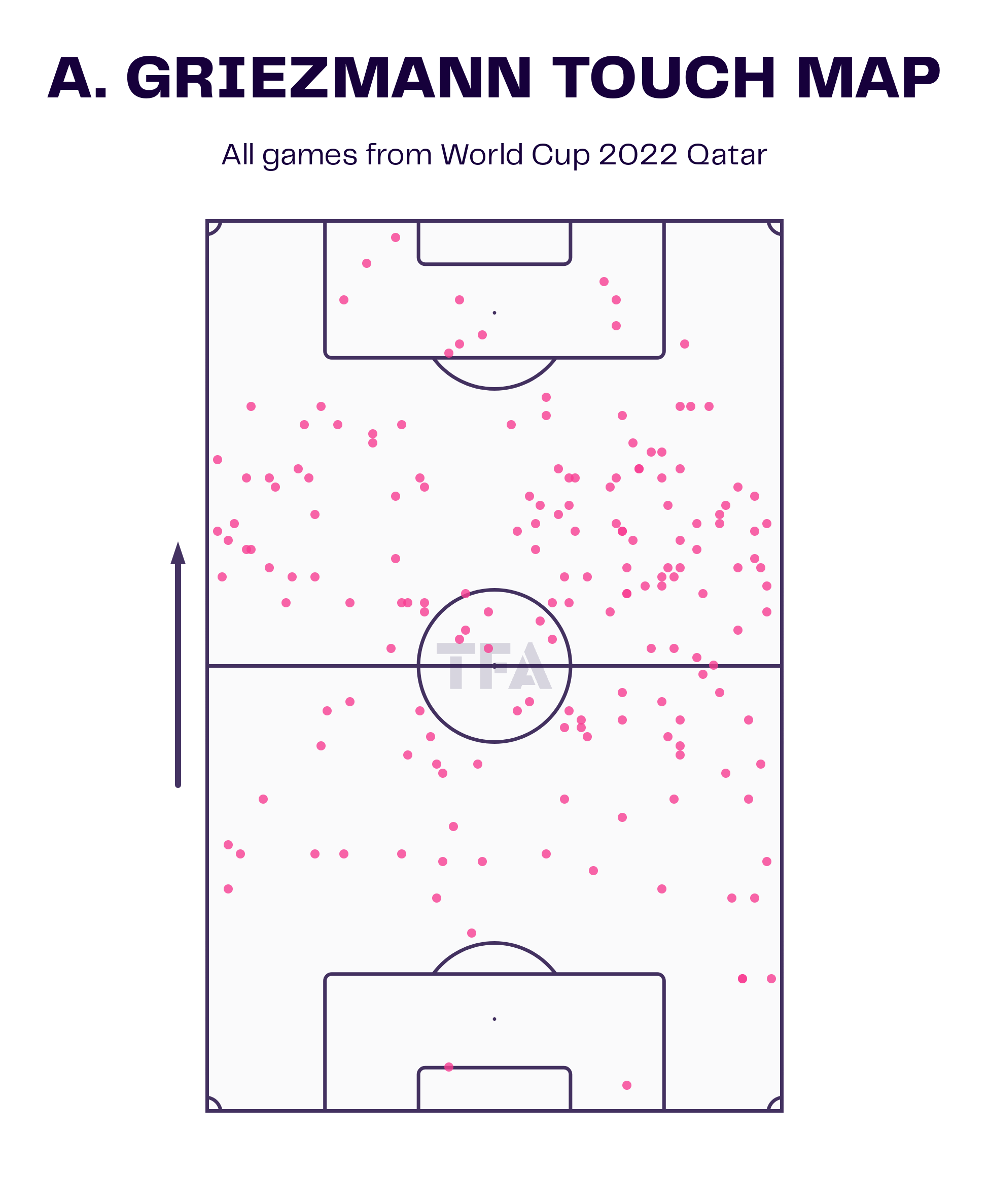 Griezmann has done well as an attacking midfielder and has covered a lot of ground for France. He comes deeper into the midfield to collect the ball and stitch a string of passes together. He sometimes starts the movement from the defensive third and, through a string of passes, turns it into an attack. The above visualisation depicts Antoine Griezmann’s World Cup touch map. We can observe how he covers most of the ground, including the opposition’s penalty area. He still has the attacking instinct and gets into the penalty box, where he averages 4.5 touches. 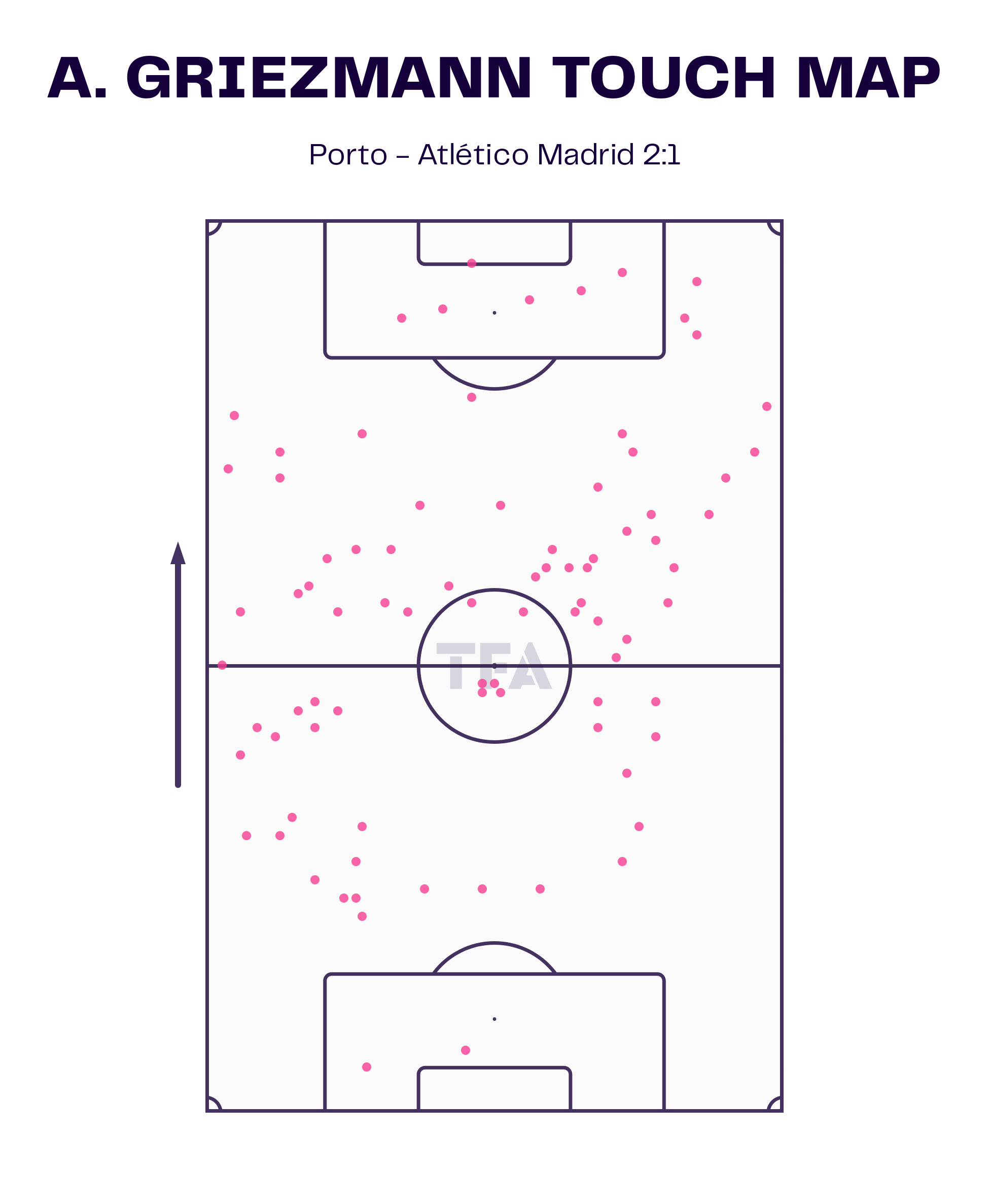 The above viz shows the touch map of Antoine Griezmann in the match against Porto in the Champions League when he played as a centre-forward. We can observe the difference between the two touch maps. When he plays as an attacking midfielder, he touches the ball more in the midfield and therefore can control the game more. 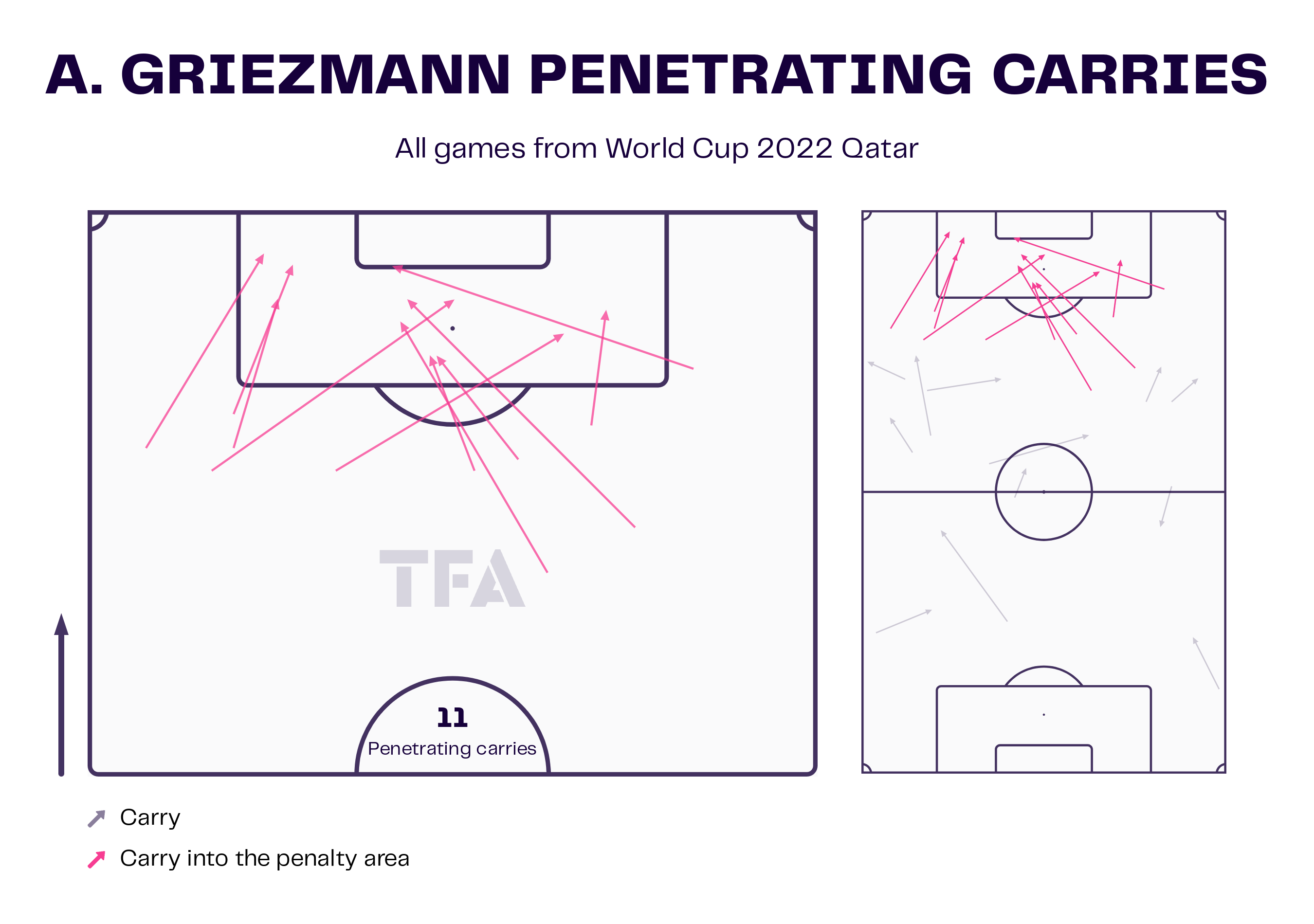 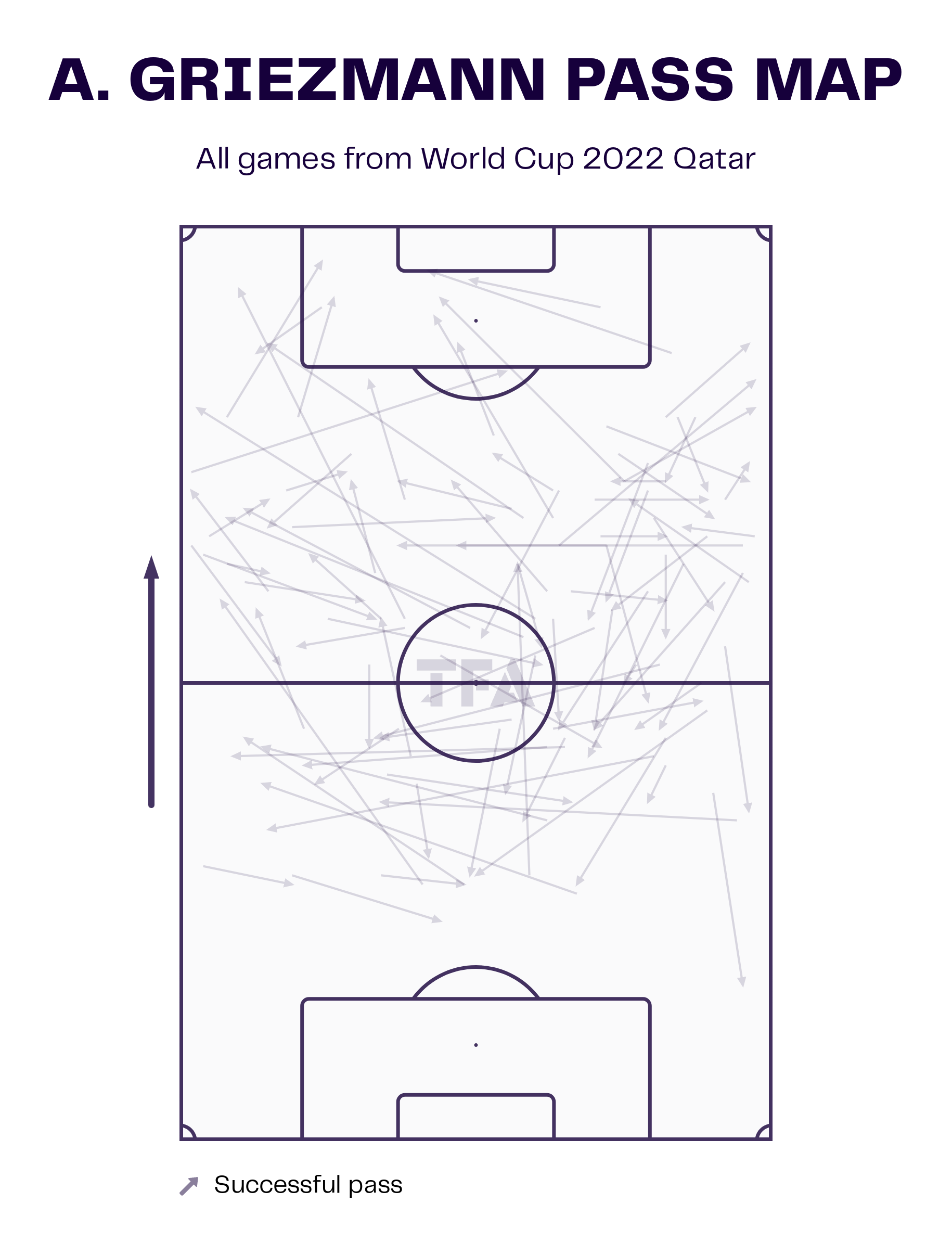 Passing is another area where Griezmann has excelled. He has an average passing accuracy of 86.5% in the World Cup. He plays quick one-touch passes with his teammates, which makes it hard for the opponents to mark. He also plays some good through balls and releases the likes of Mbappe and Dembele. Griezmann has played an average of seven passes into the final third this tournament and has a 79% success rate. The 31-year-old also passes the ball four times into the penalty box on average with 85% success. 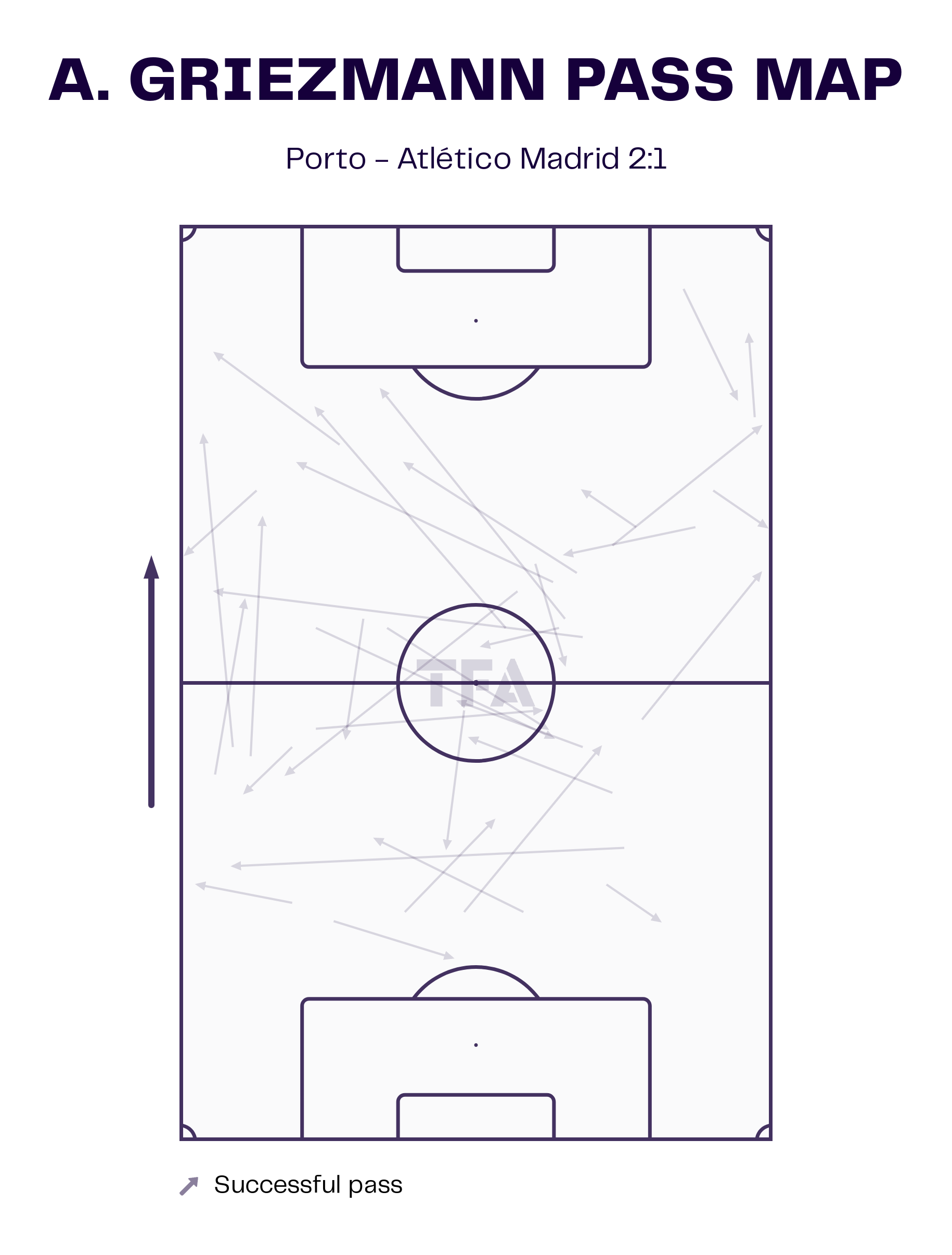 The above visualisation depicts Griezmann’s passing map against Porto in the Champions League. If we look at the difference between the two pass maps, we can observe how the passes are more forward when he plays as a midfielder. But when he plays as a centre forward, he has to play the ball either to the side or wait for other players to arrive. So, making Griezmann the focal point is surely an underutilization of his passing skills. 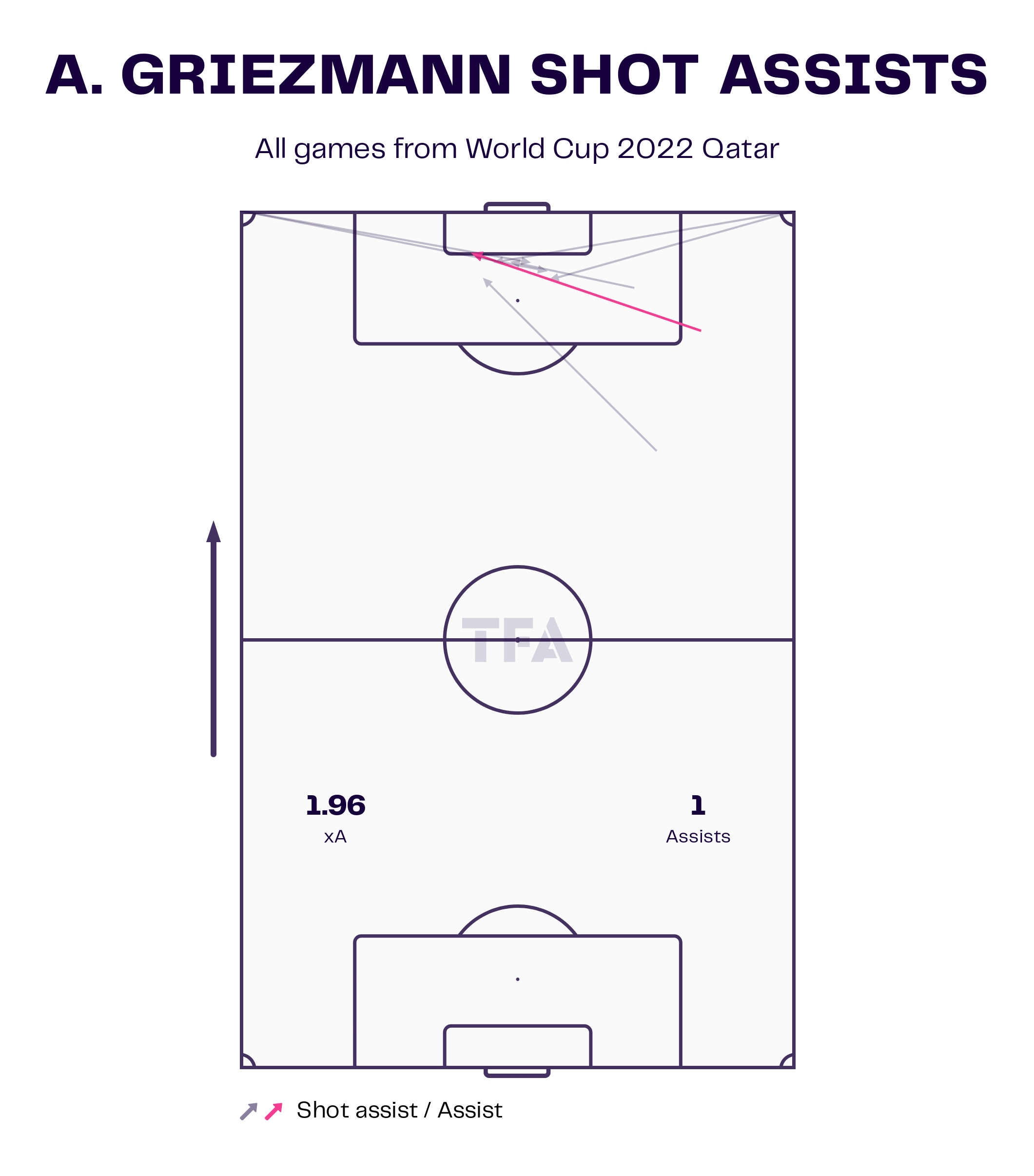 Antoine Griezmann has one assist to his name in two games in the World Cup so far and has been an integral part of the team. Griezmann takes almost all the set pieces for France and whips in good crosses from freekicks and corners. In the World Cup, he averaged 2.5 crosses per game with 75% accuracy.He also averaged 1.46 crosses per game for Atletico when he played as an attacking midfielder. The 31-year-old has an average of 2.19 shot assists per game when he plays as an attacking midfielder. This stat drops to 1.1 when he plays on the wing.

Antoine Griezmann has reached a stage in his career where a lot of wingers turn into midfielders as their pace decreases a bit with age. They can orchestrate the game from the middle of the field with much more precision and accuracy. Especially with players like Joao Felix on the wing, playing Griezmann as a midfielder could help Atletico, as they lack creativity in the middle of the park.