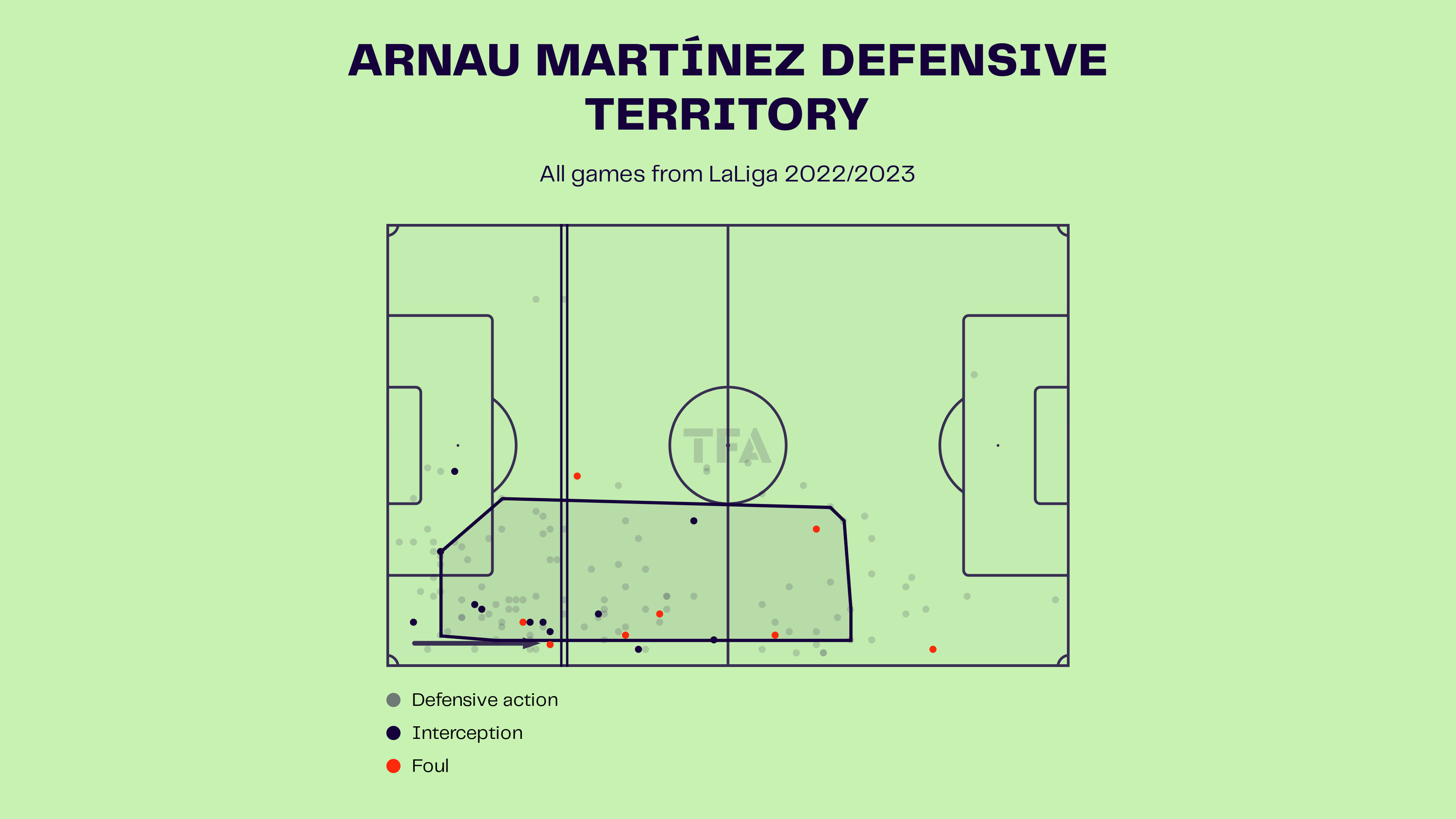 Girona has produced some highly talented players in the past who have done well in La Liga. A new name to that list is the 19-year-old Arnau Martinez. The teenager who plays as a right-back is deemed to be a top talent, and word has it that many big clubs have their tabs on him. The youngster, who started his career at Barcelona’s La Masia, can play both as a central defender and as a right-back. He has drawn comparisons to the legendary figure of Javier Mascherano and is called “the little boss.” The youngster has been impressive for Girona and is a regular starter for Girona. Therefore, we take a look at his stats to understand the game style of Arnau Martinez.

Arnau Martinez made 12 appearances in La Liga this season, starting 11 and coming on as a substitute in one match. He has scored two goals and assisted one as well. 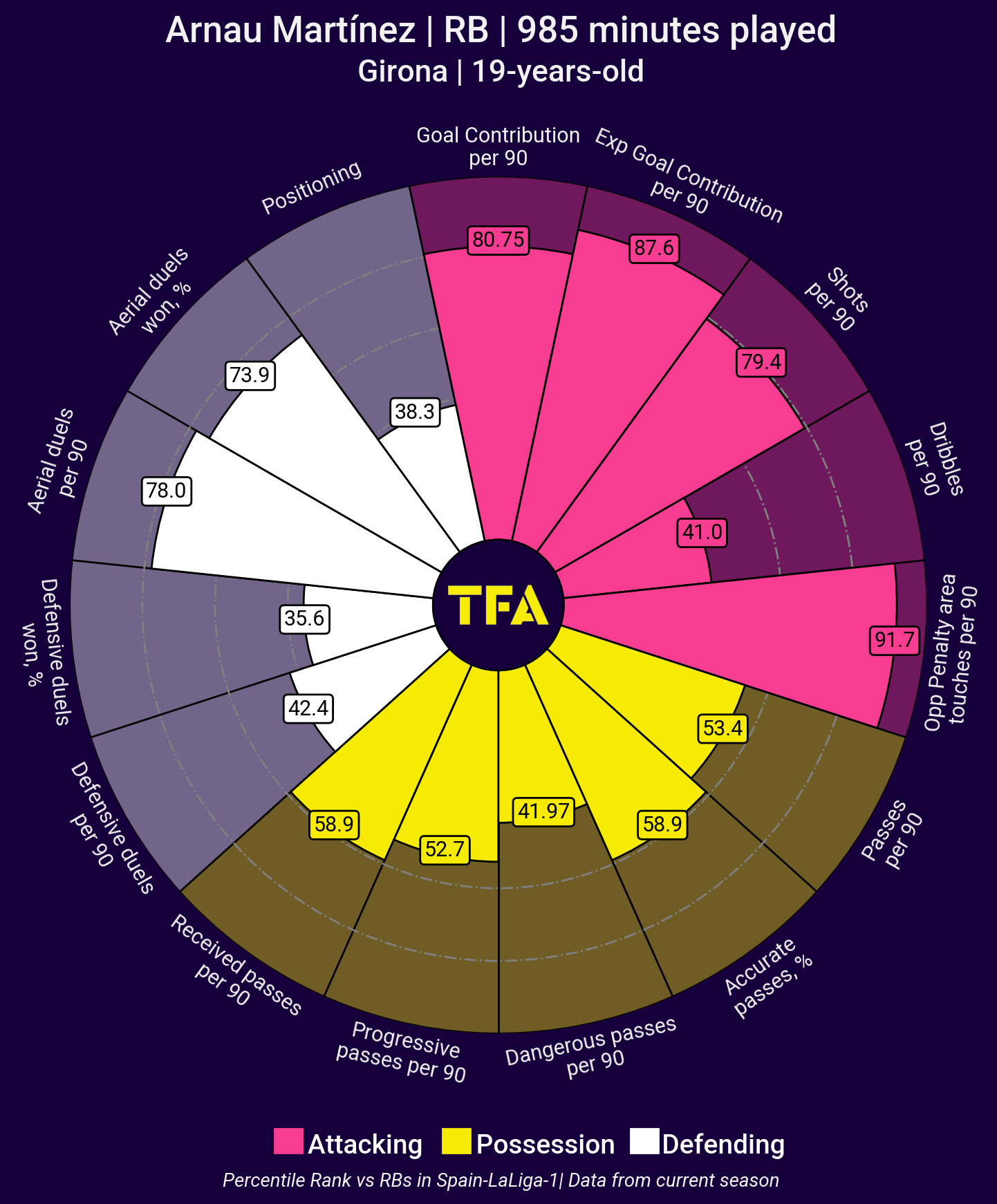 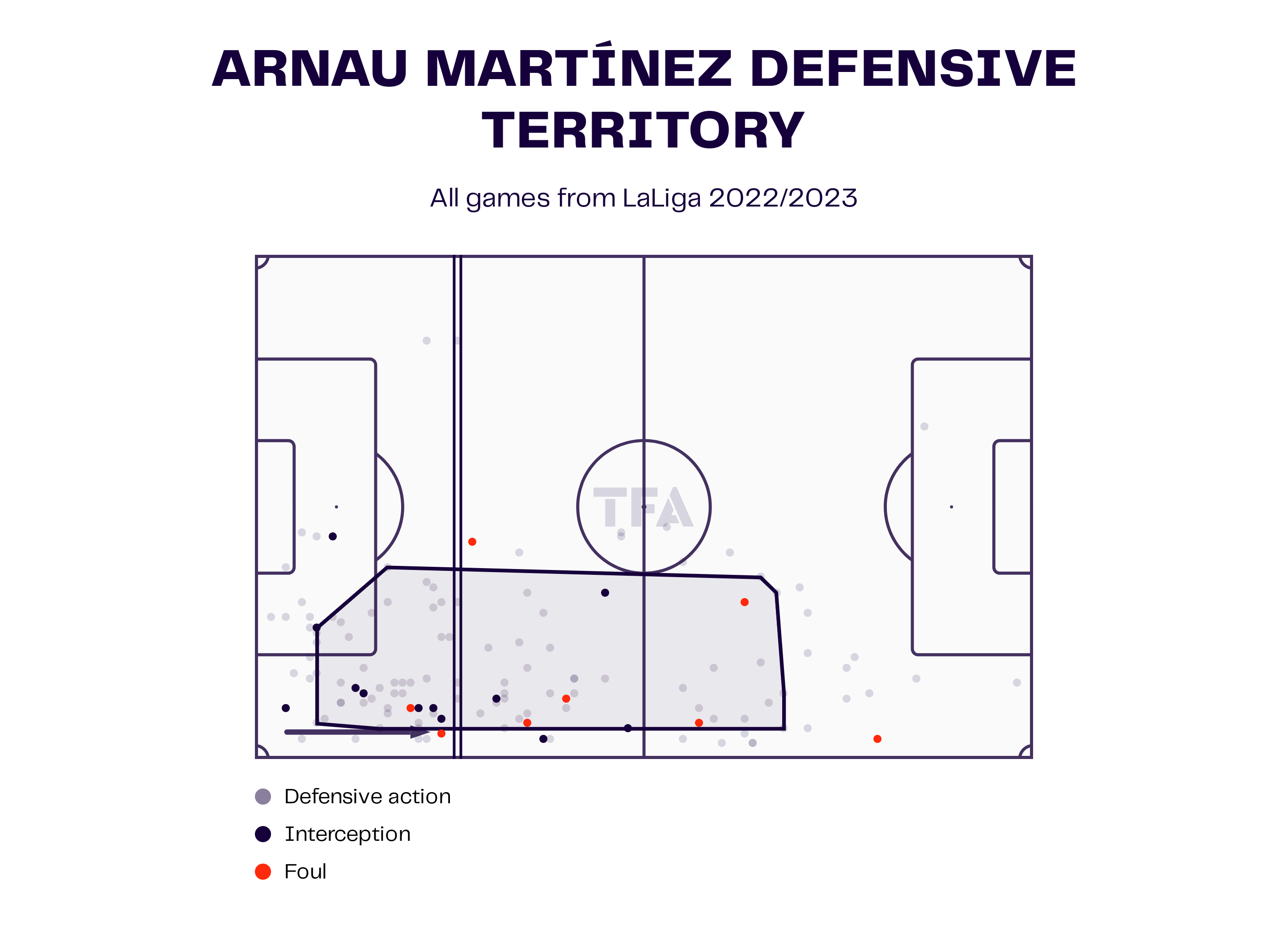 The above visual shows Arnau Martinez’s defensive territory. The 19-year-old, who plays as a right back, is good defensively and overlaps well too. He makes around 6.4 defensive duels per game with a success rate of 57.1%. Martinez also makes around 2.56 aerial duels per game with a success rate of 57.1%. The teenager is fast and has good defensive awareness as well. Apart from the duels, Martinez also makes around 3.29 interceptions per game. His performance for Girona, especially against Real Madrid when he stopped Vinicius Jr., caught many eyes. 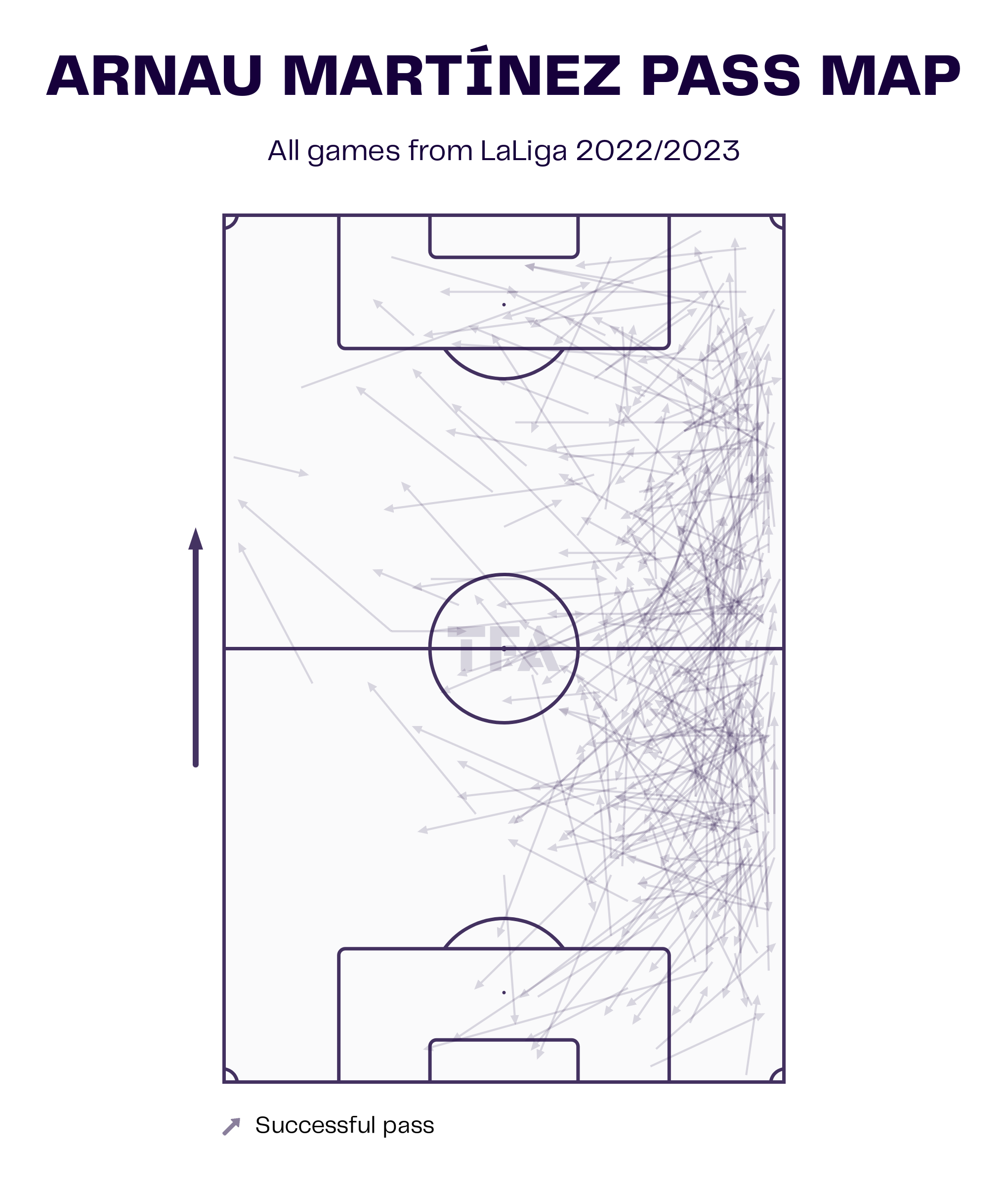 Arnau Martinez excels in passing as a former La Masia graduate. With a passing accuracy of 81.8%, Arnau Martinez is a good passer of the ball. He makes around 39.11 passes per game and combines well with other players. As he is an attacking full-back, he overlaps quite often and plays an average of 3.29 passes into the final third per game with an accuracy of 86.1%. He also plays around 2.38 passes into the penalty area with 57.7% accuracy. 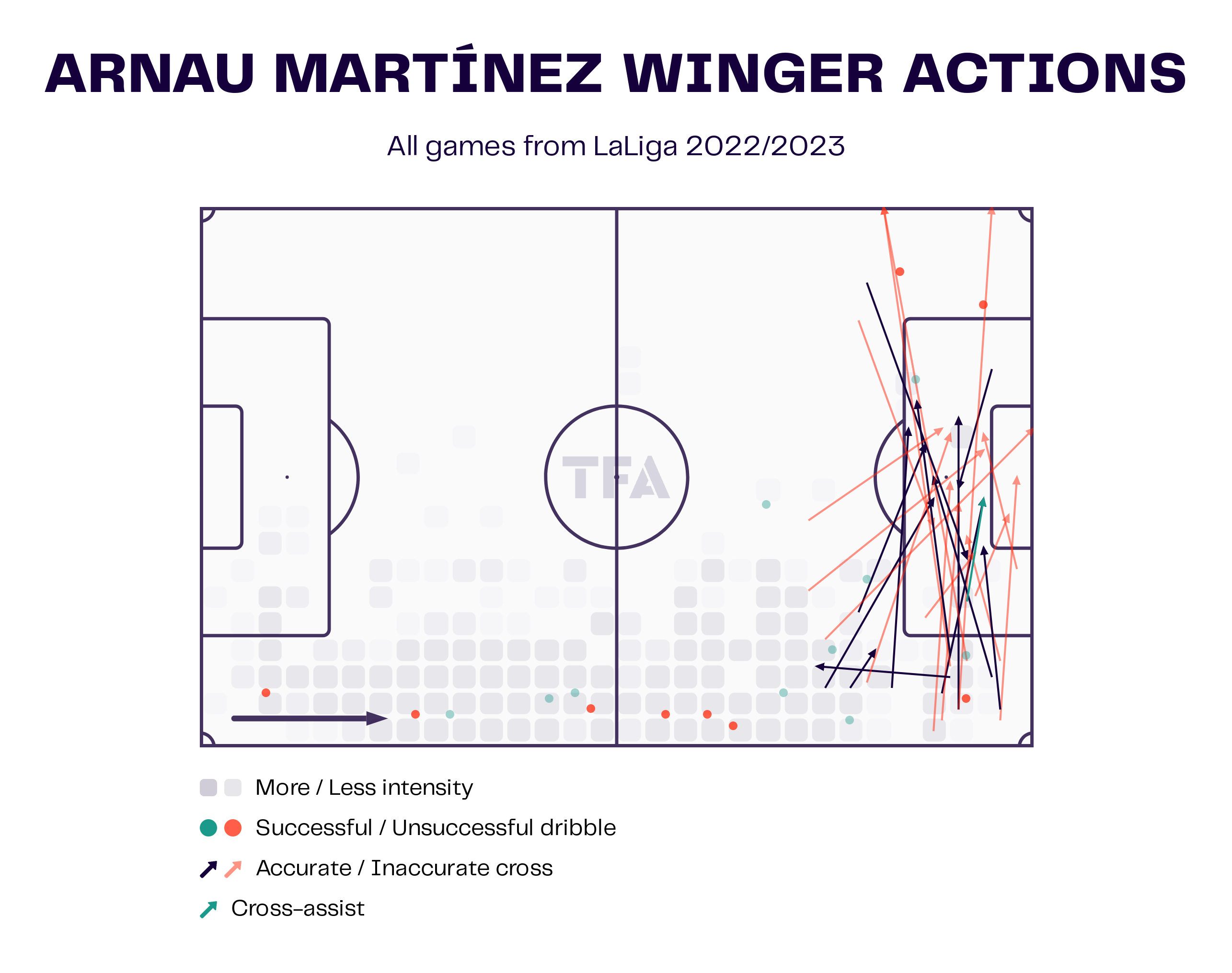 Arnau Martinez is an attacking right-back who likes to get forward and contribute towards the attacking game. The above visual shows his actions as a winger or when he occupies the position of a winger. He averages 2.83 crosses per game and has a 41.9% accuracy rate. Martinez is also not shy about getting into the box himself. He averages 2.19 touches in the penalty area and has two goals to his name as well. 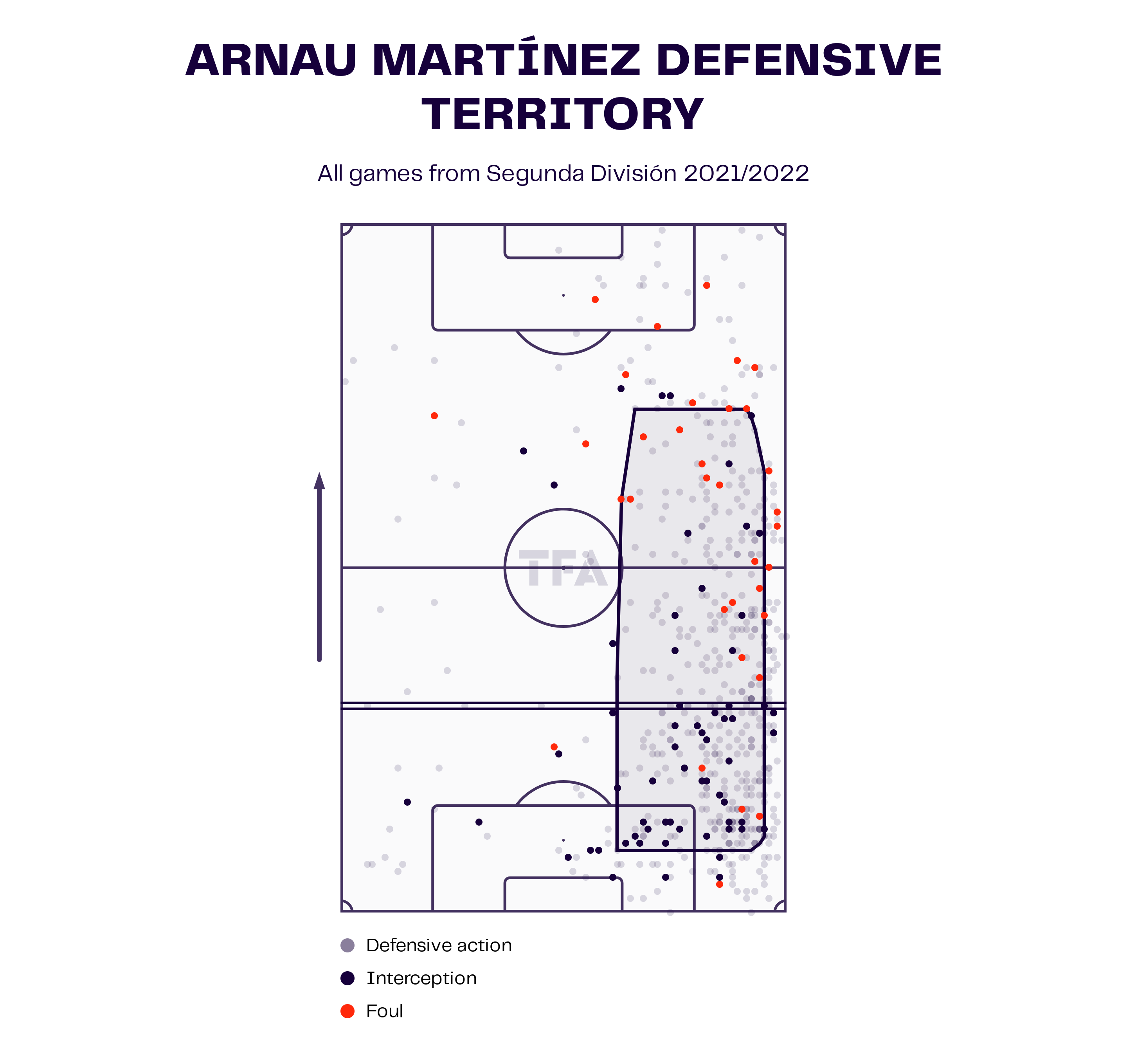 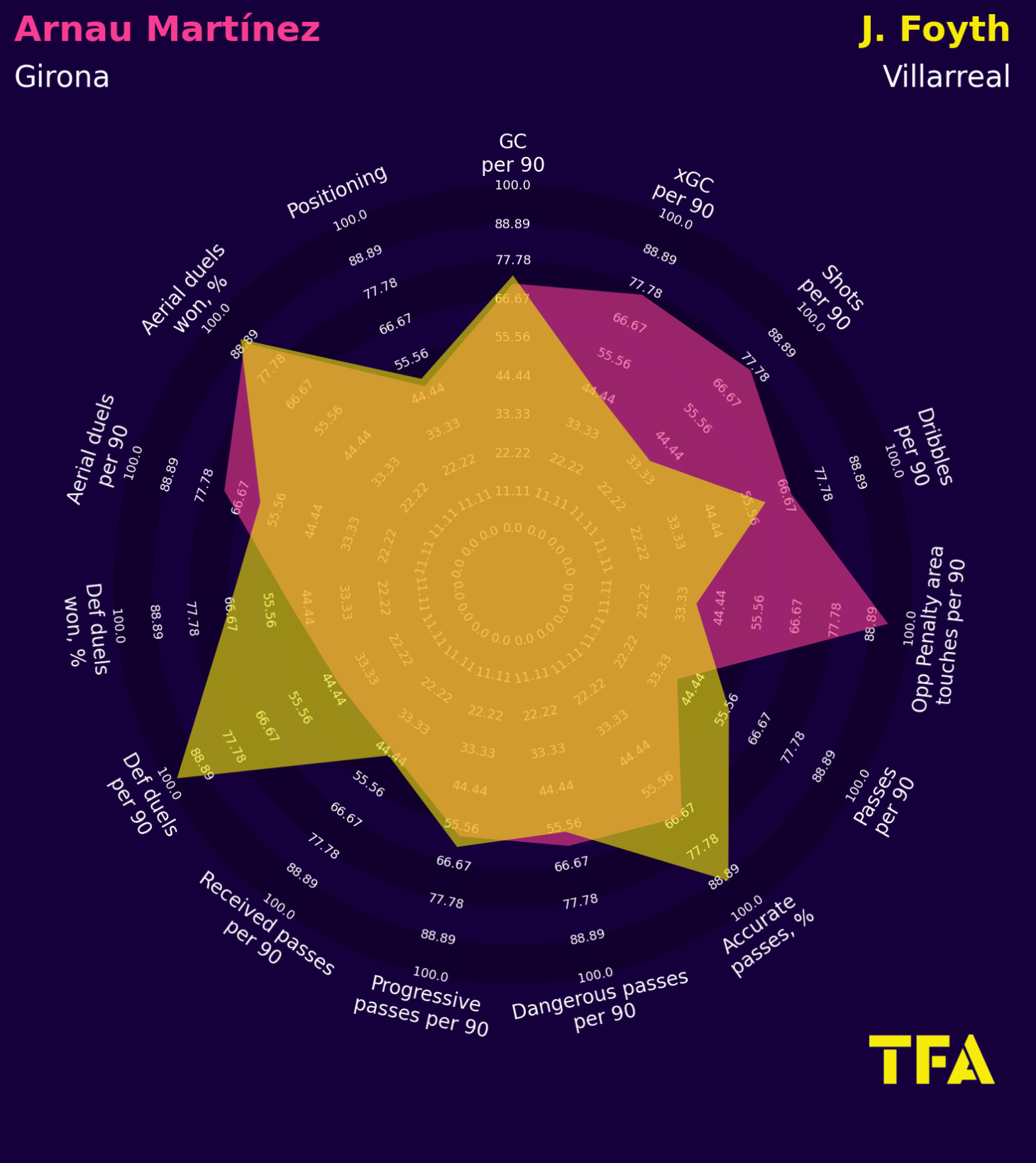 The above visual compares the radars of Arnau Martinez and Juan Foyth. Both are young right-backs who are deemed to be two of the best talents in that position. Statistically, Foyth has a better record than Martinez in defensive duels, passes, and positioning, while Martinez gets the upper hand in aerial duels, goal contributions, shots, dribbles, and entry into the opposition’s penalty area. Both players have been impressive for their respective clubs and have managed to gain a good reputation for themselves.

Arnau Martinez is one of the brightest spots in La Liga in the right-back position. With the youngster’s speed, defensive awareness, and attacking qualities, he makes an ideal candidate for the spot. If he keeps up his performance, it won’t be long before a big club comes fishing for him.

Barcelona struggle but weather the storm in Leon

How Real Betis can make the next big step