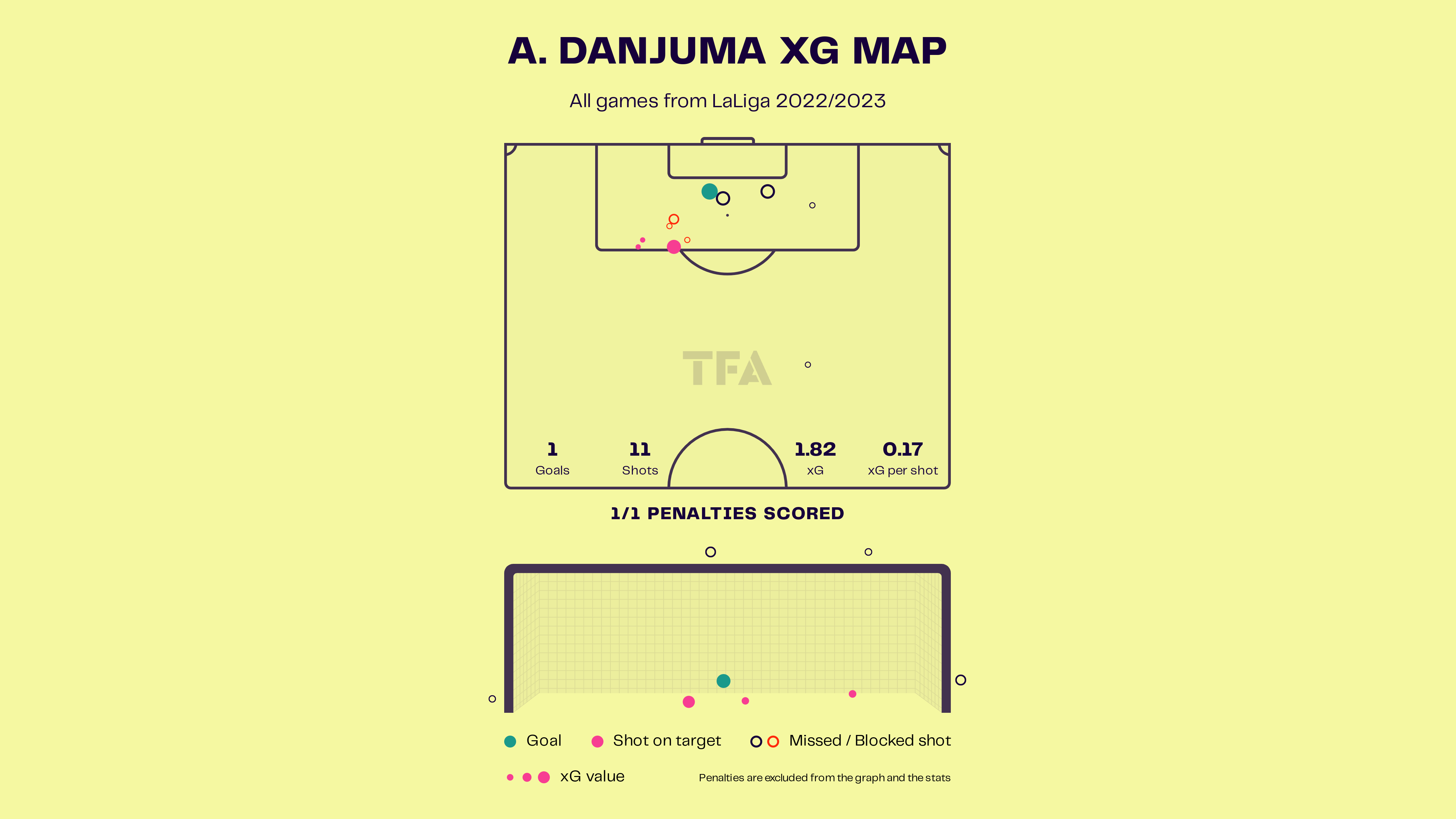 Villarreal have produced many talented young players in the recent past. One of the best talents they have is the 25-year-old forward Arnaut Danjuma. The Dutch International was on the radar of many English clubs, and for good reason. The 25-year-old has had two good seasons with Villarreal after arriving from Bournemouth. Last season, he racked up a total of 16 goals in all competitions. He has scored six goals this season already, including two in La Liga, and is looking in good touch as well. As per the latest reports, the dashing forward has agreed to sign for Tottenham Hotspur. Therefore, we take a look at his stats to understand why some Premier League clubs were behind the 25-year-old forward.

Arnaut Danjuma has made ten appearances this season, starting six of them and coming off the bench in four of them. However, he has not been able to produce numbers like last year. 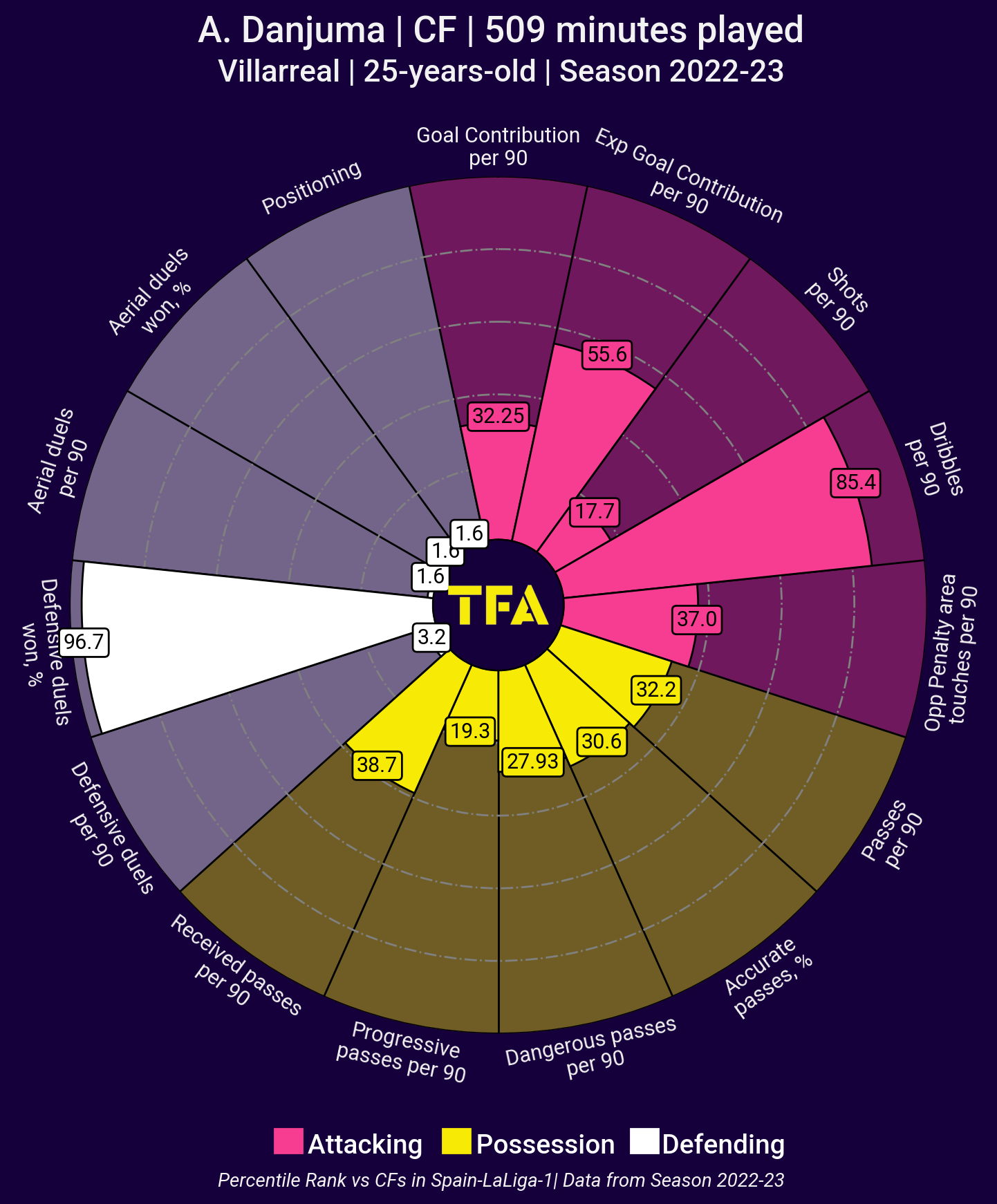 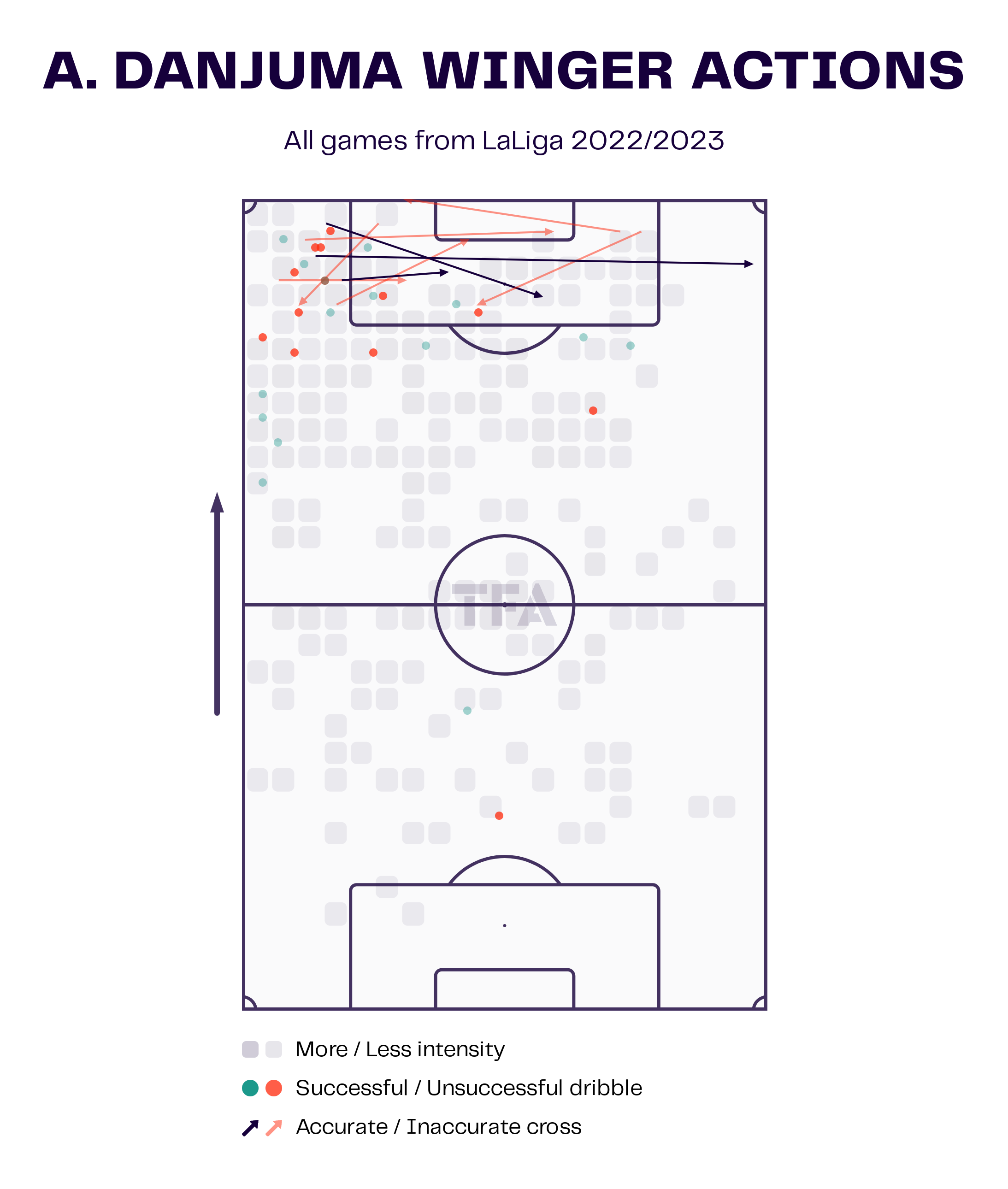 The visual above shows Arnaut Danjuma’s actions as a winger. He can play either as a centre-forward or as a winger. When he plays as a winger, he doesn’t hesitate to take on players or to play crosses into the box. This season, Danjuma has taken part in an average of 9.19 offensive duels per game with 45.3% success. He also plays around 1.56 crosses per game with a 33.3% success rate. 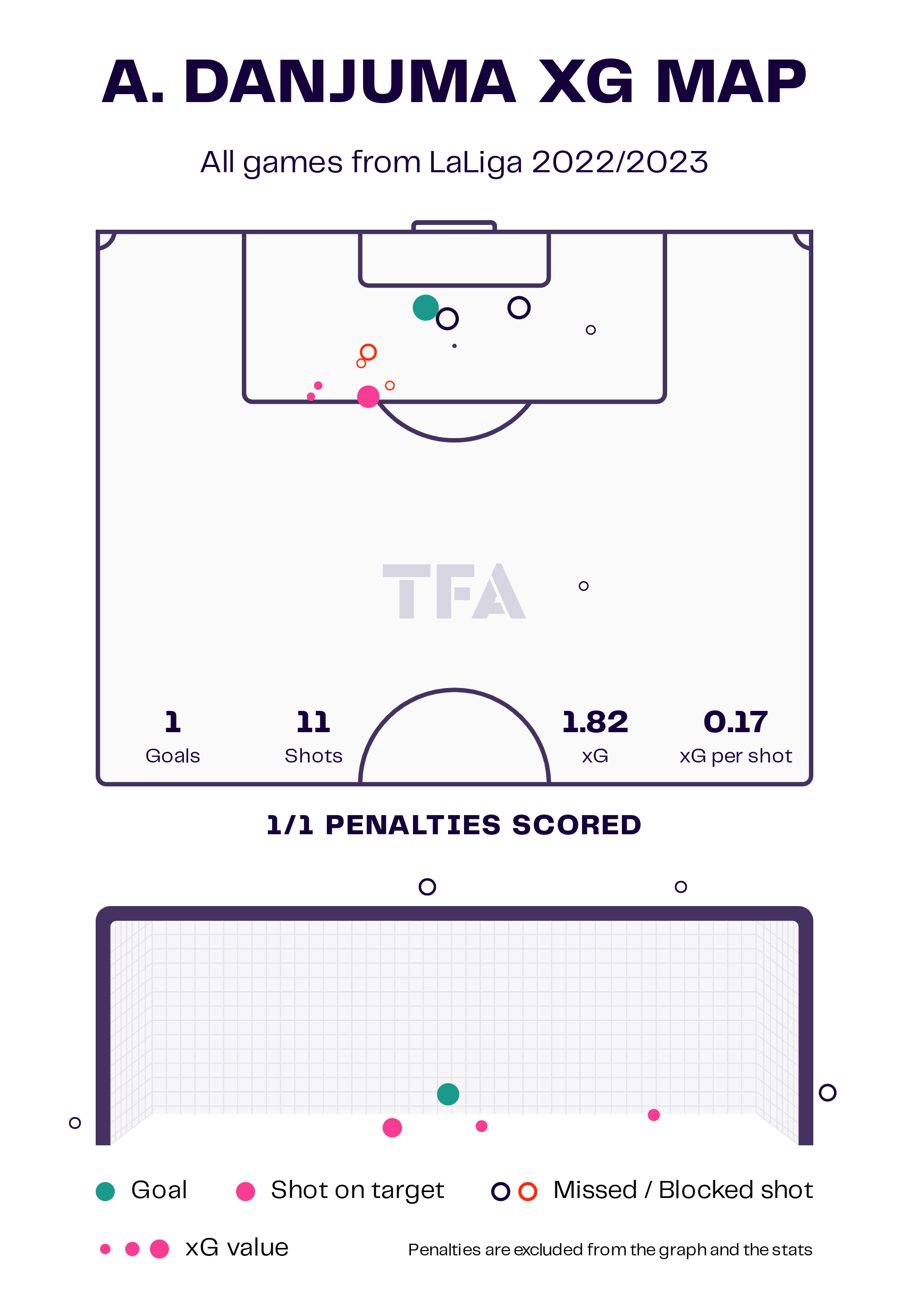 Arnaut Danjuma has only scored two goals in La Liga this season, one from open play and one from the penalty spot. He has taken 11 shots, for an average of 2.08 shots per game. Out of the 11 shots, only four were on target. His shooting stats have taken a dip from last season. Last season, Danjuma scored ten goals in La Liga with an average of 3.3 shots per game. His shooting accuracy has also declined from 46.6% last year to 41.7% this year. 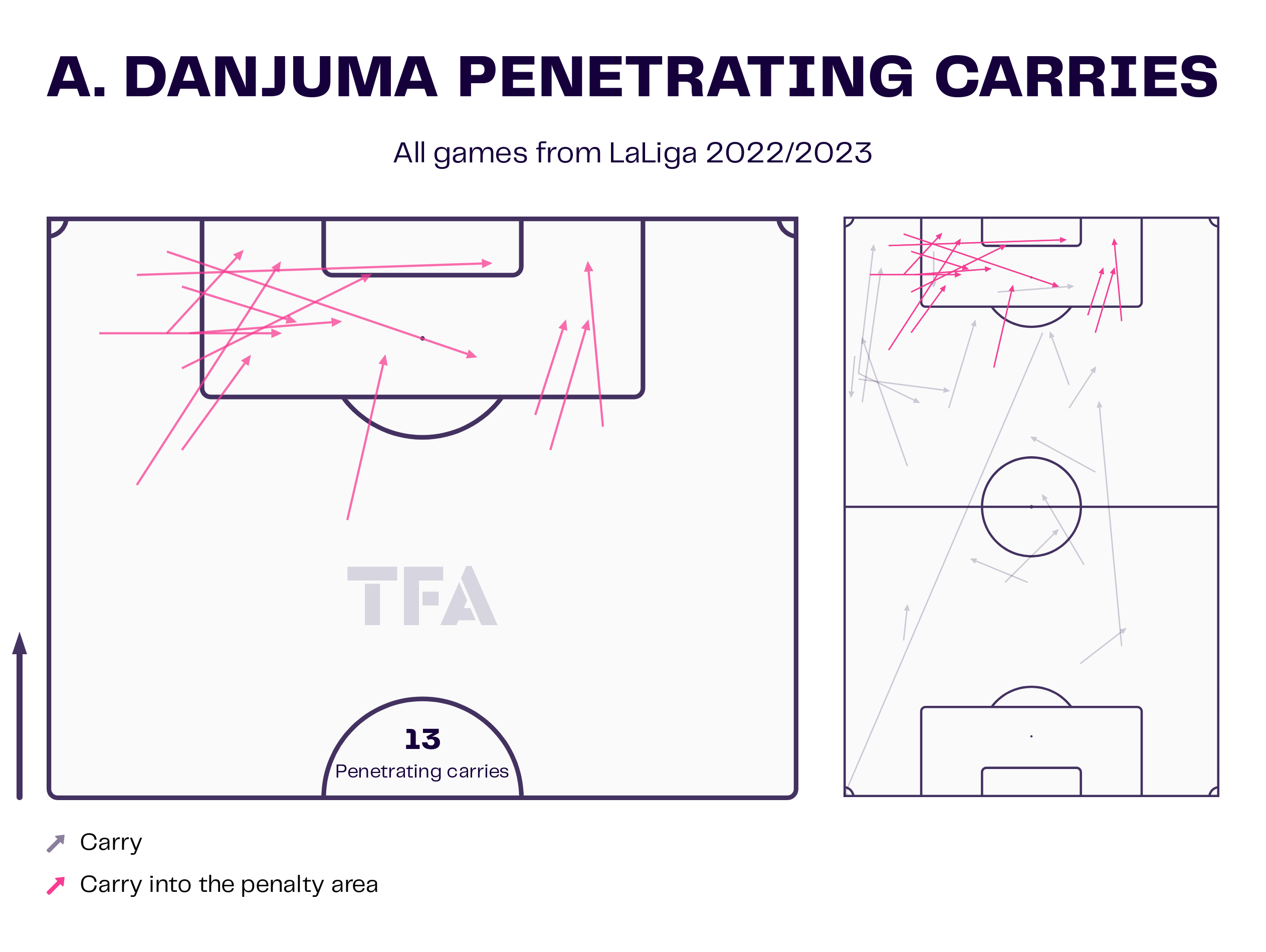 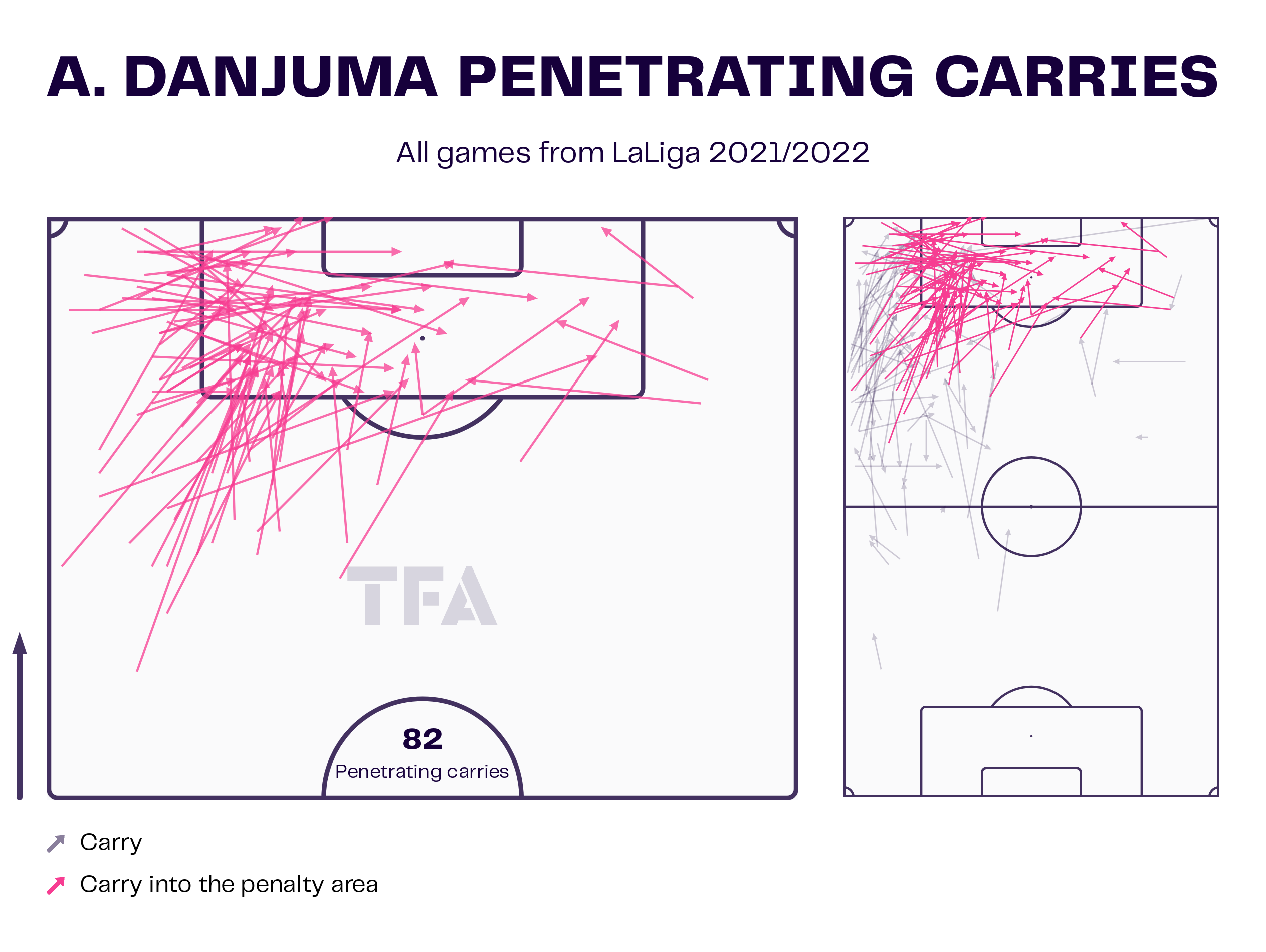 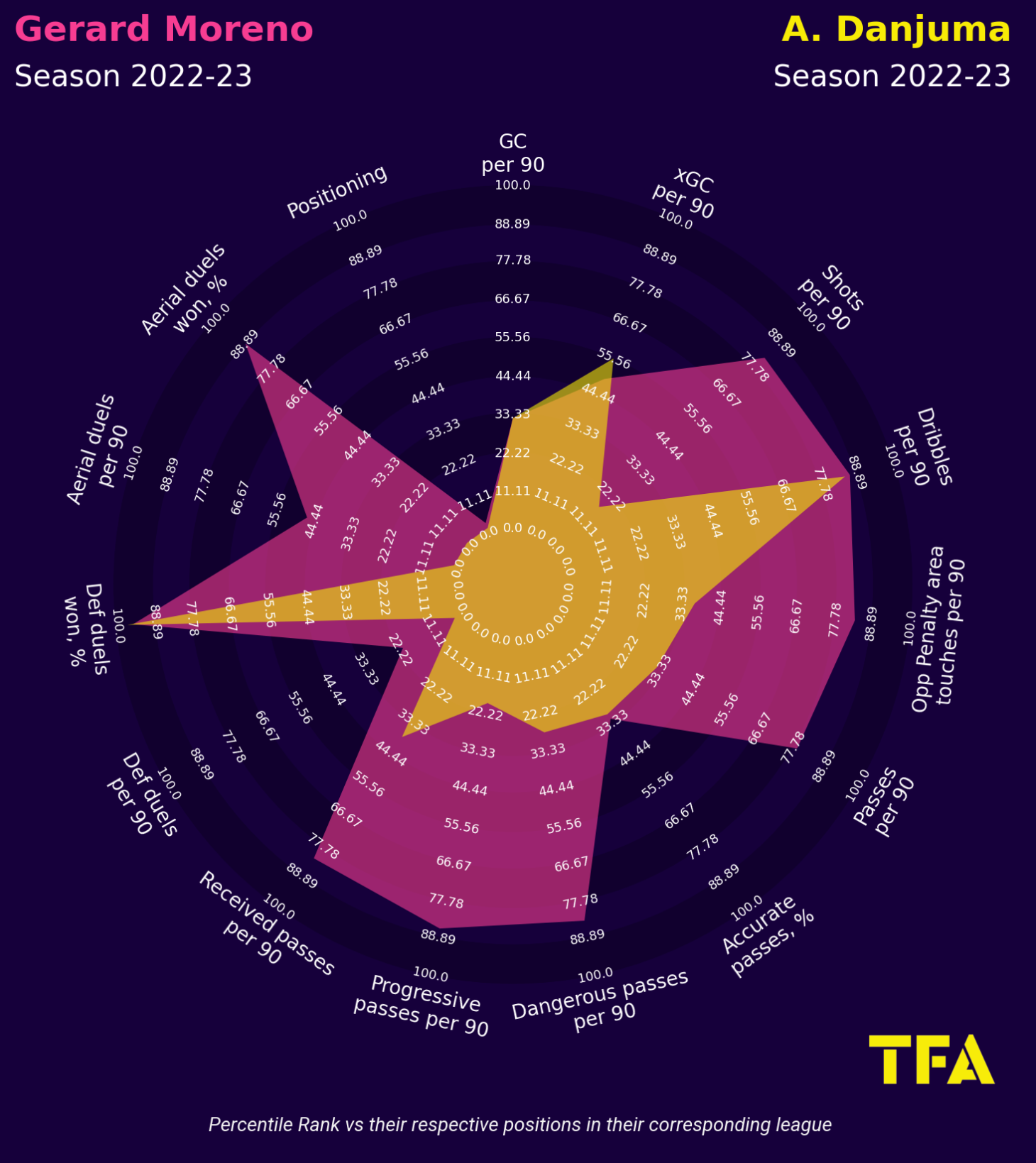 Since the reports suggest that he has agreed to move to North London, his inclusion could make Tottenham Hotspur’s odds slightly better. Looking at the 1×2 market, his presence in the starting eleven is likely to take their odds a bit higher due to the attacking threat he poses. At the same time, the over lines could slightly go up, but considering his form, it is not expected to undergo a big change.

Arnaut Danjuma impressed everyone in his first season at Villarreal and scored many goals. Even though he has not managed to score as many goals this season, there is no doubt about the quality he possesses. He could prove to be the answer to Tottenham’s worries, as the 25-year-old is capable of posing a threat to any defensive line on his day.

‘A cut above anyone’- Real Madrid have to keep De Bruyne...

“It’s difficult”: Griezmann must improve “connection” with this Barca player and...

What happens after the season ending injury to Marco Asensio ?