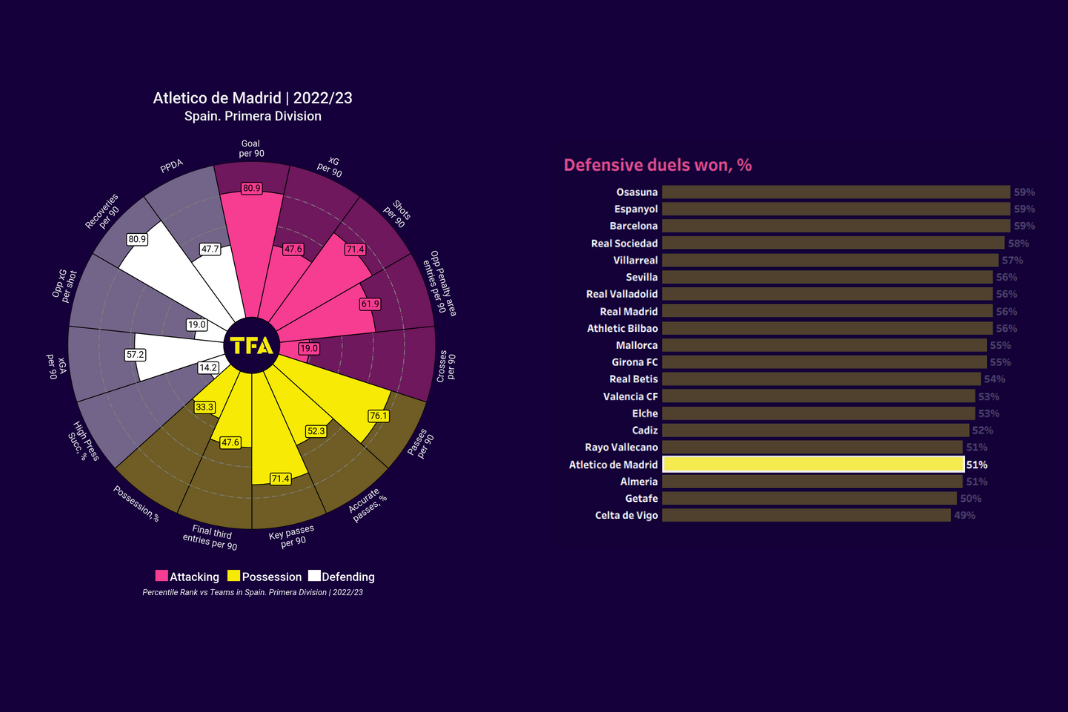 Atletico de Madrid is having a poor run as they have been knocked out of the UEFA Champions League and have failed to even qualify for the UEFA Europa League. They won only one of their group matches, drew two, and lost three. They scored only five goals while conceding nine. Diego Simeone’s team has not tasted victory in their last three La Liga matches either. With the loss to Mallorca last week, Atletico Madrid dropped to fifth place in the table after losing to Mallorca last week. We take a look at some stats to understand the reason behind Atletico Madrid’s slump in form. 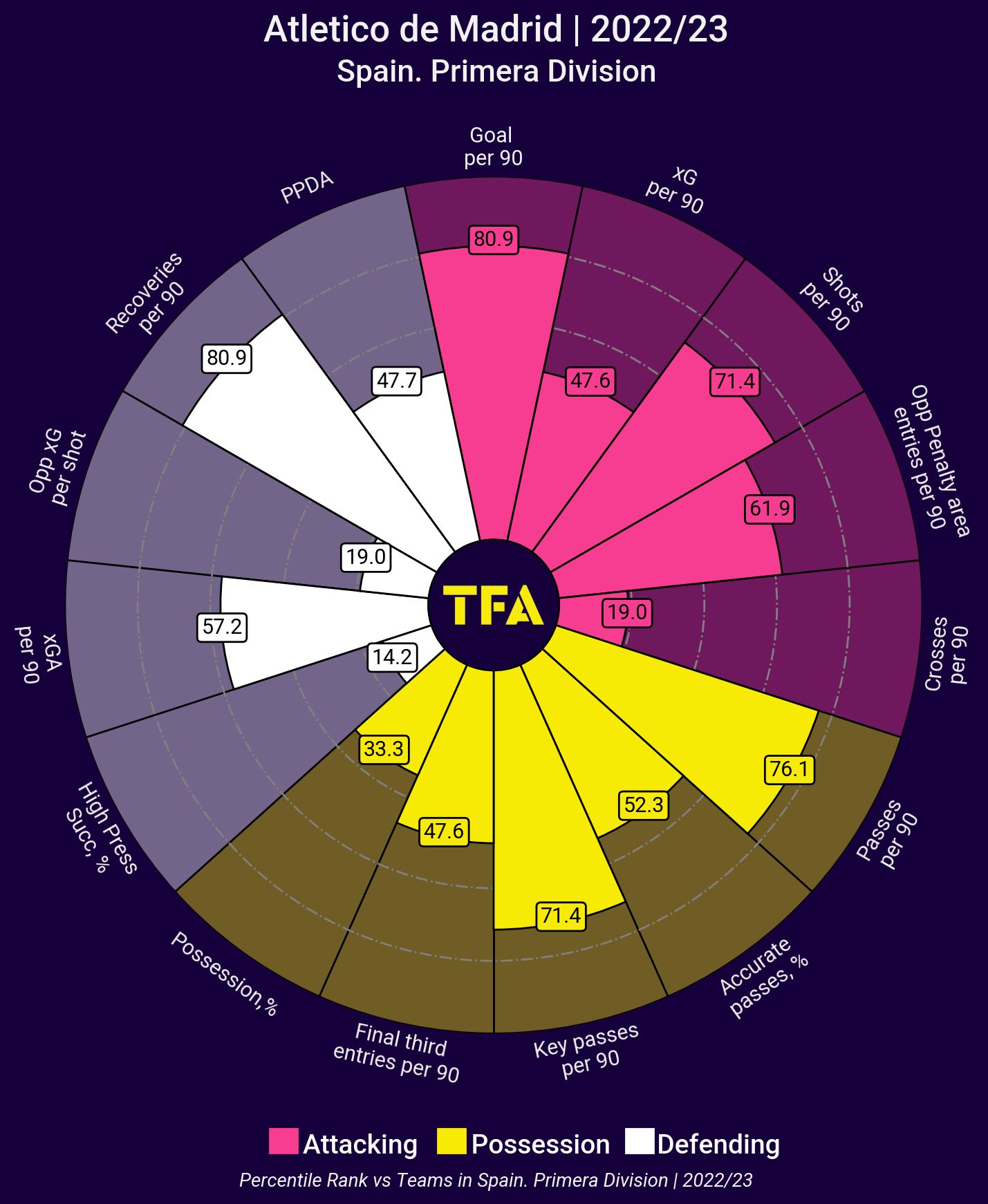 Atletico Madrid have had a poor run recently, and a part of the blame naturally goes to their attack. They scored just five goals in the UEFA Champions League this season and conceded nine. They had their chances but couldn’t finish those chances properly. They have only themselves to blame for the missed opportunities that have returned to haunt them. Atletico Madrid have scored 21 goals in La Liga this season but has failed to find the finishing touch recently. They had 90 shots in the last five matches, with 36 of them on target. But still, they could find the back of the net only six times.

In their last La Liga match, they had 18 shots against Mallorca, with six of them on target, but couldn’t finish any of them. Alvaro Morata had some chances, but some good saves from the Mallorca goalkeeper kept them out. 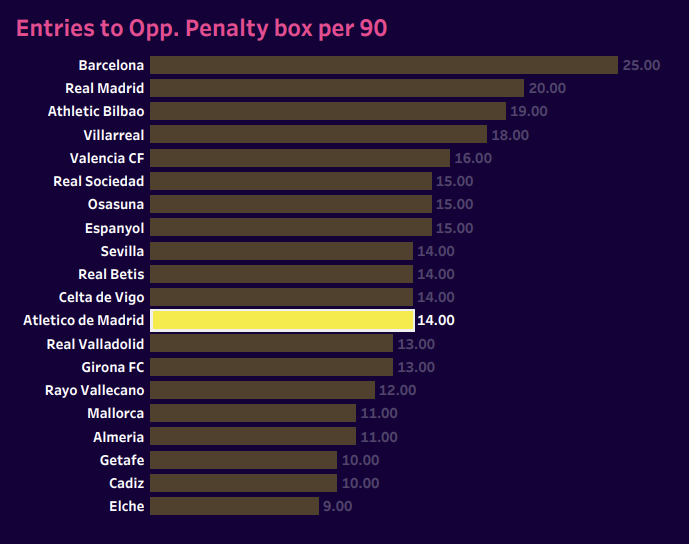 As the pizza chart suggests, they are only in the top 61.9 percentile of entries into the opponent’s penalty area. They have one of the worst stats for the teams in the top six in La Liga when it comes to entry into the opponent’s penalty box. They average 14 penalties per game, while table-topper Barcelona averages 25. They make around 29 positional attacks per game, with only 27.7% of them leading to shots, of which only 40% have been on target. They will have to make sure they somehow find their finishing form back, as all the missed chances have cost them dearly so far.

If Atletico de Madrid’s attack has been found lacking in recent matches, their defence has not been very different either. They conceded nine goals in the Champions League this season and 14 in La Liga. The best example of their poor defensive performance was in their match against Cadiz, when they conceded a goal in the 99th minute. There was no defender to stop the cross coming in from the right wing. This is not the only story of defensive errors from Atletico Madrid.

One of the most worrying things for Simeone would be how easily Atletico players gave the ball away. The above viz shows the losses in the match against Porto in the UEFA Champions League. They lost the ball many times in the midfield and near their penalty box. Porto players took advantage of that and launched many attacks on them. They were lucky to only concede two goals in that game. 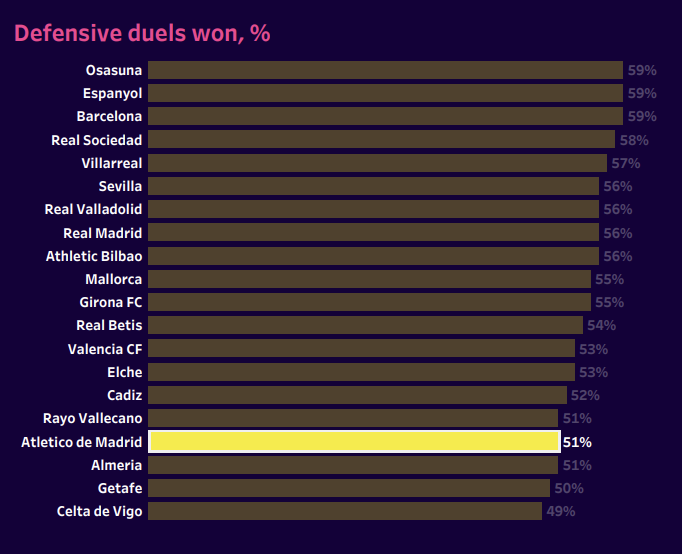 Atletico Madrid have one of the worst success rates in defensive duels in La Liga. They have 51% success in defensive duels, and attackers have found it too easy to go past their defenders. They have conceded 23 goals this season in La Liga and the Champions League, with nine of them coming in the last five matches. They also have a very poor stat for the number of interceptions made per game. They make an average of 42 interceptions per game and concede an average of 0.96 goals per game.

Atletico Madrid have found themselves in a very tricky situation at the moment, and no one seems to have any answers to these problems. The World Cup could not have come at a more perfect time for Diego Simeone’s camp, as this would give them enough time to reflect on what needs to be done to turn their fortunes around.

The Data: Espino salvages point for Cadiz in draw with Levante