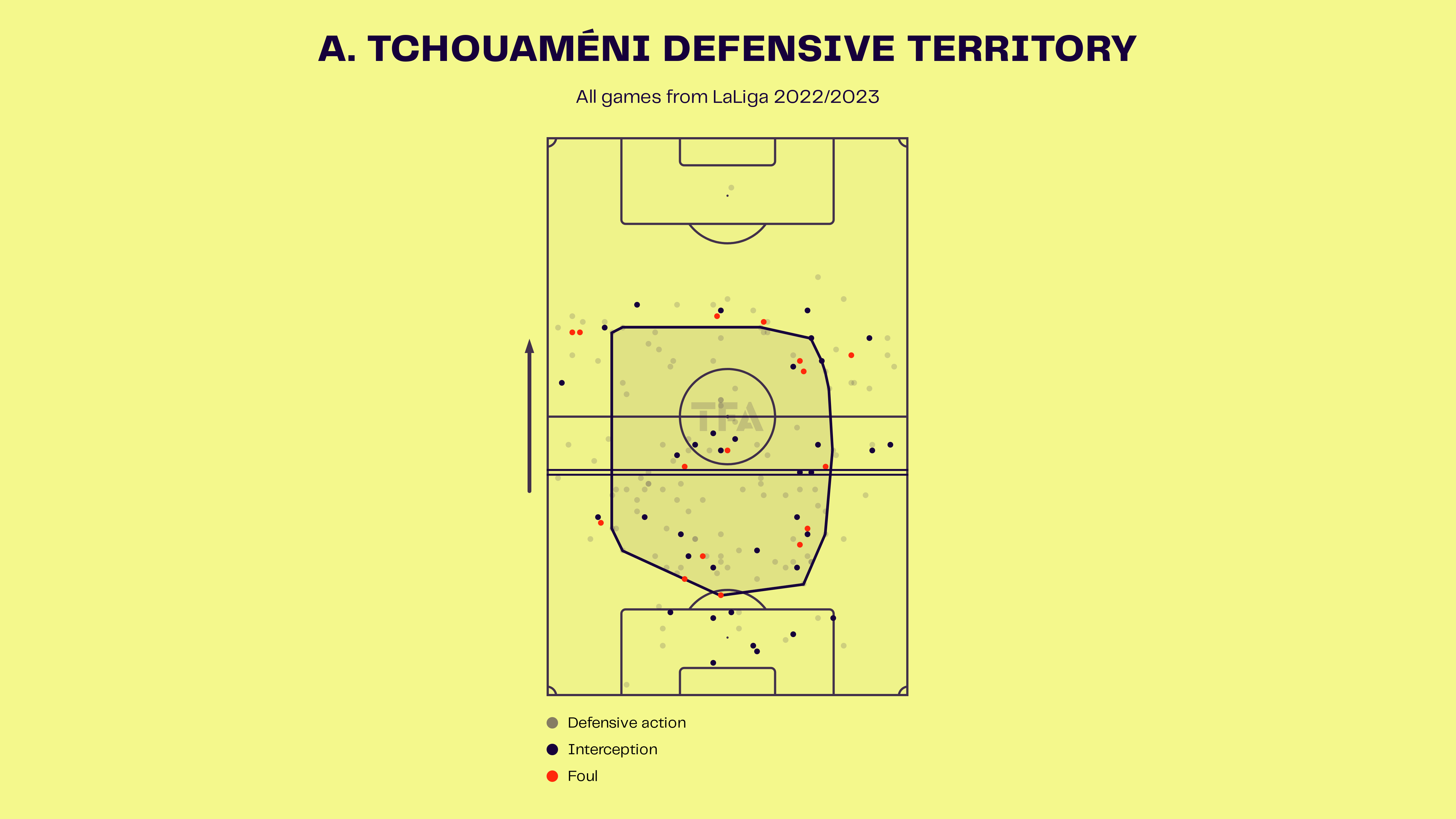 Real Madrid spent 80 million euros this summer to sign Aurelien Tchouameni, and the Frenchman has already cemented his place in Carlo Ancelotti’s team. The 22-year-old has bossed the midfield in both La Liga and the UEFA Champions League and has proven himself capable of playing in one of the best clubs in the world under one of the best managers in the world. His cool, calm, and physical presence at the heart of Real Madrid’s midfield has helped them immensely in both defence and attack equally. We take a look at some stats to understand how the young superstar has performed to earn Carlo Ancelotti’s trust. 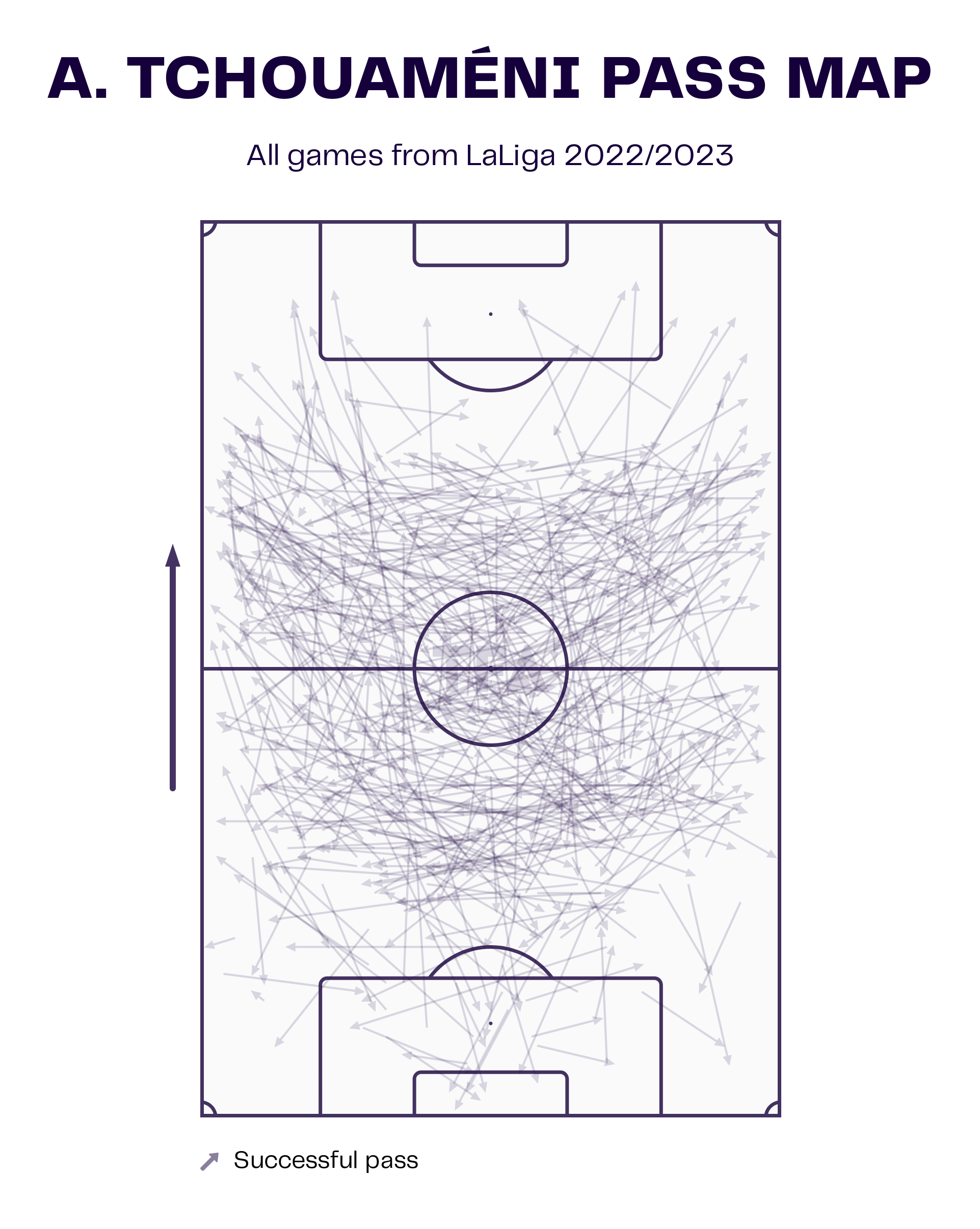 Aurelien Tchouameni sits at the heart of the Real Madrid midfield and controls the flow of the game. He makes around 62 passes per game and has an incredible passing accuracy of 93.01%. He usually stays deep when the team is defending, which he is capable of, and does go forward while attacking. His passing accuracy in the final third is one of the best, as he makes around eight passes into the final third per game with 94% accuracy. 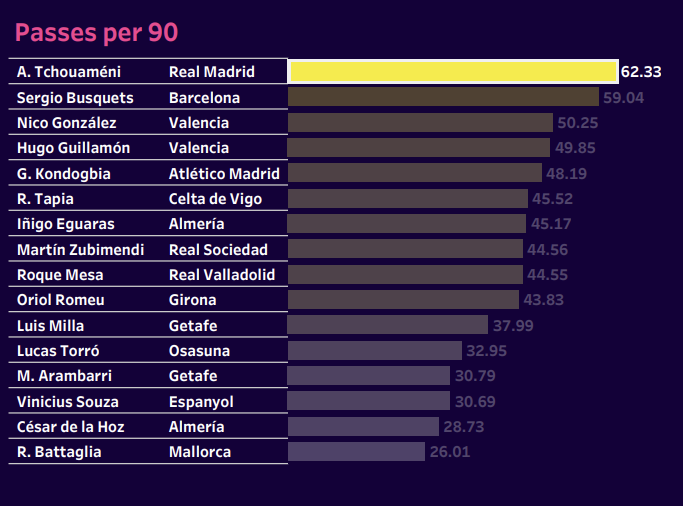 The above viz shows the passes per game of defensive midfielders in La Liga. The Frenchman has the highest number of passes per game in the league this season. He has registered two assists to his name as well. 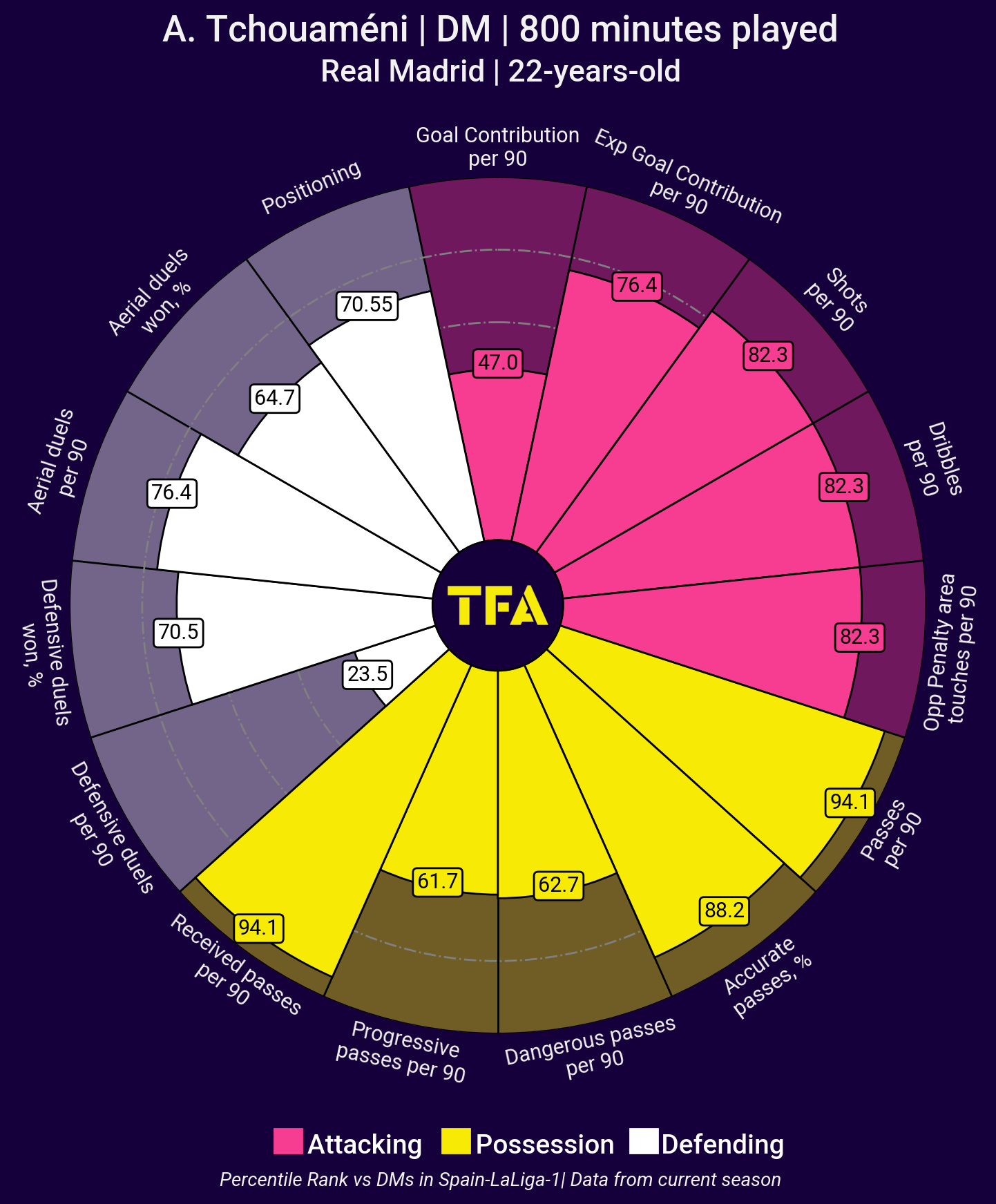 The above viz shows the percentile rank of Aurelien Tchouameni compared to other defensive midfielders in La Liga. He is in the top 94.1 percentile of passes per 90 and the top 88.2 percentile of accurate passes per game. 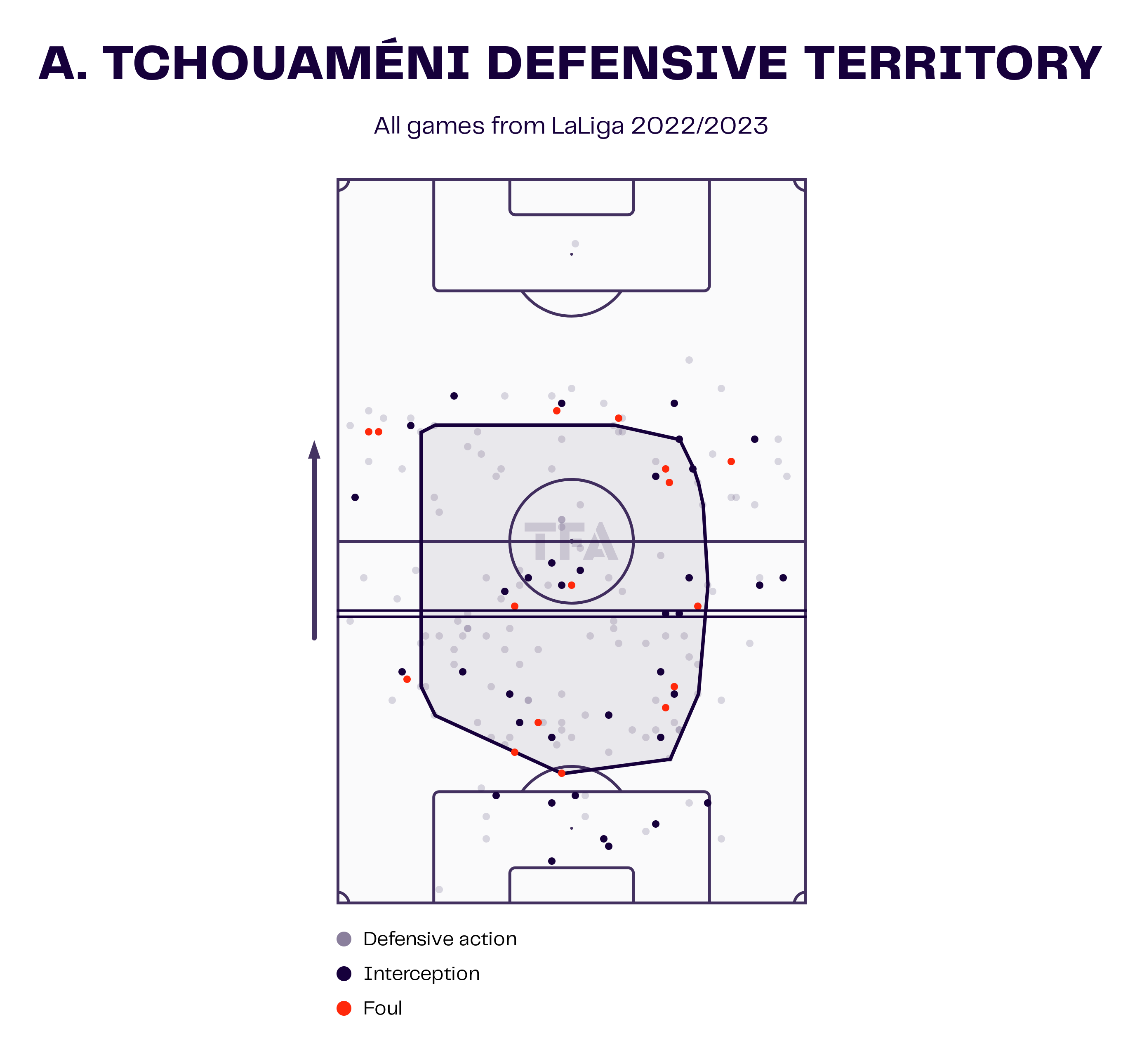 Aurelien Tchouameni is a solid defensive midfielder, and his numbers speak for themselves. His composure and temperament make him one of the best youngsters in his position in the world. Tchouameni has an incredibly strong physical presence as well. On average, he makes around six defensive duels per game with a 60% success rate and around four aerial duels per game with a 57% success rate. He is in the top 76.4 percentile of aerial duels in the league and the top 70.55 percentile of positioning as well. 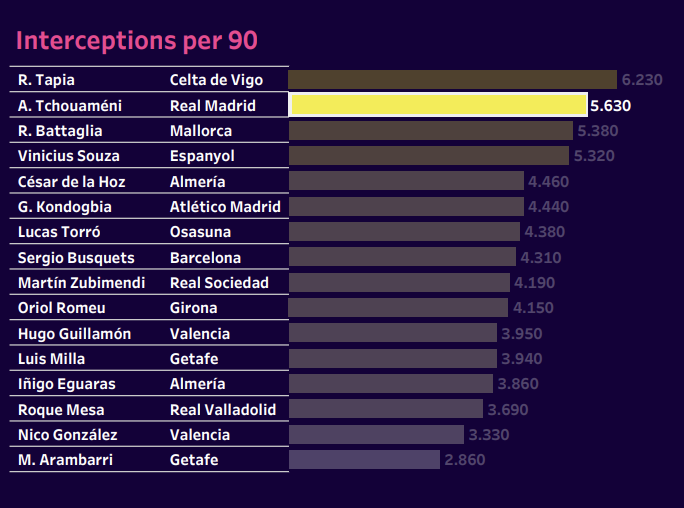 Tchouameni has the second most interceptions per game in La Liga. He makes around 5.63 interceptions per game. His strong presence in the midfield makes it very hard for opposition players to get past him. His ability to make timely interceptions, look up, and find the right pass almost invariably makes him an ideal foil for his position. 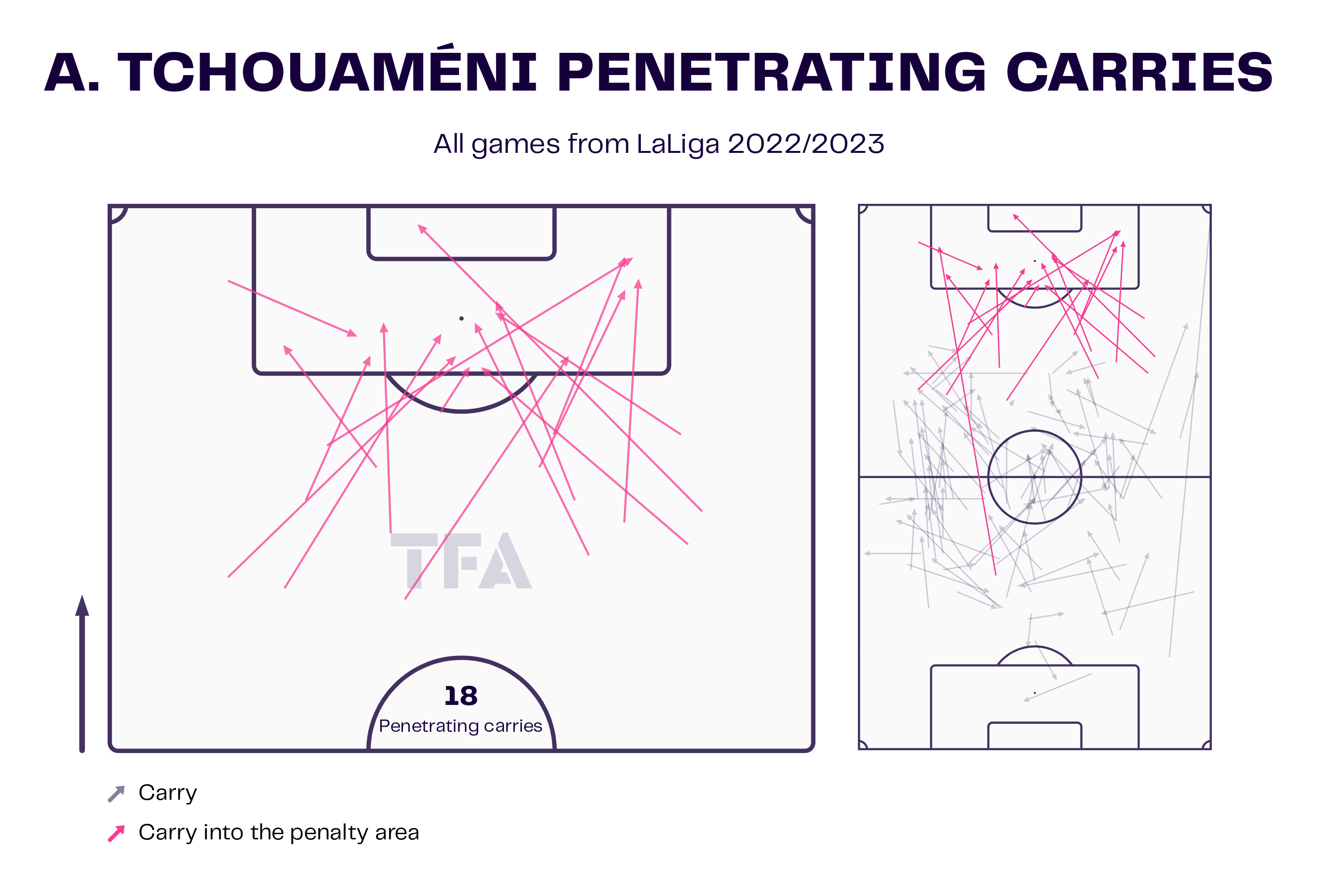 This season, the Frenchman has carried the ball 18 times for the Los Blancos. As the pizza chart suggests, he is in the top 82.3 percentile for dribbling and can ease past challenges. His technical ability, combined with his strong physique, helps him burst into the midfield with the ball and then find the right pass as well. 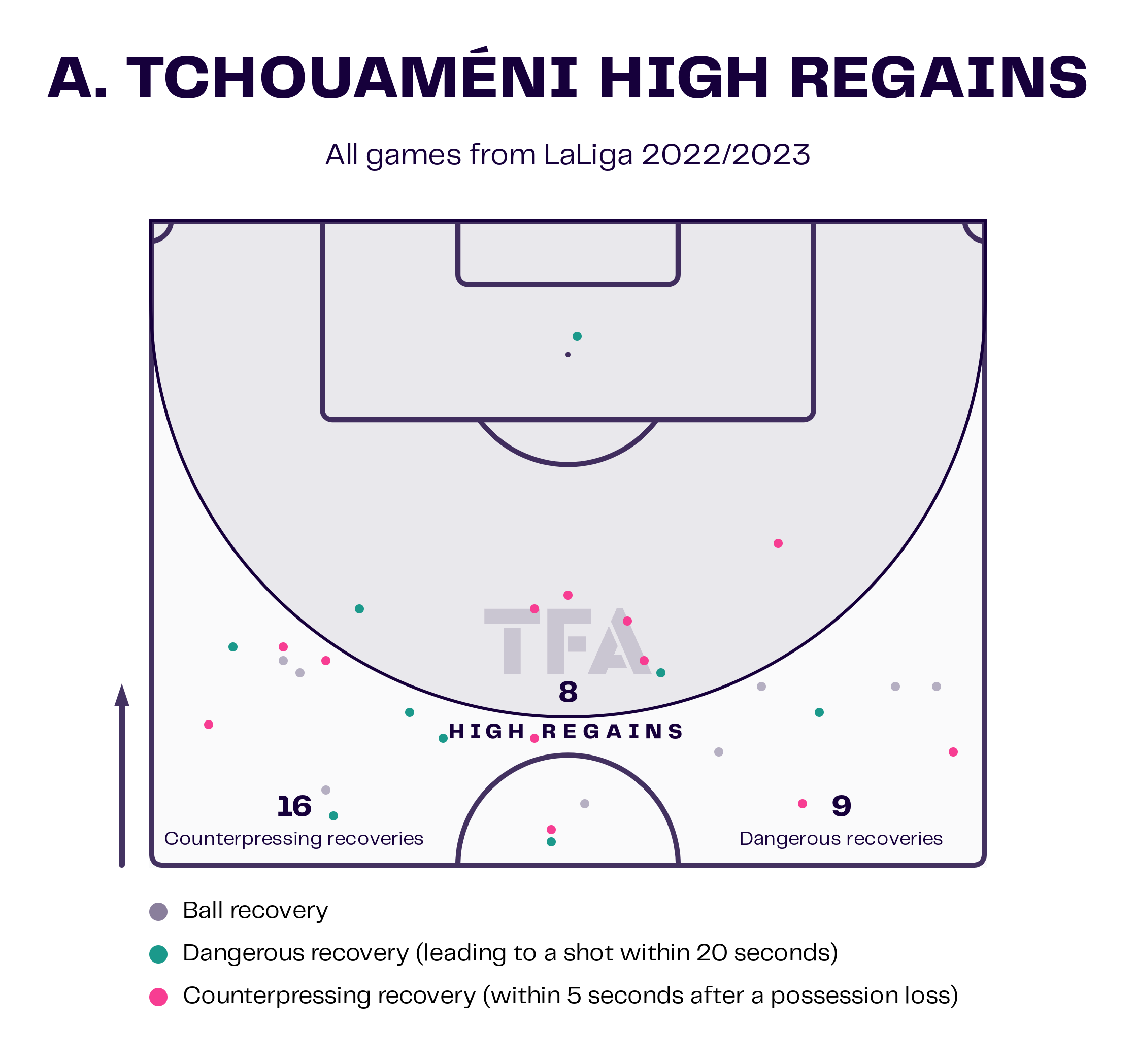 The dynamic youngster has provided Real Madrid with real energy in the midfield. His pressing and recoveries have also helped them to either counterattack or maintain possession. Tchouameni makes around 9.86 recoveries per game, with 32.1% of them in the opponent’s half. He also wins 57% of the loose ball duels he participates in.

Aurelien Tchouameni has proved to be an incredible signing for Real Madrid so far and has already found his place within the team. His youth, mixed with the experience of Toni Kroos and Luka Modric, has given Real Madrid’s midfield a dynamic look. His incredible performances have not gone unnoticed, and the youngster has been called up for his first World Cup as well. Carlo Ancelotti will be counting on him to deliver the same results for Los Blancos after the World Cup.

Why Valencia were too seasoned for Krasnodar in the Europa League

How Barcelona outsmarted Real Betis and extended their lead in La...