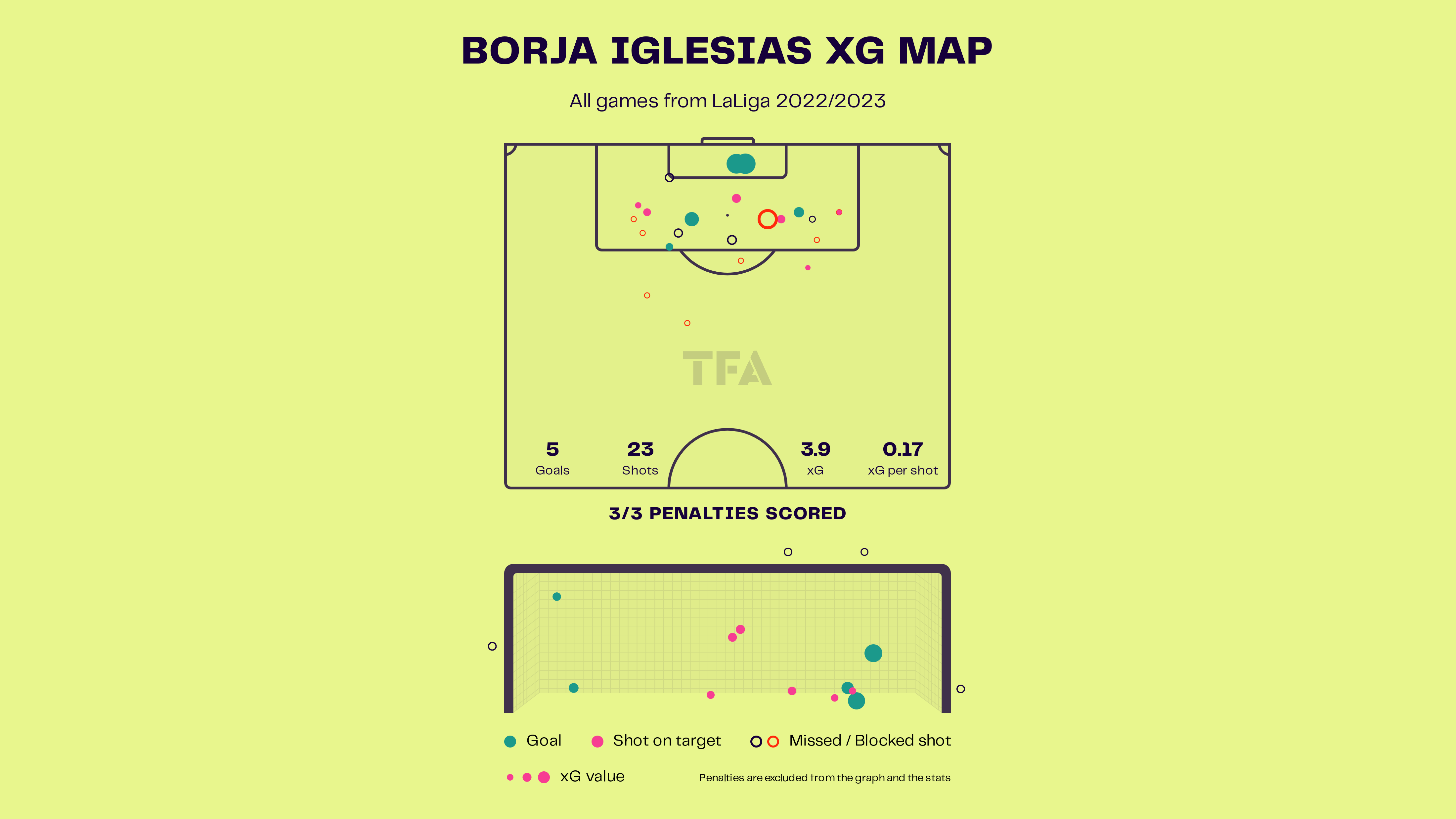 Borja Iglesias is having a tremendous 2022-23 season at Real Betis, as the 29-year-old is their top scorer with eight goals already this season. His form has helped his side climb to the sixth position in La Liga with 24 points from 14 matches. The Betis centre-forward is the second-highest goal scorer in La Liga this season with eight goals to his name, only behind Robert Lewandowski with 13 goals.

We take a look at some stats of Spanish International.

Borja Iglesias has played 13 matches for Betis this season, starting 12 of them and coming off the bench in the match against Cadiz. In these 13 matches, he has scored eight goals and made two assists as well. Iglesias has also scored a goal in Betis’ Europa League match against HJK Helsinki. 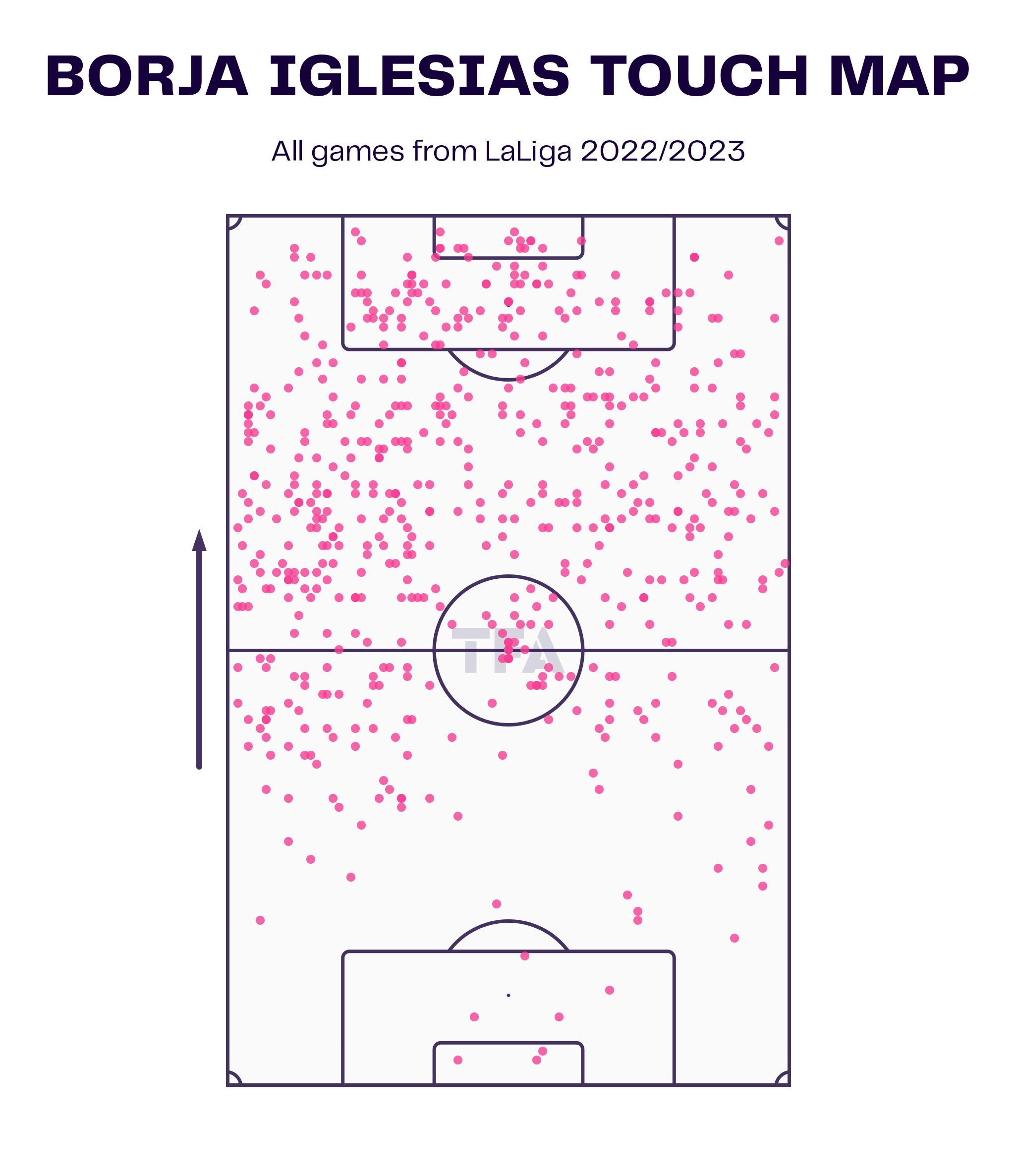 The above visualisation depicts Borja Iglesias’ touch map in La Liga this season. He likes to stretch the play and uses the width of the ground well. Playing as a centre forward, he occupies vacant spaces and runs into them with the ball. He has good ball control and takes an average of 3.72 touches in the penalty area. Although dribbling is not his strongest suit, he can go past challenges with his box of trickery and close control. 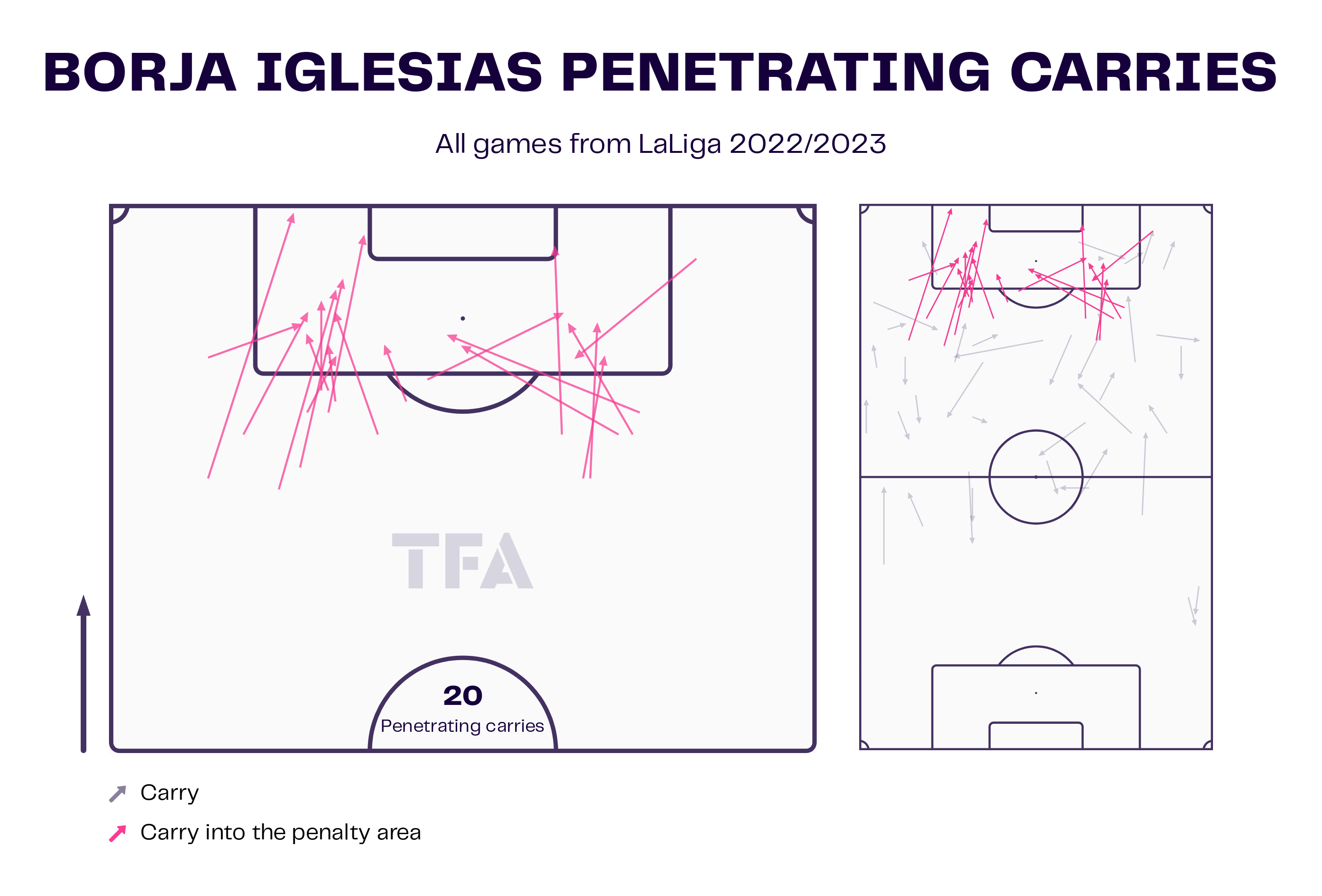 The above viz shows the penetrating carries by Borja Iglesias for Real Betis this season. We can observe from the viz that he is not someone who dribbles the ball from the halfway line. But when he gets the ball in the attacking third or near the box, he is capable enough to take it past players and either score or pose an attacking threat. Iglesias is more of a classic “number nine,” who holds up the play until another player arrives and then runs into the space. 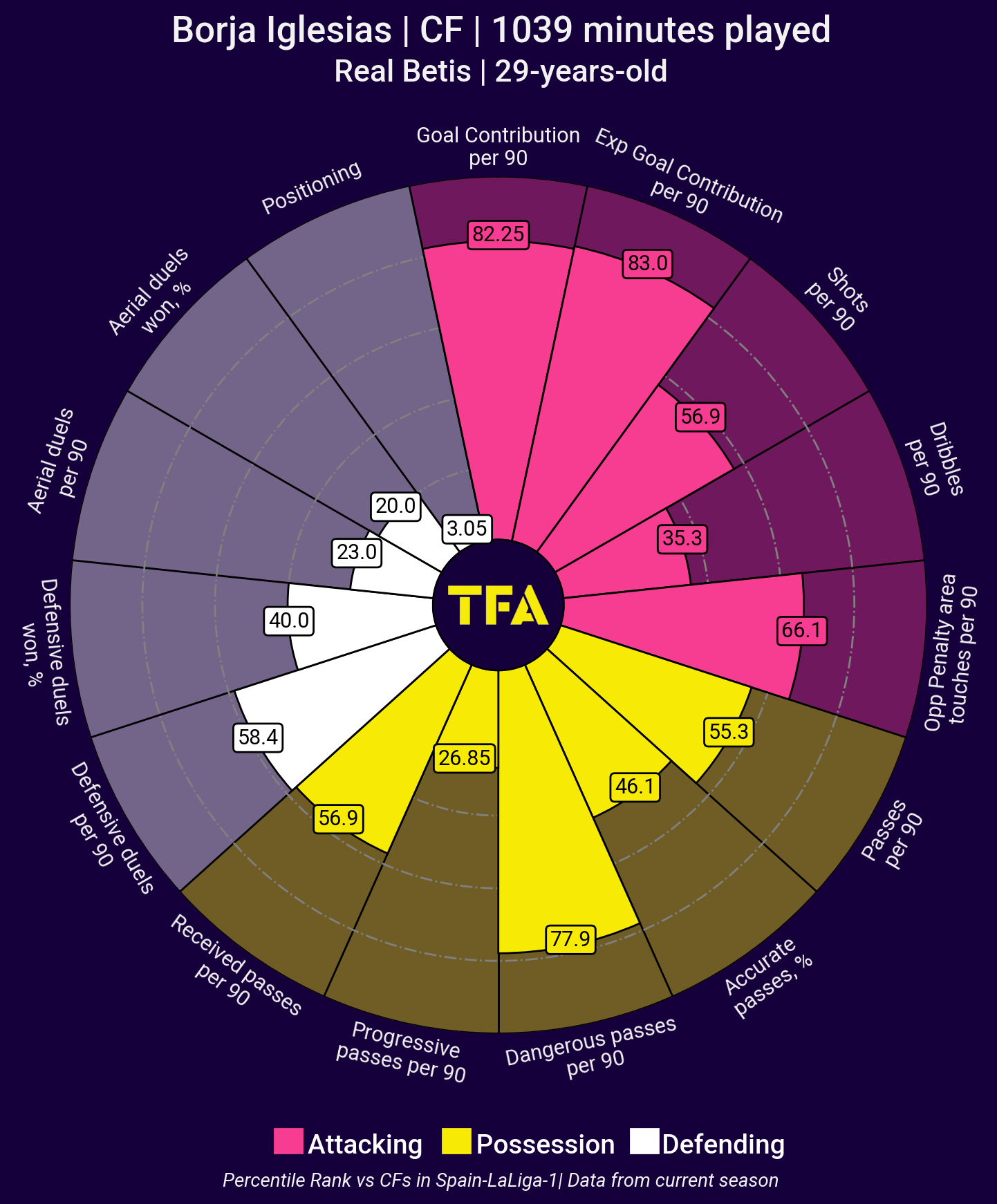 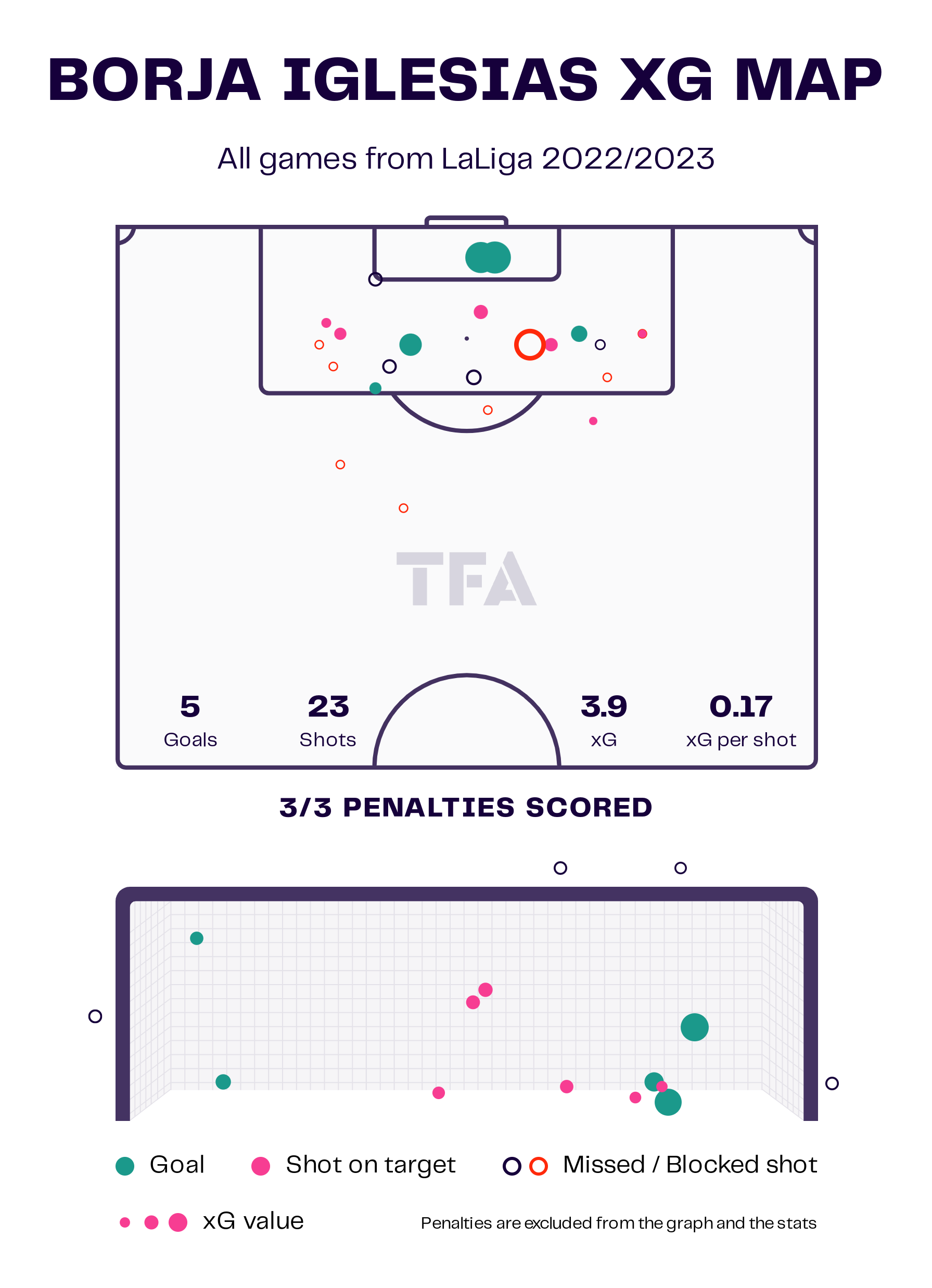 Borja Iglesias has been in incredible goal-scoring form this season, having already scored eight goals from 13 matches. The Spanish international attempted 23 shots, 18 of which were from inside the penalty box and 11 of which were on target. The 29-year-old has also scored from three spot kicks as well. Iglesias averages around 2.25 shots per 90 minutes and scores an average of 0.69 goals per game as well. He had scored ten goals last season, and by midway through this season, he has almost equalled last year’s record. 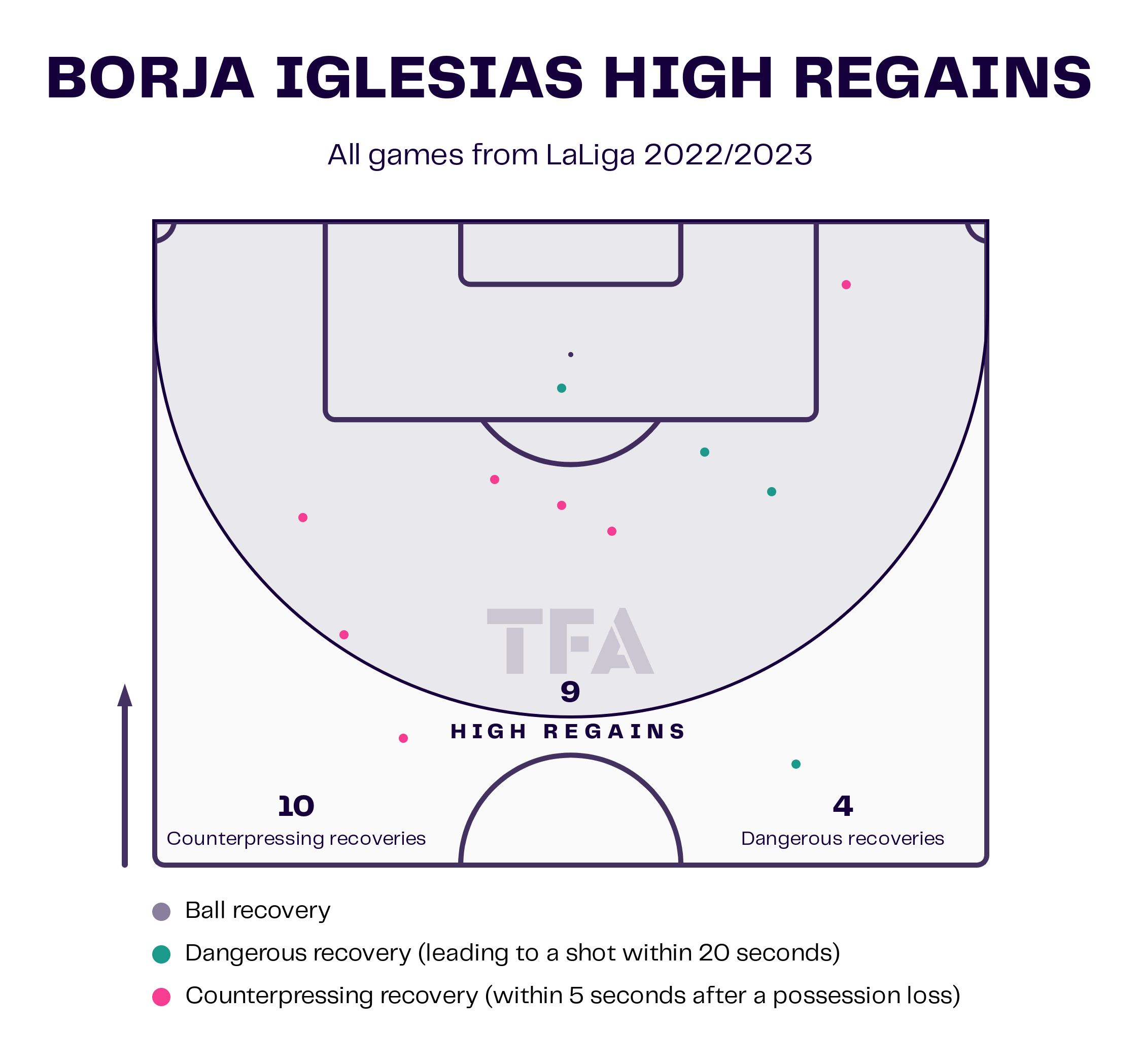 The Betis centre-forward has contributed some work defensively as well. His counter-pressing has helped the team recover possession in some dangerous areas. He makes around two recoveries per game, with 72.2% of those coming in the attacking half. These high regain include ten counter-pressing recoveries and four dangerous recoveries as well. His presence in front of the goal has been crucial and has helped his team a lot.

Borja Iglesias has found a rich vein of form and will want to keep it that way post-World Cup as well. Some experts believe it is unfortunate that he was not called up for the Spain squad even after producing some stellar displays. Either way, Manuel Pellegrini will be urging him to keep up the good work for the rest of the season as well.

‘Deeper problems’ – Valverde sacking isn’t the only solution for Barca

“The future of Barcelona scares me a lot” – Perrin

How Real Madrid struggled out wide in record-breaking Clasico defeat