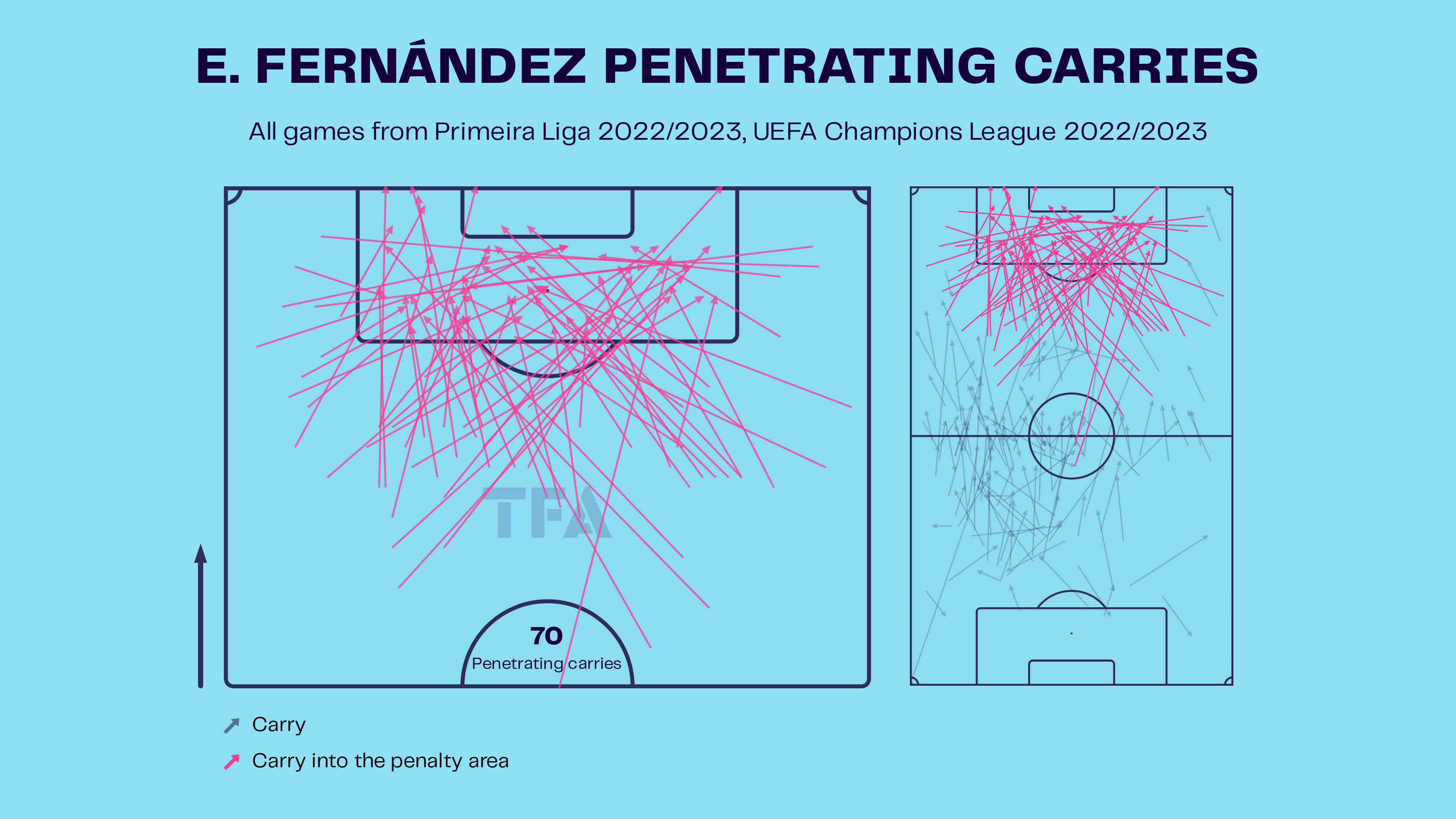 One of the revelations of the World Cup has been the 21-year-old Argentine sensation, Enzo Fernandez. He impressed everyone with his performance and played a crucial role in their win against Mexico. Fernandez has started since then and has been a boost of energy in the midfield for Argentina. Following his impressive performance, rumours have circulated that Spanish giants Real Madrid are interested in signing him. With an ageing midfield, Real Madrid is looking at options to replace their midfield maestros. Enzo Fernandez is said to be on their radar, but the Los Blancos will face stiff competition.

We look at some stats to understand why Real Madrid is interested in the Argentine midfielder.

Enzo Fernandez has played 13 matches for Benfica this season, starting all of them. He has scored a goal and has three assists to his name this season in Primeira Liga. He has two assists in the Champions League as well. Real Madrid is trying to bring the youngster into La Liga to play for them. 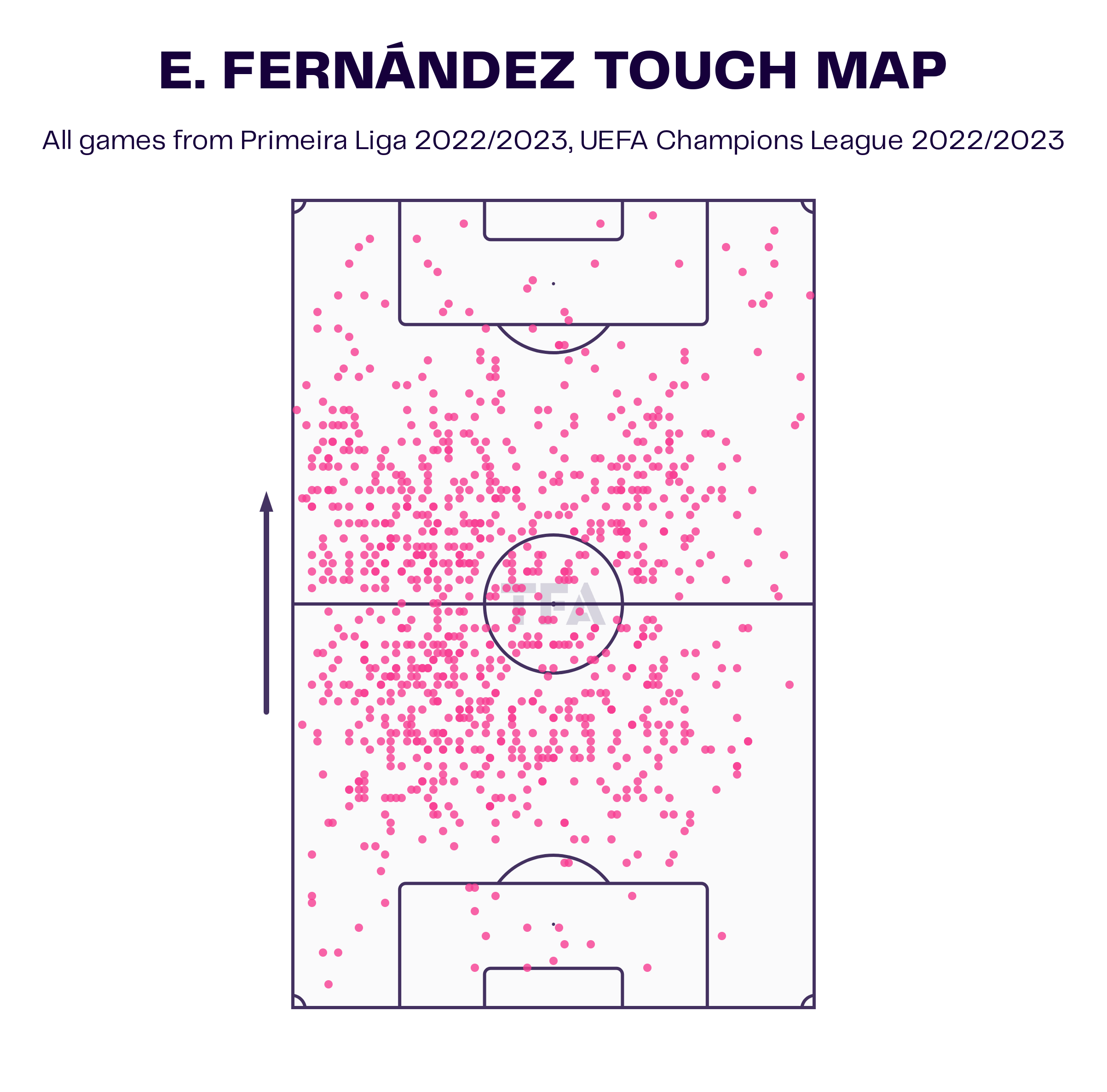 The above viz shows the touch map of Enzo Fernandez for Benfica this season. We can see from the viz that he covers a lot of ground. Fernandez usually plays either as a central midfielder or as a defensive midfielder. He stays centrally and presses high as well to recover possession in the middle of the park. He is a box-to-box player and can both attack and defend. The 21-year-old contributes well to the attack and has five assists across all competitions as well. 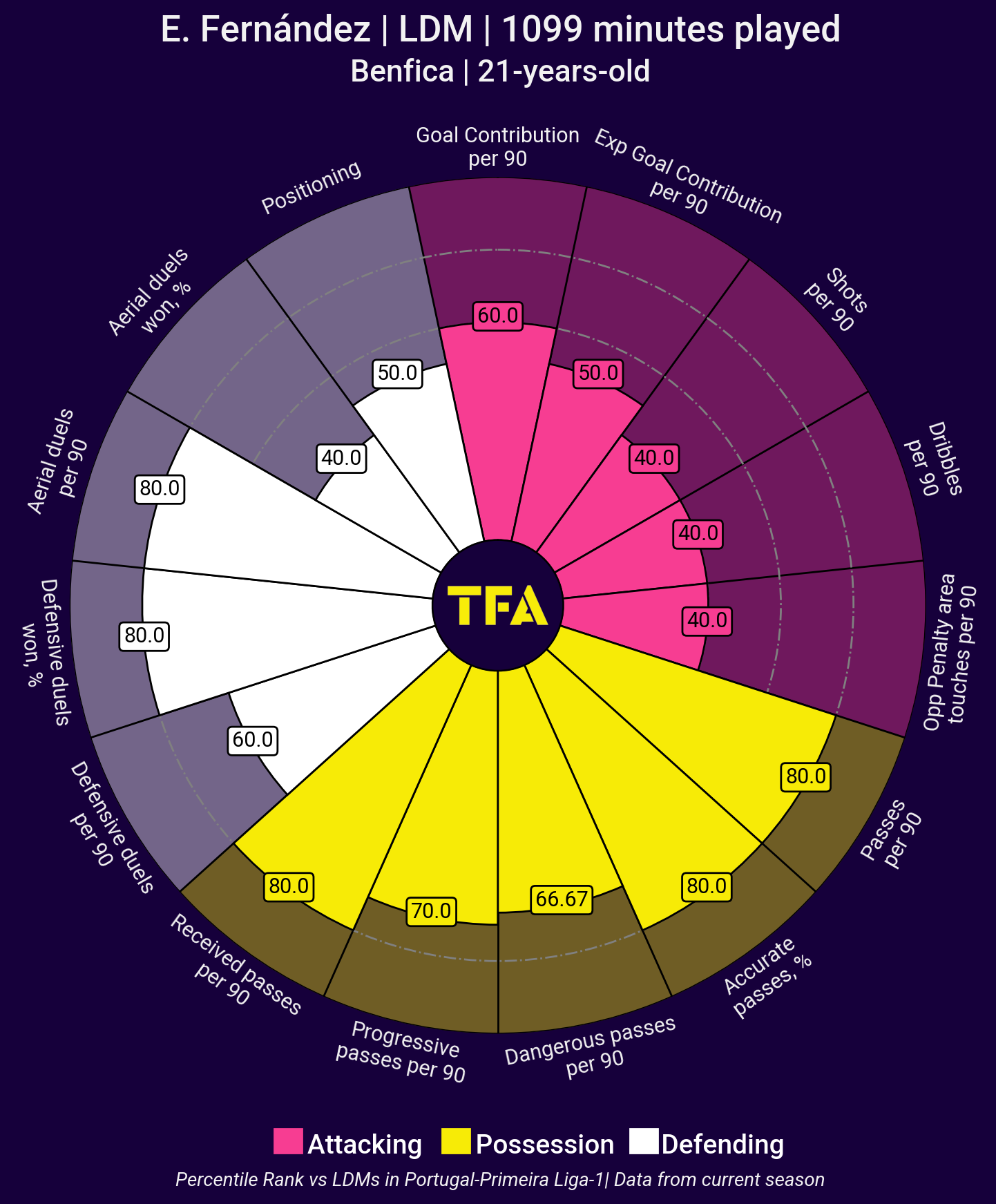 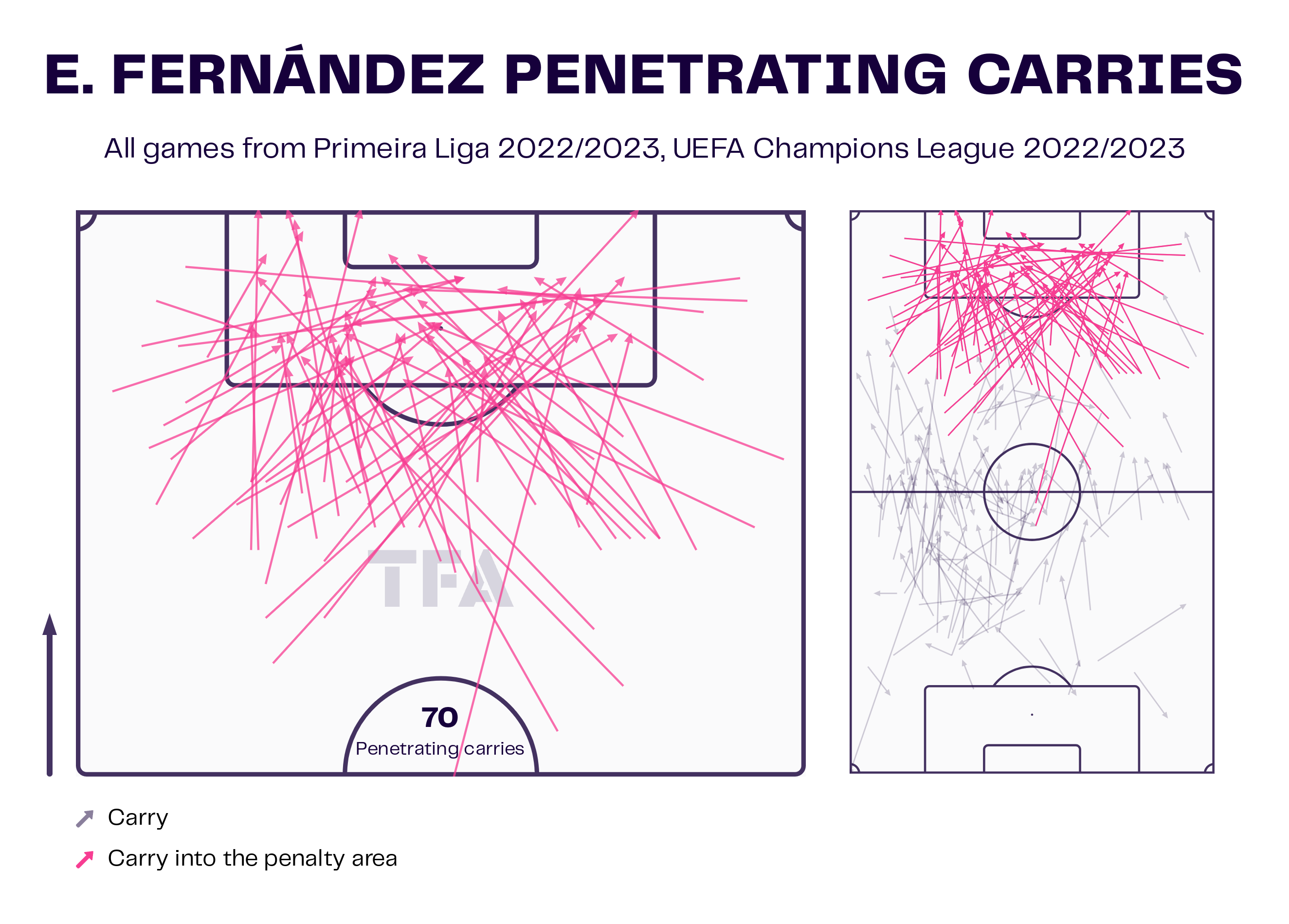 Another quality of Enzo Martinez that is worth mentioning is his ball-carrying skills. He can collect the ball from deep midfield and burst through defensive lines. This ability makes him an attacking threat and difficult to mark as well. He has made 70 penetrating carries for Benfica this season and has helped them immensely in their Champions League success. He has a 55% success rate when it comes to dribbling and makes an average of 1.8 dribbles per game as well. Enzo Fernandez also gets forward with his runs and makes an average of 1.39 progressive runs per game. 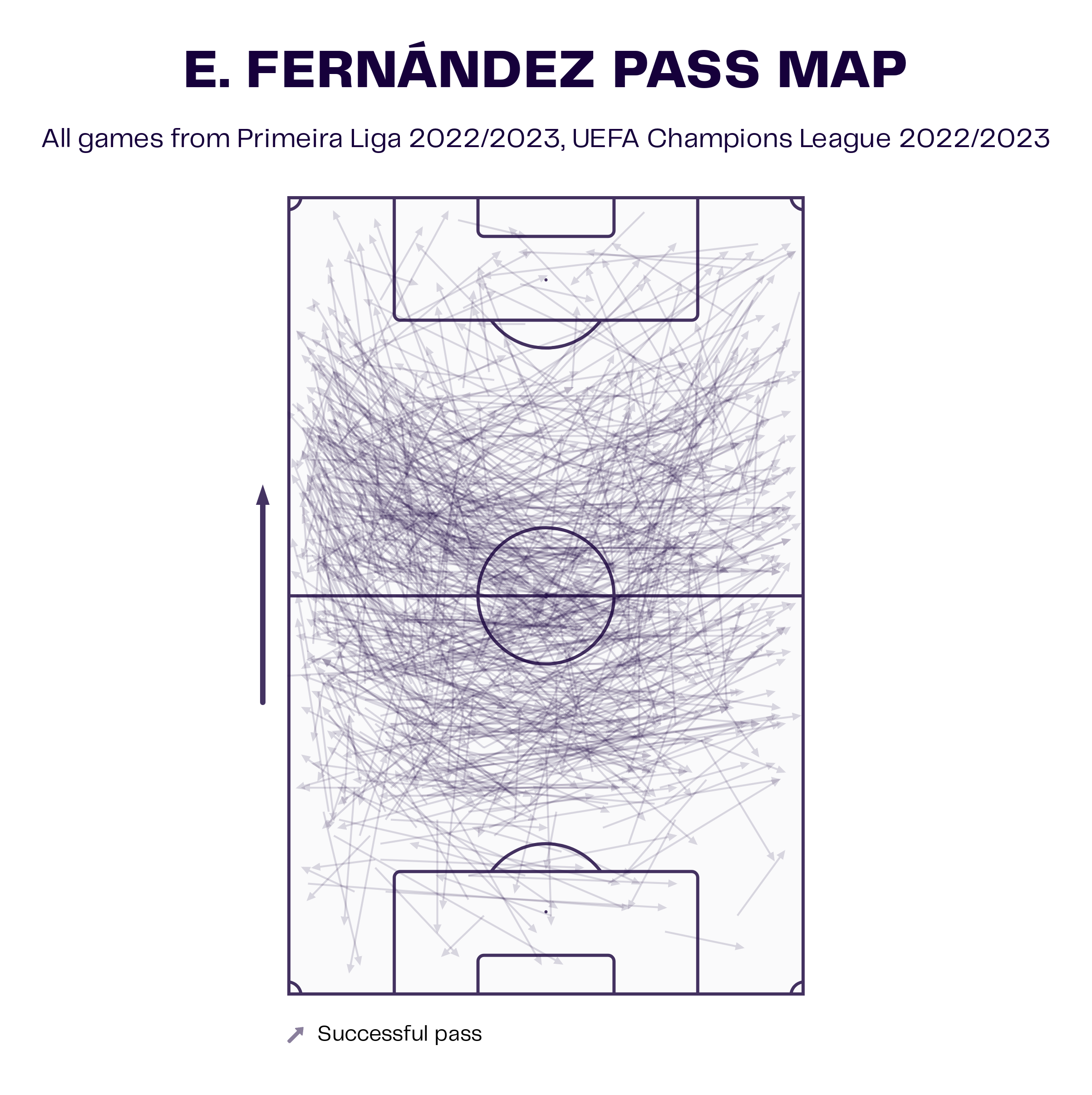 Passing is undoubtedly, one of Enzo Fernandez’s strong suits. As a central midfielder, he pulls the strings for Benfica and also plays some great passes. He has an 87.1% passing accuracy and averages 68 passes per game, demonstrating how the game flows through him. We can observe from the above viz that he sits in the midfield and passes the ball to almost all parts of the ground. He averages 13 passes to the final third and has a 79.8% accuracy rate. Fernandez also makes 2.81 passes into the penalty box, with a success rate of 51.9%. 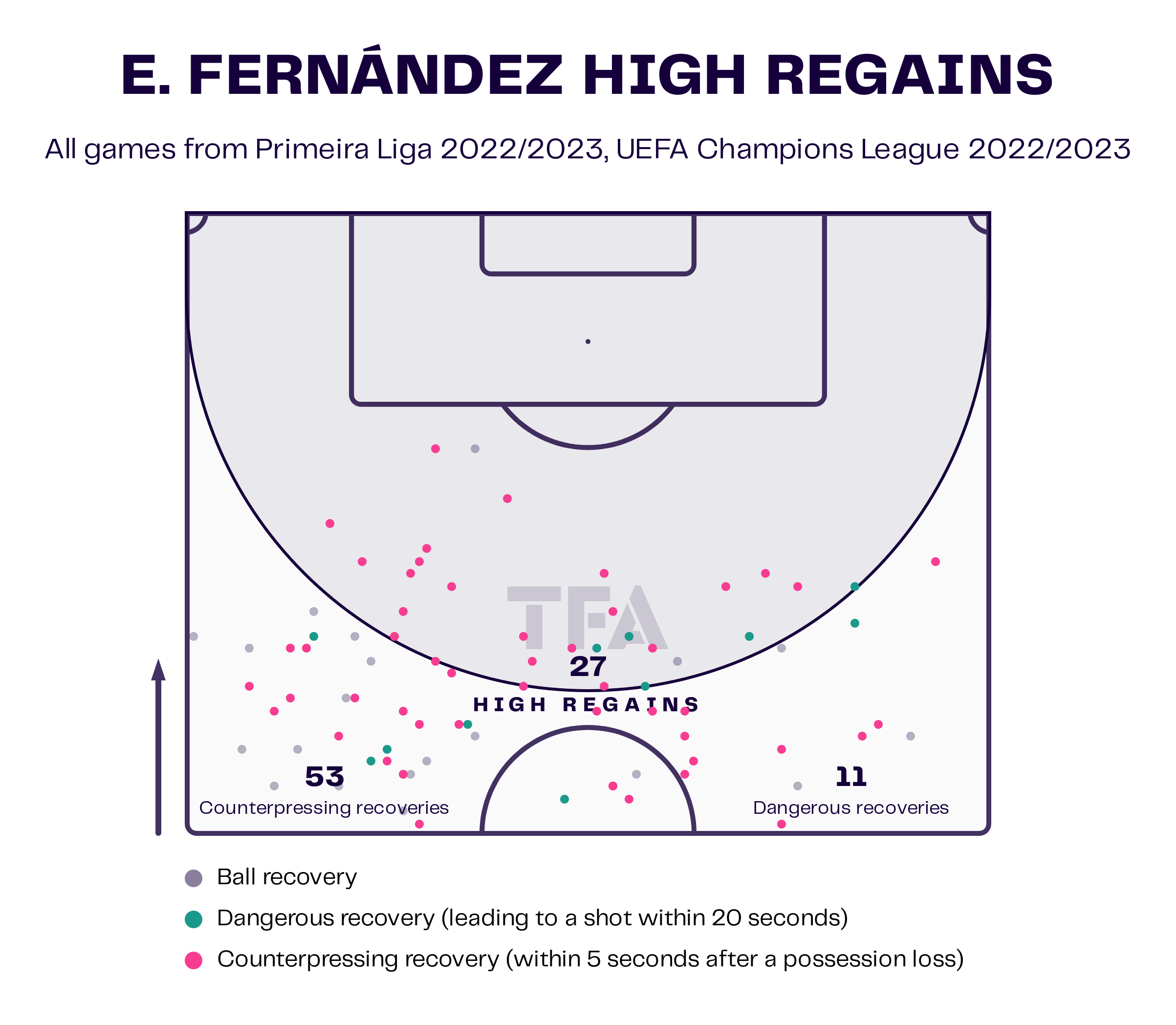 Another way in which Fernandes helps the team is by winning high-up balls in the attacking half. The above viz shows his high regains and as we can observe, he often recovers possession in good areas. These include 53 counter-pressing recoveries and 11 dangerous recoveries as well. These recoveries in the midfield will help Real Madrid, as they have quick players to counter-attack. 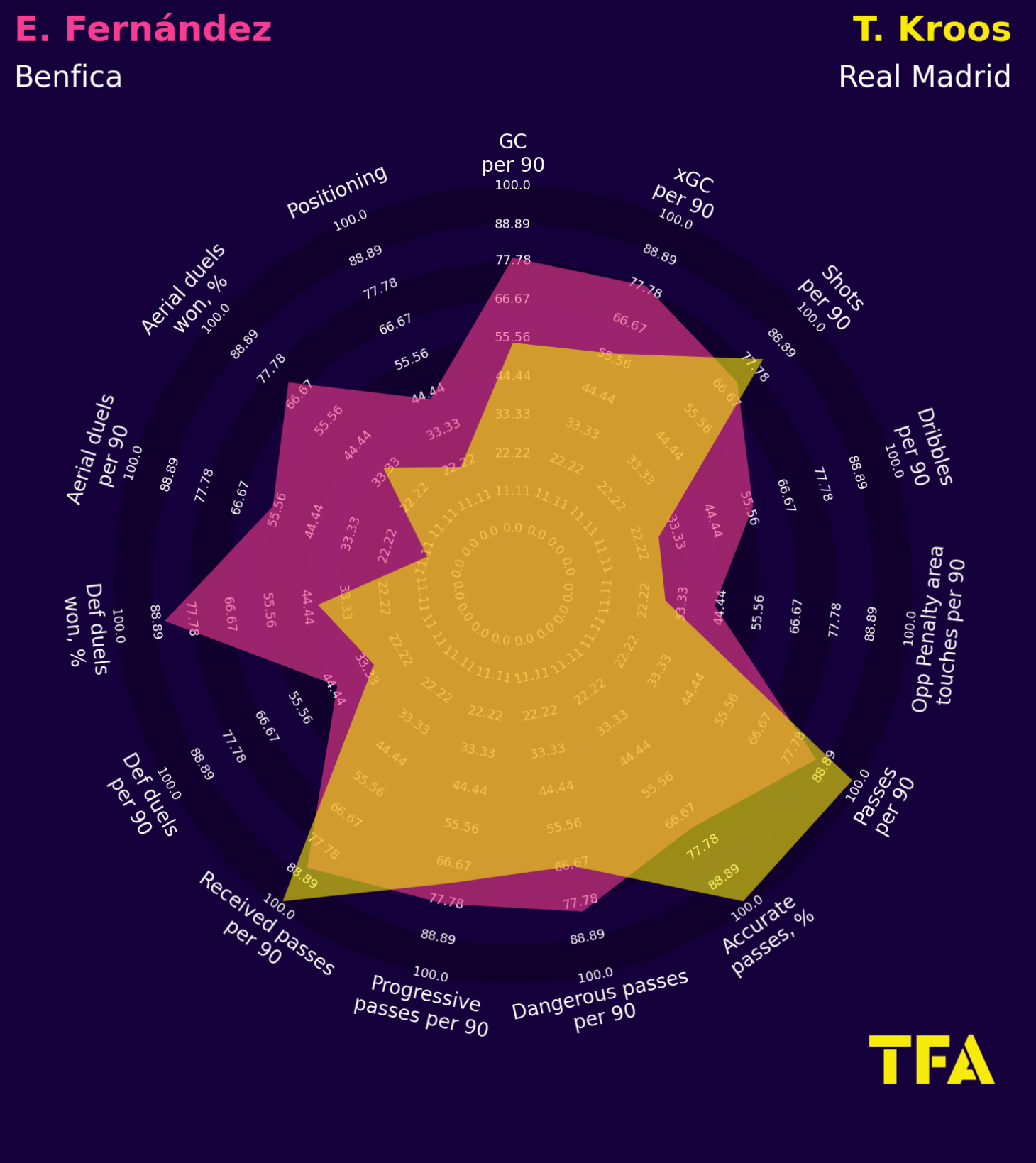 The above viz compares the radars of Enzo Fernandez and Toni Kroos. The Argentine player matches Toni Kroos’ stats in almost all areas and therefore looks like a good replacement. In addition, the energy and pace of the youngster can also help Real Madrid in the midfield.

Enzo Fernandez has been an impressive player for Benfica and is also turning it on in the World Cup. If Real Madrid manages to sign him, they will get themselves an incredibly talented and versatile midfielder who can bolster their already brilliant midfield.