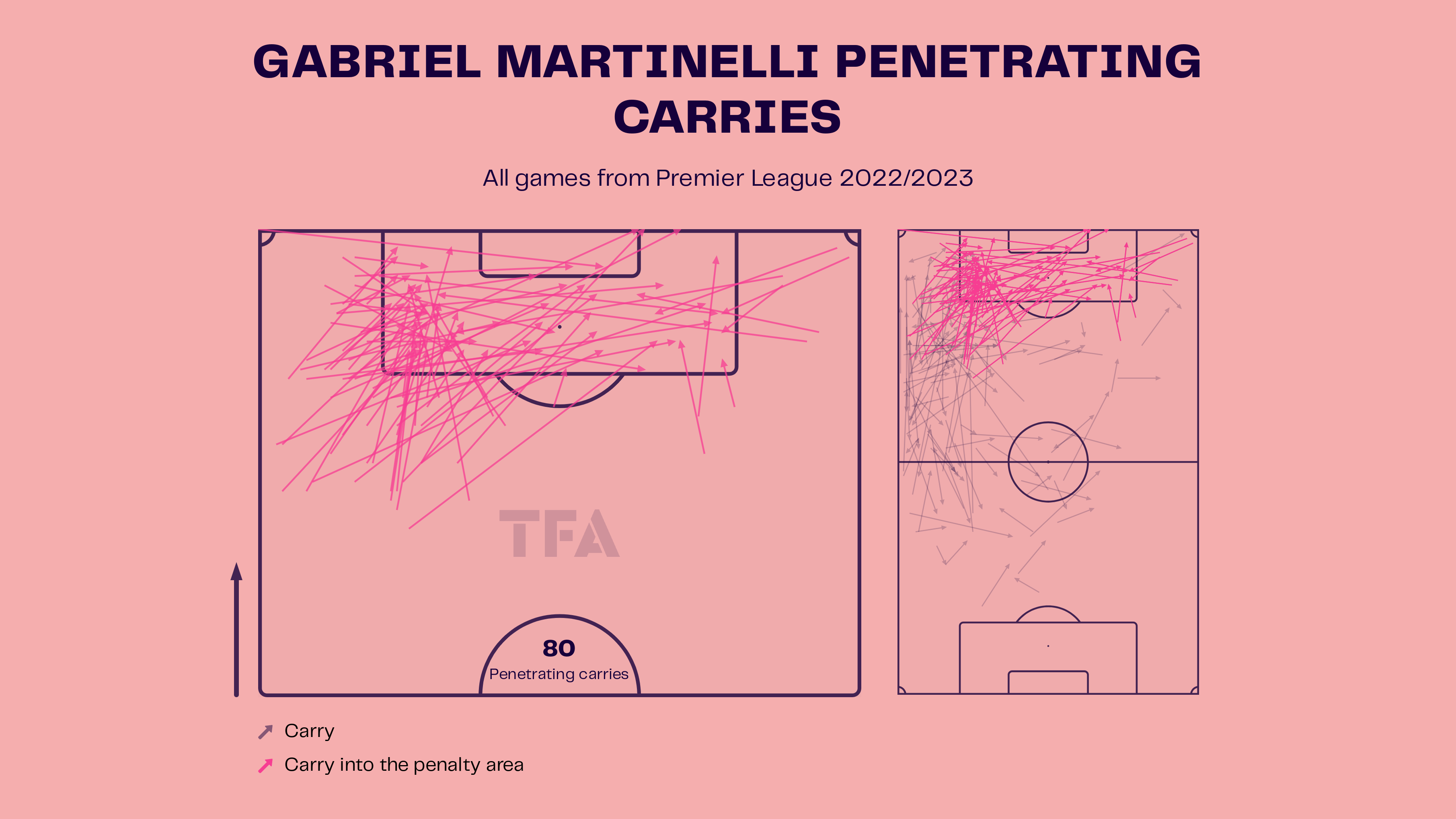 Even after being in desperate financial conditions, Barcelona is still keeping tabs on the top players in Europe. Reports have broken out that, the current La Liga table-toppers are closely monitoring Gabriel Martinelli. The 21-year-old is currently playing for Arsenal and is having a stellar season. The Brazilian has played an important role in taking the Gunners to the top of the table in the Premier League. He is currently under contract with the Gunners until the summer of 2024, but his performances have not gone unnoticed as big clubs have shown their interest in the Brazilian. We look at some stats to understand why Barcelona is keeping tabs on the 21-year-old Brazilian. 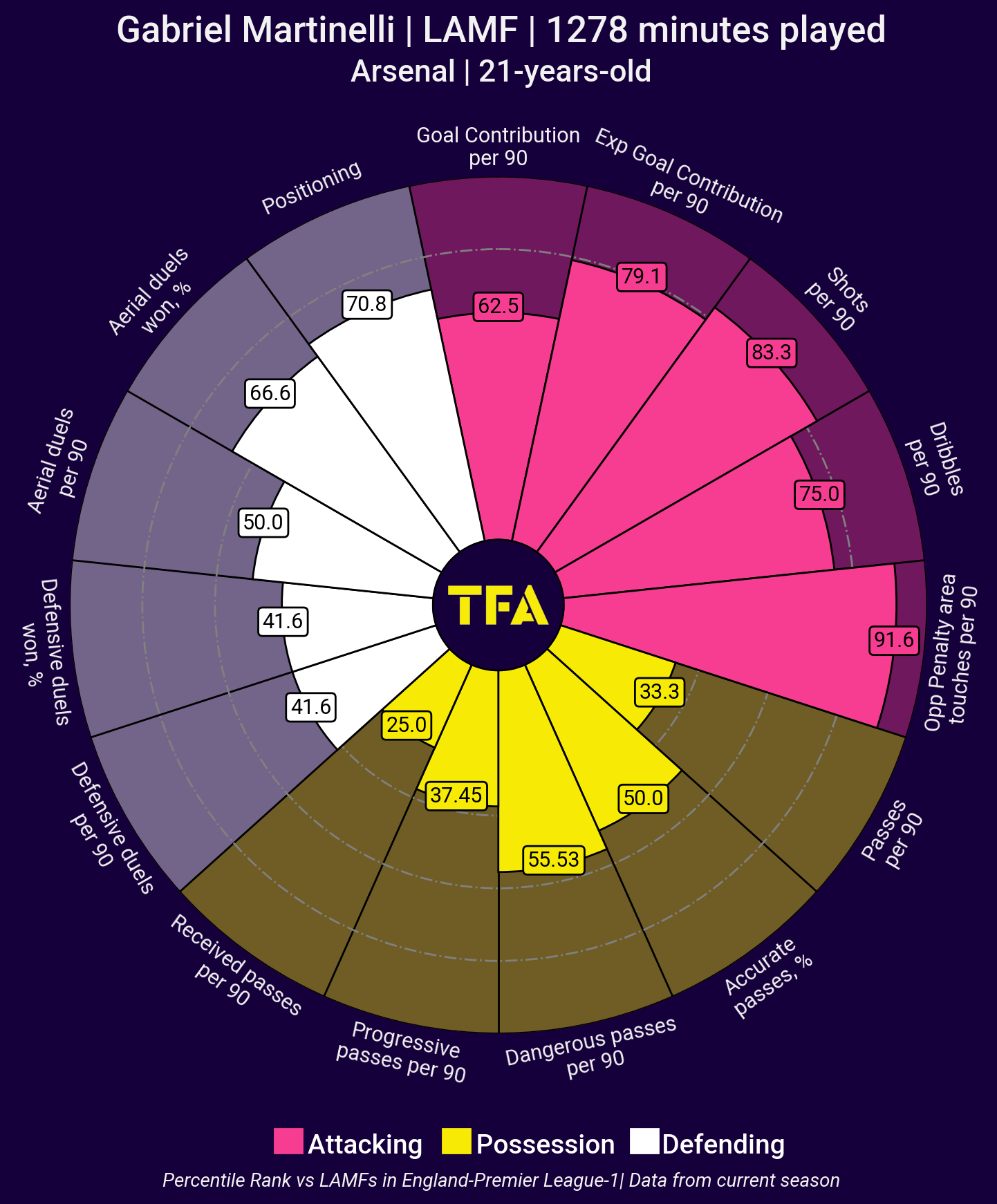 Gabriel Martinelli has played 14 matches for Arsenal this season in the Premier League. He has started in all 14 matches and scored five goals as well. The 21-year-old also has two assists to his name. He has been brilliant, and his form earned him a spot in the World Cup squad as well. He came off the bench in three matches for Brazil and managed to create an instant impact. The above visual shows the percentile rank of Gabriel Martinelli compared to other left-attacking midfielders in the Premier League. He is ranked in the top 91.6 percentile for touches in the opposition’s penalty area and the top 83.3 percentile for shots per game. This shows how Martinelli is a constant threat in front of the goal. He also contributes to the defence by tracking back and has decent defensive stats as well. 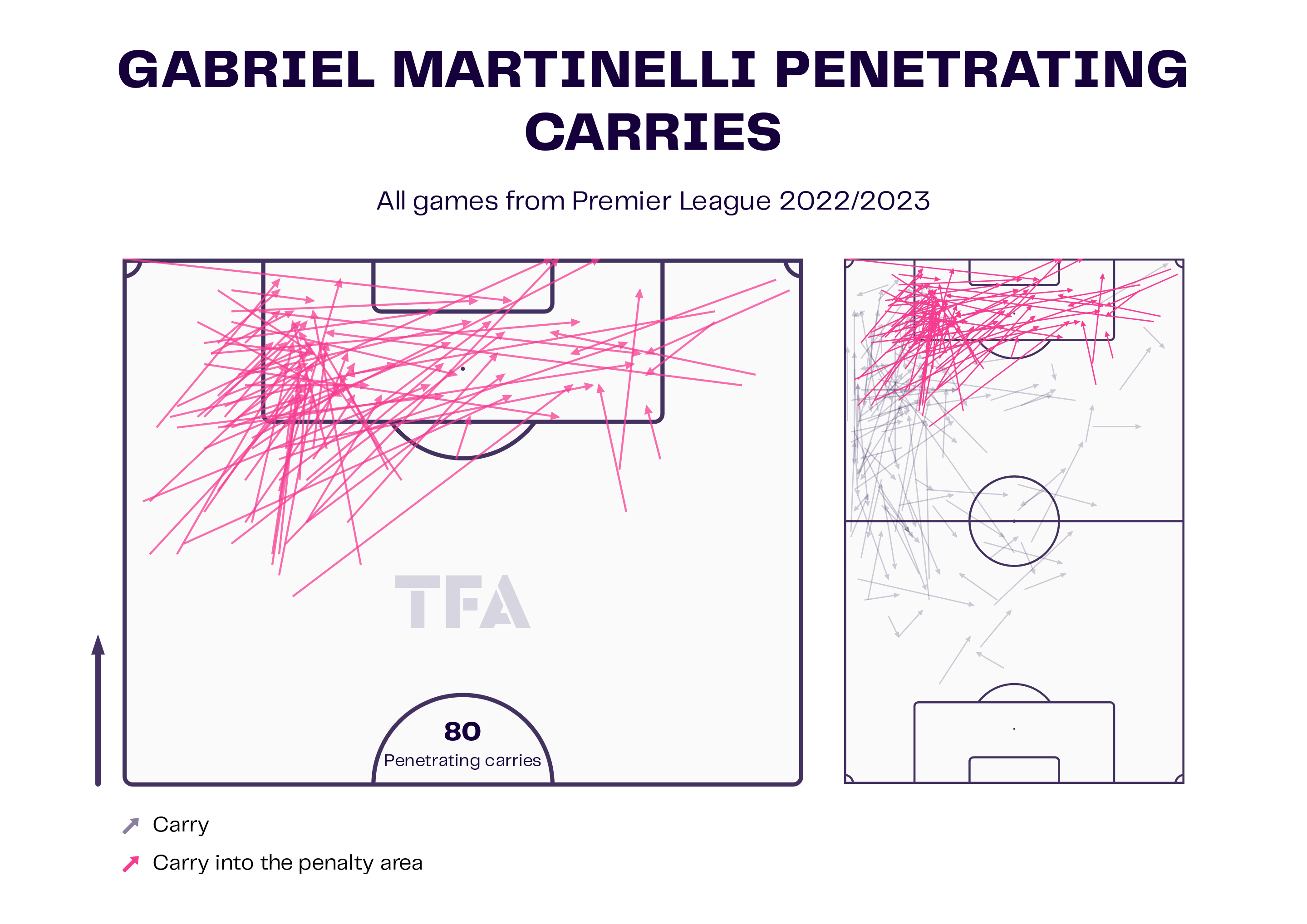 Martinelli’s ability to run with the ball is one of his best qualities. He has made 80 penetrating carries this season and has been a nightmare for the opposition defence. His runs through the left wing are always a threat, and he manages to either cut inside or find the right pass. He averages 6.41 dribbles per game with a success rate of 56%. Martinelli is a quick player and therefore can suddenly change gears as well. He is a constant threat and has helped Arsenal and Mikel Arteta in their effort to revive the great club’s status. Martinelli also makes an average of 3.03 progressive runs per game. Since he is fast, he can run into space and provide an outlet for a sudden counter-attack. 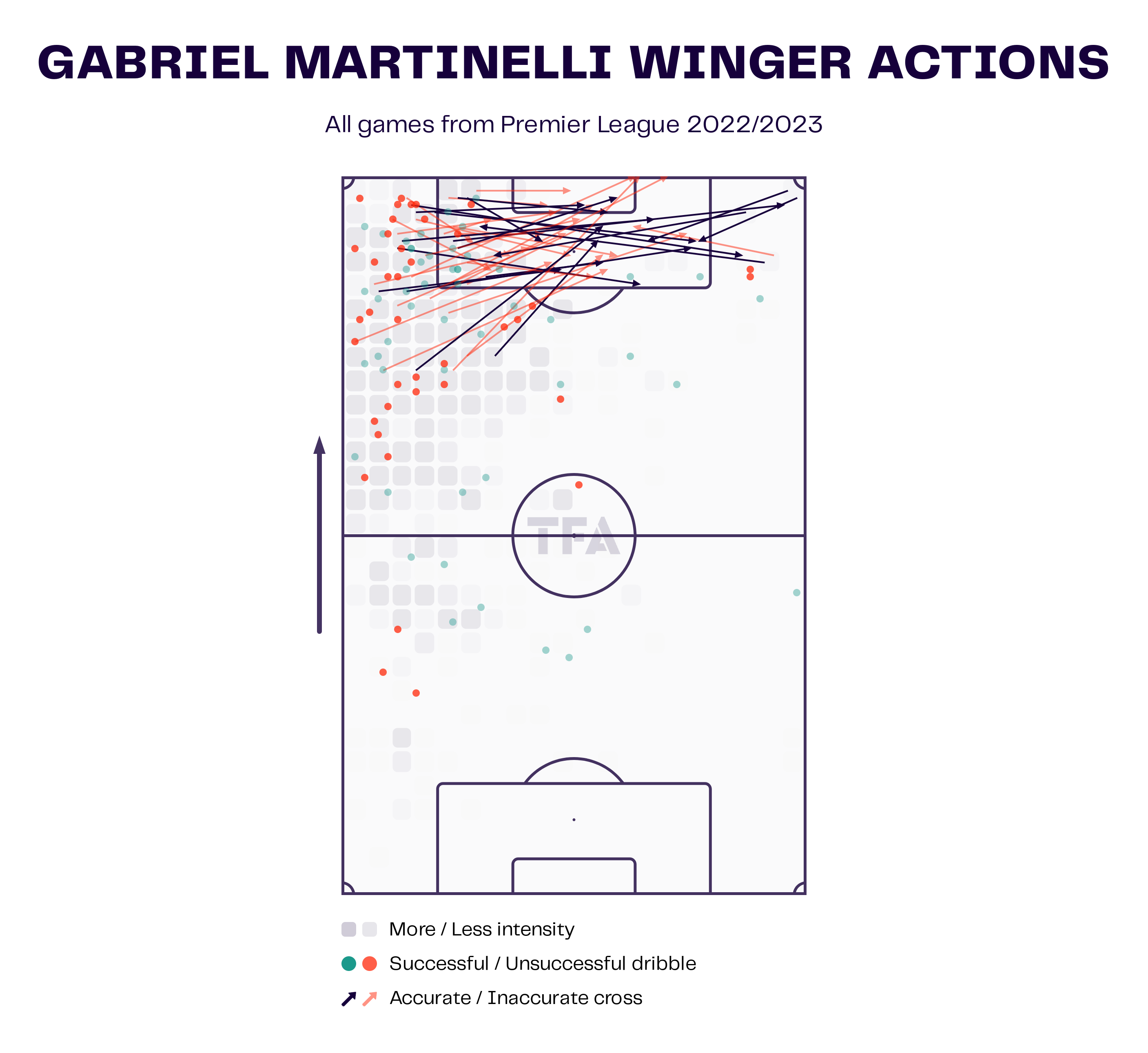 Even though Martinelli plays as a left-attacking midfielder in Arteta’s system, in effect, he plays as a winger. He stays wide on the pitch to receive the ball and tries to take on the defenders. His ability to go past players and challenges has helped Arsenal incredibly, as he has, on many occasions, provided a quick attacking option from the left flank. He takes part in 13.87 offensive duels on average and wins 40.6% of them. The 21-year-old also whips in an average of 3.66 crosses as well. These qualities make him an ideal prospect for Barcelona, as his runs and crosses can pose a real threat. With Jordi Alba nearing the end of his career and a lack of a consistent left-winger, adding Martinelli to the mix could spice up the Barcelona front line. 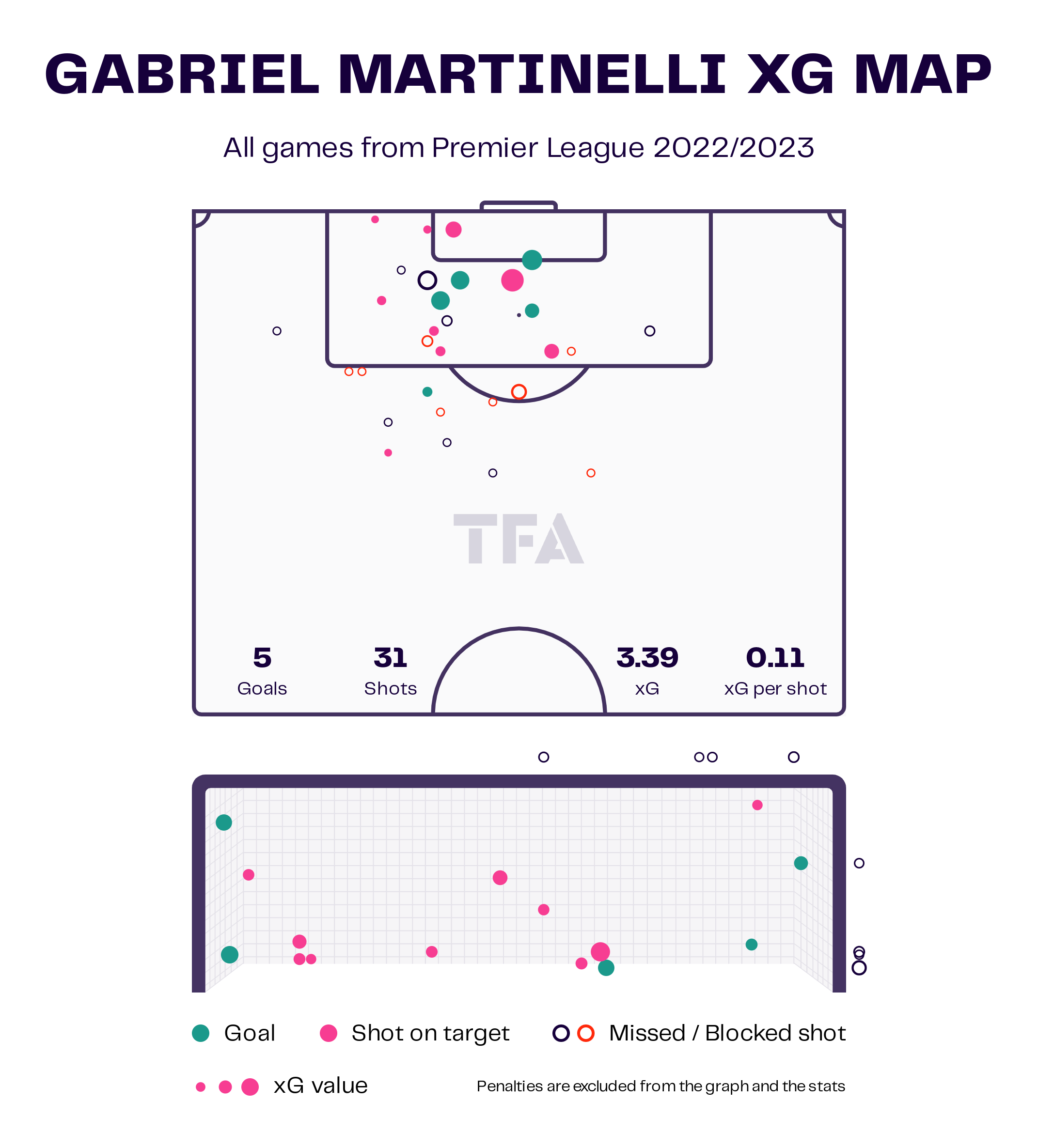 Gabriel Martinelli has scored five times this season for the Gunners and has two assists to his name as well. He has tried 31 shots, with 19 of them inside the penalty box and 15 of them on target. The Brazilians average 2.18 shots per game, with 48.6% of them on target. If Barcelona manages to sign him, his goal-scoring instinct could prove invaluable to them, as they rely too much on Robert Lewandowski to find the back of the net. 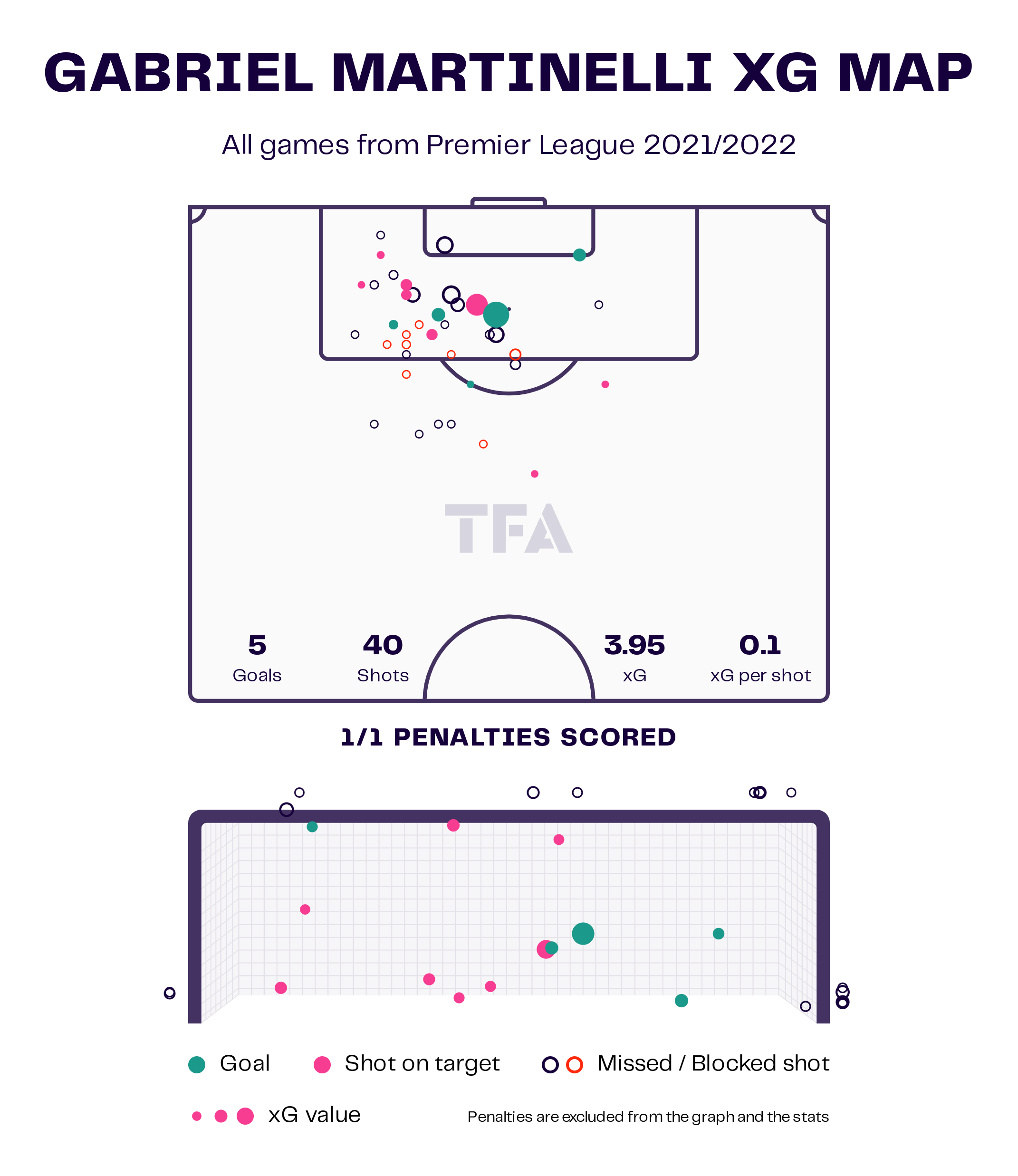 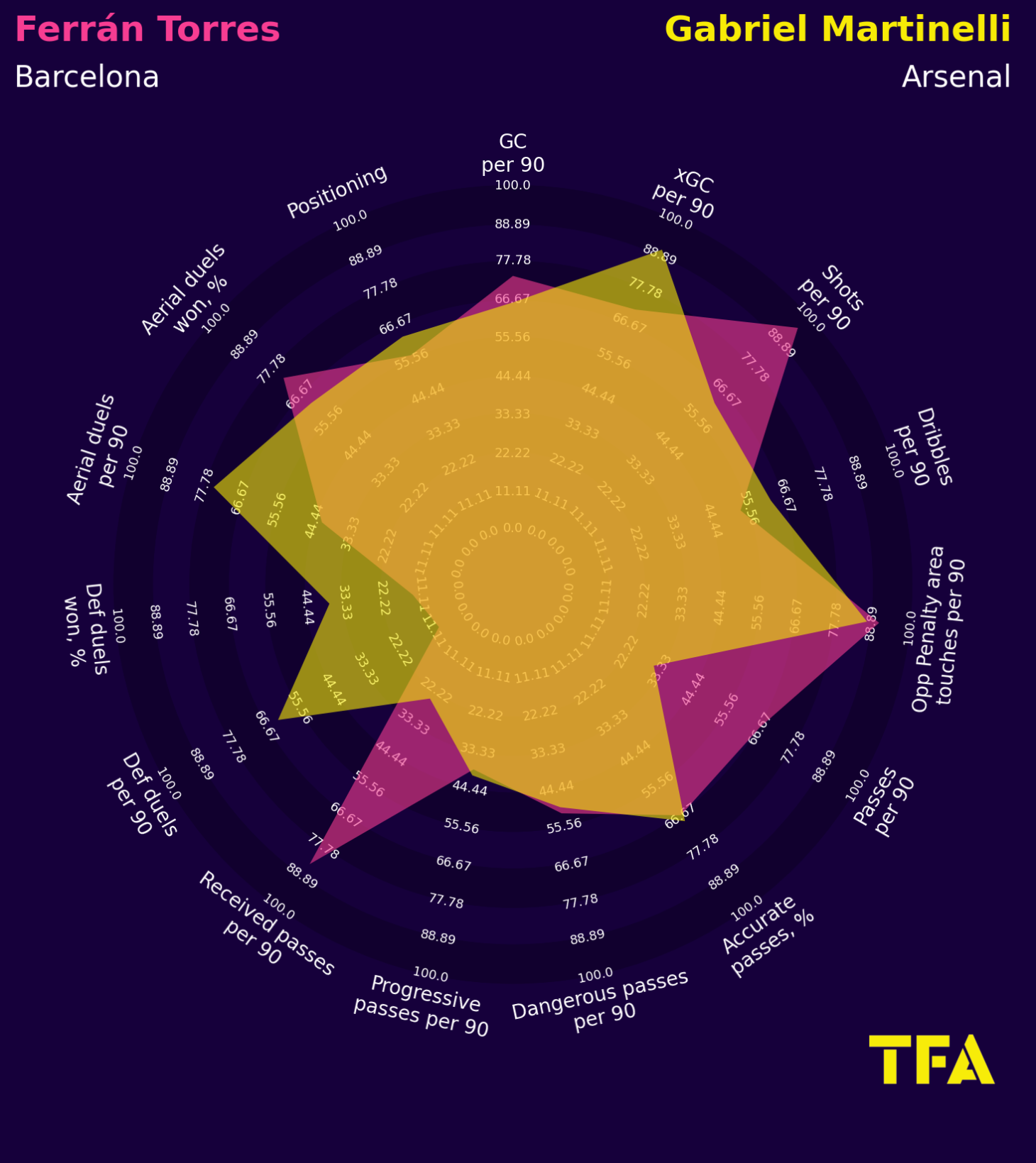 Barcelona already has a similar player to Martinelli in the form of Ferran Torres. But Torres prefers playing on the right wing and is at his best when he plays in that position. The above visual compares the radars of Gabriel Martinelli and Ferran Torres. They both have similar traits and are two youngsters with incredible talent. The former is better at dribbling and duels, while the latter completes more shots and passes. But even after having fewer shots per game than Torres, Martinelli has more goals.

Gabriel Martinelli has been a revelation for Arsenal ever since they signed the youngster. He is only 21 and has a long future ahead of him. The Brazilian is currently bonded to Arsenal until 2024. But if he decides to make a move to the Catalan capital, Barcelona will get a brilliantly established winger who has proven himself at the highest level.