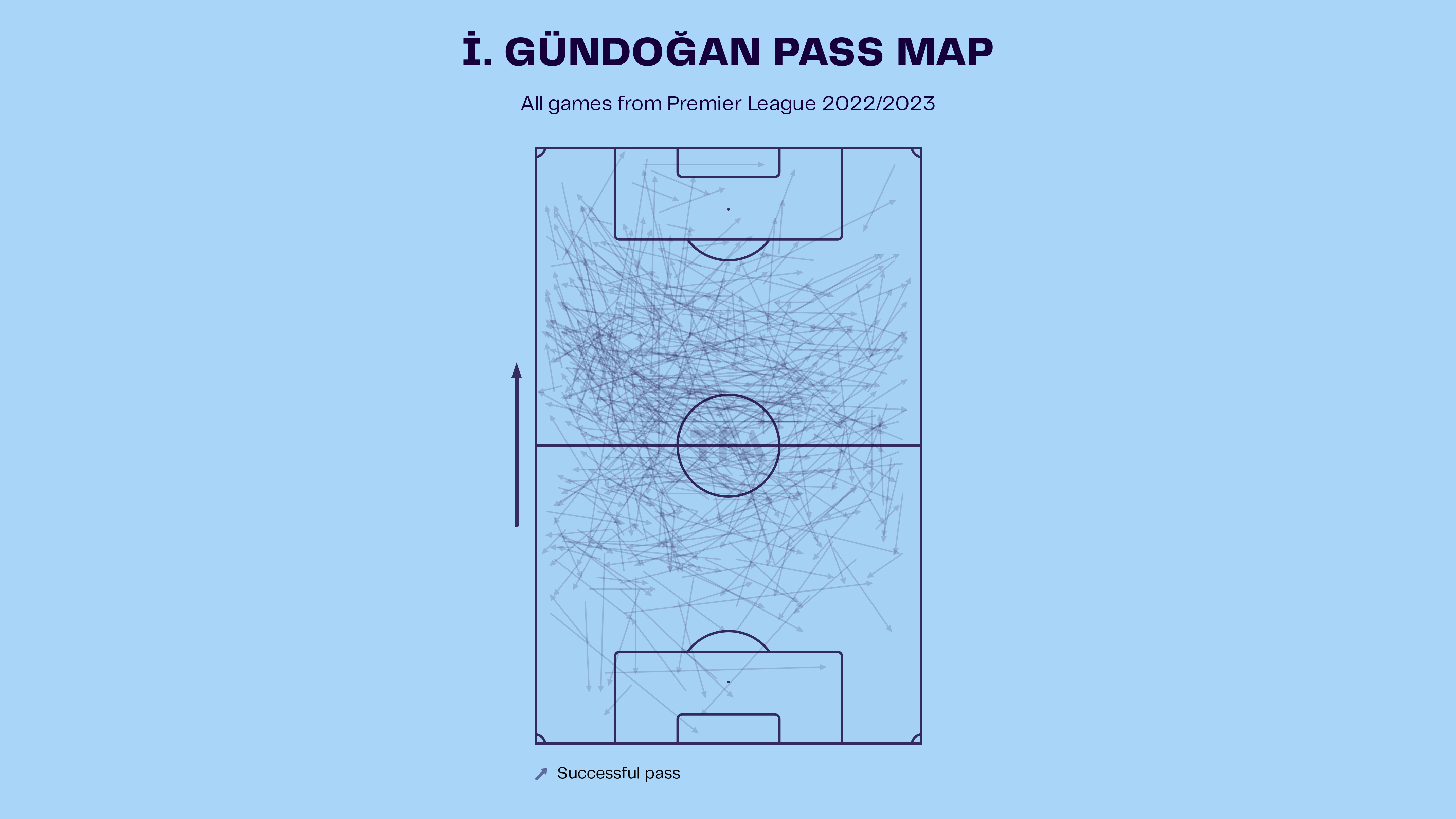 The number six role is of utmost importance in Barcelona’s system, as that is the player who connects the defence to the attack. Sergio Busquets has done an excellent job for Barcelona in that position and has established a model for how to play in that position. But with the evolution of the game into a faster-paced one and with Busquets’ ageing, Barcelona is looking for options to replace him. One rumour has it that Barcelona is interested in replacing the Spanish veteran with Manchester City midfielder Ilkay Gundogan. The 32-year-old German international could prove to be a perfect replacement for Busquets with his perfect ratio of attacking and defensive skills.

We look at some stats to understand how Ilkay Gundogan can help Barcelona if they sign him.

Ilkay Gundogan has played 12 matches this season, starting ten and coming off the bench in two matches. He has scored two goals and has two assists to his name in the Premier League. Gundogan is a big-game player and could prove to be priceless if he joins the Blaugranas. 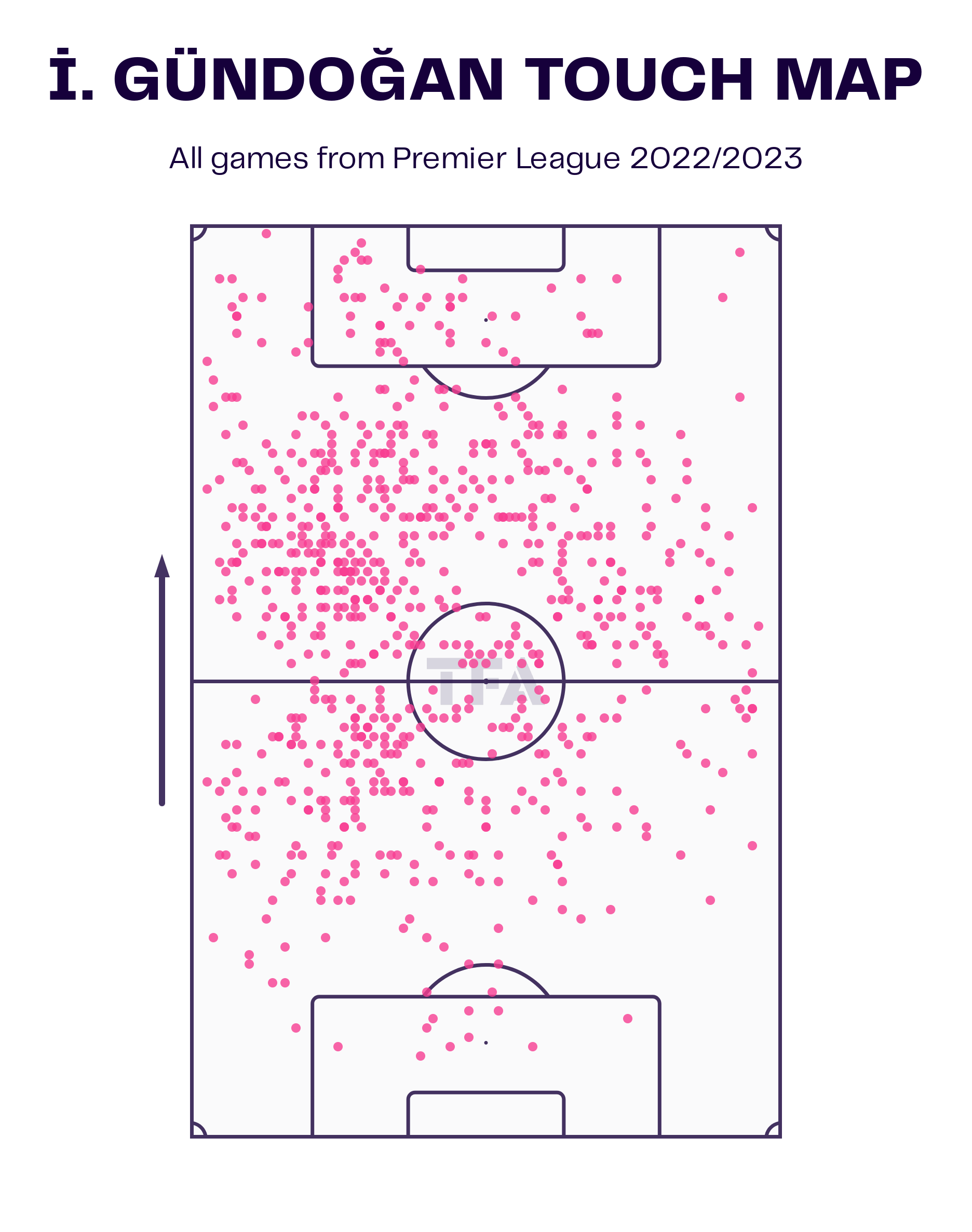 The above viz shows the touch map of Ilkay Gundogan for Manchester City. We can observe how he stays at the heart of the midfield most often and goes up and down. He is brilliant at finding spaces to occupy and also gets into half-spaces. Cool and calm under pressure, Gundogan will add a great combination of composure and precision to the Barca midfield. He also gets into the penalty box with some bursting runs and enjoys an average of 2.57 touches in the penalty box. He has scored some important goals for Manchester City with his entries into the box. 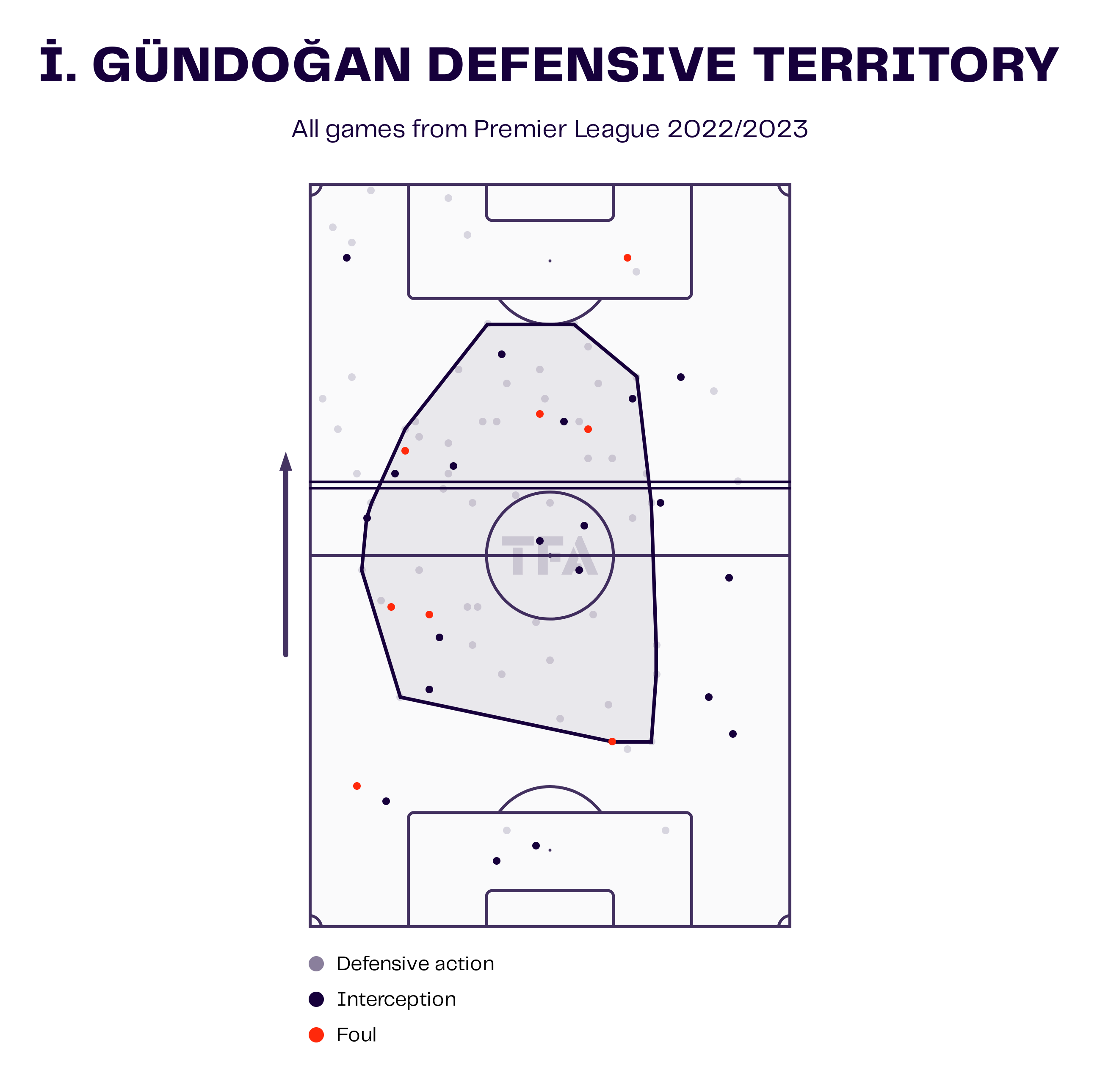 The above viz shows the defensive territory of Ilkay Gundogan. He usually stays central and contributes defensively as well. His awareness and reading of the game help him anticipate movements and cut-out passes. He makes an average of 2.73 interceptions per game and wins back possession. Gundogan also gets involved in 3.44 defensive duels per game with 60.3% success and 1.63 aerial duels with 56.7% success. Moreover, he makes around six recoveries per game, with 61% of them in the attacking half. Gundogan will have to be very alert defensively if he is to make the move to Camp Nou, as teams have hurt them in the past through quick counterattacks. 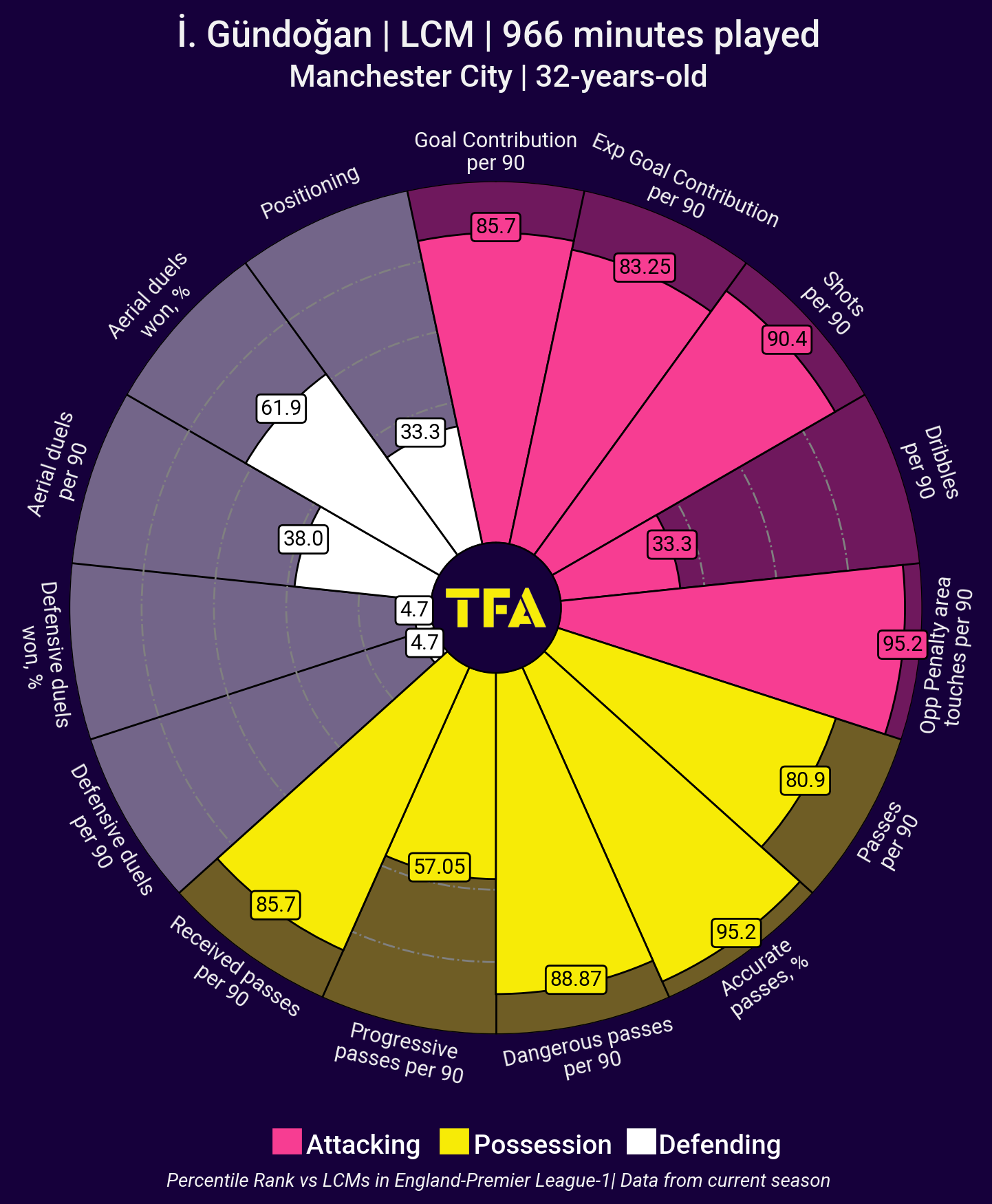 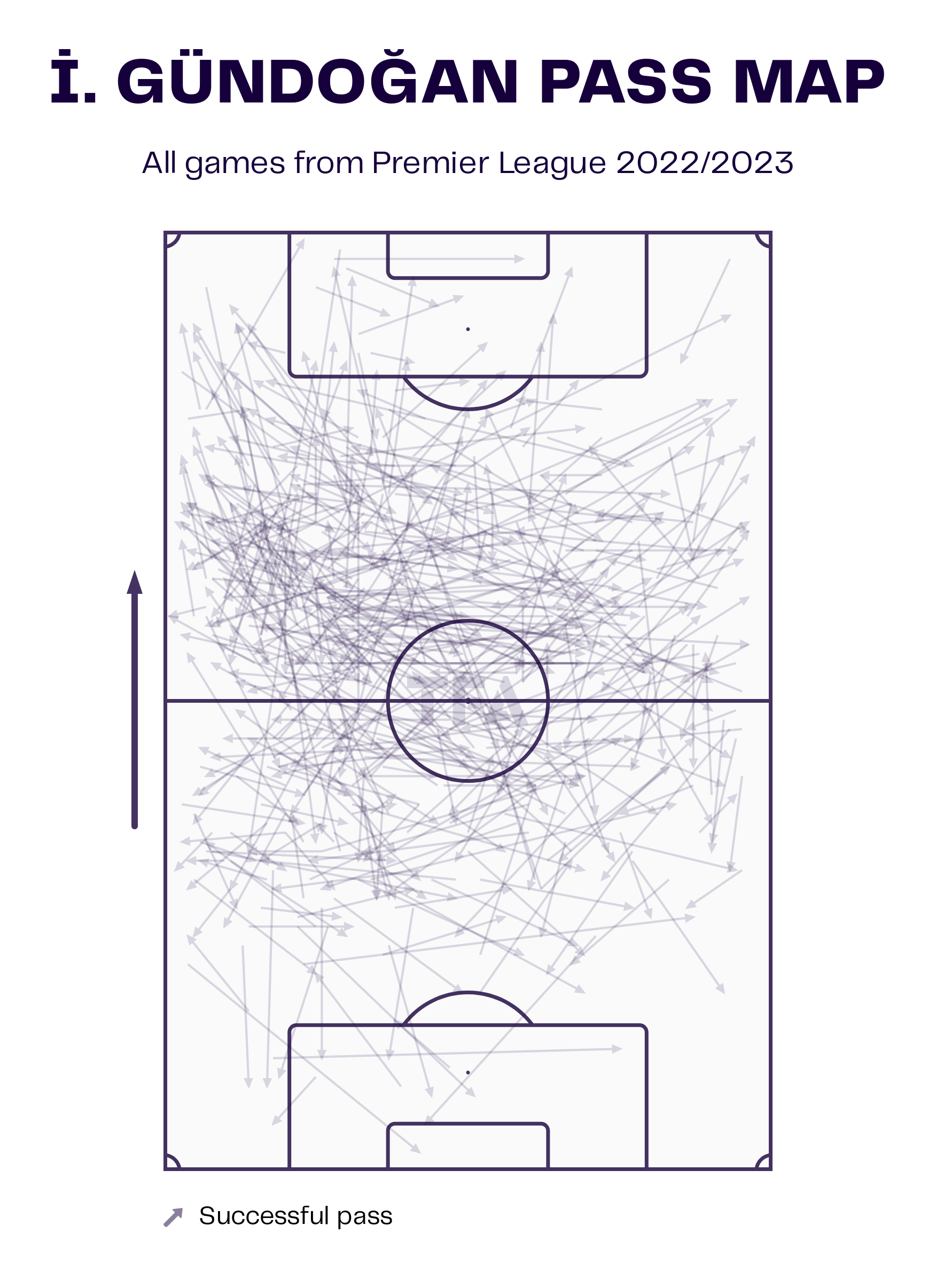 Ilkay Gundogan is one of the best passers in football and has incredible passing skills. The 32-year-old has a passing accuracy of 90.9% and completes around 62 passes per game. He could fit into the single pivot role at Barca easily with his passing skills. In addition, Gundogan plays an average of 8.53 passes into the final third with a success rate of 83.3%. He also makes around 2.24 passes into the penalty box per game. 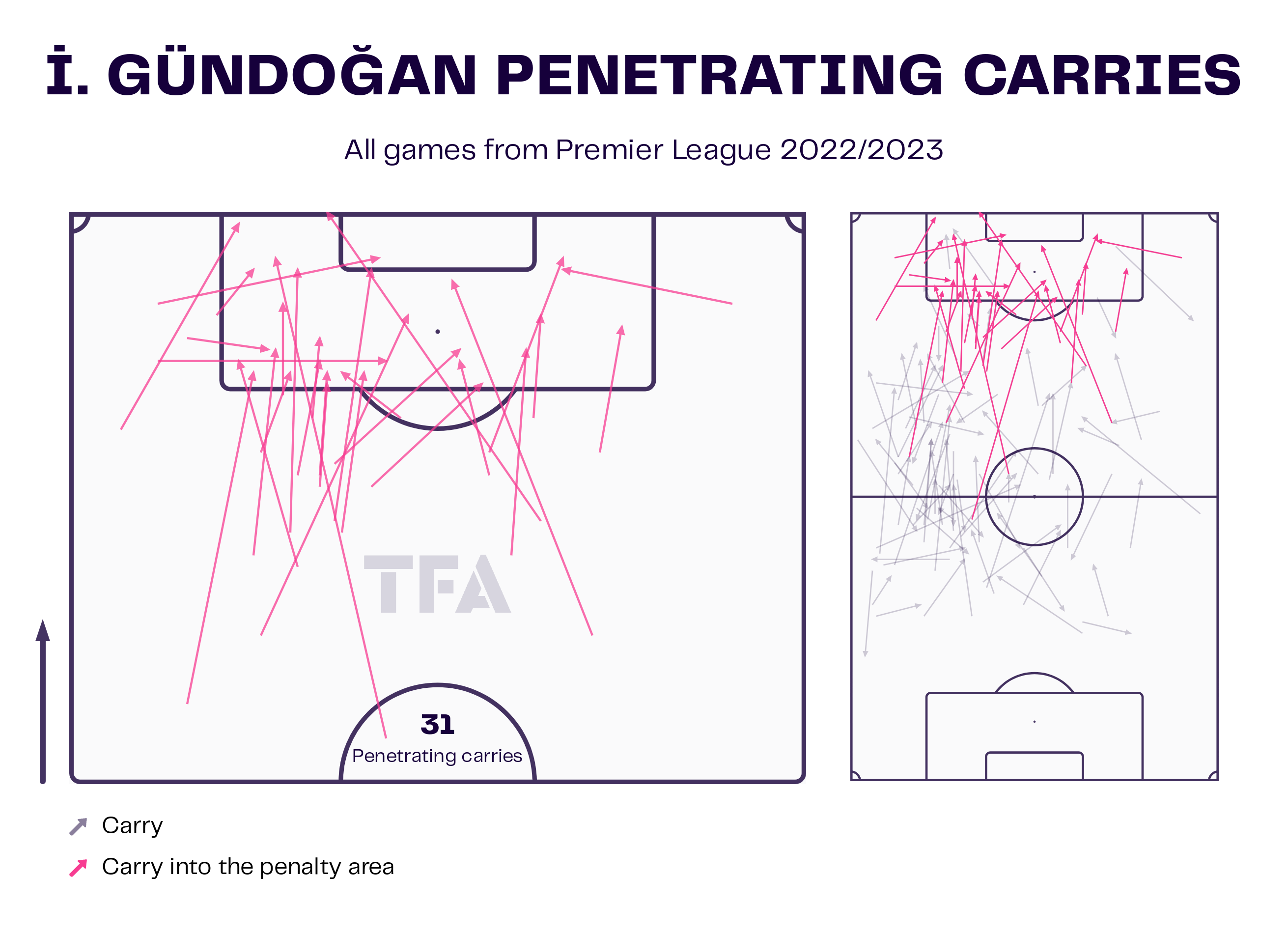 One of Gundogan’s skills, which can be considered an upgrade from Busquets, is his ball-carrying ability. He averages around 1.37 dribbles per game and has a success rate of 56%. Gundogan has made 31 penetrating carries this season for Manchester City. This ability will help Barca, particularly against low-block teams in La Liga. Gundogan also makes an average of 1.91 progressive runs per game. 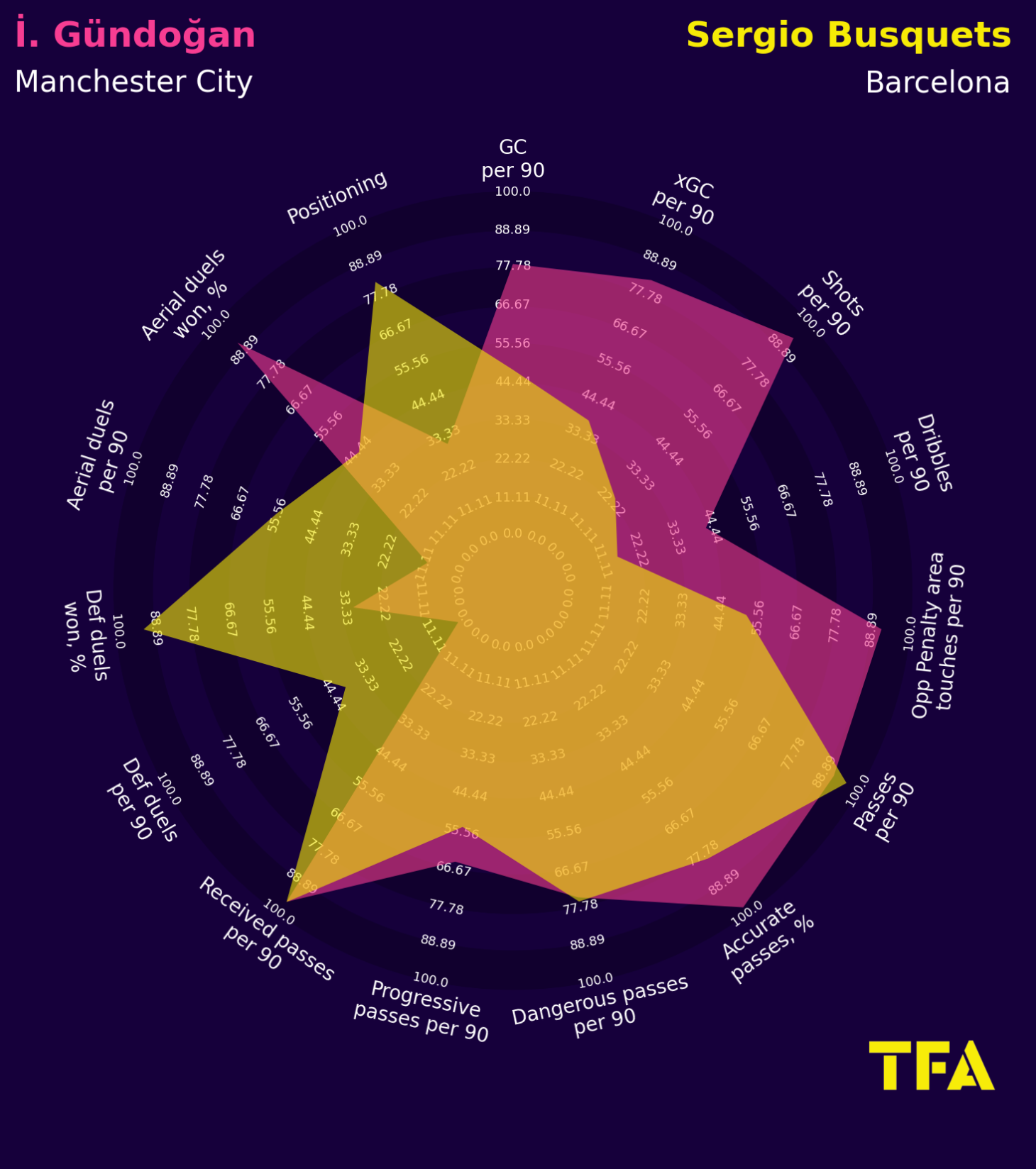 The above viz compares the radars of Sergio Busquets and Ilkay Gundogan. We can see from the graph that Gundogan provides a better attacking option. However, stats indicate that Sergio Busquets still has the upper hand defensively. But it will be almost a like-for-like change if Gundogan arrives at Camp Nou.

Ilkay Gundogan is 32 years old and therefore not the right long-term option. However, his addition to the side will give Xavi stability, composure, and a champion mentality in the middle of the park. It shouldn’t take him long to adjust to Barcelona’s style of play, as he has experience playing under Pep Guardiola. If Barcelona manages to sign the player, it will be an excellent addition to their midfield.

Under the microscope: Why a move to Valencia for game time...

Athletic Bilbao is an emotion, an enigma

What happens after the season ending injury to Marco Asensio ?