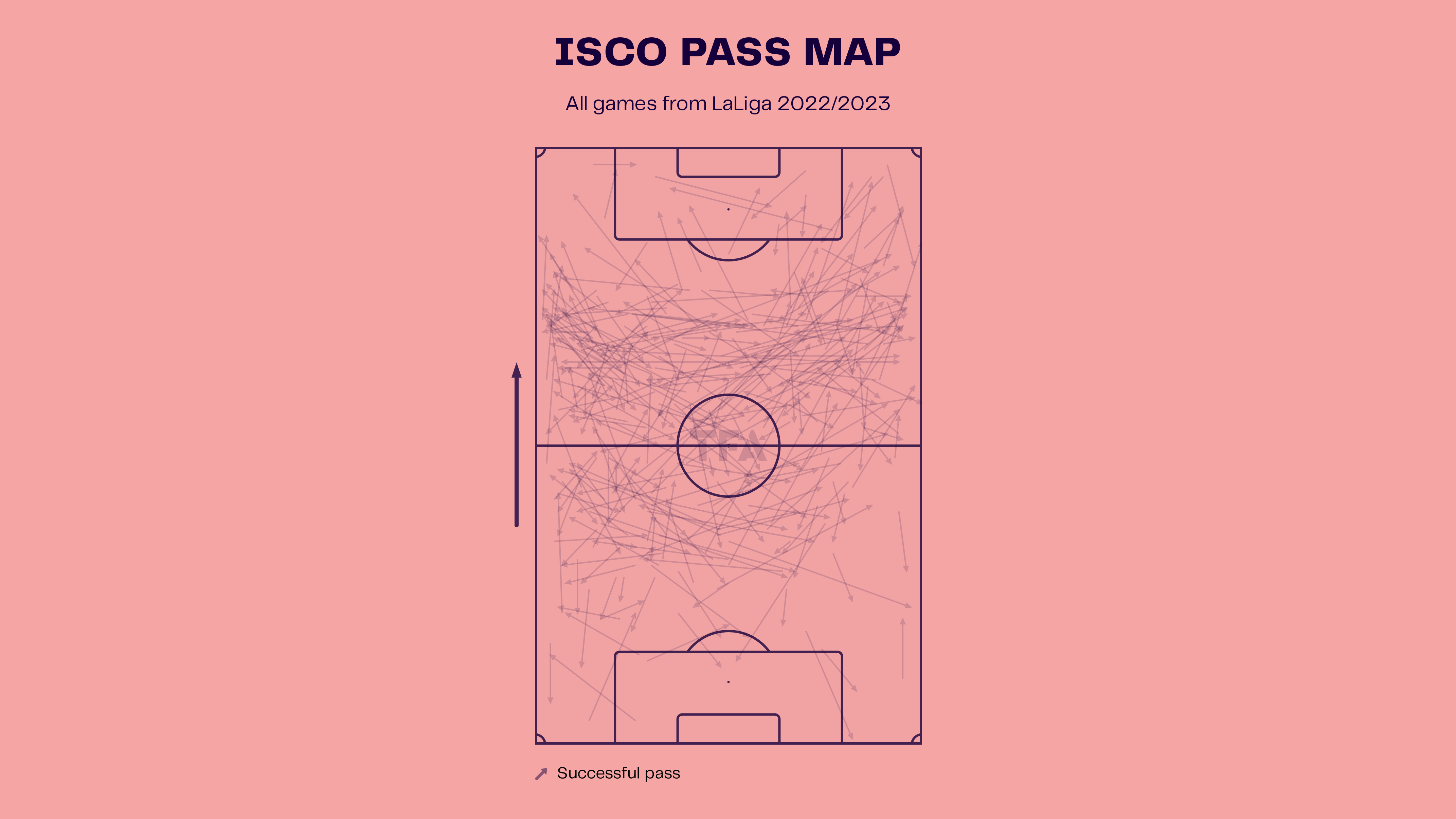 Isco Alarcon is probably one of the best talents Spain has produced in the last decade. He has won everything during his time at Real Madrid. He is a five-time winner of the UEFA  Champions League and a three-time winner of La Liga with Real Madrid. But Isco has looked like a pale shadow of himself over the past few seasons and made the transfer to Sevilla to rescue his career. However, the move has not made things any better for the Spanish international, as his new home side is in the 18th position with just 11 points from 14 matches.

We take a look at some stats to understand how the move to Sevilla has been a failure for Isco.

Isco Alarcon has played 12 matches for Sevilla this season in La Liga and is yet to score a goal. The former Real Madrid player started ten matches and came on as a substitute in the other two matches. Isco has made two assists this season so far. 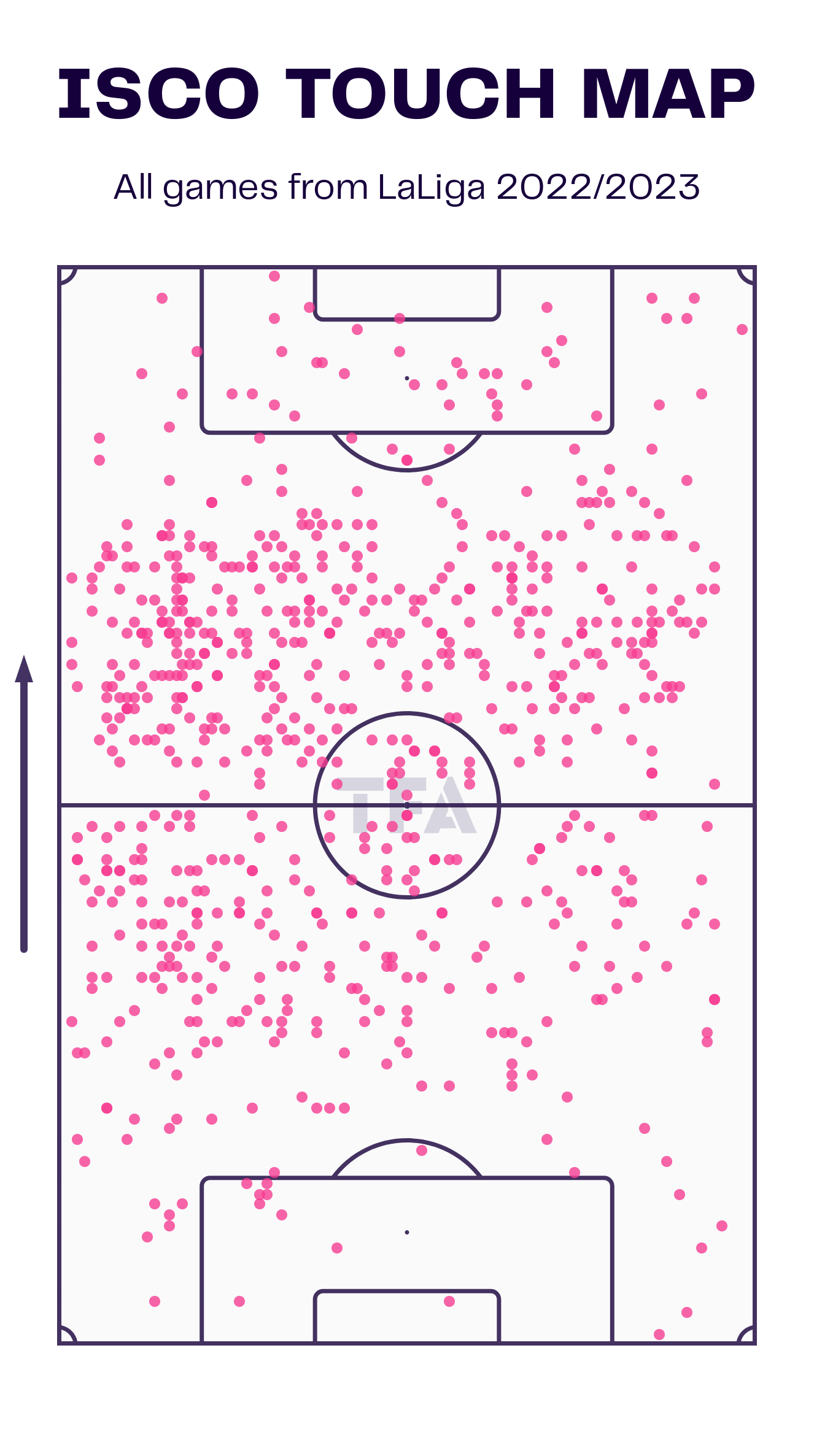 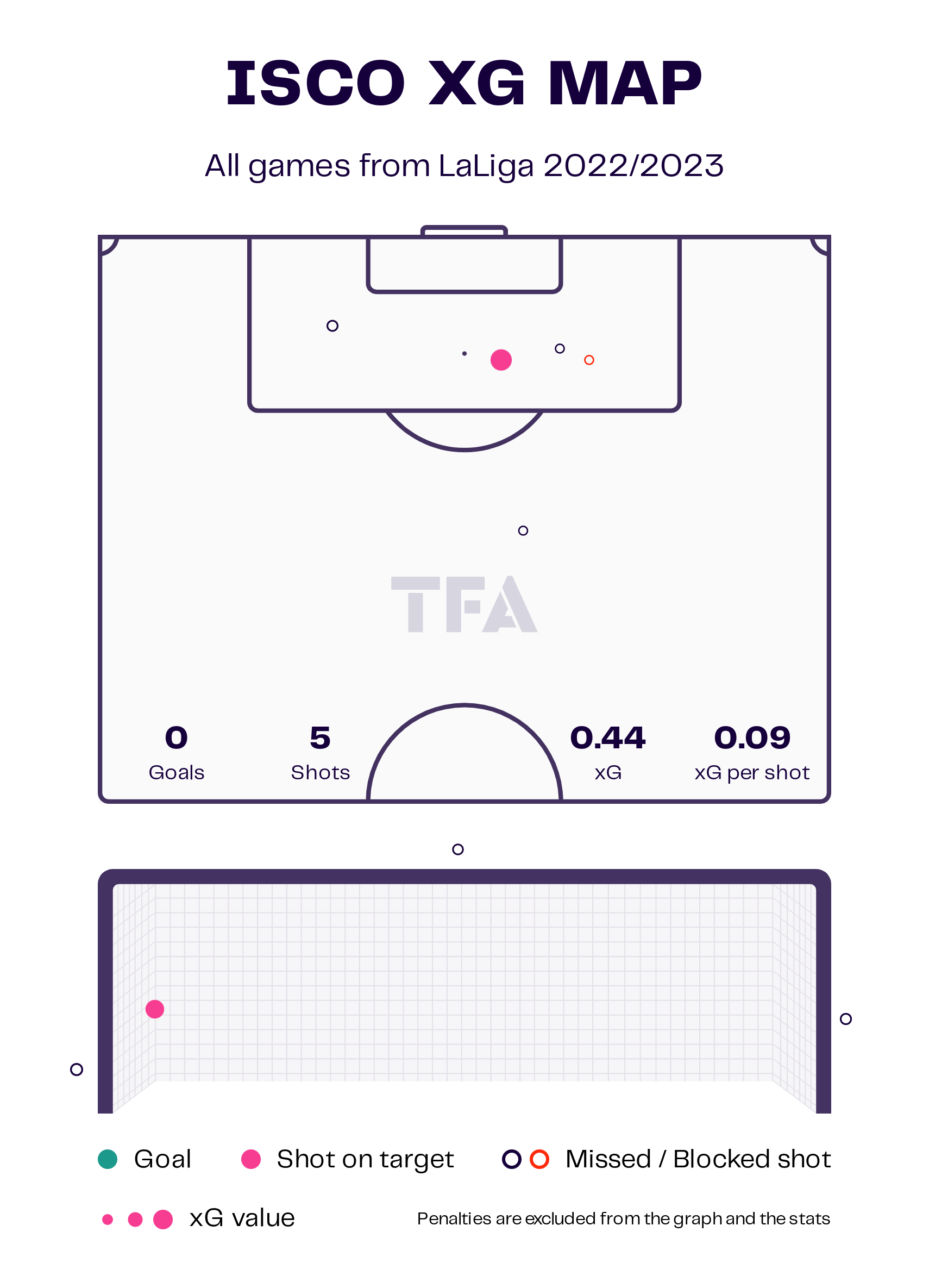 The first viz shows the touch map of Isco for Sevilla this season. We can observe from the touch map that he is someone who likes to stay in the attacking half of the pitch and orchestrate the game from there. However, he hasn’t been able to pull the strings as much as he would like, as he has only two assists to his name this season. He also gets into the opponent’s penalty area and has 2.13 touches there as well.

The second viz shows the xG map of Isco Alarcon. He has tried just five shots this season without scoring from any of them in La Liga. He takes an average of 1.33 shots per game with 45% accuracy and has failed to convert any of those shots into goals. This is down from an average of 1.89 shots per game with 28.6% of them on target. He has scored once in the Champions League, against FC Copenhagen. 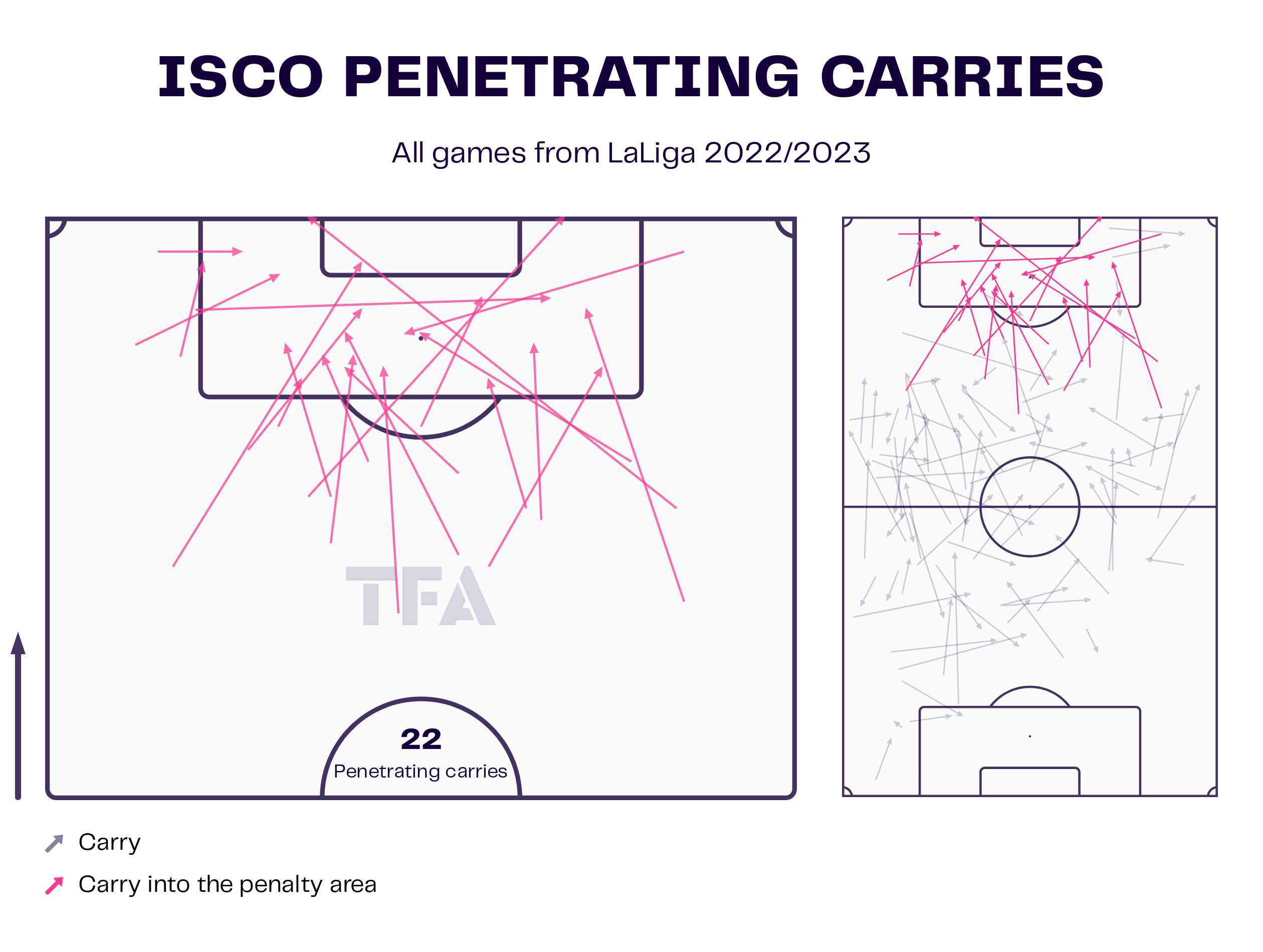 The above viz shows Isco’s penetrating carries this season for Sevilla. He has made 22 penetrating carries but has not been able to inspire a magical moment to lift his side. He averages around 3.2 dribbles per game with a 58.3% success rate and makes 1.4 progressive runs as well. However, Isco used to make an average of 4.58 dribbles per game and 3.1 progressive runs per game on average last season. We can observe how he brings the ball into the penalty area from the half-spaces and attacks centrally. The lack of a central figure in the forward line has not helped them either. 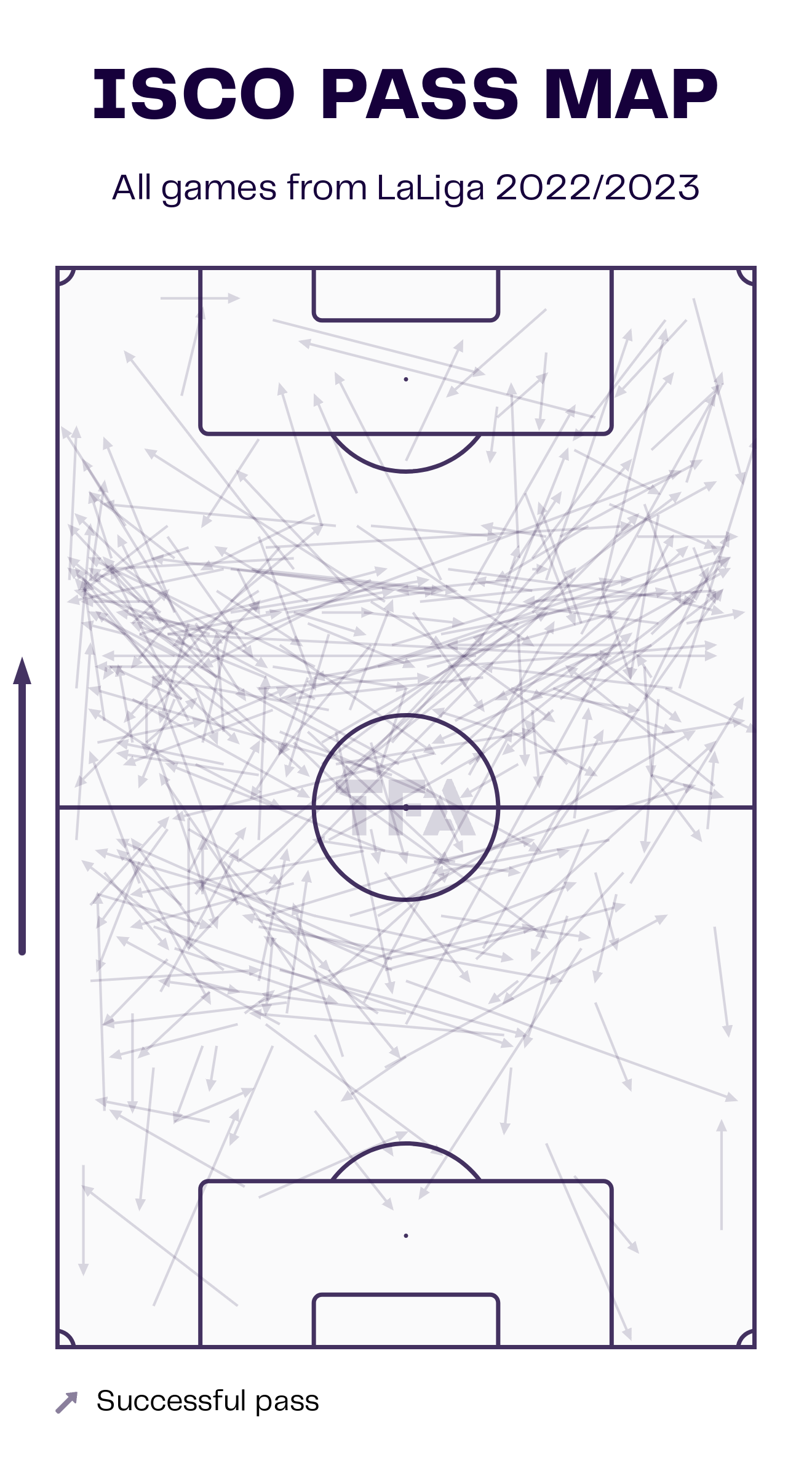 Passing is undoubtedly one of Isco’s best attributes. He was even regarded as the one to follow Iniesta’s path for La Roja. He has a good passing accuracy of 88.1% and makes around 39 passes per game. This is down from 56 passes last year with 90.5% accuracy. Even though the passes are not inaccurate, the play has not gone through as much as it did when he was at Real Madrid. He averages 5.33 passes to the final third with an accuracy of 81.3% and 2.07 passes to the penalty area. This has also, however, come down from 7.95 passes into the final third last year. 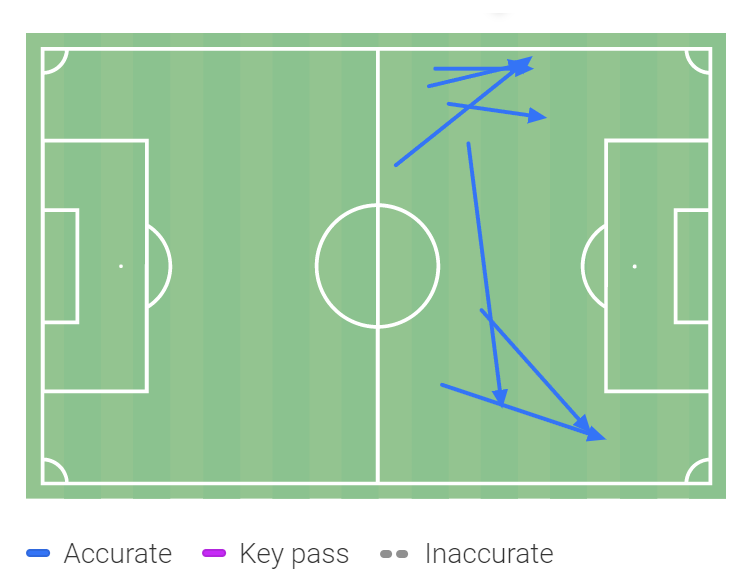 Isco’s move to Sevilla was to revive his career, but he has so far not been able to do anything significant to do so. Isco’s decline remains one of the most interesting and sad stories, as he is a player with such potential and technical abilities. His fate, however, had other plans and has not been on his side for the last couple of seasons. The move to Sevilla has also proved to be a failure for him, as he has not been able to influence the game as he wants. Isco Alarcon is not named in the World Cup squad for Spain and will be trying to utilise this break to get back to top form.

‘Future of Real Madrid’- Real should loan this youngster out in...

Under the microscope: Why Joselu’s form will be crucial for Espanyol...