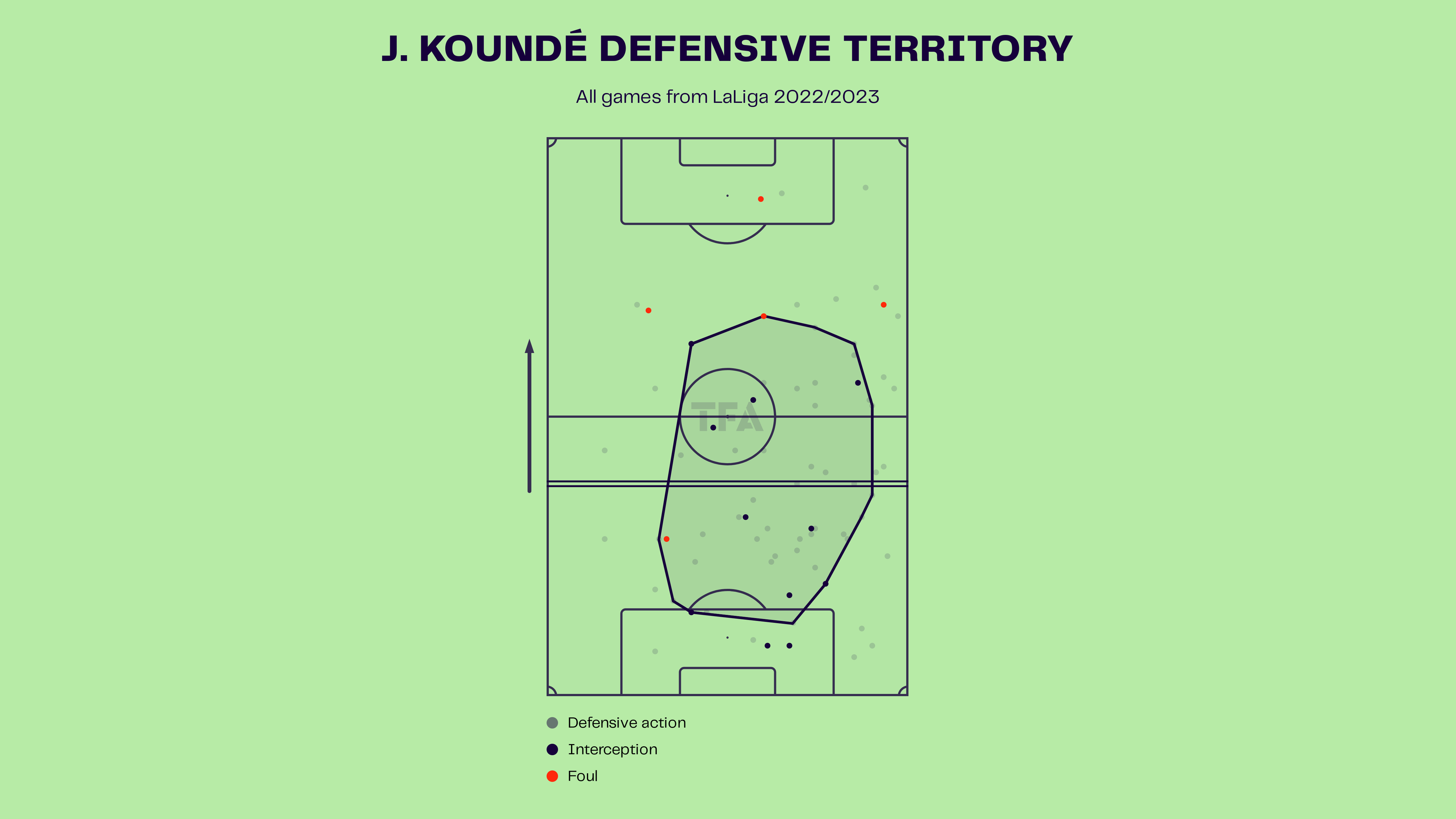 One of the names that Xavi Hernandez was keen on in the summer transfer window was Jules Kounde. Barcelona needed reinforcement at the back, and Xavi was sure that the Frenchman could do just that. Ever since moving to the Catalan capital, Jules Kounde has become an integral part of Barca’s back four. His versatility, passing range, and composure under pressure has helped him earn Xavi’s trust.

We take a look at some stats to understand how Jules Kounde has had an impact on Xavi’s defensive ideas. 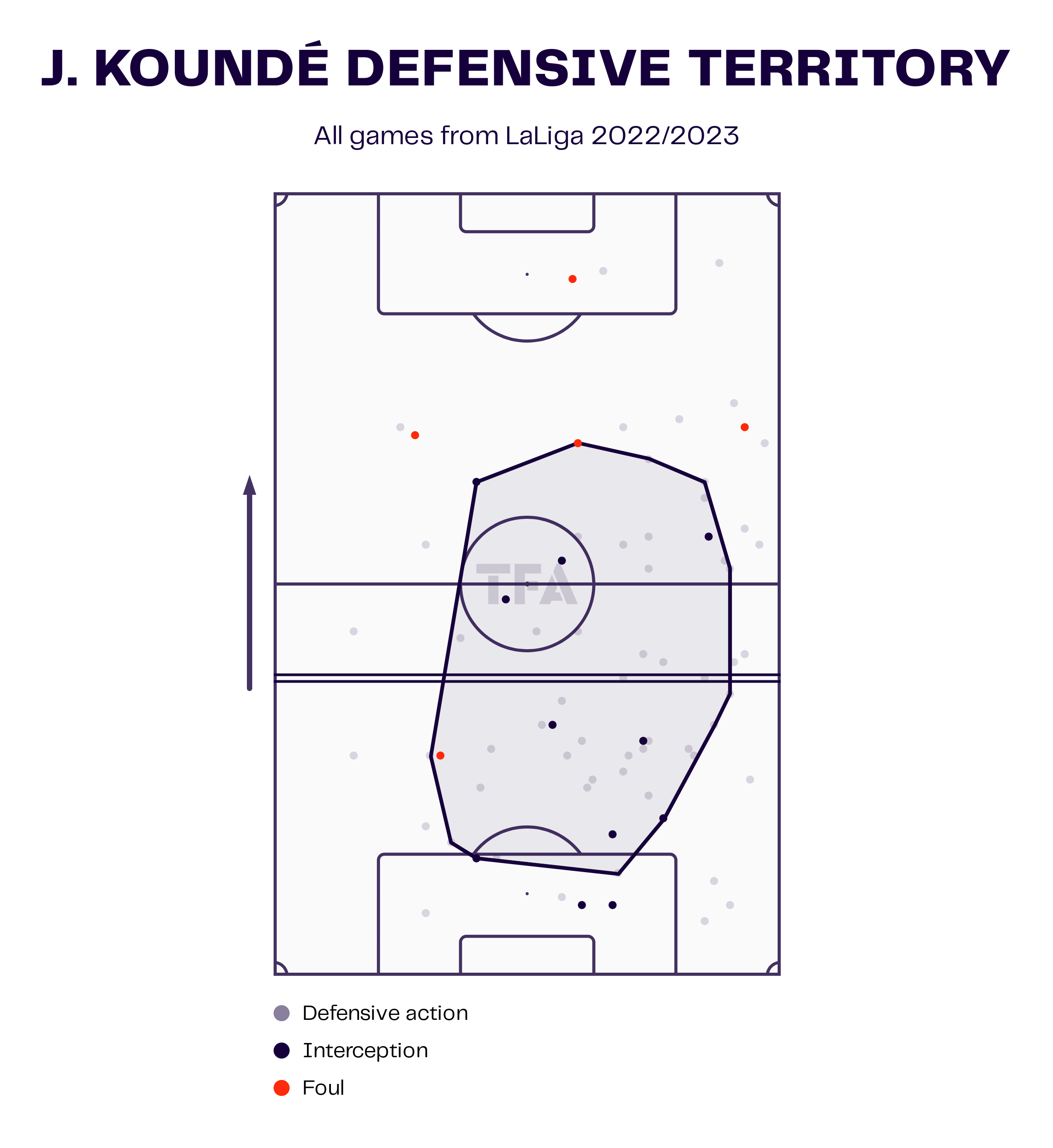 Jules Kounde has been used by Xavi as both a right centre-back and as a centre-back as well. His cool and calm nature has been crucial in playing the ball out from the back. He has built a good partnership with Ronaldo Araujo and makes a formidable backline for Barcelona. Kounde makes around 2.96 interceptions per game and makes around 7.9 recoveries per game as well. He is fast and is therefore able to track back and defend when a quick attack emerges as well. 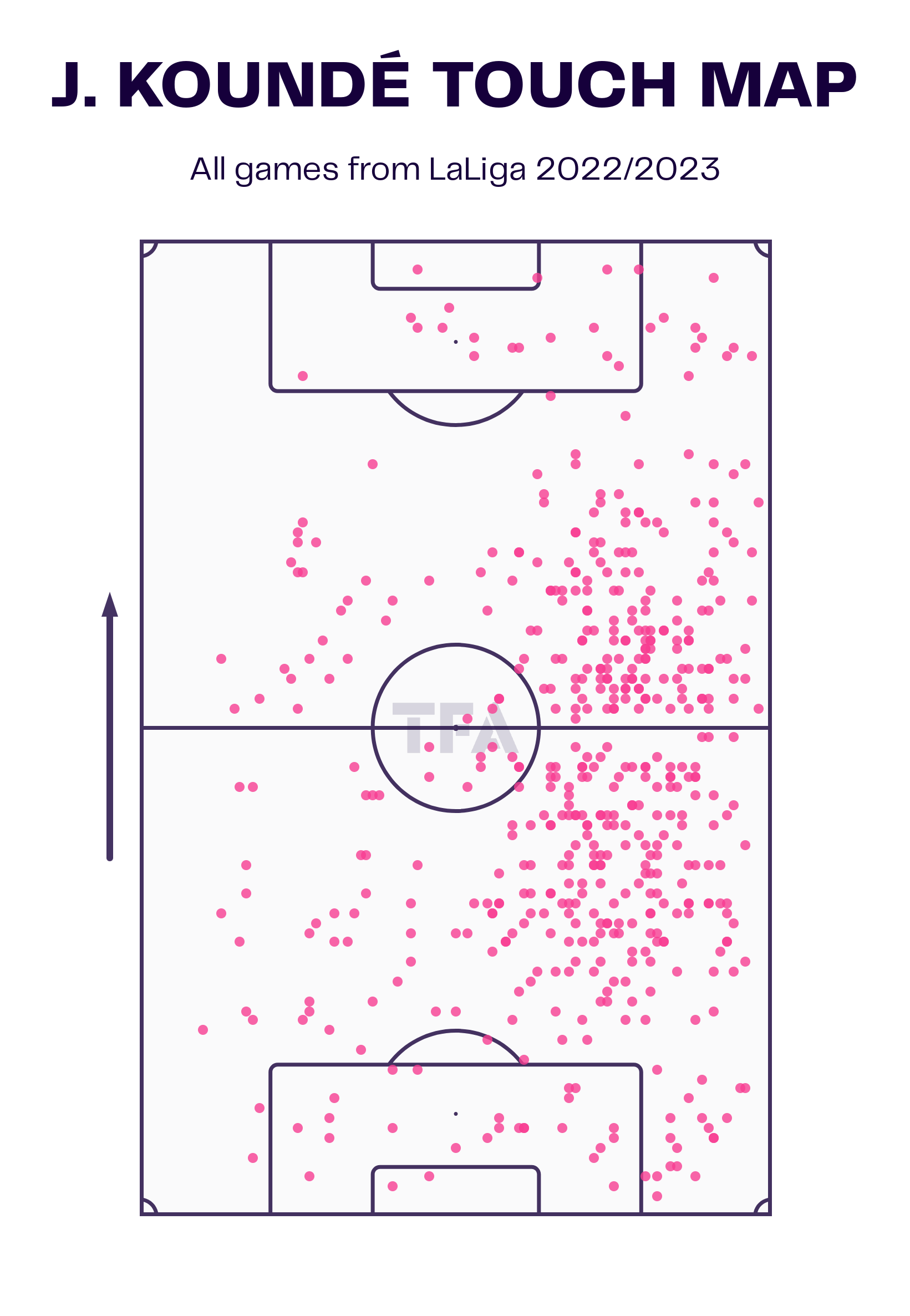 The above viz shows the touch map of Jules Kounde for Barcelona this season. We can observe from the viz that when he plays as a centre-back, he stays more centrally, covering the central parts of the field, and stays high when defending. But when he plays as a right-back, as he has on some occasions, he overlaps and gets into the attacking third as well. 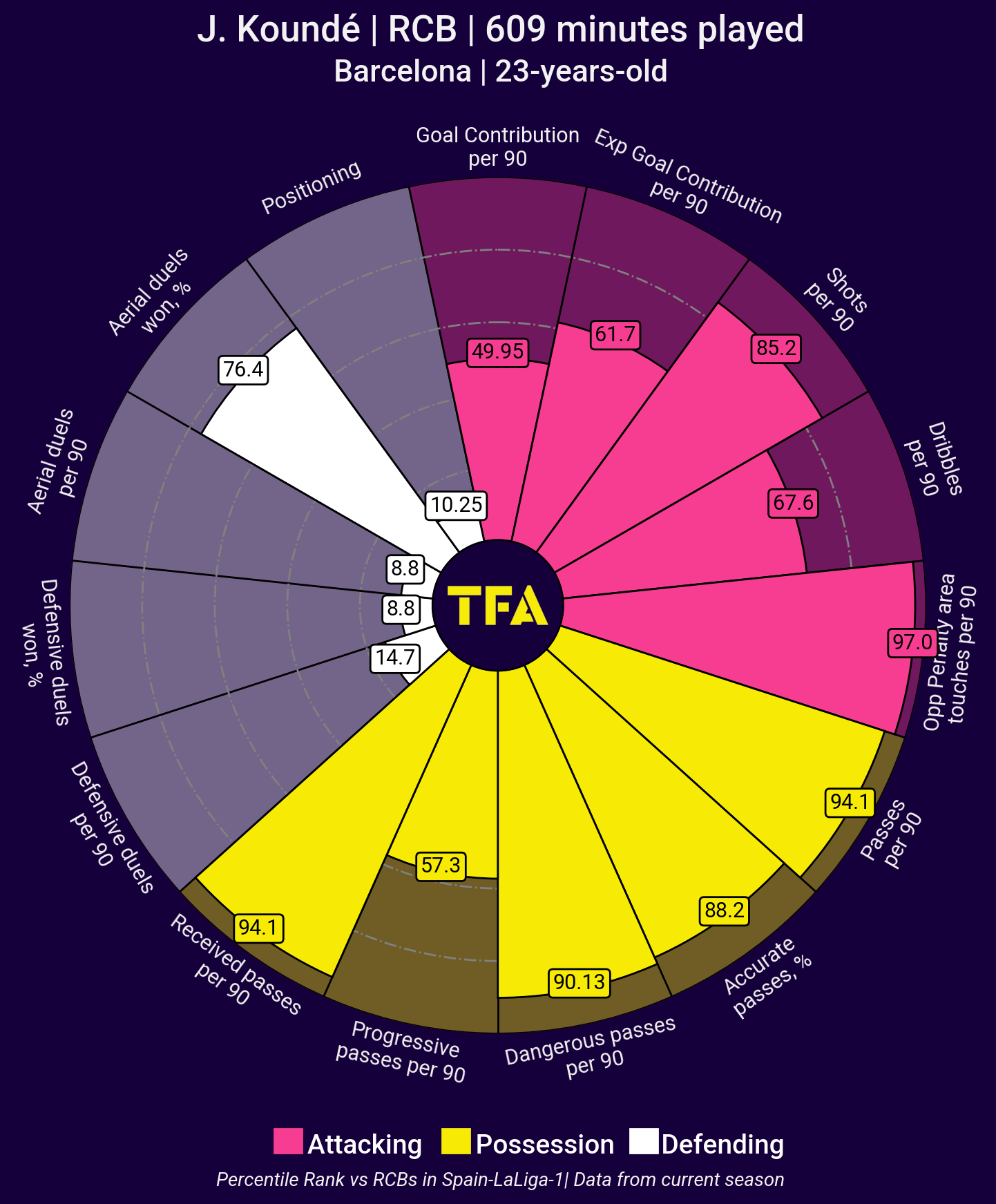 The above viz shows the percentile rank of Jules Kounde compared to other right centre-backs in La Liga. As the pizza chart suggests, he has some incredible stats and is ranked among the top 97 percentile for touches in the opposition penalty box and the top 90.13 percentile for dangerous passes as well. The 24-year-old is also ranked in the top 85.2 percentile for shots per game, which is amazing for a defender. He is also ranked well for his passing accuracy and aerial duels as well. 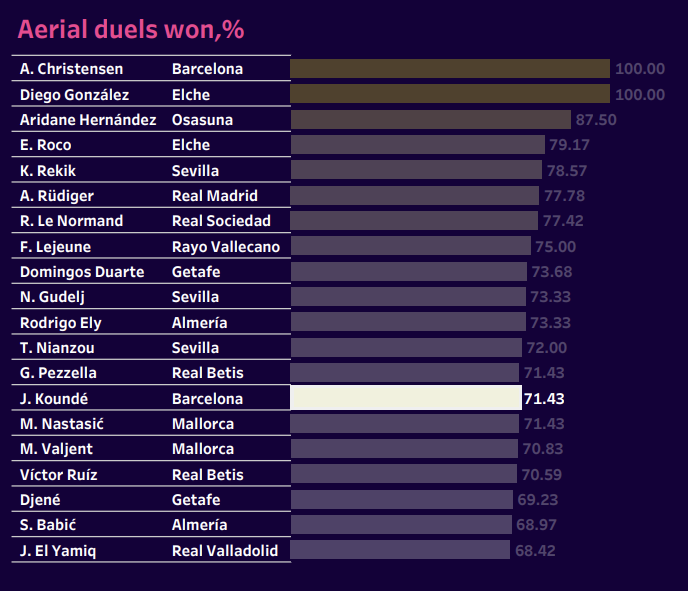 Jules Kounde has a success rate of 71.3% when it comes to aerial duels. He makes an average of 2.07 aerial duels per game and 3.25 defensive duels with 50% accuracy as well. Kounde is a strong player as well. He uses his strength to win aerial duels and has a headed assist from a corner as well. 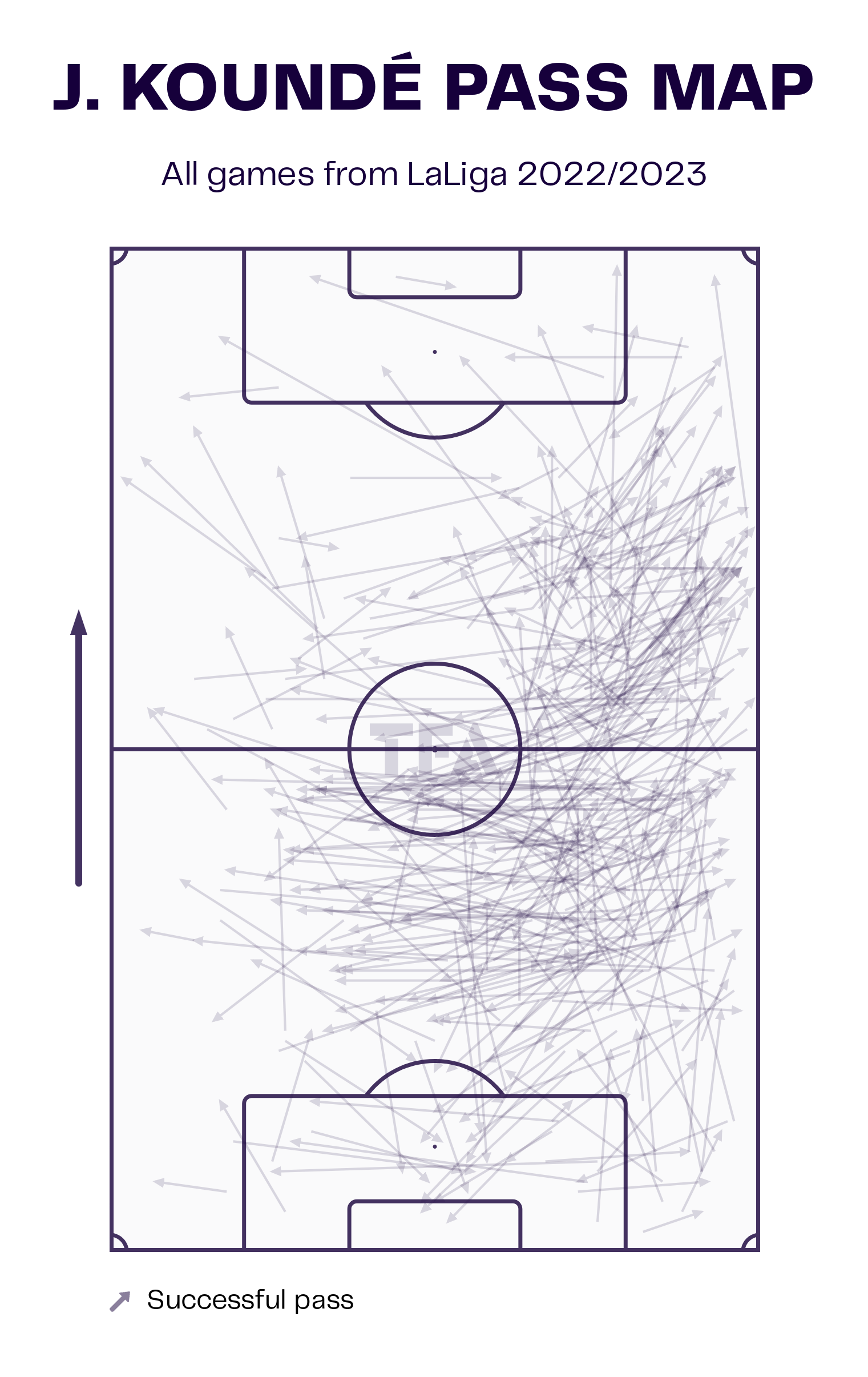 As Barcelona is a team that likes to play out from the back, the central defenders must be good at passing. Xavi, therefore, has made the right decision by signing Jules Kounde as the Frenchman has some amazing passing stats. Jules Kounde is ranked among the top 88.2 percentile when it comes to accurate passes and the top 90.13 percentile for dangerous passes. He also makes around 10.64 passes into the final third per game with 84.7% accuracy. The Frenchman is also capable of providing some good passes into the penalty box and plays an average of 1.7 passes into the penalty box per game. The assist for Lewandowski in the game against Sevilla is an example of that.

Jules Kounde has proved to be the ideal centre-back for Xavi’s system at Barcelona. His cool nature, combined with his ability to find the right pass and his versatility to play as the right-back as well, has helped Xavi immensely to bring stability at the back. With many of the centre-backs injured, Kounde provided Xavi with some relief with his assured presence at the back.

How Barcelona encouraged with Lionel Messi benched vs Real Madrid

Girona defeated but not humiliated by Barcelona at Montilivi