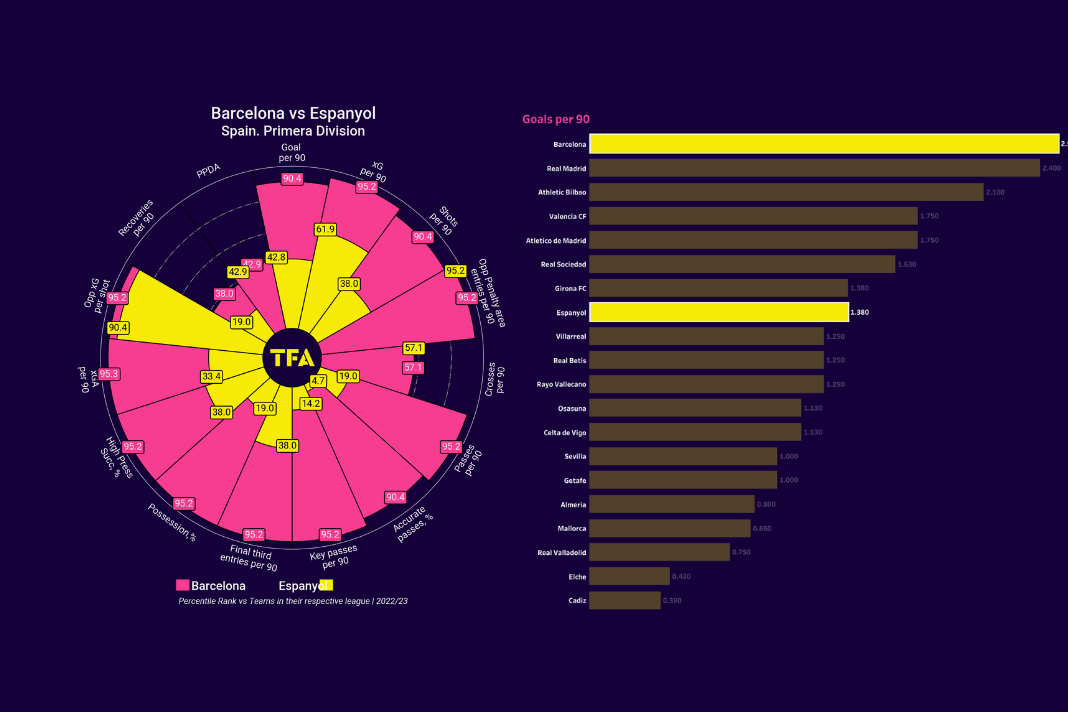 The Catalan derby will officially flag off the second half of La Liga for both Barcelona and Espanyol as the former welcome their neighbours onto their turf. Barcelona, who currently sit atop the table, will be looking to extend their lead, while Espanyol, who currently sit in 16th place, will be hoping that this tense match will turn their fortunes around.

Barcelona’s first season under Xavi Hernandez has been a great success domestically. After crashing out of the Champions League group stages for the second consecutive time, the Blaugranas will be looking to win the La Liga trophy. With 33 goals from 14 matches, Barcelona is the team with the joint-highest number of goals this season, along with Real Madrid. Moreover, they have kept 11 clean sheets and have only conceded four goals in the league so far.

On the other hand, Espanyol have had a contrasting start to the season. They are in the 16th position with just 12 points from 14 matches. They have only scored 16 goals and conceded 22. The fact that they are winless in their last five matches will hurt them, and they will be looking to start changing things.

We now look at some stats that could predict the match’s outcome. 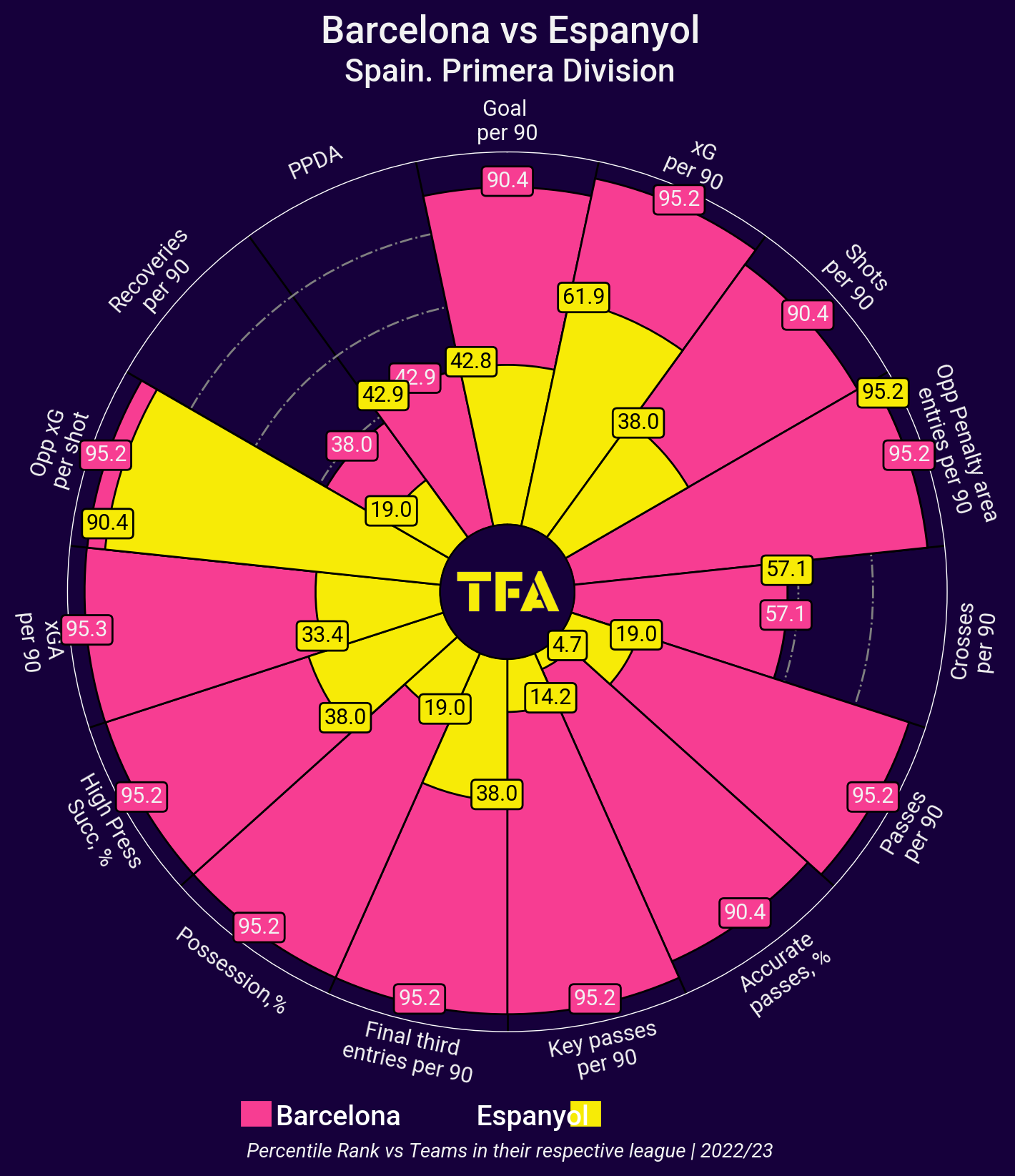 Barcelona have been excellent in all departments in La Liga. They have managed to limit their defensive worries to Europe as they have the best defensive record of the season, having conceded the least number of goals (four). They have also found a guaranteed goal scorer in Robert Lewandowski, who has racked up 13 goals in La Liga. However, he will miss this clash due to a red-card suspension. On the other hand, Espanyol have had a complete contrast, as they have conceded six goals more than they have scored. They are ranked below average in goals per 90 minutes. 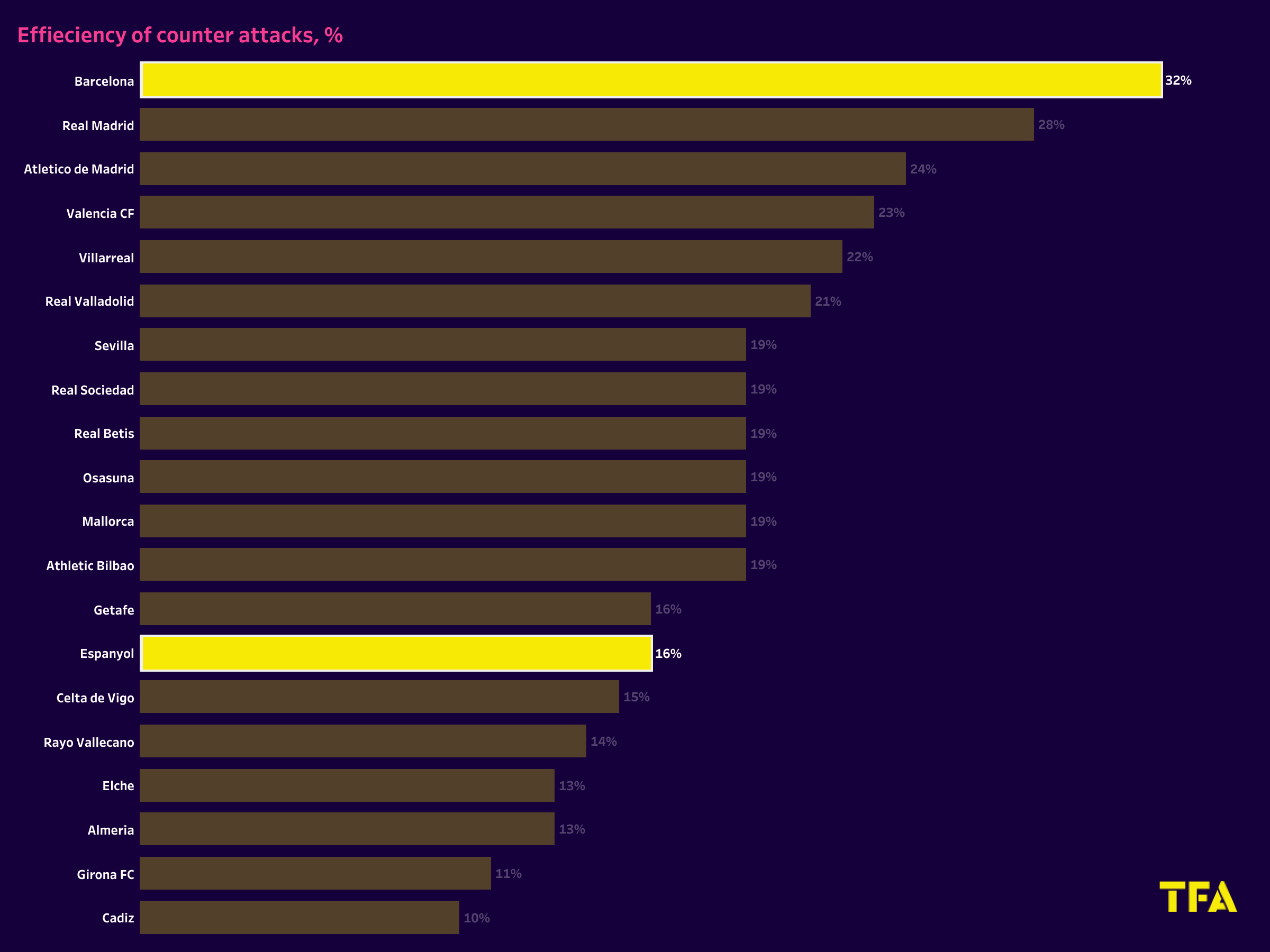 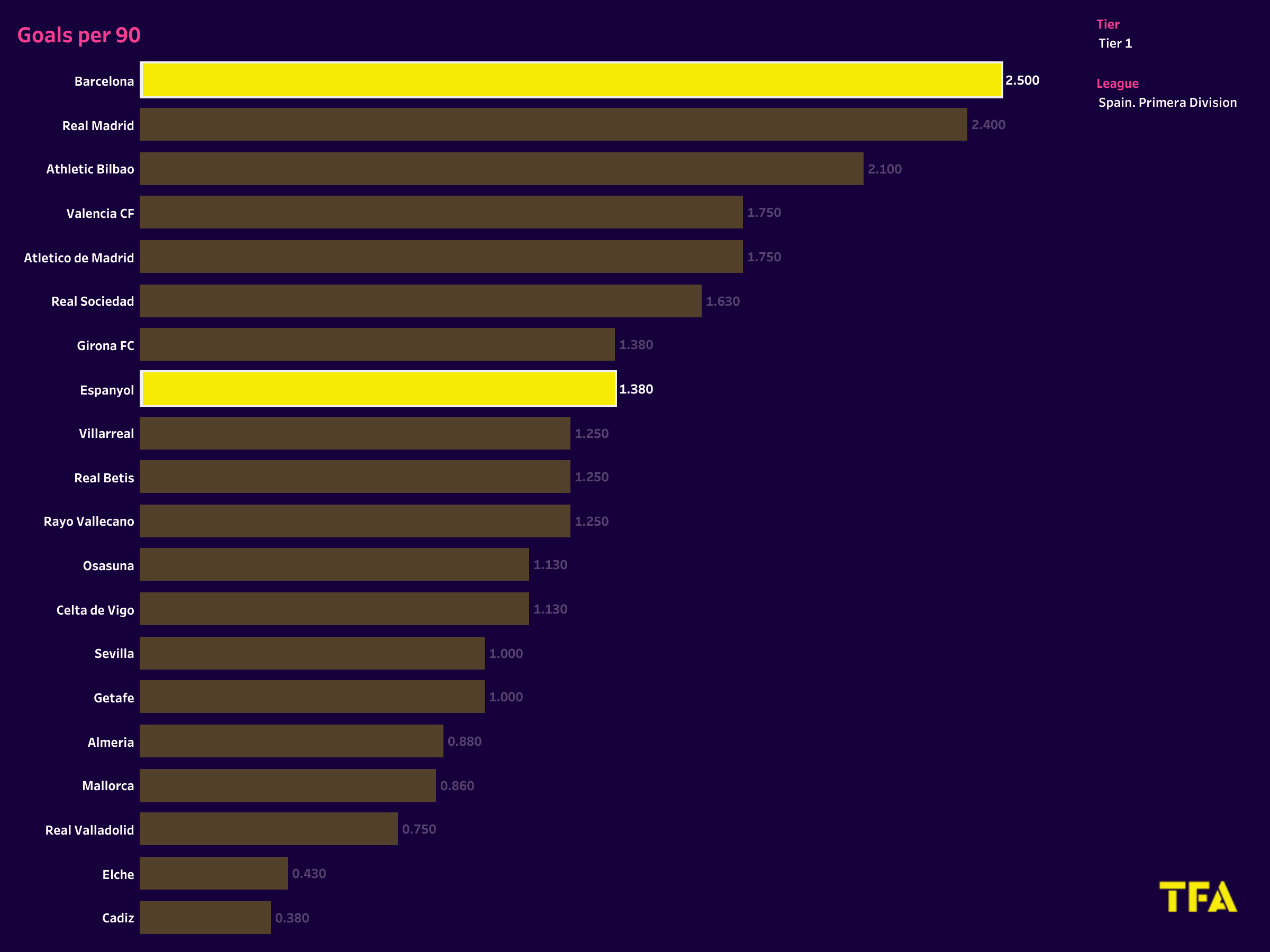 High recovery rate in the attacking half 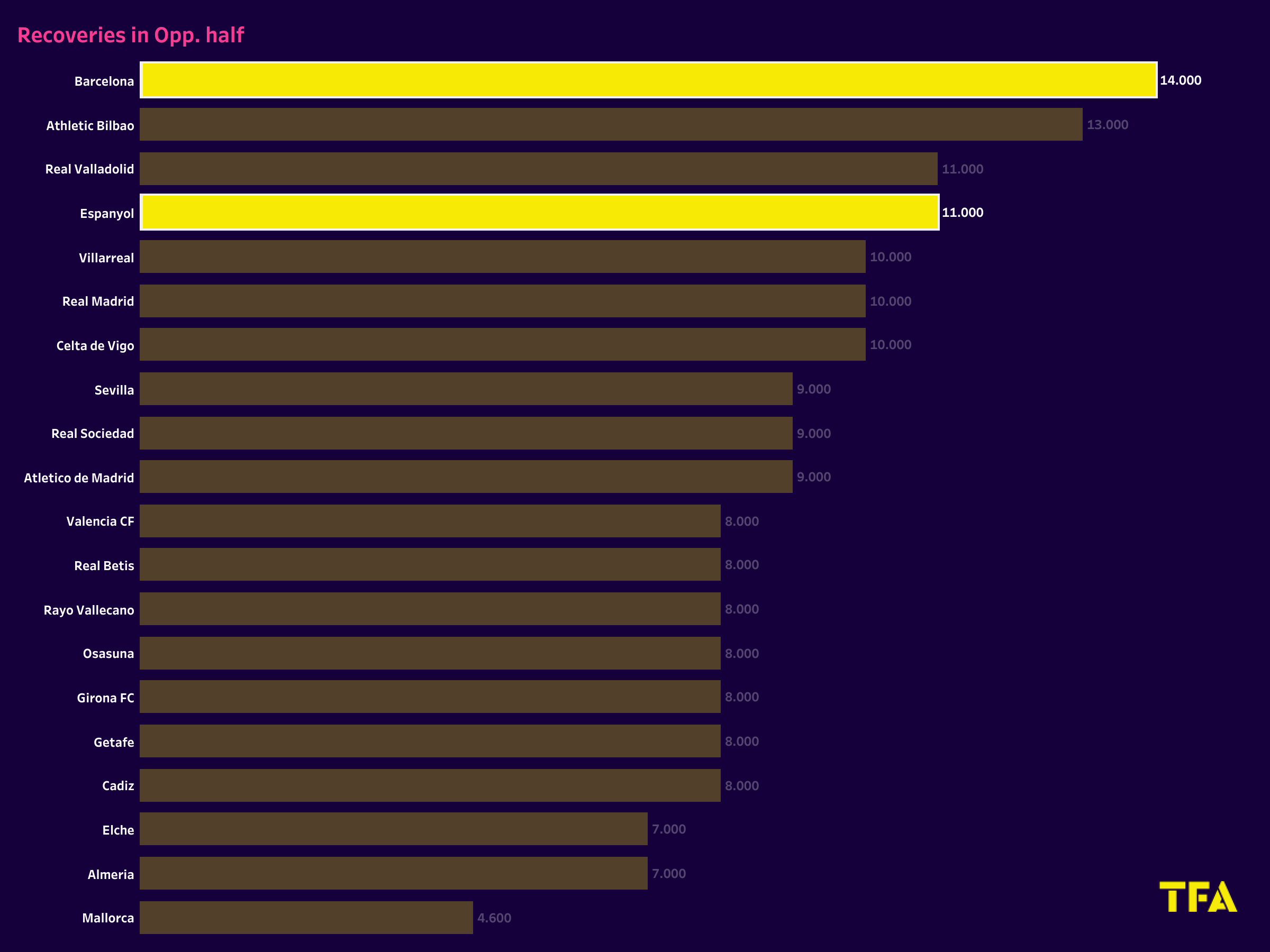 Barcelona leads the list with 14 recoveries in the attacking half, while Espanyol is not far behind with 11. This is no surprise, as Barcelona is a team that depends a lot on counter-pressing and is ranked in the top 95.2 percentile for high press success rate. They make around 74.71 recoveries per game, while the visitors make around 80.29 recoveries per game. 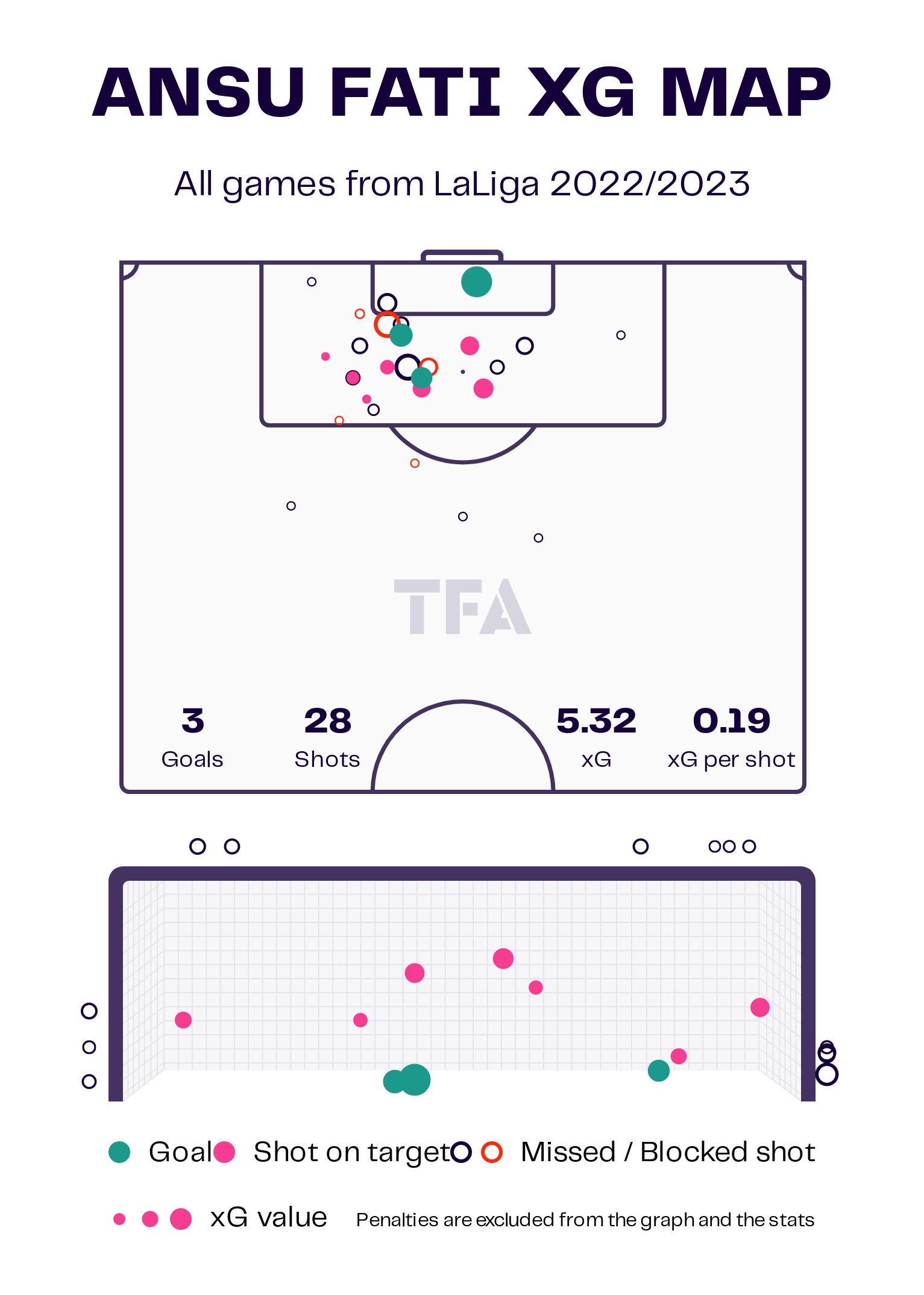 With Robert Lewandowski unavailable, Barcelona will be looking for someone else to find the back of the net. Naturally, the heads will shift in Ansu Fati’s direction. Fati, with his unique skill in scoring goals and killer instinct in front of the goal, will have a big role to play in the derby. However, he has not had many starts this season, but being fully fit now, he would be dangerous in front of the goal. 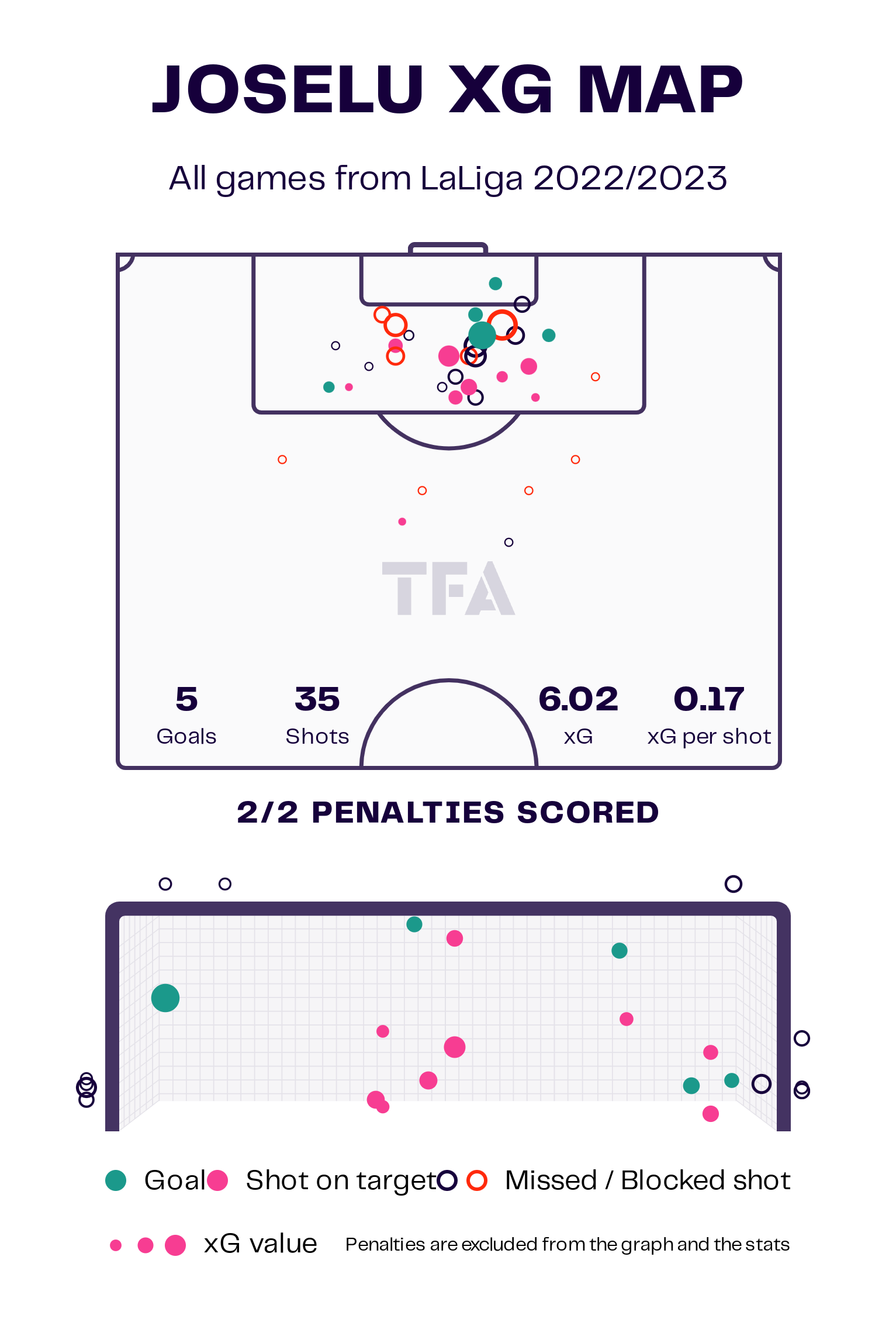 With seven goals from 14 matches, Joselu is Espanyol’s top scorer this season. The 32-year-old has tried 35 shots this season, with 15 of them on target. It won’t be easy to break down a reinforced Barcelona backline, but Joselu will have to find a way if Espanyol needs to get three points from this clash.

Barcelona will be without their main striker, Robert Lewandowski, who is suspended. Ronald Araujo, Frank Kessie, and Sergi Roberto have recovered from their injuries and increased the squad’s depth.

Espanyol will miss Keidi Bare and Adria Pedrosa, with the former picking up an injury and the latter suffering from a hernia. Martin Braithwaite might get the nod to be in the starting XI against his old team at Camp Nou.

Barcelona will be looking to continue their brilliant form in La Liga as they set out for the Catalan derby at their home ground. The absence of Robert Lewandowski could have a great impact on the match, but as Barcelona have a lot of attackers capable of finding the back of the net, they wouldn’t be worried. Espanyol, on the other hand, will be going out to ensure they do everything to decrease their chances of getting relegated. They will try to take some motivation from the derby, which is always feisty.

Transfer Analysis: What will the attack-minded full-back bring to Atleti’s backline?

Transfer Analysis: Why Barcelona were eyeing a loan move for the World Cup star

Transfer Analysis: Can the Spaniard help his former side reach the top half of the table?

Under the microscope: Why Rodrigo De Paul is such an important...