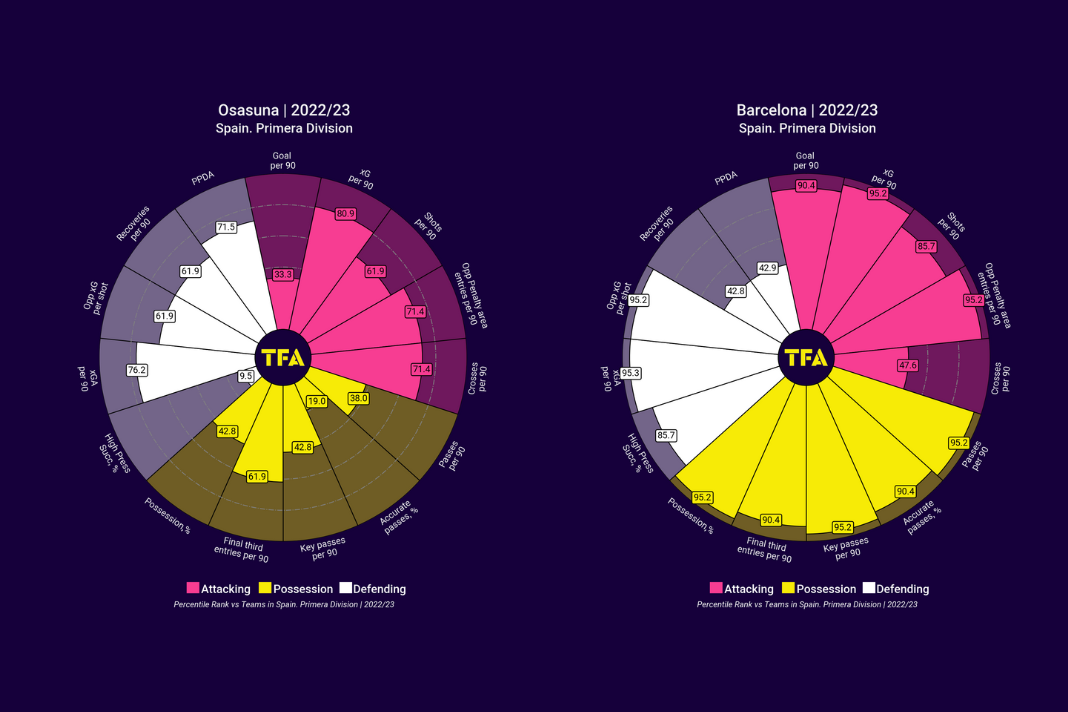 Osasuna is coming off two consecutive wins in the competition. The hosts have won seven, drawn two, and lost four matches this season. They have been unbeaten in their previous four matches, and this has pulled them up to the fifth position with 23 points. Osasuna will be confident after beating Celta Vigo and Real Valladolid in consecutive matches and will be fighting for the three points that would take them further up the table.

Barcelona, meanwhile, is coming off a 2-0 win over Almeria. They have won eleven, drawn one, and lost one match this season. They displayed a brilliant performance against Almeria and will be hoping to repeat the same on Tuesday night as well. 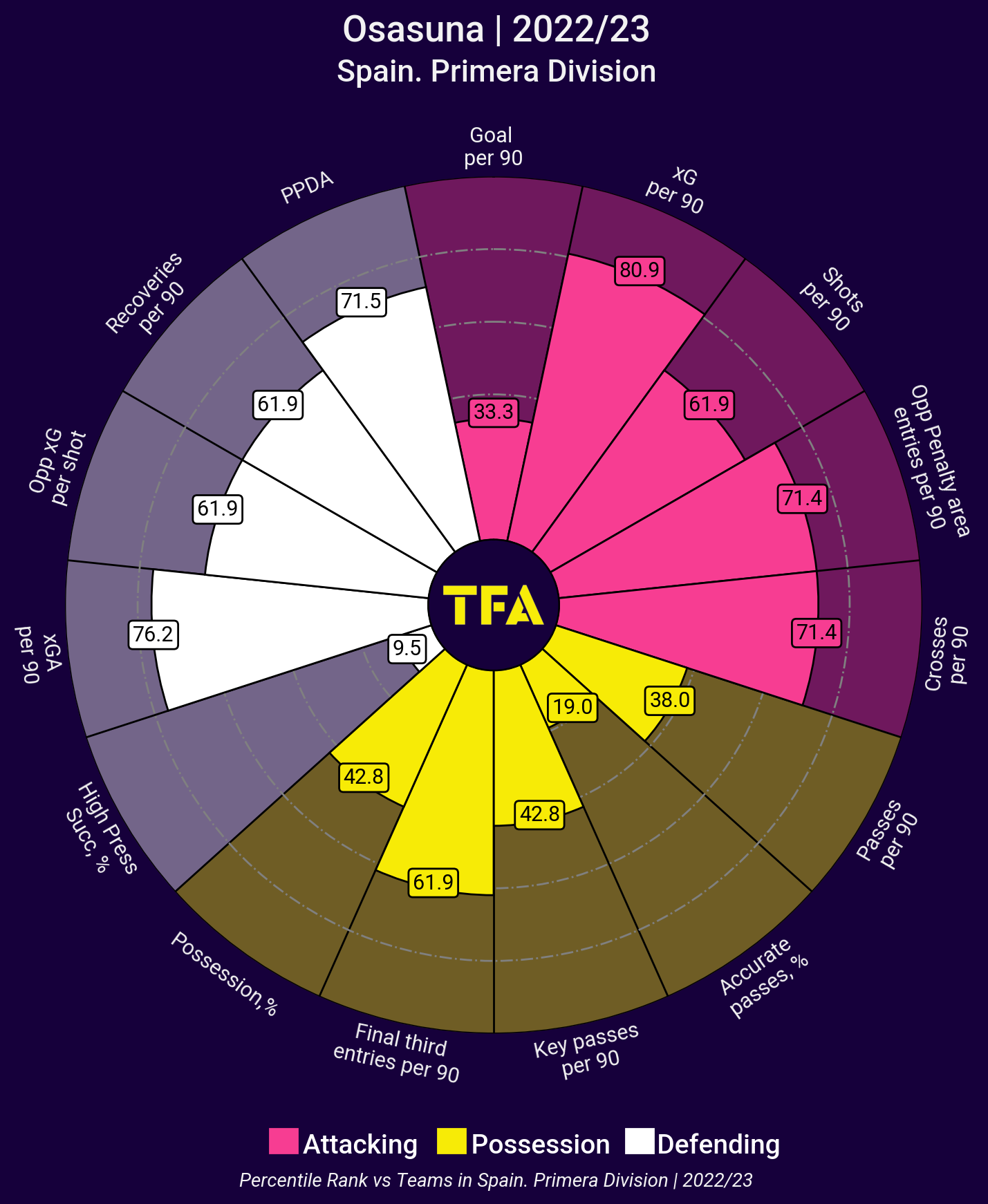 Osasuna have scored 15 goals this season and conceded 14. They score an average of 1.15 goals per game but concede 1.07 goals per game as well. The hosts will have to produce more goal difference if they have to win against Barcelona. They have an xG of 1.38 and launch 26 positional attacks per game on average. But only 26.4% of those attacks result in shots. They will need better efficiency in attacking, particularly against Barcelona, who don’t give you a lot of chances to attack. Osasuna have an average of 12.23 shots per game, but only 33.4% of them are on target.

Defensively, they haven’t been that bad, as they have only conceded 0.92 goals per game. They win 56% of the defensive duels and make 38.6 interceptions per game as well. The backline of Osasuna will have to bring their best game to deny the front line of Barcelona from scoring. 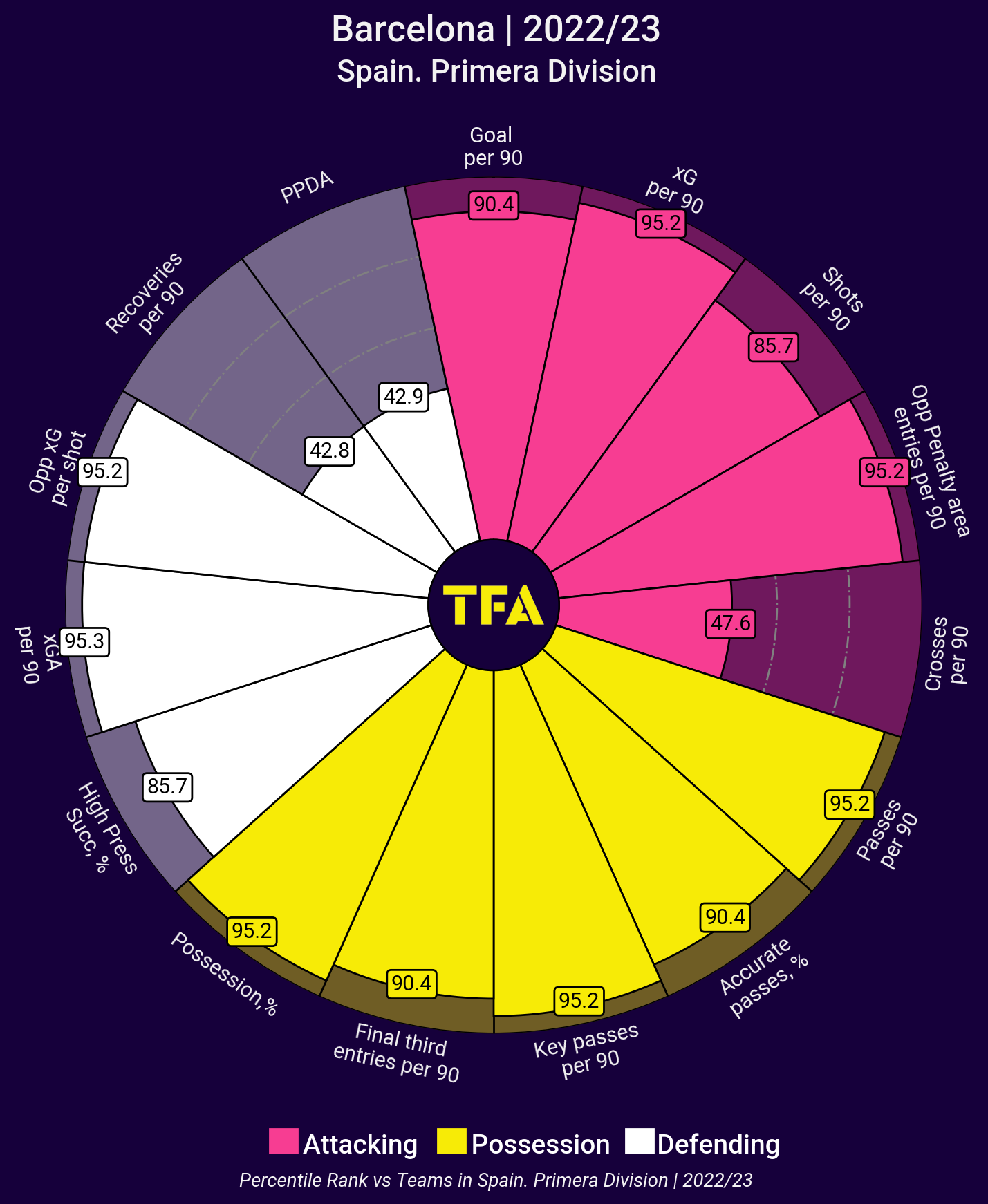 Barcelona has been in top form in La Liga this season and has often found the top gear easily. They have an incredible average of 2.38 goals per game, and most of them are created through their trademark swift passing. The visitors also launch 38.77 positional attacks per match but have often found it difficult to find the final pass. They have a passing accuracy of 89.7% and make 74.46 passes into the final third on average. The overlapping runs of Jordi Alba were the main source of attack for Barcelona against Almeria, and they will be hoping to produce a similar performance here as well.

Barcelona has had a contrasting record in their defence in La Liga as supposed to their Champions League campaign. While they conceded 15 goals in the Champions League group stages, they have only conceded four in La Liga, the least of any team. Marc-Andre Ter Stegen has recovered his best form and has 11 clean sheets to his name. He will be hoping his team will help him take that tally to 12 on Tuesday night. 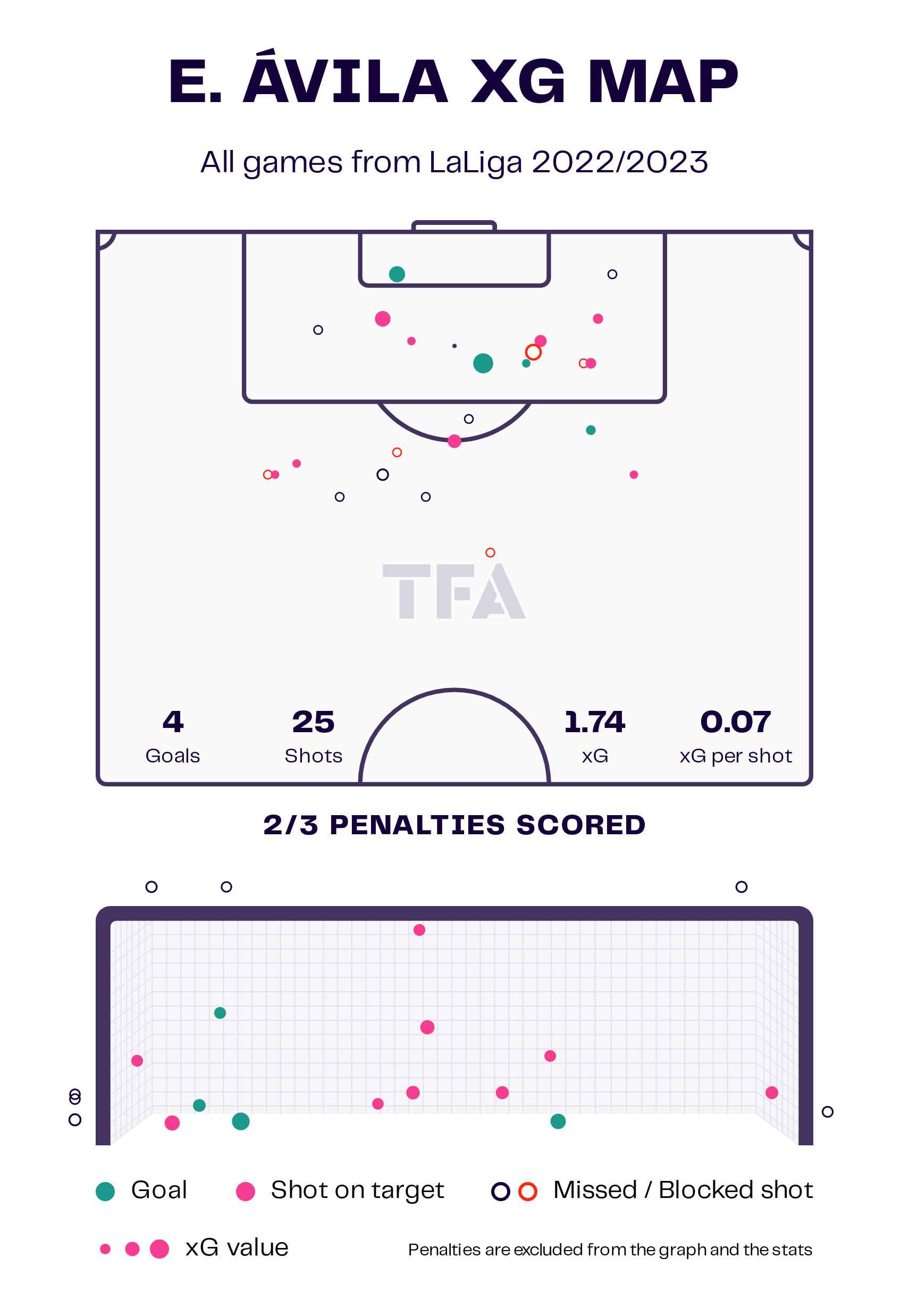 Ezequiel Ávila is Osasuna’s top scorer this season with six goals to his name. He has an average of 0.39 goals and 3.57 dribbles per game. The Argentinian International will be hoping to put up a good performance against current table-toppers Barcelona. The 28-year-old takes an average of 3.2 shots per game with 34.4% accuracy. He enjoys an average of 2.84 touches in the penalty box as well, and the team will be counting on him to pull out the big guns against the Catalan giants. 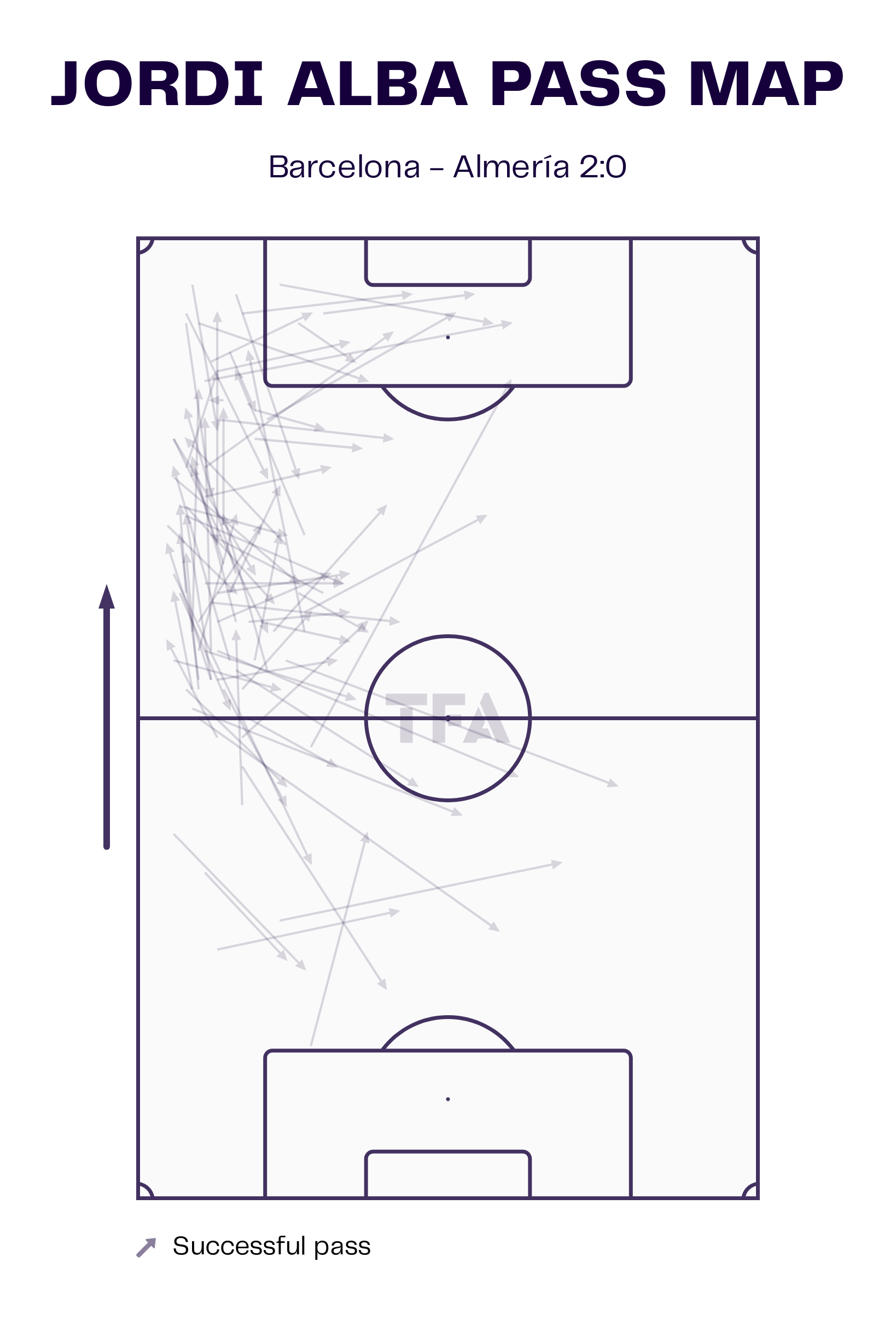 Jordi Alba was the main attacking source for Barcelona in their 2-0 win against Almeria. His overlapping runs and pinpoint crosses make him a dangerous player to defend against. The Spanish international was left on the bench for the majority of this season but has managed to win the manager’s trust back with his brilliant performances. He makes 8.11 passes to the final third and has an accuracy of 81.2%. His combination with Ferran Torres on the left flank was crucial for Barca’s win against Almeria. He was also the provider of their second goal in the last match. Xavi Hernandez will be hoping that Alba can create the same danger in the away match against Osasuna as well.

Osasuna will miss the services of on-loan Barcelona attackers Abde Ezzalzouli and Kike Saverio due to injury. Sergio Herrera is also uncertain about this clash.

As for Barcelona, they will not have Gerard Pique anymore in the centre of the defence as he retired in the last game against Almeria. Memphis Depay, Frank Kessie, and Jules Kounde are also unlikely to play against Osasuna. The visitors will, however, be happy with the return of Andreas Christensen and Eric Garcia.

Barcelona will go into their final match before the World Cup with the hope of securing three points against Osasuna. If they manage to make the right decisions in the final third, this shouldn’t be a tough matchup. The hosts on the other side will be confident in ruining Barcelona’s plans, as they will try to have a hattrick of wins in the competition.

Barcelona have a need for another number 9 and Inter man...