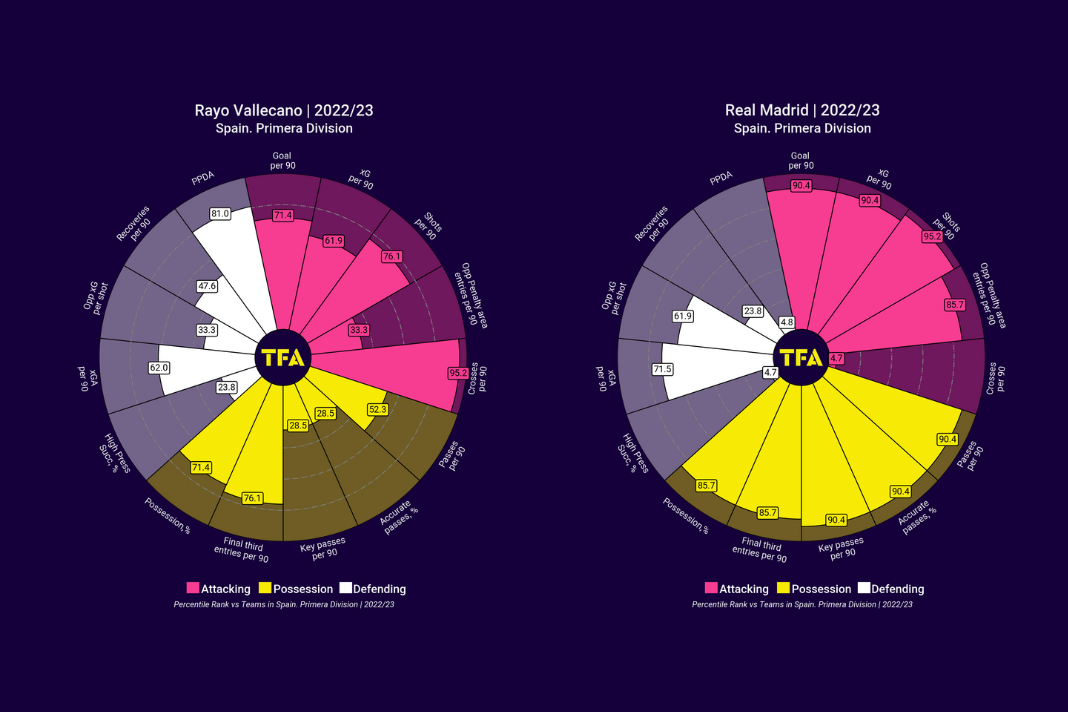 Rayo Vallecano will take on Real Madrid at the Estadio de Vallecas on Monday night in La Liga. The home team is in ninth place with 18 points from 12 matches and will be looking to cause an upset for the defending champions. The Los Blancos, on the other hand, are in second place with 32 points from 12 matches. A win here would take them to the top of the table.

Rayo Vallecano steps into this game having lost their previous match against Sevilla and will be hoping to win some points against the defending Champions. However, it won’t be an easy task as Real Madrid looks in the form of their lives. The hosts will try to find some motivation from Real Madrid’s loss against Girona last week and will be hoping to put up a similar performance to hold off the Champions.

Real Madrid comes into the game on the back of an incredible 5-1 win over Celtic in the Champions League. Los Blancos seem to be on another level at the moment as they are unbeaten in La Liga. They will be looking to go ahead of arch-rivals Barcelona in the points table when they step out to face Rayo on Monday night. 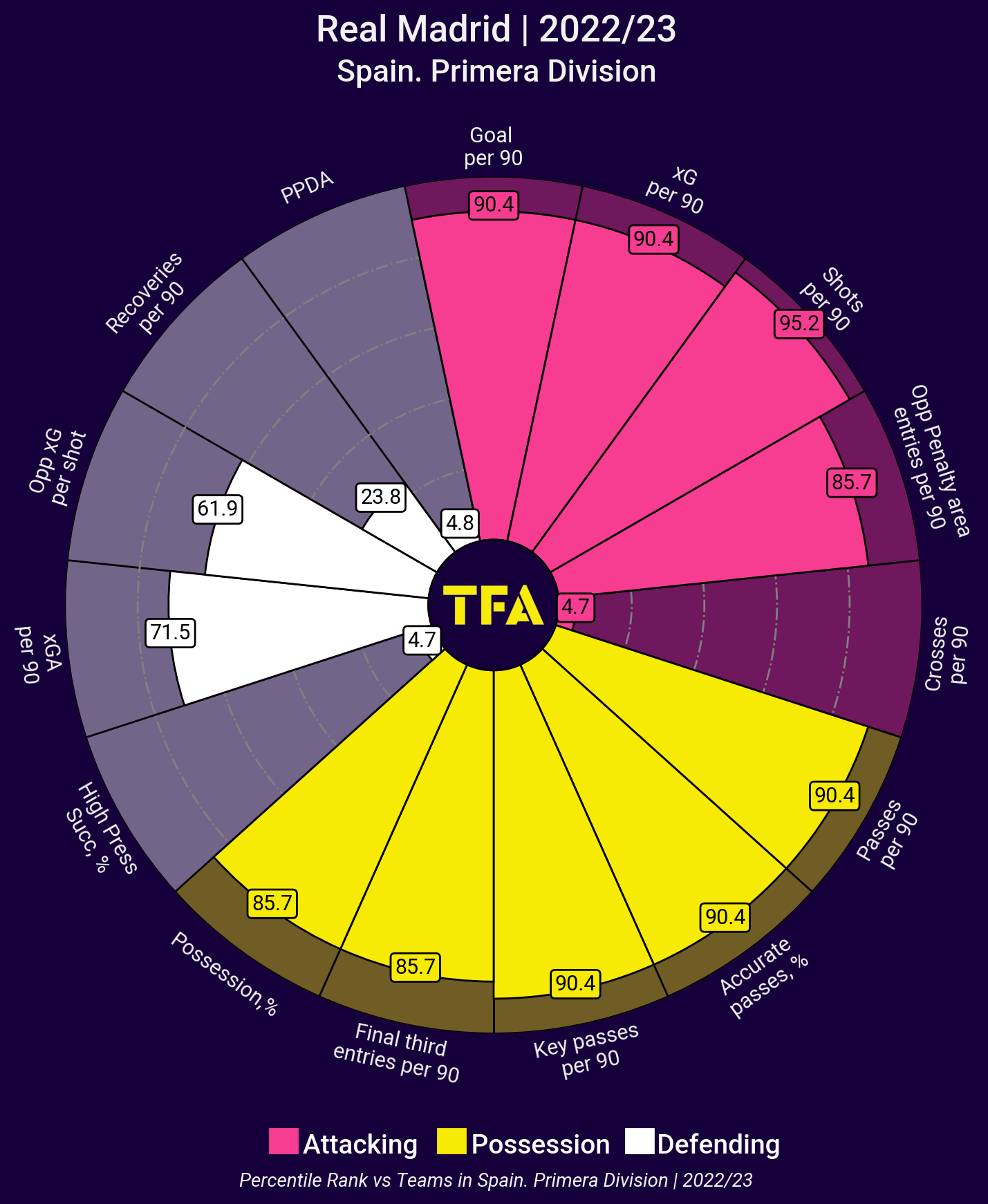 Real Madrid currently has one of the best squads in world football and is asserting its dominance in every competition it participates in. They are the current La Liga champions and the current UEFA Champions League winners. One of the reasons for that is their ability to launch effective counterattacks. With fast forwards and creative, clever midfielders, the Los Blancos can launch a quick counterattack at any time. On average, they launch around 2.94 counterattacks per game, with 38.4% of them leading to shots.

But counterattacking is not their only threat. While they are happy to sit back and counter against teams who enjoy possession, they averaged 56.33% of possession this year. They create, on average, 35 positional attacks per game with 48.57% accuracy. The Los Angeles Blancos also average 15.65 shots per game with 39.4% success. They score an average of 2.13 goals per game and have an average xG of 2.01.

Real Madrid has a solid backline as well. They have only conceded ten goals this season and 0.86 goals per game on average. The defending champions make an average of 57.87 defensive duels per game and make 40.78 interceptions as well. 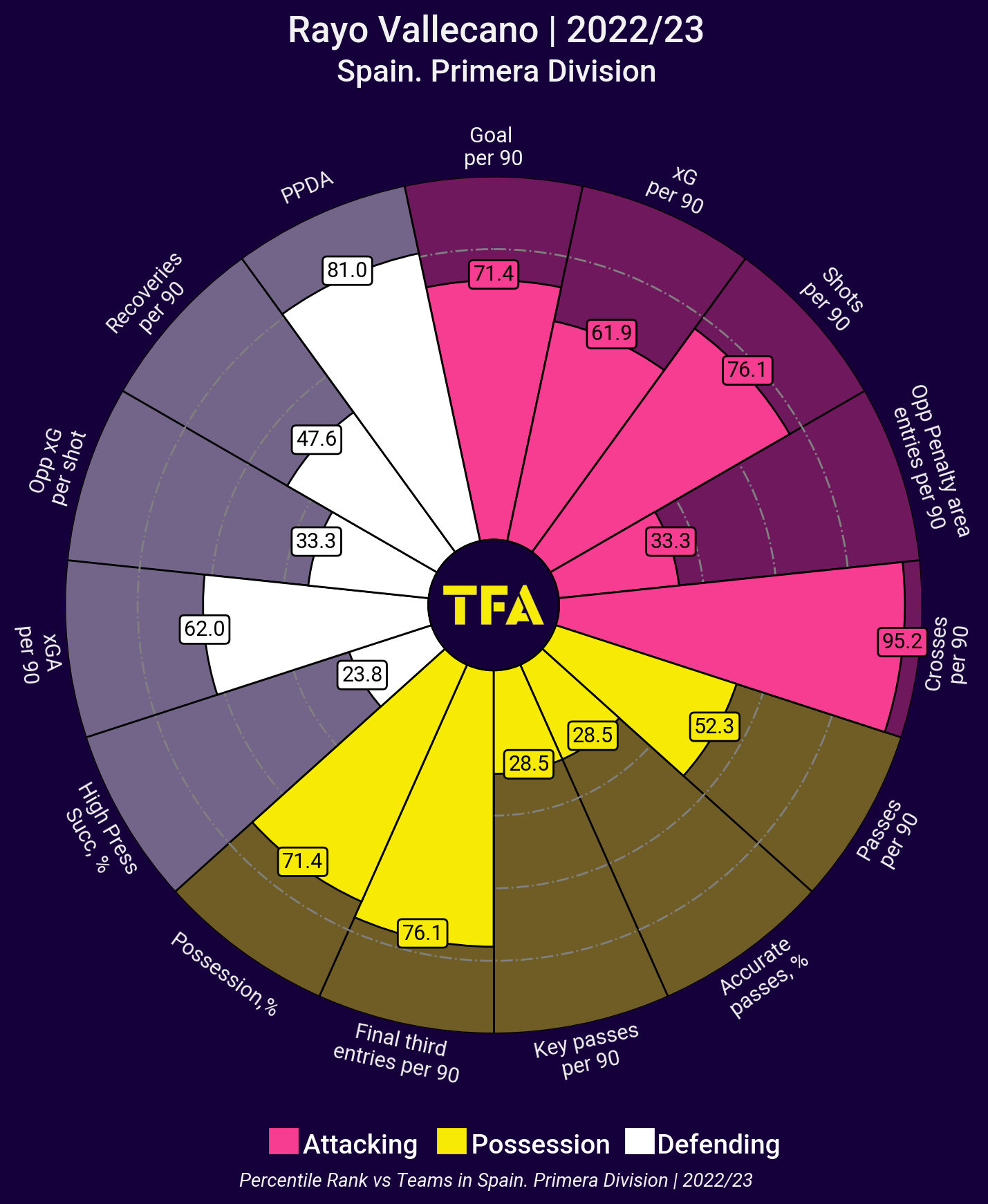 Rayo Vallecano, on the other hand, has not had the best season. The hosts are in the ninth position, and Real Madrid is not the opposition you want if you want three points from a match. However, Rayo Vallecano is more than capable of upsetting any big name on his day. They score an average of 1.38 goals per game and average 12.39 shots per game. They are a team that likes to have the ball and averages 52.65% possession. Rayo Vallecano has an average xG of 1.38 and launches 31.94 positional attacks per game on average.

But the hosts have had their fair share of trouble in the defensive third. They concede 1.32 goals per game, on average, and have conceded 14 goals this season so far. They average 73.26 defensive duels per game with 59.1% accuracy. If they need to gain any points from this tie, they will have to make sure their defensive line stays sharp. 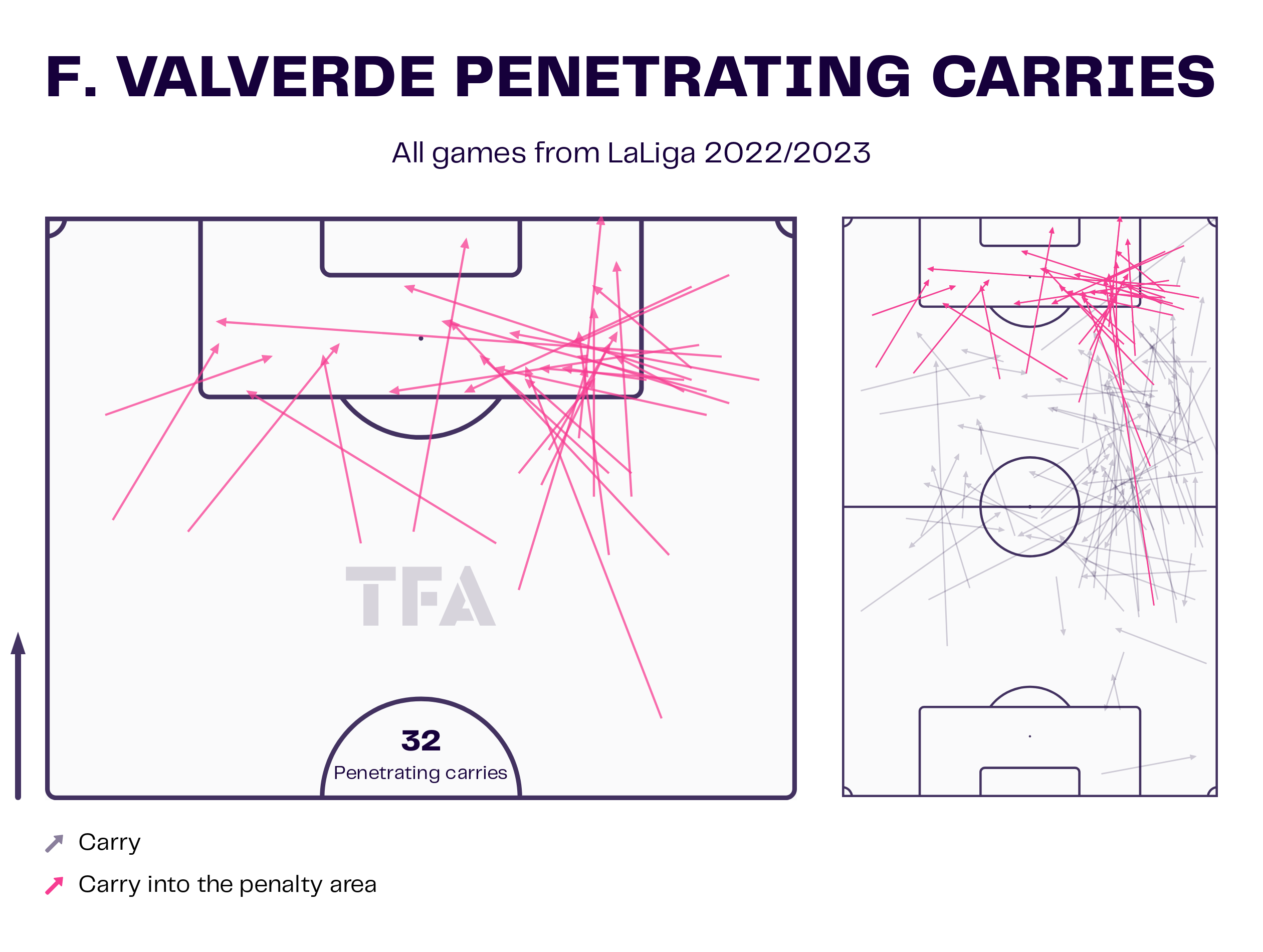 If there’s one player who has been at the peak of his form this year for Real Madrid, it’s Federico Valverde. He has developed this ability to run with the ball and produce magical goals out of nowhere. He has made 38 penetrating carries so far this season and has six goals and two assists to his name in the competition. He averages 0.39 goals per game and 0.19 assists per game. The Uruguayan International makes 2.3 dribbles per game and 3.16 progressive runs per game. He has stepped up in crucial games, scored for the champions on so many occasions, and has been a revelation this season. Real Madrid will be counting on him to produce another stellar display. 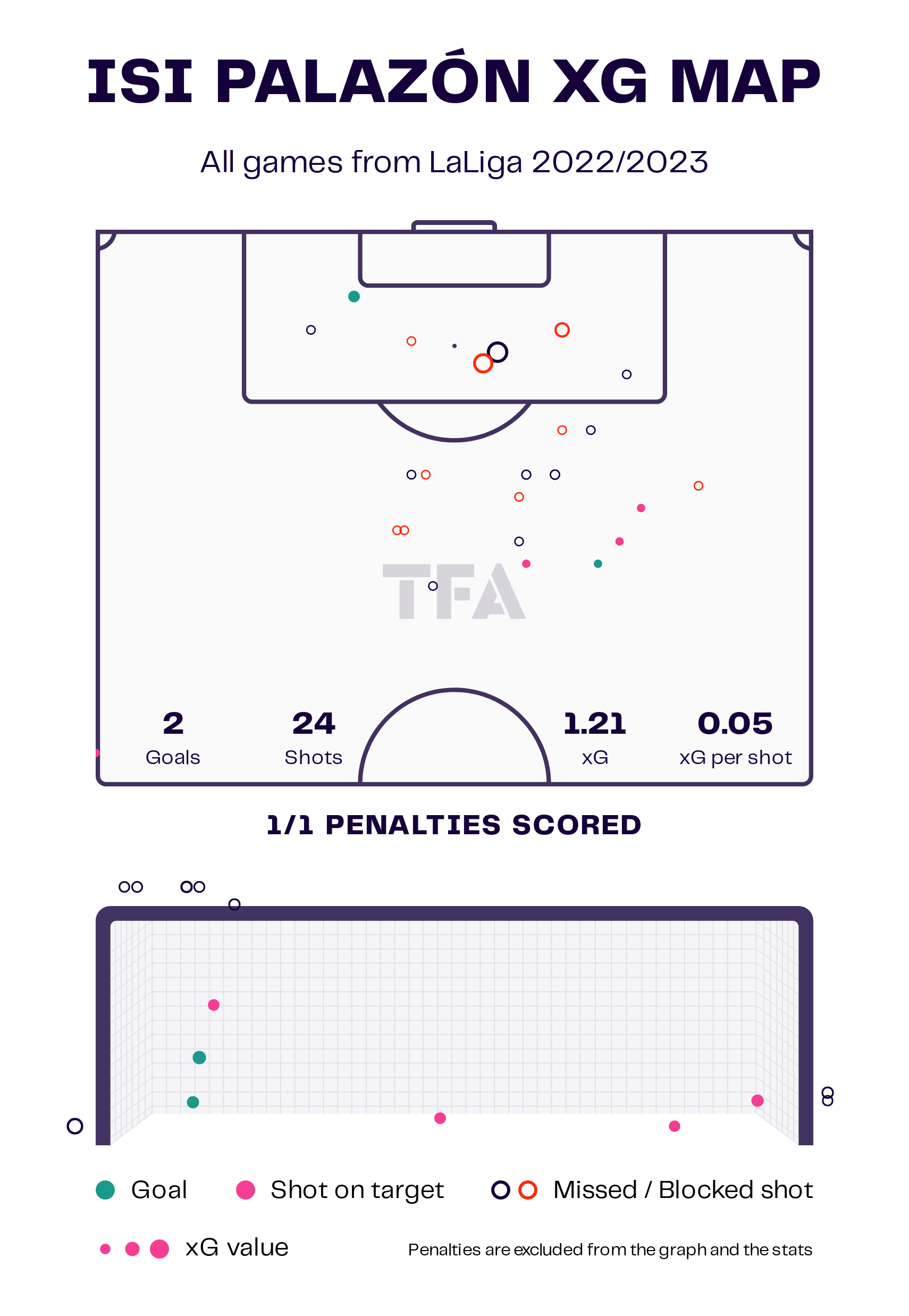 Isi Palazon is Rayo Vallecano’s top scorer this season with three goals and two assists to his name. The Spanish International player averages 0.18 goals per game and 0.12 assists per game. He also makes 2.16 shots on target on average. The 27-year-old has 5.66 dribbles per game and is more than capable of upsetting Real Madrid. He takes 1.73 touches in the penalty box and converts 35% of his shots into goals. The hosts will be urging him to put up a good performance as they face the giants.

Rayo Vallecano will go into this match without Andres Martin and Jose Angel Pozo. But they have good news as Randy Nteka and Oscar Trejo return from suspension.

Real Madrid will be without Ballon d’Or winner Karim Benzema due to a muscular problem. Antonio Rudiger is also likely to miss out on this clash due to an injury, while suspension keeps Tony Kroos out as well.

Real Madrid will go into this match confident of winning three points from it, and it would not be a surprise if they did as they are the clear favourites. The hosts will be hoping to inflict the visitors’ first defeat of the season and take three points in the title race. Even though football is a game of glorious uncertainties, Real Madrid goes into this match as favourites.

Under the microscope: How Jules Kounde has had a huge impact...

Decision time: Can Zidane afford to move this squad player on...

How statistics can help gamblers to bet on La Liga

Under the microscope: Why it has not been a sweet homecoming...