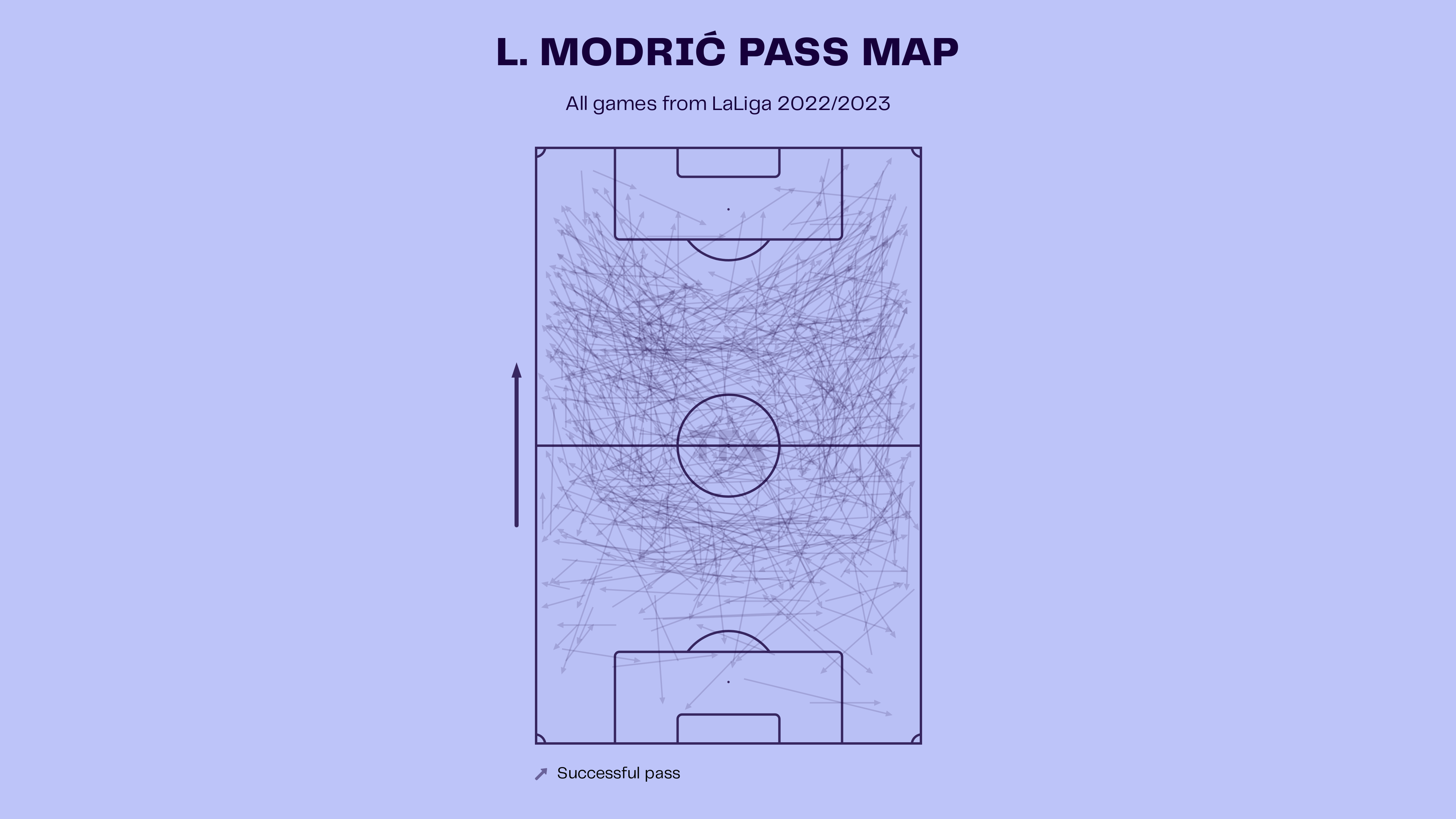 Real Madrid is blessed with two of the best-experienced midfielders in the form of Luka Modric and Toni Kroos. The former is 37 years old but he is still one of the most influential players for the Los Blancos. The Croatian wizard has been playing for Real Madrid for over a decade and recently became the first player to feature in a World Cup and Euros in three different decades. Even at 37, Modric is showing no signs of slowing down and is bossing the midfield with his clever footballing brain. His passing, especially the cross off the outside of the boot is very famous. We look at some stats to understand how Modric defies his age and keeps up with Europe’s best. 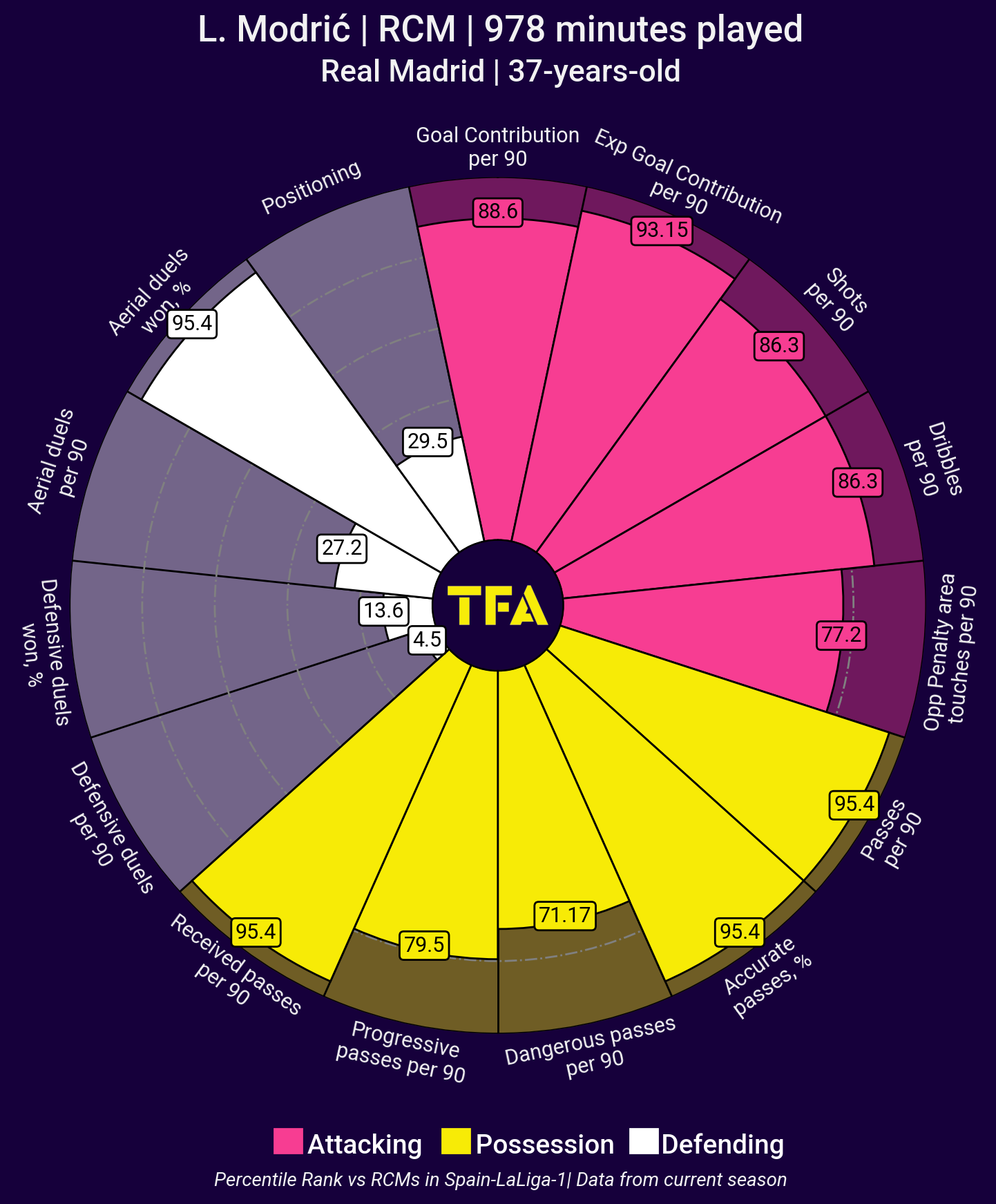 Luka Modric has played 13 matches, starting 11 and coming off the bench in two matches. He has three goals and two assists to his name in La Liga and two goals in the Champions League. He is the glue that holds the Real Madrid team together and his performance for Croatia in the World Cup has also been impressive. He is ranked in the top 95.4 percentile for accurate passes and passes received per game. Modric is highly ranked in attack as well. He can dribble, he can find the perfect final pass and when required take shots too. He is ranked in the top 86.3 percentile for shots per game and has three goals this season. 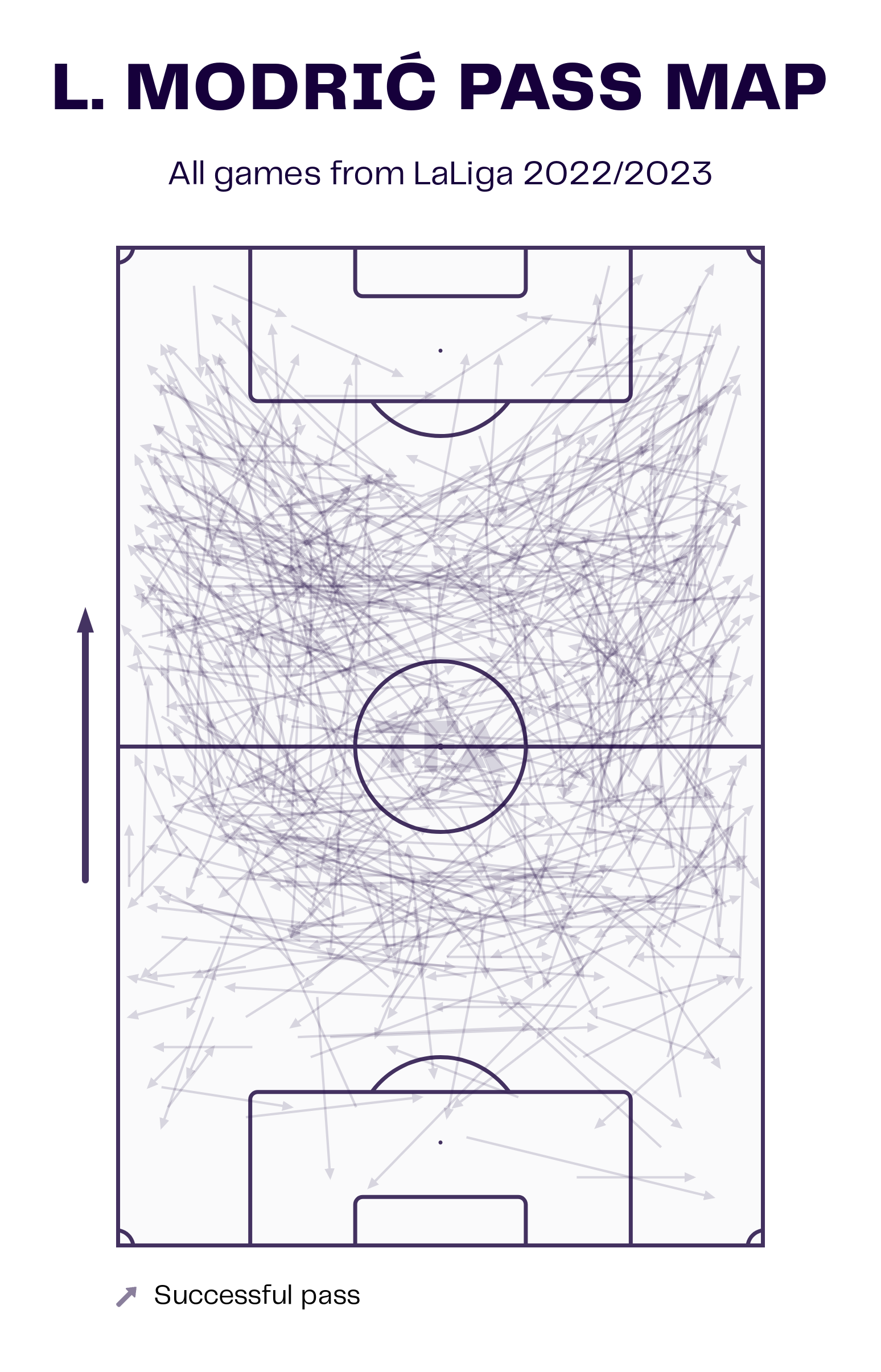 Luka Modric is a master in passing and produces a masterclass every time he steps out onto the field. He has a passing accuracy of 89.7% and weaves a network of passes together in the midfield. One of his great strengths is his ability to slow down the game and quickly transition according to the situation. Playing as a central midfielder, Modric sometimes gets into very attacking positions. He plays an average of 11.29 passes into the final third and 84.3% of those passes successfully reach the target. The 37-year-old has incredible vision and sometimes finds passes naked to the normal eye. His presence in the midfield along with Toni Kroos creates a metronome for passing in the midfield. 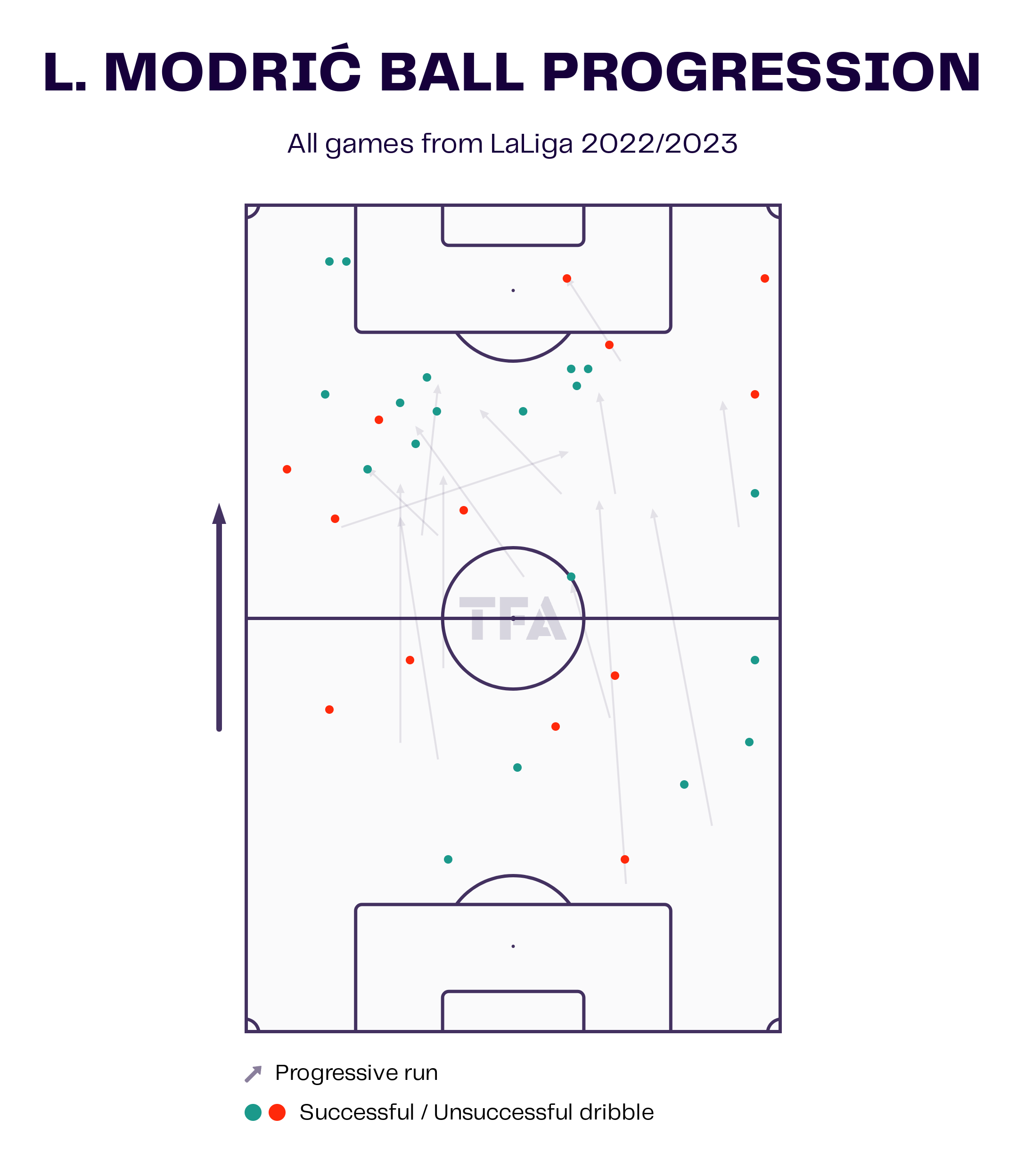 Another fairly dominating trait of Luka Modric is his ball-carrying ability. He can carry the ball from a deep position up to the final third. His composure on the ball and technical skills are a delight to the eye and makes even the opponents stand in awe. He makes an average of 3.54 dribbles per game with 60.4% success. He is not a dashing dribbler like Lionel Messi. But he can go past players using his technical ability and find the right pass. Modric also takes part in an average of 7.79 dribbles per game winning 48.6% of them. 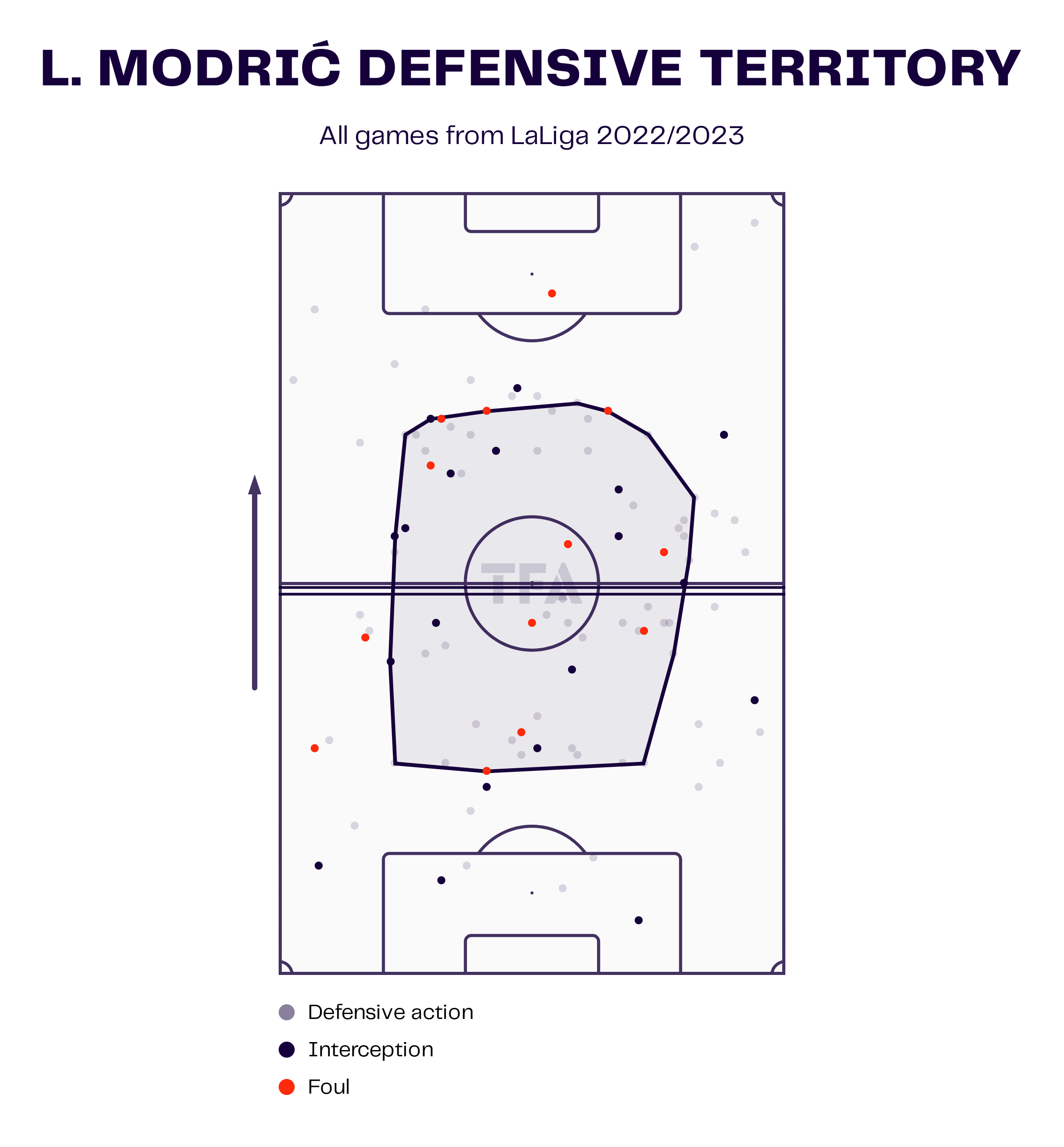 Apart from his offensive contributions, Modric also does his duty defensively. He usually plays either as a left or right-centre midfielder. Modric holds the team together and decides the tempo of the team. He is a box-to-box midfielder and contributes towards both attack and defence. He attempts an average of 4.92 defensive duels per game with a success rate of 56.2%. The Croatian International also recovers the ball around six times per 90 minutes. He stays in the centre of the pitch usually but makes sure that the opposition players don’t make the most of the width either. 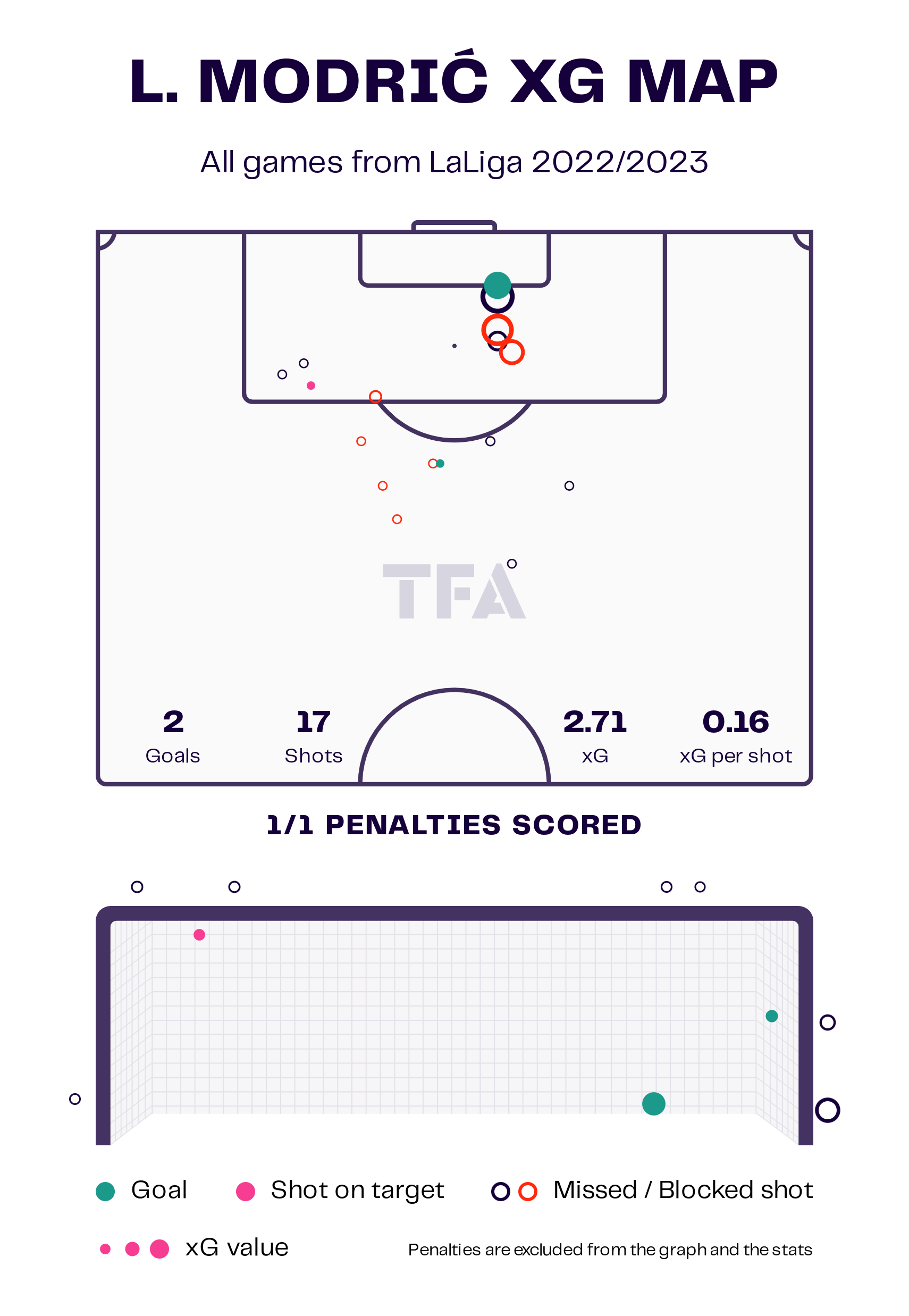 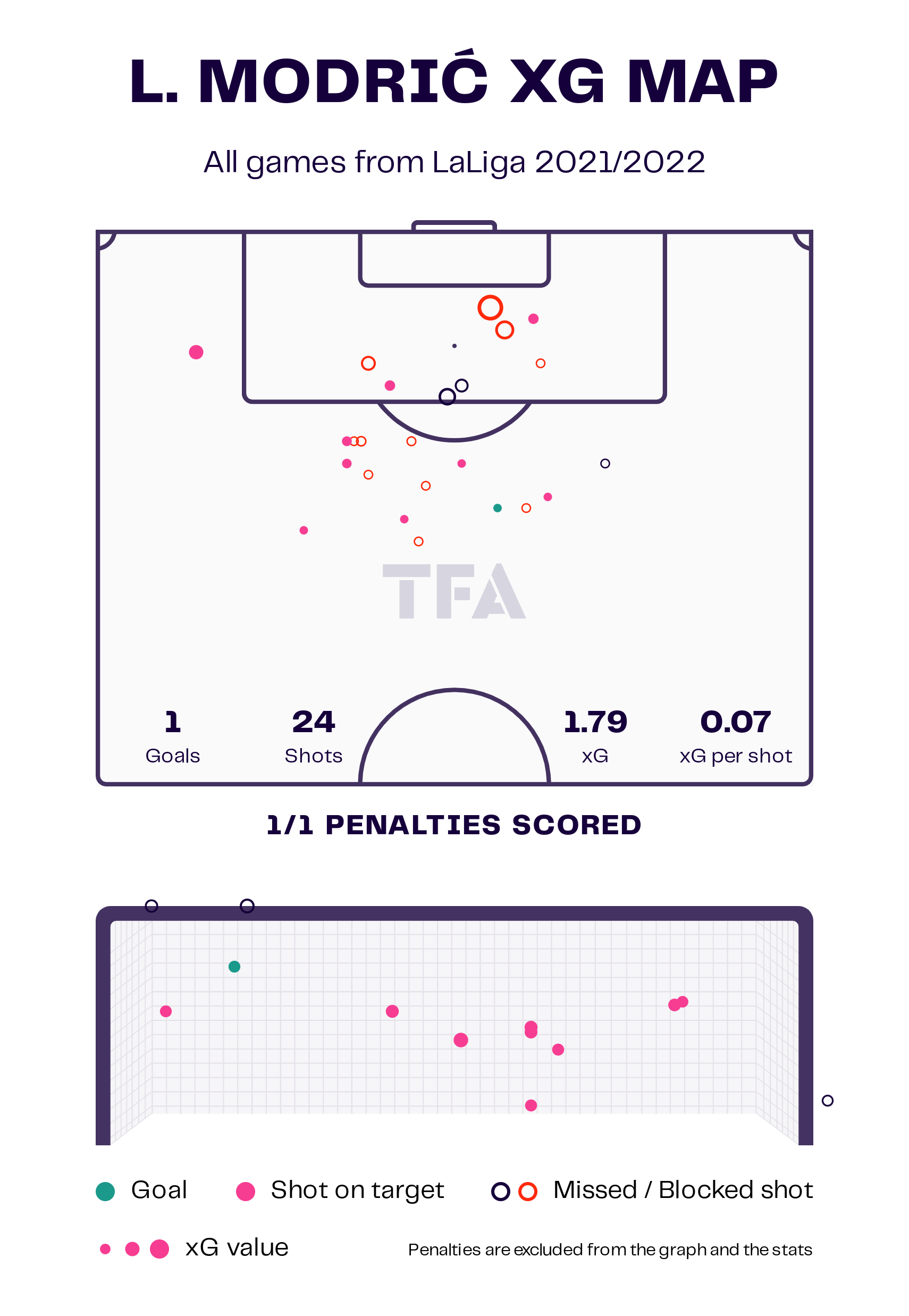 Compared to last season, Modric already has scored more goals this season. He had scored two goals last season, of which one was a spot kick. The first visual shows the xG map of Modric from this season, and the second viz shows the xG map of Modric from last season. Modric has already scored three in La Liga and two in the Champions League. He comes up with goals when needed and has scored some wonder goals as well. His goal-scoring form has increased from last season and is ageing like fine wine. 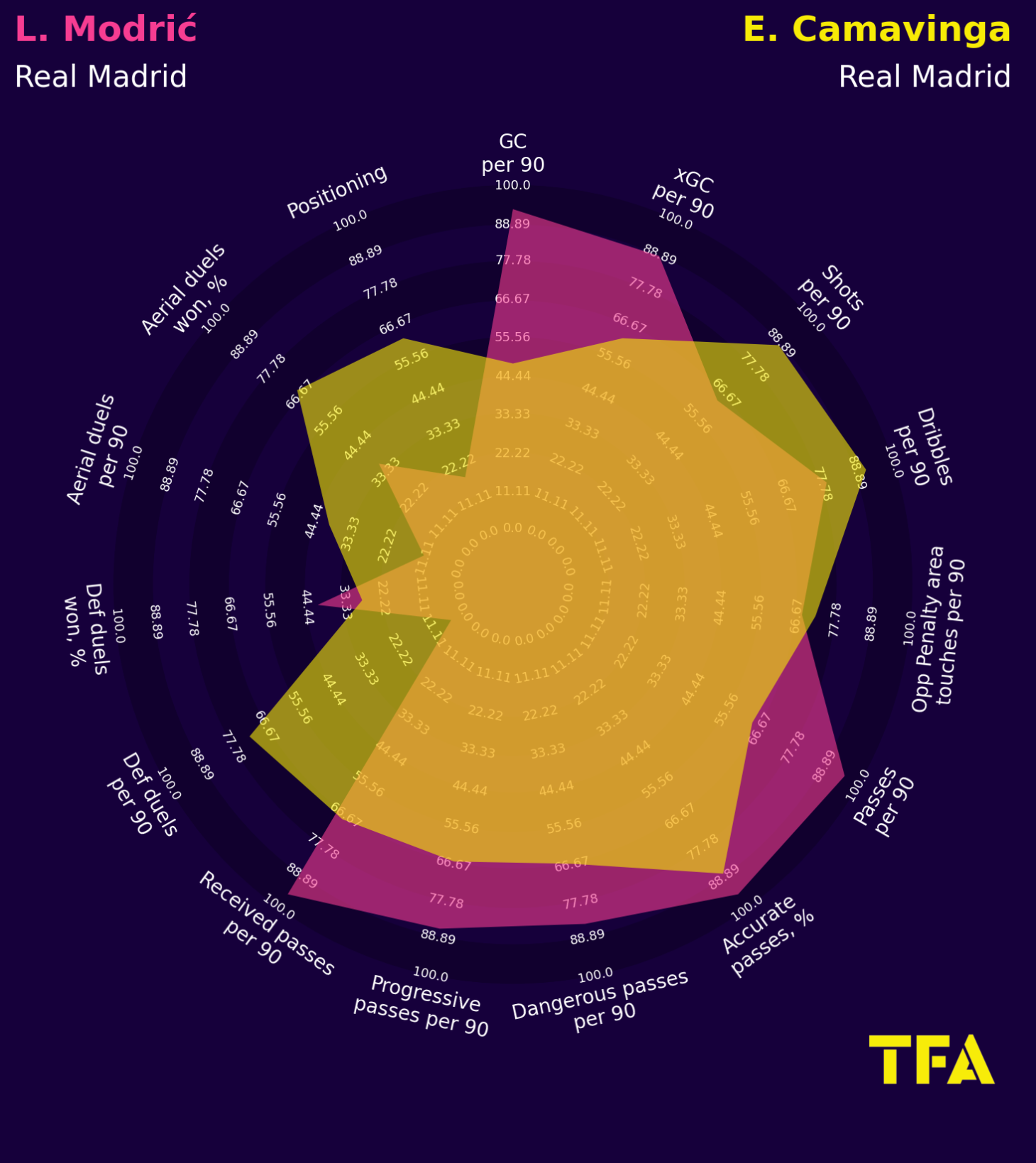 Eduardo Camavinga is a player whose time has come considerably down after Real Madrid signed Aurelien Tchouameni. But the 37-year-old Luka Modric is still preferred over the young French star. There is a reason why Modric has started most of the matches this season ahead of Camavinga. Apart from the obvious difference in experience, Modric contributes much more to the attack than Camavinga. He is capable of finding the right pass, or shooting or holding the ball when needed. Luka Modric has better stats in dangerous passes, accurate passes and goal contributions.

Luka Modric has been an integral part of Real Madrid for a long time and is still going full-guns blazing. Even at this age, Modric has not slowed down and is leading Real Madrid from the front. While the kilometres left in his tank are unclear, there is little to no doubt that Modric, even to this day is one of the best midfielders to have played this game.

The Data Zone: Osasuna and Espanyol in goalless draw

Stats Pack: A draw between Brazil and Ecuador in Copa America...