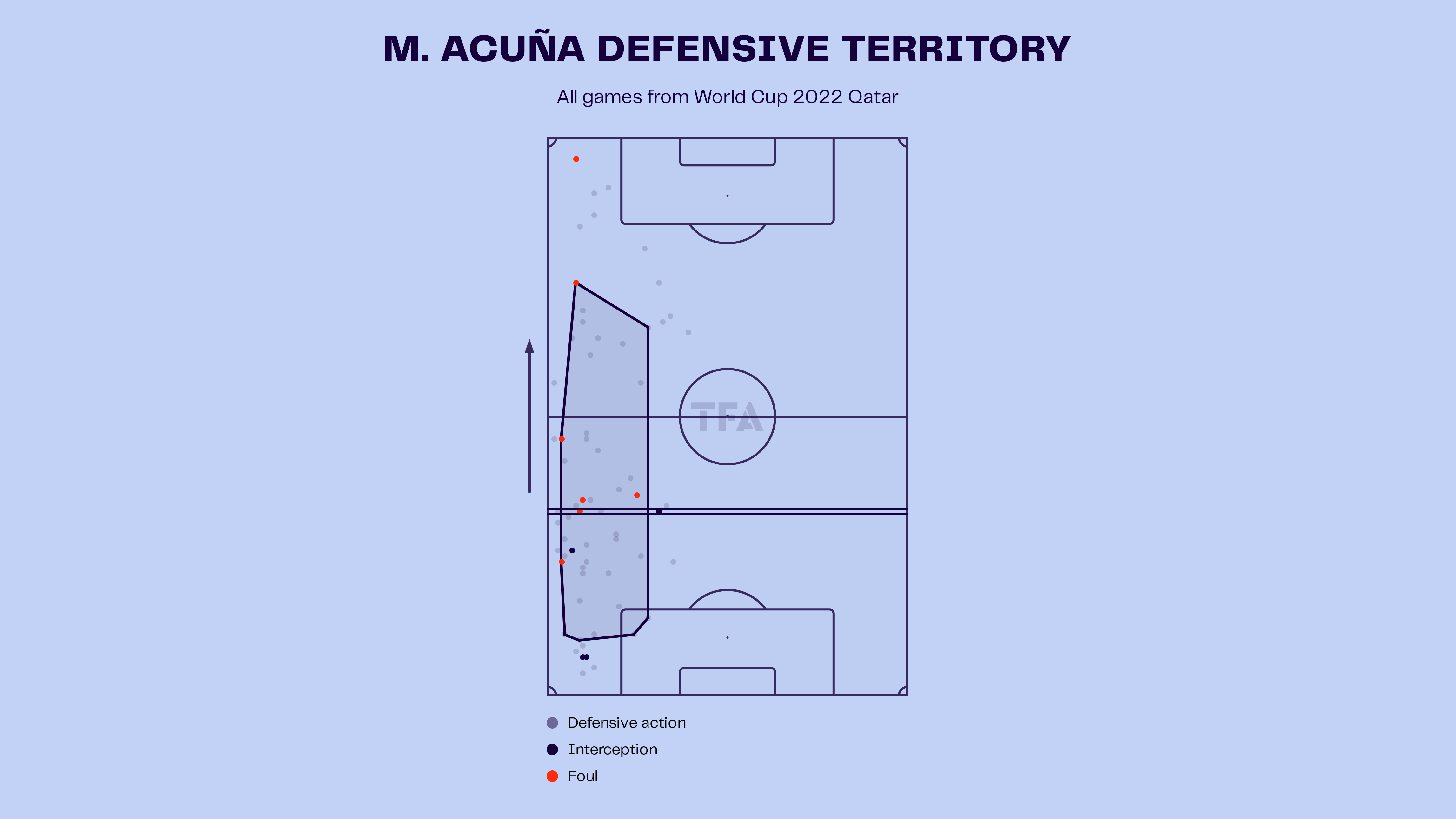 In a World Cup where the big names have stood up and performed, some names usually go under the radar. Marcos Acuna of Argentina is one such name. With the limelight shining so brightly on Lionel Messi, who has taken on a new avatar that we have rarely witnessed, his teammates have thrived in the tournament. Acuna, who plays as a left wingback for Sevilla in La Liga, has been a vital cog in the Argentinian lineup. His contributions to attack and defence have helped Argentina in their campaign. Acuna’s ability to overlap, provide the crosses, and track back when required has relieved Lionel Scaloni of some tension on the left flank. We look at his stats from the World Cup to see how his performance has been crucial for Argentina. 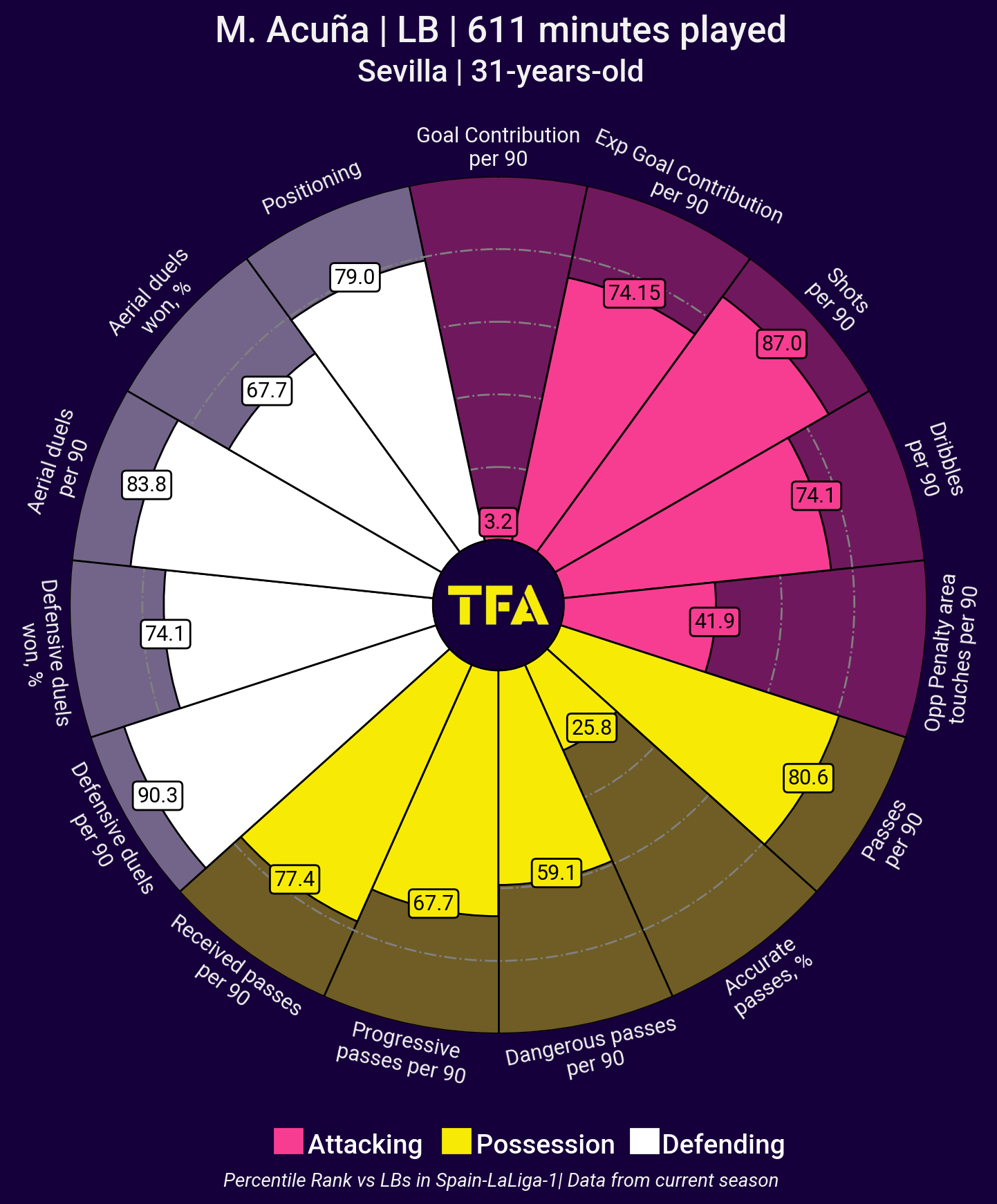 The above visual shows Marcos Acuna’s percentile rank compared to other left-backs in La Liga. We can see from the pizza chart that he has good stats in all departments. He has a high percentile rank for shots, passes, and defensive duels per 90 minutes. He is also ranked above average for dangerous passes per 90 and dribbles as well. Another area where he does well is in aerial duels. 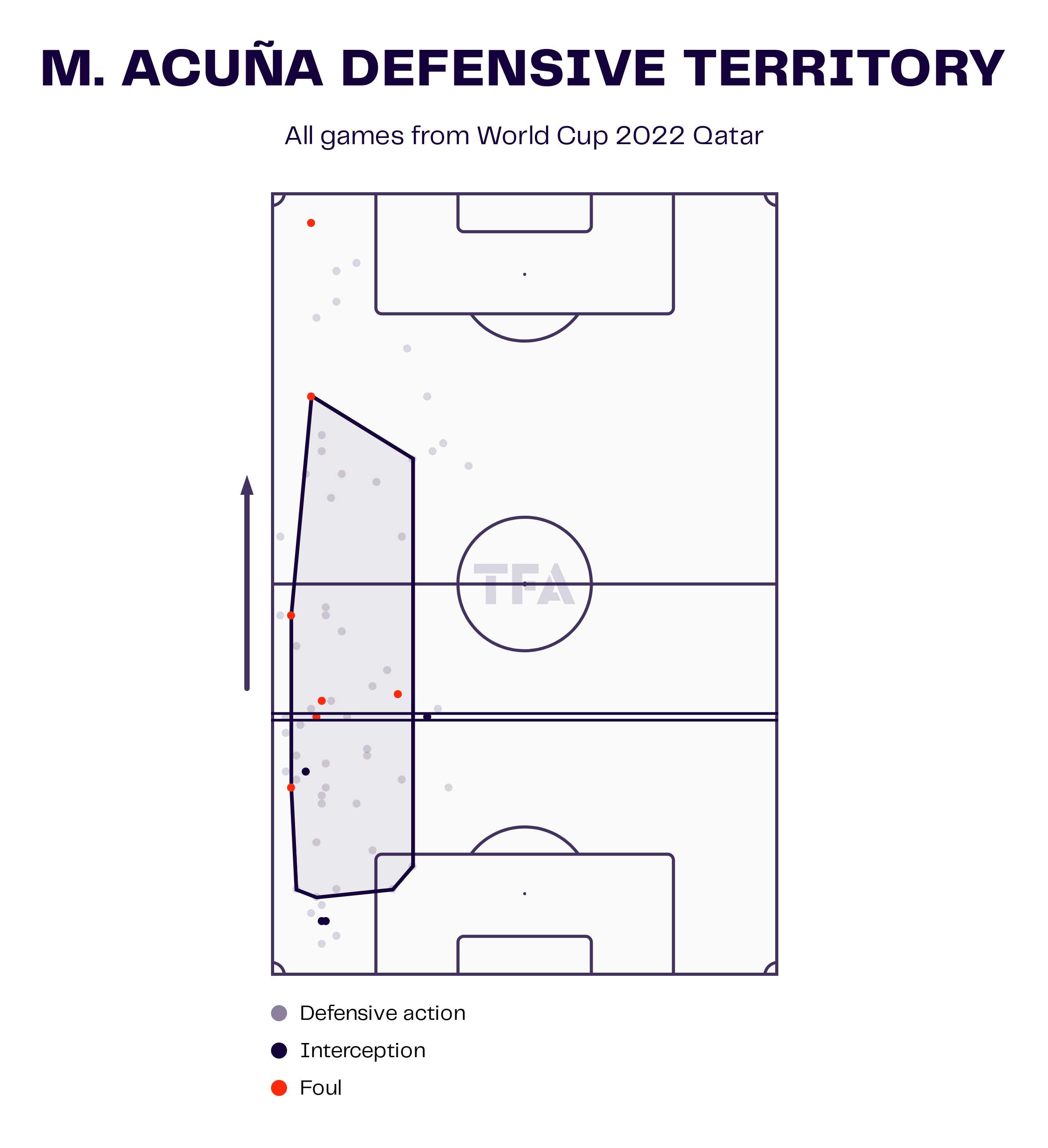 As a left-back, Acuna’s primary role is to defend, and it is fair to say that he does it well. He has not let many forwards go past him in this World Cup and has made interceptions and tackles at some crucial points. As the above visual suggests, he guards the left flank well and has made an average of six defensive duels per game in this World Cup. Acuna has contested 30 defensive duels and won 19 of them, with a success rate of 63.33%. The left-back has also made an average of 3.4 interceptions per game. 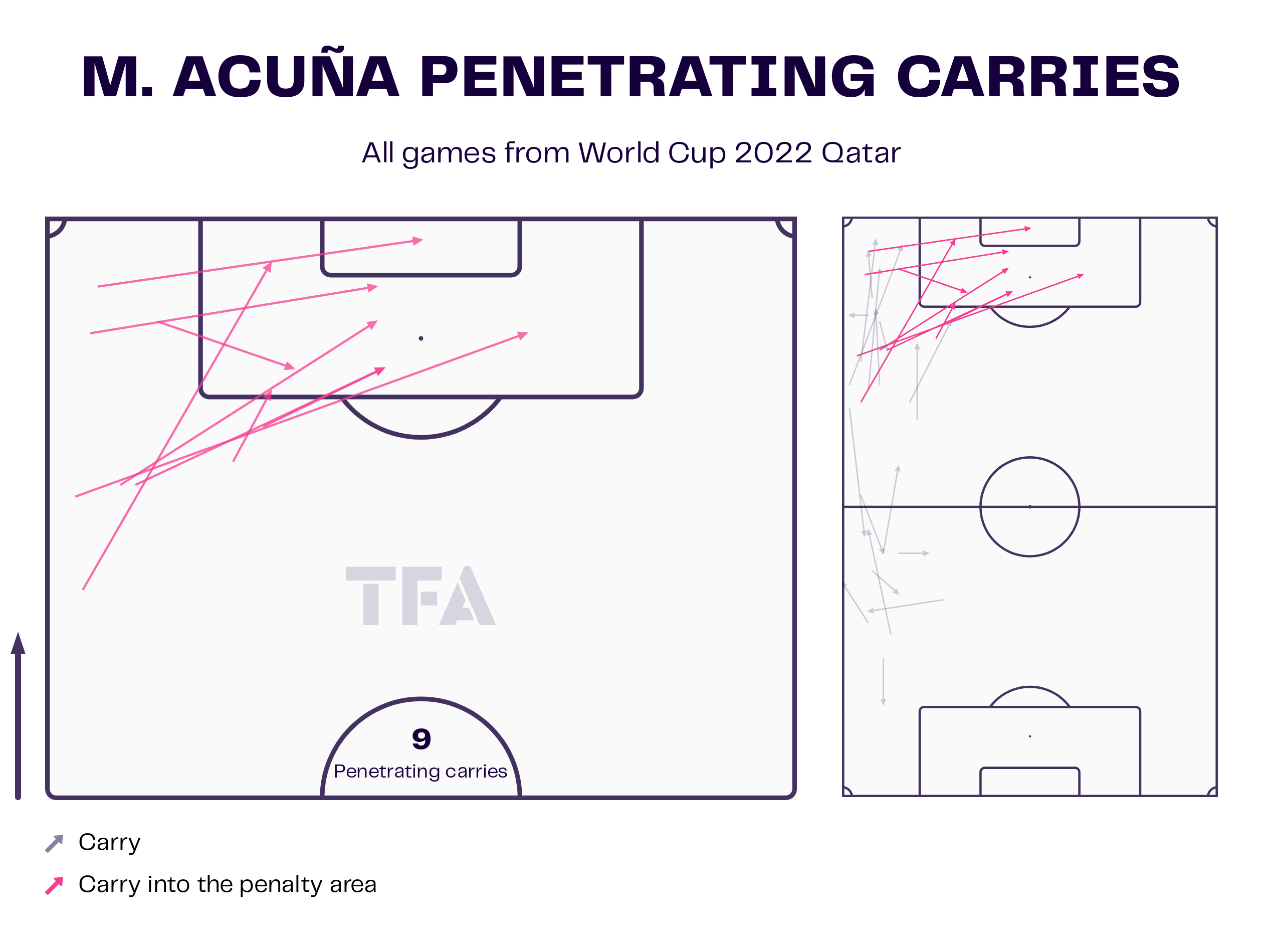 Acuna’s display on the left flank has been crucial for Argentina. He picks up the ball in the midfield or the defensive half and is capable of carrying it forward. These runs help Argentina to quickly launch a counter-attack. With Julian Alvarez playing on the inside, Acuna gets more space on the left flank and uses it to good effect. He has attempted a total of 12 dribbles, completing seven with a 58.33% success rate. Apart from these dribbles, he also makes an average of 1.59 progressive runs per game. These runs are spotted by Lionel Messi who plays his trademark long ball to find Acuna in a lot of space. 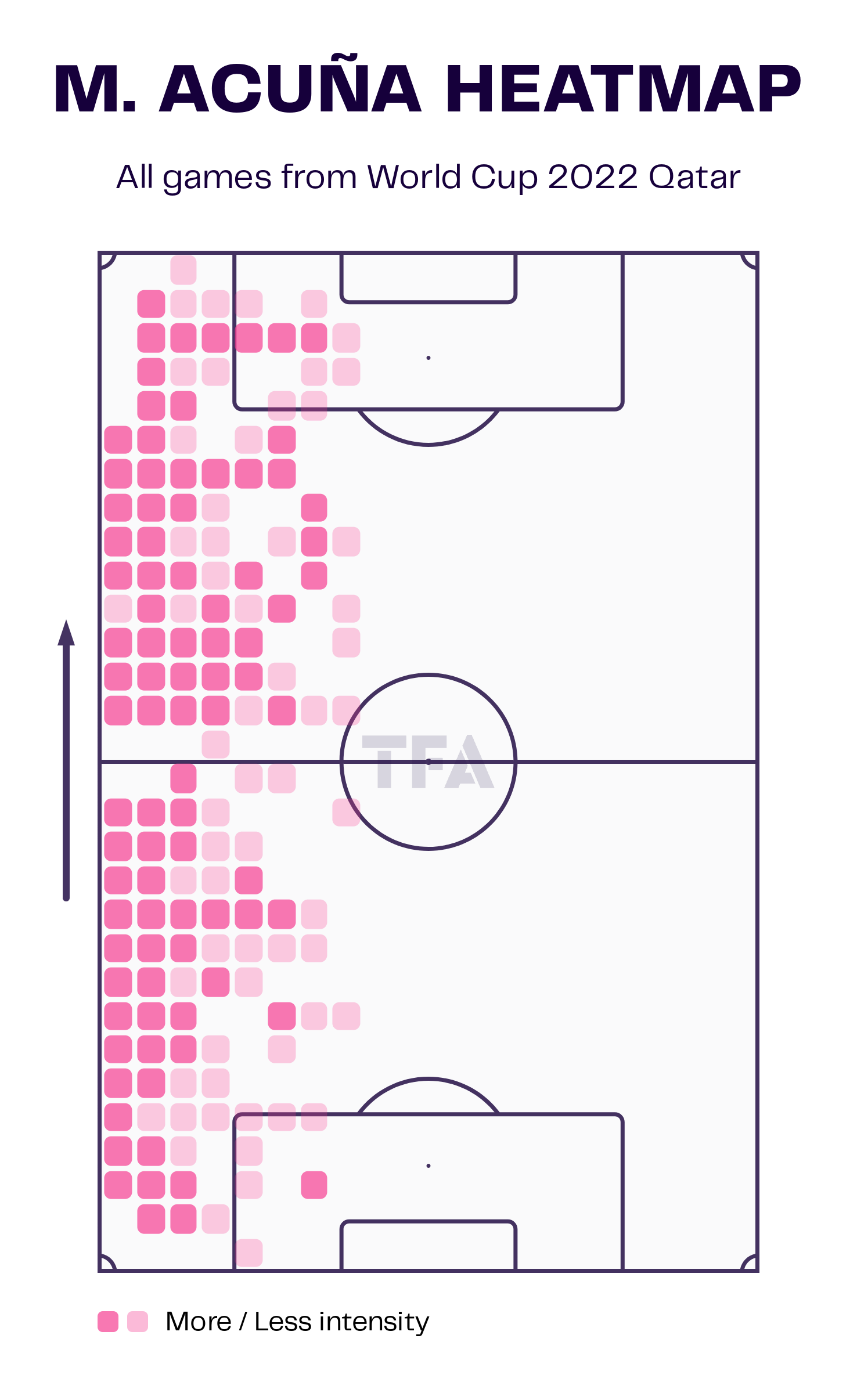 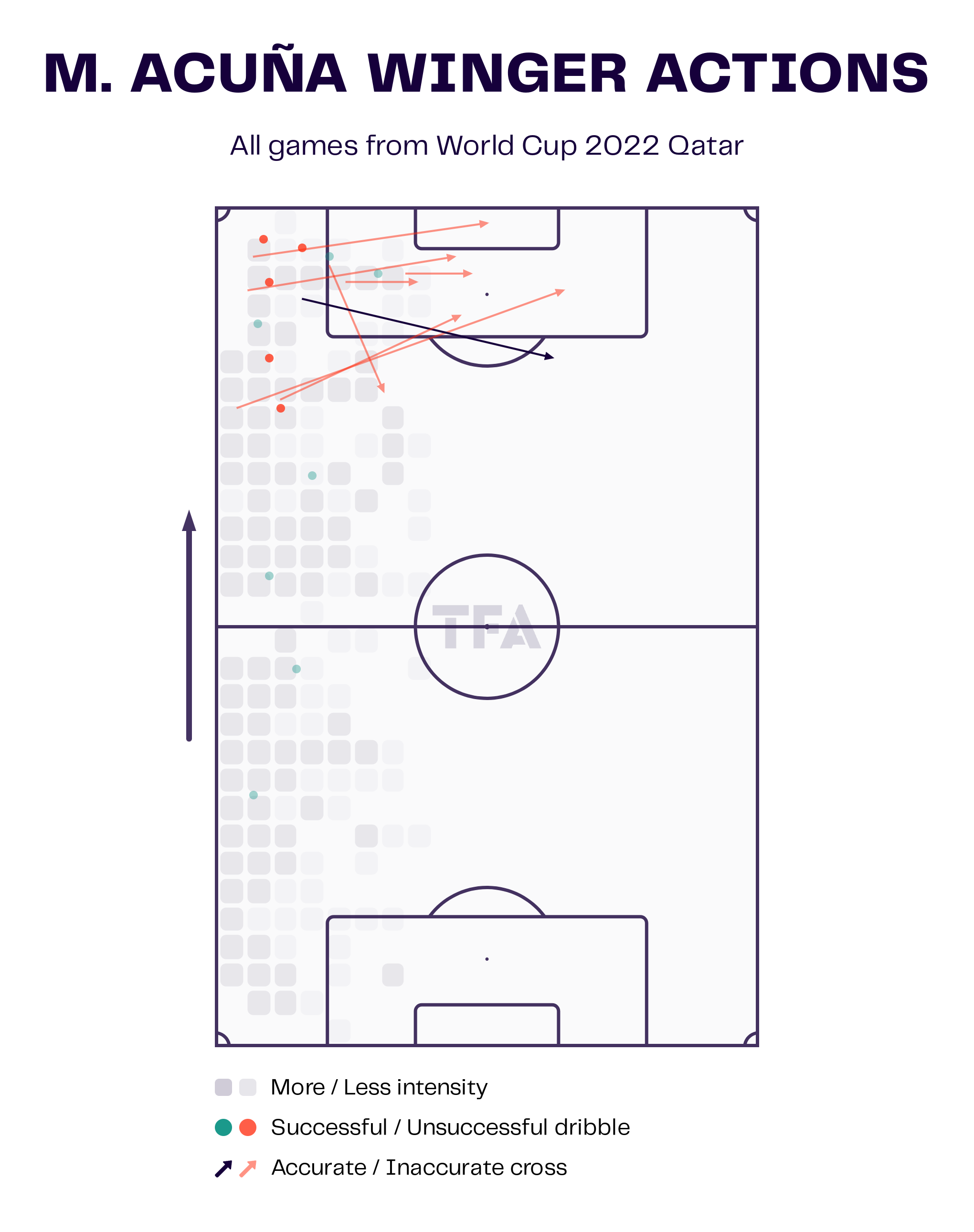 As the heat map suggests, Acuna spends so much time in the attacking half that he effectively plays as a left winger. With Julian Alvarez occupying the half-spaces, defenders are forced to mark him. This gives Acuna enough time and space to decide his next action. As the second visual shows, Acuna plays a lot of crosses into the box from the left flank. He has played nine crosses in the tournament so far, but as Argentina doesn’t have a number 9 in their ranks, these crosses are usually met by the defenders. Apart from these crosses, Acuna sometimes tries to get into the box himself and can pose a problem or two for the defenders.

Will Acuna get the nod ahead of Tagliafico in the final? 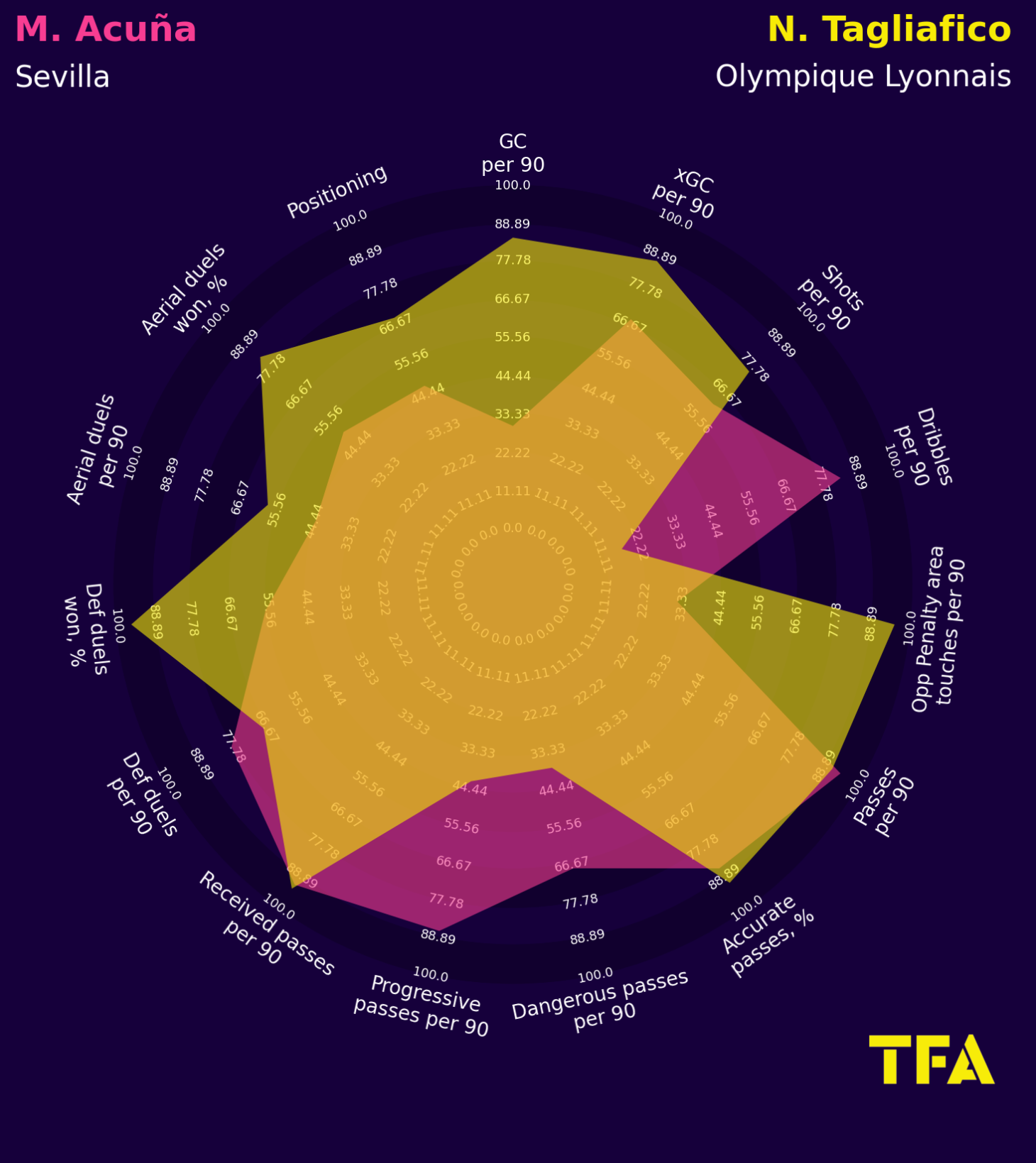 Marcos Acuna has started almost all the games for Argentina except the semi-finals where he had to sit out due to suspension. Nicolas Tagliafico filled in his role and produced a good display handing Lionel Scaloni a good headache. Tagliafico has better stats in defence but Acuna provides more going forward. But with Acuna returning in the final, it would be interesting to see who Scaloni picks to guard the left flank against a fast Ousmane Dembele.

Marcos Acuna has had a brilliant World Cup campaign. Argentina has bounced back from the shock defeat against Saudi Arabia in brilliant style, and Acuna had an important role to play in it. With World Cup glory one step away, Acuna will be itching to get out there and produce another good display.

From one car manufacturer to another – Real Madrid have changed...