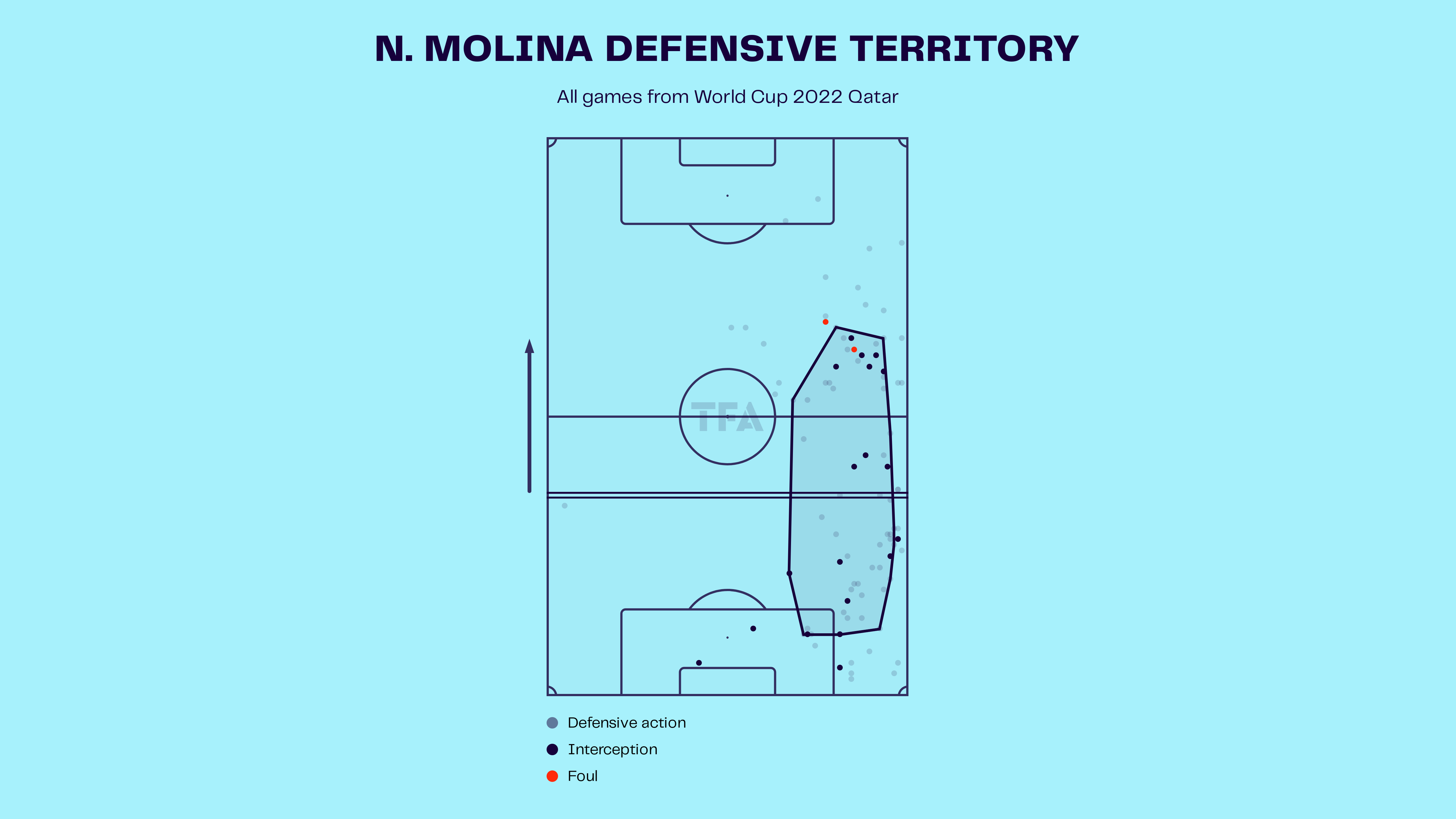 Argentina’s World Cup glory will be etched in the history books as the year when Lionel Messi won the World Cup for the first time. But Argentina had many other important contributors who did their part to ensure that they won the tournament.

One of them is the right-back, Nahuel Molina. Molina plays for Atletico Madrid in La Liga. He was an important presence as the right-back as he did his part to near perfection. Molina also scored the opening goal against the Netherlands. He also helped them score the opener against Poland in the group stages. We look at some of his stats from the World Cup to understand how impressive he was at the right-back position.

Molina played in all seven matches for Argentina in the World Cup and made six starts. He scored once in the quarterfinal and assisted one in the group stages. He maintained his place in the starting lineup with back-to-back impressive performances. 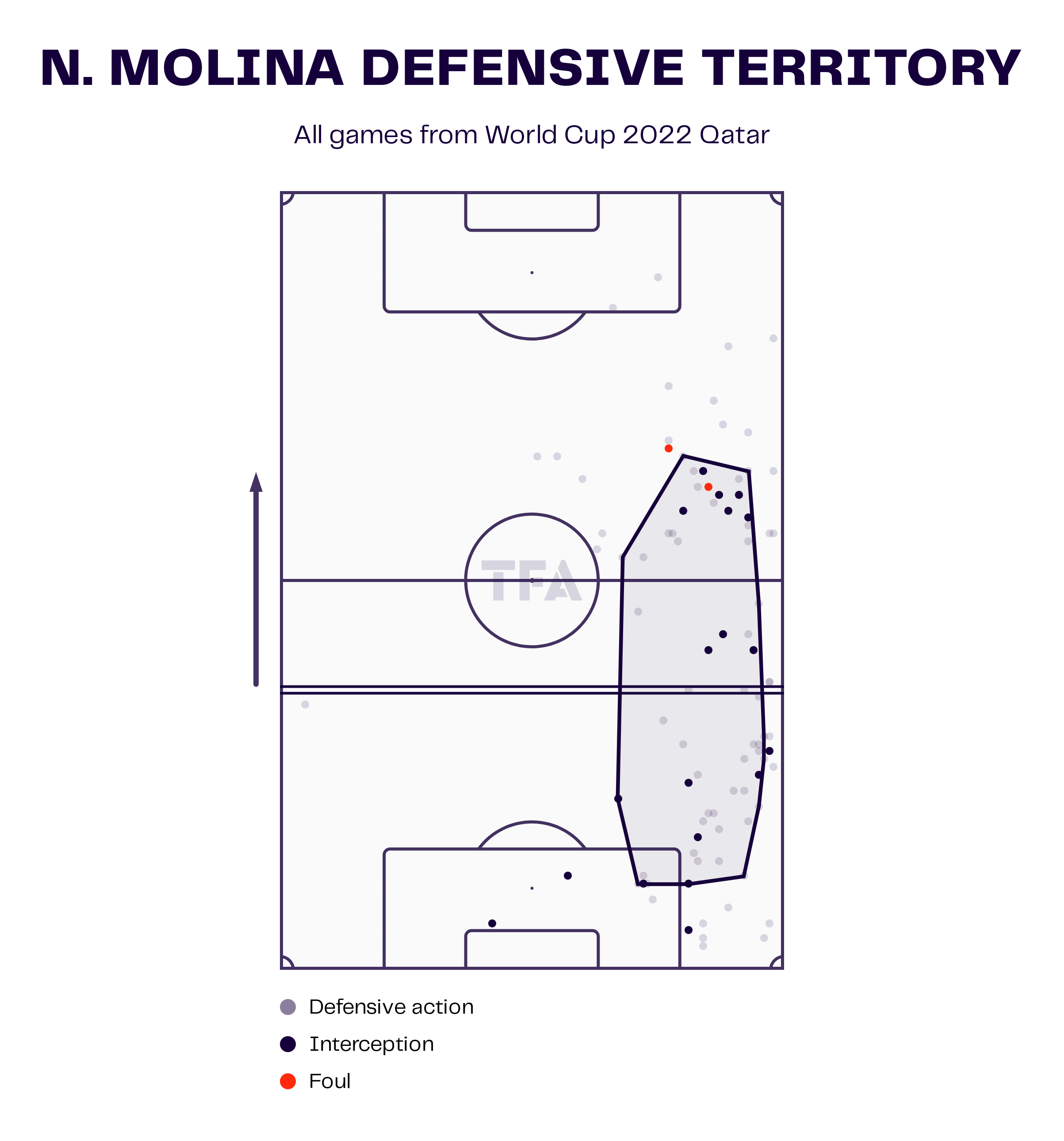 The above visual shows the defensive territory of Nahuel Molina in the World Cup. He came up against some good right-wingers and managed to keep them silent for the most part. We can observe from the visual that Molina overlapped a lot but tracked back in time whenever necessary. He made 36 interceptions in the tournament with an average of 5.03 interceptions per game. Molina saved his best for the final, as he made 11 interceptions in the game and kept a certain Kylian Mbappe quiet for a long time. He took part in 46 defensive duels and won 32 of them, for a success rate of 69.56%. He also engaged in nine aerial duels but only won one of them. Molina’s reassuring presence at the back was important for Argentina in the World Cup. 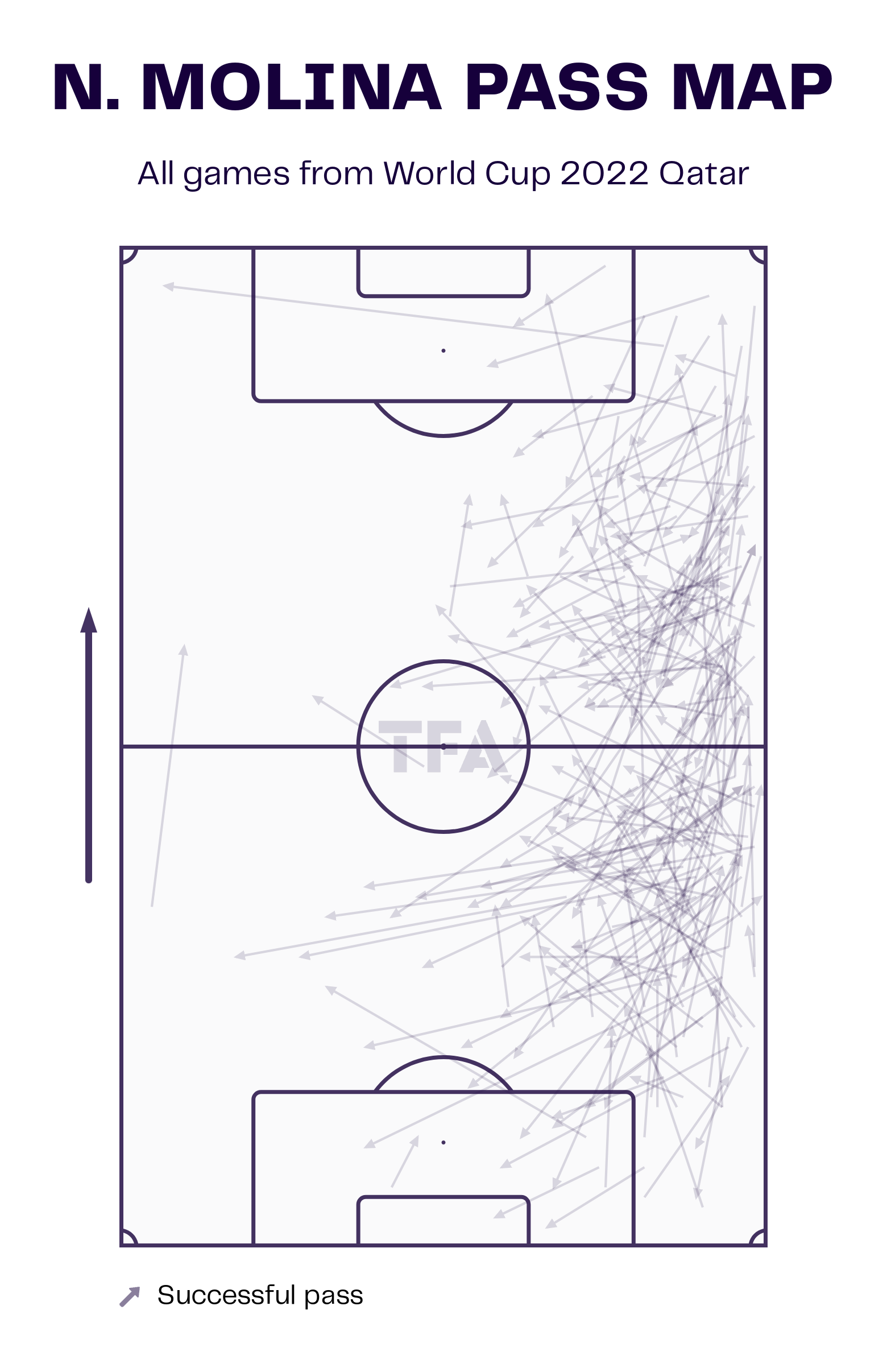 The above visual shows the pass map of Molina in the World Cup. We can observe from the pass map that he covered the entire right flank in the tournament. He made a total of 298 passes and completed 247 of them with a passing accuracy of 82.88%. Molina overlapped a lot and occupied a lot of attacking positions. He made an average of 4.89 passes into the final third with a success rate of 65.7%. Molina also played seven crosses into the box. 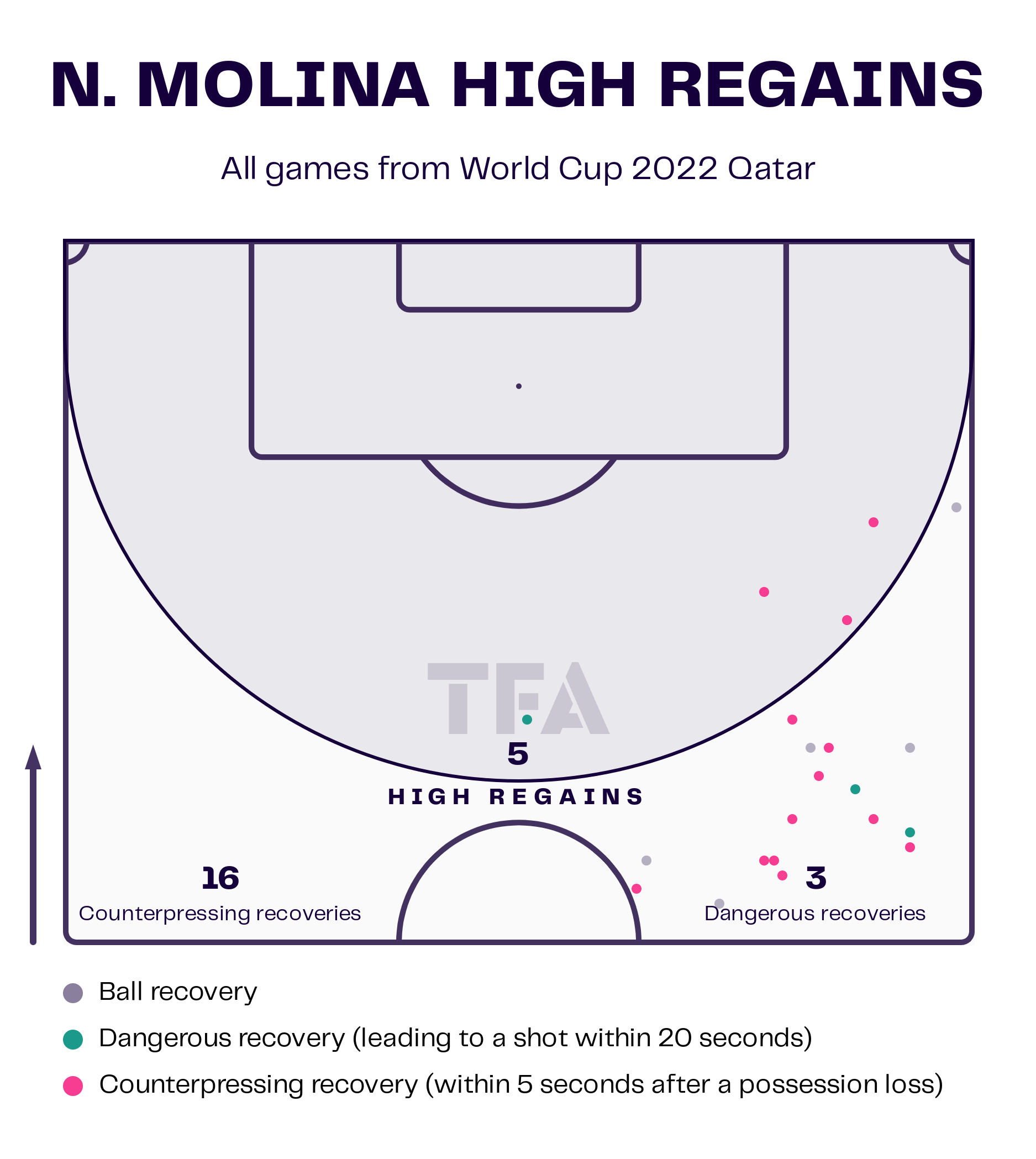 Why did Molina start in place of Montiel? 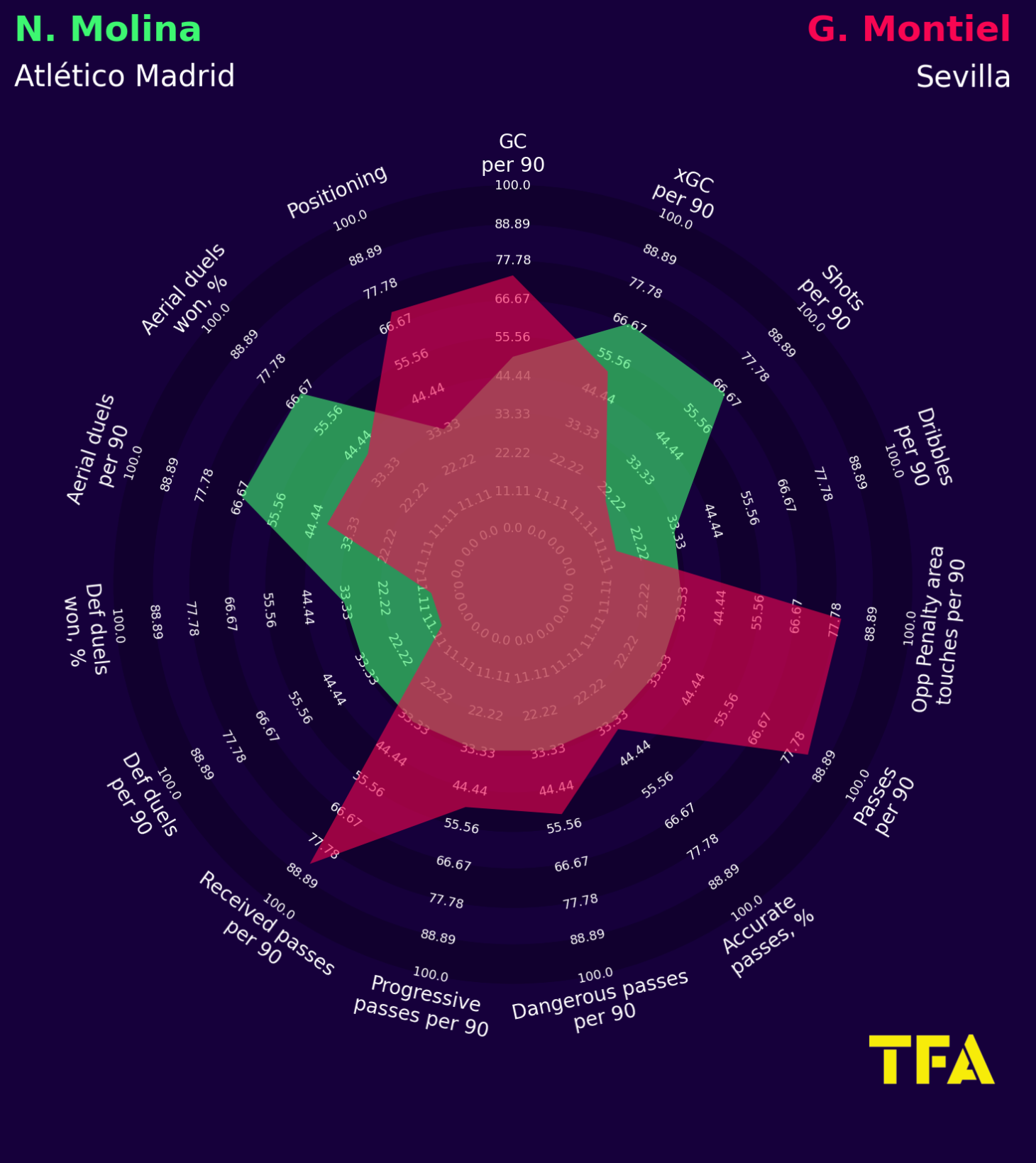 The above visual compares the radars of the two Argentinian right-backs, Nahuel Molina and Gonzalo Montiel. Molina was preferred over Montiel as the right-back in almost all the matches, except the one against Mexico. We can observe from the visual that Molina does better defensively and has better stats than Montiel. He also takes more shots per game than the Sevilla right-back. Montiel, on the other hand, has better passing stats and positions himself better.

Nahuel Molina was an important player for Argentina, as the stats suggest. His defensive contributions were near-perfect and were good going forward as well. His opening goal against the Netherlands turned out to be crucial in hindsight, with the Dutch pulling two back in the last minute. With the World Cup glory, Molina has impressed everyone and will be raring to go in La Liga as well.