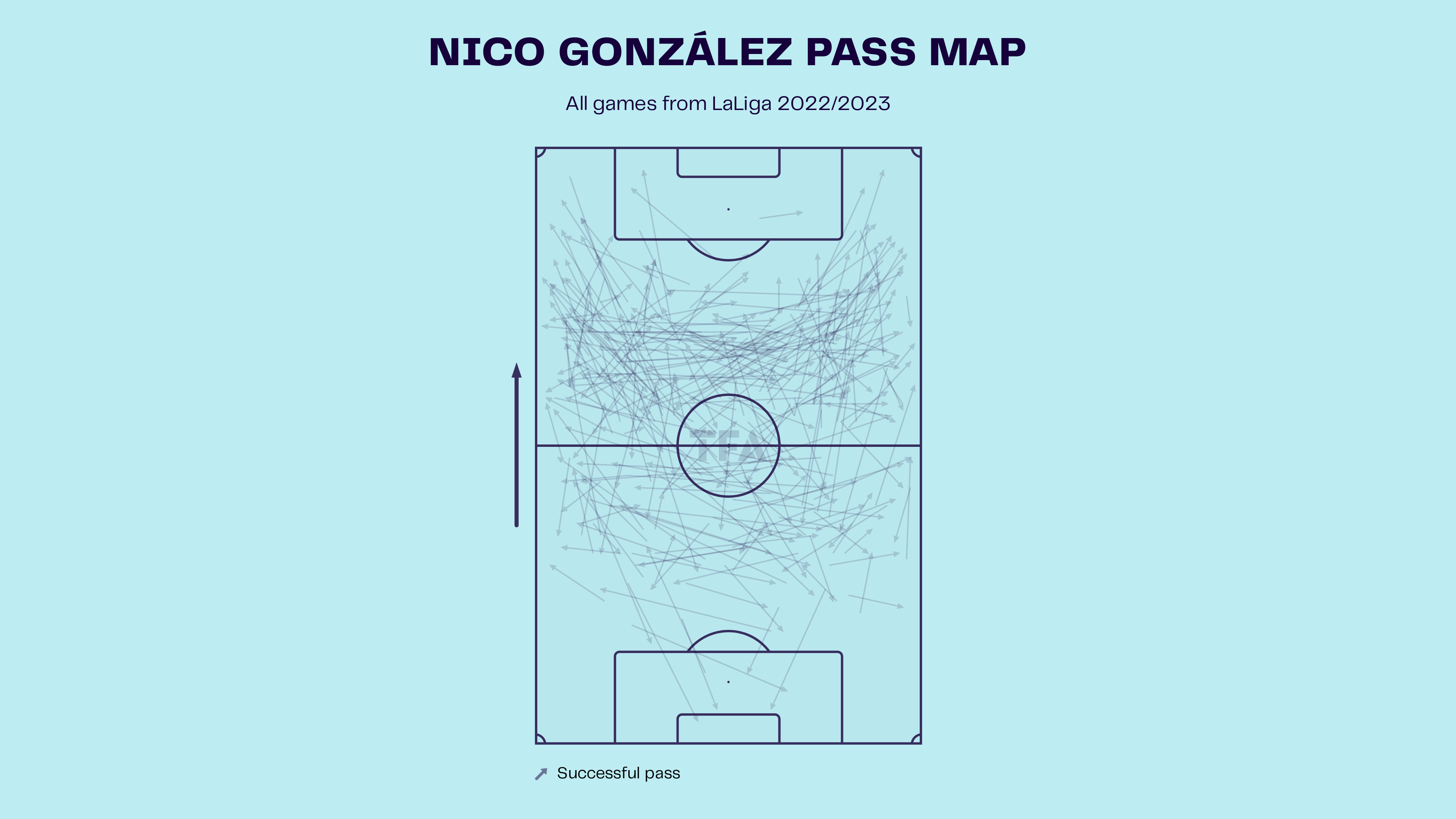 Last year, a couple of La Masia graduates burst onto the scene for FC Barcelona. While one of them went on to win the Golden Boy Award this year, the other one had to find a way to move away from his boyhood to find game time.

Nico Gonzalez, who was named as the natural heir of Sergio Busquets, had to make the difficult choice of playing for Valencia instead of Barcelona as Barca had a surplus of midfielders. His move to the currently tenth-placed side in La Liga started with him scoring a goal in his first start of the season.

But things didn’t go as planned for him after that. He conceded an own goal in the game against Rayo Vallecano and has only started two games after that. We look at some of his stats to understand why a move to Valencia has not worked out well for the youngster. 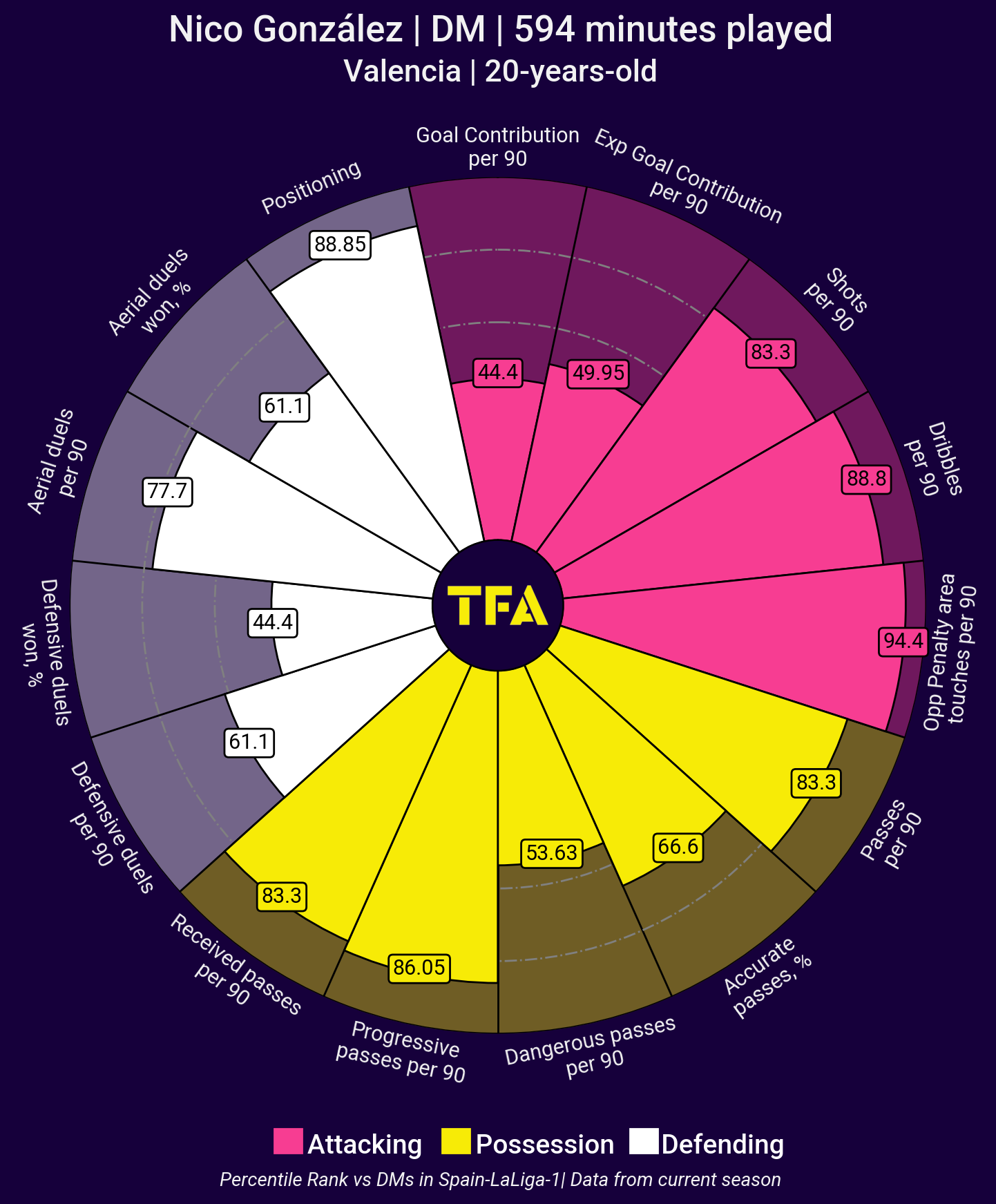 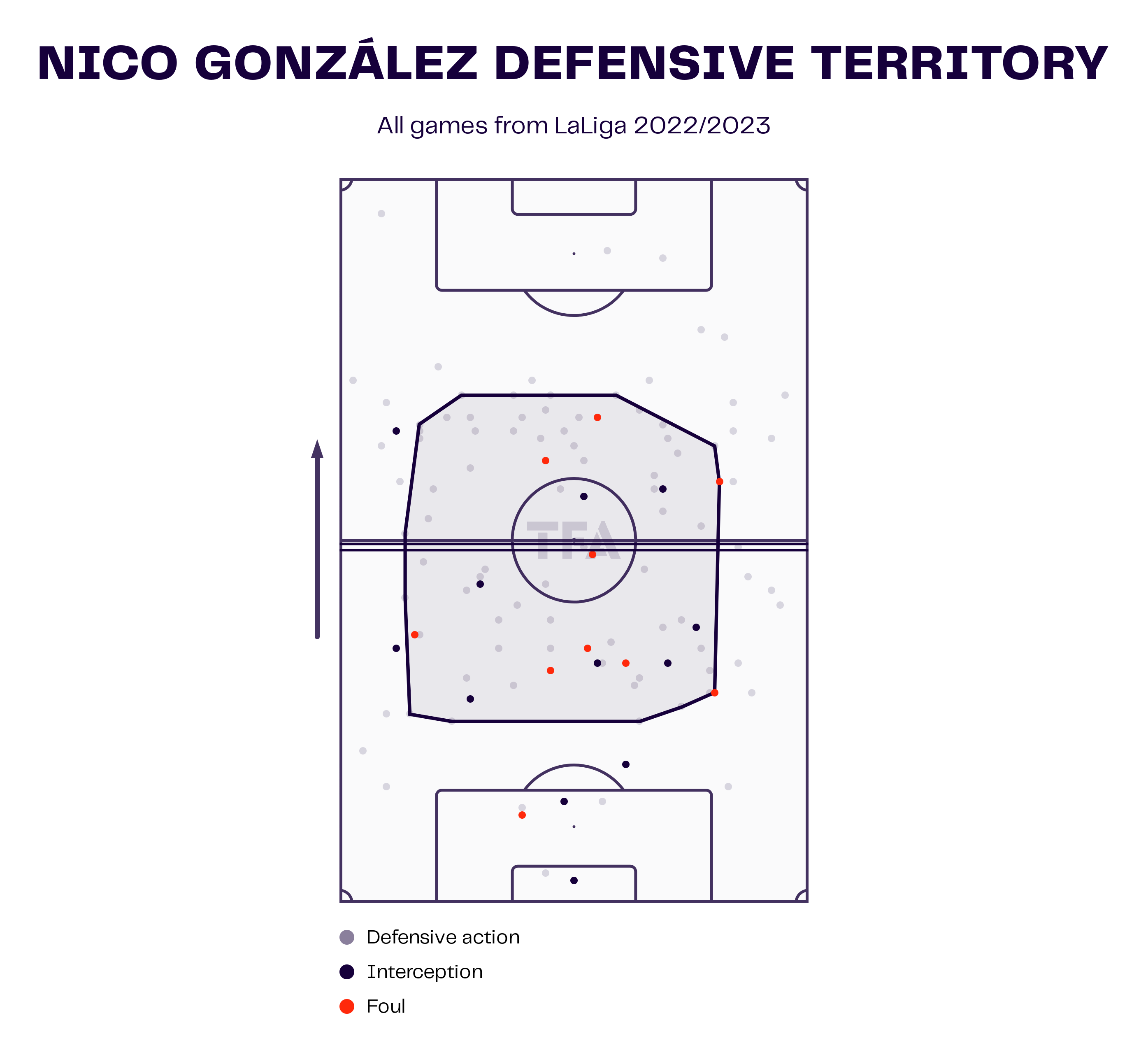 Nico can play both as a central midfielder and as a defensive midfielder. The twenty-year-old has improved defensively, and his stats indicate that. He sits in the centre of the field, makes some important interceptions, and switches the game from defence to attack. For Valencia, Nico has made an average of 3.37 interceptions per game. This has increased from an average of 2.69 interceptions per game last season. He also makes around 8.07 defensive duels per game with a 60% success rate and 2.64 aerial duels with a 61.1% success rate. His success rates in the two have also gone up, from 52.3% to 60% and from 33.3% to 61.1%, respectively. 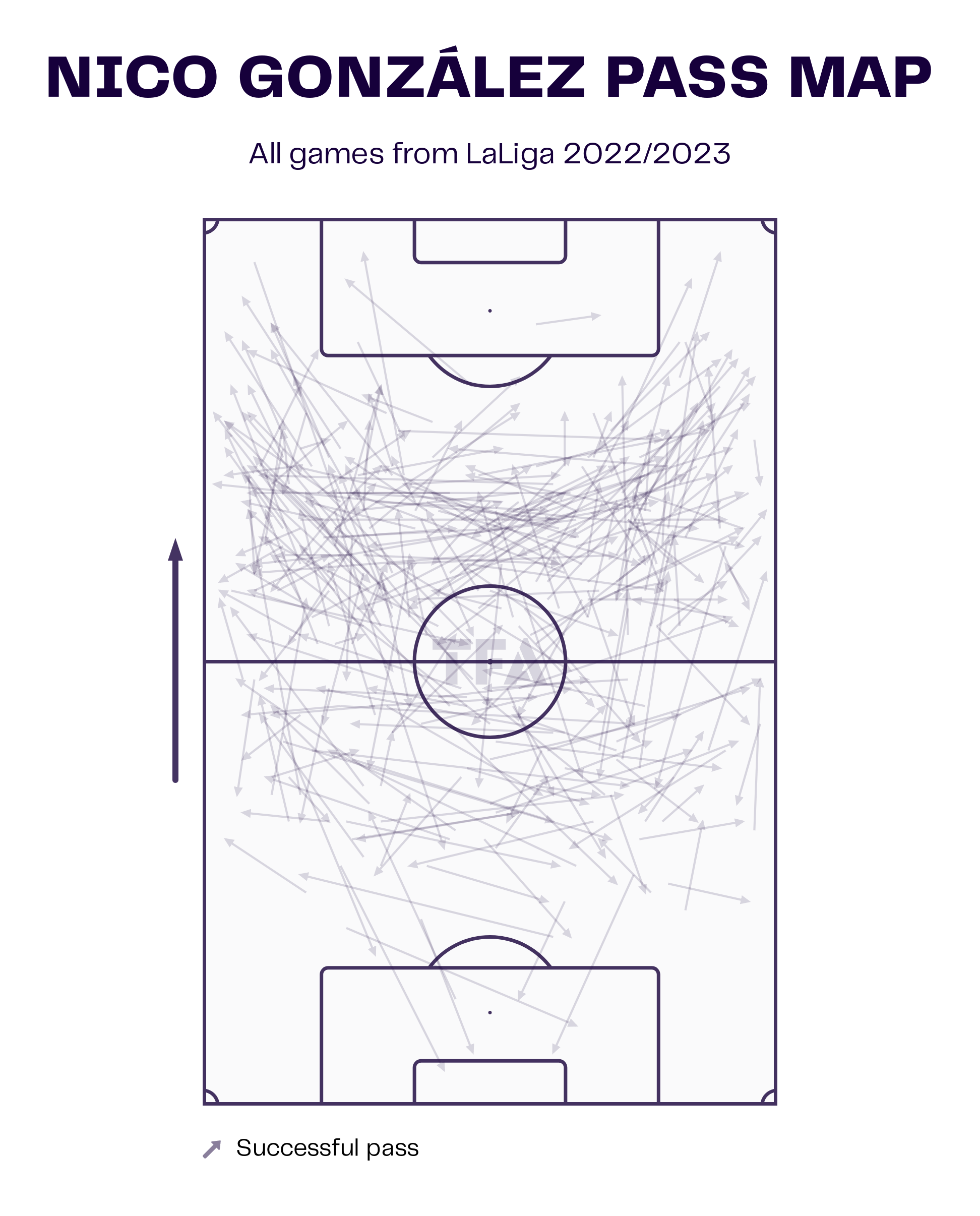 The above visual shows the pass map of Nico Gonzalez in La Liga this season. He has a passing accuracy of 92.9% this season and makes around 65 passes per game. Since he also plays as a defensive midfielder, he sometimes goes deep into the midfield to collect the ball and find the right pass. In the final third, he plays an average of 11.96 passes with an accuracy of 89.6% and around 1.17 passes into the penalty box with a 43.8% accuracy. Passing was one of Nico’s great strengths during his time at Barcelona, and he has continued that form in Valencia as well. 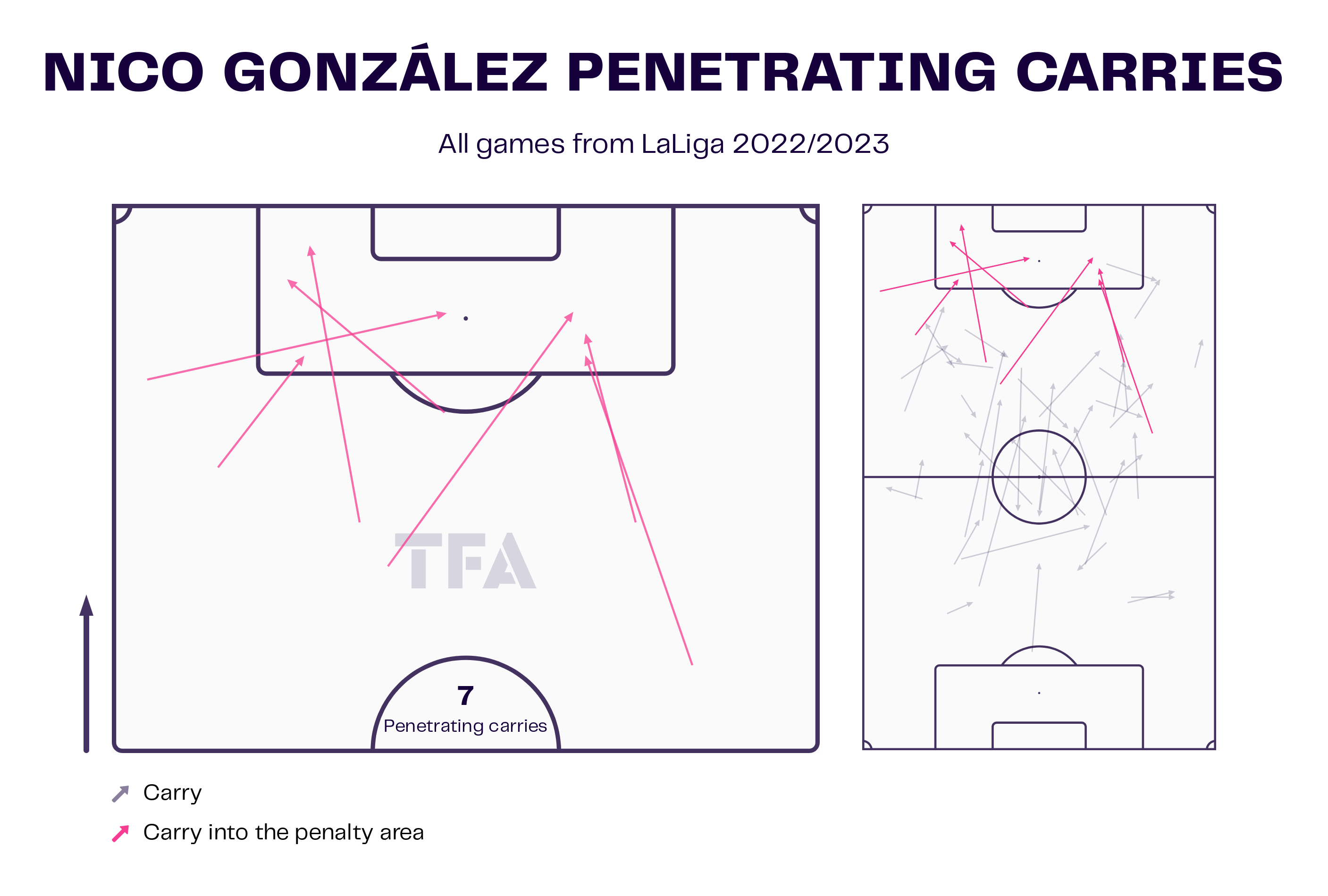 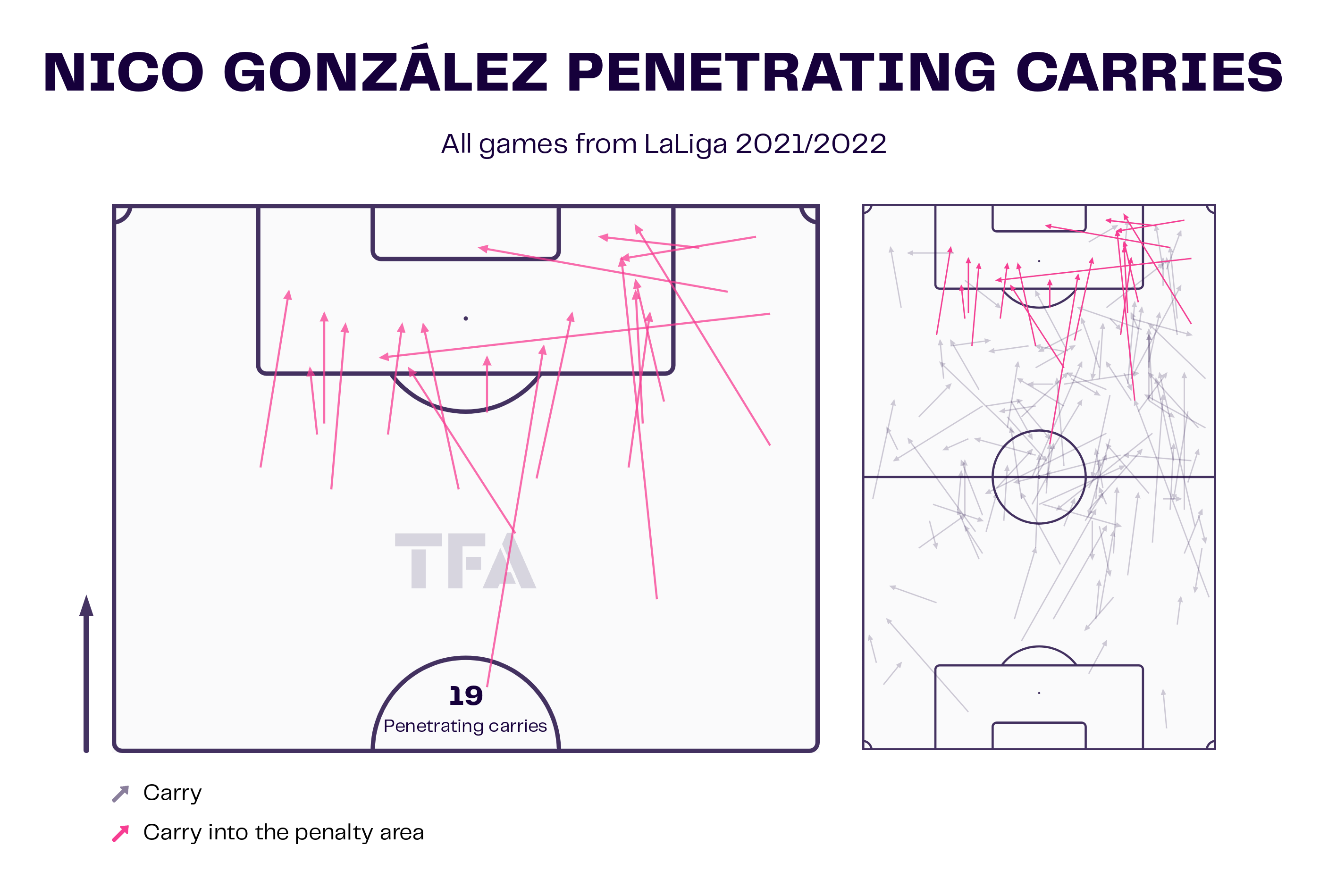 Can Nico become the next Busquets? 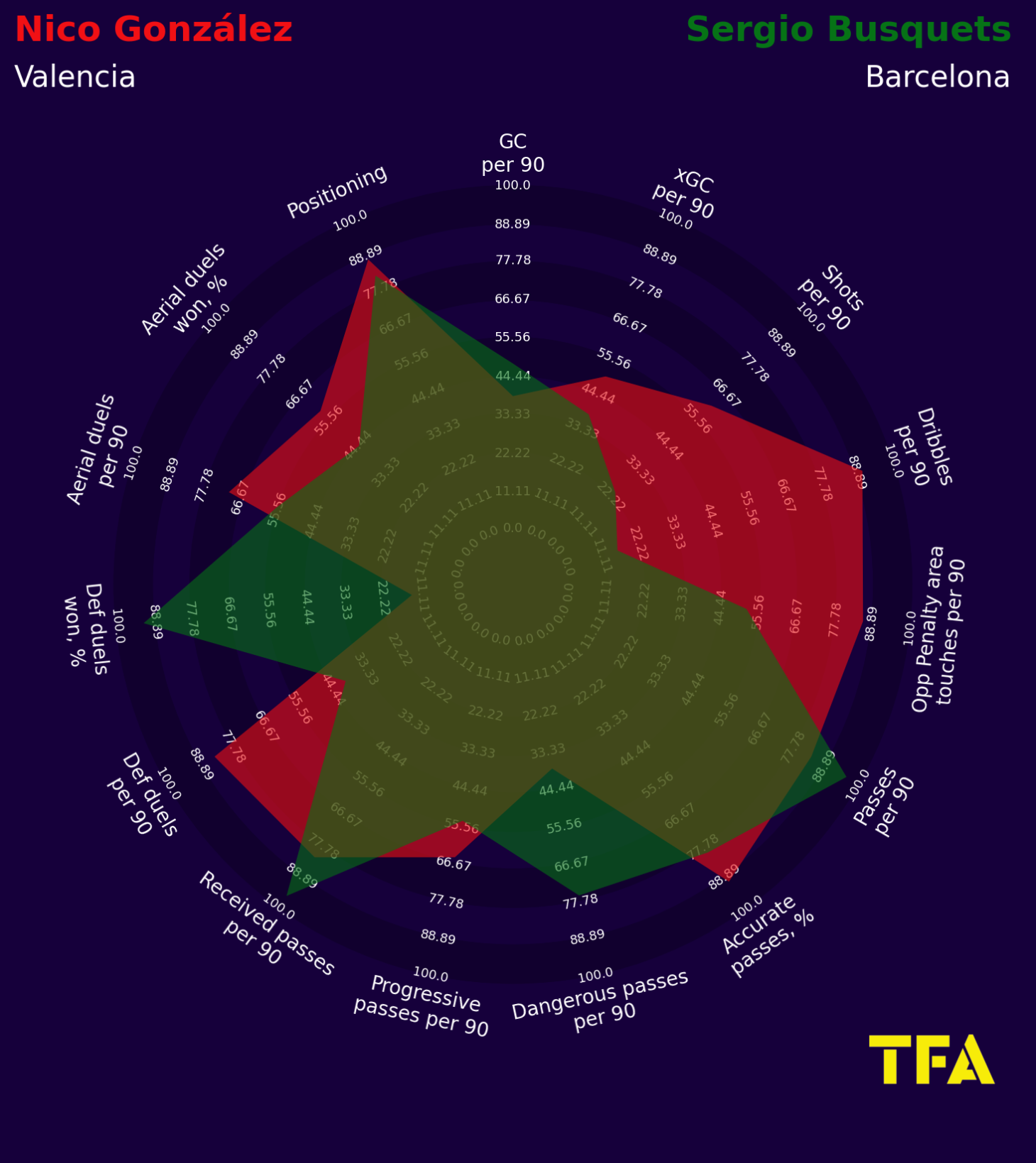 Because Nico Gonzalez is regarded as the next Busquets, we compare the two players to see if he can succeed the Spanish legend. The 20-year-old has better stats than Sergio Busquets in dribbles, shots, and entry into the penalty box. Nico also does better aerially and defensively. The veteran, on the other hand, has better stats in passes per game, dangerous passes, defensive duels won, and passes received. Nico is still young and has a lot to learn, but if he makes a return to his boyhood club, he has all the ingredients to be the successor to his role model.

Nico Gonzalez is one of the best talents to emerge from the ranks of La Masia in recent years. He has all the ingredients to become a successful player, but his stint with Valencia has not turned out well, as he ended up with just five starts from 12 matches. However, the youngster will be looking to turn luck in his favour as the season restarts.