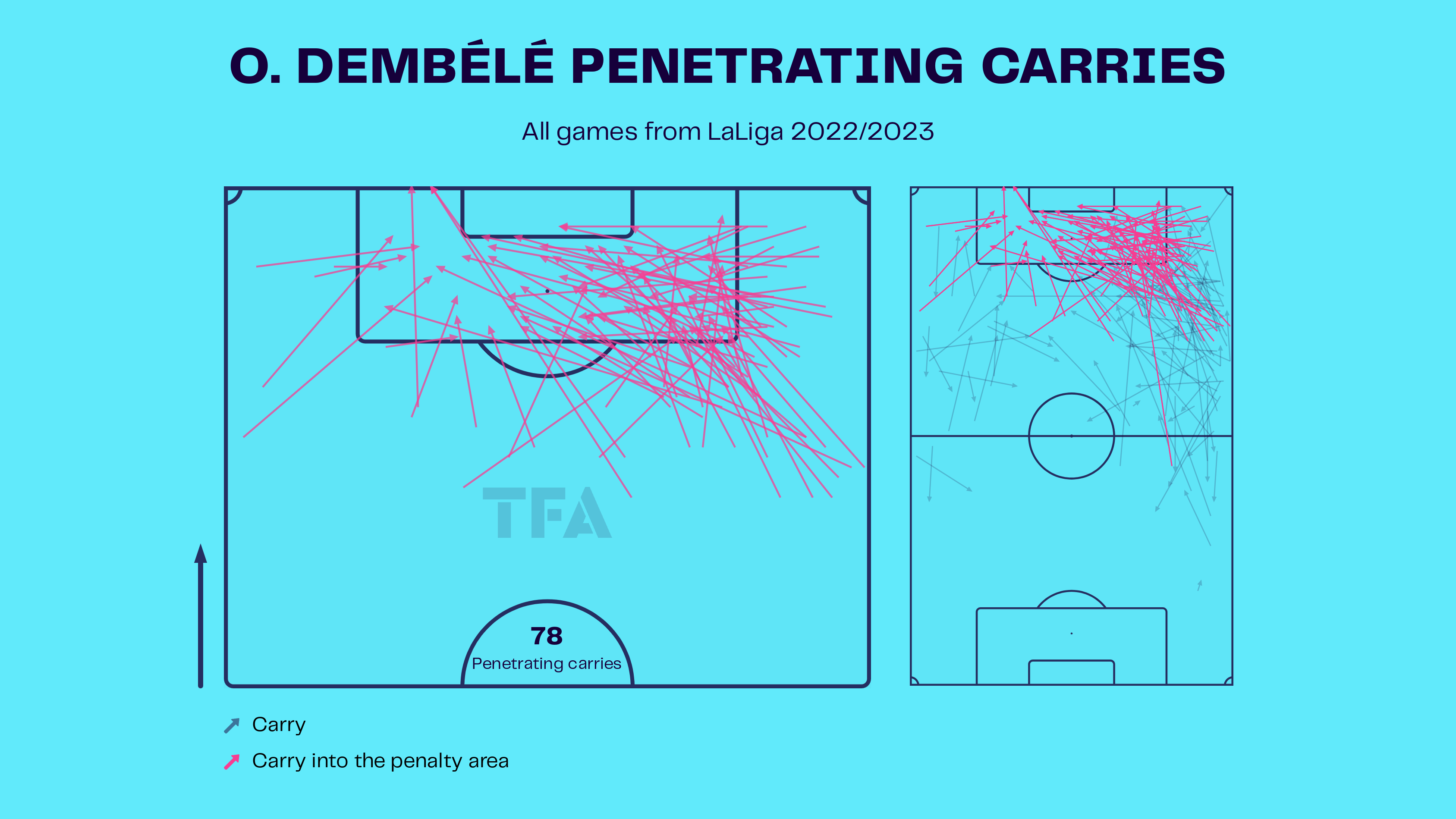 Ousmane Dembele’s contract renewal was one of the biggest sagas of the summer transfer window, with the Frenchman wanting to leave for a better salary. But in the end, he ended up staying and has produced some quality performances as well. Xavi Hernandez always had trust in Dembele and wanted him to stay. Dembele is a unique player with a unique set of skills. He can dribble and shoot with both legs, take on players 1v1, and provide some good crosses as well. He was the player with the highest number of assists in La Liga last season. We take a look at some stats to understand how Ousmane Dembele has performed since his contract renewal at Barcelona.

Ousmane Dembele has played all 14 matches in La Liga this season for Barcelona and has four goals and five assists to his name. He has been a regular starter in Xavi’s side, starting 11 matches and coming off the bench in the remaining three. He has also scored a goal in the Champions League. Dembele’s contributions have been critical for the Blaugranas this season, as they currently sit atop the table heading into the World Cup. 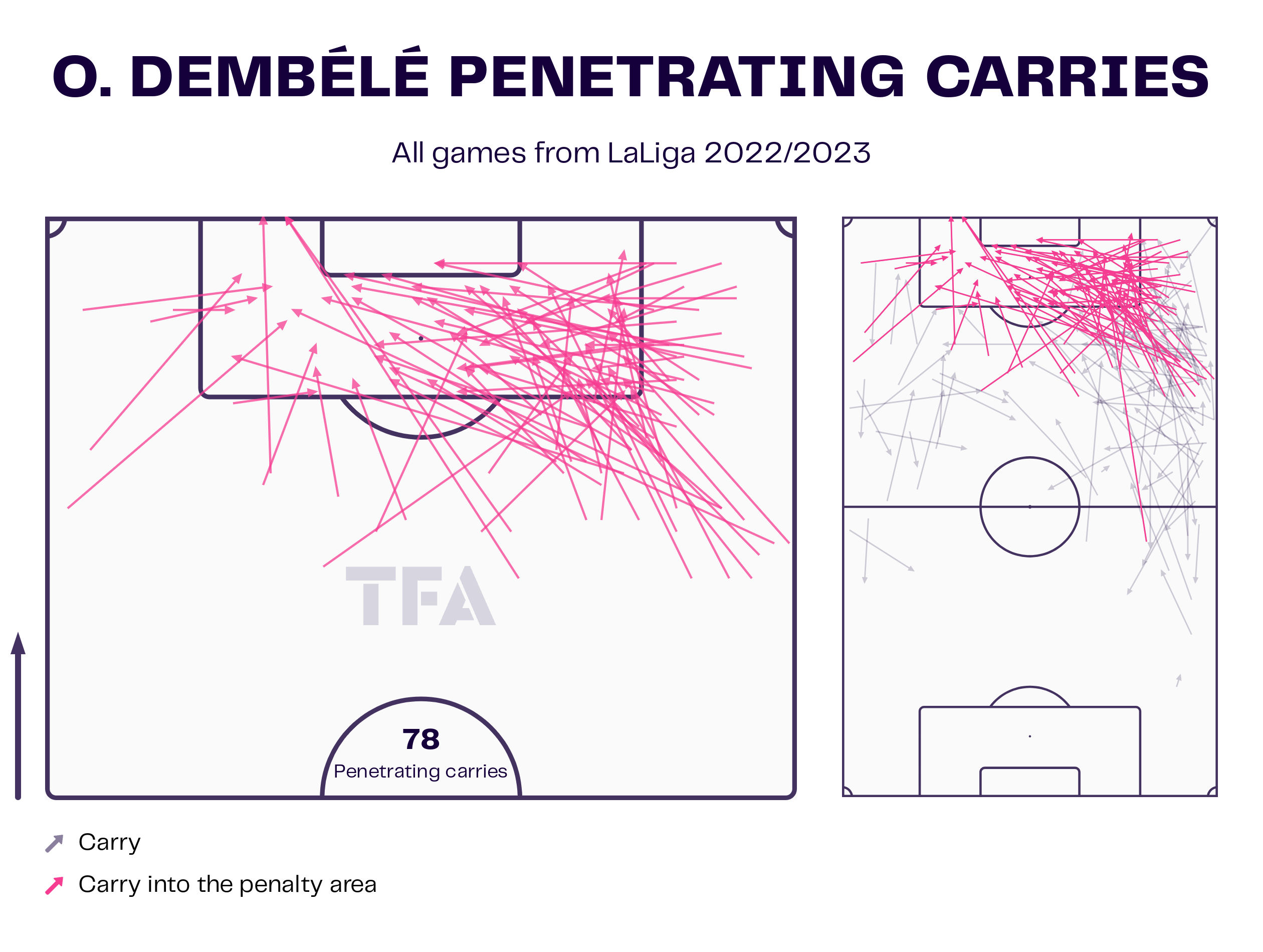 Dribbling is undoubtedly Ousmane Dembele’s best quality. He stays wide and collects the pass, then takes on defenders with his pace. It is almost impossible to stop Dembele on his day as he can go past any player with his pace. He prefers playing on the right wing but can play on both sides of the field. He makes around seven dribbles per game on average, and his dribbles have often been the difference for Barcelona. This stat, even though it is good on its own, looks a bit slim compared to his stats last year. Last season, Dembele averaged 11.82 dribbles per game with a 64% success rate.

The only thing that almost everyone agrees he should improve on, though, is his decision-making. Sometimes he dribbles for too long, while other times he releases the ball early. But when he gets it right, there are a few players that can stop him. 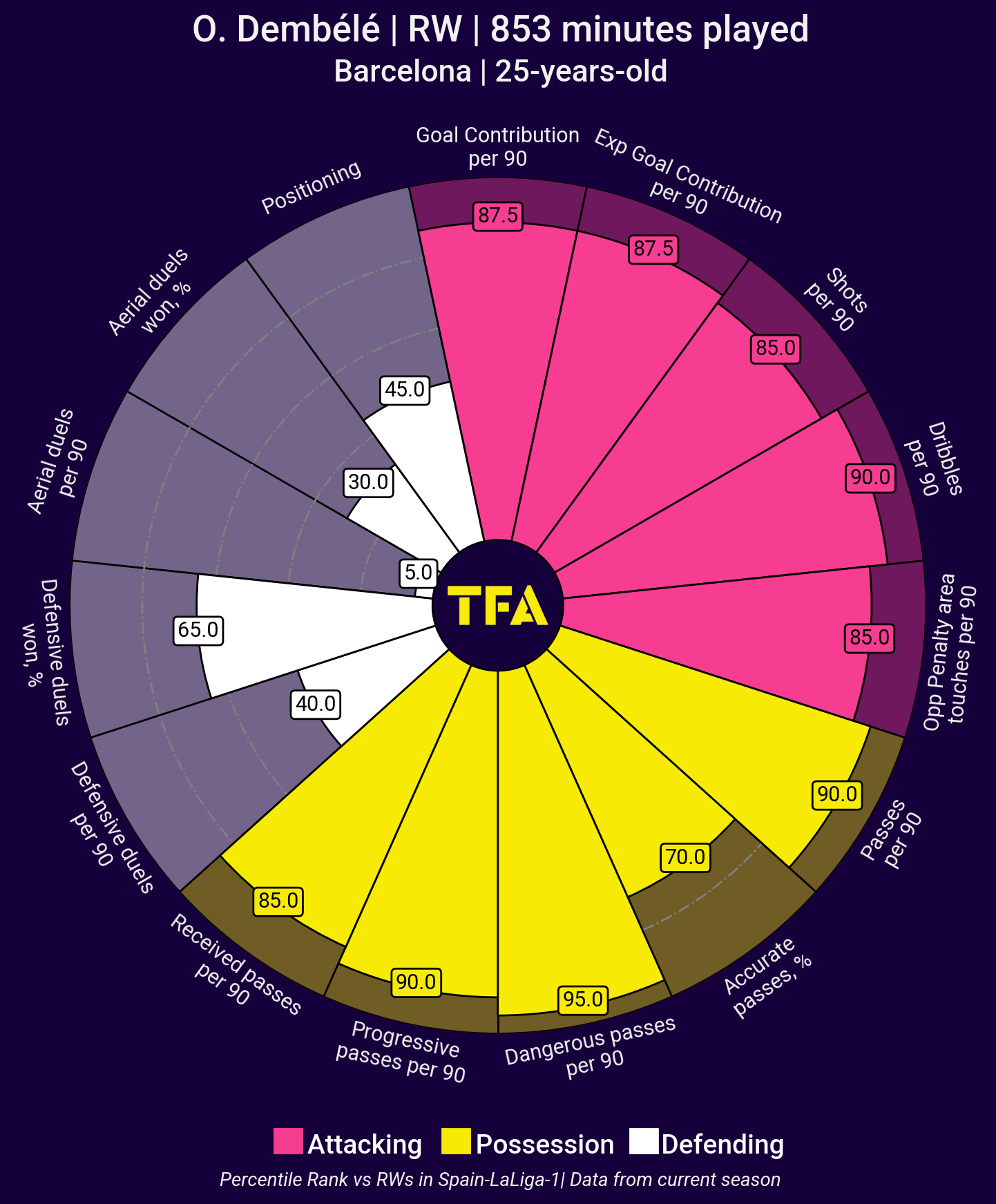 The above viz shows the percentile rank of Ousmane Dembele compared to other right-wingers in La Liga this season. He is in the top 90 percentile for dribbles per game and makes around six progressive runs per game as well. Dembele also ranks in the top 87.5 percentile for goal contributions. His contribution was crucial for Xavi Hernandez’s side last season, as the winger racked up 13 assists to his name and was a key figure in Barcelona’s attack. He has managed to look ominous this season as well, but with a lack of consistency. But it would only be fair to say that he was the man they turned to whenever they needed to create some danger in the attacking third. 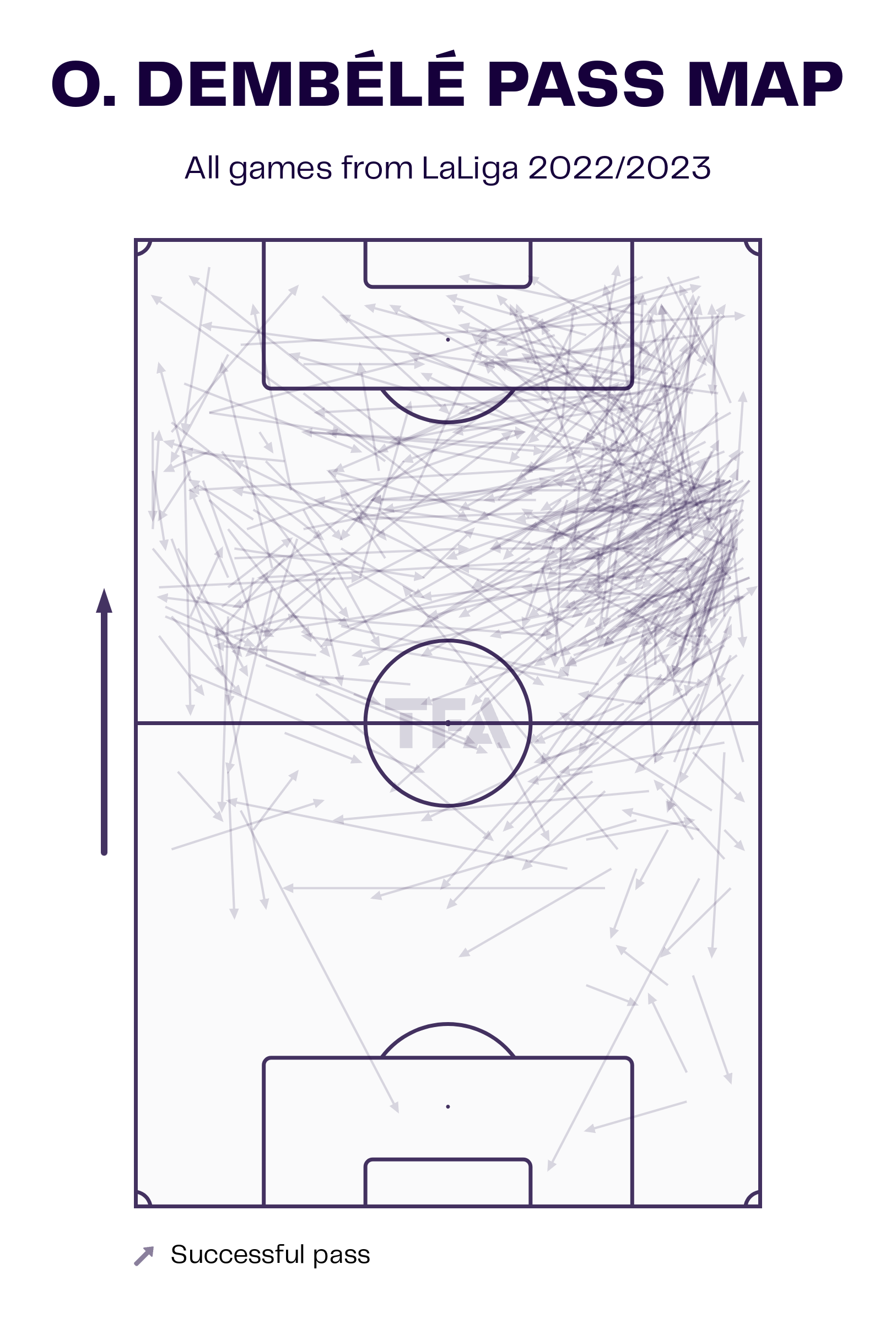 As the pizza chart suggests, Ousmane Dembele ranks among the top 90 percentile for passes per 90 and the top 95 percentile for dangerous passes per game. He constantly whips dangerous passes into the box, and the presence of a striker like Robert Lewandowski has helped Barcelona a lot. Again, the only problem with Dembele is his inaccuracy. He sometimes fails to see the pass to combine with other players or to run into spaces. Dembele made 2.41 passes to the final third and 5.69 passes to the penalty box this season. However, his numbers were better last year, as he made 3.06 passes into the final third and 6.67 passes into the penalty box. 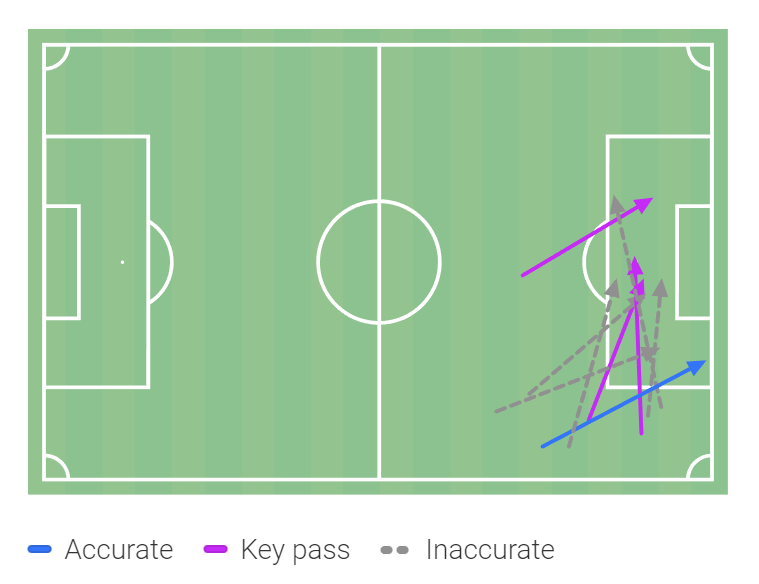 This visual is from last season, when he made nine passes into the penalty box and completed four of them, with three of them being key passes. Barcelona won that match 4-0 against Osasuna, and Dembele added two assists to his name as well. His regular supplies into the penalty box were a crucial part of Barcelona’s attack last year. 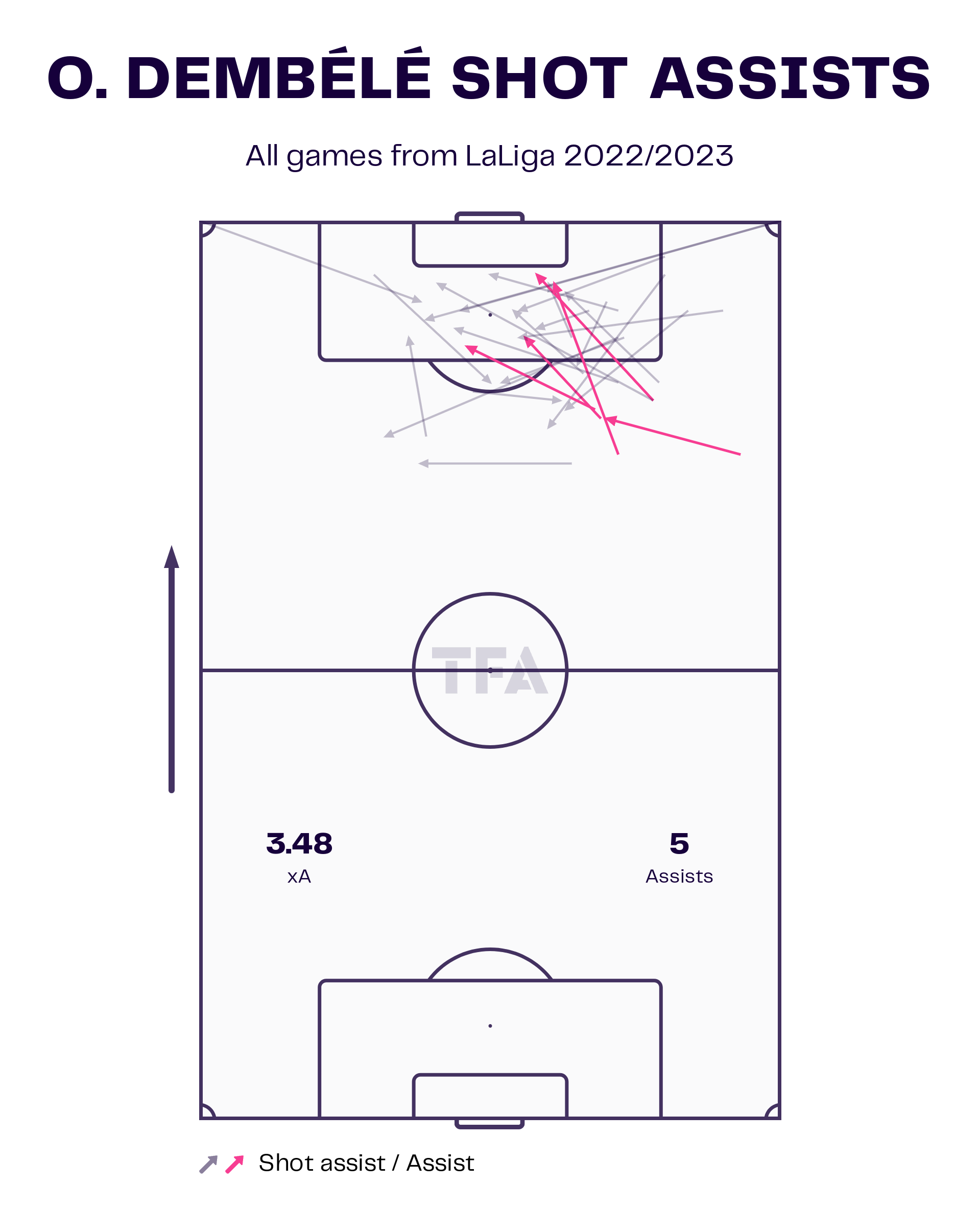 Ousmane Dembele has five assists to his name already this season. He scored one goal and assisted on three others in a near-perfect game against Athletic Club. The best part about that performance was how he combined with his teammates and made life difficult for the defenders. He makes an average of 0.48 assists per game and has been an important figure for the Blaugranas. 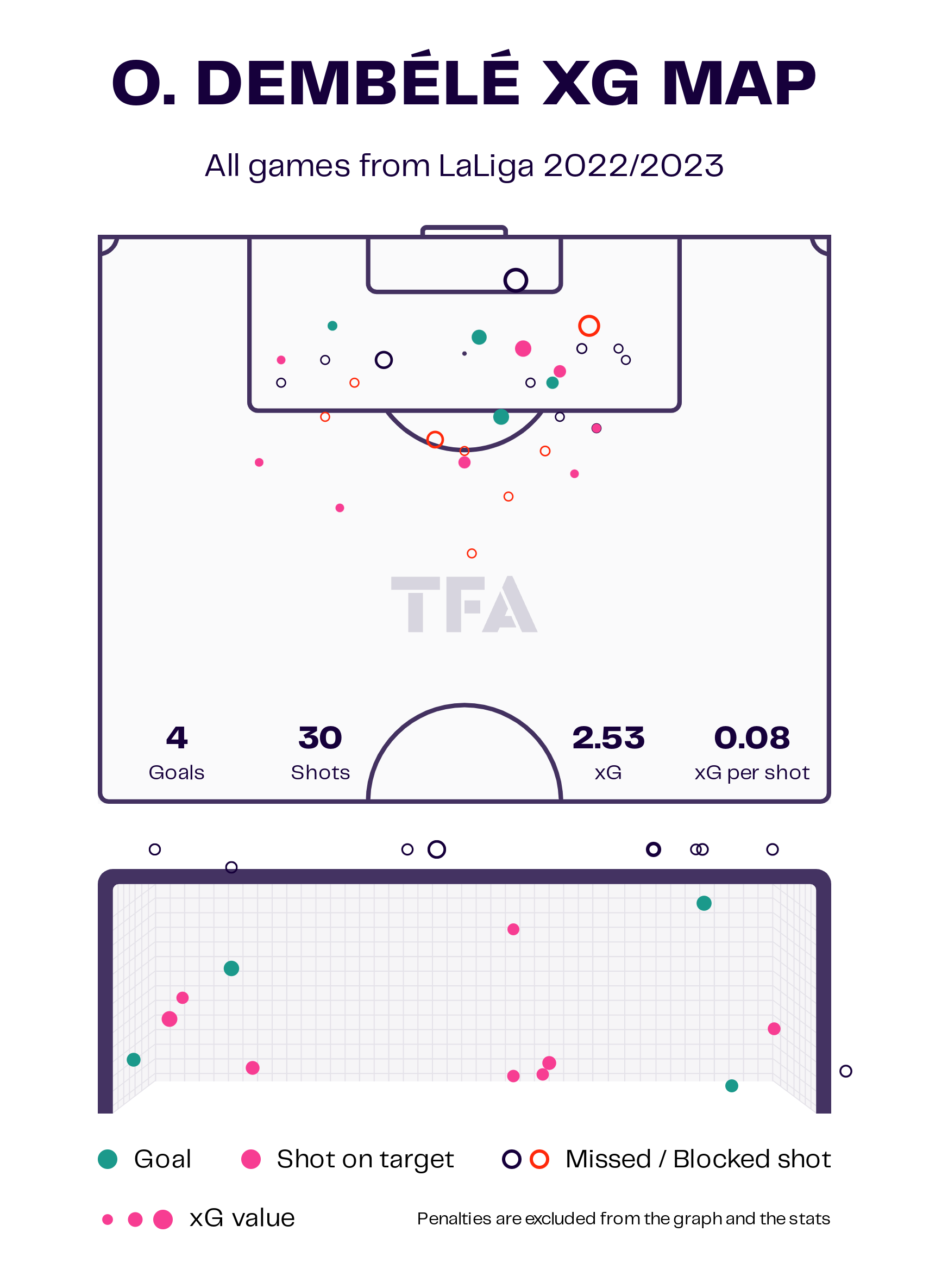 One thing lacking from Dembele last year was goals, as he only scored one in the entire season. He has improved his stats this year and has scored four goals in La Liga so far. But the fact that he usually stays wide on the wing and has to cut in to score goals brings the xG down a bit. He has a low xG of 0.08 per shot. He scored only one goal in the Champions League this season, and the lack of goals affected the team as well. 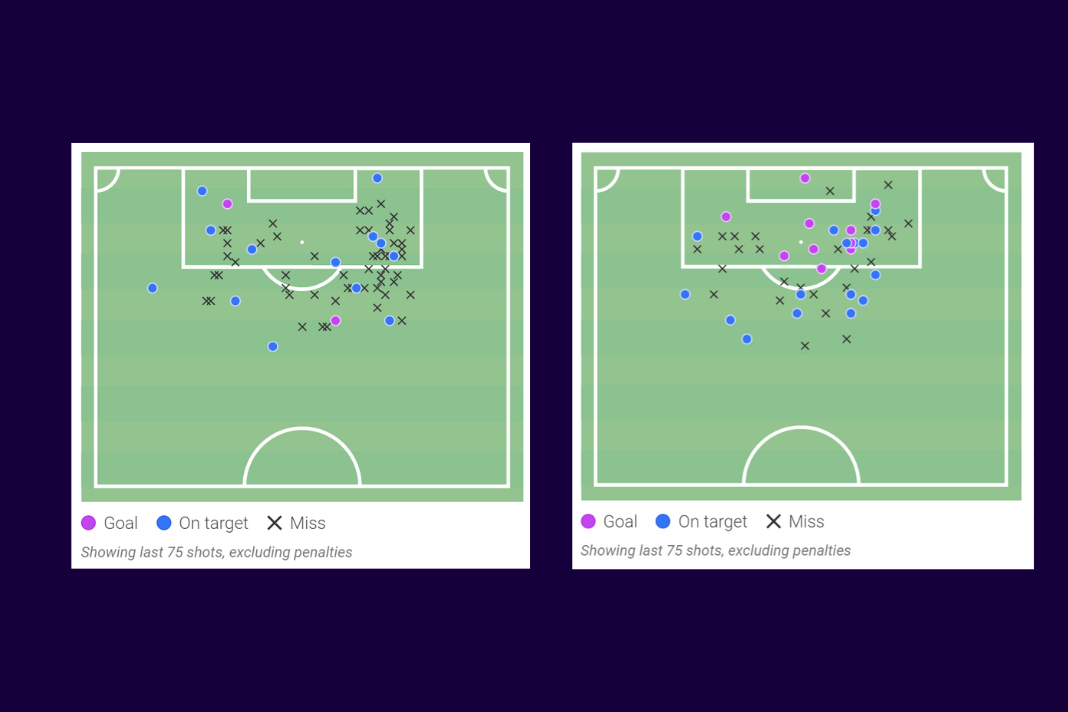 The above viz compares Dembele’s shots from this season and last season (including pre-season). The viz on the left is from last season, and the viz on the right shows his shots from this season. We can observe how Dembele has improved his scoring and finishing. He only scored one goal in La Liga last year, while this year he has scored four. We can also observe how the number of misses has decreased this year.

The 25-year-old has taken 16 shots from inside the penalty box but has finished only three of them. He also takes 4.05 touches in the opponent’s penalty box on average. However, this stat has also seen a decline as it came down from an average of 4.89 touches last year. Considering the importance of Dembele in the attack, Xavi Hernandez will be urging the Frenchman to improve his finishing even more.

Ousmane Dembele’s career has been a pendulum swinging from one end to the other. He has looked threatening whenever he had the ball and has dribbled past players so many times as well. But at the same time, he has made many poor decisions in the final third, thereby taking away the effect of his dribbling and skills. The drop in numbers this year following contract renewal will also bother Xavi and the company. However, if Dembele manages to produce these numbers in a more consistent manner, there is no doubt that Barcelona will be a hard team to defend against.

The Data Zone: Barcelona win game against Getafe in first half

How did Atlético Madrid overcome a disappointing Leganés team?