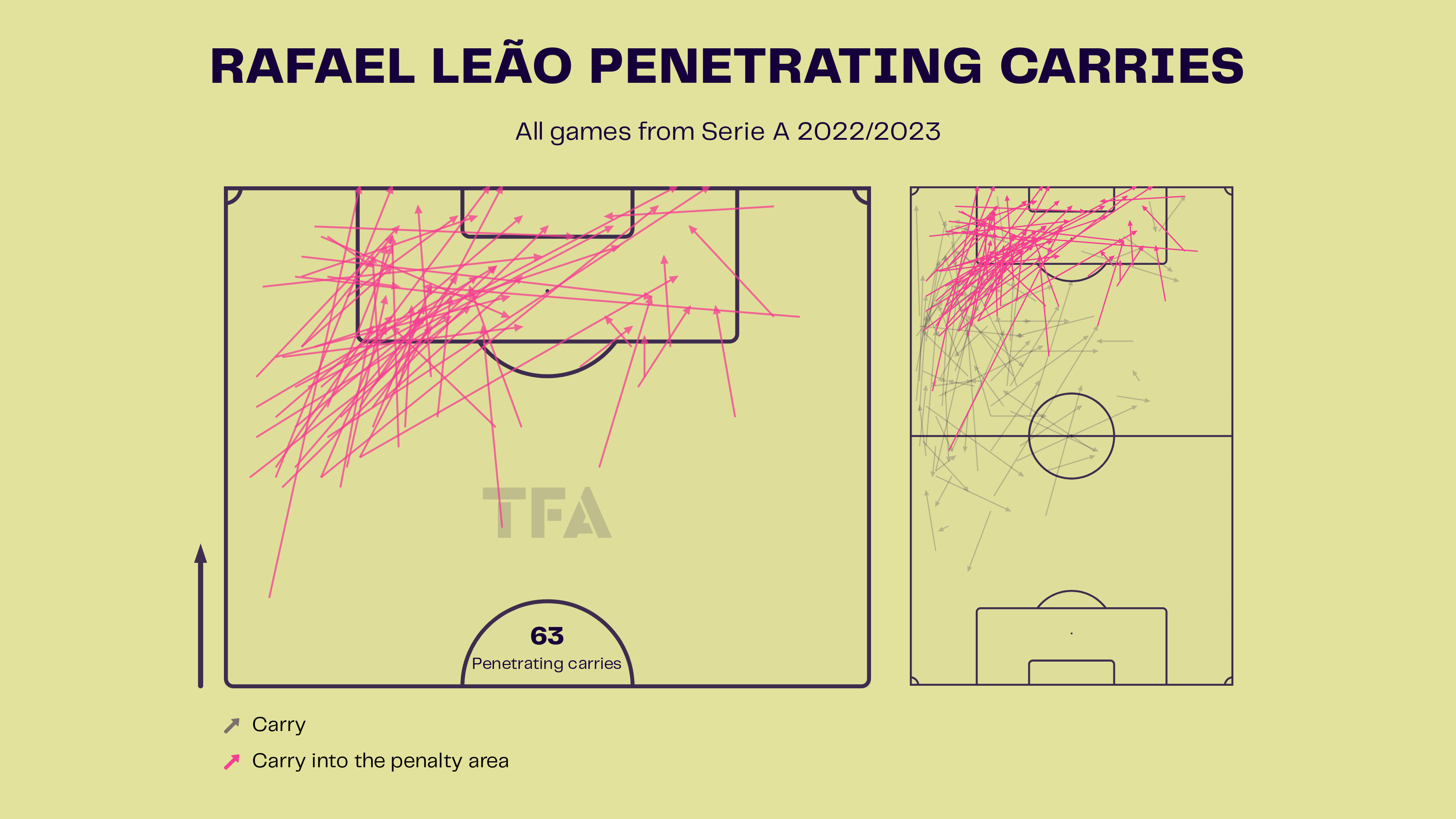 Real Madrid won everything last season from La Liga to the Champions League. One of the main contributors towards their successful season was a Ballon’d Or winning campaign from Karim Benzema. But the player has picked up an injury that could potentially rule him out for the season. Therefore, Real Madrid is looking for someone to replace the injured Benzema. Rumours suggest that Carlo Ancelotti wants the Portuguese youngster Rafael Leao to replace Karim Benzema. We look at some stats to understand how Rafael Leao could help Real Madrid defend the La Liga title. 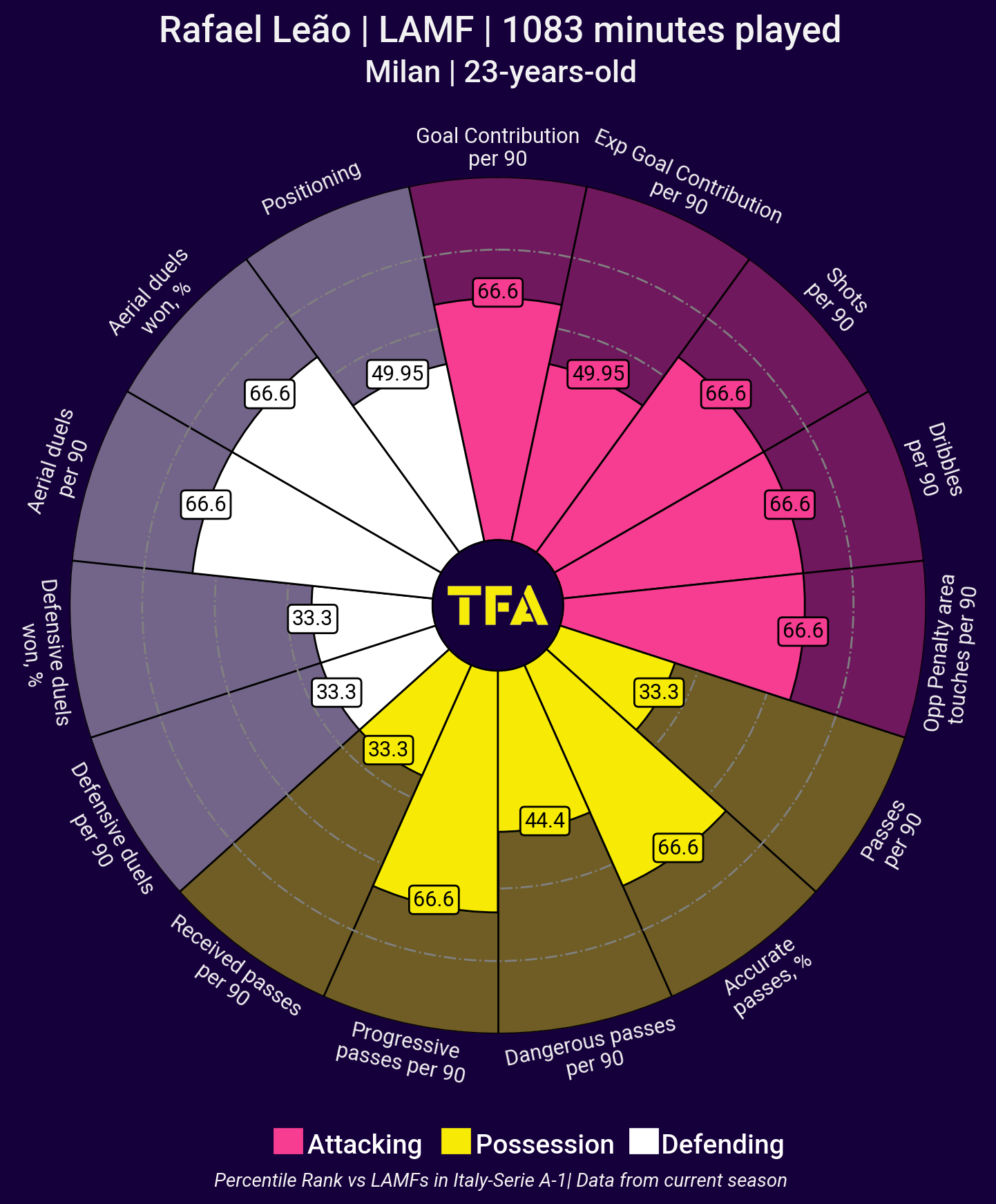 Rafael Leao has played 14 matches for AC Milan this season, starting 12 and coming on as a substitute in two matches. The Portuguese are having a stellar season and have seven goals and nine assists in all competitions. The above visual shows his percentile rank compared to other left-attacking midfielders in Serie A. We can observe from the pizza chart that he is ranked in the top 66.6 percentile for shots, dribbles, and entries into the opponent’s penalty area per 90 minutes. He has decent stats in all departments and could go on to become an excellent player with the right training. His passing records are also decent, being included in the top 66.6 percentile for accurate and progressive passes per 90 minutes. Another area where the 23-year-old does well is in aerial duels. 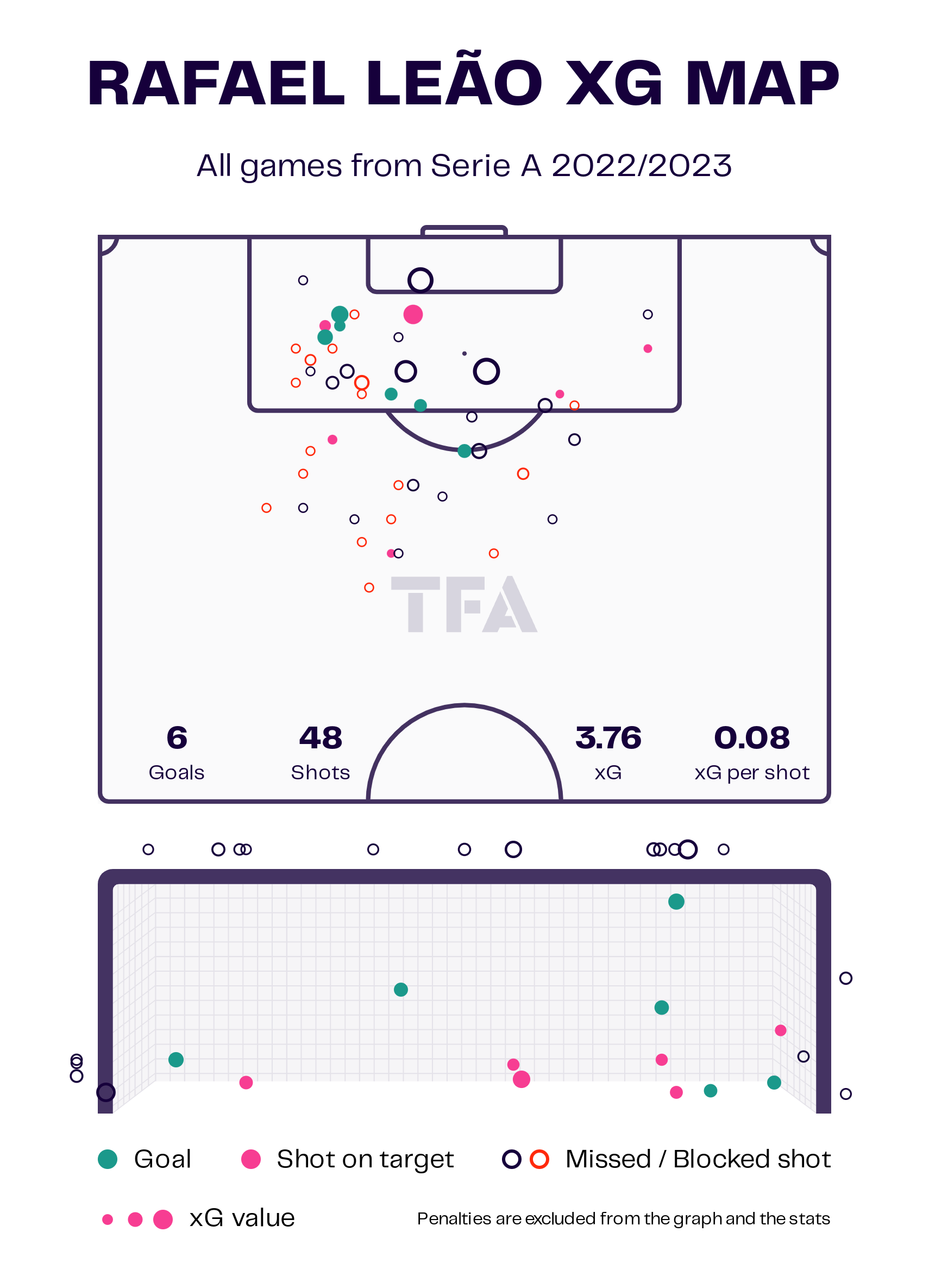 Rafael Leao is in brilliant scoring form and has been lethal in front of the goal. The Portuguese has racked up seven goals this season in all competitions. The above visual shows the xG map of Rafael Leao. He has attempted 48 shots this season in Serie A, with 27 coming from inside the penalty box. Moreover, Leao has attempted 14 shots on target, converting six of them. He takes an average of 3.35 shots per game with a 24.3% accuracy rate. He averages 0.43 goals per game and scored twice in the World Cup too. 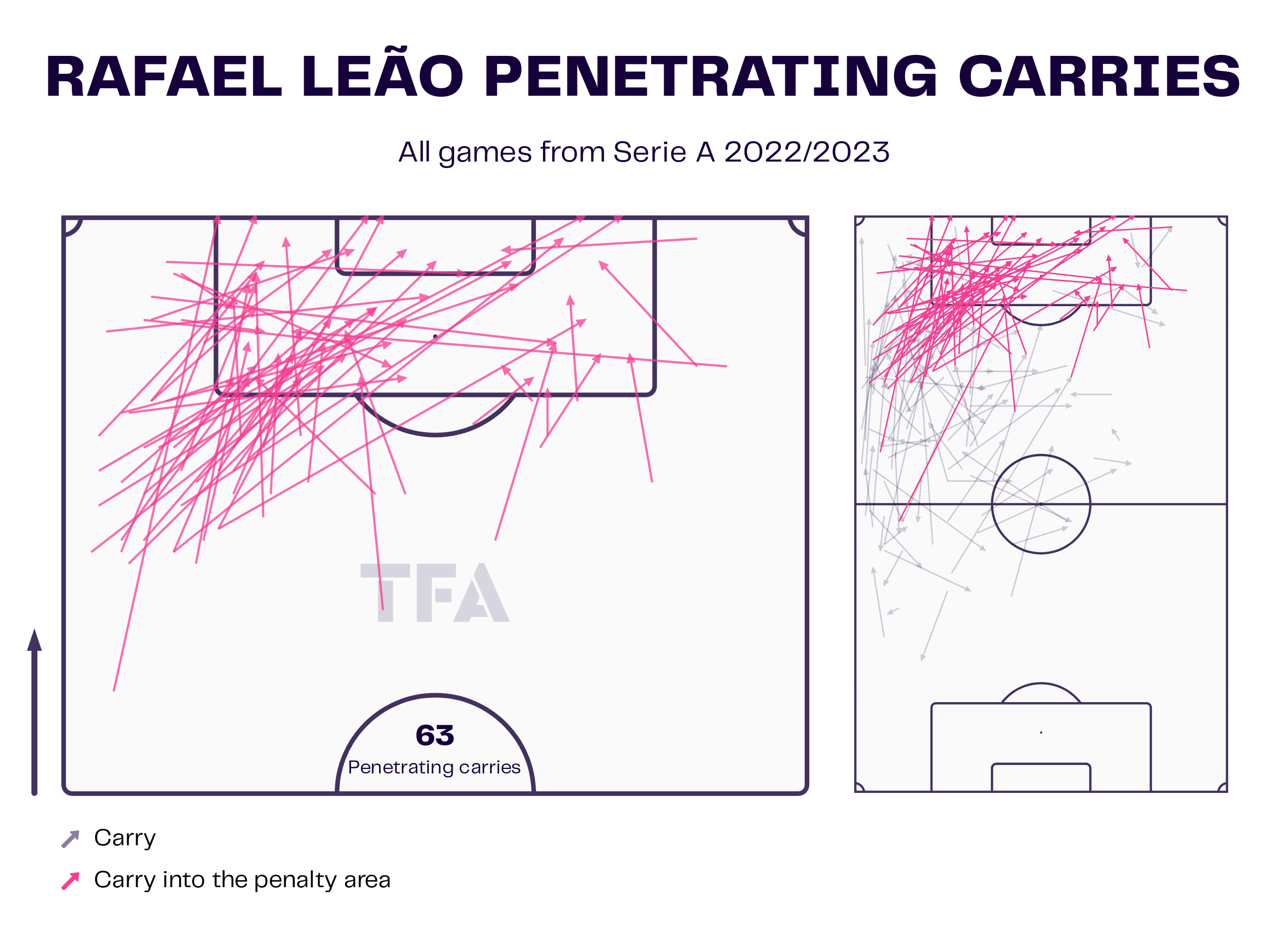 While dribbling, Leao is an unstoppable force. He penetrates the opponent’s defensive lines with pace and tricks and goes past players with ease. The above visual shows the penetrating carries made by Rafael Leao this season. He is showing no signs of stopping and makes an average of 10 dribbles per 90 minutes. He also takes on players 1v1 with his sleek footwork and takes part in around 16 offensive duels per game, coming out on top 46% of the time. Apart from the dribbles, Leao also makes around 4.46 progressive runs per game. These are frightening numbers that show how good the 23-year-old is. 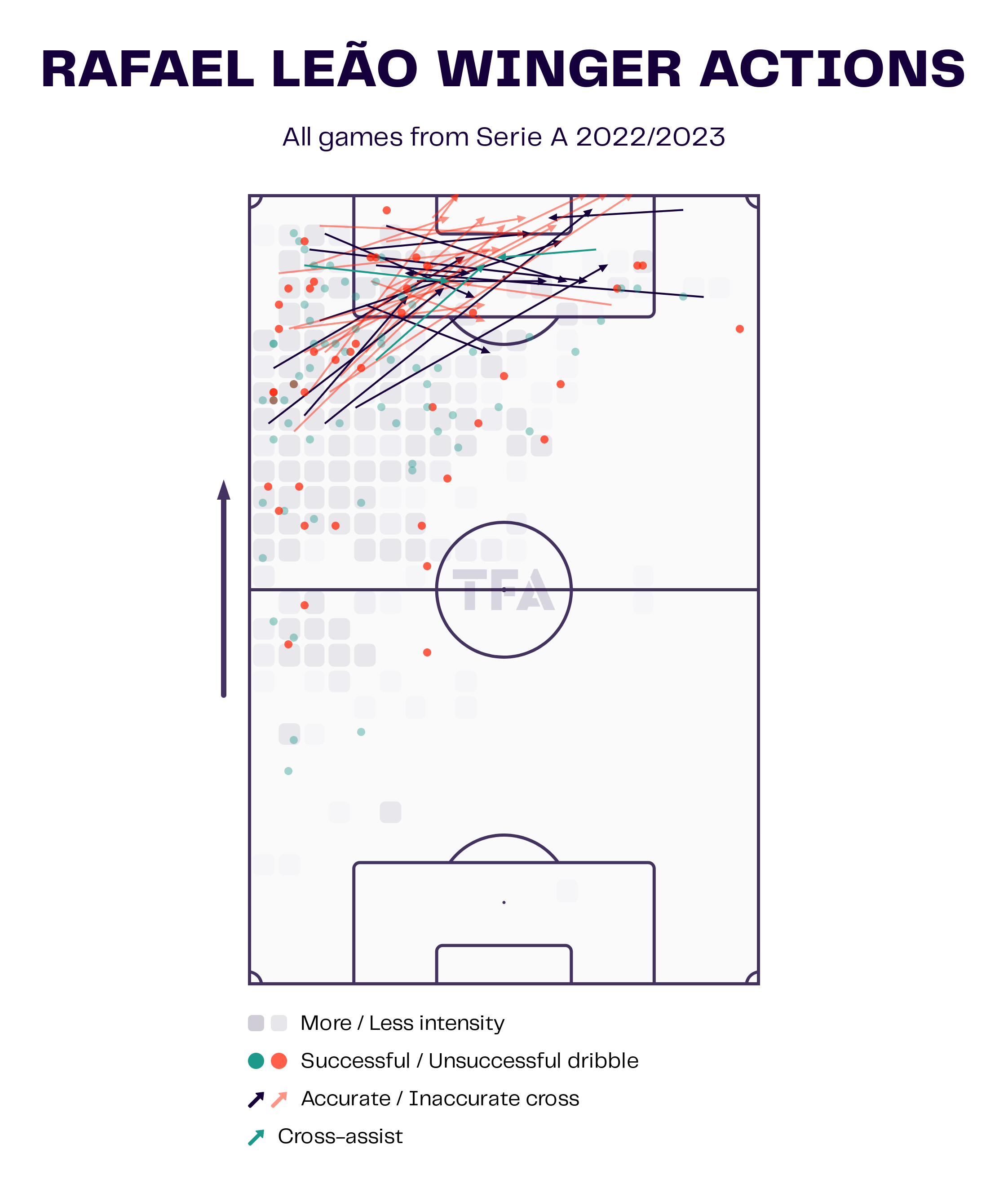 Rafael Leao usually plays either as a left-attacking midfielder or left winger. The Portuguese forward plays on the left flank and is a constant threat. Leao uses his pace and skills to dribble past defenders and challenges. The youngster sometimes whips in some crosses and sometimes gets into the box himself. He has an average of 5.22 touches in the penalty area. He is lethal in front of the goal and scores an average of 0.43 goals per game. Moreover, Rafael Leao also whips in around 3.45 crosses per game. The above visual shows the actions of Rafael Leao as a winger. We can see how he plays a lot of crosses into the box and therefore has nine assists across all competitions. 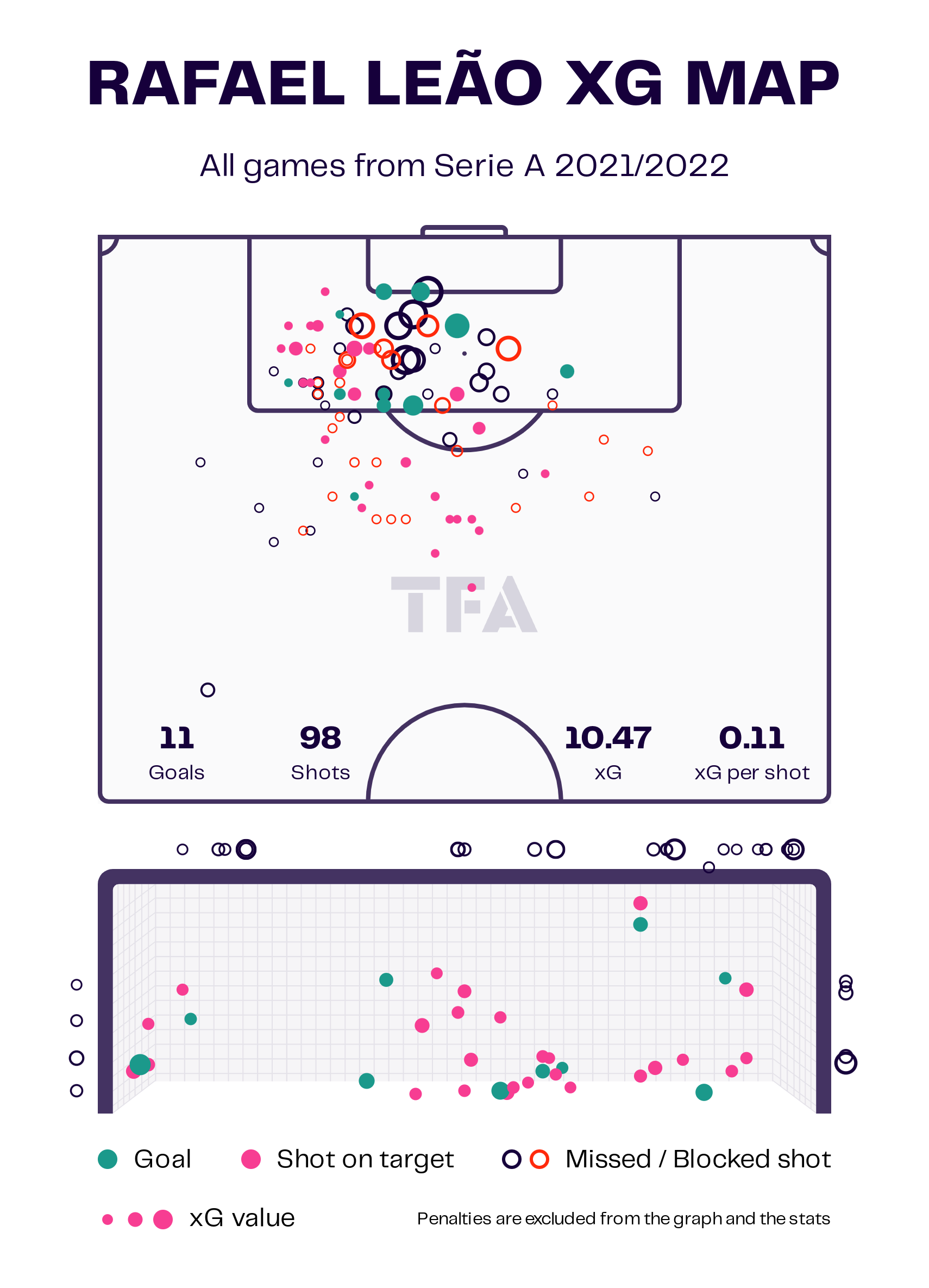 Last season, Rafael Leao scored 11 goals and had eight assists to his name. This season, he attempted 98 shots, compared to 36 last season to his name. He had an accumulated xG of 10.47, and he exceeded that xG and scored 11 goals. Leao averaged 2.79 shots per game last season. This season, this figure has gone up to 3.35 shots per game, and he has already scored and assisted half as much as he did last year. 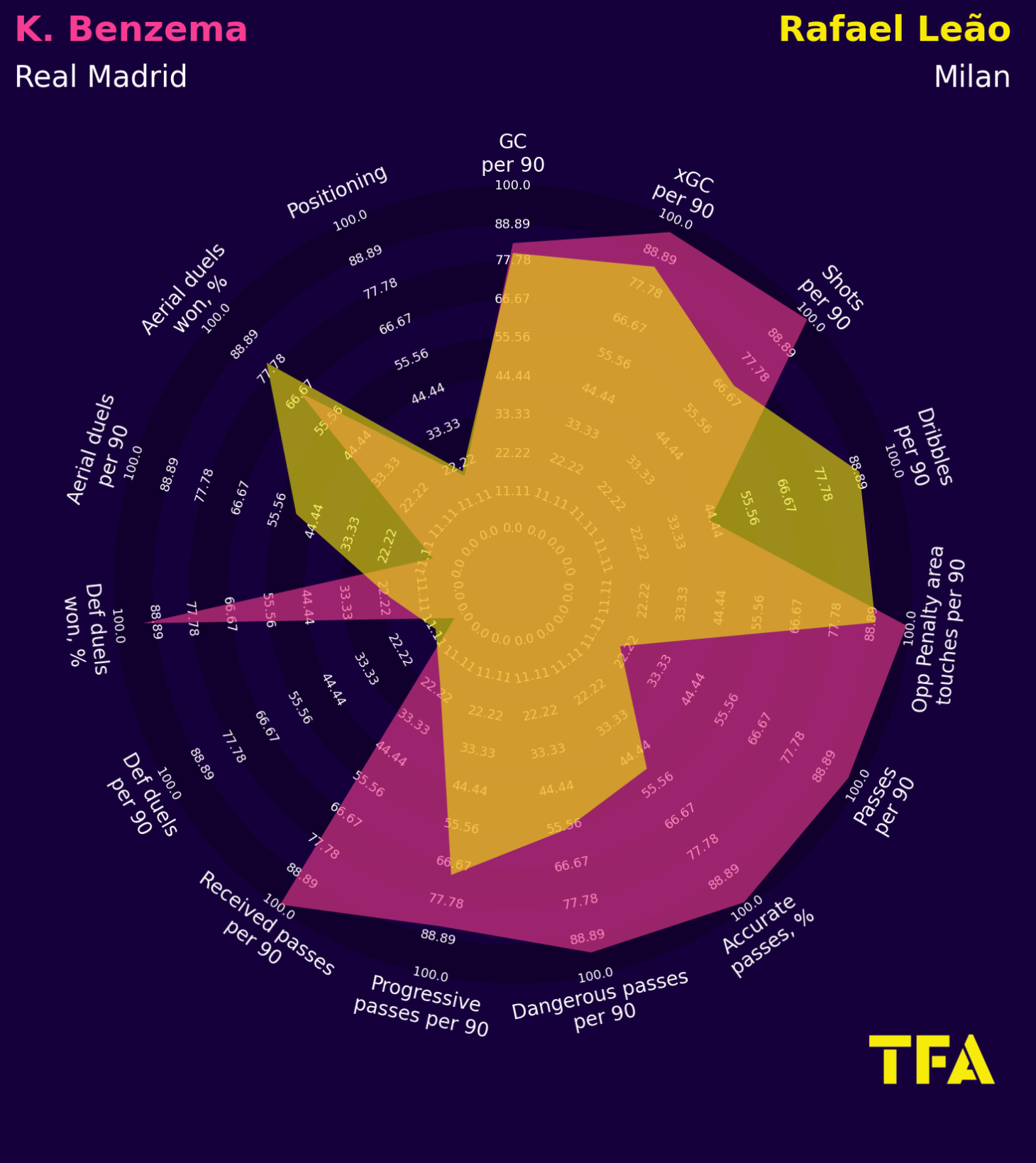 Replacing Karim Benzema won’t be an easy task for Real Madrid. His killer instinct and football intelligence are second to none and are irreplaceable. But Rafael Leao seems like a candidate who can potentially replace the French striker. Leao is in incredible form and has scored eight goals this season. Comparing the 23-year-old to Karim Benzema in itself doesn’t sound fair to Rafael Leao. But if we look at the comparison, we can observe how Rafael Leao can contribute differently to Real Madrid’s attack. Benzema has a better passing and shooting record and is way ahead of the youngster. But Leao’s ability to dribble past players and create danger out of nothing can help Real Madrid.

Rafael Leao has picked up right where he left off last season. He scored 11 goals last season and has scored eight halfway through this season. Whether the Portuguese will leave San Siro for a move to Madrid is still not clear, but if he does, Madrid would have gained an excellent player at the peak of his form.

Wolves want Gomez: How does he compare with Jota?

Decision time: Can Zidane afford to move this squad player on...