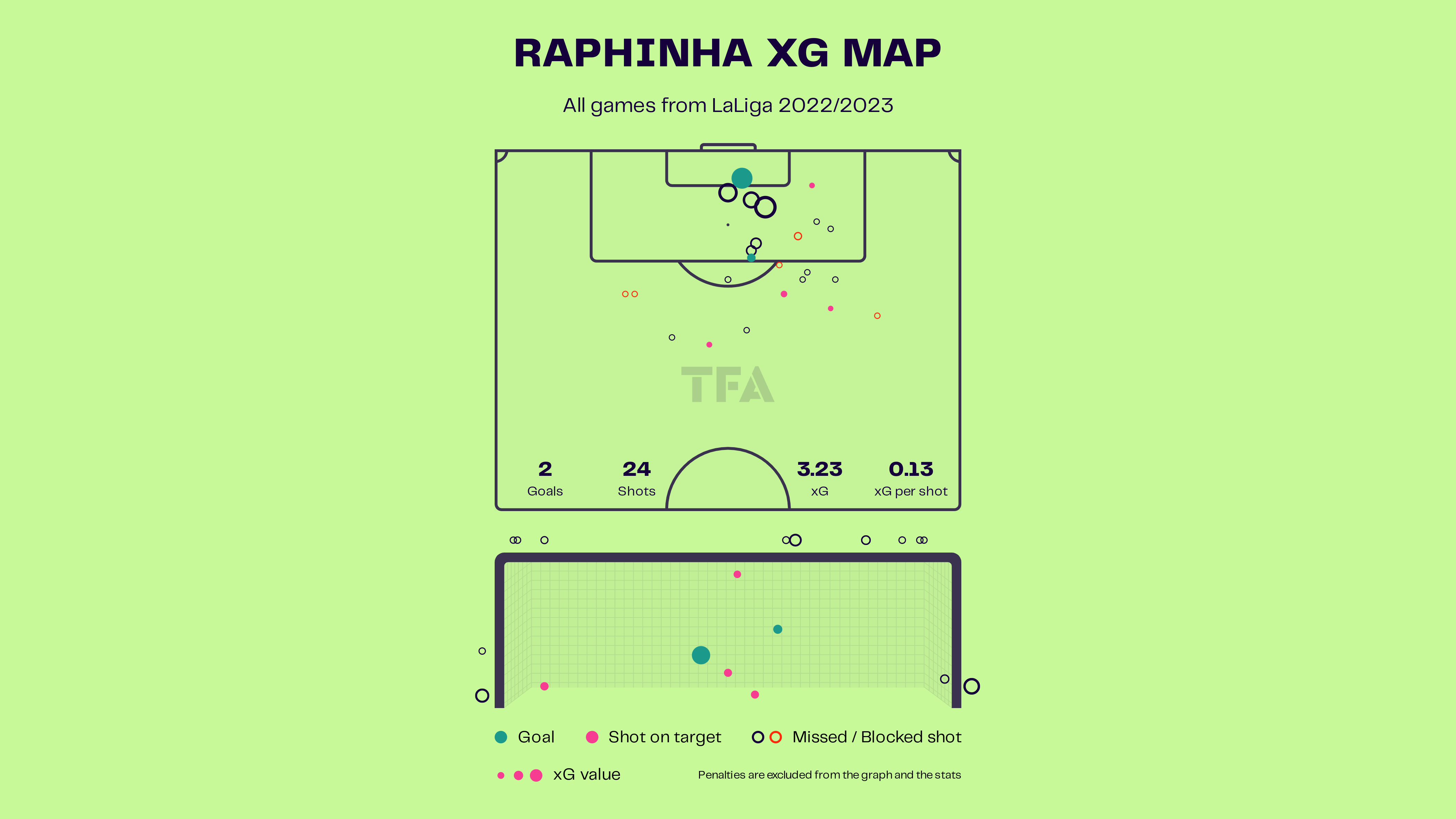 Barcelona battled with Chelsea and hijacked Raphinha from them in the last minute of the summer transfer window. But the samba steps haven’t quite fallen into place, as the Brazilian has yet to secure a permanent spot in Xavi’s squad. He was brought in from Leeds United this summer, where he had displayed fine skills on the flanks. He started almost all the matches at the start of the season, but as the season progressed, he found himself sitting on the bench more often than not. That raises the question of whether Barcelona is using Raphinha well or not.

We take a look at some stats to understand why Barcelona should use Raphinha better.

Raphinha has made 13 appearances in La Liga this season, starting six of them and coming off the bench in the rest. He has scored twice and has two assists to his name as well. 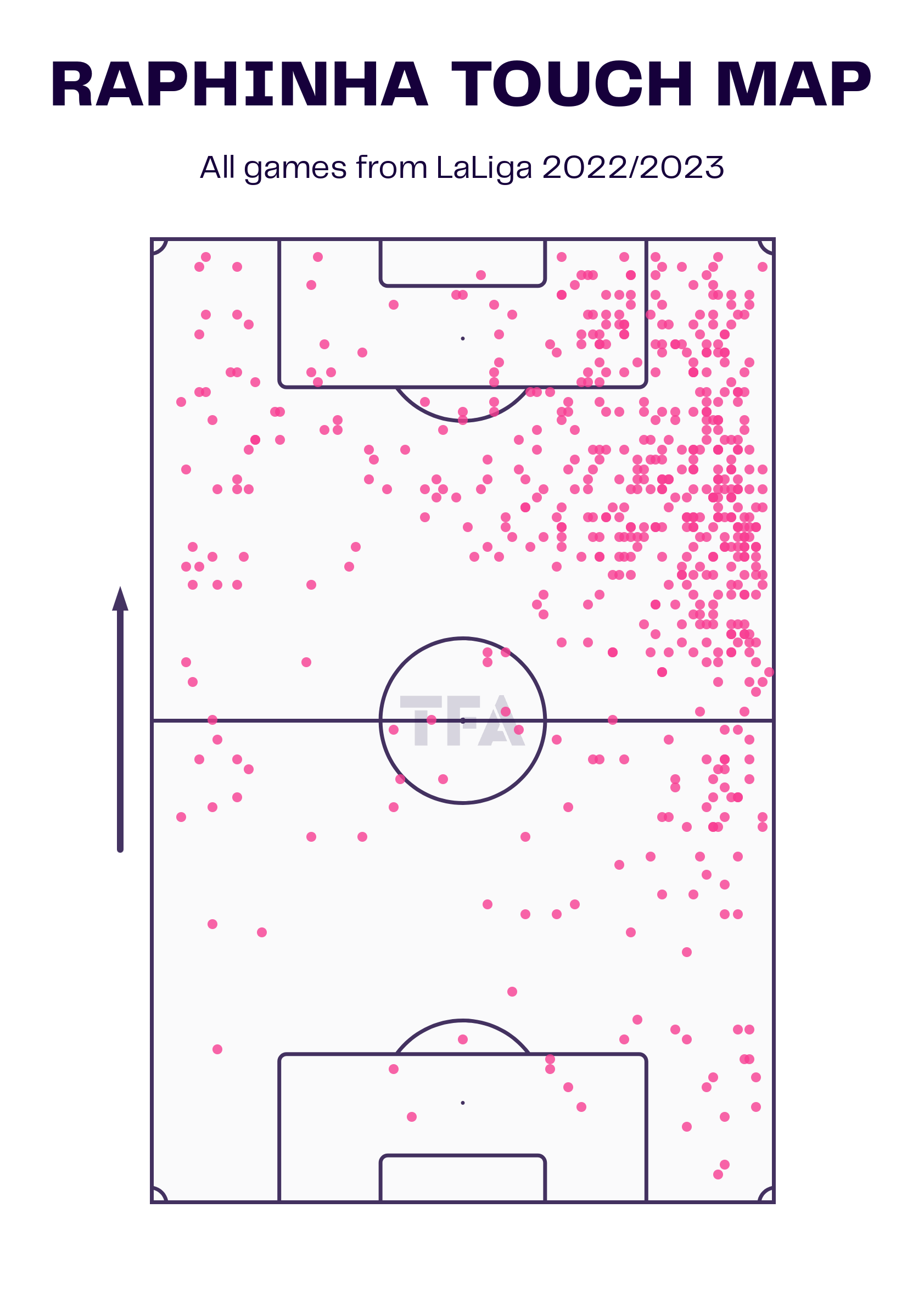 Raphinha usually plays as a right winger, but Xavi has also used him as a left winger when Dembele played on the right. The above viz shows the touch map of Raphinha for Barcelona this season. We can observe how he stays wide on the pitch to make use of the width. He makes around 5.5 touches in the opposition’s penalty area this year and wins 31% of the offensive duels as well. But this has come down from 42.8% success last year. Raphinha’s ability to go past players was one of the things that attracted Barcelona’s attention. Xavi needs to encourage Raphinha to do that more often. 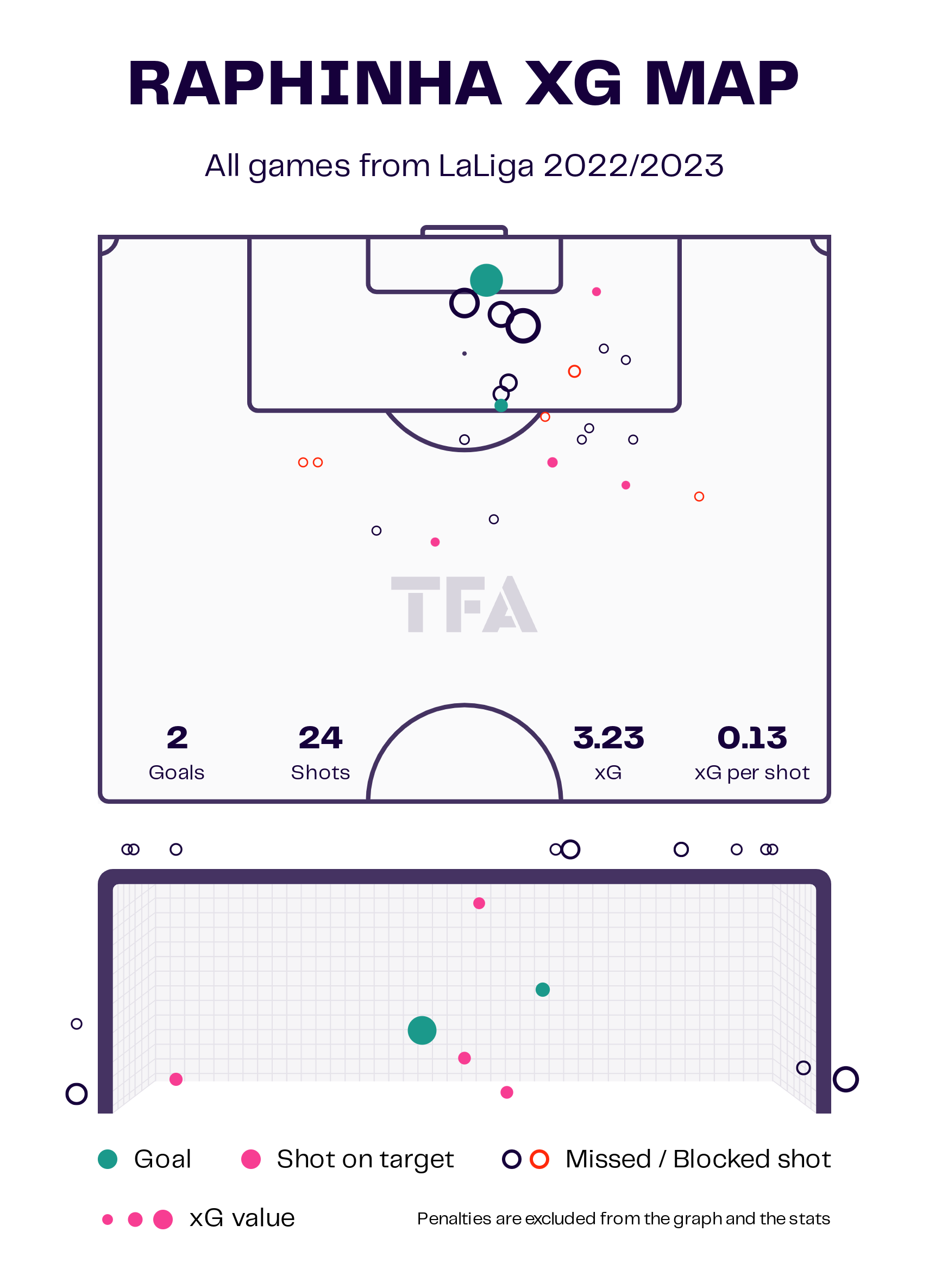 Raphinha has only scored two goals this season. He found the net in the last minutes of the match against Osasuna to give Barcelona a crucial win. His inverted run was also very important. The Brazilian has tried a total of 24 shots this season, with six on target. We can observe from the xG map how most of his shots are from the side, away from the goal. He is a player who usually combines well with the forwards and comes inside to try shots from a more central position. But he has stayed a lot wider this season. 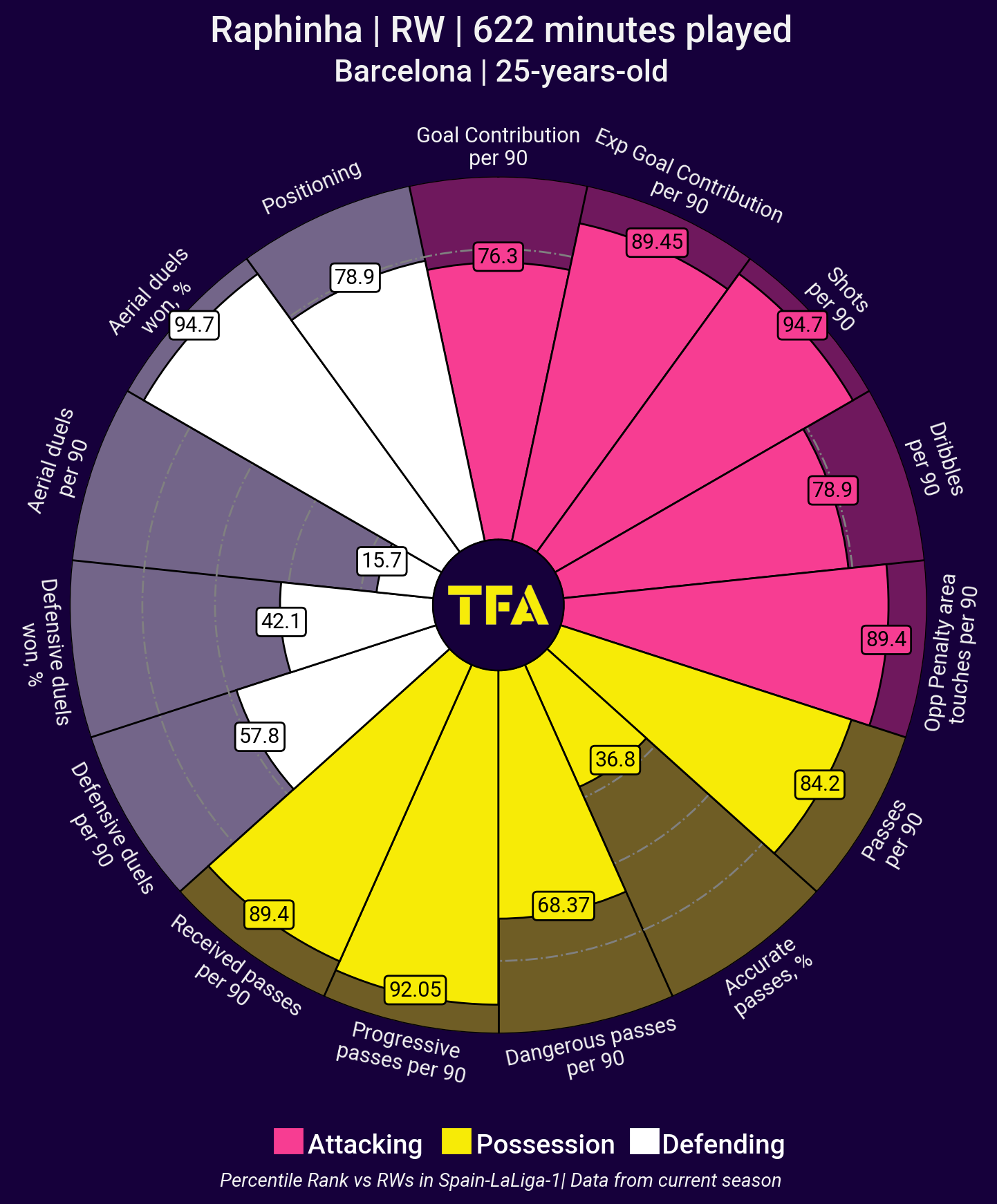 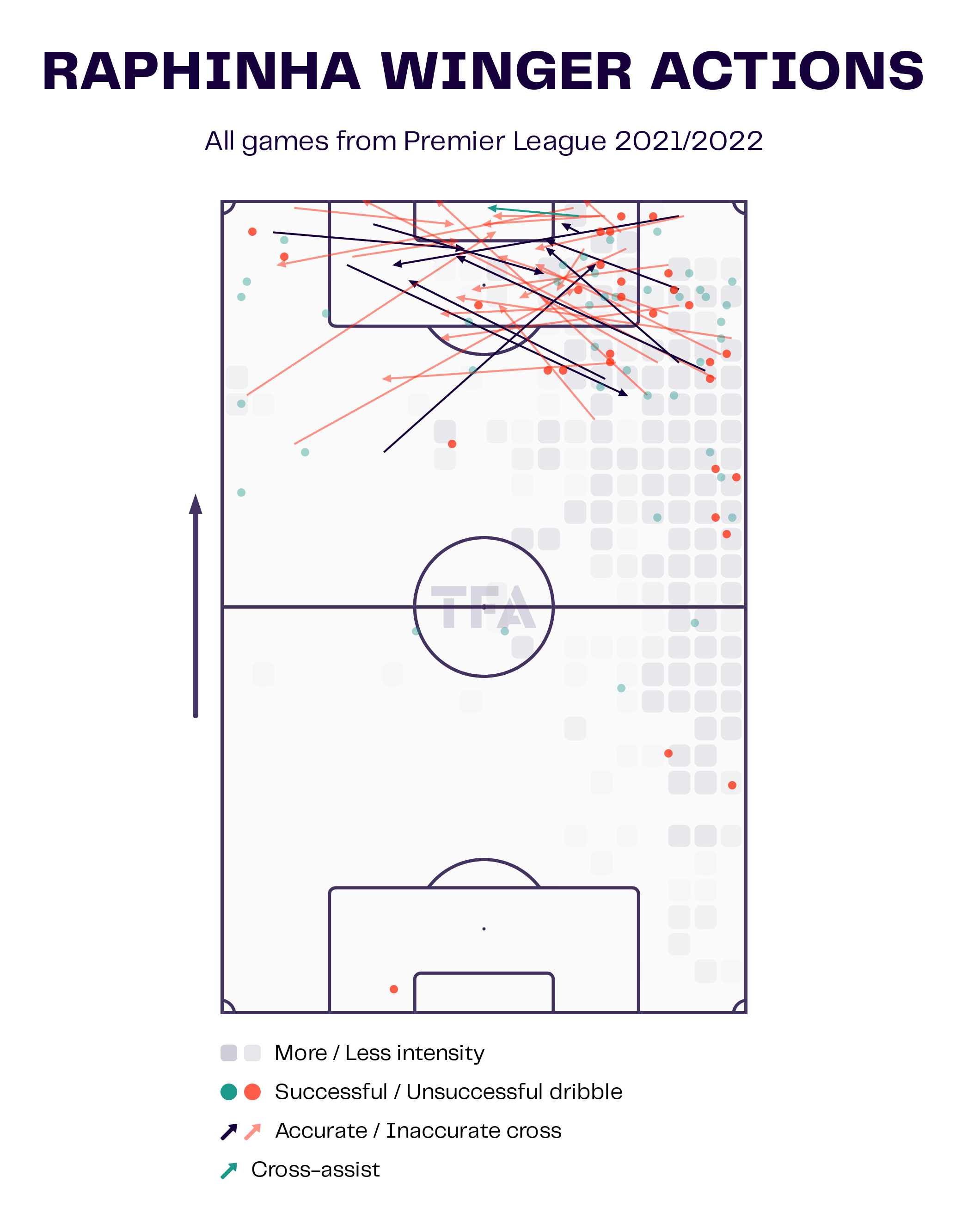 Xavi has preferred Dembele over Raphinha to play on the right wing, as both players are fighting for the same spot. While Dembele has been a constant threat on the flanks, Raphinha brings to the table some other qualities that the Frenchman lacks. His first touch and work rate are second to none, and he has the right decision-making skills as well. He whips in around 3.62 crosses per game with a 44% success rate. His crosses are fast, low, and almost always goal-threatening. 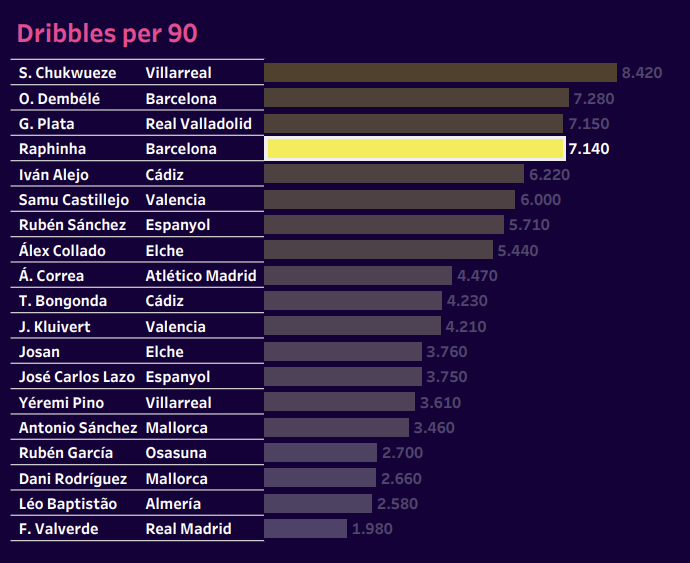 The above viz shows the dribbles per 90 minutes of right-wingers in La Liga. Raphinha has the fourth-best record and makes around 7.14 dribbles per game. He can cut in and go wide as well, and he uses both of these to effectively go past players. But ever since arriving in Barcelona, he seems to be hesitant to dribble, as the first thing that the Brazilian does is pass the ball. With a right back who can overlap, Raphinha can make some inverted runs and cut inside to occupy a more central role. This was crucial, as he provided the assist for Lewandowski in the dying minutes of the match against Valencia and the inverted run against Osasuna that gave Barcelona the winning goal.

Raphinha has all the ingredients for a successful career in Barcelona. His Brazilian flair and panache are much needed for the Catalan giants as well. However, Xavi seems to prefer Dembele over him at the moment. But the Frenchman’s consistent inconsistency will leave behind a space for Raphinha. If the Brazilian makes use of that space, it won’t be long before we see the number 22 jersey starting every game for Barcelona.

Analysis: Sevilla’s changes pay off as they defeat Espanyol

MSN2.0: Barcelona’s MSG connection coming together with “good days” ahead

‘Has been fantastic’- Why Barcelona have to consider this big change...