Much has been made over the sacking of Julen Lopetegui in recent weeks, with many blaming the departure of Cristiano Ronaldo as a reason as to why Real Madrid simply aren’t scoring as many goals. Obviously making up the 40+ goals Ronaldo brings per season isn’t easy, but there’s another significant difference that nobody else seems to have picked up on – the lack of set-piece goals from Madrid this season.

Set-pieces have made up a large number of Real Madrid’s goals in recent seasons as the below picture demonstrates (data from whoscored.com):

Obviously, it’s early days in the season, but I can’t help that feel Lopetegui potentially could have still been in a job if he’d kept a similar sort of ratio (that would have potentially bought an extra 3 or 4 goals to the team) that Madrid had seen in seasons past. Let’s look at Real Madrid’s set-pieces last season, the 20 goals they scored can be broken down into the following categories:

So with corners making up a large majority of the set-piece goals, I’ll focus on them and compare the corners in the last 3 La Liga games under Zinedine Zidane against the first 3 league games under Julen Lopetegui and hopefully understand why Real Madrid simply haven’t been effective from set-pieces this season.

Interestingly every corner Real Madrid had in the game was on the same side, and there are quite a few constants which makes it relatively easy to analyse at a quick glance. Kroos is always the taker (outswinger) with 5 players used at the beginning of the game, which drops to 4 when Madrid have a comfortable lead (and rises back to 6 in the last minute of the game with the game tied). The runs are interesting and look to overload a certain area, with a majority of players all making runs to the same area, however, don’t look to be towards pre-planned areas – instead just following the likely route of the ball.

Much like the Villarreal game, Real Madrid take an early lead, however still keep stick with 5 players in the box, dropping to 4 when leading 3-0 and finally ending with just the single player (with Varane and Nacho making half-hearted attacking runs) in the area in the final minute of the match when winning 6-0. Again, the attacking runs all seem to focus on one specific area for each corner with Varane, Casemiro, Bale and Benzema all providing the attacking threat. 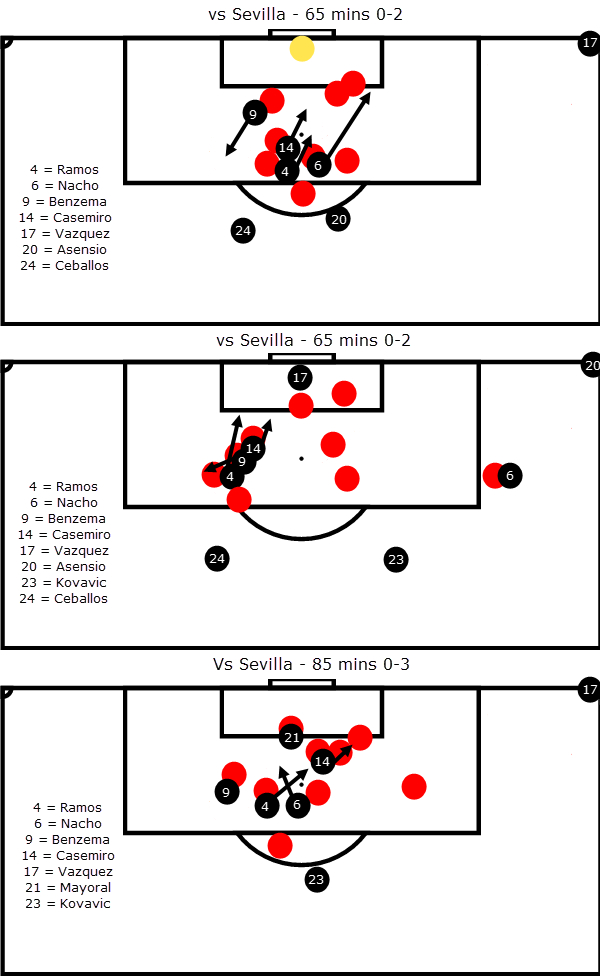 An interesting this one – Madrid deploy some quite specialist set-piece tactics in this game which definitely indicates a fair amount of work going into them. Benzema in the first 2 corners for instance actually makes his run away from the ball, dragging his marker out of the danger area – freeing up more space for his teammates to attack. In the second corner, this is used in conjunction with another advanced move that a lot of don’t yet use – screening or blocking. Whilst Benzema makes his run out of the danger area, Casemiro attempts to screen the player marking Ramos – which if successful will give Ramos a free run. It semi-works, with Casemiro making his own attacking run as well. The ball falls to Ramos on the edge of the 6-yard area but he shoots over – showing the effectiveness of employing such techniques. 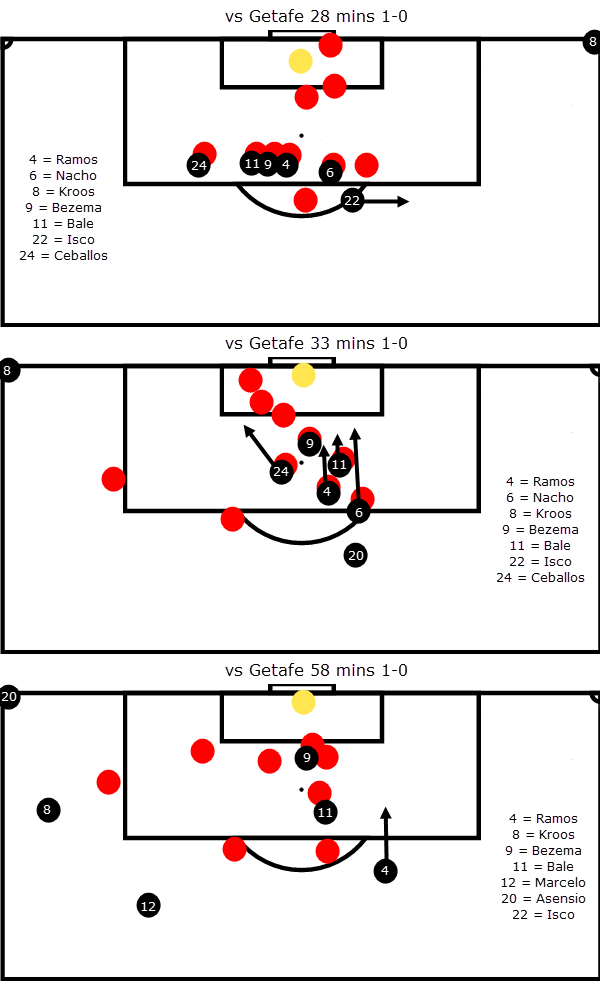 Whilst 3 corners isn’t a particularly big number to look at, some problems make themselves obvious straight away. For the first corner, the players begin to make their runs, before Kroos plays the short corner to Isco. With the corner played short, the players stop their runs, before beginning them after another exchange of passes between Kroos and Isco – when the ball is finally played in, the players are all static, with no movement or momentum on their side. The last corner is taken short and quickly – before the likes of Ramos etc have even reached the box and results in Real losing the ball before it can be crossed in – much to the annoyance of Ramos who lifts his arms up in frustration.

Plenty of short corners used here and the balls that are played into the box are a bit underwhelming. The movement and runs are a bit haphazard, there seems to be little purpose behind the runs and the players seem to be disrupted by the number of short corners taken – they’re not sure whether to begin their run or whether the corner will be taken short. The short corners are also taken very quickly, often before the like of Ramos etc have made it to the penalty area which will certainly disrupt the attacking organisation.

Again the movement is a bit hesitant, players repeatedly stop/starting their runs which will affect the momentum. Kroos, when he plays the ball in (rather than taking it short), looks to be aiming for the near corner of the 6-yard area (and I’d certainly trust his delivery!), but on all but one occasion, there’s no Madrid player near.

Below I’ve made heatmaps looking at where the ball lands or where the first touch occurs (for either Madrid or the defending team) for the games previously looked at. Weirdly the 3 games I picked for the 17/18 season, all of the corners Madrid had were down one side, but it’s easy to see a difference in the delivery in the 3 pictures below: 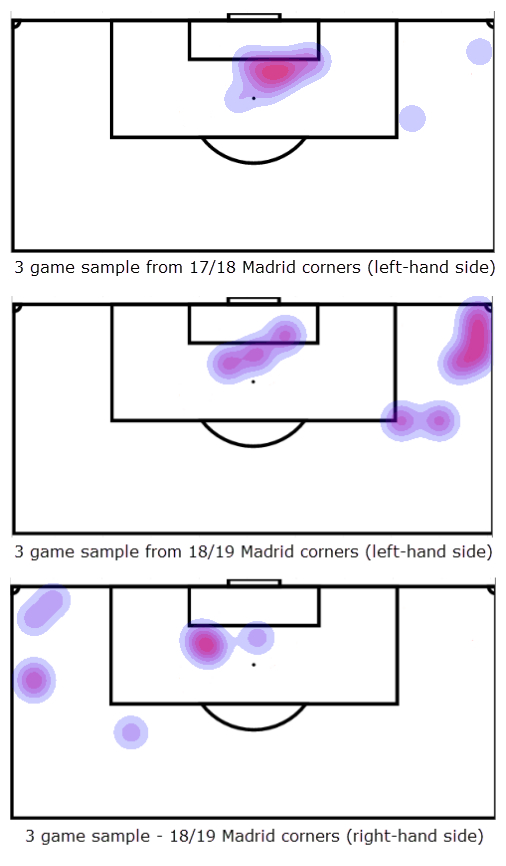 Before Kroos outswingers were aimed between the near side corner and the middle of the 6-yard area, whereas under Lopetegui a majority of corners are taken short – 6 out of the 9 corners taken from the left-hand side in the sample were taken short instead of being played into the area. Whilst this may decrease the number of goals scored, it’s definitely in keeping with Lopetegui’s possession-based philosophy. The sample size sample of games looked at is also pretty small, although I’d still be willing to bet that a majority of Real’s corners this season have been taken short instead of played into the box, which will, of course, have an effect on the number of corners scored.

It’s pretty obvious that the (seemingly insistence of short corners has definitely hindered Real Madrid’s set-piece efforts this season, I could understand if Lopetegui felt his team could create more chances by simply retaining possession with short corners, but in a majority of the cases looked at, the ball was played back into midfield before being launched into the box anyway. This, in turn, leads to disorganisation in the attack, with lack of movement and momentum that will certainly affect the set-piece output.

With Lopetegui now dismissed, it’ll be interesting to see if Santiago Solari will revert to the previous set-piece regimes that served previous Madrid managers so well – and indeed the early signs are positive – with Madrid scoring 2 goals from corners against Viktoria Plzen in the Champions League this week

Transfer Analysis: Why Barcelona are looking for a shocking move for the arch-rival star

Zidane may need to revert to go forward

The Data: Real Betis draw at home to Cadiz

Inside the career of Athletic Club’s Aritz Aduriz