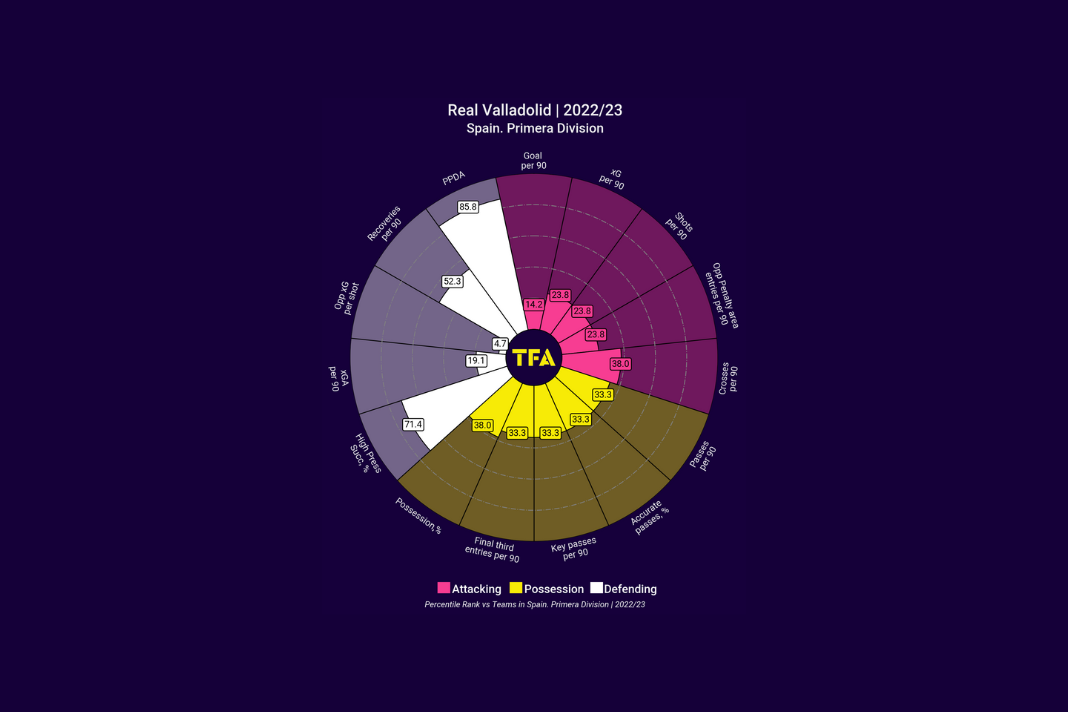 Real Valladolid started the current La Liga season on a good note, but their recent form is making things a little complicated for them. They have won five matches, drawn two, and lost ten matches this season. In addition, they have lost their last four matches. This dip in form could prove to be dangerous for them, as they are currently placed in the 17th position, one position above the relegation zone. Therefore, we look at Valladolid’s stats to understand how their current form could pave their way out of La Liga. 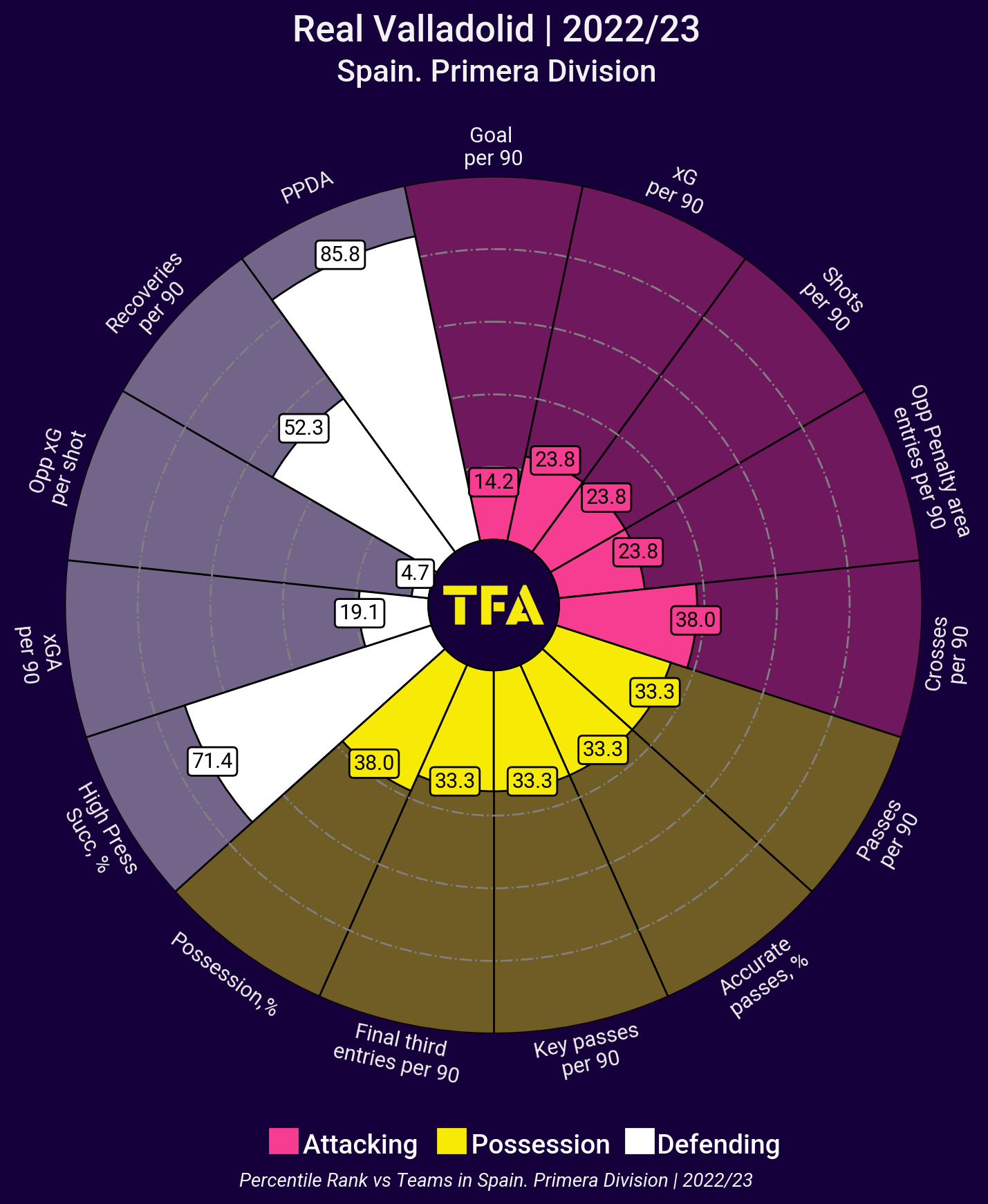 The above visual shows Real Valladolid’s percentile rank compared to other teams in La Liga. They have decent stats in some metrics while being ranked below average in others. Valladolid is ranked in the top 71.4% for high press success. Moreover, they are ranked in the top 52.6 percentile for recoveries per game. They are ranked below average for passing and attacking, and that has hurt them this season. 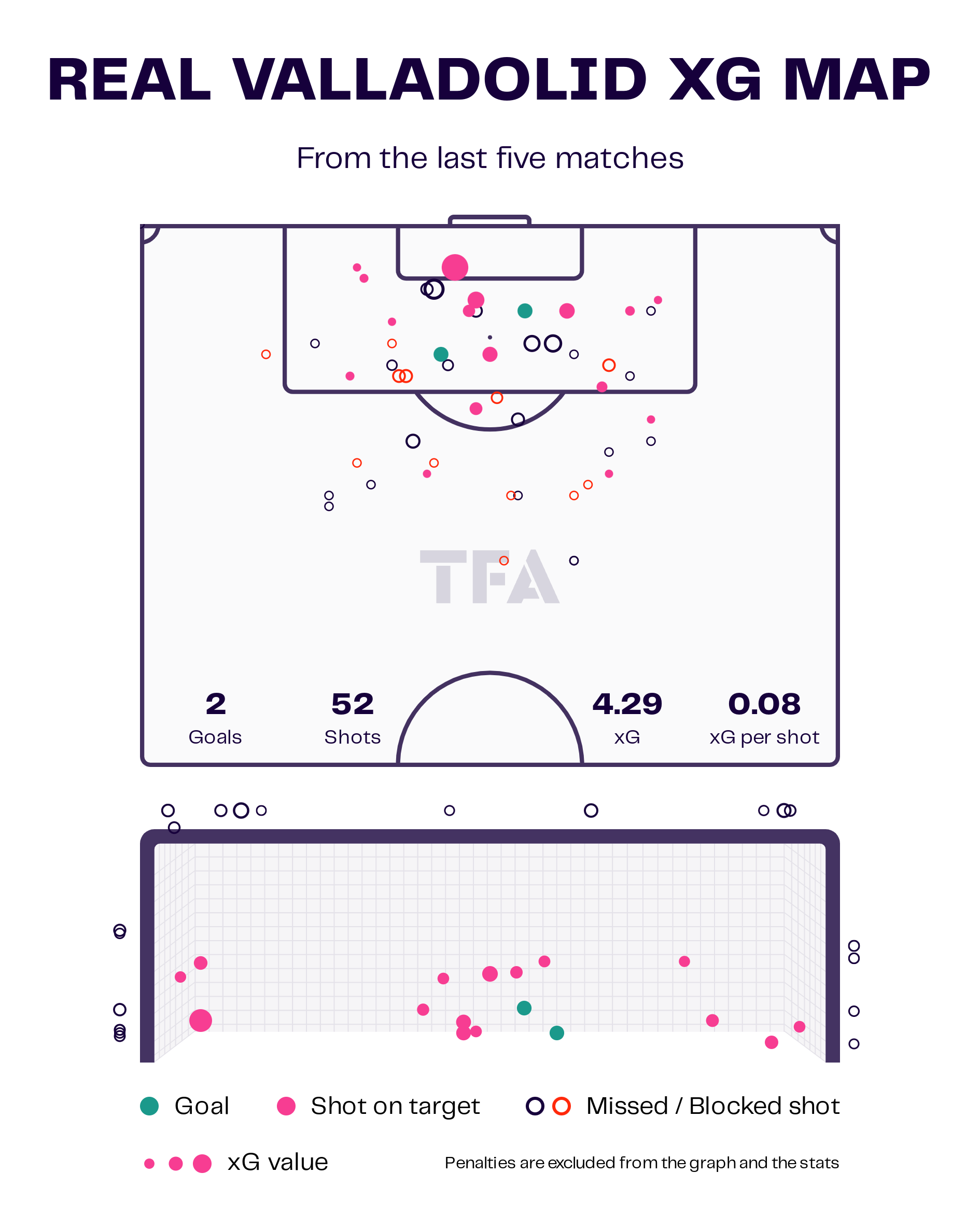 The above visual shows Real Valladolid’s shots from the match against Athletic Bilbao, which they lost 3-0. They took seven shots in that match, none of them on target. In the last five matches, they have tried a total of 52 shots with an average of 10.4 shots per game. This figure has come down slightly from their season average of 10.88 shots per game. 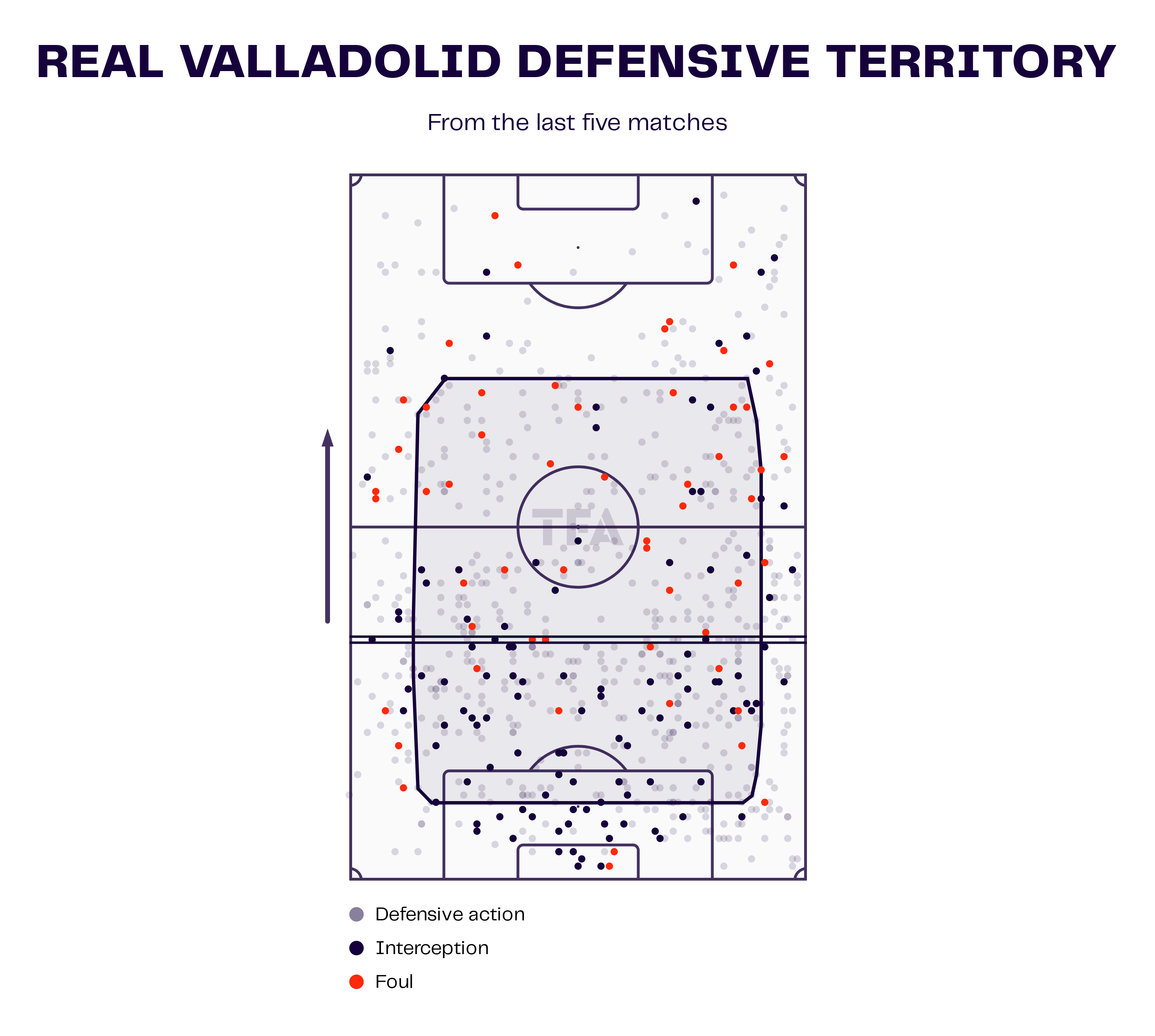 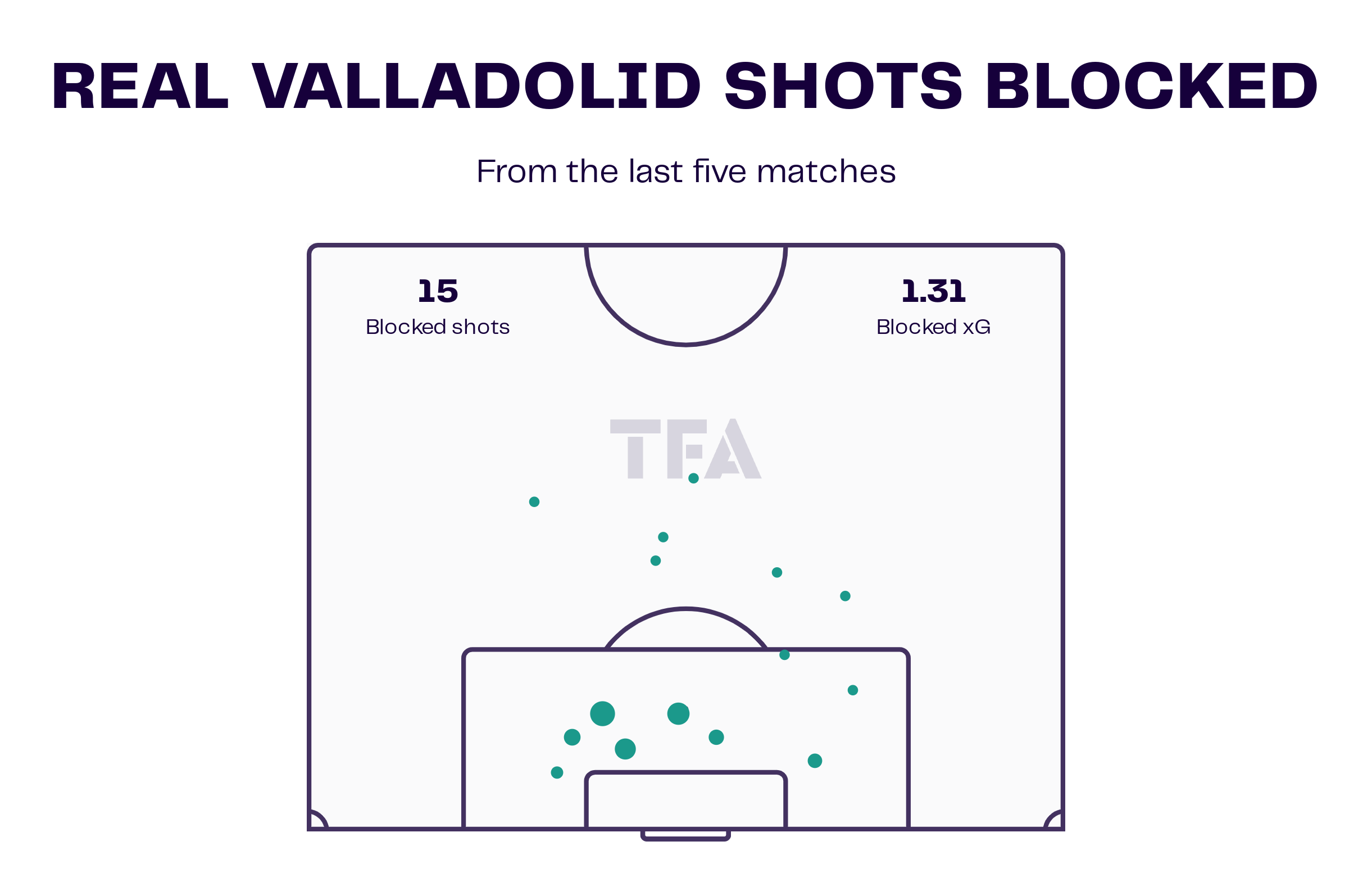 The second visual shows the shots blocked by Real Valladolid players in the last five matches. They have blocked 15 shots and saved an expected goal rate of 1.31 goals. The positions of the shots indicate that the opposition found it easy to get into goal-scoring positions and took their shot, which does not flatter their defence. 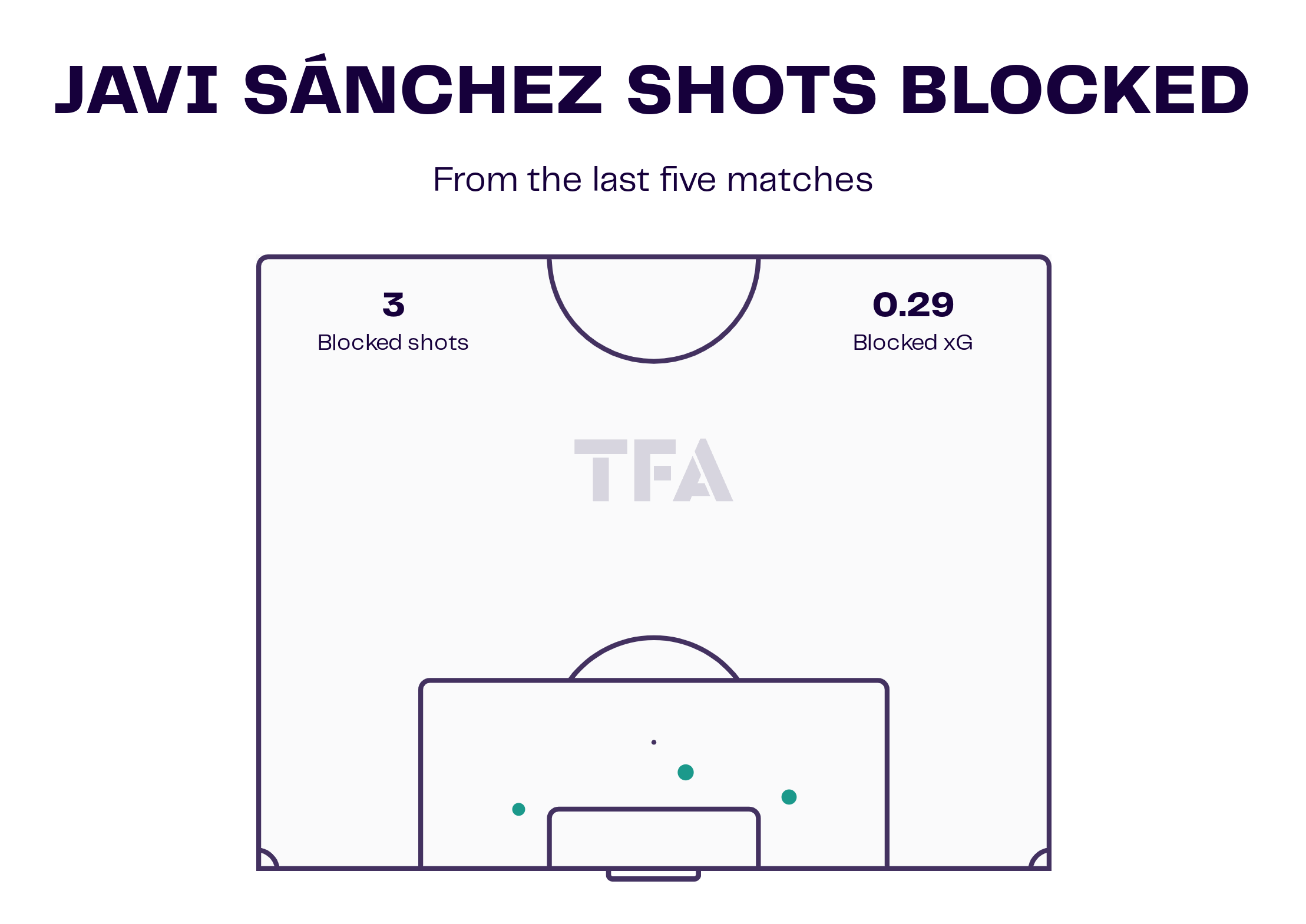 With over 75 pass interceptions this season, Javi Sanchez has been Valladolid’s best defender. But even he couldn’t save Valladolid from collapsing, as they have conceded eight goals in the last five matches. Javi Sanchez has blocked three shots in the last five matches, all three of which were very important blocks. He will be looking to solidify the Valladolid backline in the upcoming matches.

The odds for them at the 1×2 market would have gone higher given their current form, and the overlines are expected to thrive, even if only a little, considering that they have not been able to stop the opposition from scoring.

Real Valladolid’s season will end in dismay if they don’t act now. Right now, they are in a position where they have their fate in their own hands. They would hate to be in a position where there is no way out of relegation. Therefore, the coach and the players will be looking to find motivation somewhere to turn their fortunes around.