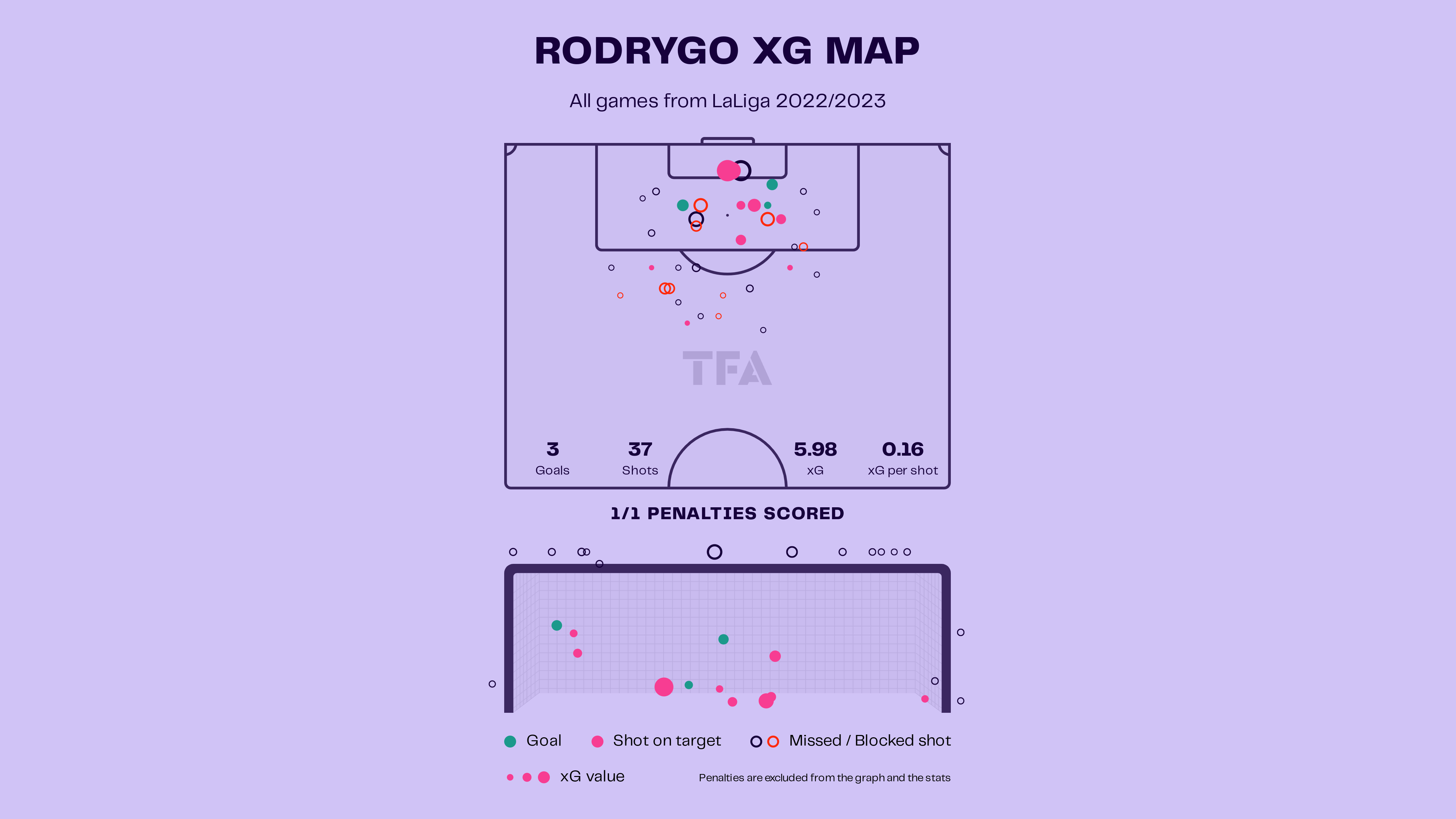 Real Madrid have a bunch of talented youngsters in their squad, and one of the brightest talents is the 21-year-old Rodrygo. The Brazilian was crucial for them last season and scored some important goals after coming on as a substitute. His brace against Manchester City in the Champions League was one of the best cameos in the competition. The youngster is quick, has good dribbling skills, and has an uncanny ability to find goals out of nowhere. A player of such quality cannot be left on the bench for too long, and it was only inevitable that Rodrygo made his way into the starting lineup. So, we look at some of his stats to understand his stellar performance for the Los Blancos.

Rodrygo has made 12 appearances this season in La Liga, starting ten and coming off the bench in two. He has scored four goals and has four assists to his name as well. In addition, he has three goals in the Champions League too. 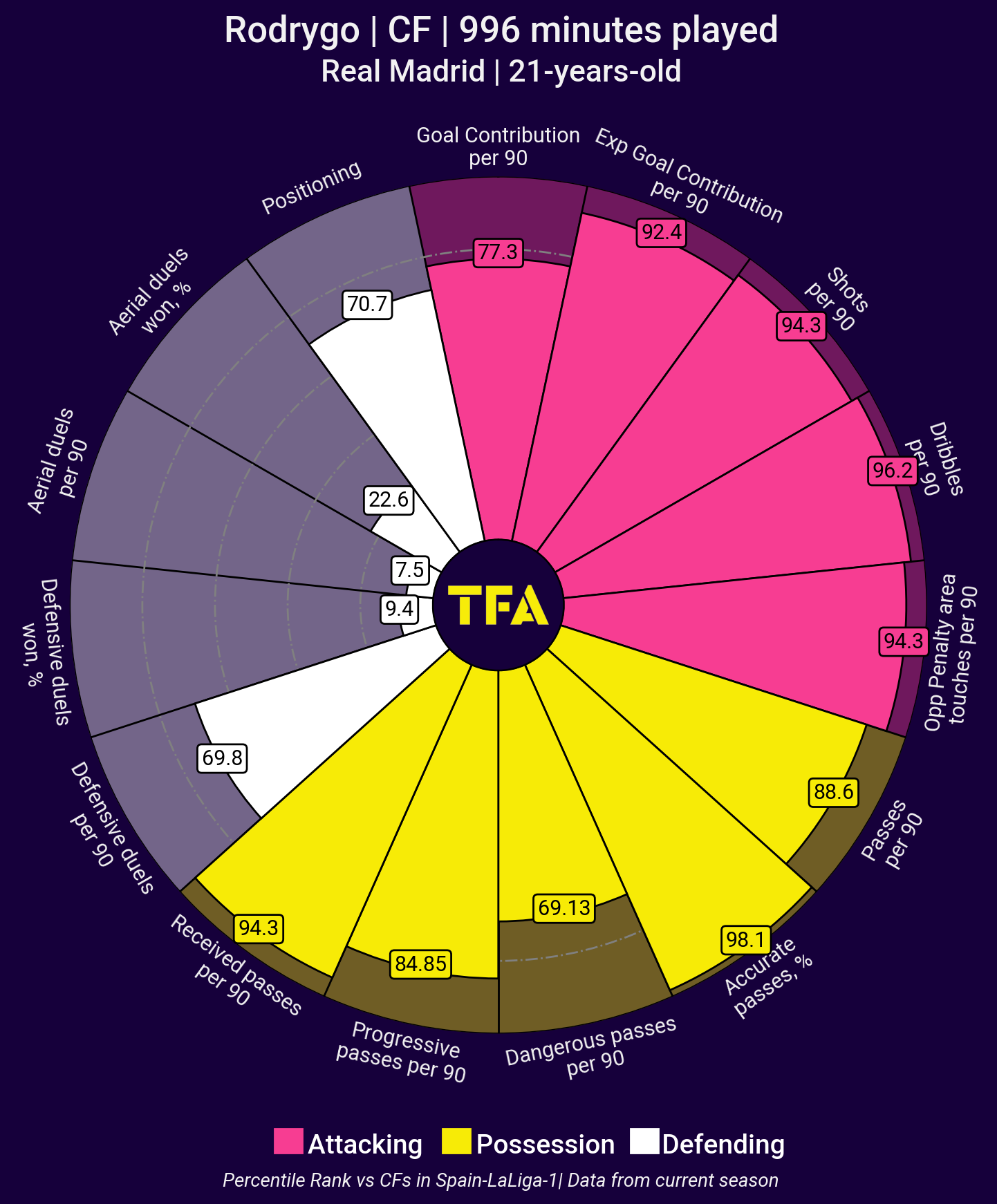 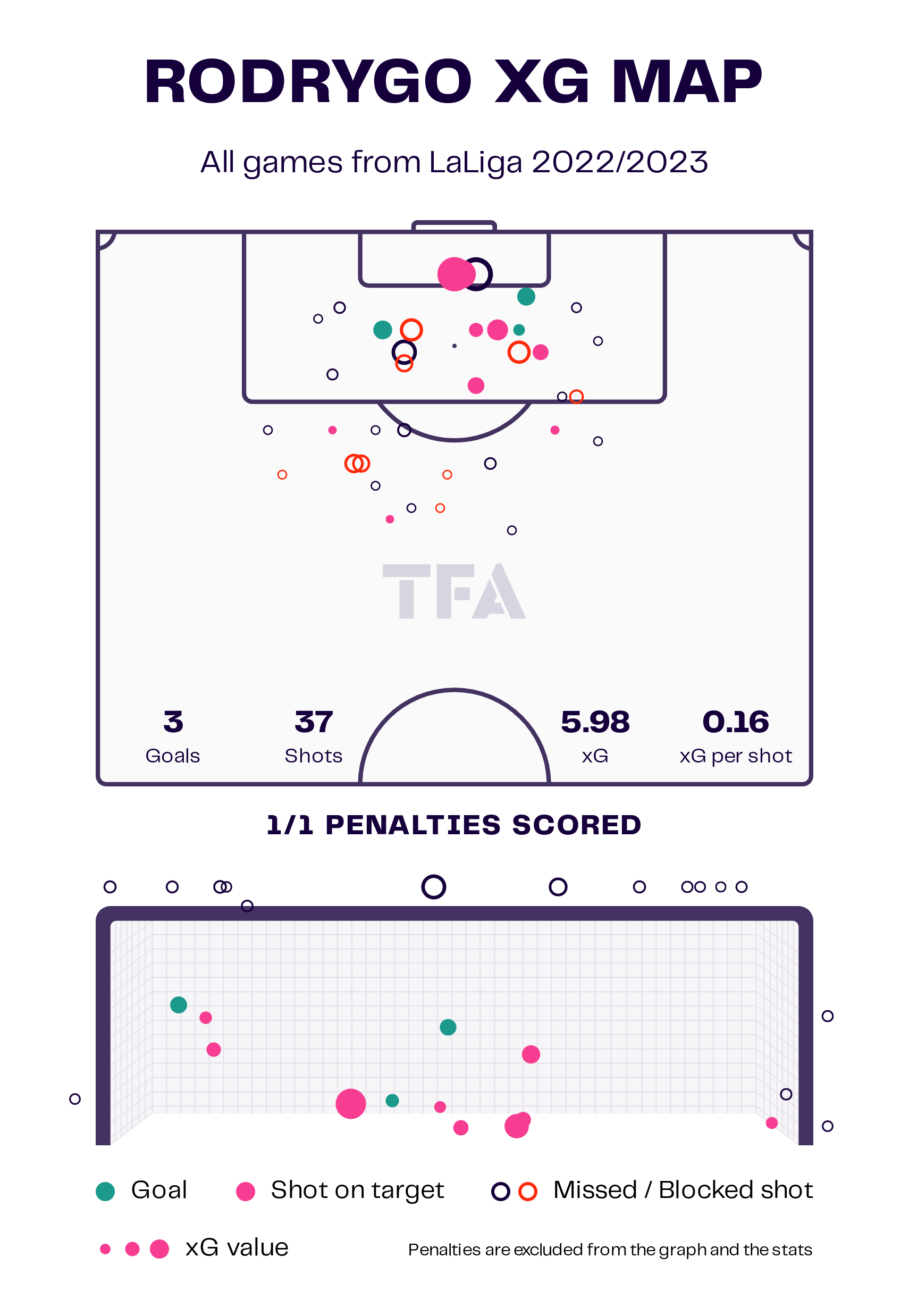 Rodrygo has scored four goals in La Liga this season, with three from open play and one from a spot kick. He attempted a total of 37 shots, with 21 shots coming from inside the penalty box and 13 shots on target. He is a big-game player and has scored some of the biggest goals for Real Madrid in their recent history. Rodrygo has attempted an average of 3.43 shots per game, with 34.2% of them on target for an average of 0.34 goals per game. Moreover, he also has three goals in the UEFA Champions League this season. 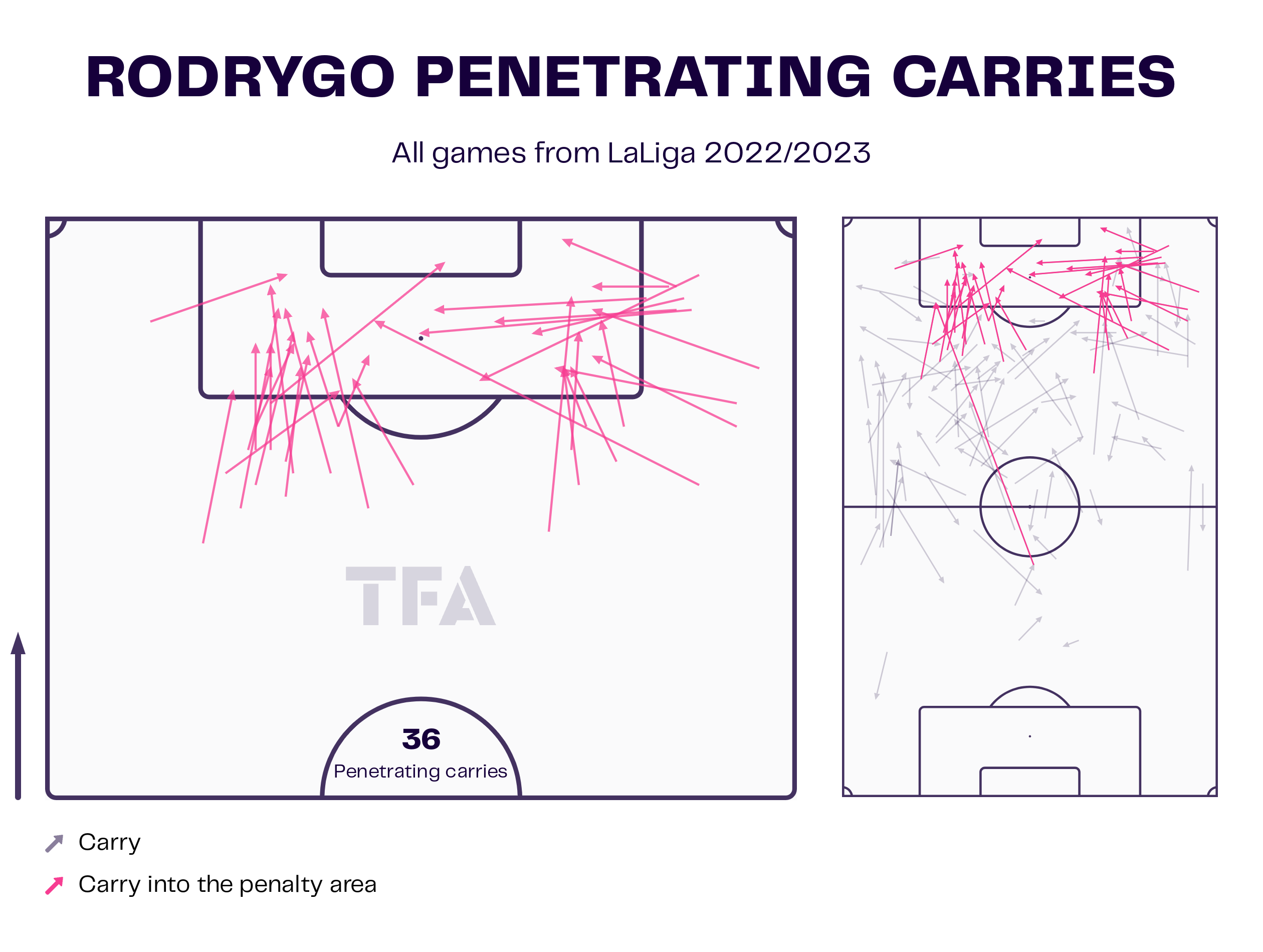 Apart from scoring goals, Rodrygo is an excellent dribbler too. The above visual shows the penetrating carries made by Rodrygo this season. He makes an average of 5.78 dribbles per game with a success rate of 59.4%. Rodrygo is a fast player and is instrumental in counter-attacks. We can observe from the visual the types of carries he has made this season. He has played both as a centre-forward and as a winger this season and likes to cut inside while dribbling. The youngster also makes around 3.07 progressive runs per game. 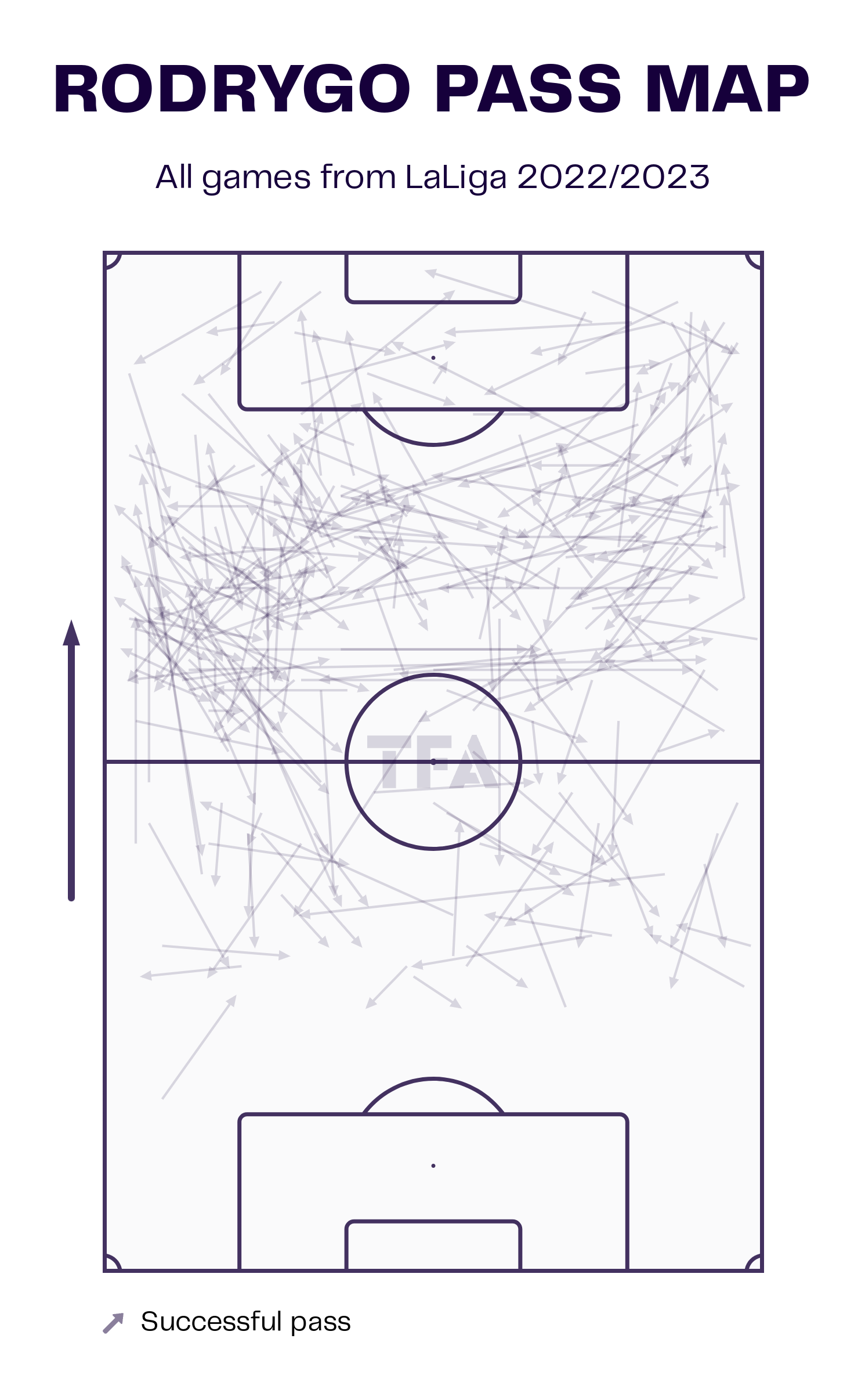 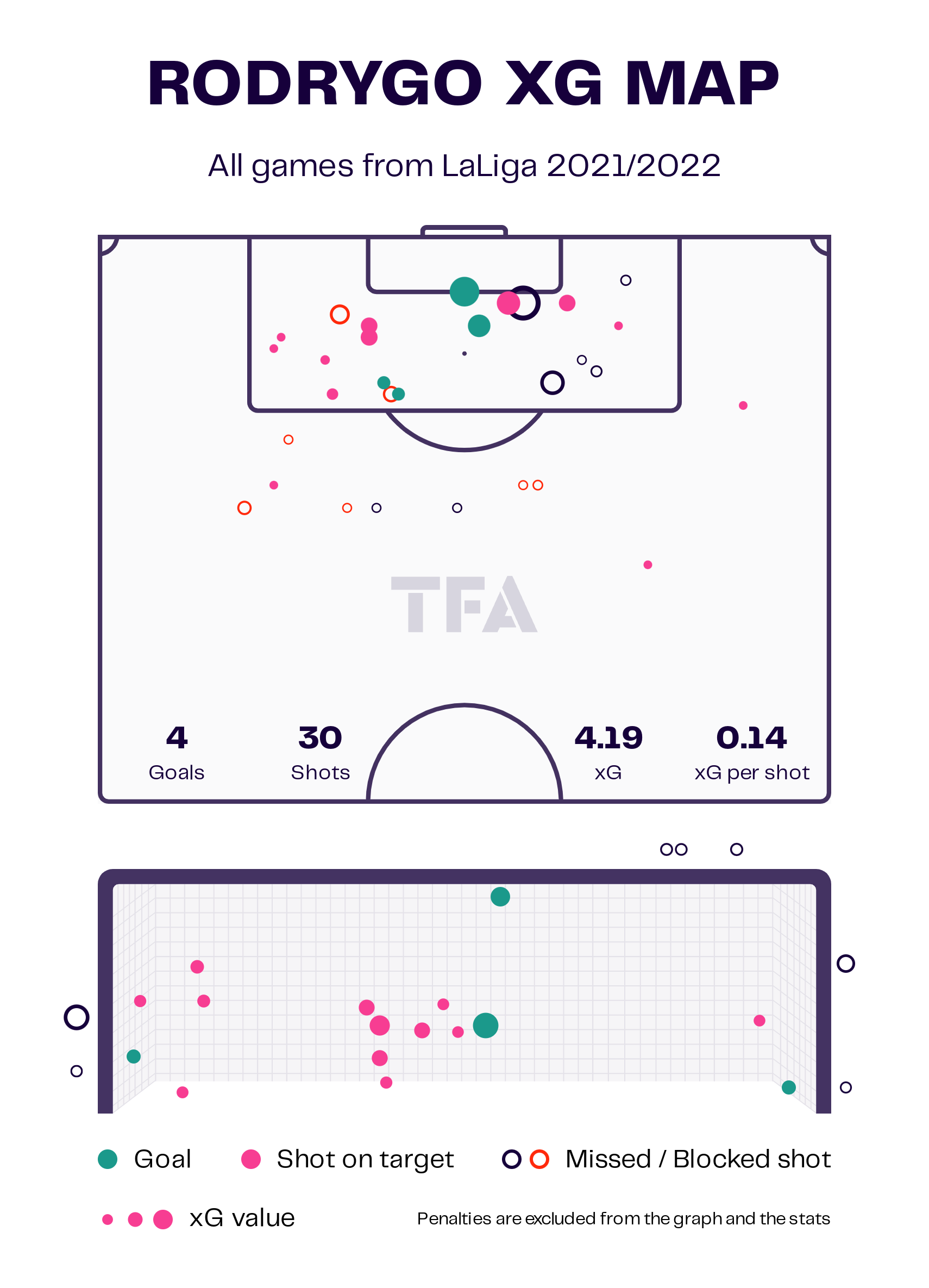 Can he eventually replace Benzema? 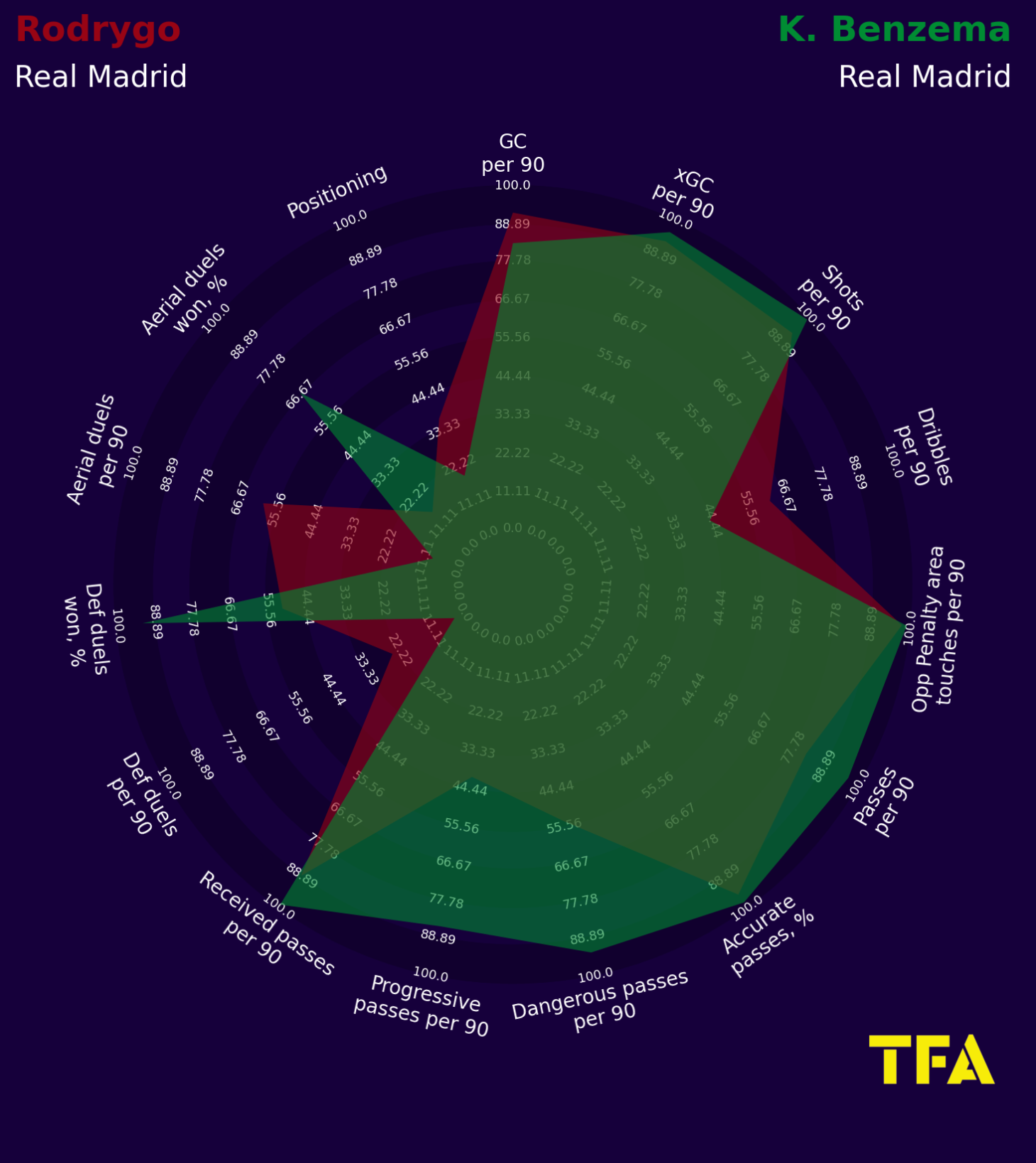 The above visual compares the radars of Rodrygo and Karim Benzema. With the veteran nearing his twilight years, Rodrygo could be an option to eventually replace him. But Benzema has better stats in almost every parameter. He has better passing, more duels won, and more shots per 90, while Rodrygo has better stats at dribbles per game and participates in more duels. Filling in the shoes of Karim Benzema won’t be easy, but Rodrygo has inculcated the Real Madrid DNA and is looking ready to be a star.

Rodrygo was mainly used as a substitute by Carlo Ancelotti last year. But his performances in clutch situations have earned him a place in the starting lineup. He has repaid his manager’s faith in him by scoring seven goals in all competitions and is in excellent form. Ancelotti will be hoping that he can put the shocking World Cup exit aside and continue his brilliant run when club football resumes.

Barcelona brush Real Madrid aside to reach yet another Copa del...

Draw at San Siro sees Barcelona through to the knockout stages

Despite several offer, Unai Núñez is staying in Bilbao