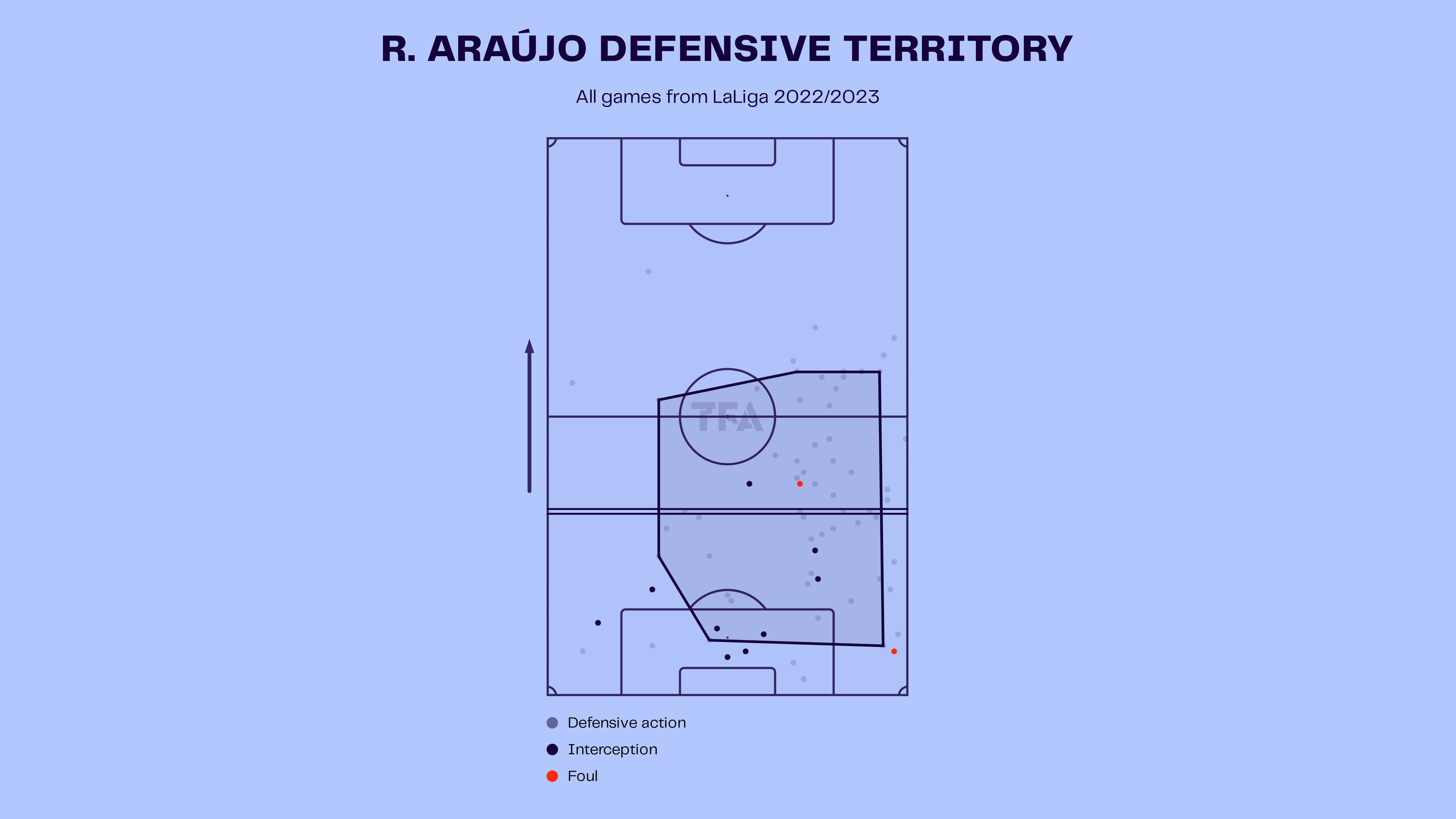 Over the past few years, one of the major concerns for Barcelona has been their defence. They lacked youthfulness, spirit, and fight. Their defence let them down continuously, and when the veterans failed to defend the Barca logo, a young Uruguayan raised his hand and rose to the challenge.

Coming up through the ranks of the esteemed La Masia, Ronald Araujo made his Barca debut under Ernesto Valverde in 2019. His debut in La Liga wasn’t a dreamy one, as he was sent off in the final minutes. But now, the Uruguayan has cemented his place in the starting XI and has gone on to become one of Barcelona’s most important players. Strongly built at 1.88 meters, Araujo is a dominant force at the centre of the defence for Barcelona. His timely interceptions, anticipation, and sheer strength make him an ideal foil for the team. However, he was sidelined due to an injury he faced in the Champions League early in the season. But he is now fit and ready to play again, and we take a look at his stats to understand why his return is good news for Barcelona. 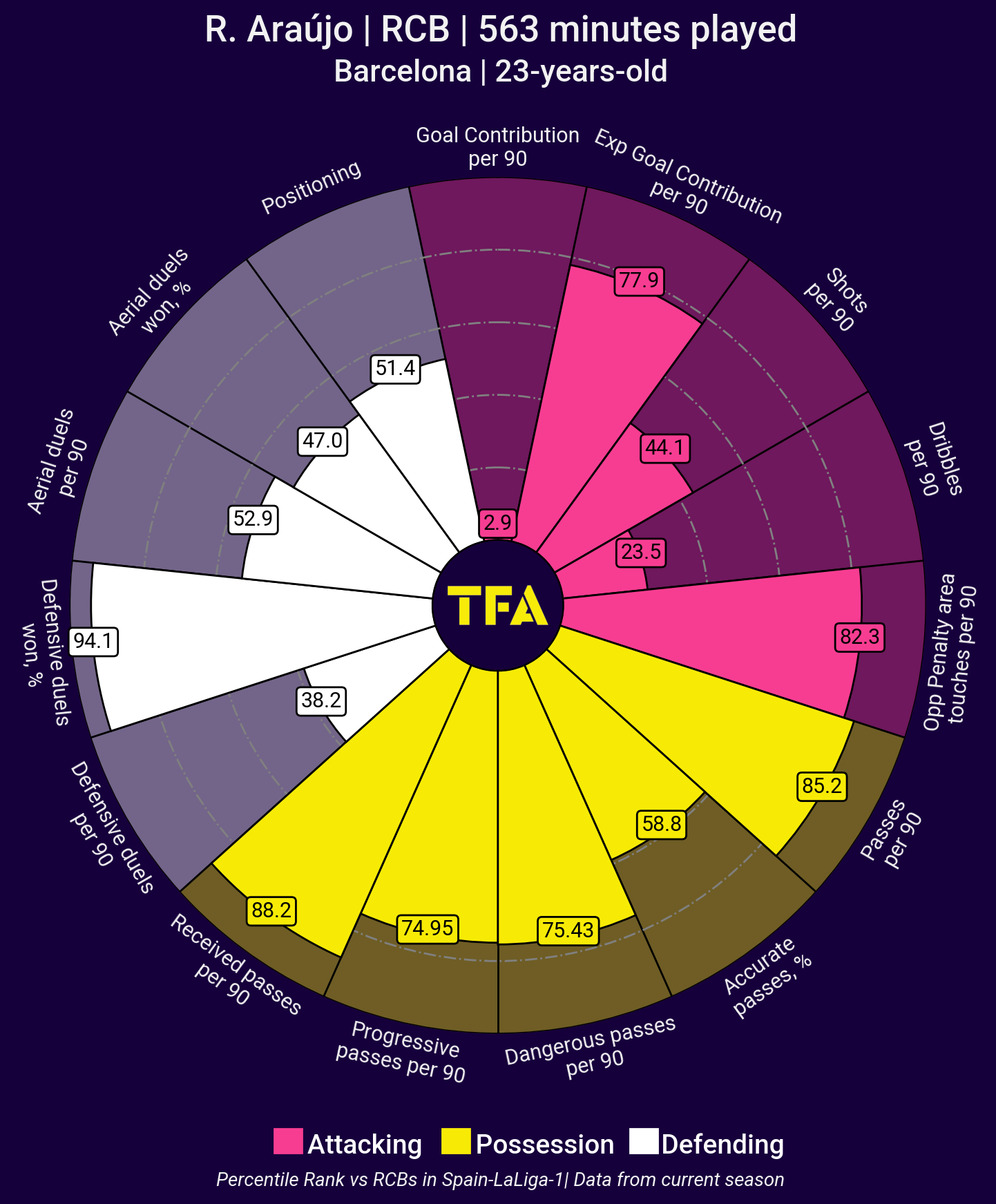 Rock at the back 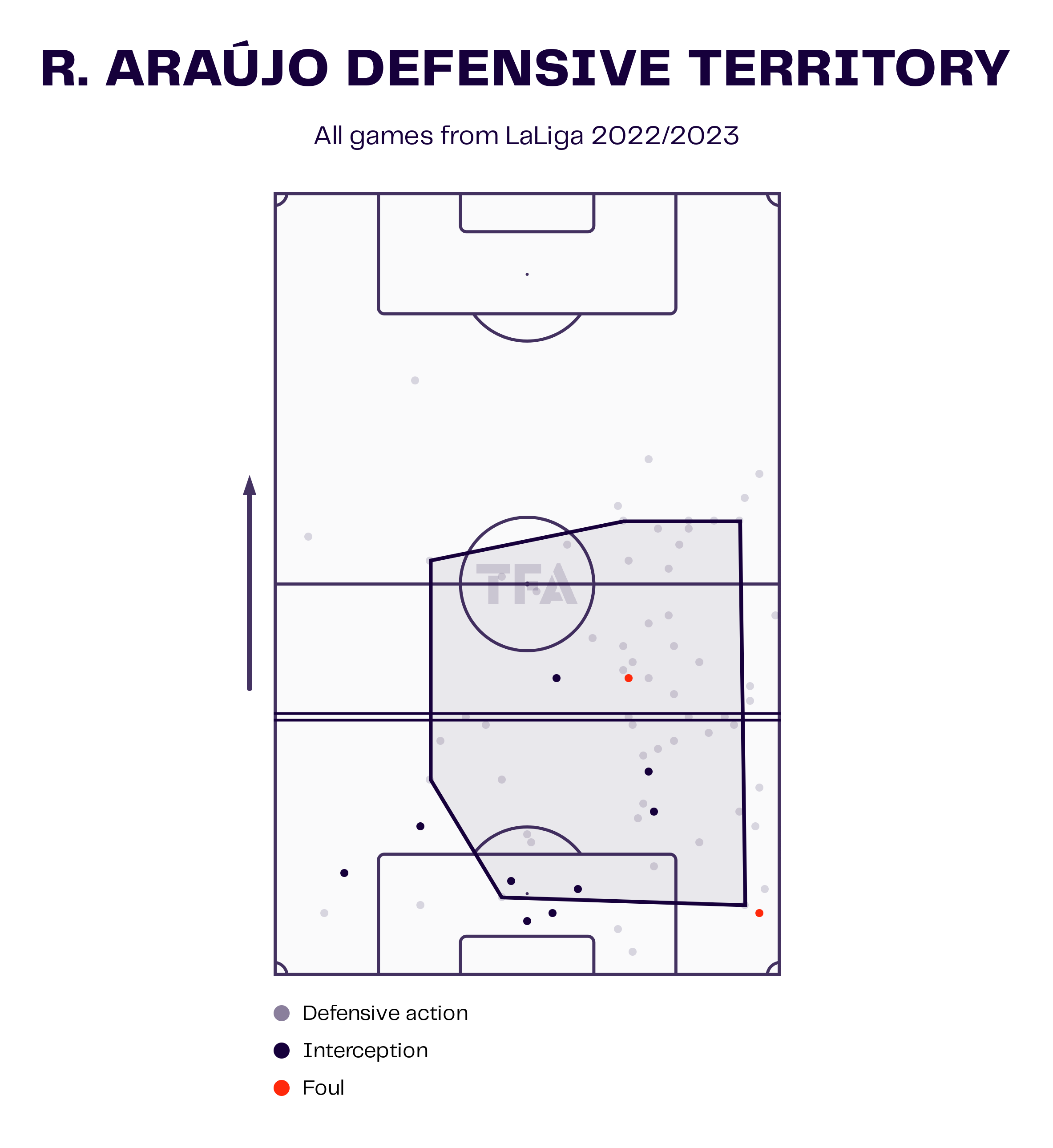 The above visual shows Ronald Araujo’s defensive territory. He has played two matches as a right-back and four matches as a centre-back. His versatility and speed have helped Xavi a lot. His defensive awareness and strength make it hard for players to get past him. A good example would be how he dealt with Vinicius Jr. in last season’s El Classico. Araujo has made an average of 2.08 interceptions this season. He has also taken part in around 4.48 defensive duels, winning 82.1% of them. Araujo’s tall stature makes him a dominating figure in the air as well. He has contested an average of 3.36 aerial duels this season with a success rate of 61.9%. In addition, Araujo has recovered the ball around 7.83 times per game. 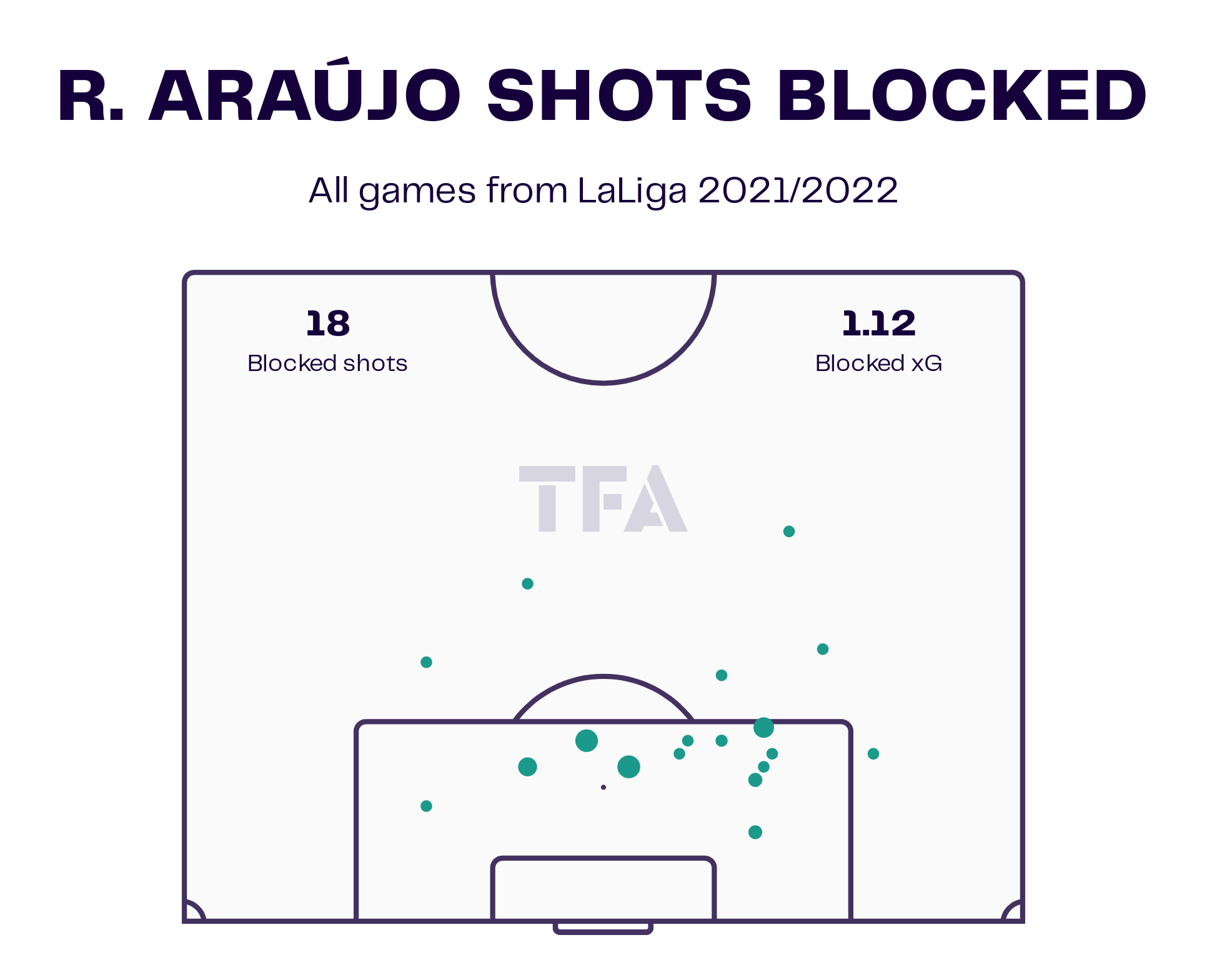 Since the sample size from this season was too small, we looked at shots blocked by Araujo in the previous season. He stopped 18 shots and was an important figure in front of the goal. His lone presence in the backline was an assurance for Barcelona, and he has saved Barcelona from counterattacks and other attacks single-handedly. On top of that, he made an average of 2.6 clearances per game last season. 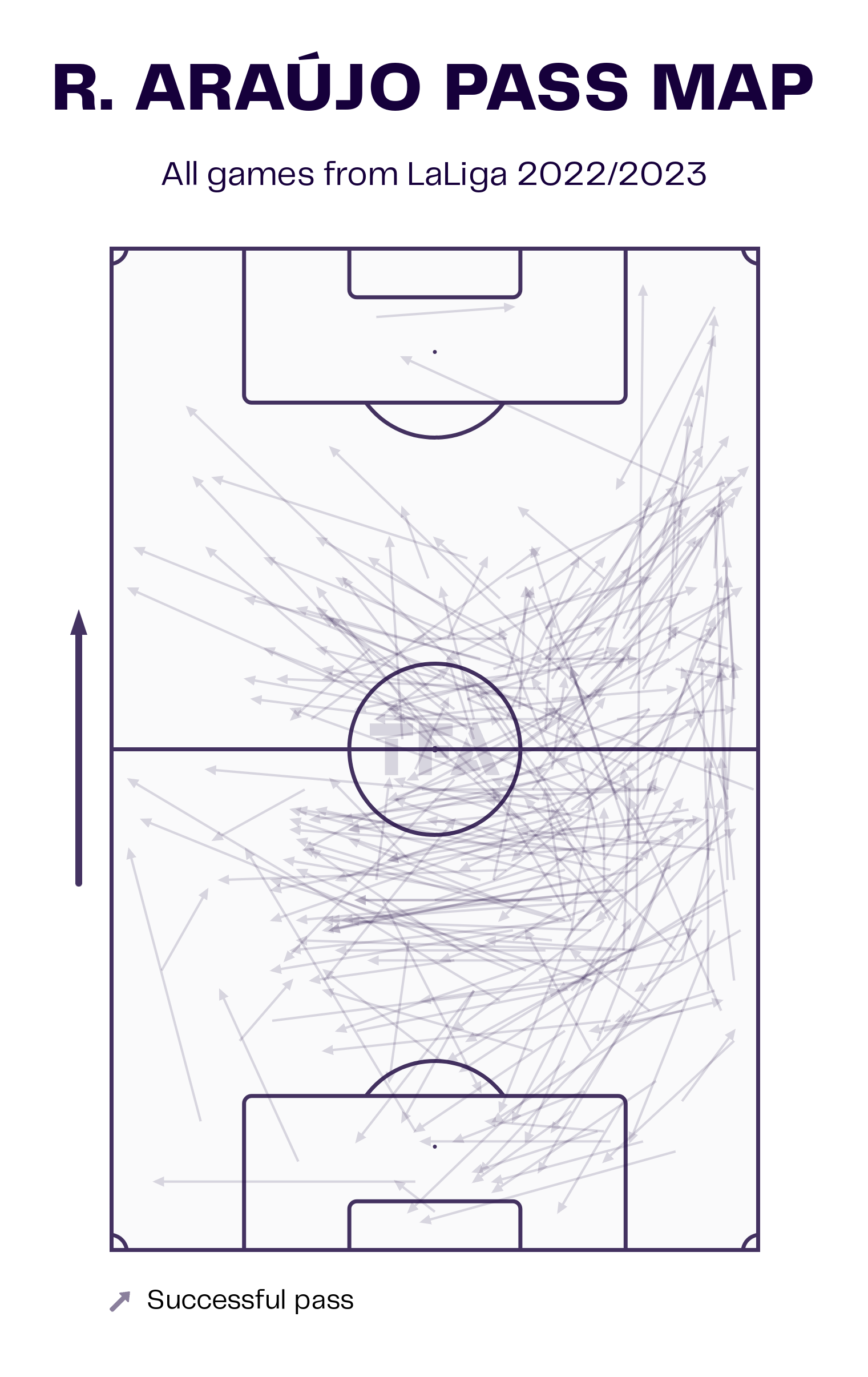 With a passing accuracy of 89.5%, Araujo collects the ball from Ter Stegen and is responsible for building the play. He often finds the midfielders with his passes and is also not shy about making some diagonal passes to the wingers. Araujo has made an average of 4.8 long passes this season with 43.3% accuracy. But he takes a lot of time to pass the ball sometimes, which has annoyed the Barcelona coach at times. When the team is attacking, Araujo occupies a high position and plays around 8.31 passes into the final third with 76.9% accuracy. 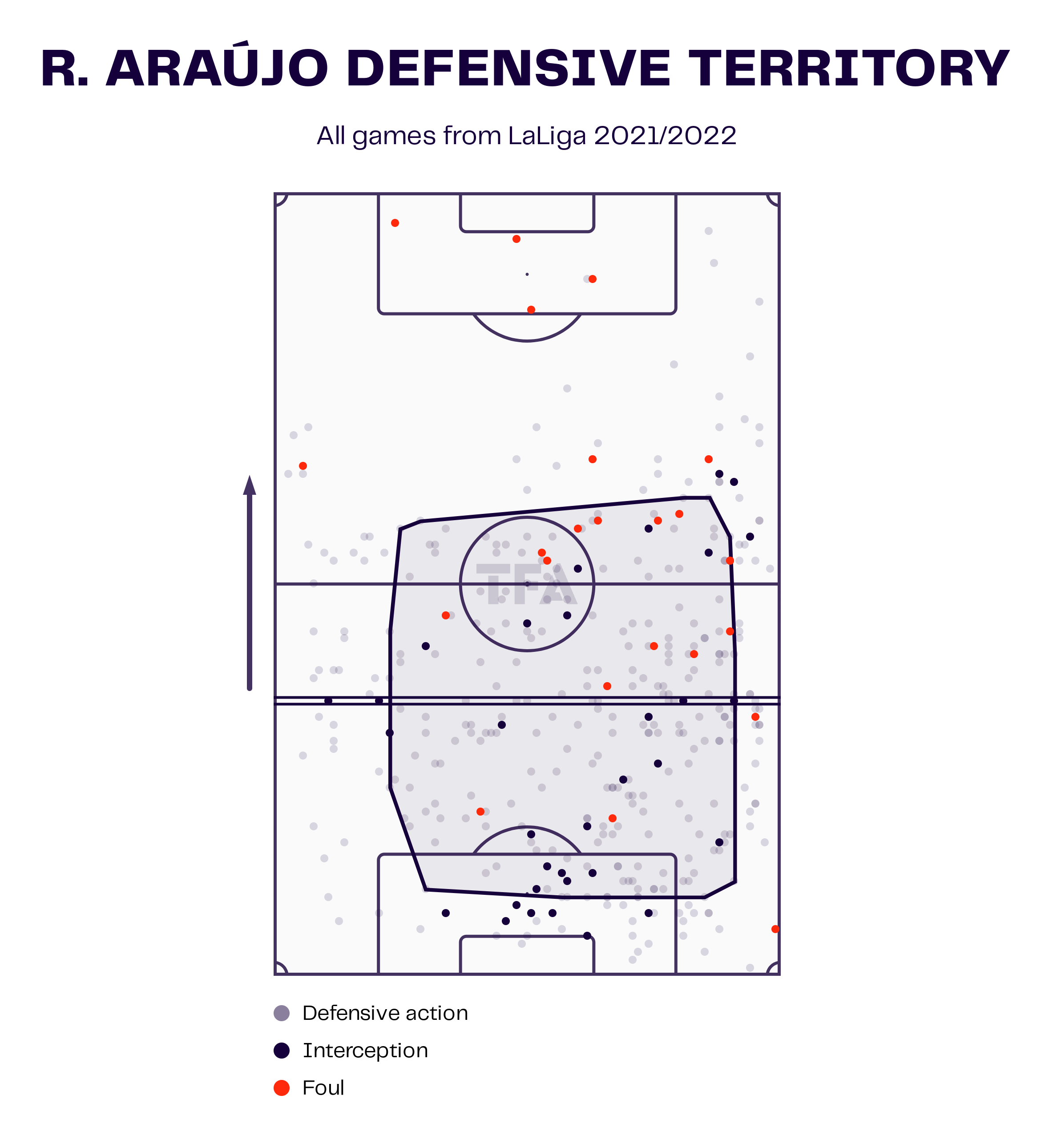 The above visual shows Ronald Araujo’s defensive territory from last season. He was a rock at the back for a struggling Barcelona defence and made the difference many times. Last season, he took part in an average of 6.12 defensive duels with a success rate of 72.6% and 3.86 aerial duels with a success rate of 65.1%. Araujo made 4.34 interceptions per game and recovered the ball more than nine times per game. His presence was crucial last year, and it wouldn’t be wrong to say he played a big role in Barcelona finishing second in La Liga.

Strongest centre-back pair in the league? 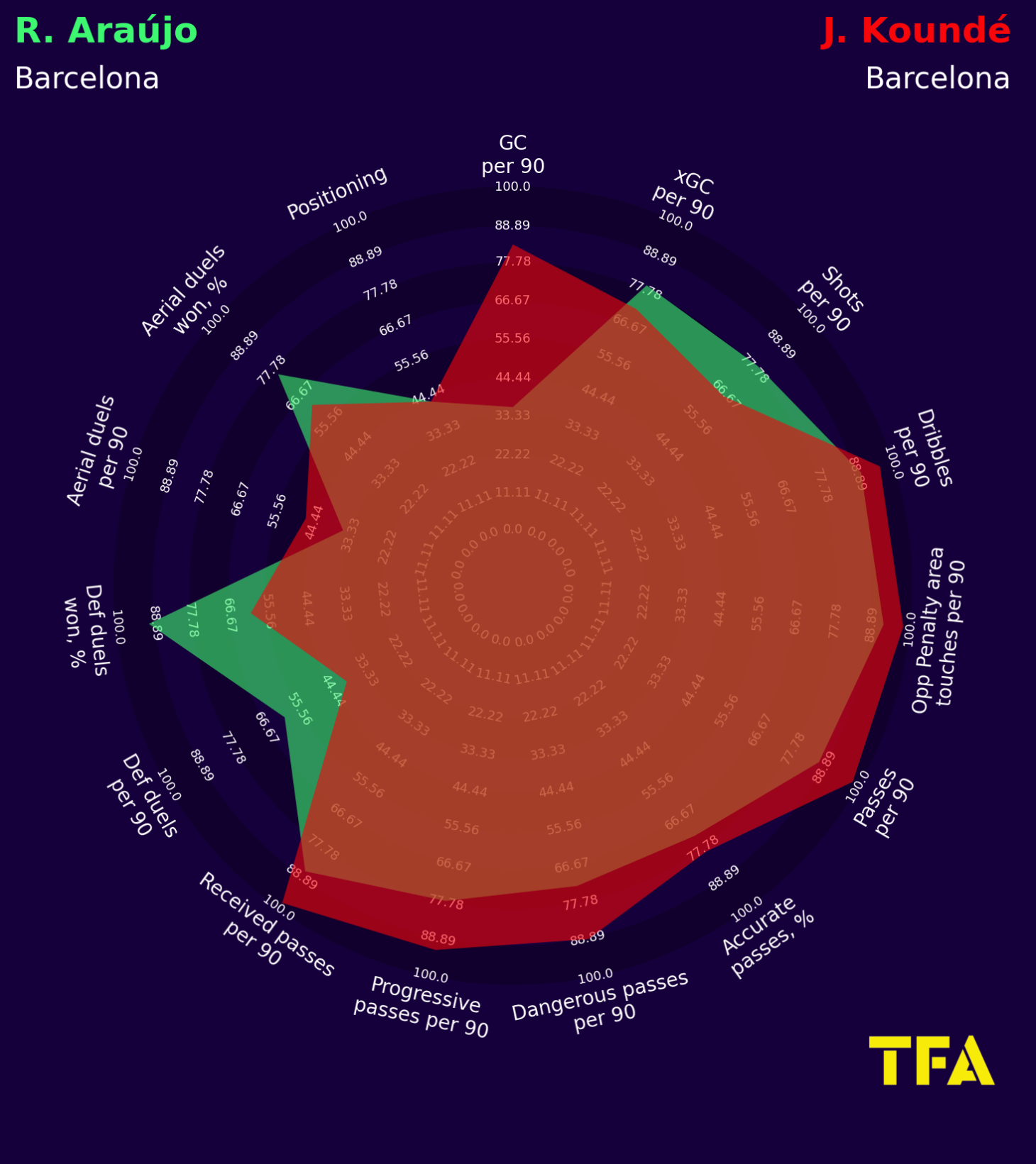 Barcelona signed Jules Kounde from Sevilla in the summer. The above visual compares the radars of Ronald Araujo and Jules Kounde. As we can observe from the visual, Araujo has better stats in defensive duels, aerial duels, and shots per game, while Jules Koundé has better stats in passing, positioning, and goal contributions per game. Together, they form a formidable partnership and make one of the most frightening duos on the backline.

Ronald Araujo has been a great addition to Barcelona’s backline and has been a rock at the centre of their defence. His return is a huge boost to them, as it makes the defensive backline stronger than it already is. Araujo’s absence hurt them in the Champions League, and Xavi and Barcelona would be hoping that the Uruguayan stays fit for the rest of the season.

‘Cream of the crop’- Barcelona should consider Willian free transfer

Federico Valverde: The key to the Real Madrid engine room