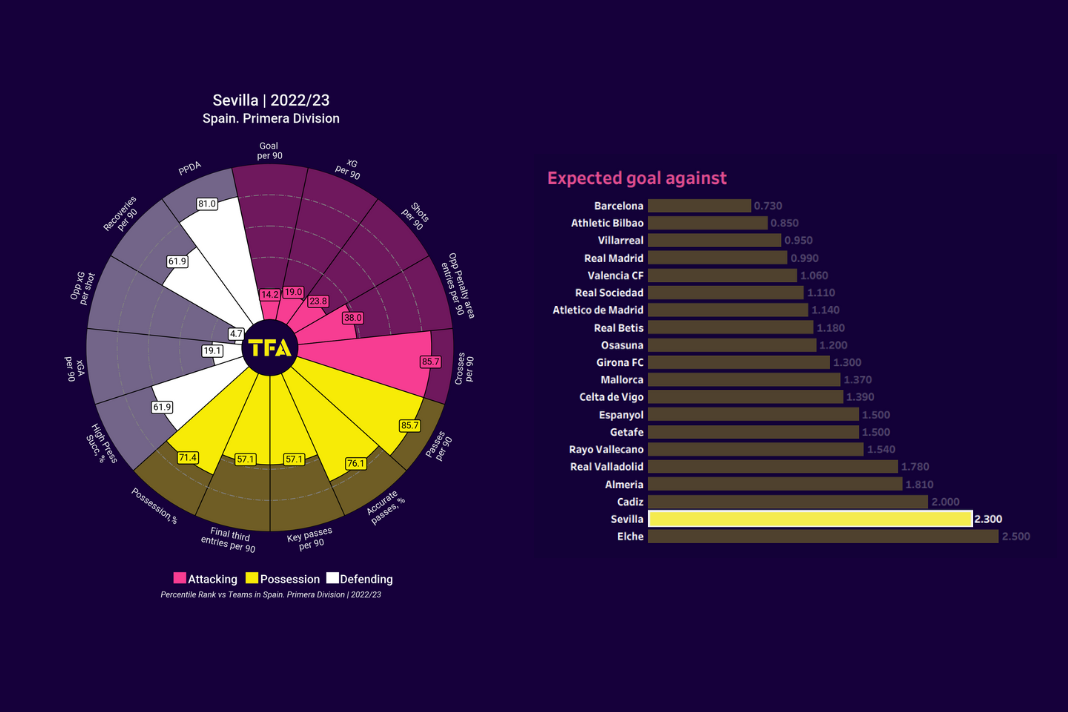 Sevilla is one of the big names in La Liga and have finished in the top four for the last three years. However, this year things have taken a bad turn for them, and suddenly they find themselves on the brink of relegation. They are now in the 17th position with just 11 points from 13 matches. They have lost six, drawn five, and won only two matches this season. They lost some crucial players like Jules Kounde, who was an assertive figure in the centre of defence for them, in the summer transfer window. Even though they have brought in good players like Alex Telles, Isco, and Kasper Dolberg, they have failed to produce good performances and are having one of the worst seasons in their recent history.

We take a look at some stats to understand what happened to Sevilla this season. 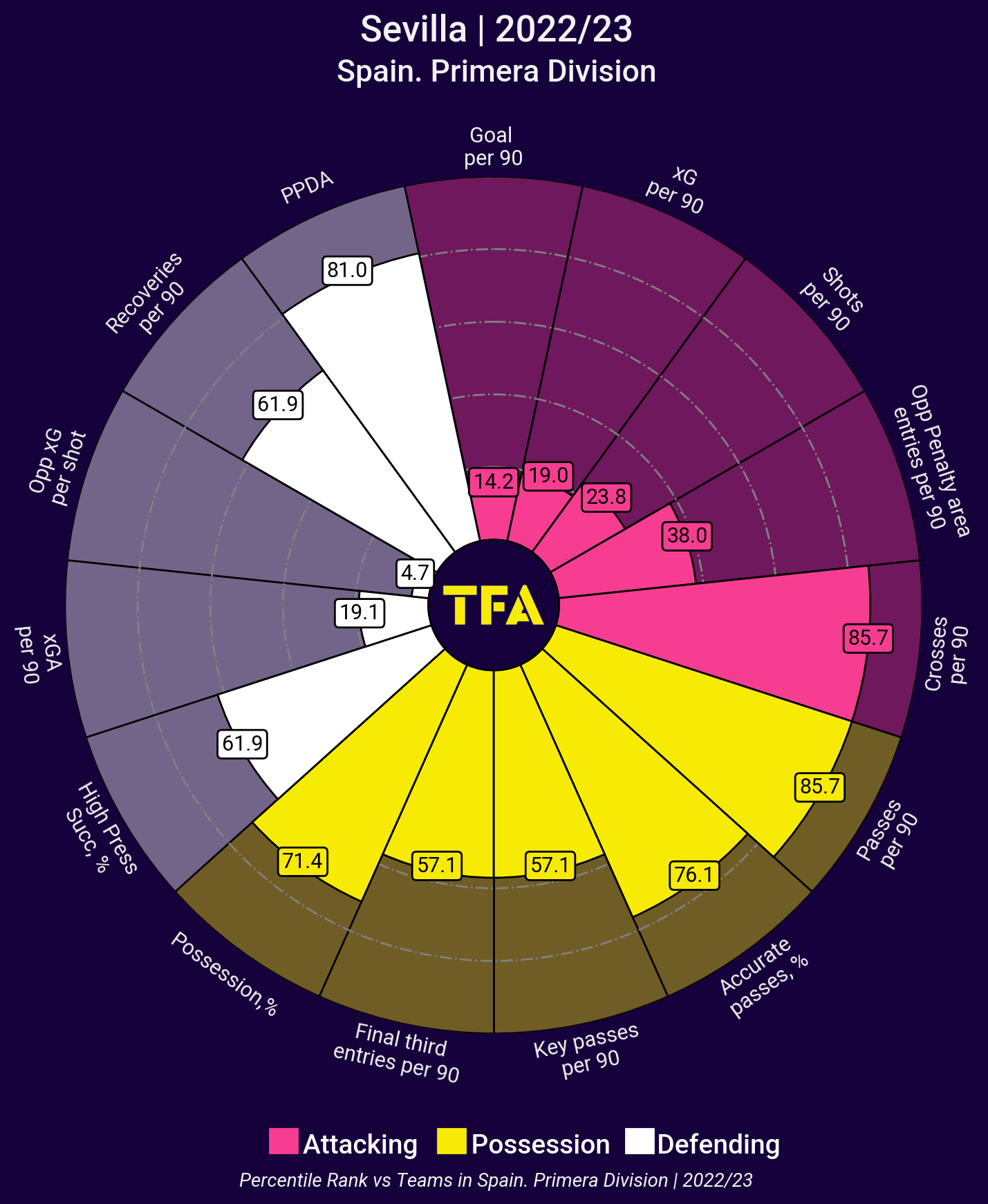 Sevilla have had a very poor season so far and is in 17th place in La Liga. They have been knocked out of the Champions League as well. They average 0.92 goals per game and have only scored 12 goals this season. Sevilla do not possess the killer instinct in front of the goal, and that is hurting them badly. Their inability to find the back of the net is reflected in the numbers as well. The above chart shows the percentile rank in comparison to other teams in the league. It can be observed that Sevilla have struggled in the attacks and are ranked low in almost every attacking department. In their last four matches, they have tried 48 shots, with only 14 of them on target and a mere three of them finding the back of the net. They average 10.31 shots per game, but only 68.6% of them threaten the goalpost. Even though they launch 27.31 positional attacks per game, only 24.8% of them lead to shots. Jorge Sampaoli and co. know how costly these misses are, as they have conceded 20 goals already this season. 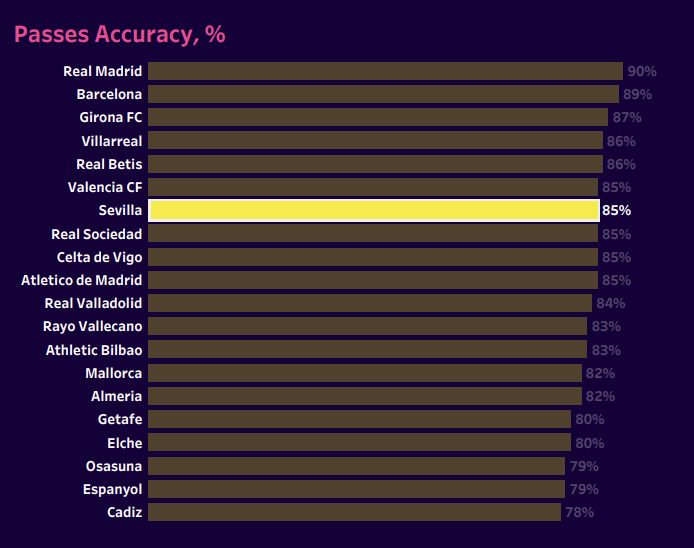 Passing is one area where things have gone according to Sevilla’s plan. They have a passing accuracy of 85% and have midfielders like Ivan Rakitic and Isco who can play the passing game well. They average 465.85 passes per game and complete 85% of them successfully. They even have a good record of passing in the final third as well, but it goes unnoticed as the chances are not converted. Sevilla averages 52.54 passes into the final third of a game with an accuracy of 74.2% and 68.85 progressive passes with an accuracy of 72.5%. But eventually, it all comes down to converting those chances, and that is where Sevilla have failed dreadfully. 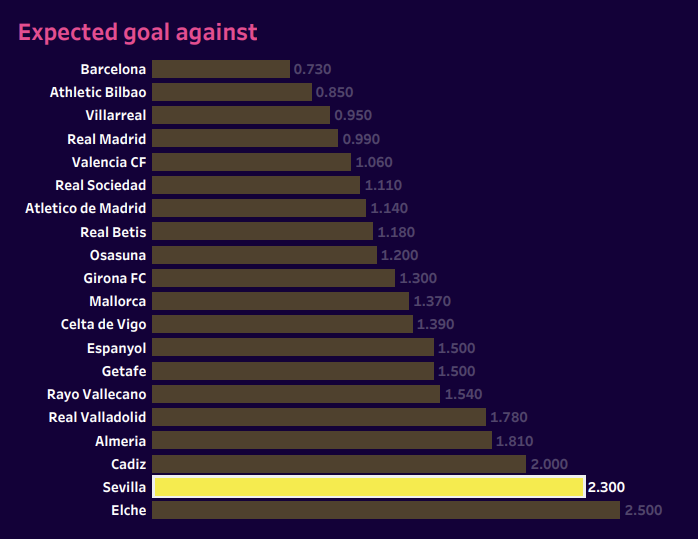 If Sevilla have had problems going forward, it’s nothing compared to what is happening at their defensive line. They have one of the worst xGAs in the league and have conceded 20 goals with a negative eight-goal difference. Sevilla concedes 1.54 goals per game on average, and it is fair to say that they dig their own grave by failing to convert their chances. They deploy a high line mostly, but that has hurt them as teams often score goals against them through counterattacks. The Sevilla backline is also guilty of losing the ball in their own half too many times and has done so 90.54 times on average this season. Last season, they had an assuring presence at the back in the form of Jules Koundé. But with the Frenchman’s move to Barcelona this summer, Sevilla’s defence has looked rather bleak.

Sevilla has had a forgetful season so far, and Jorge Sampaoli knows he has to change the situation as soon as possible before they slip into relegation. The management and board will be trying to boost their squad strength in the winter transfer window and do their best to compete well in the Europa League.

“Can mark an era at Barcelona” – Xavi’s replacement finally found...