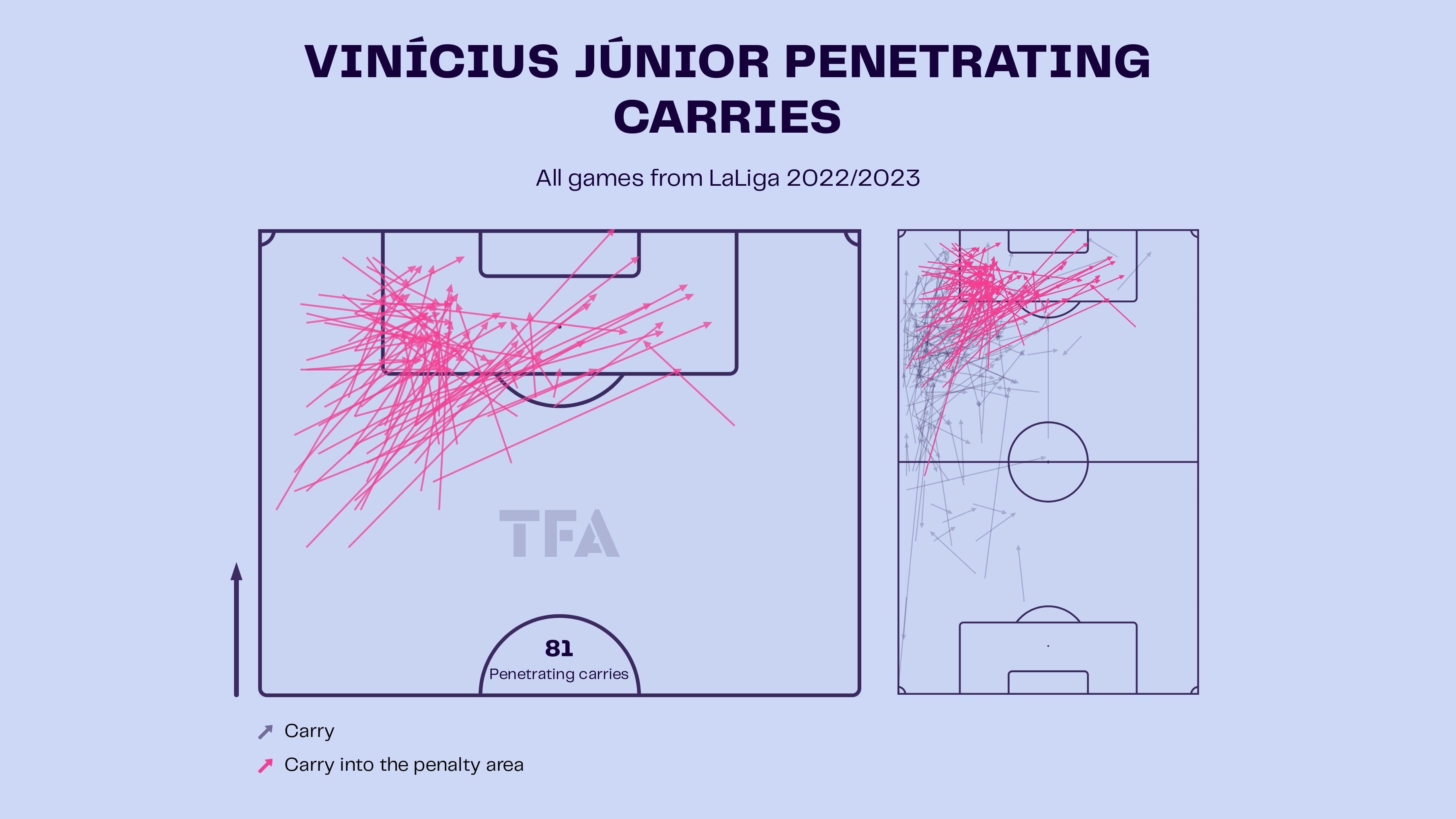 Vinicius Jr. is undoubtedly one of the best talents in the world at the moment. He exudes Brazilian flare and is unstoppable once he gets on the ball. Vinicius has also developed the ability to perform on the biggest stages. The 22-year-old has been very impressive and played a huge role in Real Madrid’s successful campaign last year. His pace, dribbling, and ball control make him a very dangerous customer. His role in the National Team has become even more important as some key players are out with injuries.

We look at some stats to understand how Vinicius Jr. can inspire the Canarian army to bring the World Cup back to their shores.

Vinicius Jr. has played 14 matches in La Liga this season and was a starter in all the matches. He has scored six goals this season and has three assists to his name as well. Vinicius has started in two matches this World Cup and is the outlet for all the Brazilian counterattacks. 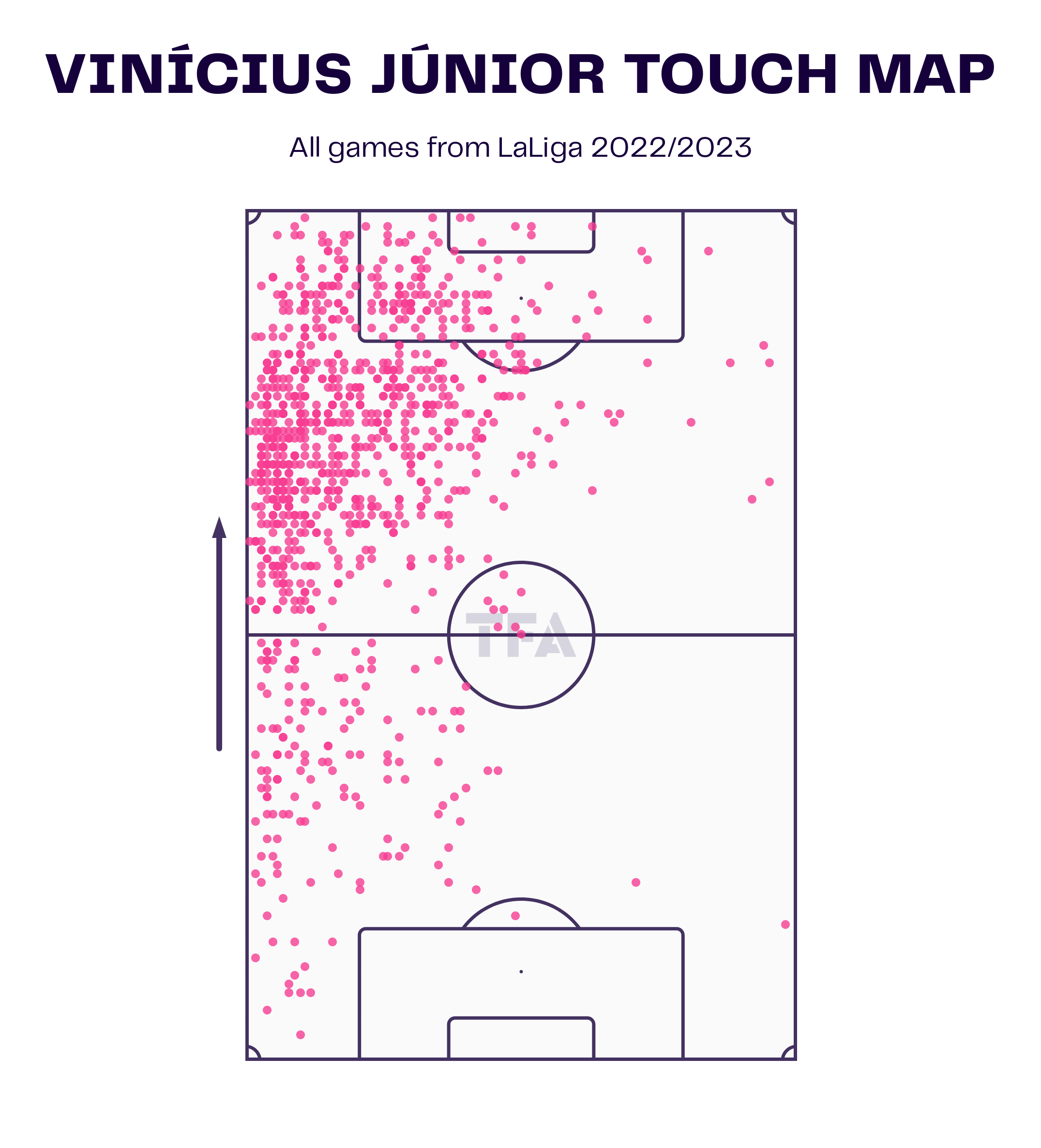 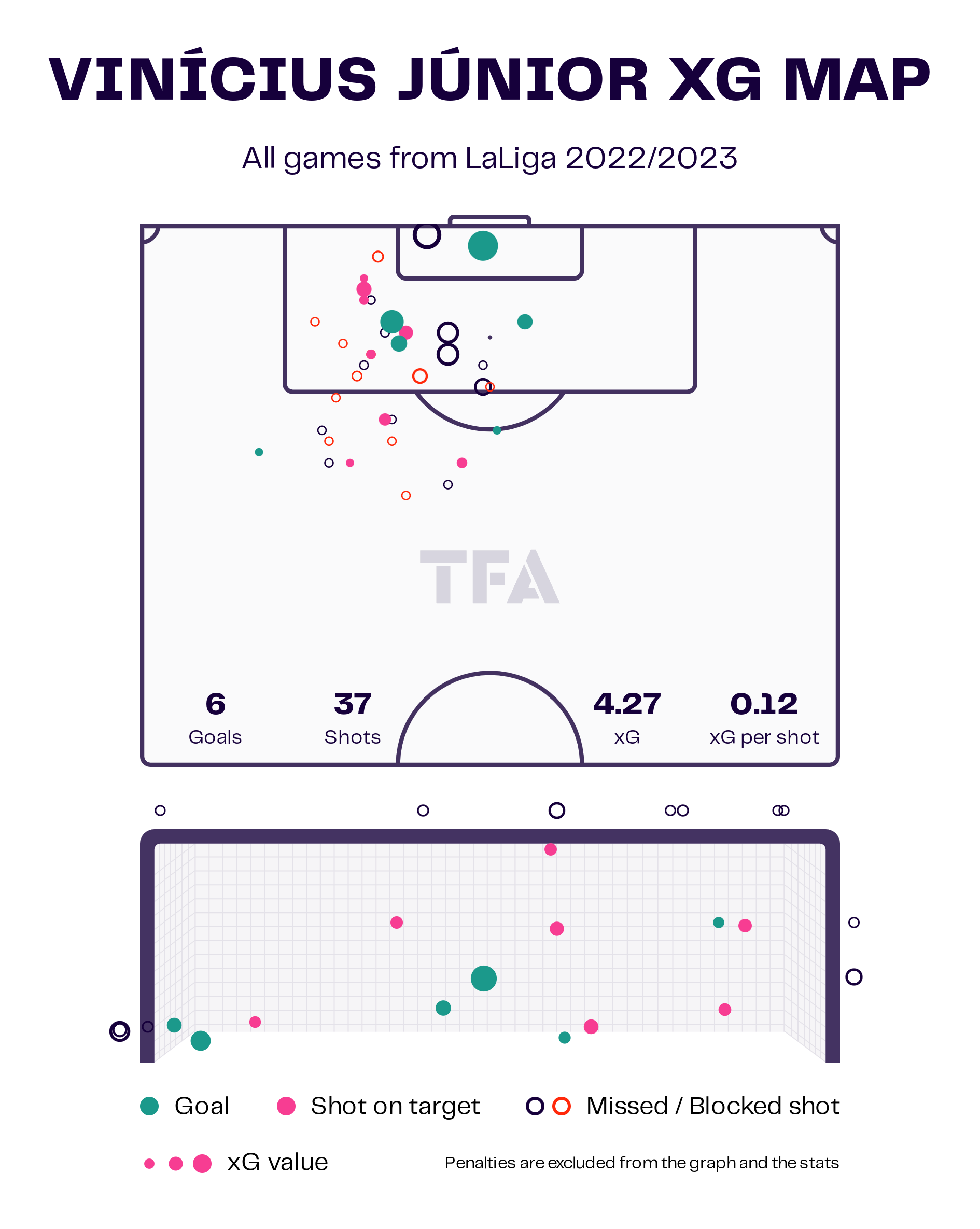 The first visualization shows the touch map of Vinicius Jr. We can observe how he usually stays wide on the left flank. Most of his touches are in the attacking half and he dribbles past players with his pace. He can dribble past challenges, provide an assist or cut inside and go for the goal himself. His involvements are mainly in the attacking third and enjoy an average of 4.88 touches in the penalty box.

The second visualization shows the xG map of Vinicius Jr. He has attempted a total of 37 shots this season, scoring six goals. Out of the 37, 24 shots were from inside the penalty box. He also attempted 13 shots on target. We can observe from the visual how almost all of his shots are from the left side of the post. This distance from the post brings the xG of each shot down and therefore has an xG per shot of 0.12. 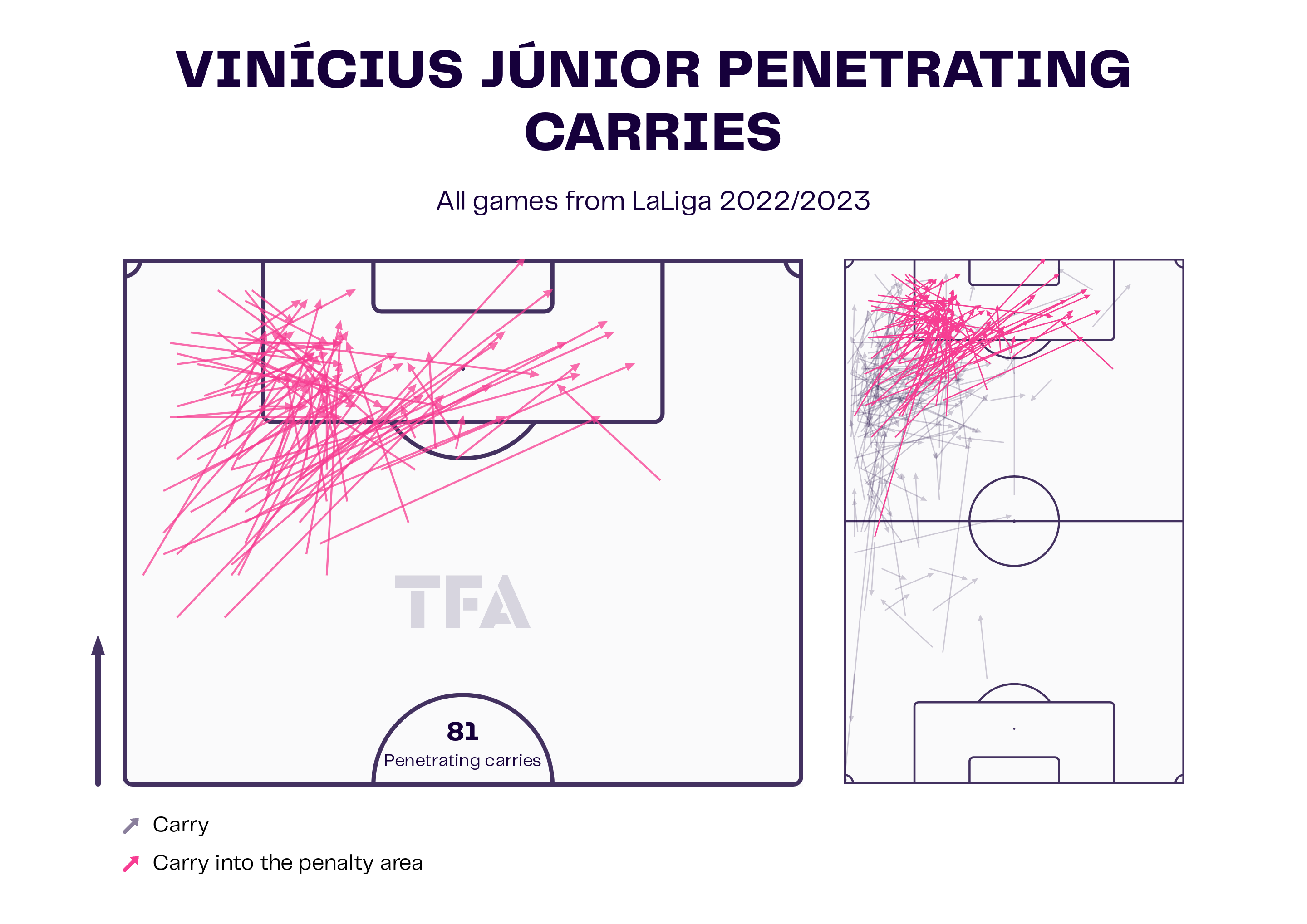 It would be a crime to talk about Vinicius Jr and not mentions his dribbling skills. His pace combined with his dribbling makes him one of the best left-wingers in La Liga. The above visualization shows the penetrating carries of Vinicius Jr in La Liga this season. This visual alone explains how good he is at dribbling. Vinicius flies past defenders as if they don’t even exist. 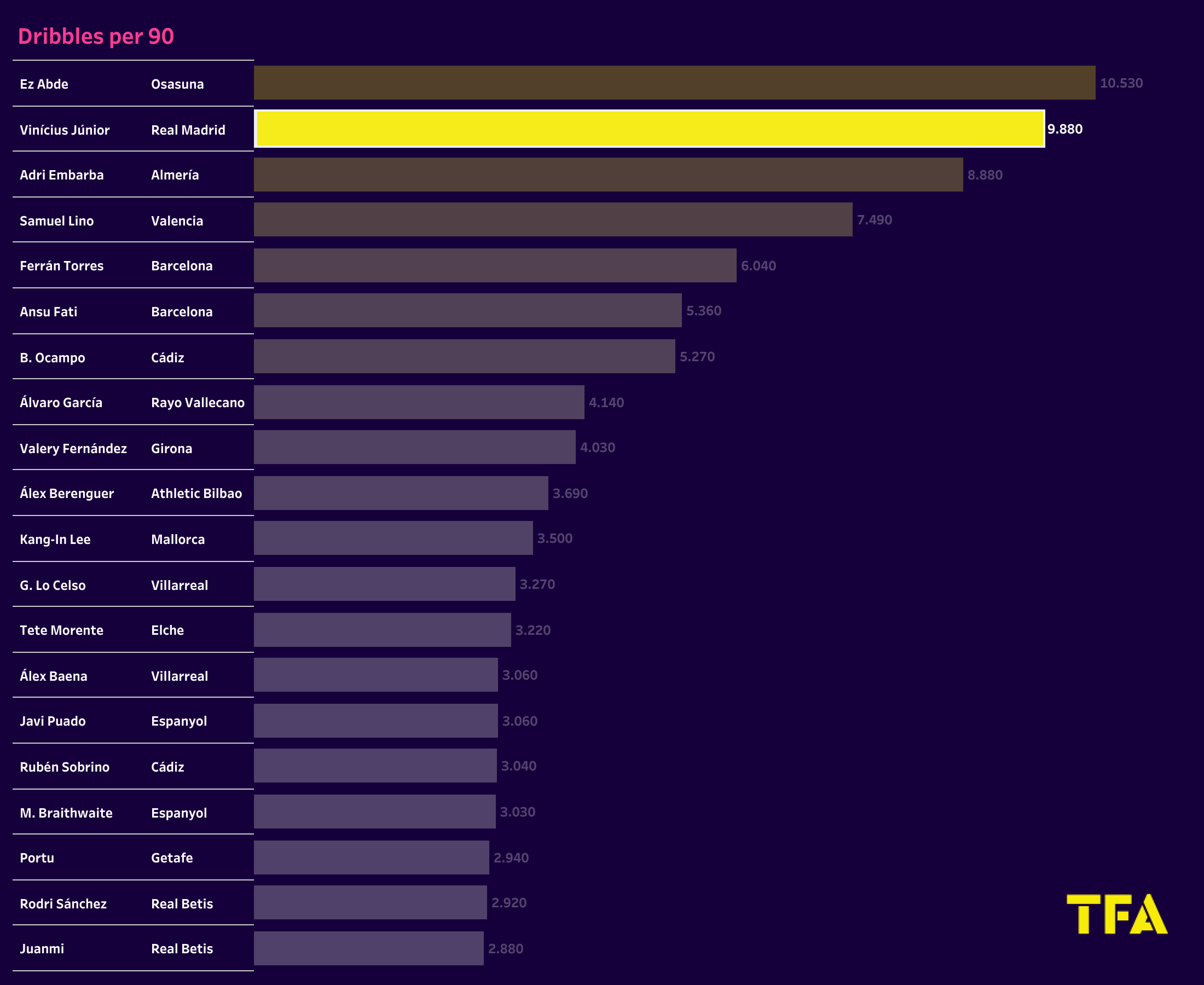 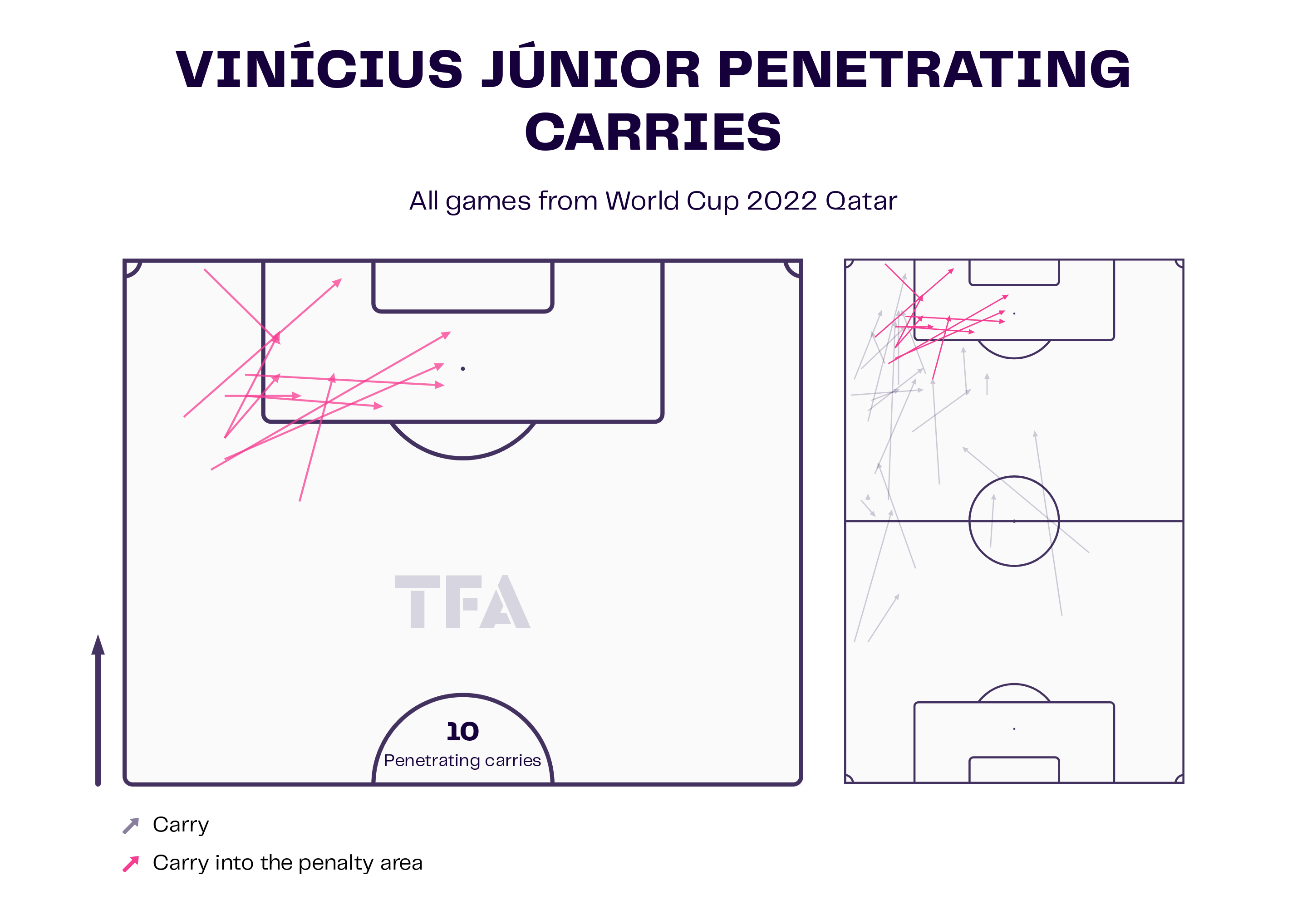 The above visual shows the penetrating carries made by Vinicius Junior in this World Cup. He has been a strong presence on the left flank for Brazil and has made ten penetrating carries so far. He is the outlet of Brazil’s counterattacks and dribbles past opponents very easily. He will have a crucial role to play in the coming matches. 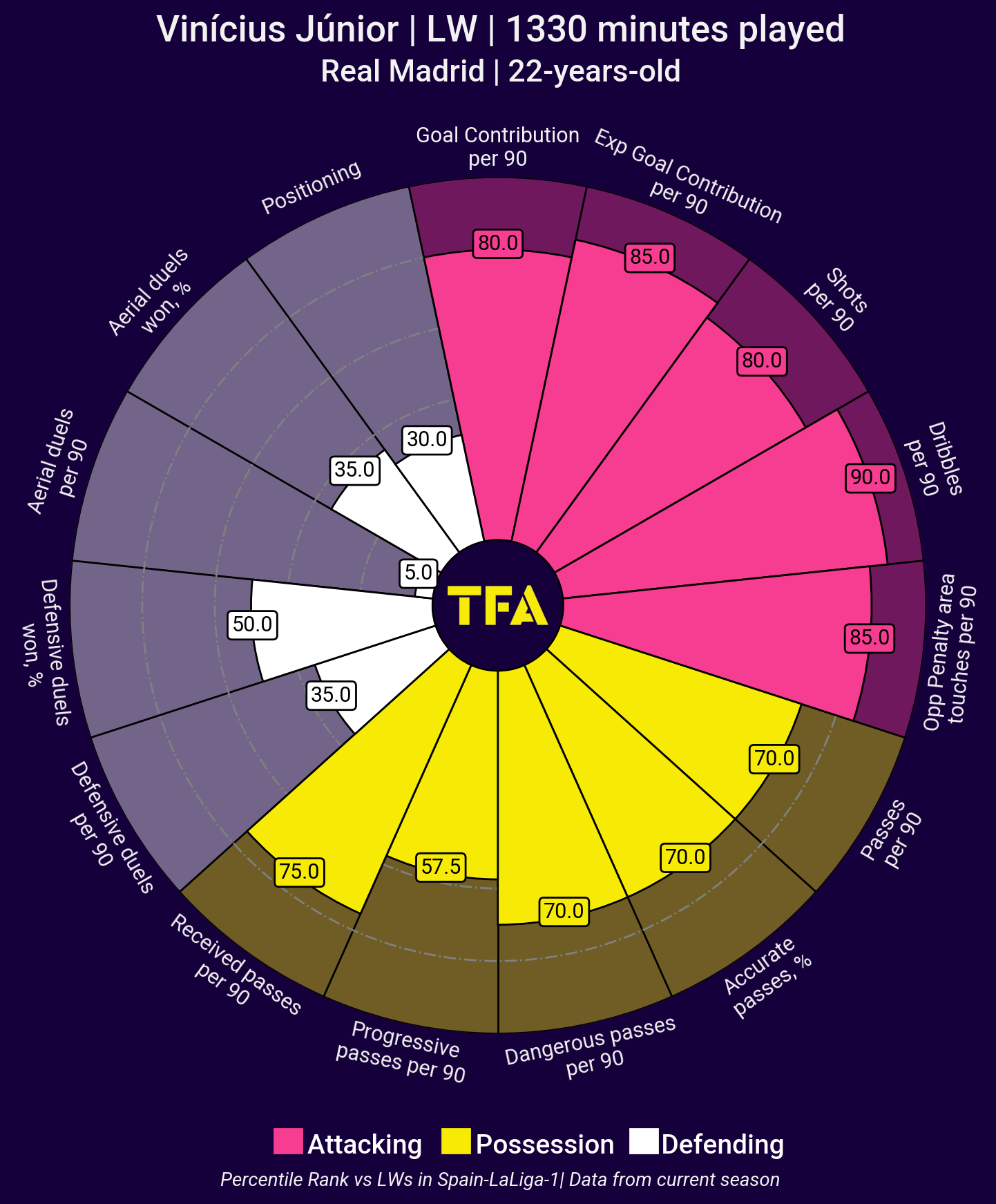 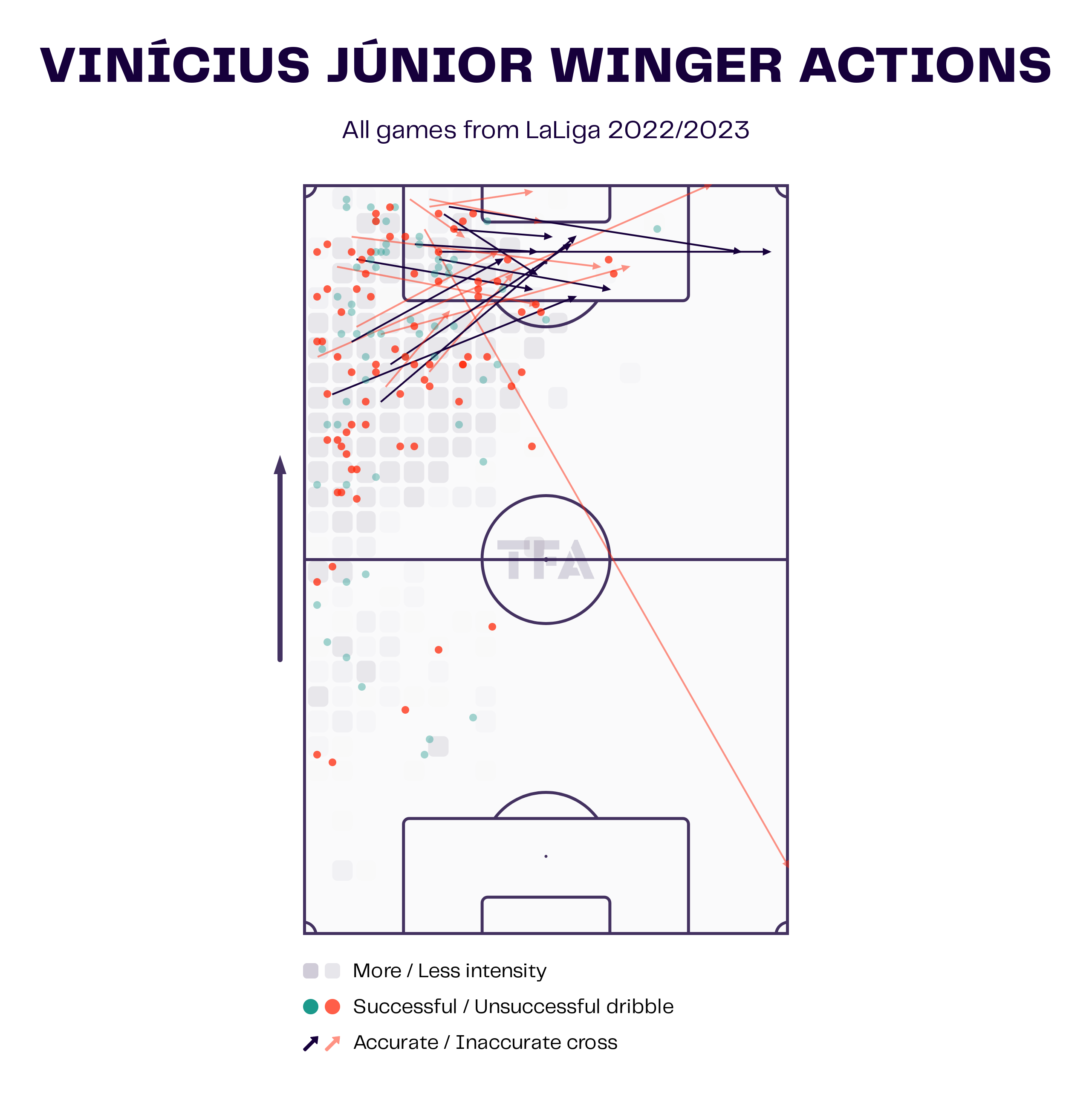 Vinicius Jr is one of the best wingers in the world at the moment. The 22-year-old is one of the best in 1v1 against players and takes part in an average of 18.68 offensive duels per game. He succeeds 42.8% of the time and creates danger through the wing. The above visualization shows the actions of Vinicius Jr as a winger this season. He speeds past the opposition defenders and whips in crosses or some cut-backs to find the right player. He plays an average of 2.03 crosses per game and has an accuracy of 36.7%. These buccaneering runs will be important for Brazil in this World Cup as they would be facing some tougher sides from the pre-quarter.

Vinicius Jr has announced himself on the biggest of stages for his club and has won many trophies in his short career. This is his chance to prove his mettle at his first World Cup. If there is one thing we can say about a player from Real Madrid is that there is nothing as too much pressure for them. They have always found ways to turn the tide in their favour. Tite will be hoping that Vinicius Jr will find his finishing boots as the World Cup approaches its business end.

This rarely seen player could be Real Madrid’s key to solving...

How Celtic Park was quietened by clinical Valencia