The FIFA World Cup 2022 saw many amazing stories unfold, with the shocking exits of some heavyweights in the group stages and underdogs making it big into the knockout stages. But one of the stories of the tournament is Morocco’s historical run, becoming the first African country to reach the semi-finals of the World Cup.

Morocco was an example of a well-organised defence, as no team had managed to score against them until they faced France. Apart from the incredible defensive work, the credit goes to their goalkeeper, Yassine Bounou. The smiling hero who plays for Sevilla in La Liga was one of the best goalkeepers of the tournament. Bounou made eight saves in the tournament and played a big role in eliminating Spain, Belgium, and Portugal.

We look at some of the stats of the Moroccan hero who kept the European heavyweights out.

Yassine Bounou was one of the constants on the Moroccan team and was a dependable force in front of the post for them. He started all six matches in the World Cup and made eight saves.

The above visual shows the saves made by Yassine Bounou against Portugal in the World Cup. He made three saves in the match and knocked out Cristiano Ronaldo from the World Cup. Bounou had an xCG of 0.87 in that game but didn’t concede a goal. Moreover, he had an average xCG rate of 0.58 and conceded an average of 0.72 goals per game in the whole tournament. 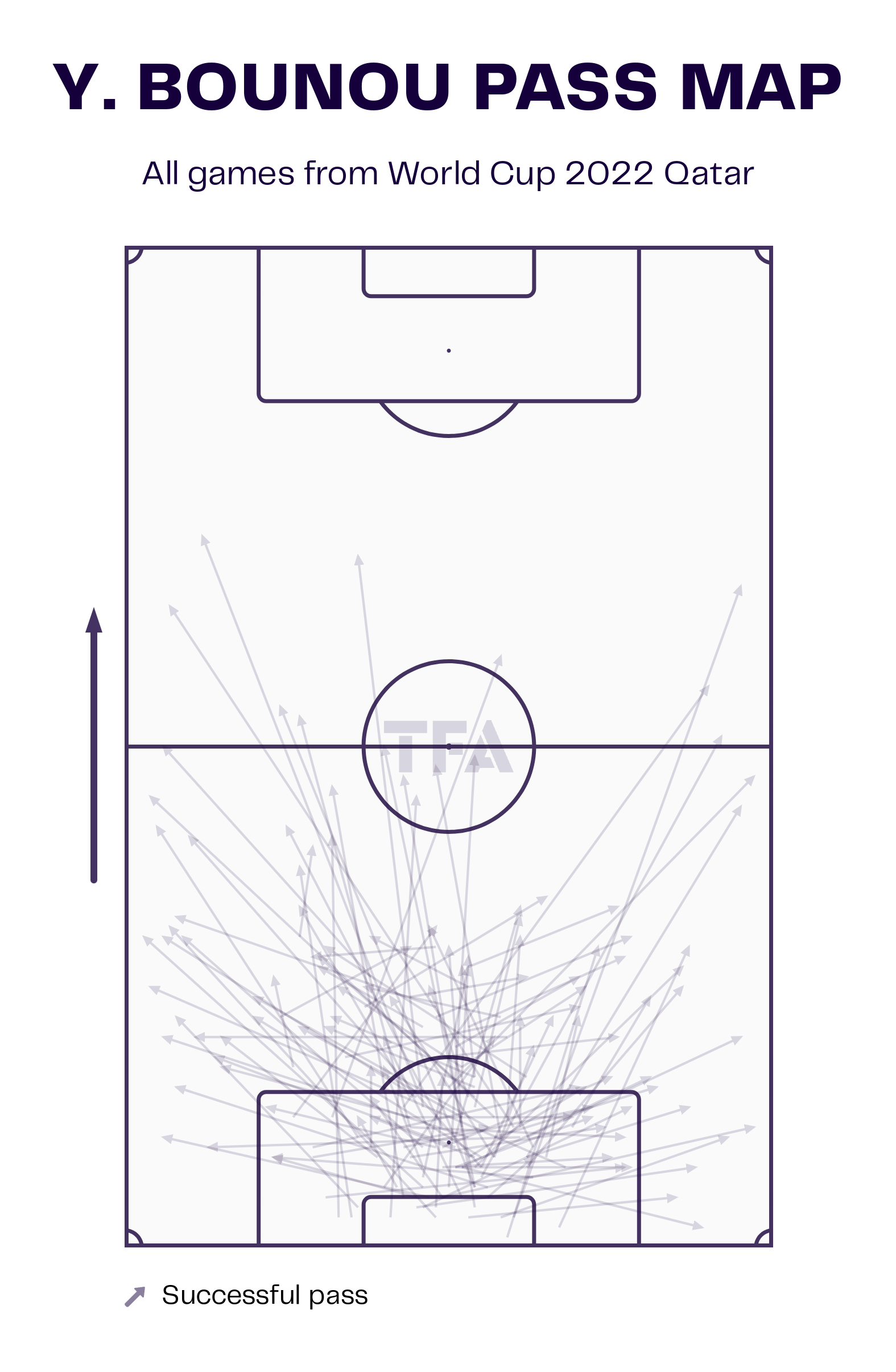 The above visual shows the pass map of Yassine Bounou in the World Cup. We can observe from the visual that he mainly played short passes either to the central defenders or to the wing-backs. He also played long passes into the final third sometimes. Out of the 56 goal kicks he took, 34 were long goal kicks and 22 were short. He had an accuracy of 75% when playing long passes and an accuracy of 96.9% for short passes. 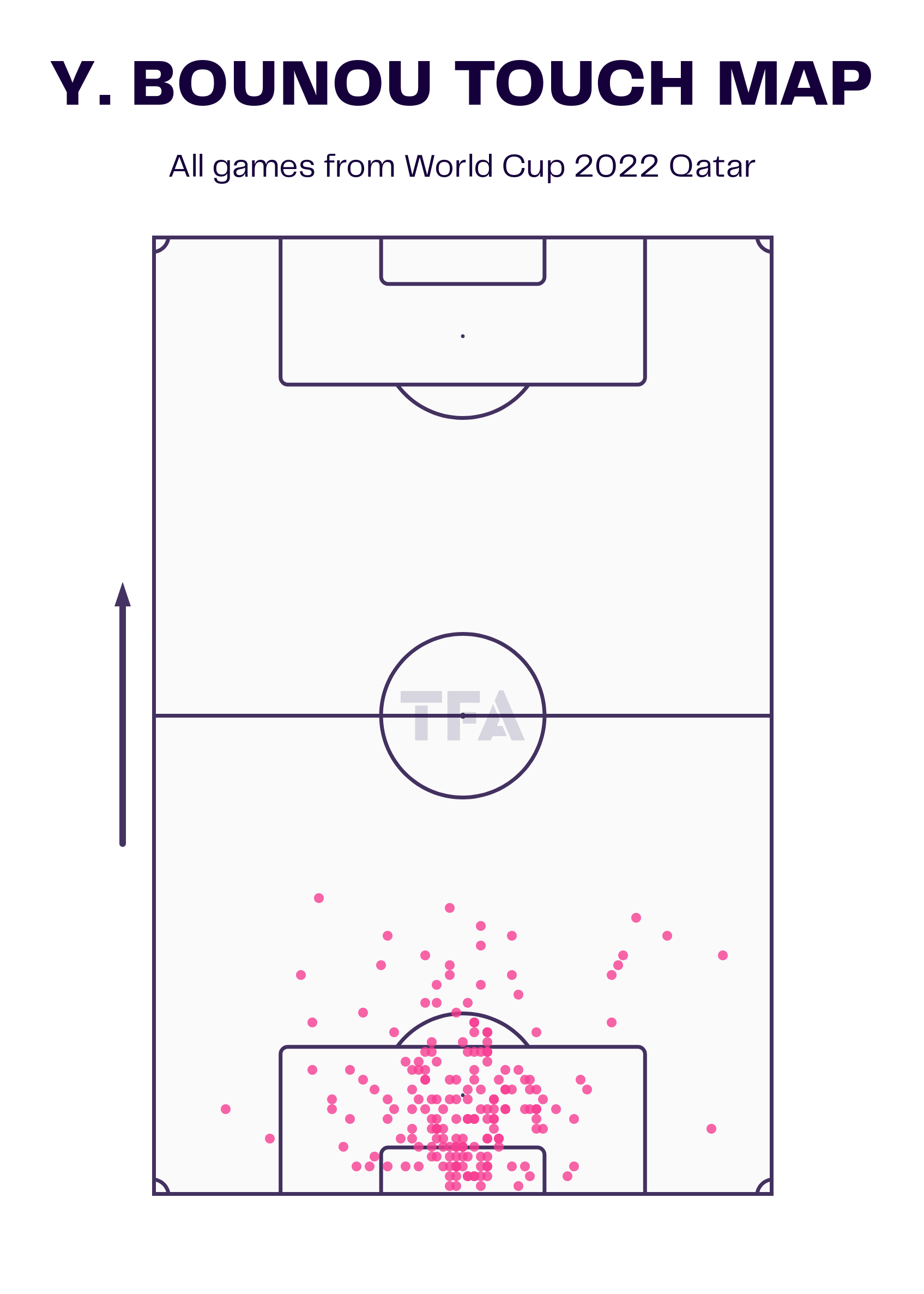 The above visual shows the touch map for Yassine Bounou in the World Cup. We can observe from the visual how mostly he remained in the penalty box. This makes sense, as Morocco mainly preferred to stay low and defend during the majority of all the games. They had an average of under 35% against Spain, Portugal, and Belgium. But we can also notice that he has come forward at times to collect the ball. 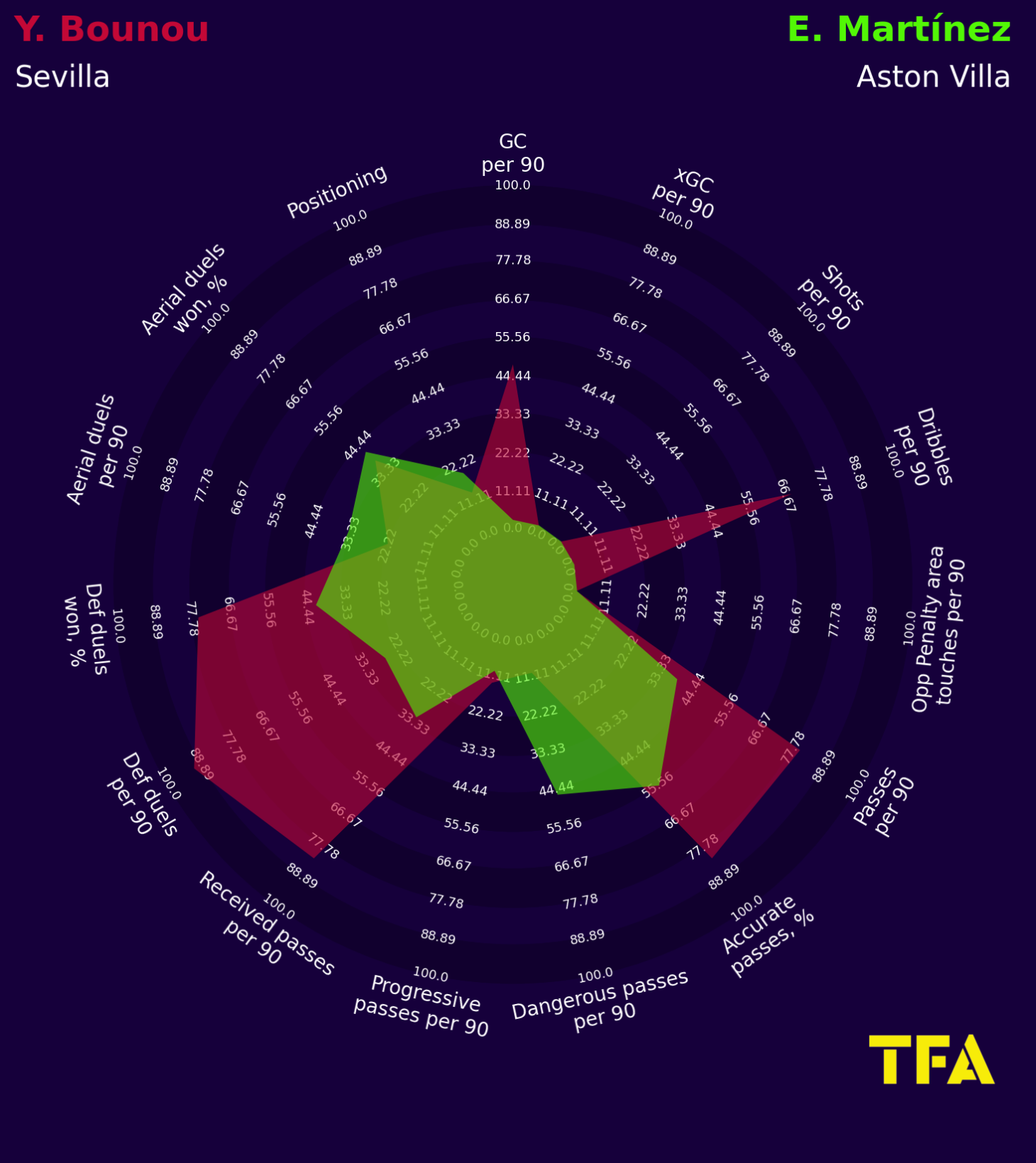 The above visual compares the radars of Yassine Bounou and Golden Glove winner Emiliano Martinez. Martinez was an important player for Argentina and made some big saves at crucial moments. Bounou has also been crucial for Morocco. From the radar, we can observe that Bounou does well in defensive duels and passing accuracy while Martinez does better in aerial duels. Both keepers were important for their respective countries and saved some crucial penalties as well.

Morocco’s story was utterly magnificent in all senses, as they emerged as dark horses and won everyone’s hearts. Yassine Bounou, with his crucial saves and his smile, won many hearts. He was crucial for Morocco in their historical campaign, and it won’t be surprising to see his value go up in the market.

Transfer Analysis: The stats that earned the Villareal forward a return...

The Stats: Espanyol and Villarreal draw in goalless game