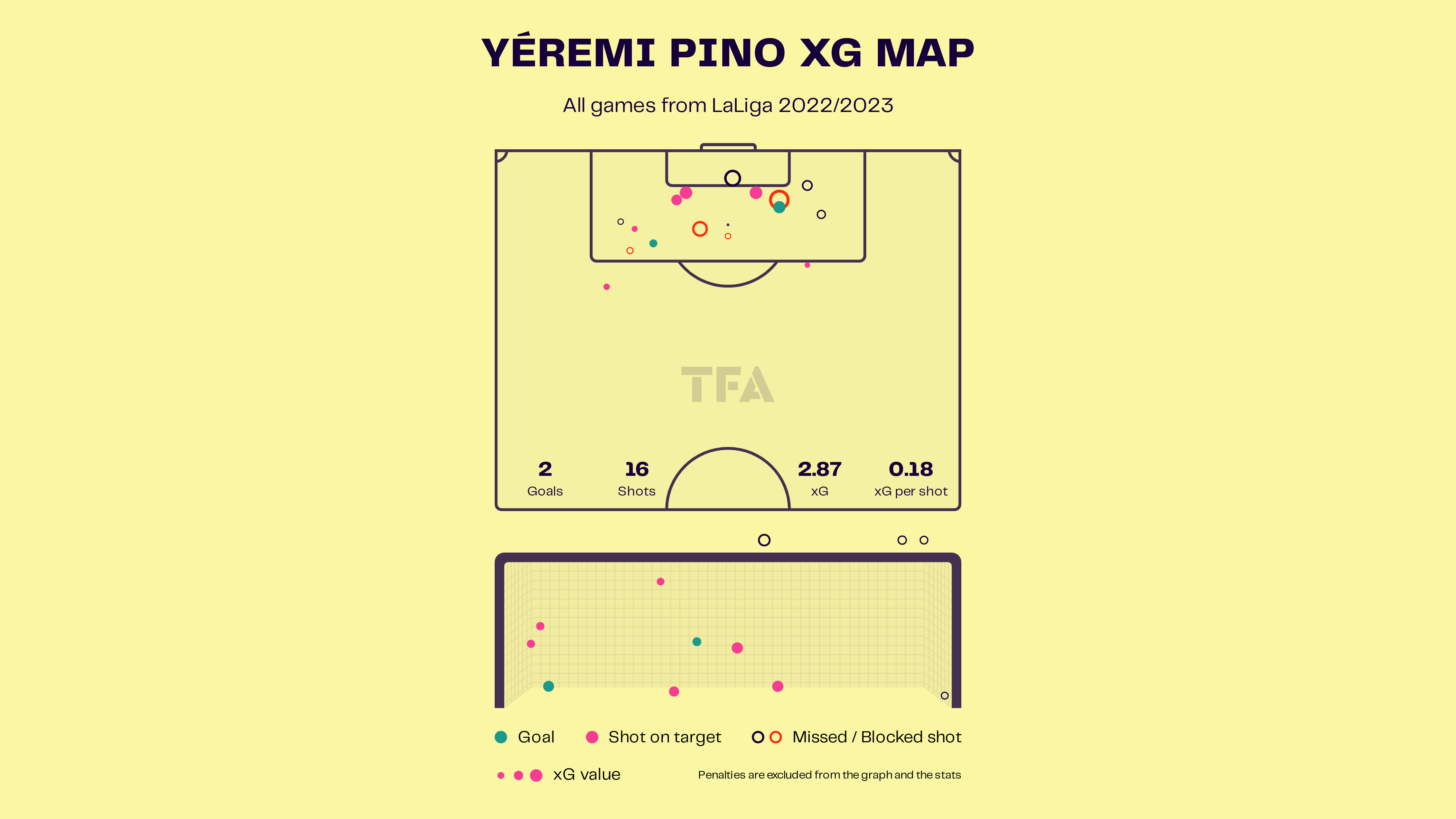 Villarreal has one of the most exciting young prospects in the form of Yeremi Pino. The youngster became the youngest player to win the UEFA Europa League in 2021 when the yellow submarines lifted the trophy. There were rumours that many big clubs wanted to sign the Spaniard, but he decided to stay at Villarreal. One of the most technically gifted players in La Liga, Pino can play all three positions in the forward line. He has all the ingredients to go on and become one of the best players in the league. Therefore, we look at some of his stats from the current season to understand why he will be a player to watch out for.

Yeremi Pino has made 15 appearances for Villarreal in La Liga this season. He has started 11 games and served as a substitute in four others. Pino has scored two goals in La Liga. 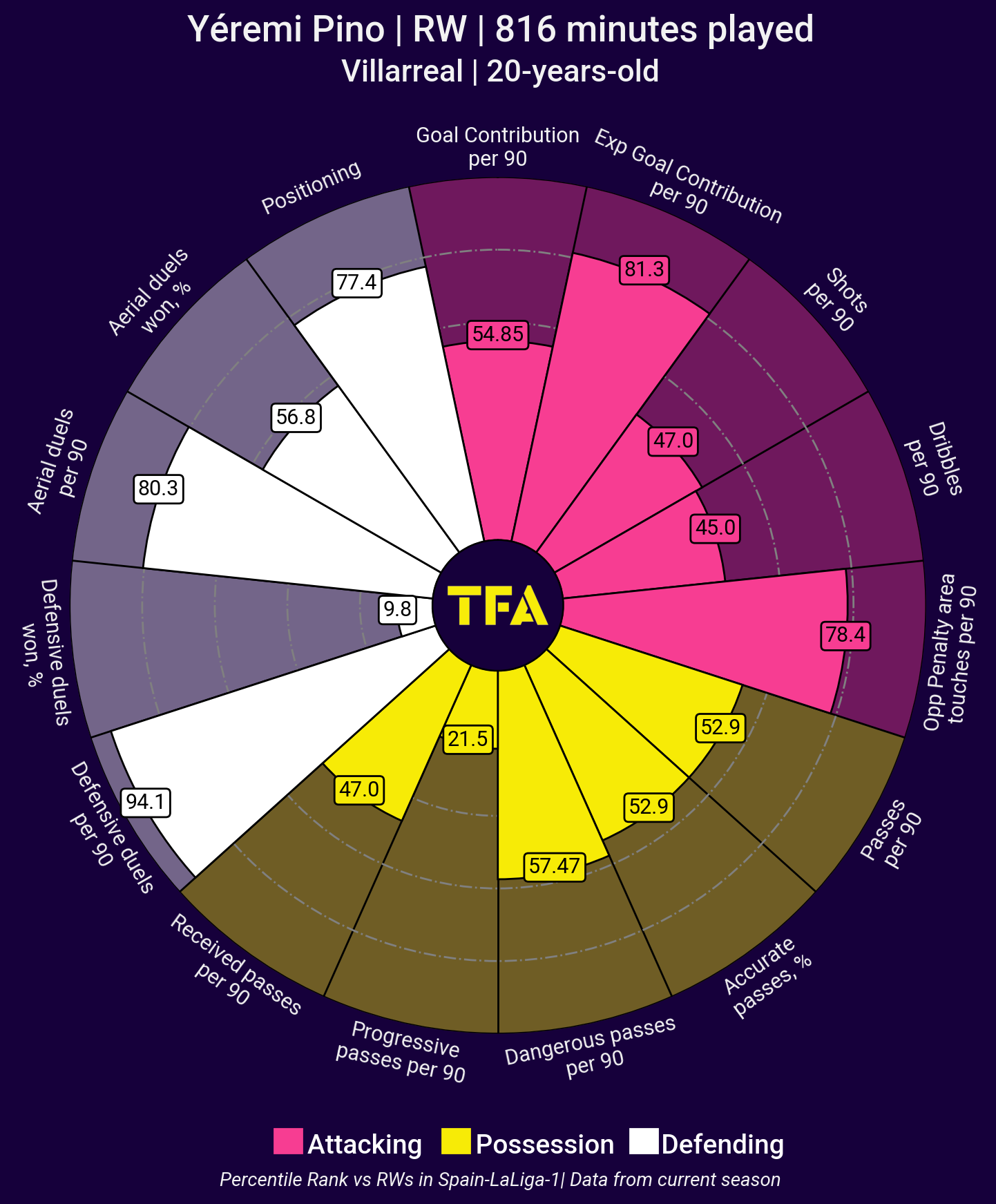 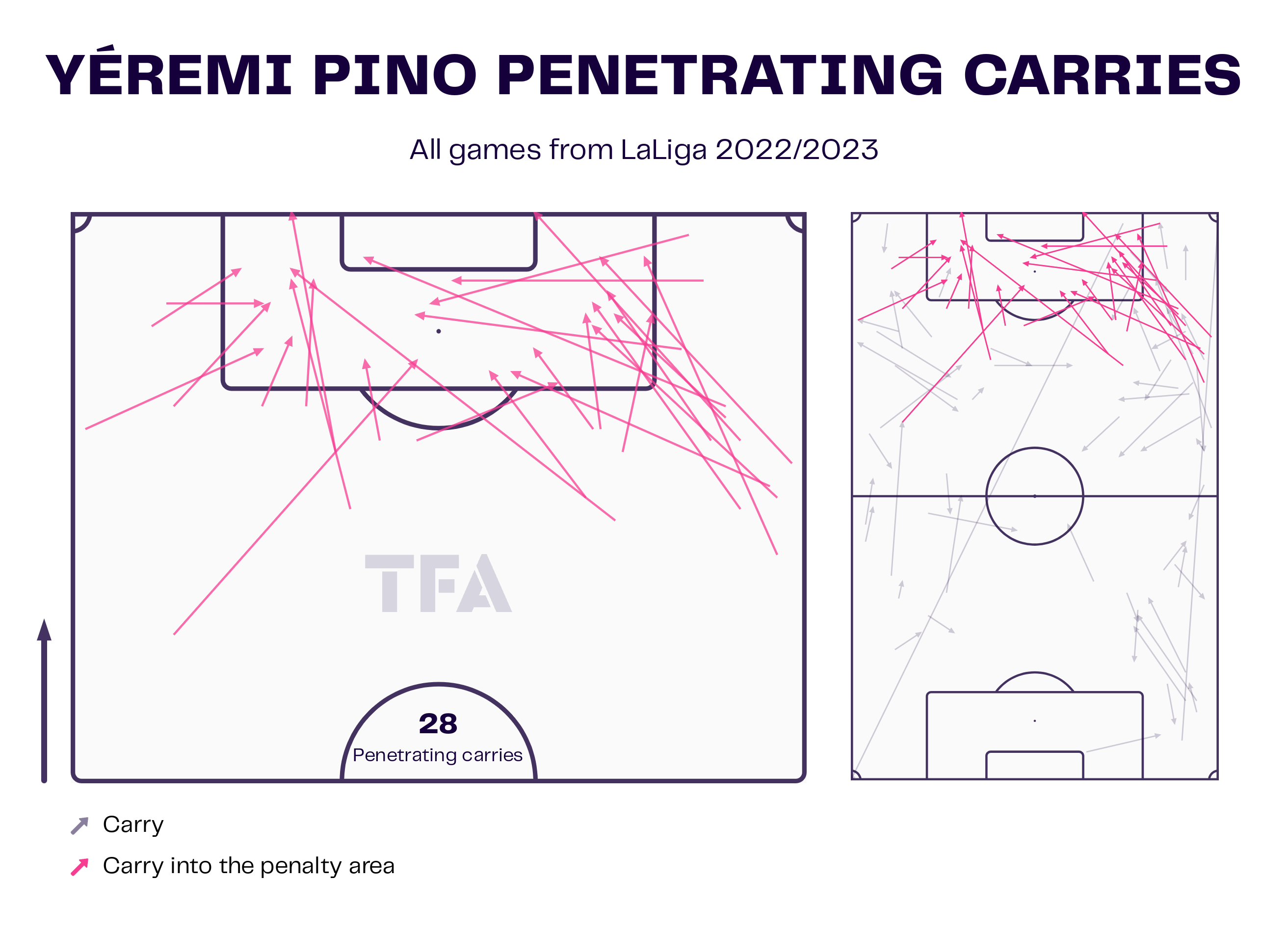 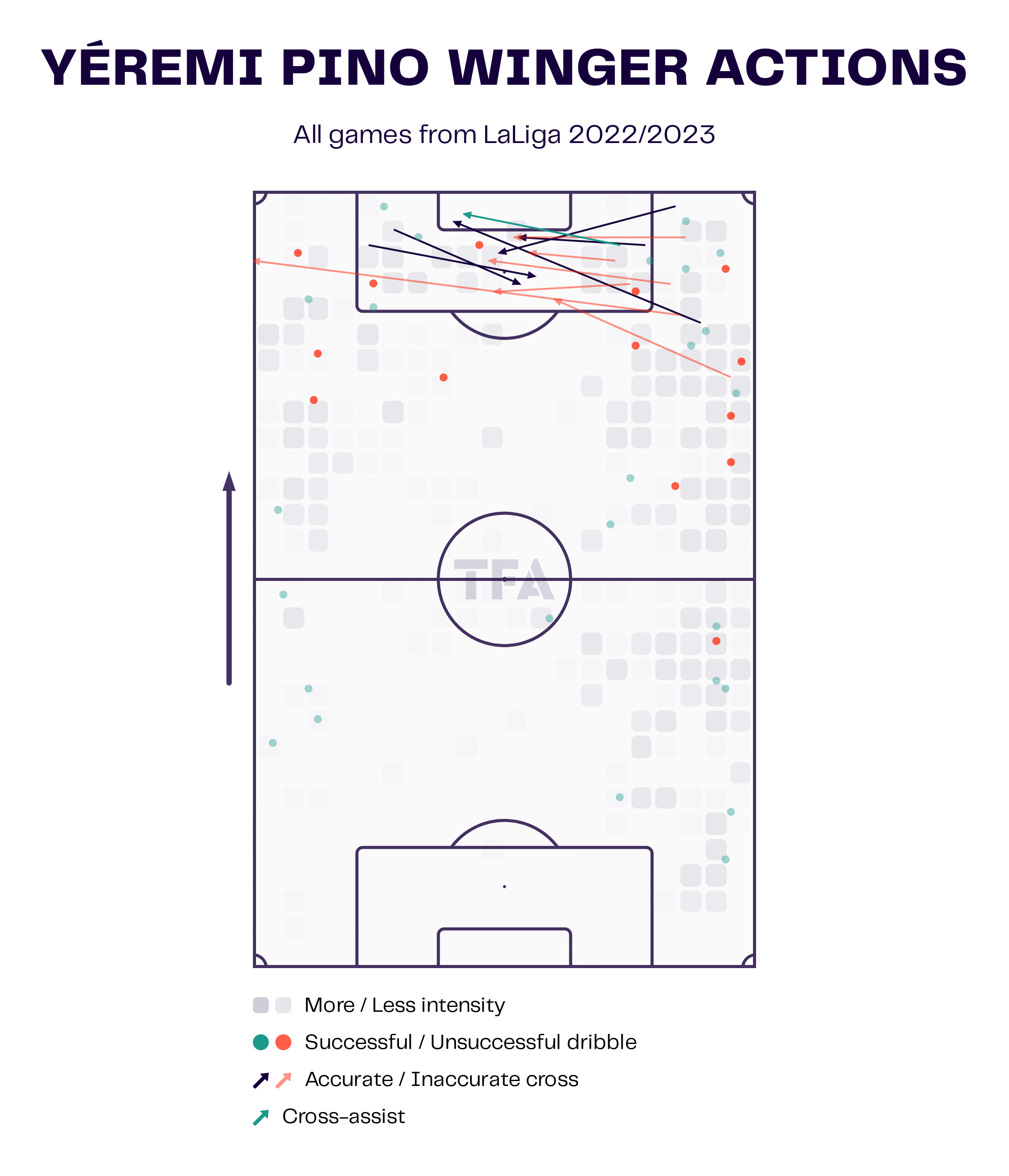 The above visual shows Yeremi Pino’s actions as a winger. He can play on either wing, where he dribbles past defenders and challenges. Pino makes an average of 9.34 offensive duels per game with a success rate of 49.5%. The 20-year-old also plays an average of 1.61 crosses per game with 37.5% success. 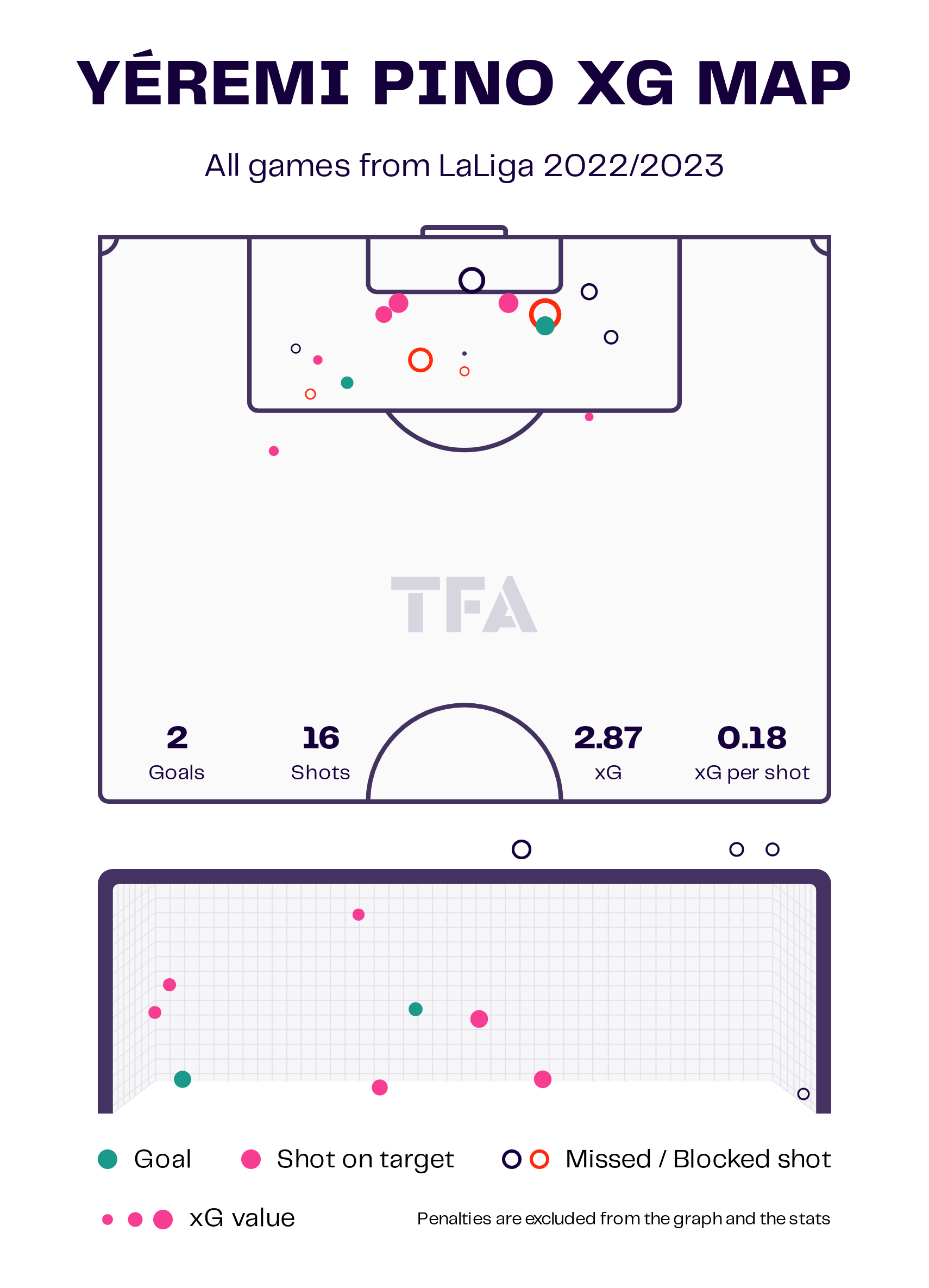 The above visual shows Yeremi Pino’s xG map from the current La Liga season. He has scored two goals in 15 matches. Pino has taken 16 shots this season, eight of which have been on target. He has attempted an average of 1.61 shots per game with 50% success. 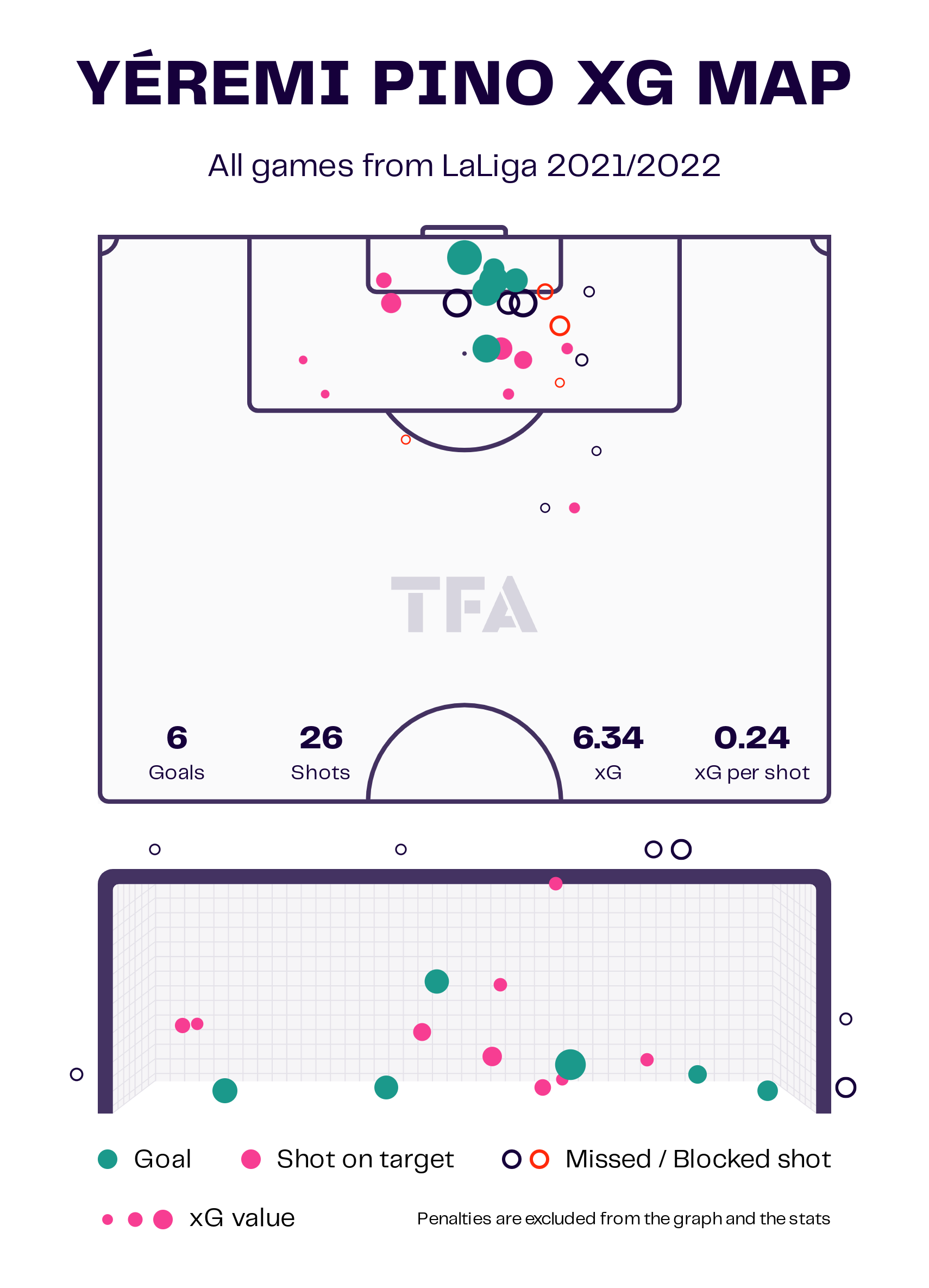 The above visual shows Yeremi Pino’s xG map from the previous La Liga season. He scored six goals in 31 games, averaging 0.3 goals per game. He tried a total of 26 shots, with 15 of them on target. Yeremi Pino played an average of 1.3 shots per game with 37% success. He has improved this figure, which tells us that he is shooting more, which is a good thing. 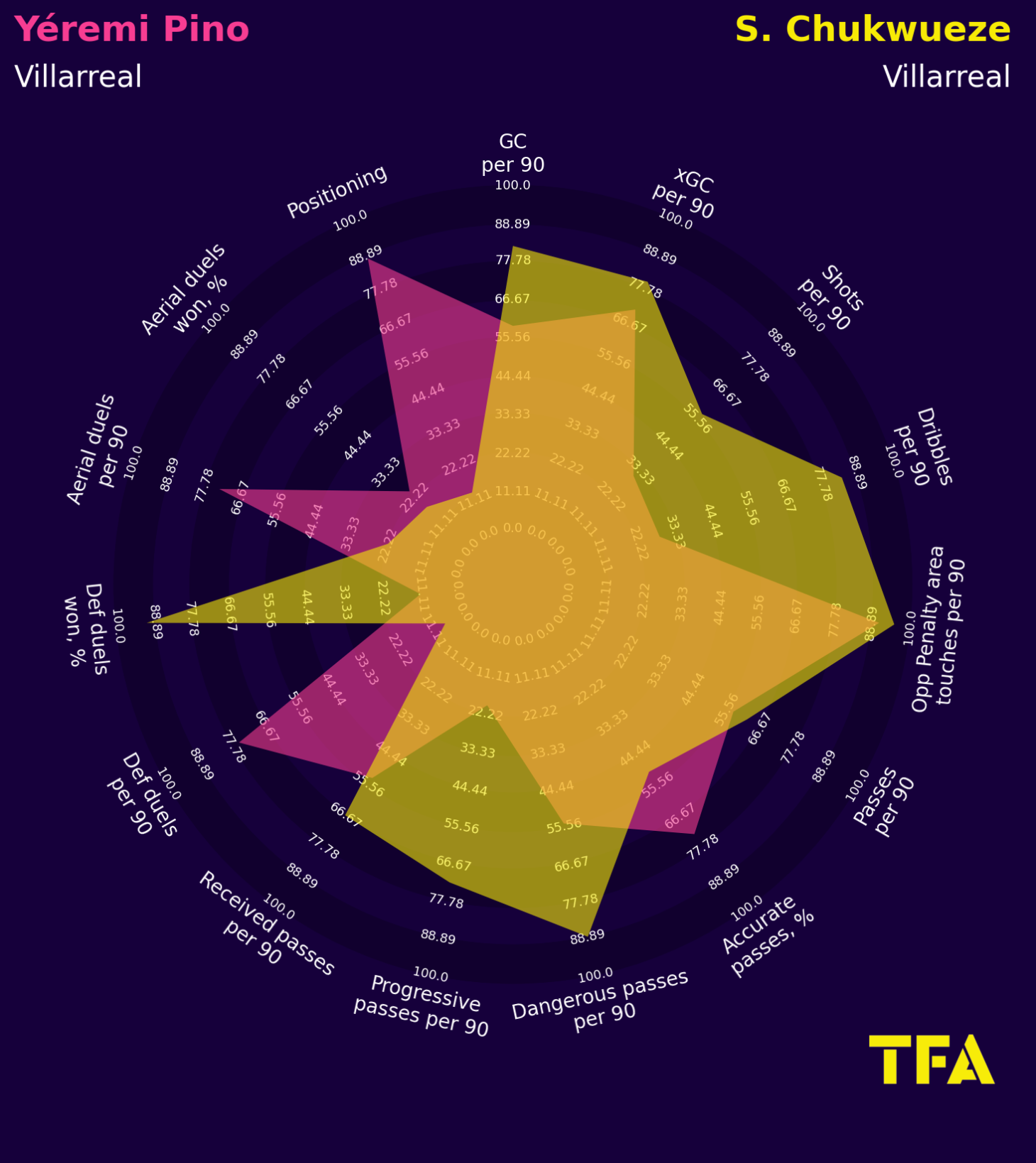 The above visual compares the radars of Yeremi Pino and his teammate Samuel Chukwueze. Both players play on either wing for Villarreal and are important players for the team. While Yeremi Pino has better stats in passing accuracy, defensive duels, and aerial duels, Chukwueze has better stats for dribbles, shots, goal contributions per game, and dangerous passes per game.

Looking at the 1×2 market, the odds for Villarreal are likely to be a bit lower as Yeremi Pino scored a goal in their last match and looks in form. Therefore, overlines are also expected to thrive slightly.

Yeremi Pino is one of the most technically gifted players in La Liga. His close ball control and incisive dribbling make him a hard player to defend against. The youngster, who rejected a move to Barcelona and other big clubs, is showing all signs of becoming a player to watch out for in the future.

“The future of Barcelona scares me a lot” – Perrin

Match Stats: Denmark lose away to England in extra time