This post initially featured on our comprehensive analysis site, which covers players, matches and more from around the globe – totalfootballanalysis.com.

When we talk about promising players that could become “something” in World football we can surely use the name of Andre Silva. The 22-year-old Portuguese already has some highlights in his career, like representing his country alongside his hero Cristiano Ronaldo and playing for one of the top Italian teams, Milan, at such a young age.

The youngster caught the eye of some of Europe’s top clubs in a time of a financial crisis at Porto, who undoubtedly took the lead in his decision to accept Milan’s offer and get out of trouble as soon as possible.

But his stay in Italy turned to be the low-light of his career so far. He went from scoring 24 goals in 54 games in all competitions for Porto, on to scoring only 10 in 40 games for Milan. After a frustrating first season for The Rossoneri, where he didn’t get Gennaro Gatusso’s trust and rarely was among the starting XI, he seemed quite lost and that immediately became evident on the pitch. The talented player everybody was talking about became insecure and couldn’t show a touch of his striking force.

It all ended up with him wanting to leave and which saw him head to Sevilla on loan – probably the best move for his unsteady career. And he definitely hasn’t taken it for granted. The low-spirited guy leaving San Siro with his head down became the phoenix rising from the dust and scoring a hat trick in his first competitive game for the Spanish side. And he didn’t stop there. He has already scored 7 goals in 10 games for Sevilla and is among the top scorers of La Liga. That’s how you prove the doubters wrong.

But let’s take a closer look at what has gone wrong at Milan and how he managed to fix it all at Sevilla:

Silva is not the greatest player – physically or technically, but he just has that football intelligence that every classic centre-forward should have. He is always where he has to be – in front of the goal seeking opportunities or creating some for his teammates. He is just a great team player, which could be seen by the connection with his teammates at Sevilla. They clicked straight away. He is not making a big deal of his goals – he just works hard and enjoys putting the needed work on the pitch. And most importantly – he makes it look effortless.

Silva scored a brace against Real Madrid for the team to win 3-0 at home and this has definitely put him on the map in La Liga. He positions himself perfectly so he could get the most out of the situation, no matter if it will be a short pass, cross or shot and is making the best out of his loan spell so far.

There is an undeniable improvement in his performance since he went on loan. His average shooting percentage has grown from 40.2% shots on target for Milan to 52.6% for Sevilla. He sends more accurate crosses now – 0.93 per 90 minutes, compared to 0.62 last season. He makes more progressive runs on average this season, but his dribbling success has dropped by 10% and he now dribbles past his opponents on 2.47 occasions on average.

A tremendous defensive improvement could be seen too. Andre is not the type of player to put in a lot of defensive effort. Or at least he wasn’t at Milan. He has a better rate for interceptions and clearances but he wins less defensive duels per 90 (2.92) than the previous season – 4.06. His passing accuracy percentage has dropped from 79.8 to 76.9 but he now delivers more through balls and accurate crosses

Through passes and crosses 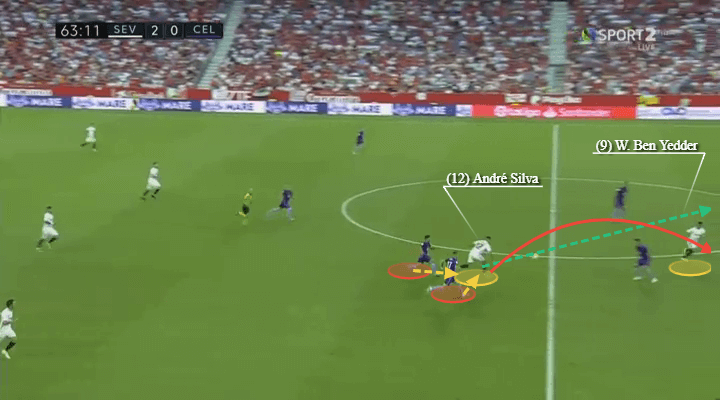 Before making this great under pressure through pass to Ben Yedder he received the ball with his back towards the goal and then made a quick turn so he can keep the pace and send a one-touch pass to his teammate. These movements prove crucial in moments of counter-attacks and make the offensive transition way easier. 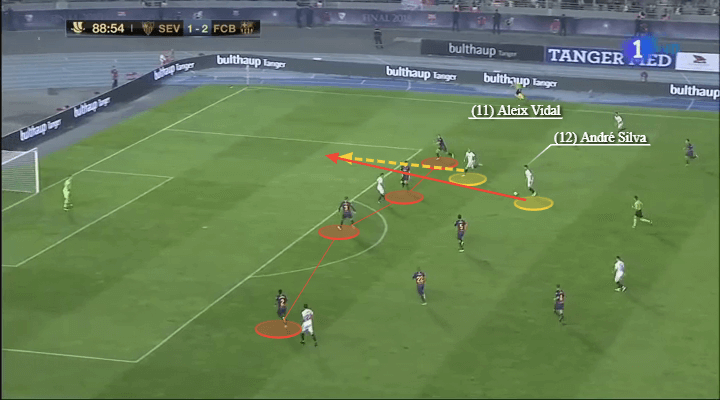 In the Spanish Super Cup game against Barcelona, he managed to find a way and attack through the perfectly structured Barca’s defence. As soon as he received the ball he tried to get it to the box so Aleix Vidal could finish the attack. 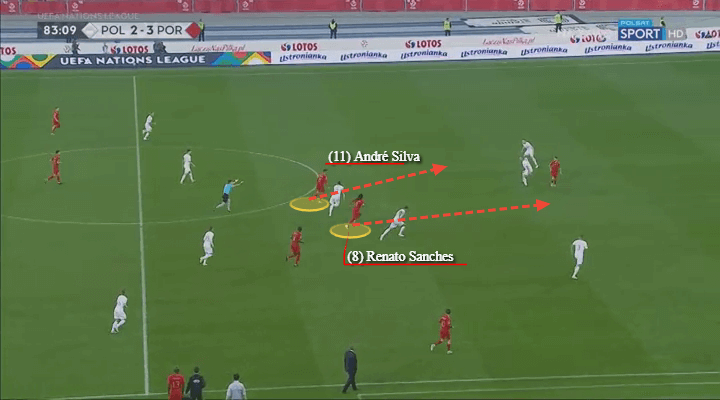 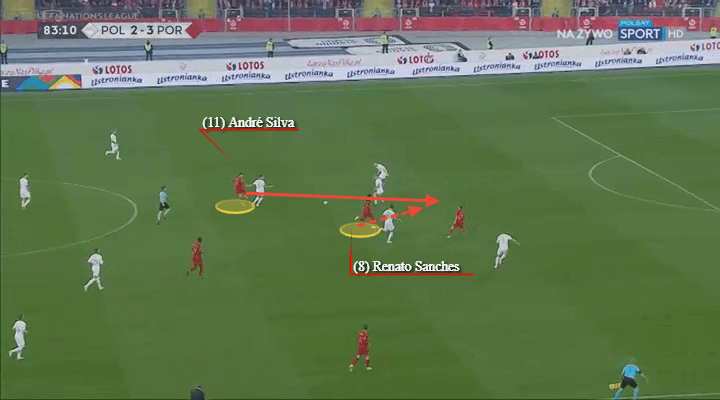 That’s what happened on the international scene. He made a great combination with Renato Sanches. While both of them were running forward and were man-marked, Silva decided to deliver to his teammate and sent a through ball while Renato was using his speed to reach it. He is doing good with the crosses too. Here he made a quick run to reach the ball, won the offensive duel and managed to keep the ball in play. He immediately turned and found Yedder without leaving the defender any time to react. This unpredictability and fast decision-making are the keys to his successful actions.

Most of Andre Silva’s goals come inside the penalty area. His strong decision-making and great positioning make him a great option on when the team counter-attacks due to his flexibility and explosiveness. He is equally good with both feet which makes him twice as dangerous as he is able to strike from almost every situation. That’s useful especially when he receives the ball with his back to the goal and has to find a quick solution and escape from a defensive duel. 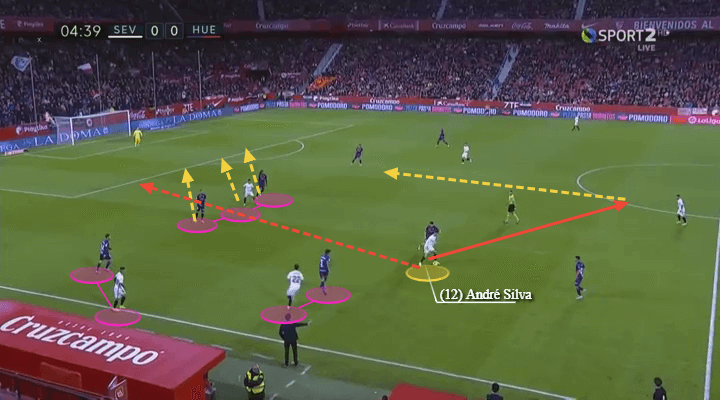 He made a turn and won the offensive duel so he can pass the ball. As soon as the ball left his foot he started his off the ball movement, was left uncovered and managed to sneak to the box. 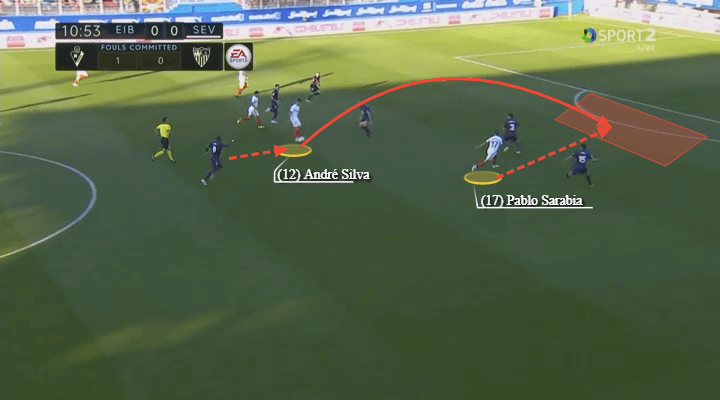 Another moment where he showed his strong vision and his importance for Sevilla’s frontline.

His most common position is as a lone striker, but he can either be used in a two-man forward line or to be the one behind the centre-forward. Actually, the manager Pablo Machin is mainly using him next to Ben Yedder, although he is experimenting and applying different formation, and it turns out to be a great partnership. He is always there to contribute in the attack in the best possible way but his off the ball actions are even more impressive.

Silva looks to be loving life in Spain so far and it looks like he would love to stay if Sevilla would be willing to pay €35m for his buyout clause. The team is competing with Barcelona, Atletico Madrid and surprisingly Alaves for a top 3 spot and Silva is the one to bring the difference in their performance. He seems humbled and grateful for the opportunity to feel the joy of playing regularly:

“I feel good on the pitch and out of it. I have to thank my teammates and the coach. I have no answers to explain what happened with The Rossoneri last year but I know that this year I finally feel good and want to score more goals and win as many games as possible. I knew that at this club I would have found a great team, with total confidence from everyone.”

The importance of a CDM at Real Madrid: Tactical Analysis