This article originally featured on totalfootballanalysis.com, our site dedicated to in-depth analysis of players, matches and more all across the globe.

In the fourth round of the Europa League group stage, AC Milan travelled to Spain to face Real Betis. After their defeat in the return leg in Milan, Gennaro Gattuso’s team wanted to get their revenge against Quique Setién.

Under Quique Setién Real Betis have developed into one of the most interesting projects in Europe. Their positional play is on a remarkable high level which allows them to dominate most opponents and is a joy to watch. In the first leg, the team from Sevilla dominated Milan in their own stadium with constant ball movement and quick counterpressing. The team coached by Gennaro Gattuso still tries to find their playing style while fighting to get closer to Italy’s top teams. That’s why Milan do not focus heavily on the Europa League, however, they still want to get to the next round. Consequently, they tried to win in Sevilla but again got dominated in the first half. After a better second half, they walked away with a draw. Real Betis has to blame themselves for missing big chances and losing control of the game in the second half.

Milan with a different plan

Compared to the first leg in which Milan had no chance defensively, they changed a bit this time and wanted to stop Real Betis with a mixture of 5-3-2 and 5-2-3. Their main goal was to block the centre and therefore cut the connections between Real Betis players inside and outside of Milan’s defensive shape. The 5-3-2 usually allows a team to control the six-space which is crucial during the build-up. Milan’s plan was to force Betis to the wing by blocking the passing lanes to Betis midfielders Carvalho, Canales and Lo Celso. But, Real Betis’ positional play and the specific role adjustments of Quique Setién helped Betis to overcome the pressing of Milan.

As always, Betis build-up with their back-three. The wingbacks pushed higher while Carvalho and Canales supported the ball circulation. Whereas Carvalho positioned between Milan’s strikers, Canales moved towards the right halfspace or touchline. Therefore, it was hard for Milan to press him because Betis knew how to open up space for their playmaker. 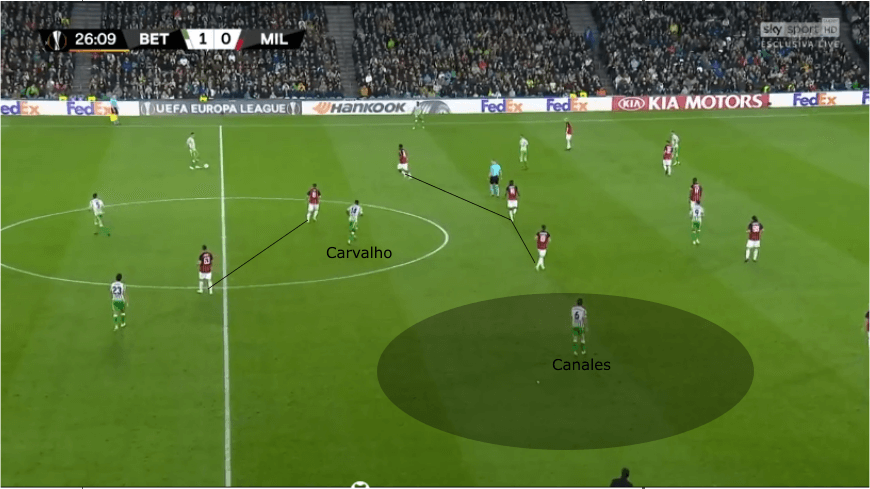 Although the 5-3-2 is very compact in the centre it offers the opponent space near the wing which is usually no problem because the wing is the strategically worst zone. However, Betis moved the ball so well, that they could free up Canales in the right halfspace from where he found diagonal passing lanes in the centre.

By using certain principles of the positional play, Betis were capable of moving the ball and Milan’s defence which opened space for Canales. Quite often, they circulated the ball in the first line and tried to find Carvalho between the lines. The Portuguese midfielder either passed the ball back to the centre-backs or to Canales on the right side. The goal was always to attract opponents and therefore opening space for Canales.

After freeing up either Canales or one of the wingbacks, they tried to attack diagonally into the centre. By building triangles and supporting the ball carrier, Betis could circulate the ball quickly and find their players between the lines. Most of the time Sanabria was the lonely striker who got supported by Lo Celso and Joaquín in the halfspaces. While Joaquín stuck to his position, Lo Celso had more freedom to move out of position and was often the key to overload certain areas. 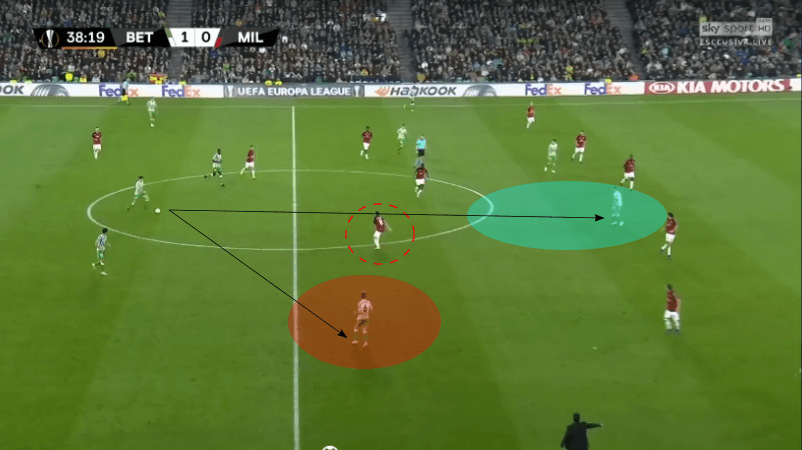 Betis not only found a way through Milan’s pressing through the wings but also through the centre. The position of Canales caused problems in the pressing when Betis managed to overplay the first line. Then, Betis had positional superiority. In that scene, the left central midfielder of Milan can either close the passing line to Joaquín or the one to Canales. As a consequence, Bartra just has to react to the movement of the opponent to decide which pass he should play. Both passes lead to dangerous attacking situations for Milan.

The well-structured positional play of Betis enabled them to get behind the midfield line of Milan. From there, they tried to regularly switch sides and open the wings for their forward-pushing wingbacks. Especially, on the wings, Milan had communication and responsibility problems. They often messed up the rotation when Joaquín or Lo Celso were positioned between halfbacks and wingbacks of Milan’s back-five during switches. Those problems were easily observable at the one goal Betis scored on this evening. 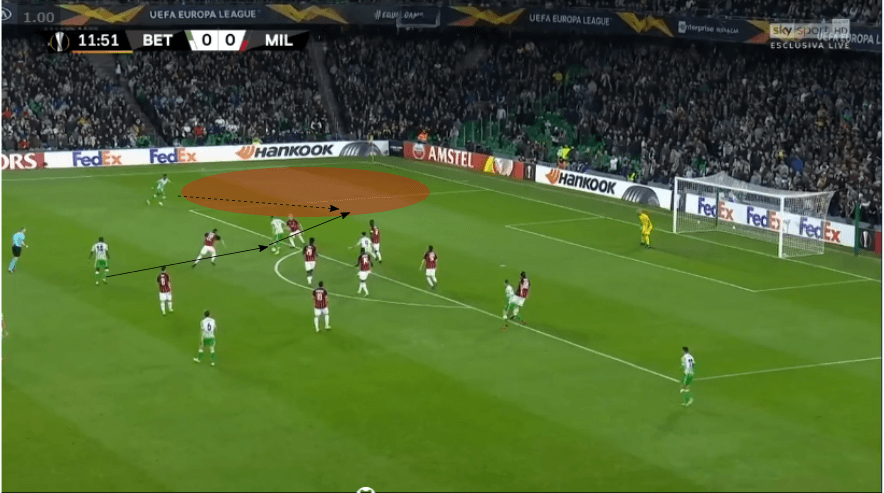 Betis switched from Tello, Canales and Carvalho from the right to the left side. Carvalho played a pass to Joaquín. Now, Milan had the problem who should press Joaquín? In this scene, Borini decided to do that which was a mistake. However, one of the centre-backs of Milan stepped out of the line to press. Consequently, Zapata had to stay with Sanabria and Betis could perfectly use the numerical superiority to get behind the last line of Milan. Junior’s perfect cross found Lo Celso who scored.

One of the problems of Milan was the lack of intensity in pressing. They never really pressed the build-up of Betis. Against a team, which moves the ball that well, it is not enough to close the centre because as we saw above, Betis have the instruments to get you out of position and create superiorities.

For beating Betis, a good high pressing is often required. Pressing high as the advantage that Quique Setién’s team has to think first about playing out of the pressing. It was quite often observable that by pressing Betis higher you could destroy their rhythm. With a man-oriented 5-2-3 pressing Milan were capable of doing this as well. 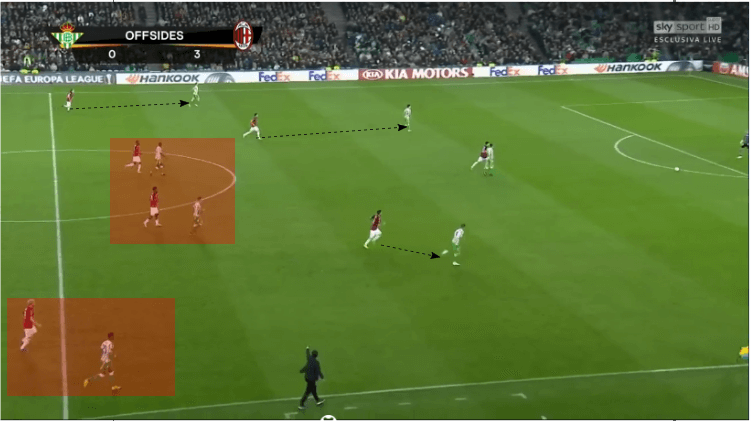 With the man-orientations Milan could immediately apply pressure and force Betis into uncomfortable zones. However, Betis’ positional play was still really good, and they found a way through the pressing by moving the ball. Behind the midfield of Milan was often enough space available to attack. However, Quique Setién’s team regularly tend to lose their good positioning when they play out of a high pressing. Either they attack too fast or the rest of the team pushes forward too slowly. Thus, their positioning for the counter-pressing is not always perfect, we could observe this in that game as well. The whole game developed into a more open game. Milan had more possession and created chances of their own.

Betis were the dominant team in the first half and controlled the game against Milan’s passive 5-3-2. Due to the missing of good chances and the loss of control in the second half, they have to blame themselves for not winning the game. However, they looked like the better-developed team with a clear plan in possession. Milan, on the other hand, showed glimpses of good behaviour in possession, but Gattuso has to work a lot harder to develop this group of players into a top team.

“I need to play”: Midfield maestro disappointed with treatment at Barcelona