The quarter-finals of the Copa del Rey drew Espanyol and Betis with each other. The first leg at Estadi Cornella-El Prat proved to be a very interesting encounter which ended in a 1-1 draw, giving Betis a slight advantage going into next week’s second leg.

In this tactical analysis we will look at two tactical trends supported by statistics. First we will have a look at how Espanyol‘s formation played into their game plan of playing high through-balls and following through. Secondly we will focus how Betis’ formation had the intention of a dominant style of play, but were rewarded only late in the game with a counter-attacking style of football.

Espanyol’s 4-3-3 with high through balls

La Liga‘s seventh and 13th placed teams battled it out for a decent position for the second leg. It was quite interesting how both teams set up their formation in this game. Joan Francesc Ferrer Sicilia’s outfit started in a rather conservative 4-3-3 formation which didn’t change throughout this Copa del Rey match. 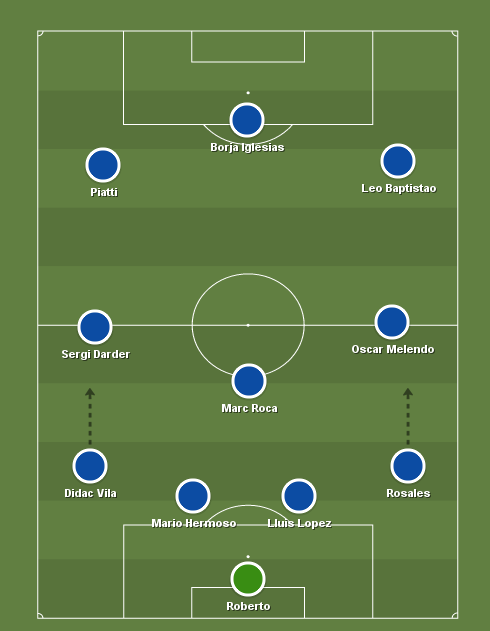 While on paper it seemed like a 4-3-3, Espanyol started to play in a 4-1-2-3 formation. This could be seen because Marc Roca dropped down to play in front of the defence, and Sergi Darder and Oscar Melendo formed a high-lying block in midfield to support the three strikers upfront. In attack it was expected that Didac Vila and Rosales would run down the line and produce crosses for the front three.

In reality this meant that Didac Villa played high up his own half when Espanyol were in possession of the ball and were trying to build up an attack, as you can see above. The same thing was occuring with right back Rosales, who would also play high up.

Because of the runs both full-backs made, the positioning of the players in the formation altered as well. Center-backs Mario Hermoso and Lluis Lopez played in the middle of their half, with the full-backs pushing on almost in their opponents’ half. 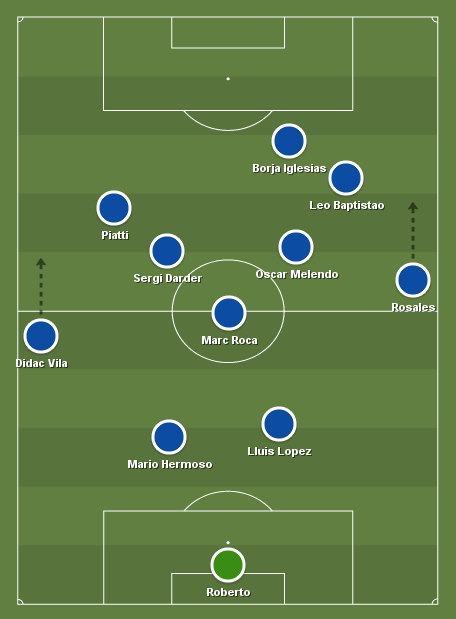 Above you can see the actual positioning of the players during the match and you can see that the full-backs have pushed on. The second thing is that those full-backs got a lot of room to manage their runs, because midfielder Sergi Darder, Marc Roca and Oscar Melendo stayed in the centre of the pitch. The midfielders and strikers drifted a bit to the right, which was the result of crosses from the left.

Playing high through-balls was the key to the attacking danger of the hosts. The strikers got in the right positions and made their movements towards the penalty spot. To reach them, Espanyol had two options, made possible by the high-positioned full backs. One option was to play a cross from midfield, as Sergi Darder does in the image above.

The second option – as shown above – was the cross made by the full-back to reach the incoming strikers. Didac Vila puts in the cross and Borja Iglesias and Baptistao are closing in. Also right-back Rosales is moving into the penalty area.

How the players made the movement forward was very important. Even after a cross was headed out, the players were ready to go forward again. This time, the midfielders collect the ball and pick out a player going forward.

The anticipation of the strikers made them dangerous in front of goal. In the image above you can see the movement of Piatti and Borja Iglesias towards goal.

The constant movement towards goal by the strikers and the midfielders left Espanyol with a great number of chances. This style of play was rewarded in the 27th minute when they scored.

Quique Setien’s outfit had a different approach to the game and started with a 3-5-2 formation with Sanabria and Loren Moron playing up front. With their five midfielders they wanted to dominate the opposition with their characteristic possession-based style of football. 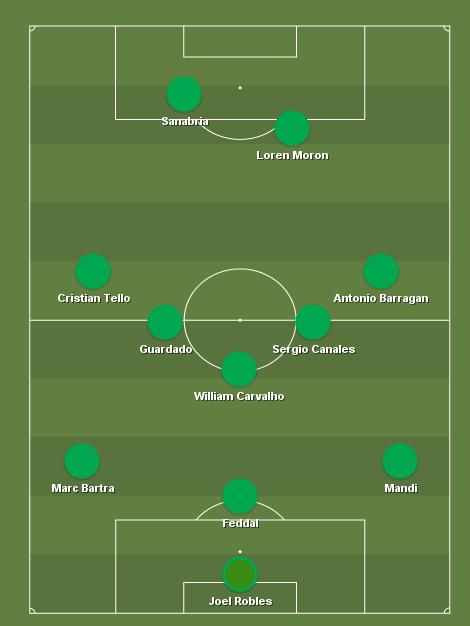 Betis wanted to dominate the midfield and create chances from that possession. They had 61% possession of the ball, and they tried to get through the tough Espanyol defence, through passing. Their passing remained mostly horizontal and not vertical though, as can be seen on the image below

The away side had 645 passes during this game, which is almost 200 more than Espanyol. Betis didn’t take advantage of those  passes and couldn’t reach the final third as they would have hoped. The amount of passes that got in the final third was 53, but only 38 of those passes were successful. Sanabria was quite isolated and didn’t get many balls, nor did Loren Moron. He dropped into midfield several times in order to receive a proper ball.

Their inability to reach the final third frustrated them and after 27 minutes, they were trailing Espanyol 1-0. They needed to find a way to get through the Catalan defence. Betis turned their dominant style of play into a counter-attacking style of play.

In the 80th minute Betis made a change and brought on Lainez for Cristian Tello. This meant that Guardado would play as a wide midfielder and Lainez would play in central midfield. Lainez made an instant impact, bringing more pace to the game. With the change of style their counter-attacking was swift and successful.

Betis have pace and because of it find themselves in a 3v3 counter-attack situation. Former West Ham target William Carvalho takes the ball and storms forward with two passing options; to Sanabria or Loren Moron.

Loren Moron gives the ball to Sanabria, even though there are three Espanyol defenders. Because of the speed of this very direct counter-attack, Betis were able to be very threatening in the final third and Sanabria scores the equaliser.

The match between Espanyol and Betis was very interesting. Both teams had different styles of play which ultimately gave them each a goal. The high through-balls and player anticipation following them were the basis of the goal of Espanyol. Betis struggled to get to the final third, but after they changed to a counter-attacking style they were successful in getting the equaliser.

If you love tactical analysis, then you’ll love the digital magazines from totalfootballanalysis.com – a guaranteed 100+ pages of pure tactical analysis covering topics from the Premier League, Serie A, La Liga, Bundesliga and many, many more. Buy your copy of the January issue for just ₤4.99 here, or even better sign up for a ₤50 annual membership (12 monthly issues plus the annual review) right here.