Having demolished the Kashima Antlers, Real Madrid won the Club World Cup final by seeing off host side Al Ain in the final in Abu Dhabi. Santiago Solari’s side rarely got out of first gear in a comfortable win over the side from the Middle East, with strikes from Luka Modric, Marcos Llorente, Sergio Ramos and an own goal leading to a 4-1 win. Here, our tactical analysis will use statistics to identify what key points Real Madrid can take from the game as they won the Club World Cup for a third consecutive time.

After a hat-trick in the semi-final, Gareth Bale’s confidence was flying and it was clear for all to see. Solari has given Bale more freedom in attack, allowing him to return to the left-hand side where he feels more comfortable, after months of being deployed on the right. With this freedom, the Welshman roamed around in attack, dropping deep and looking to make rapid runs which simply blew away the opposition defence who could not keep up with his pace nor movement.

In the final, Bale could not add to his three goals from the semi-final, but he still collected the award for the best player of the tournament. He came close to notching though, with an xG of 0.97 and many opportunities that some would feel he should have done better with. It was promising though, to see Bale get into the right positions and make runs which he has not been making in recent weeks. Whether that was down to injuries or lack of motivation, only he knows, but against Al Ain, he was far more active in making those quick dashes which can tear opposition backlines apart. 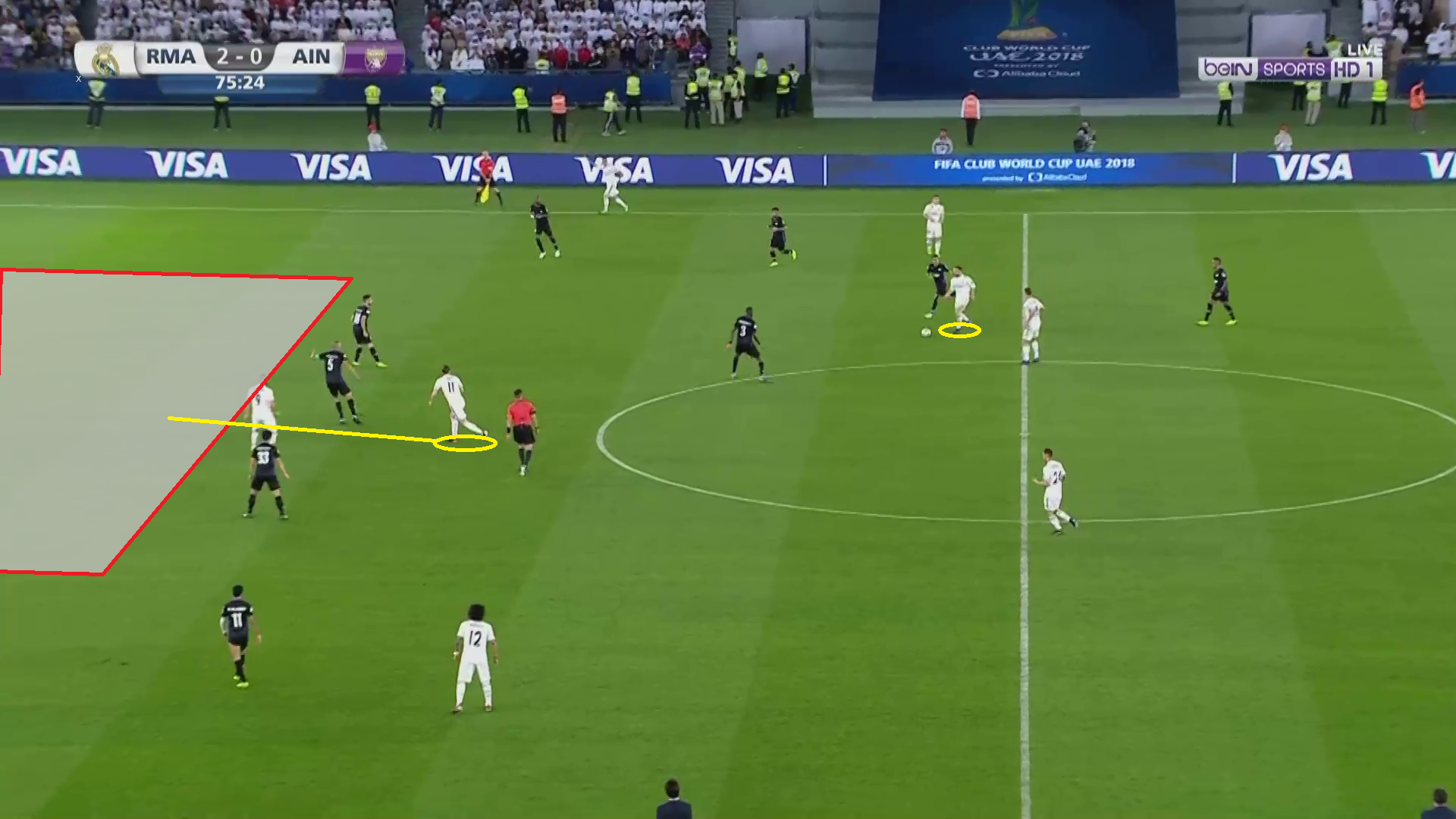 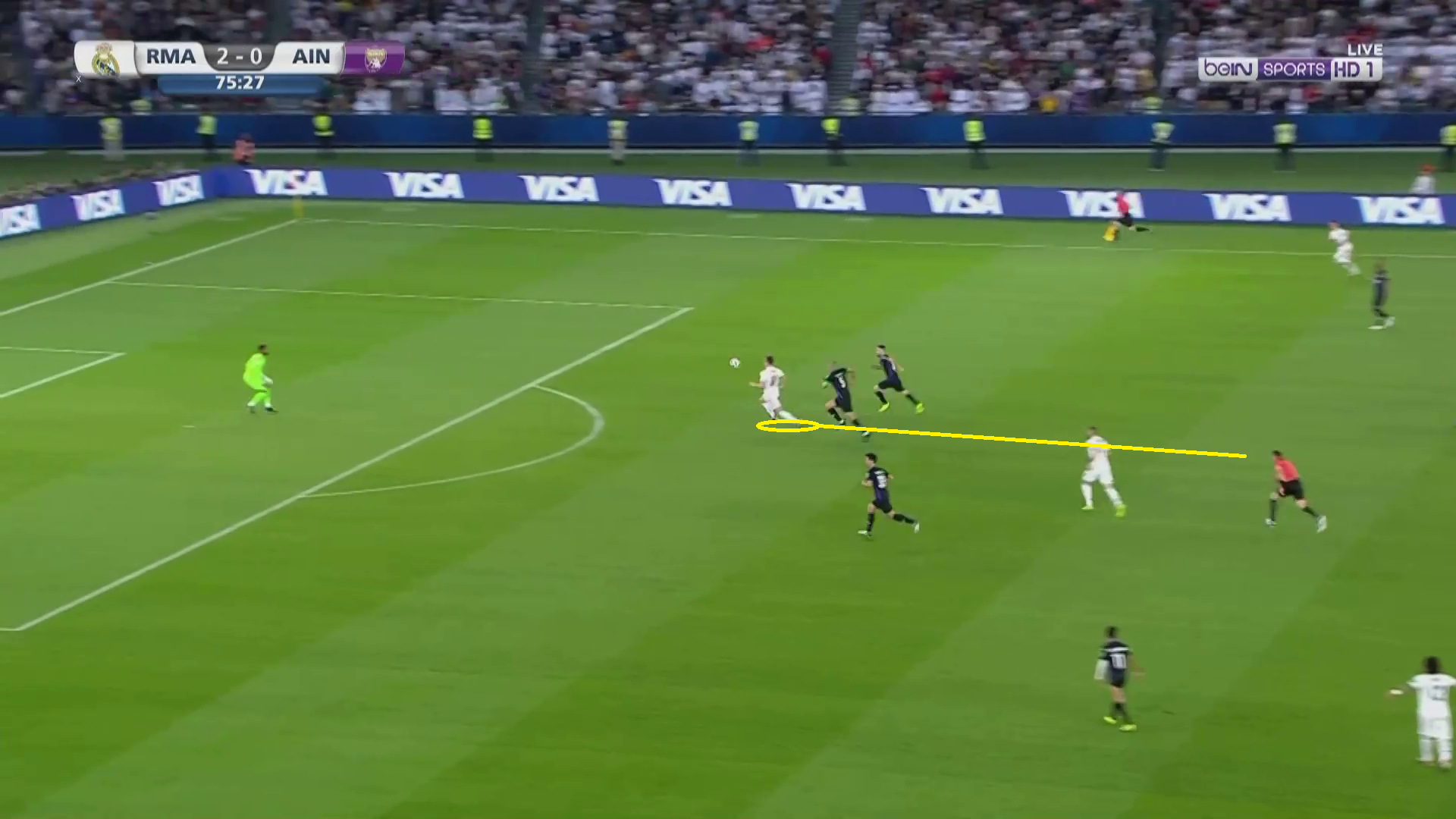 Only once in the past three years has Bale achieved more than the 12 touches in the box that he recorded against Al Ain, and that kind of desire and involvement is exactly what has been lacking. Real Madrid need a focal point to lead and be daring in attack. After an anonymous few months at the Estadio Santiago Bernabeu, he finally appears to be at his best. He may be ruing the arrival of the winter break just as he finds form, but building consistency in 2019 is now Bale’s next big challenge.

And he is the key to success

Getting the most out of Bale on the left is crucial to Solari finding success with Los Blancos. In the final against Al Ain, 54% of attacks came down the left flank. It is the first time in the new coach’s era that so much of play has come down a single flank, but it showed how he is finally getting the best out of two of the team’s most maligned players in Bale and Marcelo. Albeit against an opponent who did not capitalise on the Brazilian’s defensive frailties, this performance is exactly what Solari will be hoping to see more of.

This game saw Marcelo make more dribbles and attempt more shots than in any other clash since October, without stepping on Bale’s toes in front of him or forcing his team-mate to drop to cover. With Bale drifting more central, Marcelo could drift forwards and then play balls into Bale, rather than closing their own spaces. As Karim Benzema dropped deep into a more playmaker role, it was clear that Solari’s jigsaw was finally coming together as the pieces fluidly moved around. 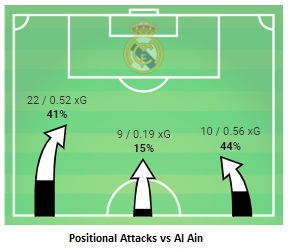 Against Al Ain, there was no need for so much defensive protection though. Marcelo could bomb forward down the flank and get away with it, rarely being caught on the counter, even if Bale was caught out too. In La Liga and more competitive fixtures, that will not come so easily. Finding the balance between them will be essential, though this Club World Cup final reflected the power that Solari has at his disposal when he needs to bomb forwards with all that Real Madrid have got in the hunt for a win.

Llorente wants to make the shirt his own

Casemiro was back in the squad for this Club World Cup tournament and it was expected that he would begin to rack up some minutes as he builds towards full fitness. The issue for that was the form of Marcos Llorente, who continued to boss the midfield and not only scored his first goal for the club in the final against Al Ain, but also achieved 97% pass completion rate and proved to be as efficient as ever both on and off the ball.

Llorente roamed around the middle of the park freely, making a total of six dribbles as he thrived with the added time on the ball. When his team appeared to be easing off having taken the lead, it was Llorente who would pick the ball up in a deep position and drive forwards. That is what a midfield destroyer like Casemiro lacks. In having such a clear distinction between the two, Llorente has made it clear why he would be an improvement, rather than an alternative. 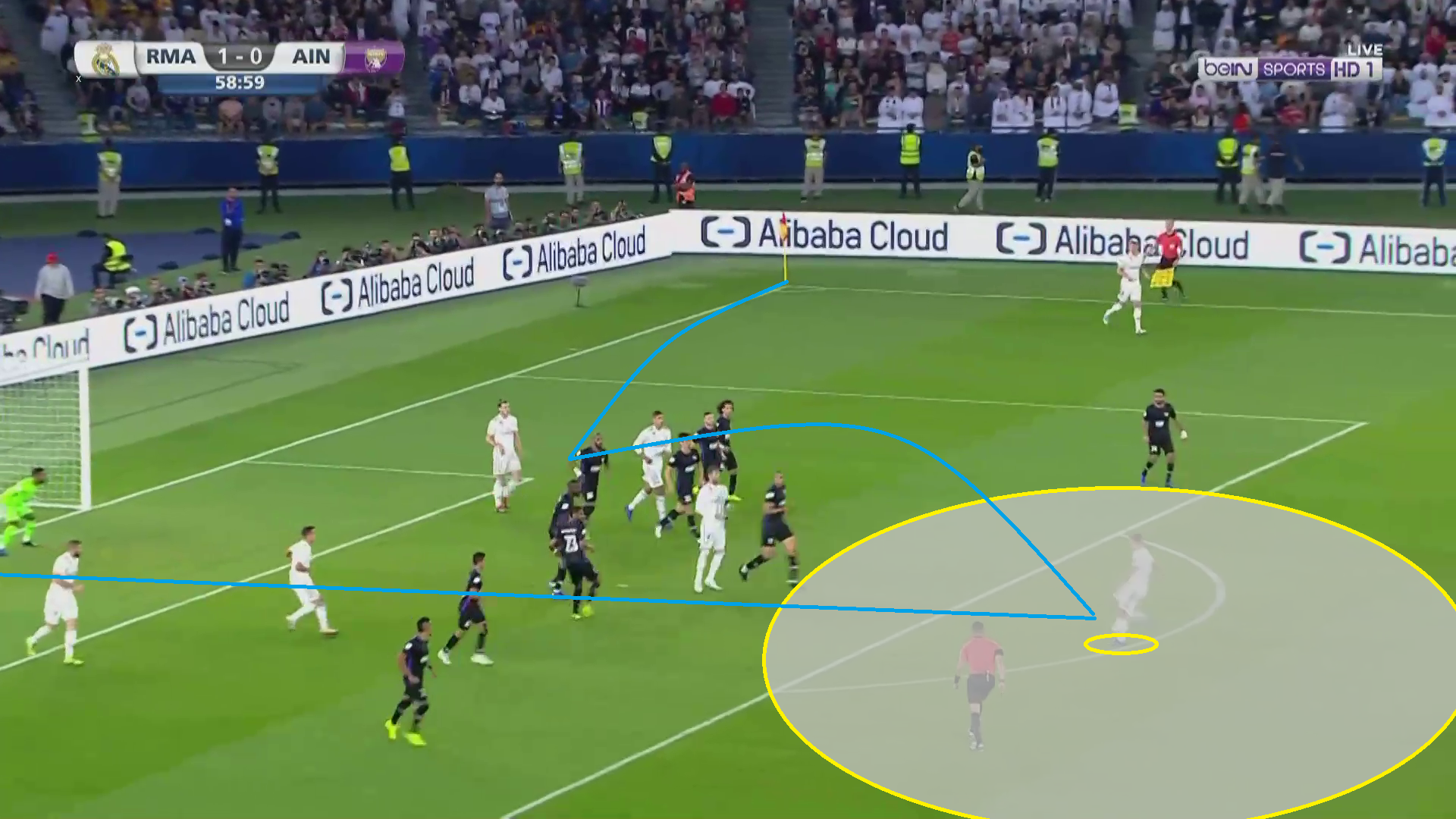 When the chance did come his way to score a memorable goal, he didn’t think twice. Waiting on the edge of the box as a corner was swept in, he was in acres of space but still took a composed and expertly executed volley to double Real Madrid’s lead on the hour mark. That goal finally made it comfortable for the reigning champions and helped to lift the pressure off the shoulders of his far more experienced team-mates.

Real Madrid’s leaky defence this season has been no secret, though just of late things seemed to be improving, as shown against Huesca. The back four had become settled in selection and was functioning as a unit and Thibaut Courtois was in good form behind them. The Belgian maintained his form, but others could not maintain their concentration up against inferior opposition. Such complacency was obvious in allowing both Kashima Antlers and Al Ain easy goals which could have been avoided with a mere ounce of effort.

In this case, Benzema was the responsible man. Credit must go to Tsukasa Shiotani for a fine header from 12 yards out which left Courtois with no chance, but the Frenchman’s laziness is captured perfectly. As Shiotani begins to make his run, Benzema is caught flat-footed and yards away from the man he is marking. As the ball is then whipped in, the striker has allowed the Al Ain attacker to get right into the heart of the danger area completely unopposed. Enough has already been made of the team’s poor defending at set-pieces this season and this is yet another dash on the tally. 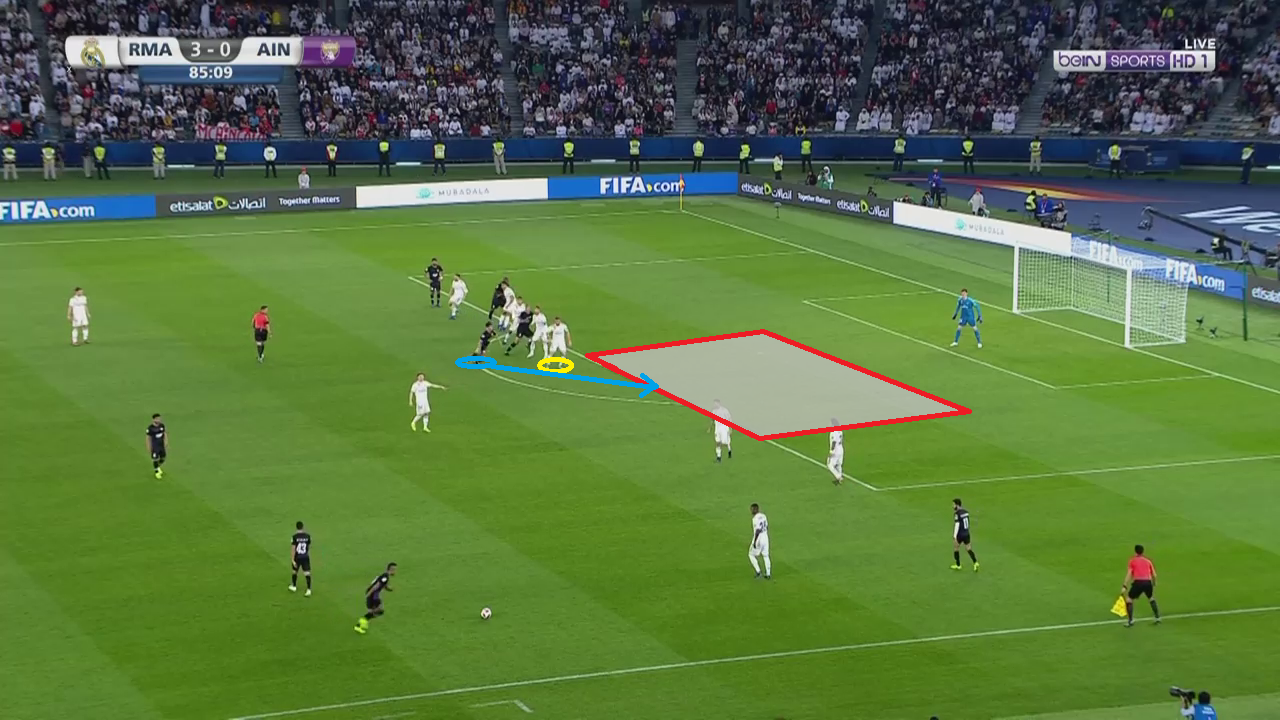 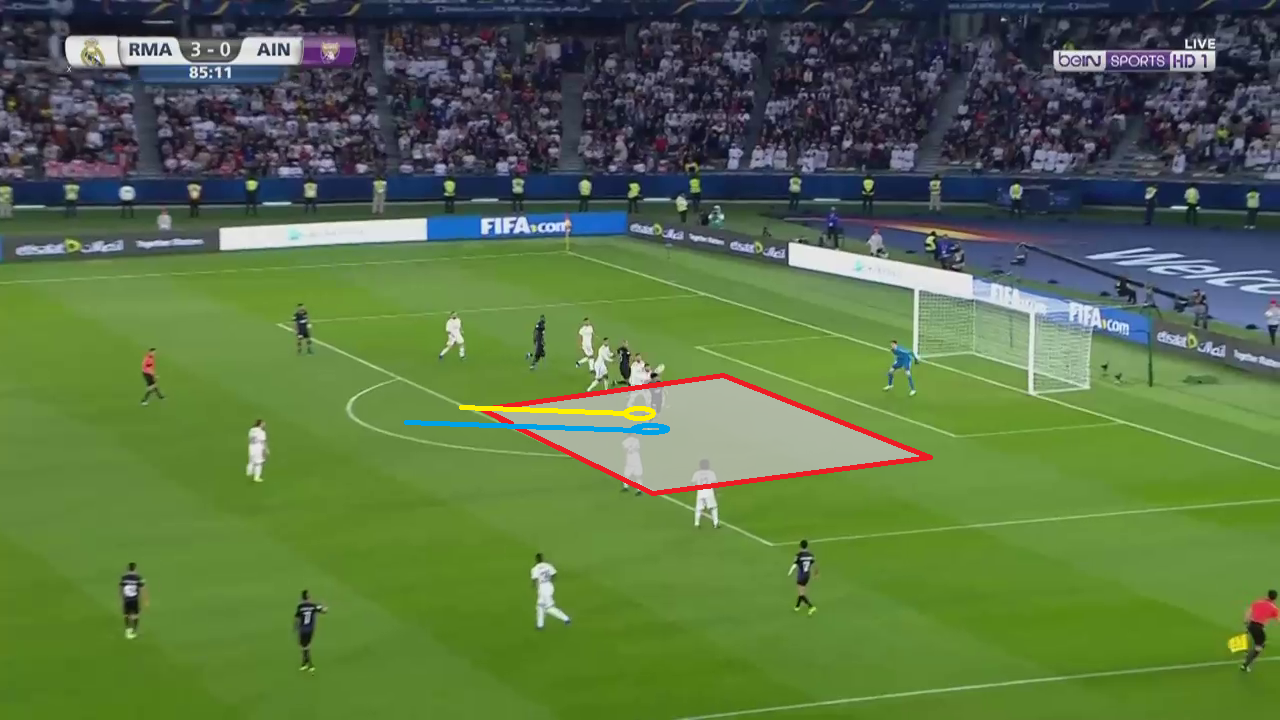 In the end, these goals could not matter less. But for Solari the perfectionist, there could be consequences. It is often up against such so-called weaker or inferior sides that Real Madrid have run into their biggest defensive difficulties, conceding goals against the likes of Eibar, Alaves and CSKA Moscow. This symptom of complacency on display in Abu Dhabi may well be the reason why.

This Club World Cup final was merely a glorified friendly fixture for Real Madrid, but it gave Solari the ideal opportunity to experiment. In doing so, he could trial giving players more freedom, mixing things up. Isco’s absence was again notable, particularly as the first final since he joined the club that he has not played a single minute of. In his absence, Bale appears to be regaining his best form and benefiting from the treatment of the new coach. If this success is to be maintained long-term, he must find a way to make that a regular occurrence.

How will the Champions League group stages play out for La...