Ernesto Valverde has gotten an early Christmas gift under his tree in Barcelona and it arrived in the shape and form of Jeison Murillo, the centre-back from Valencia. This comes as no surprise because, after yet another injury to Thomas Vermaelen, the Catalans were forced to step into the market a bit earlier than they would’ve wished.

Granted, there’s been talk about buying an experienced defender for a while now, and all eyes were set on the biggest prize in Matthijs de Ligt, but Barca will have to wait until at least until summer to get him.

Murillo, on the other hand, comes on a loan deal until the end of the season, solely to patch up the wounded Catalan giant who plan to challenge on all fronts. This tactical analysis will use statistics to determine whether their choice was a good one or not.

Jeison Murillo is a 26-year old centre-back that has plenty of experience in La Liga and the Champions Leauge, which was, in the end, the part that sealed the deal. His initial price of around two million euros for the loan deal, with the additional option to purchase for another 25 million, was the other part.

This Colombian international started his European career with Udinese but played his first football abroad on a loan spell at Granada’s academy. Cadiz and Las Palmas were the next steps, and eventually, in the season of 2013/14, he earned himself a place in the starting 11 of Granada, which closed the full circle.

Still, Murillo played his best football at Inter where he spent two seasons and played a grand total of 69 games. Another loan saw his transfer to Valencia and the Bats decided to buy the centre-back in 2017/18 and he’s been representing them ever since.

He also has of international pedigree with the Colombian team. Murillo played in the Copa America in 2015 and 2016, finishing third in the pecking order in the latter tournament.

On a side note, Jeison faced Barcelona three times during his stay with Granada, winning once against Tata Martino’s Barca in 2014 with a surprise 1-0 victory at the Nuevo Los Cármenes.

Murillo is a right-footed centre-back who spends most of his time (83 %) playing on the left side of the back line. He can also slot into the right side (9 %) and be deployed in other positions in the defence 8 % of the time. 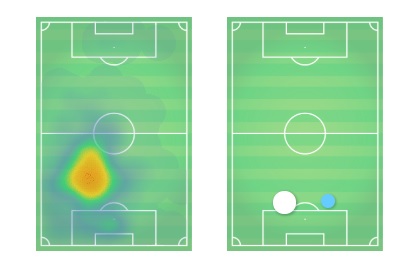 “I’m fast, intelligent, have a good touch and I’m brave.” Were the words Jeison Murillo first spoke when he was presented to the public, and judging from those, he is actually a good fit at Barcelona. But let’s start from the beginning.

As with all other positions, Barcelona always look for a certain profile of a player more so than anything else. A Barcelona centre-back has to be good on the ball, able to play quick and accurate passes, maintain a high defensive line and be a big part of the build-up for the attack.

Jeison Murillo is a slightly different breed but also does possess at least some of the aforementioned characteristics. In general, he can be described as an aggressive and highly physical player who thrives on challenges and tackles.

Notice in the image above how Murillo breaks the formation in order to advance higher up the pitch and immediately press the attackers. This is something he often does, challenges the opponents before they actually enter his third.

On average, he engages in 7.69 duels per game and wins around a quarter of all of them with a percentage of 25.5%. Still, when compared to his new teammates, the difference is not that big. Gerard Pique averages 25.8% and Lenglet is the best of the three with 31.8%.

But it has to be noted, however, that Murillo does engage in almost double the duels of Pique (4.8) and only 0.84 less than Clemont (8.53) which gives proper context and value to his numbers.

Another one of his aspects that has to be noted is his sliding tackles. Murillo loves engaging in them and he is fairly successful in doing that.

Once again, Murillo goes in aggressively and breaks the line to engage in a duel. This time, with a well-timed sliding tackle, not only does he intercept the ball but he also retains possession and Valencia can switch from defence to attack in a single move.

One other thing that Murillo mentioned is his intelligence on the pitch. This comes with the experience he has had in all competitions. In the example above, Murillo anticipates the pass from his opposition and once again times his sliding tackle extremely well.

By reading the game well and using his skill set to the fullest, he can break off the attacking side’s progress seemingly with ease. On average, he recovers 11.28 ball per game and 12.1% of all of those happen in opposition’s half of the pitch.

But how well can he adjust to Barcelona’s style of play?

Judging from the stats, Jeison Murillo seems like an adequate band-aid for Barcelona’s troubled backline. Still, as we’ve already mentioned, it is not enough to be a good defender to be able to adjust to the Catalan’s system.

Luckily for this Colombian centre-back, he has the adequate characteristics to be more than just fairly successful at his new job.

Barcelona traditionally set up a high defensive line and many have questioned Murillo’s ability to function in such a demanding formation. Yes, he is not really used to that kind of a job in defence but it is not entirely unfamiliar to him.

Note that Murillo is the last man in the back for Valencia in the example above. This is by no means the club’s standard but when they are the dominating side and have the reigns over the possession, the squad has been known to operate in a similar system to the one Jeison will inevitably experience at Barcelona.

Sure, it will probably be something almost completely new to him but it is also something that he can adapt to fairly easily. His transition from a more traditional, aggressive centre-back to a ball-playing one should not be a painful one, at least not on paper, that is.

His ability to build play all the way from the back is already more or less established. Murillo averages an impressive 90.5% passing accuracy (higher than Lenglet, lower than Pique) and receives 27.42 passes per 90.

This will definitely be something new to him since both Barcelona centre-backs receive almost double this amount in a game. That is clearly a gaping difference in the systems used by the two teams but it is safe to say that Murillo is quite safe on the ball, as he proclaimed himself.

Another aspect that is fairly similar to the Blaugrana system is the centre-backs often starting the attack, either by linking up well with the midfield/attack or by switching up the play.

In the image above, Murillo changes sides quickly and more importantly, accurately. He is often seen sending long balls behind the opposition’s defence as that is a standard part of his repertoire.

4.33 long passes per game with 59.6% accuracy is pretty impressive for a defender, especially considering that he sends 4.58 into the final third to start the attack with a 71.8% success rate. As impressive as it may be, it’s far lower than what both Pique and Lenglet output regularly.

Still, he is not expected to be better than them, just an adequate substitute. And that, he really is.

What matters most for Valverde is that Murillo will perform when he is needed to, and judging by the circumstances and the number of games left to be played, the Colombian will definitely get his chance to shine.

As far as his reliability goes, I think he will do just fine. He can play out from the back, and move up higher when needed, he is good on the ball, and safe in defence. We all know that Valverde prefers the safer options to the high-risk, high-reward approach so Murillo will have to tone his aggressiveness down a bit.

When he is needed to advance the attack and turn into an offensive outlet, just like Pique does in times of need (and leisure), Murillo is also capable of such things.

0.81 dribbles per game is low but also pretty good for a defender, especially considering that when he does opt for one, in 88.9 % of the time, he will be successful in beating his man.

He is not the tallest of defenders at 6’0’’ but he wins 55.6 % of all of his aerial duels, which is a needed figure for Barcelona, especially in defence.

Jeison Murillo is the latest signing and also the sixth one coming from Valencia after David Villa, Jordi Alba, Jeremy Mathieu, Paco Alcácer, and André Gomes. On paper, this was probably the best possible move for Barcelona at the moment.

The club will pay for his wages, and a small fee to take the player to the Camp Nou. It’s difficult to judge in what state does the defender arrive in Catalunya since a personal dispute with the manager had him sidelined for the majority of the current season.

Only three games to his name so far in the 2018/19 campaign were a bit worrying but considering that he was one of Valencia’s best defenders in the previous one, that point can be disregarded.

To conclude, Murillo should not expect to play every game and he most certainly won’t, especially in normal circumstances with all the defenders fit and ready. However, the circumstances are not near normal in the Catalan capital, and Murillo arrived when he was needed the most.

Will he live up to the expectations? My initial guess is – yes, he will. He is a solid, reliable defender who has what it takes to adapt to the Barcelona system. Maybe he won’t become a starter or a big Barca name but he can definitely get the job done.