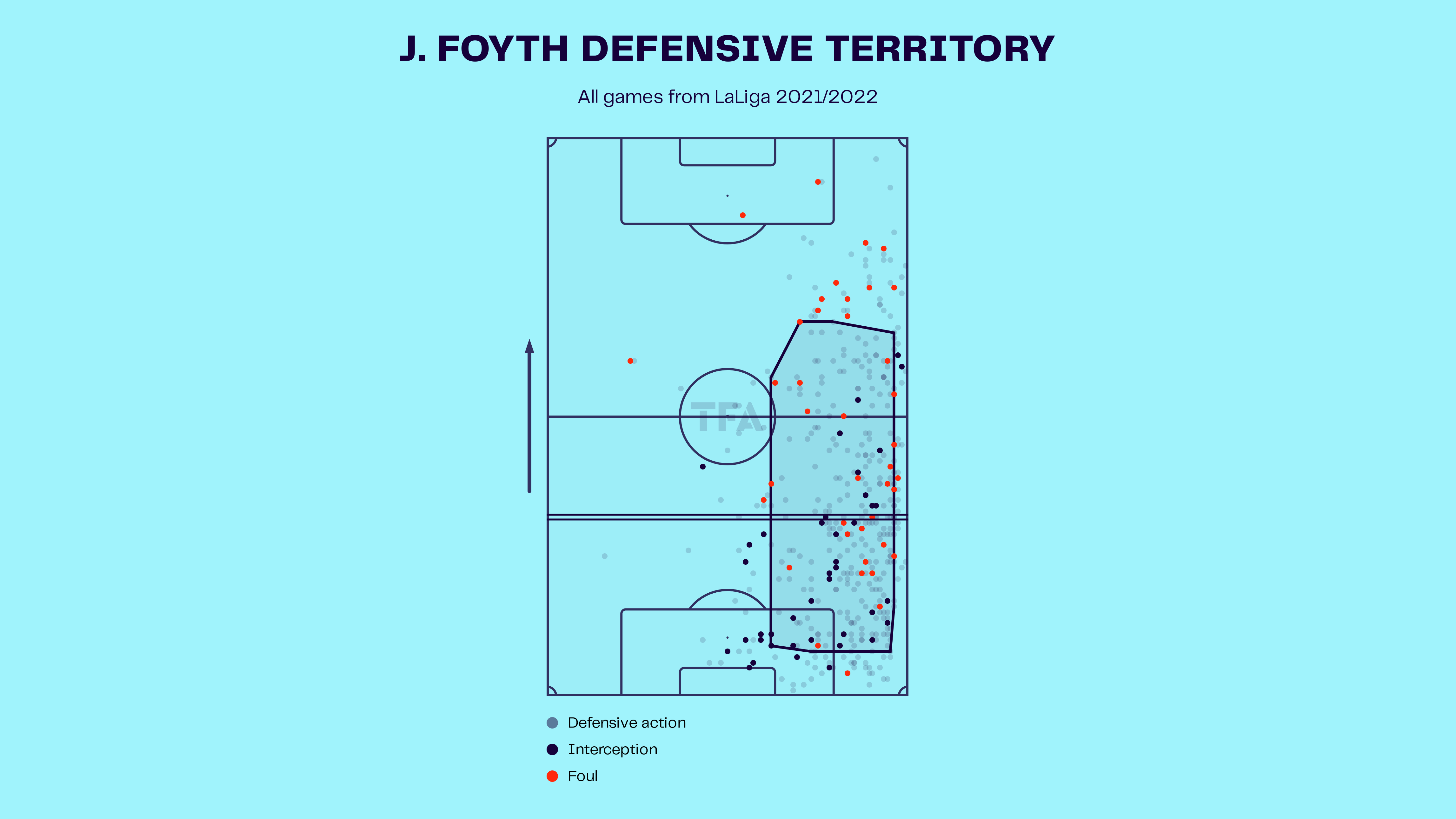 Barcelona are desperate to sign a right-back as none of the options they have tried at the position have worked for a long-term plan. There were rumours about Barcelona interested in Villarreal’s young right-back, Juan Foyth, in the summer. But their financial position forced them to postpone that signing. Juan Foyth is an excellent right-back and would be an ideal fit for Xavi’s Barcelona. With his athleticism, passing range, and defensive skills, a move to Camp Nou just makes sense for both parties. Barcelona would be trying to strengthen their squad in the winter transfer window with a good right-back being one of the priorities.

We take a look at some stats to understand why Juan Foyth is the right option for Barcelona.

Juan Foyth has only played four matches this season as he was out due to an injury for a major portion of the season. He started three matches and came off the bench in the last match before the World Cup after recovering from the injury. 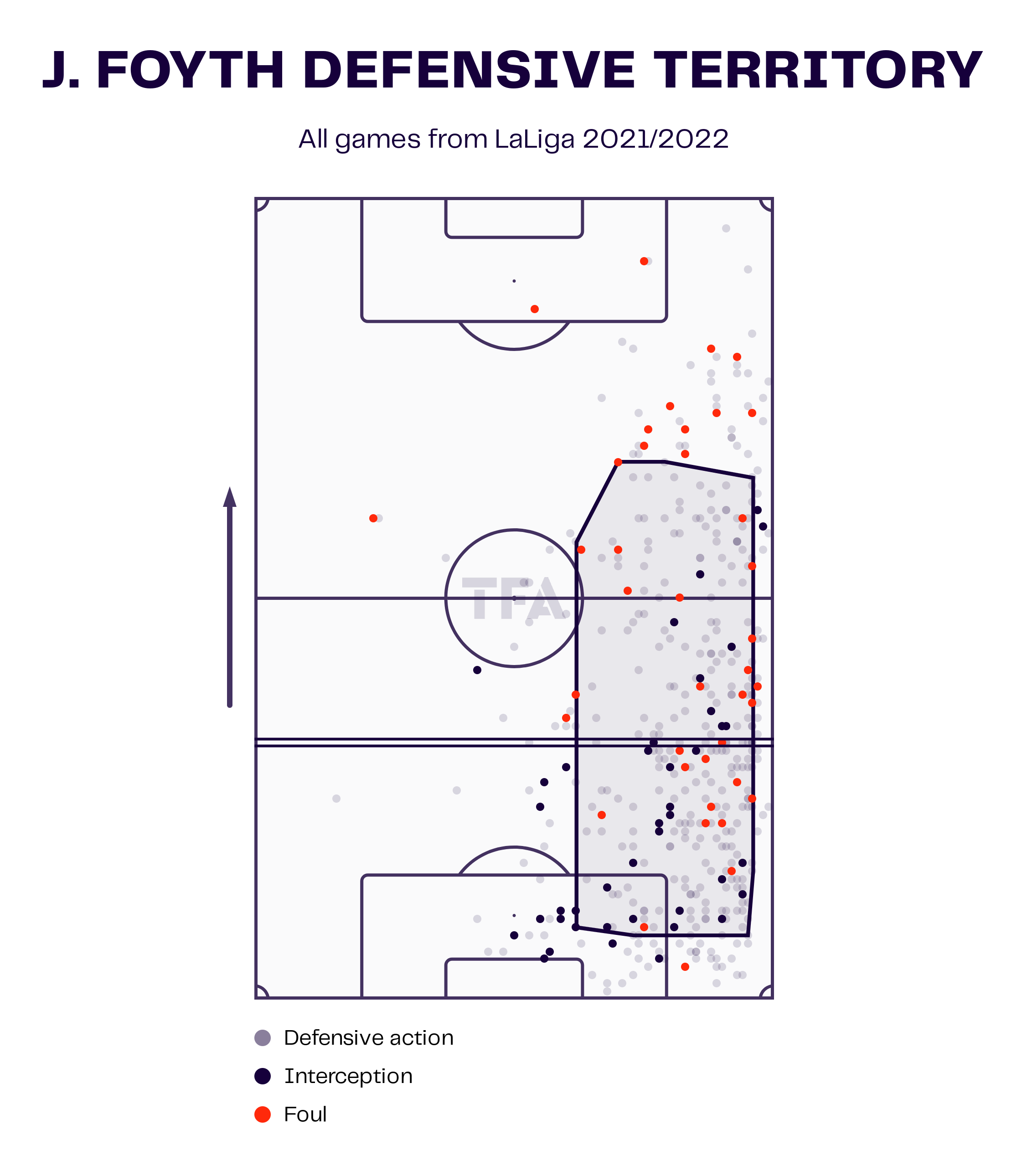 Juan Foyth plays as a right-back and has been solid at the back for Villarreal. He overlaps well and tracks back when required as well. He makes around 4.75 interceptions per game and recovers the ball 9.16 times per 90 minutes. His speed and composure under pressure make him a fantastic right-back option. Foyth also gets involved in 10.34 defensive duels per game with 64.3% accuracy and 2.68 aerial duels as well. His defensive qualities are good and will add assurance at the back for Barca if they sign him.

The right-back for Barcelona should have a good passing record and attacking game along with defensive skills. In that regard, Juan Foyth is an excellent choice for the Blaugranas as he has brilliant passing stats. He had a pass completion rate of 85.7% last season. The above viz shows the pass map of Juan Foyth.

We can observe from the map how he likes to switch the play from one flank to the other. He plays around 2.55 long passes per game with 48.2% success. Another thing that the viz suggests is how much he overlaps as well and play passes in the attacking half. He plays around 4.98 passes into the final third per 90 minutes with 71.5% success. 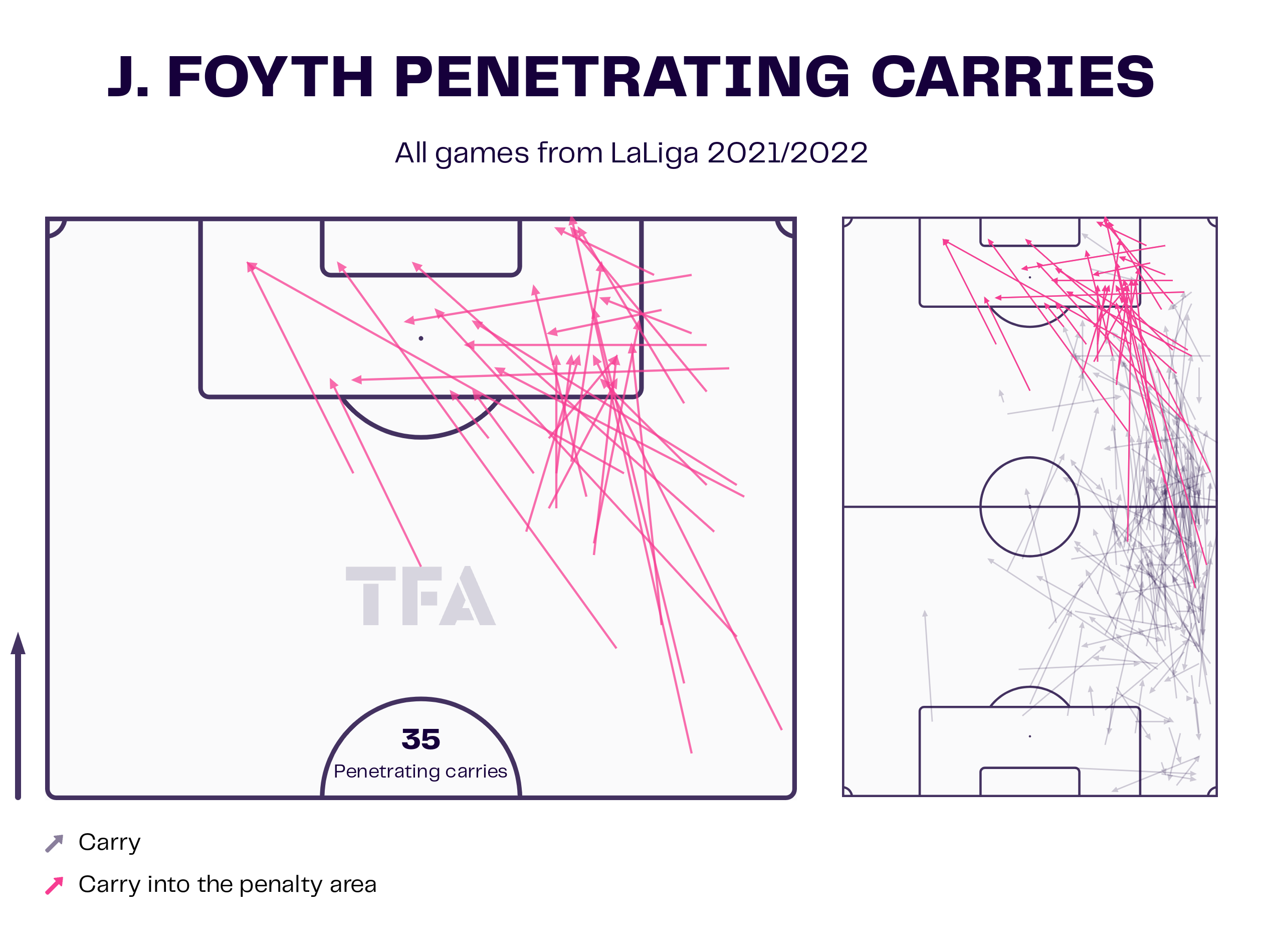 Another strong attribute of Juan Foyth is his ability to dribble. He runs with the ball at his feet and uses his technical ability to go past players. The above viz shows the penetrating carries made by Juan Foyth in La Liga last season. He has made 35 penetrating carries and makes an average of 2.01 dribbles per game with 64.1% success as well. He also makes an average of 2.17 progressive runs per game too. We can observe from the viz that he likes to bring the ball inside to the penalty box and contribute towards the attack and Barca will benefit from this considering it adds another attacking option and lets the winger stay wide on the pitch. 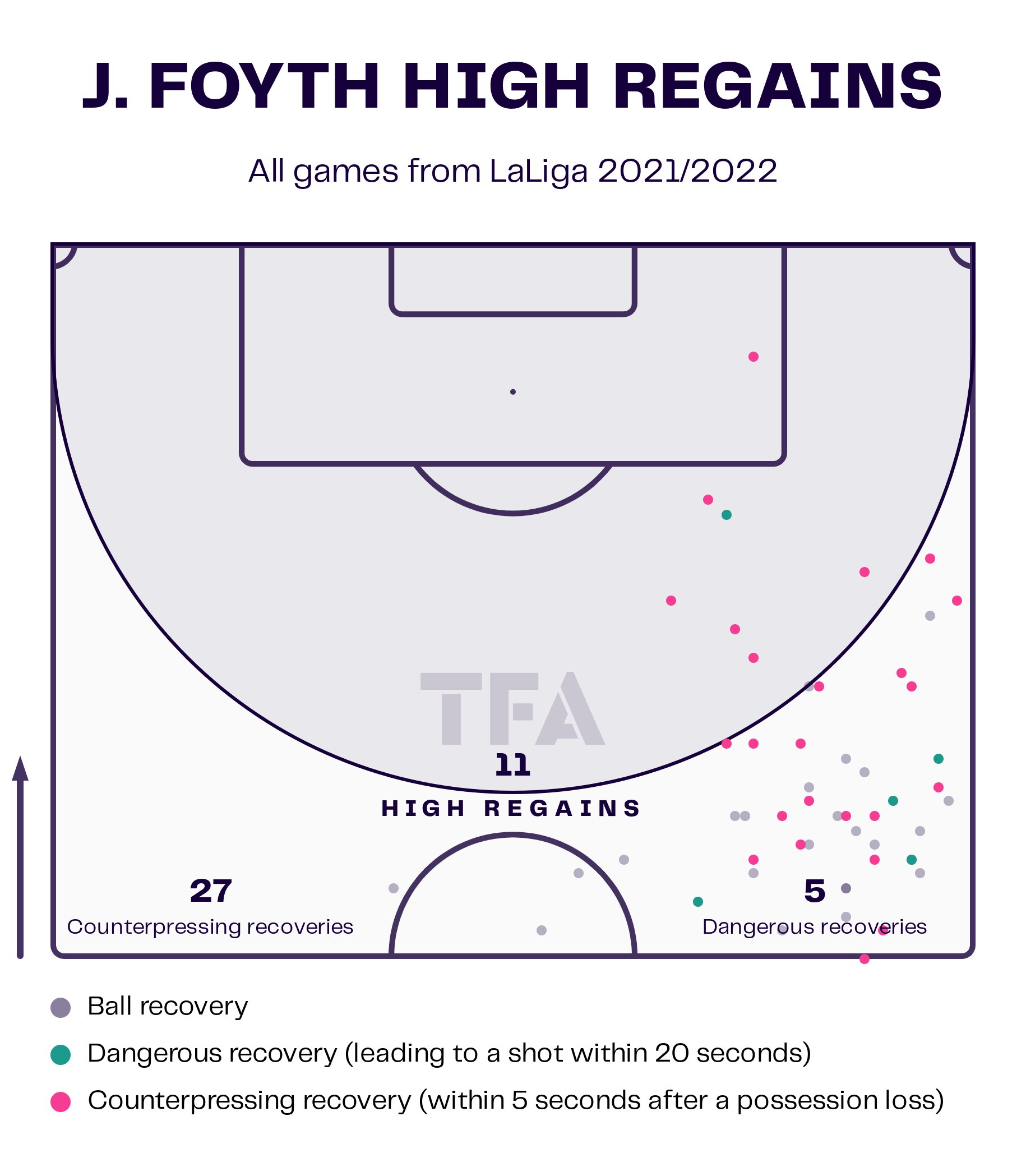 As Foyth usually overlaps, he stays in the attacking half a lot. This helps him to regain possession high up in the field. These high regain include 27 counter-pressing recoveries and five dangerous recoveries. He has recovered possession in dangerous areas and that has helped his team to continue attacking. This will be of incredible help to Barcelona as Xavi gives a lot of importance to counter-pressing. 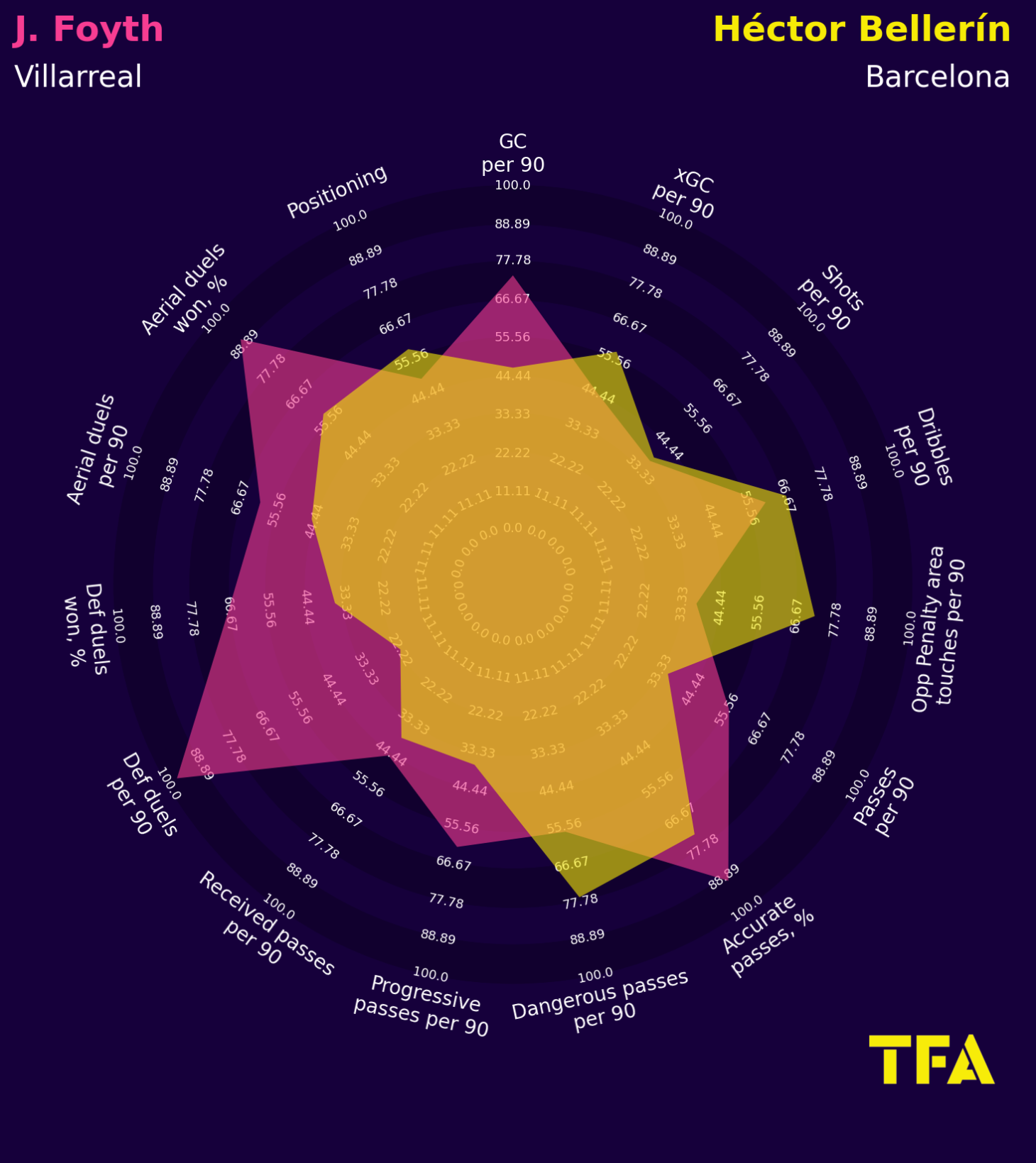 The above viz compares Juan Foyth’s radar to that of Barcelona’s current right-back, Hector Bellerin. We can observe how Juan Foyth is better in almost every aspect and therefore would be an upgrade from their current players at right-back.

Overall, Juan Foyth provides good passing, incredible attacking options, and stability at the back, all of which Barcelona are desperate for at the right-back position. If they sign him, Foyth will provide solutions to many of Barca’s headaches and could be one for the future as well.

Barcelona closer to “banter era” than they realise

Bale. Swap deal. Tottenham. In that order: The perfect move for...