Real Betis visited Mallorca last Saturday and managed to snatch all three points away with an impressive first-half display that saw them seal the deal in another thrilling La Liga fixture. Even though the home team snapped out of limbo by the end of the first half and especially going into the second, it was not enough to get back into the game.

This tactical analysis will give you both teams’ tactics and use analysis in order to see how exactly Real Betis managed to tally their second win in a row and make Mallorca’s relegation battle that much more difficult.

Vicente Moreno opted to deploy his team in a rather familiar 4-4-1 shape, a system they’ve used in 51% of all of their games in 2019/20 but the personnel saw some changes in regards to their previous clash.

Lumor Agbenyenu returned to the lineup and replaced Joan Sastre, while Fran Gámez was deployed on the right side. Reina was, of course, between the sticks and just behind the duo of Raillo and Valjent. In the middle, Salva Sevilla and Iddrisu Babba formed the pivot while Rodríguez and Kubo were slotted out wide. Aleix Febas was in the no. 10 role just behind Ante Budimir up top. 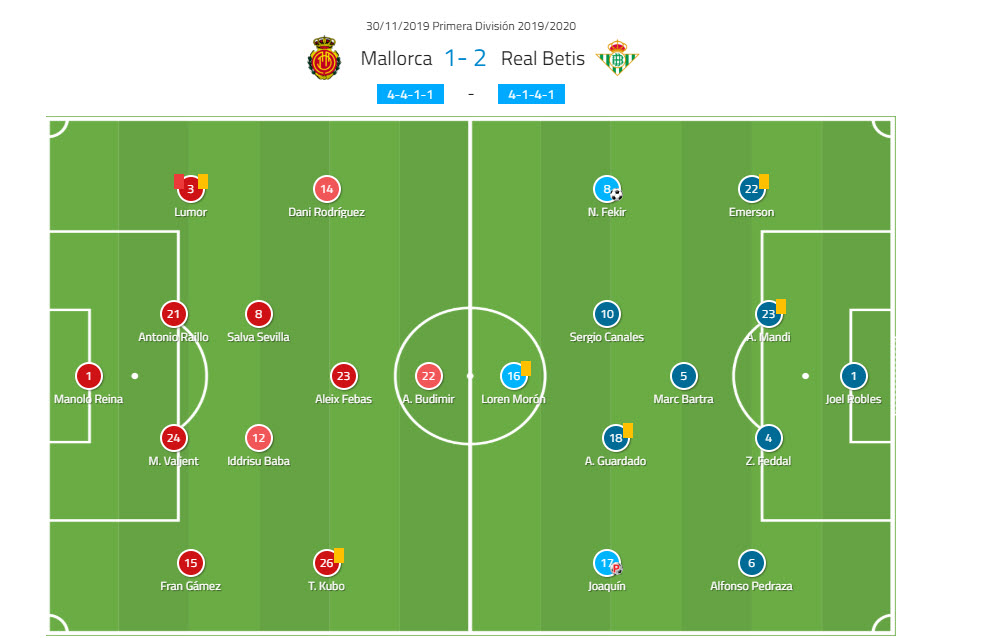 Rubi also decided to go with a somewhat familiar shape but considering we’ve seen Real Betis in all sorts of formations this year, the 4-1-4-1 was still used just 17% of the time in 2019/20.

If you love tactical analysis, then you’ll love the digital magazines from totalfootballanalysis.com – a guaranteed 100+ pages of pure tactical analysis covering topics from the Premier League, Serie A, La Liga, Bundesliga and many, many more. Buy your copy of the November issue for just ₤4.99 here

Under the microscope: Why Ter Stegen deserved to be on the...

At all costs: Barcelona and Juventus have this one thing in...