With the arrival of Zinedine Zidane as the head coach of Real Madrid, it brought with it a turn away from the ‘Galactico’ signings with a view to buying and nurturing younger talents. An ageing squad at the Bernabeu in combination with city rivals Atletico making waves with their youthful talents and title rivals Barcelona spending big bucks on French wonderkids, Real were not left with much choice but to join the teenage crusade.

However, this has not stopped some Castilla talents slipping through the net and leaving in search of first-team minutes. One fine example is that of 23-year-old Mario Hermoso. The Spaniard, since leaving and aiding in an Espanyol revolution, has been linked with Bayern Munich, Arsenal and rather ironically former club Real Madrid.

Joining Real Madrid’s youth setup in 2005 aged just 10 years old, Mario Hermoso was nurtured and developed through the age groups, impressing through each level. Making his way into the C-side, his development accelerated and a year later a loan move to Real Valladolid allowed the Spaniard first-team experience in a senior team. He played 31 league fixtures for the then Segunda Division side before returning to play another year in the division but for Real’s Castilla side.

It was after this final year with Madrid that the decision was taken Hermoso’s time at Los Blancos was not going to continue. Signing a 3-year deal with Espanyol in Barcelona would be a challenge for youngster but one which he would relish. After just the first two fixtures of the 2017/18 season, Hermoso made his debut. A trial by fire against Barcelona in the Catalan derby was the test and Espanyol fell to a 5-goal deficit. These games can be described as make-or-break fixtures especially on your debut but the Catalan underdogs kept faith in their new prodigy and Hermoso went on to play 22 times in his debut season in La Liga.

A quiet, arguably underwhelming beginning to life in the Primera Division, so what makes this Madrid-born castaway turned Catalan defensive fulcrum so desirable now? A ‘stonker’ of a start to 2018/19 so far, that’s what.

This season, his combination of confident, well-timed challenges with a broad and accurate range of passing abilities has made Hermoso a noticeable threat offensively and defensively from a deep position on the field. In the last couple of years, the idea of ‘ball-playing’ defenders has been such an attractive prospect for many sides around Europe, Spain in particular. Typically, the confidence to connect the centre-halves to the pivot midfielders accurately has been a trademark passing link to begin attacks. Hermoso though, is different.

Don’t get me wrong, his short passing is still a very strong attribute in his arsenal leading to more than 87% pass accuracy, however, it is his long passing that has caught not only the eye of many a La Liga fan but of the Spanish national team. Below, you can see the typical space that Hermoso occupies, he will see the run of a winger on the opposing flank and due to his 53% long passing accuracy, he will regularly pick out the perfect ‘ping’ of a cross-field pass to accelerate Espanyol’s attacking wing play. 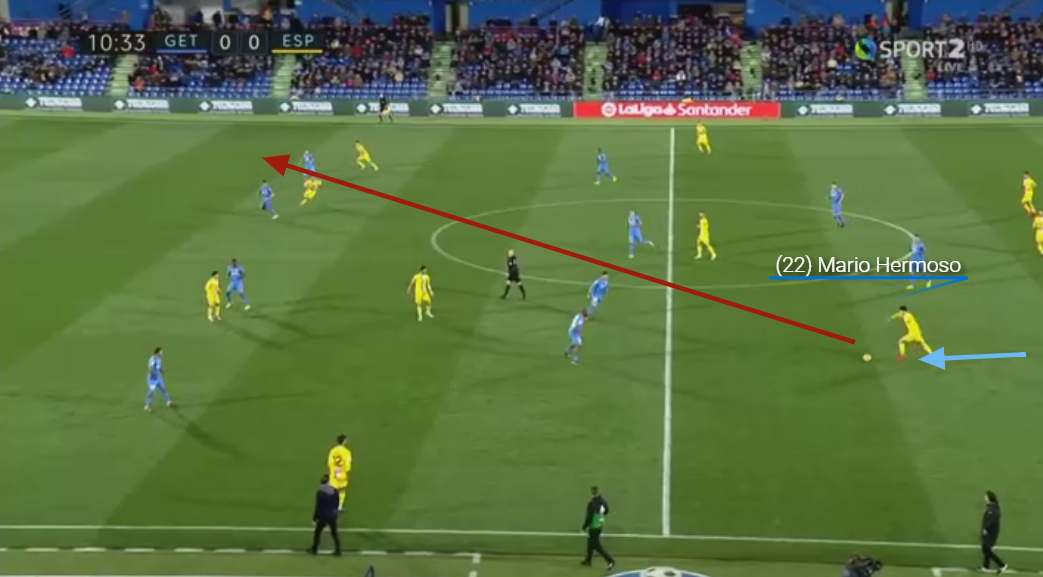 It is this synergy between his young confidence and passing accuracy which has earned him his first call-up to the Spanish national team. The new dynamic of a more versatile passing defensive force to contrast to the presence of the likes of Sergio Ramos and newly retired Gerard Pique has been in desperate need in the years since Spain’s last international triumph.

In addition to this, there has been an explosion in talented youth players who are best deployed in wide attacking positions such as Marco Asensio and Suso with Mikel Oyarzabal and Carlos Soler also showing huge potential. To bring through a central defender who can accurately orchestrate attacks with precise cross-field passes would be invaluable. 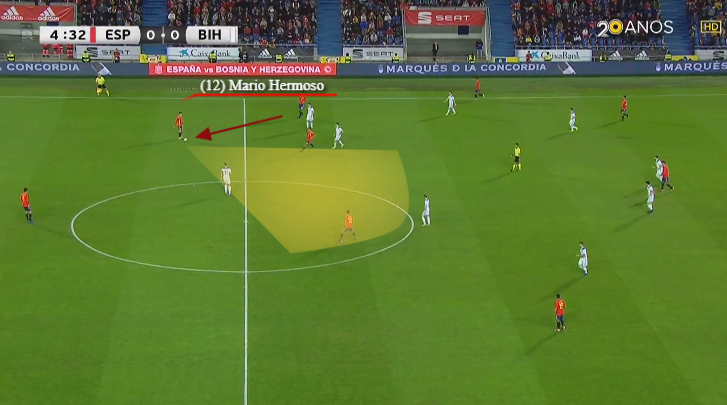 And Hermoso did not disappoint on his international debut. For an example, receiving the ball from Jose Gaya here, Hermoso immediately and instinctively looks up to see the run of Suso on the right wing. The image above shows the placement of Bosnian attacking players looking to suffocate the space. 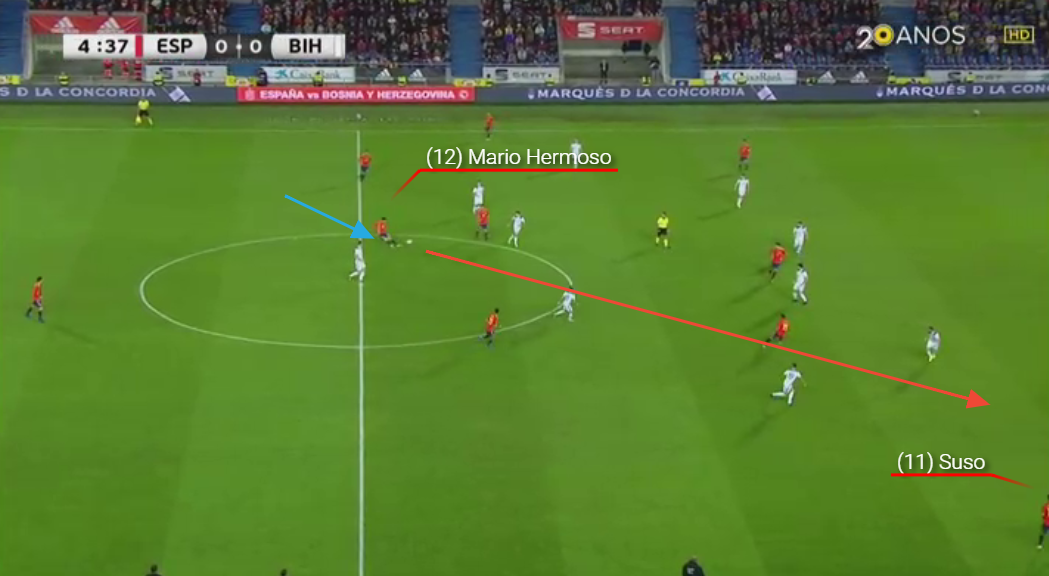 But Hermoso is a special player, displayed by his natural confidence to first attack the Bosnian forwards forcing them to drop back before allowing him the space to conduct his trademark attacking pass to Suso. 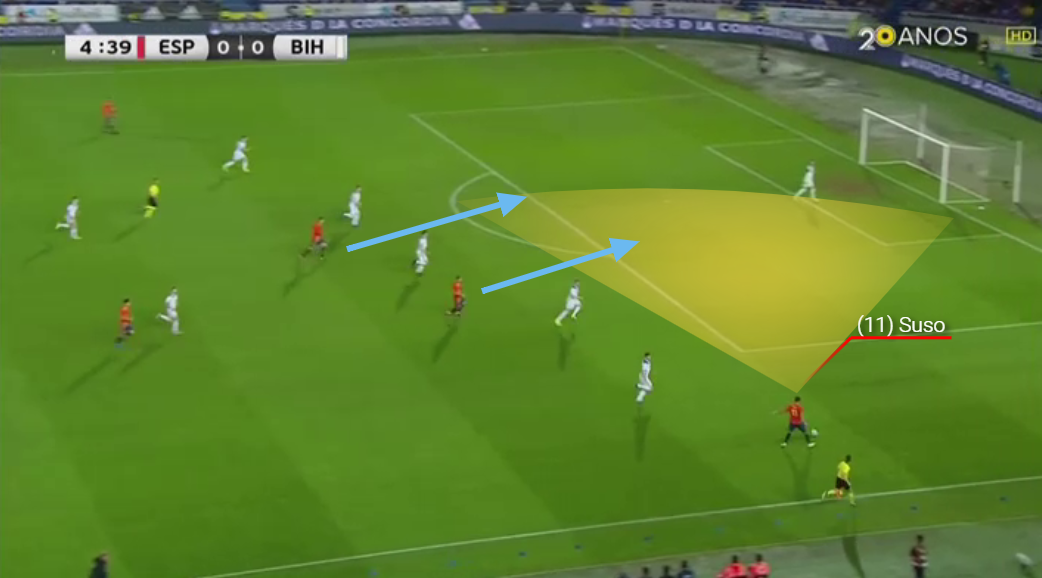 Hermoso’s accurate ball is taken by Suso and as shown in the above image the pass allowed the player the take the ball in stride as not to lessen the velocity of the attack.

It takes more than long-passes though to become an astute and successful defender. Without sounding too patronising it is, of course, the art of defending in its purist sense which even in the 2018/19 season still resonates with match-going fans. There is nothing quite like seeing your player make a gritty attempt for the ball and successfully steal back possession.

Hermoso’s outgoing self-confidence in his long-passing matches that of his defending. As with many young talents eager to impress, especially defenders, you will see them step forward from the back line to recover possession, with Hermoso this is certainly the case. The difference is that whilst this may still show a lack of experience, with an average of seven interceptions and 13 duels attempted each match coming out victorious in just under half there is certainly signs of potential success. 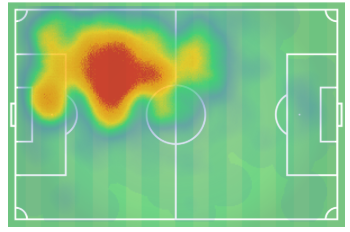 The above heatmap shows where Hermoso steps forward in an attempt to win possession for his team by the darker red extension stretching to just behind the halfway line. A trait which both fellow international team-mates Gerard Pique and Sergio Ramos share.

But it is the nature of his tackling shown in the images below which present the real class and potential in the Spaniard. The patience and timing of his tackles are carried out similarly to that of a seasoned La Liga defender. Not only does he win the ball but his instinctual counter attacking intuitiveness means he does not linger in possession but looks to start an offensive play when the opportunity presents itself. 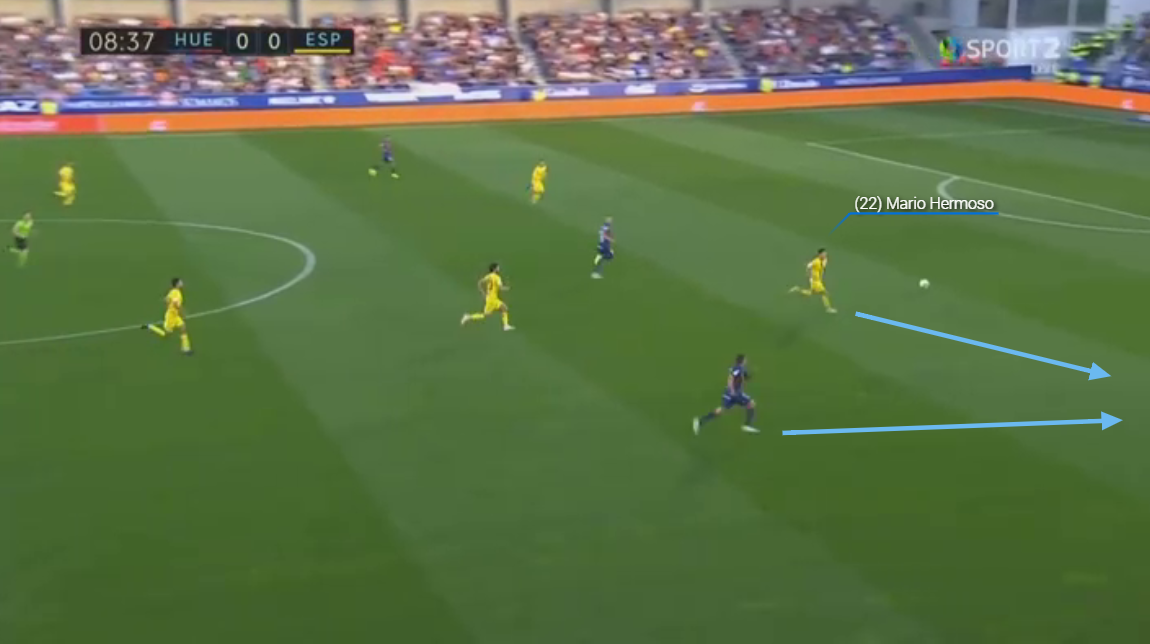 Hermoso’s full-back like pace also allows brilliant cover for Espanyol’s left-back players when caught out of position. As shown above, in the match vs Huesca, Hermoso reacts to the on-rushing winger and makes a challenge to kill the attack and reset the Catalan side’s structure. 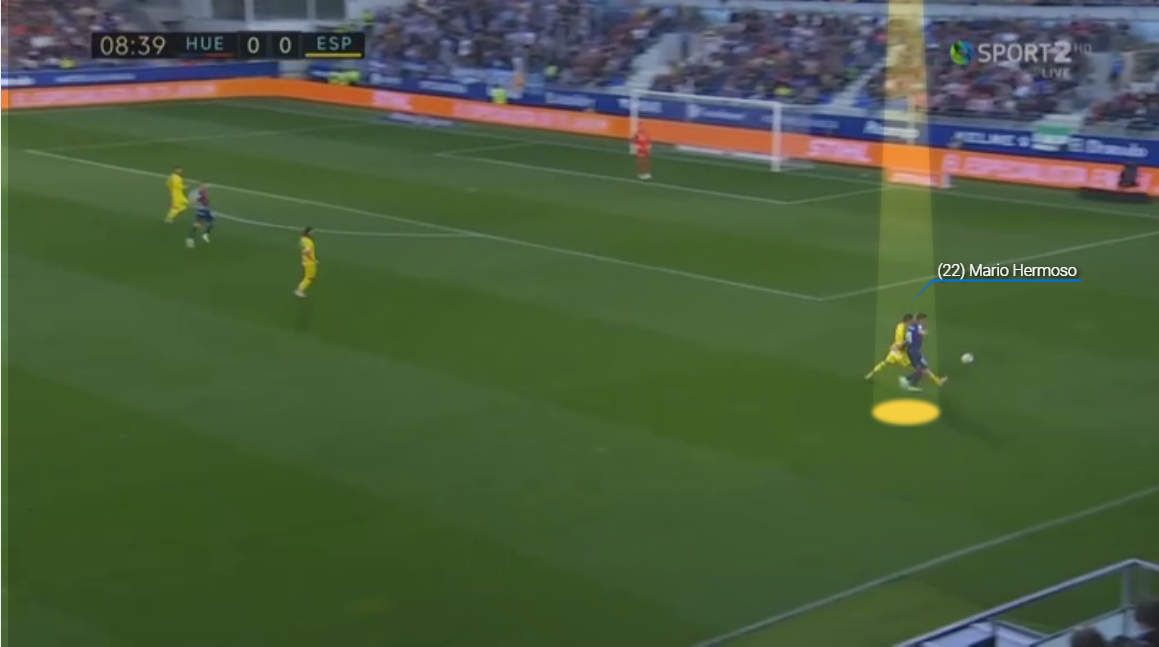 The timing of his tackles have also improved with every game, the approach and jockeying of a player patiently have shown to increase the accuracy and precision of his timed challenges for his club side. 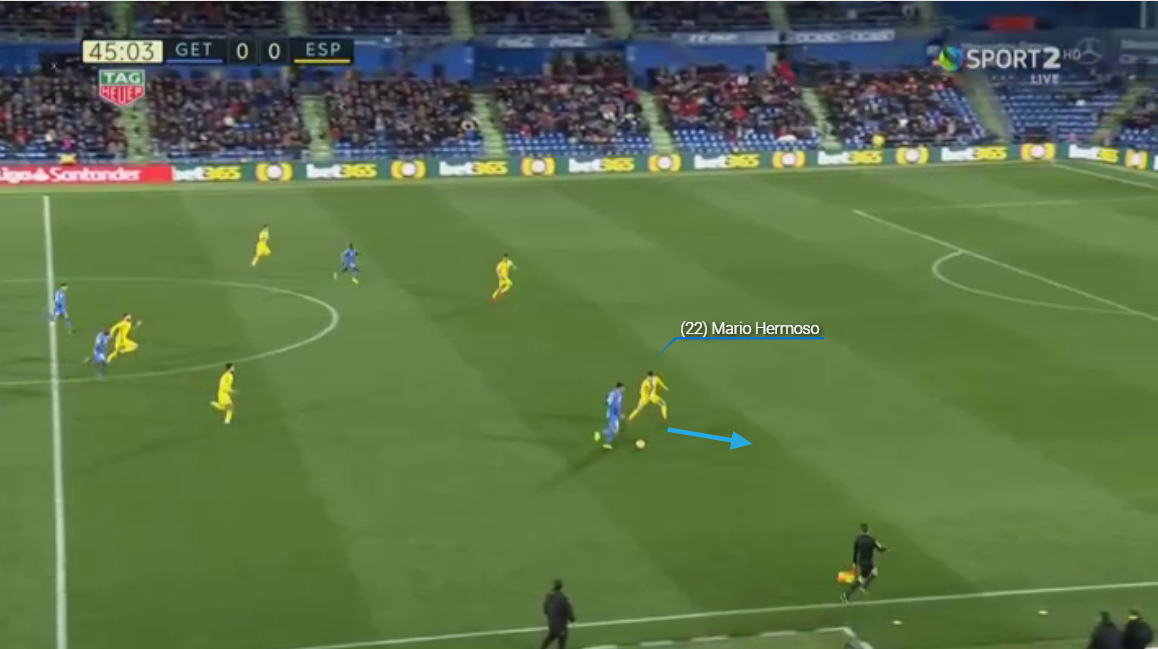 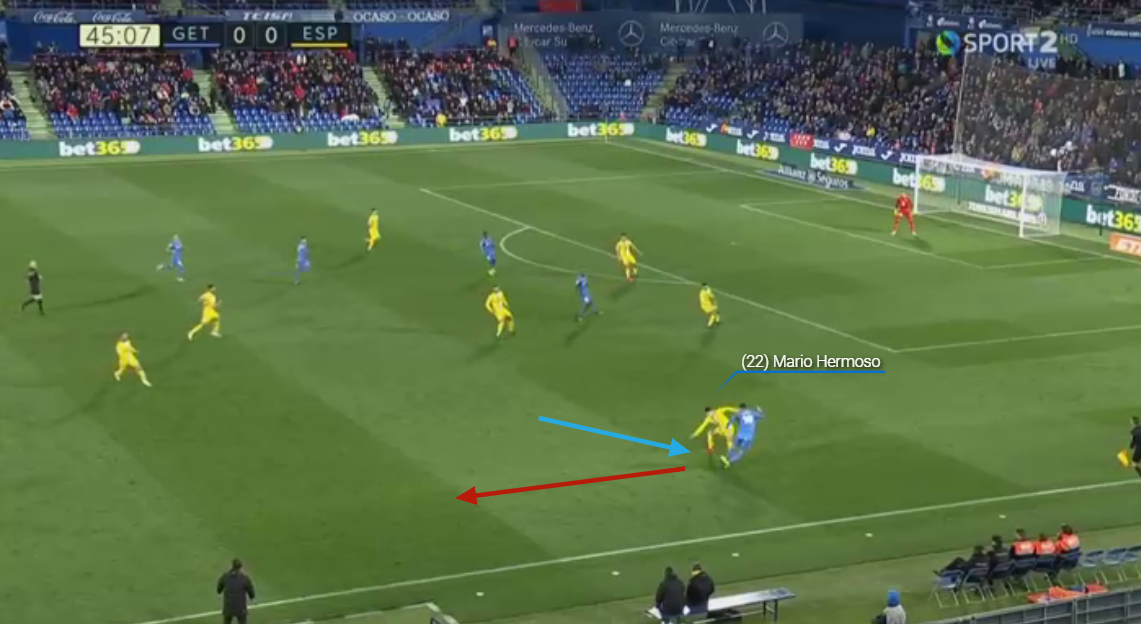 Showing the player wide onto his stronger left foot before making the challenge and then pushing forward. This prevalent display of experience is rare for a player of his age but as mentioned he consistently shows these characteristics in each game.

However, upon making his step up to the national team, there were signs that he will need to show more discipline, on several occasions, the debutant rushed into challenges on Bosnian attackers before getting turned. This will not have gone unnoticed and if he wishes to return to the international setup, these moments of blood rush must be controlled.

Hermoso is a player which should be garnering the attention of the likes of Bayern and Arsenal as well as getting the Real Madrid official wondering why on Earth, they let this young starlet leave. I dislike comparing players to finished articles as players are unique within their own rights and it, of course, provides the added pressure to succeed and even eclipse those previous comparisons.

Hermoso will continue to improve at Espanyol and help them to achieve what could be a return to European competition for the first time since their UEFA Cup final appearance in 2007. Expect though for this young Madridista to graduate Catalunya with a hefty price tag… unless Real Madrid come grovelling back to activate another pitiful buy-out clause of course.