This article originally featured on totalfootballanalysis.com, our dedicated analysis site covering player, coaches and matches from across the globe.

Days after being humiliated by CSKA Moscow, Real Madrid were back at the Estadio Santiago Bernabeu up against much different opposition in Rayo Vallecano. Santiago Solari stuck with many who returned to the team in midweek, starting with the likes of Toni Kroos and Marcelo, and he got his reward with a narrow 1-0 win. It was an inspired finish from Karim Benzema, who collected the ball on the halfway line, played a crossfield pass to Lucas Vazquez and then dashed to the box to add the finish too. Here, our tactical analysis will use statistics to identify what key points Real Madrid can take from the game as they made it three consecutive wins in La Liga.

Close, but not close enough, again for Marco Asensio

Given only his second La Liga start under Solari, Marco Asensio failed to capitilise and the frustration showed. His attacking play was not disappointing, regularly getting himself into threatening positions and pulling the Rayo defence apart with his movements and runs both on and off the ball, but he twice could have found the net before being hauled off in the 70th minute.

The first chance came in the first half when his breakthrough run exploited the space in the opposition defence, bursting through with pace. Asensio rapidly found himself one on one with Stole Dimitrievski, but could only fire the ball weakly at the goalkeeper’s feet. More would have been expected and perhaps it was playing on his mind early in the second half when he had an even better effort. As the ball fell his way in acres of space in the box, he could only fire the ball straight at Dimitrievski yet again. 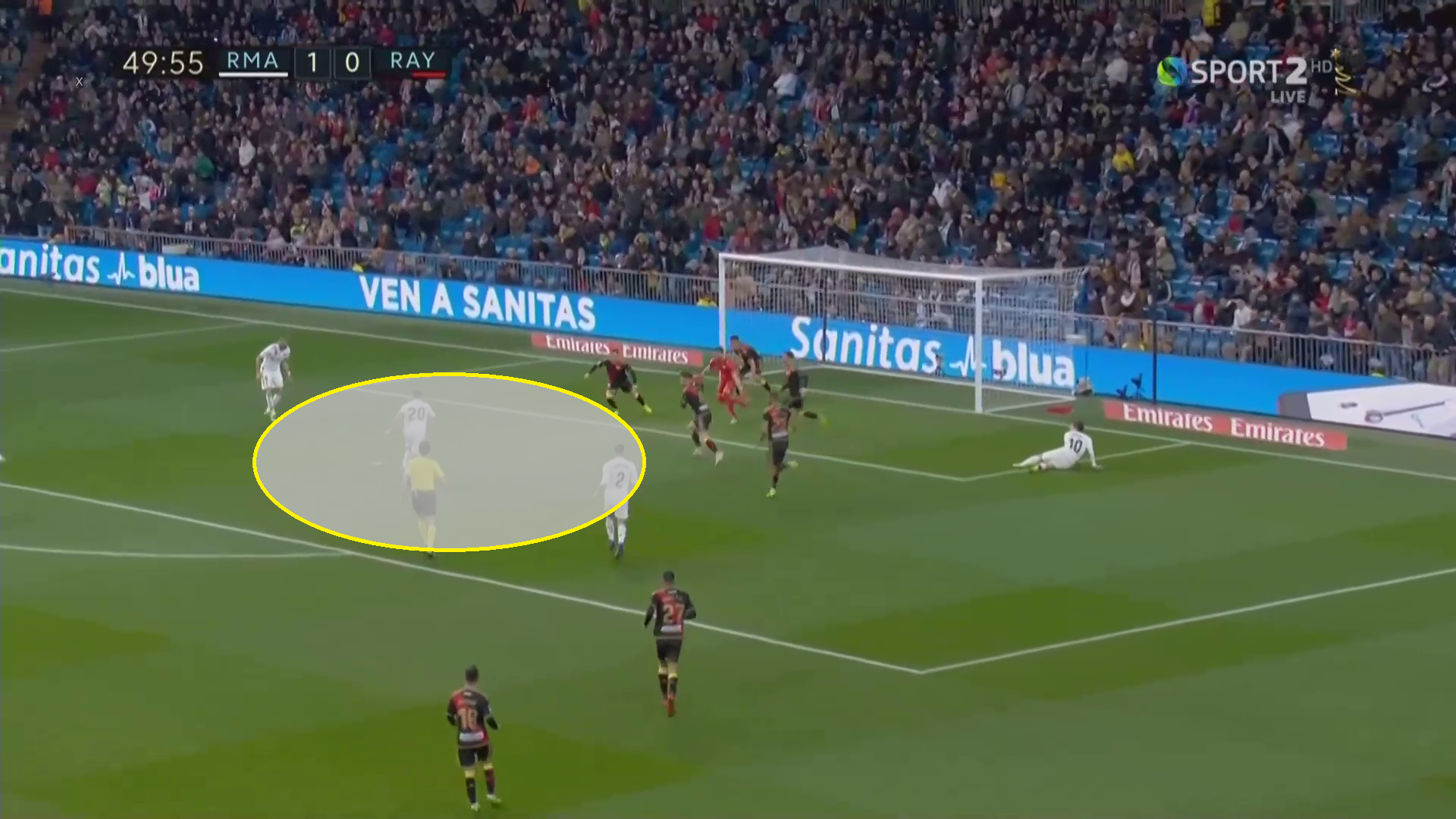 On both occasions, Asensio would have been expected to score. It is now 17 games for club and country, excluding two Copa del Rey outings against third division Melilla, since the youngster has found the back of the net. In the campaign in which he was tipped to replace Cristiano Ronaldo in the line-up, he is instead left fighting for his place in the squad and struggling to prove that he justifies a starting role. After Christmas, much more will be expected from Asensio.

Thibaut Courtois is showing his worth

Real Madrid signed Thibaut Courtois in the summer to win points and he was at it yet again on Saturday. Rayo Vallecano were left without their main threat, Real Madrid loanee Raul de Tomas, and struggled to really generate many opportunities up until injury time. The Belgian goalkeeper then produced a double stop which produced 0.49 of Rayo’s 0.84 xG over the full 90 minutes, reacting rapidly to Alex Alegria’s overhead kick and then Emiliano Velazquez’s follow up.

It is moments like this, when his outfield team-mates are not at their best and allow an opportunity to fall to their rivals way, that they need Courtois. Having been left to sleep for much of the game, Courtois sprang into life and did well to deflect both efforts away, even if the first deflection did not get the ball out of the danger zone. 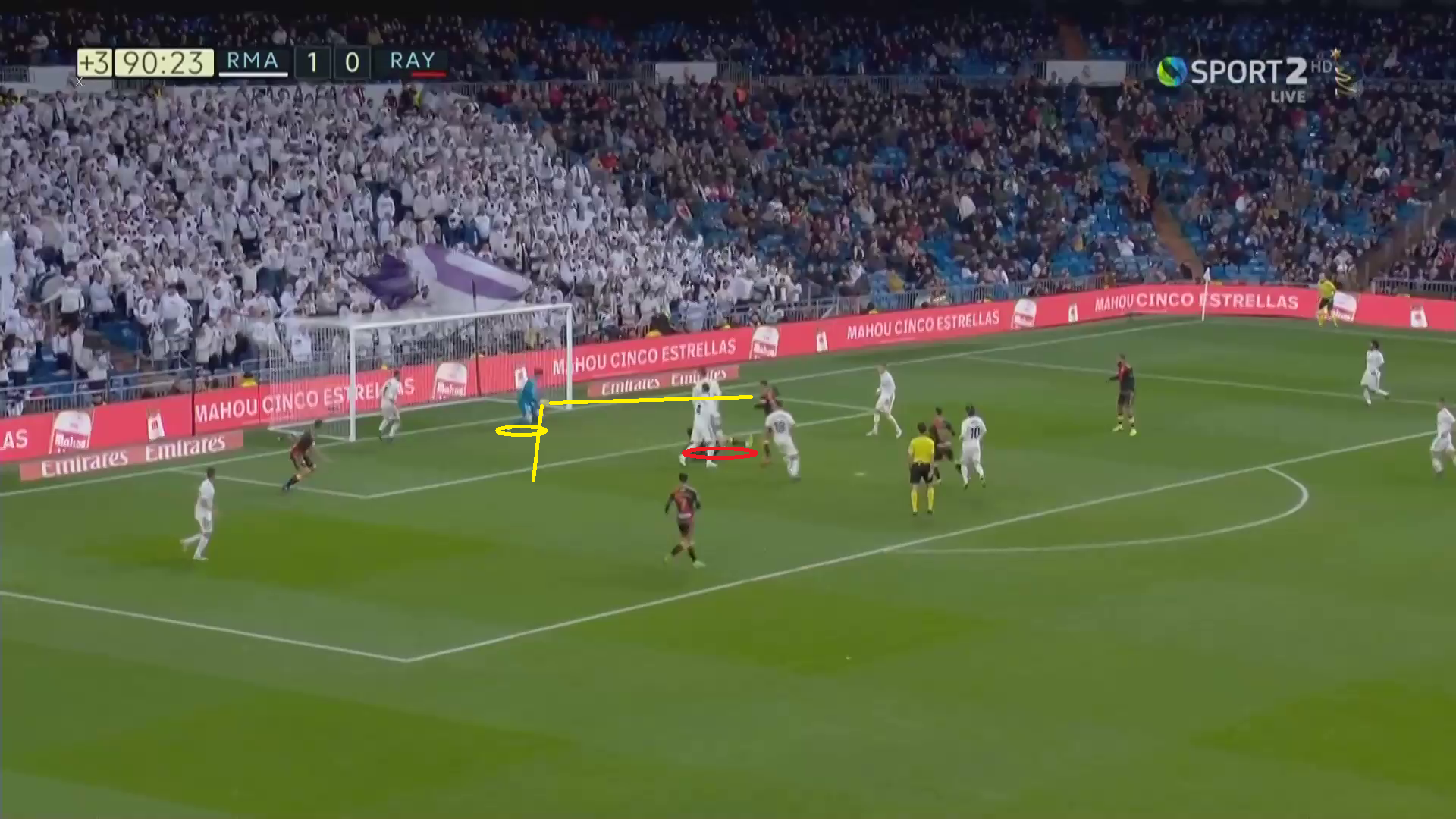 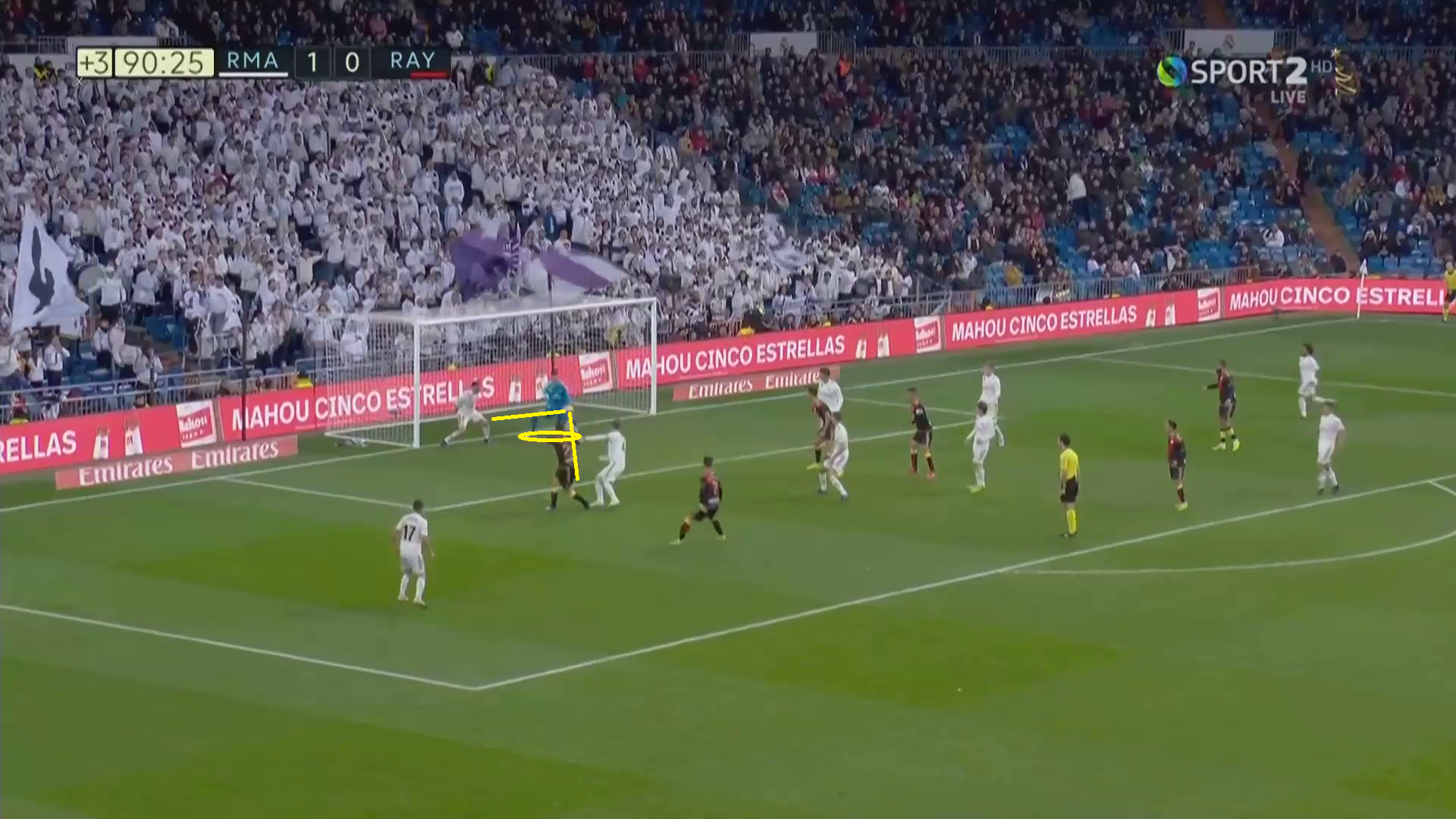 The brutal truth of matters is that Real Madrid should be able to withstand such a barrage from a team lacking quality in attack. They appeared to lose focus as the game wore on and Rayo became more direct, overloading the box at set pieces in a way which really overwhelmed Real Madrid. Fortunately, Courtois was up to the task.

This midfield trio got its first real run-out together on Saturday night and immediately clicked. Marcos Llorente provided depth and volume in midfield, covering to allow Toni Kroos and Luka Modric to push further up the field, almost in a 1-2 midfield shape. Modric also dropped deeper at times, allowing Kroos to support Karim Benzema in a higher offensive line. This resulted in his highest number of ball recoveries than in any other game since facing Celta Vigo in early November.

The German was clearly comfortable in such a role, with his 97% pass completion rate higher than in any other game over the past two months. Having been one of those who has been accused of underperforming this season, getting the best out of him in such a system could be crucial to getting Los Blancos back to their best. This was a start, and whilst it was a trial run against far from invincible opposition, he performed well. 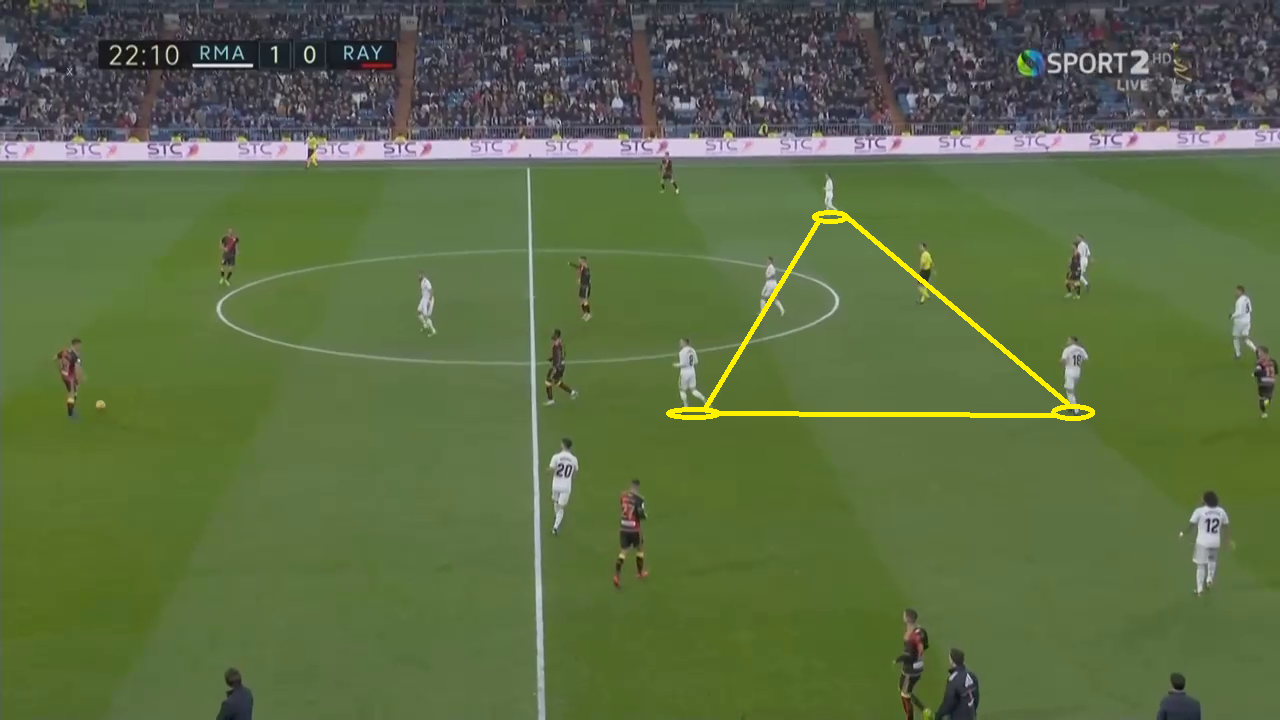 This trio is supported by the adaptability of Lucas Vazquez, who can drop in and form a fourth midfielder. When lining up behind a more offensive front three, for example with Gareth Bale back in the team alongside Marco Asensio, this may be different, forcing Kroos back. Solari is clearly yet to find his best line-up, but he may already be onto something with this midfield selection.

The left flank is the weak spot

For weeks now, the left hand side has been a concern for Real Madrid. For some time, the excuse was ready-made as Marcelo’s absence meant that it was left to youngsters like Sergio Reguilon or players out of position such as Dani Carvajal or Alvaro Odriozola. However, the Brazilian has now returned and against both CSKA Moscow and Rayo Vallecano, it continues to be a major weak point for Los Blancos.

Time and time again, he would recklessly burst forward without covering. In midweek, some pointed the blame at Javi Sanchez for not providing sufficient cover, yet when Sergio Ramos was forced to do so it only left gaps elsewhere. Toni Kroos tried to drop in and cover too but it was simply not enough. Luis Advincula is one of Rayo’s quickest and most threatening players in attack and continually looked to exploit this. 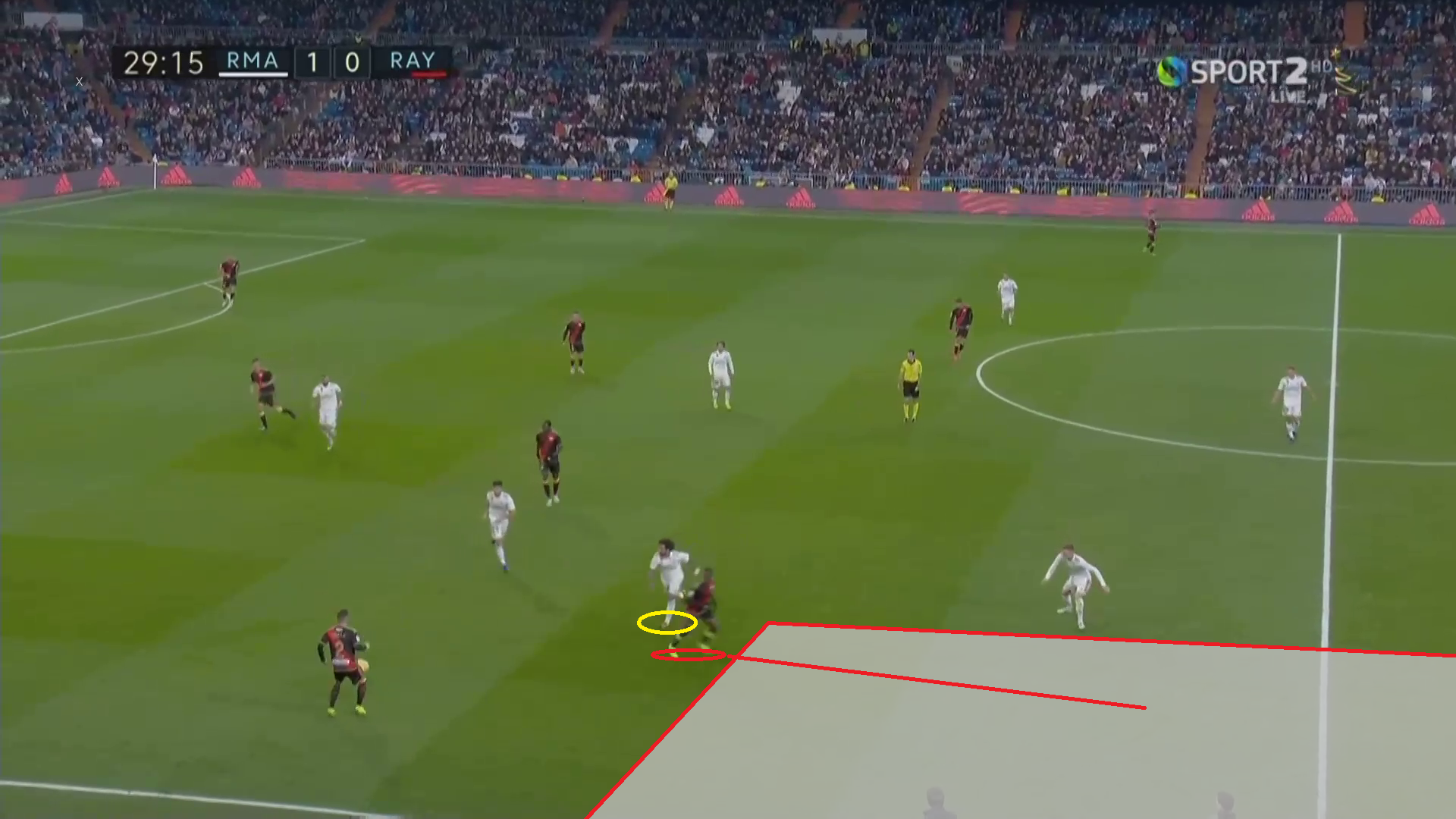 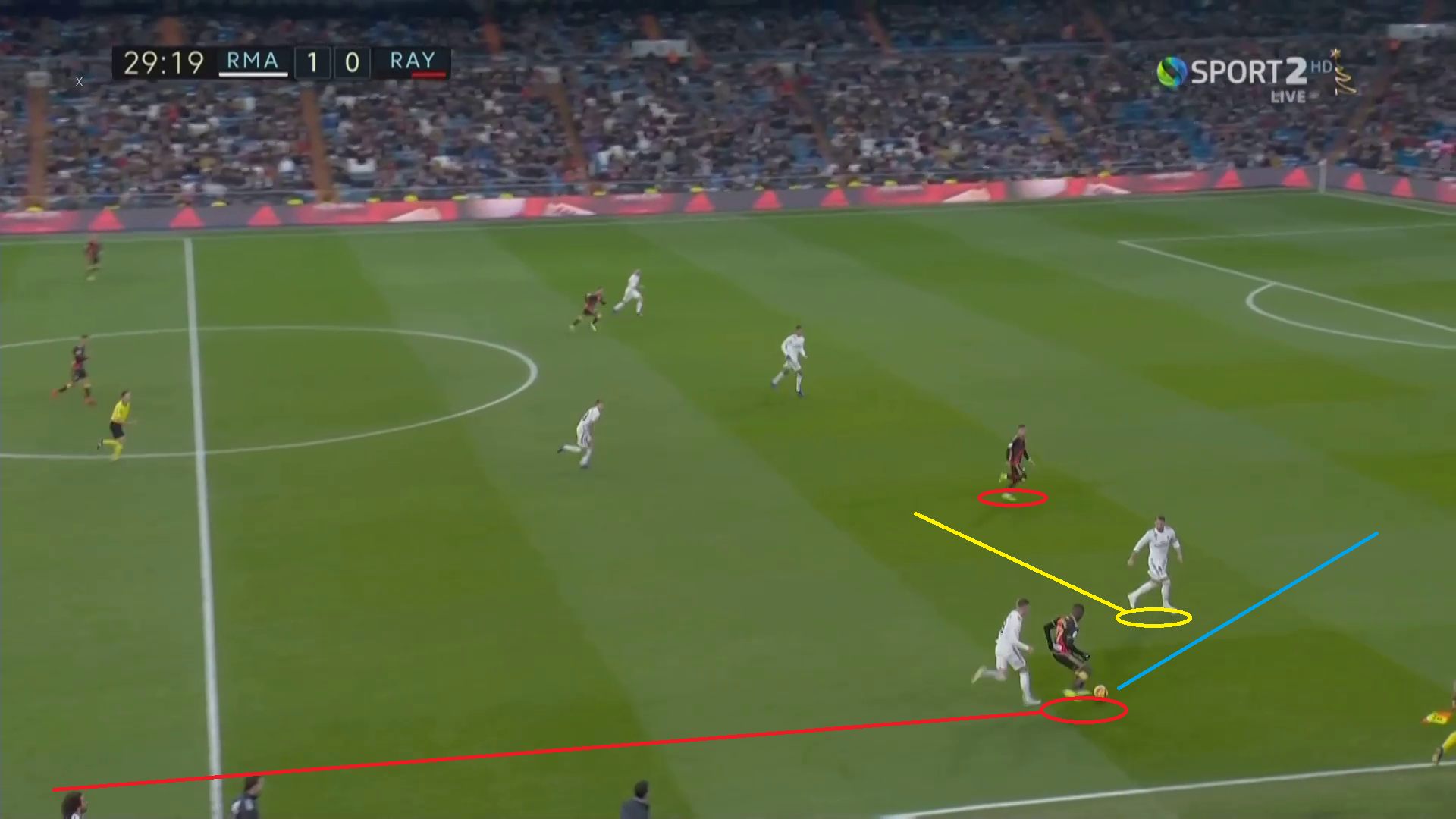 Having spent more time in the opposition half than his own, it may be time for Solari to consider ways to control Marcelo. There is no doubting what he can do in attack, but his continued roaming forward is exposing the lack of pace of Sergio Ramos. Without Casemiro in the middle of the park to drop in and cover as a third central defender, Marcos Llorente also has his work cut-out in leading a transition and acting as a third man in defence.

Real Madrid keep racking up the wins in La Liga, but none of them are particularly convincing. Facing the league’s bottom two in Huesca and Rayo Vallecano, both of whom have been woeful for much of the campaign, in two consecutive weeks, fans would have expected more than two goals. That said, six points are six points and there have been flashes of brilliance which may just go to show that this is a transition for Solari.

Sergio Reguilón: The rise of the young Madrilenian

One for the future: Real must ensure exciting prospect is not...