Having drawn with Villarreal, Real Madrid were out for their first win of 2019 on home turf as they faced Real Sociedad on Sunday evening. The optimism was shortlived though as a second minute penalty was the first indication of the disaster that was in store at the Estadio Santiago Bernabeu. Santiago Solari’s team crashed and burned to a 2-0 defeat, the first victory for La Real at the stadium since 2004.

Willian Jose converted from the penalty spot and Ruben Pardo added a second late on to put the game to bed. Many of the headlines were instead occupied by controversy over a potential penalty not awarded for Geronimo Rulli‘s challenge on Vinicius Junior. Here, our tactical analysis will use statistics to identify what key points Real Madrid can take from the game as they fell to a sixth La Liga defeat of the season.

The left side is the weak spot

For some time now, it has been clear that Marcelo has become Real Madrid’s defensive weak link. Real Sociedad attacked that area more than any other side, with 41% of their attacks and 76% of their xG coming down their right hand side. Given that Vinicius was playing on the left flank, he did little to protect his compatriot in defence who did not limit his runs forward and risky moves in possession either.

That left flank was also the source of the penalty in the opening stages, where Marcelo lost possession needlessly in the middle of his own half, leaving a huge gap in behind which Sergio Ramos had to step in to fill. With Casemiro also dropping in to fill the space left by Ramos, the move ended with both Real Madrid men clumsily falling over each other and tripping Mikel Merino in the process. 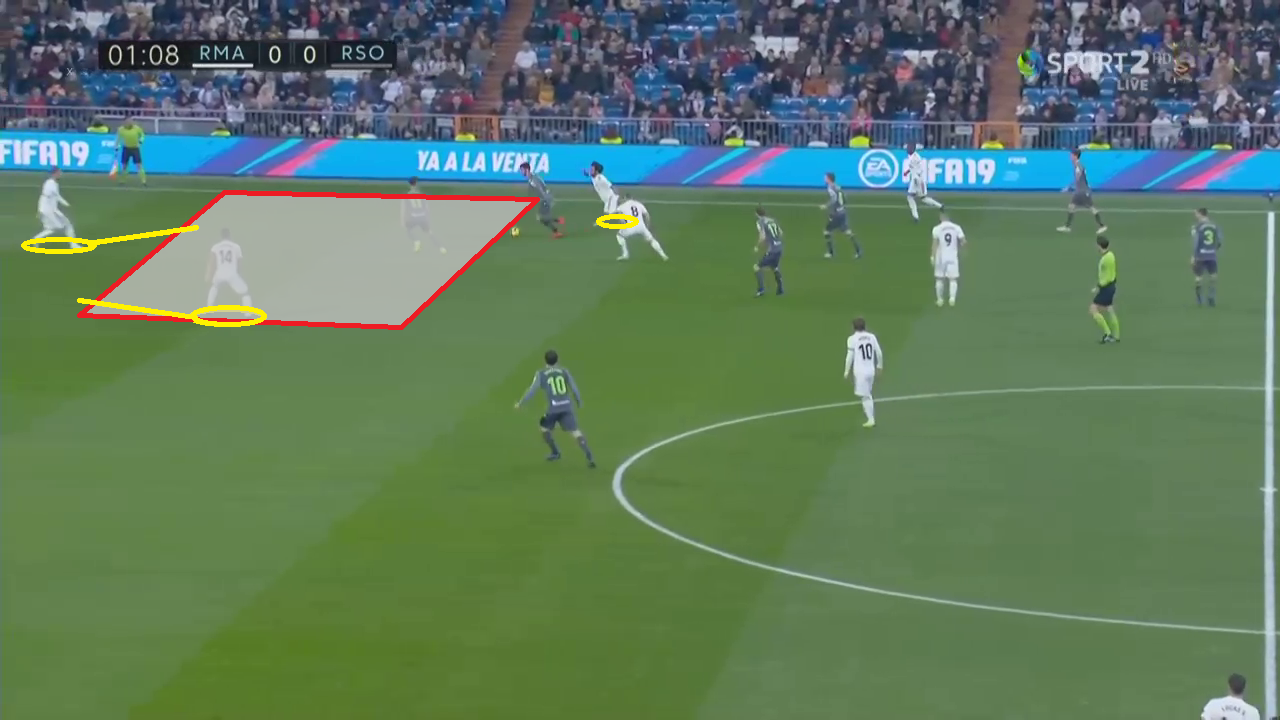 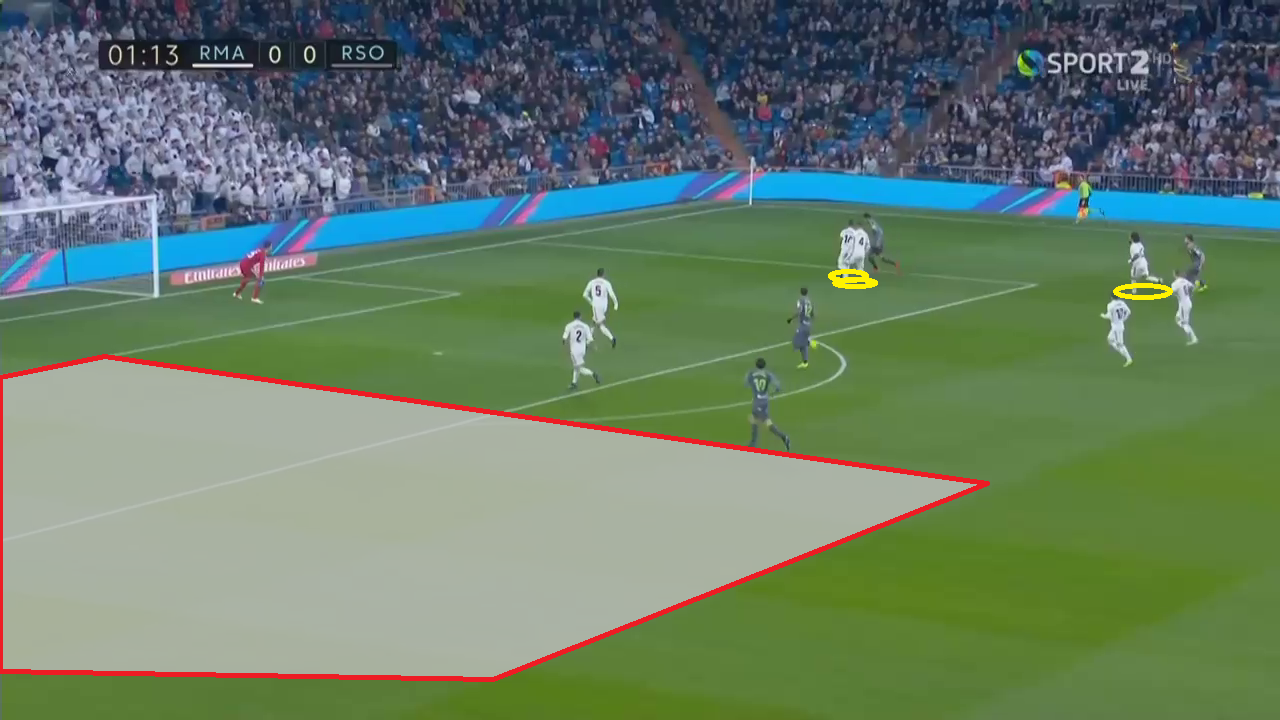 It was clear that Solari was concerned by the issue too. Substituting vice-captain Marcelo for recent youth team graduate Sergio Reguilon was as clear a vote of no confidence as he could make as his team looked to get forward in search of an equaliser. Reguilon will likely be given another opportunity up against Leganes in the Copa del Rey in midweek. It may even be the case that there is a first team spot up for grabs if he can live up to expectations.

No clear plan in attack

Without Gareth Bale, it was clear that Solari was going to be left with little choice but to experiment in attack. Marco Asensio has also been sidelined by injury and left the coach with very little choice. He still surprised many when he decided to leave Isco on the bench and instead pick young Brazilian winger Vinicius for his first La Liga start.

However, beyond the selection of the front three, there was very little game plan. Vinicius was joined by Karim Benzema and Lucas Vazquez in attack, but the three very much gave the appearance of a trio playing together for the first time.

It is nothing new that the French centre-forward is often caught deep, dropping in to pick up position. This frequently leaves space, yet the widemen failed to adapt. When Benzema holds up play well, it opens up space for them to bomb down the wing and cut inside.

However, against Real Sociedad, that was not the case at all. Too often, Vinicius drifted centrally, prohibiting Benzema from catching up with play and leaving space on the flanks. Add in the fact that Vazquez was operating more as a midfielder than a forward, and Real Madrid found that their attackers were treading on each other’s toes in a narrow space, rather than pulling the Basque defence all over the place. 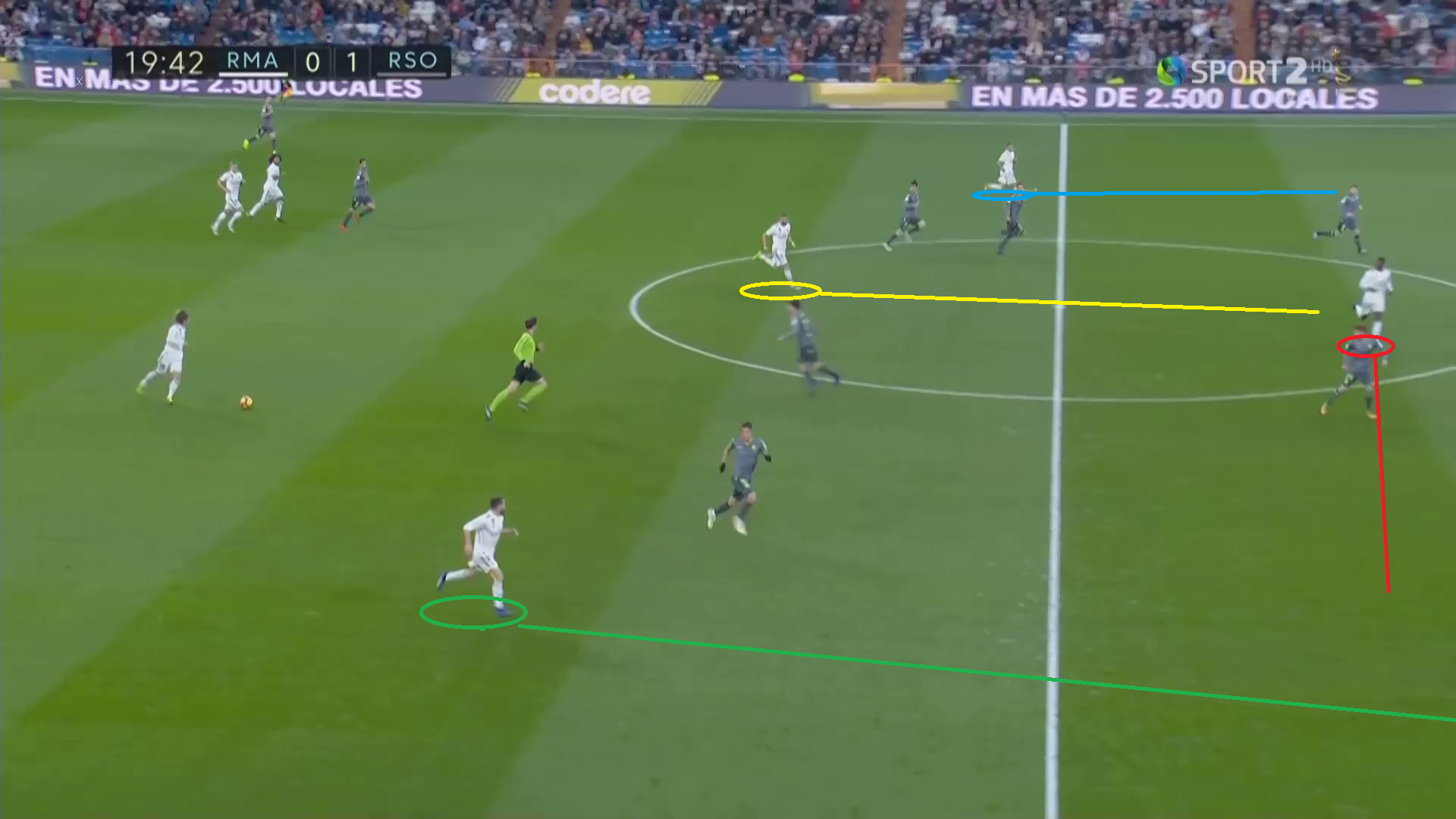 After years of the ‘BBC’ trident dominating all and Cristiano Ronaldo being the clear leader in attack, the vacuum is clear for all to see. Solari has failed to adapt the team’s gameplan effectively and opposition defences are enjoying the absolute chaos that Real Madrid create each time they try to break forwards. Not only has Cristiano’s departure and Bale’s injury left the team without a cutting edge at the final hurdle in terms of quality, but it has also left the attack without a direction.

With seven progressive runs and 11 touches in the box, more than any other player, it was clear who was the dominant force in Real Madrid’s attack. The lack of a clear game plan in the final third meant that there was chaos, but it also opened up an opportunity for Vinicius to stand out and stake his claim. Giving him space in behind to run on to, he also capitalised on Real Sociedad’s high defensive line to use his pace and really threaten.

There was no better example than the incident which many believe should have led to a penalty for the hosts, just after the hour mark. Lucas Vazquez had been sent off and Isco introduced, but Los Blancos continued to bunch up in the middle of the park. Still, Vinicius found a way to create and exploit space, leaving Aritz Elustondo for dead and racing through. Rulli got his fingertips to the ball and tipped it away, bringing the Brazilian down in the process. 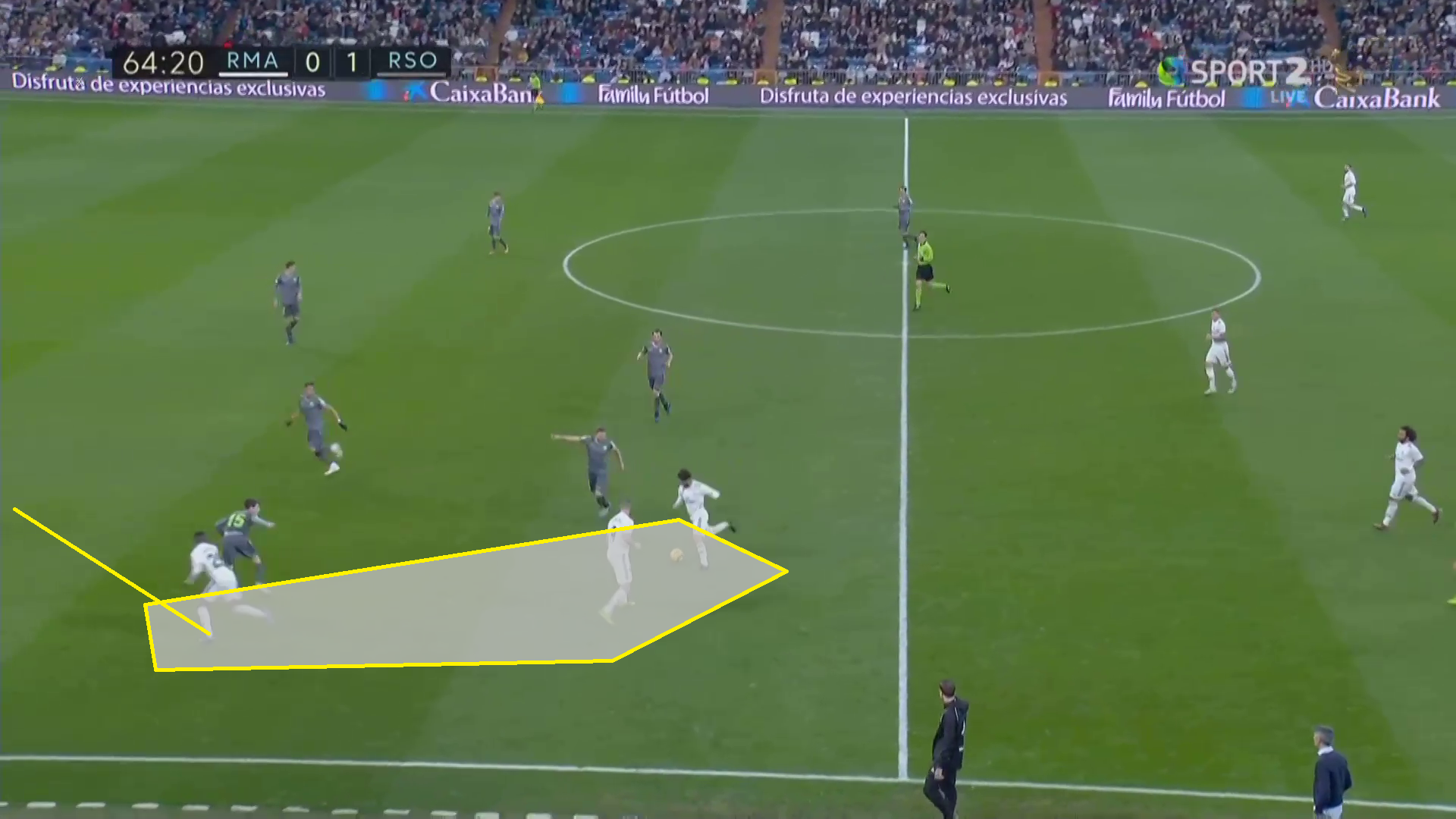 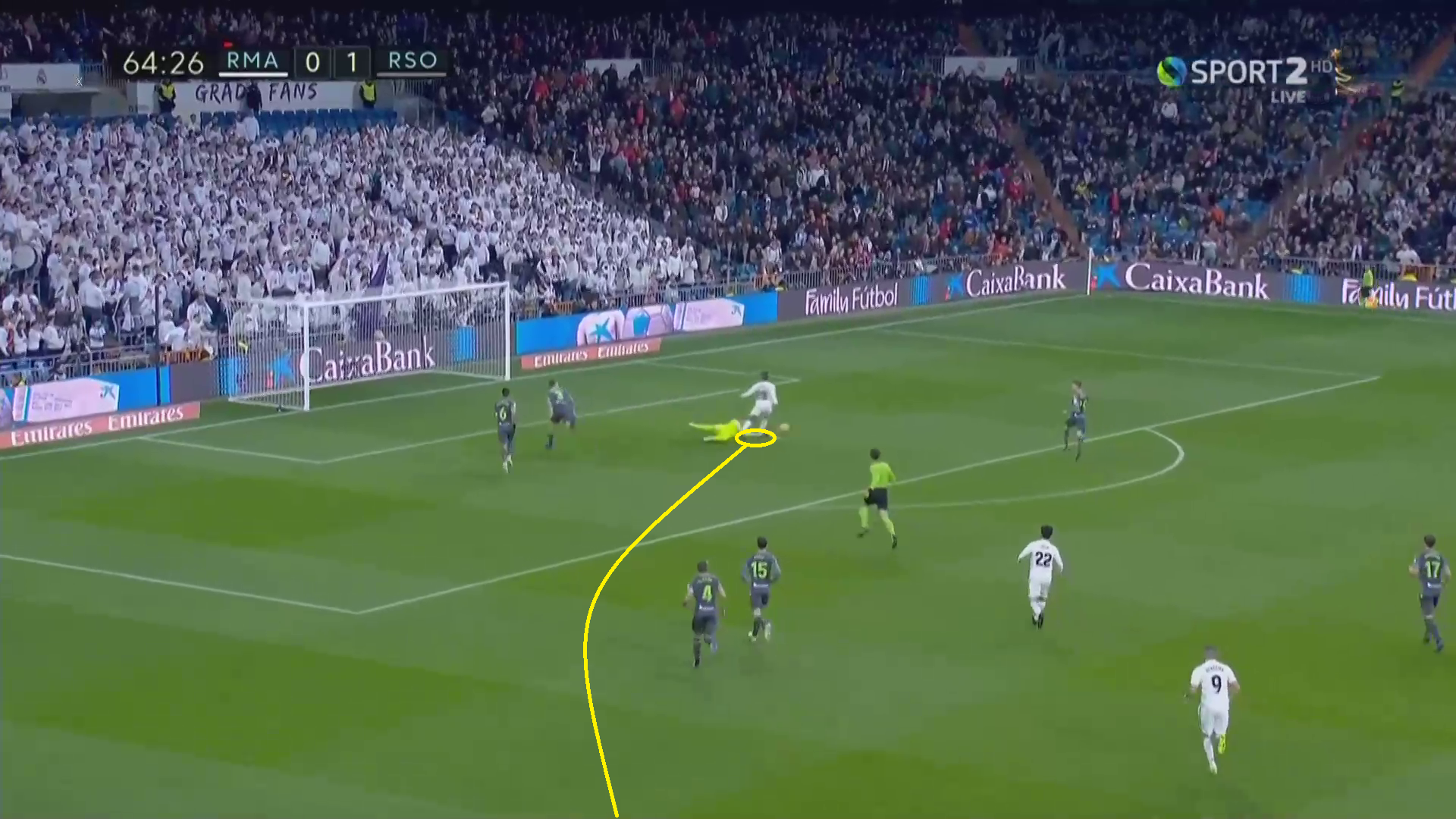 It was one of several moments where Vinicius’ forward runs got the Bernabeu crowd off of their feet, something which has been all too rare this season. It is clear that he is still an incrediblly raw talent, as reflected by his failure to add an end product. Sunday was the third time this season he has under-performed, with an xG more than one goal higher than he has achieved. On top of that, he completed just one cross. Add that finishing touch, however, and he could be the man to fill the Cristiano-shaped hole in Real Madrid’s attack.

Vazquez’s sending off took a chaotic Real Madrid display to a scene of every man for himself. Real Madrid knew that a goal was a must and they threw themselves forward with no kind of restraint or defensive organisation. All it really achieved though was to open up more opportunities for Real Sociedad on the counter.

Analysts could point to Real Madrid’s 3.4 xG and wonder how the home team failed to find the back of the net, but just as responsible was the 1.61 xG conceded, the 11th time from 18 La Liga games that their xG conceded has been above one.

As La Real broke on the counter, it again left questions over the organisation of the backline. Marcelo was often found way out of position, none more so than in the below example where David Zurutuza pardoned the Brazilian. Zurutuza missed a golden opportunity when the full-back played two men onside in a four vs three attack. 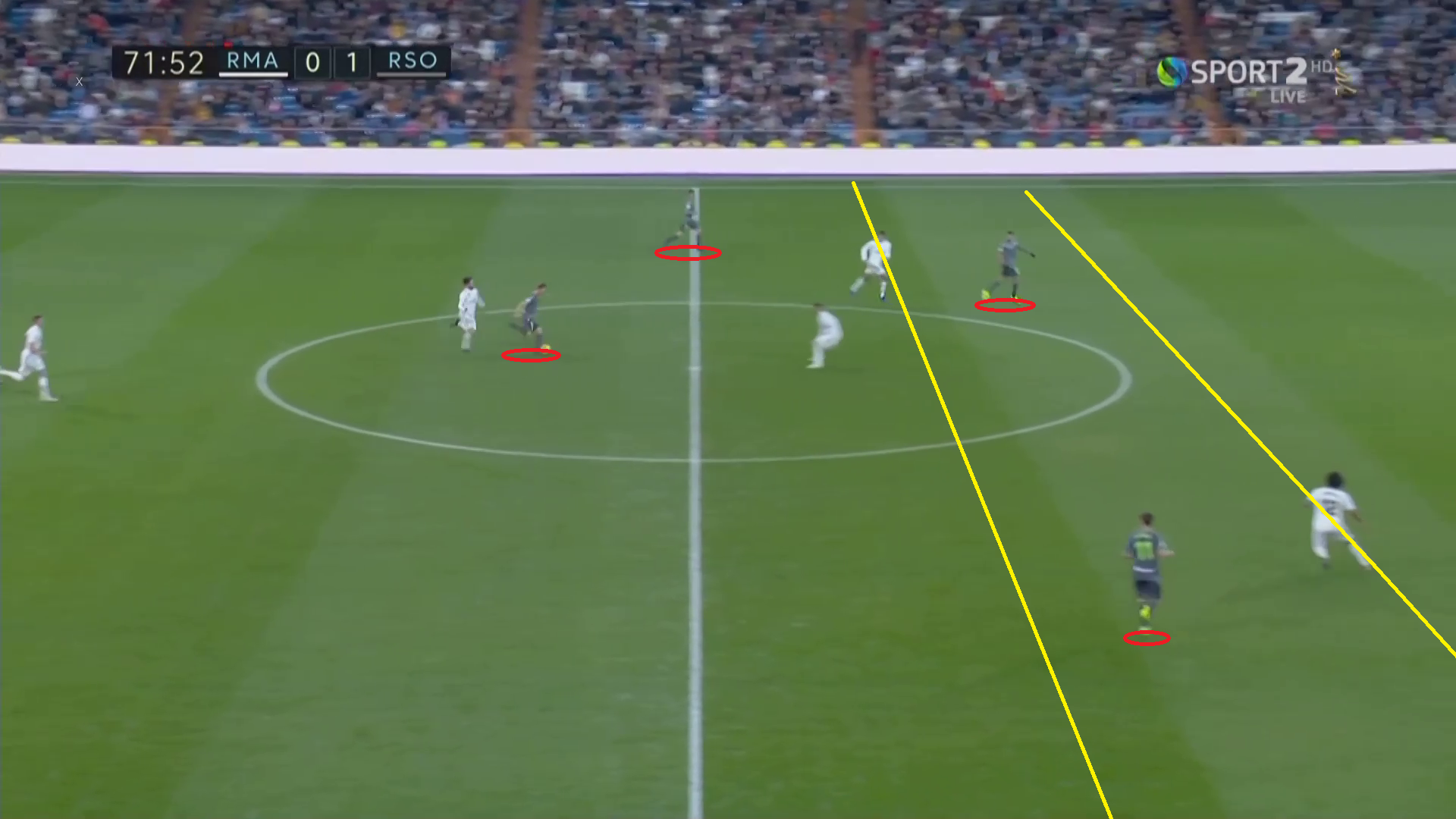 Half of Real Sociedad’s xG came after the hour mark, showing how Real Madrid began to throw men forward with increasing disregard for their defensive obligations. With Toni Kroos struggling with a muscle strain and Isco given a purely attacking role, the defence was left exposed. It failed to stand up to the task against one of La Liga’s least threatening attacking units over the past few months.

Disorganisation was clear all over the field from the off. In the final 20 minutes at the Bernabeu on Sunday, however, it really did look like a team playing for themselves, with little to no instruction from the sidelines.

Injuries are taking their toll, but Real Madrid are a mess. In terms of organisation and planning, let alone game management, the team cut more and more frustrated figures in each passing fixture. Whenever there is a blow against them, such as conceding a penalty in the second minute, heads drop and it becomes a free for all. Solari must do some real work on the training ground, or he risks Florentino Perez identifying the little influence that he has over this team.

Andre Silva: Has the youngster rediscovered his striking force at Sevilla?