Arguably the most anticipated Champions League game of the week occurred on Wednesday night as Barcelona hosted Inter Milan at the Camp Nou. After a faltering start to the 2019/20 La Liga season, Ernesto Valverde has found himself under intense pressure from the media and Barcelona fanbase, and after drawing against Borussia Dortmund in their first Champions League fixture, there was great expectation for a win. Inter’s Antonio Conte has been enjoying a very different time in Milan, as his side have raced to six wins from six games in Serie A. New signings Romelu Lukaku and Alexis Sánchez have both already found the back of the net for the Nerazzurri, and despite drawing at home to Slavia Prague in their first game of this competition, would no doubt have come into this game fancying themselves to upset the hosts. However, it wasn’t to be so and Barcelona snatched a late victory thanks to Luis Suárez’s winner in the final 10 minutes. This tactical analysis looks at the tactics used by both Valverde and Conte as Barcelona won 2-1.

Barcelona went with their favoured 4-3-3 whilst Inter went for a defensive 5-3-2. This was a defensive adaptation of the 3-5-2 formation that Conte has used throughout the Serie A season so far. Interestingly there was a place for Sánchez, who scored against Sampdoria last weekend, before being sent off. 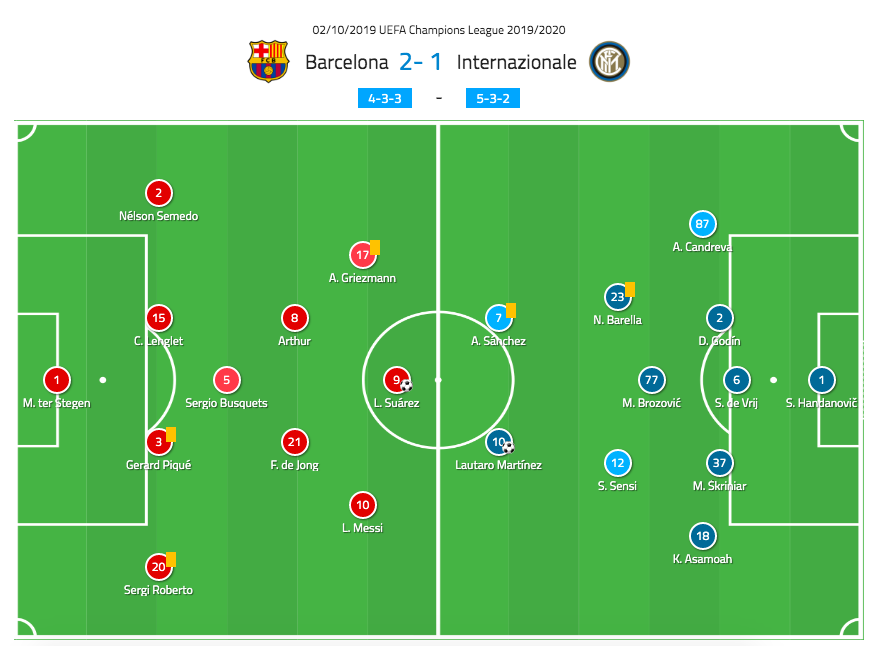 For the majority of the second half Valverde switched to a 4-2-3-1, where Antoine Griezmann and Lionel Messi dropped deeper, leaving Suarez to play by himself against three centre-backs. In doing so it allowed Griezmann and Messi the opportunity to get on the ball more frequently, whilst pulling Inter’s back five out of their deep block.

If you love tactical analysis, then you’ll love the digital magazines from totalfootballanalysis.com – a guaranteed 100+ pages of pure tactical analysis covering topics from the Premier League, Serie A, La Liga, Bundesliga and many, many more. Buy your copy of the September issue for just ₤4.99 here

Under the microscope: What the data says about Atletico Madrid’s recent...

Barcelona out of sorts away from home and it’s not for...