The Basque side of Athletic Bilbao are one of the most intriguing sides in all of Europe. With their tradition and transfer policy dominating the team, it is no surprise that Athletic have plenty to offer in terms of promising young talent.

The Basque-only policy deems that Athletic will only develop and buy players who are native to the Basque region crossing Spain and a small part of France. A restriction which many would assume would hinder the competitiveness of the side but that is far from the truth. Athletic have never been relegated from Spain’s top tier and have a plethora of trophies to their name.

One of the reasons for this success is due to the unbelievable talent which gets produced from Athletic’s youth academy known as a ‘Cantera.’ Directly translating to ‘quarry’ in English, Athletic have unearthed many gems and gone on to make huge profit – Manchester City’s Aymeric Laporte and Chelsea’s Kepa Arizzabalaga being the latest in a long line to sell for huge profit.

The space occupied by the outgoing Laporte was always going to be a huge void to fill but Athletic’s Cantera dug out the latest in a long line of defensive rocks – last quarry pun I promise. Unai Núñez, born in the coastal Basque town of Portugalete, joined Bilbao’s academy in Lezama at the age of 10. 8 years later he made his debut for Athletic’s feeder side Basconia in the Tercera division.

This was the beginning of a rise to the senior team. Initially making 28 appearances for Basconia before joining Athletic’s B-side for the subsequent season. Núñez made 33 appearances for the Segunda Division B side before making his senior team debut in August of 2017 at the age of 20. A 10-year journey from academy to first-team turning a lot of heads along the way.

Those heads have also been turned at a national level and Núñez has now made 10 appearances for the Spain under-21 squad.

So, what makes Unai Núñez the player which has caught the eyes and grabbed the hearts of the Athletic faithful. Standing at 6 ft 1 inches tall, Núñez has the physical presence in combination with the pace of an all-around modern centre-half. His range of passing allows for quick-turnaround combination play with the pivot midfielders and a reactive offensive play after an interception or challenge.

Athletic’s wing play with the likes of Inaki Williams, Susaeta, Muniain or Cordoba providing the width is key to Athletic’s chances of reeling in victories. The burst of pace, from Inaki in particular, is often a thorn in many La Liga team’s sides. Núñez uses the confidence at his disposal to enable these wide forwards with chances when the opportunity arises. 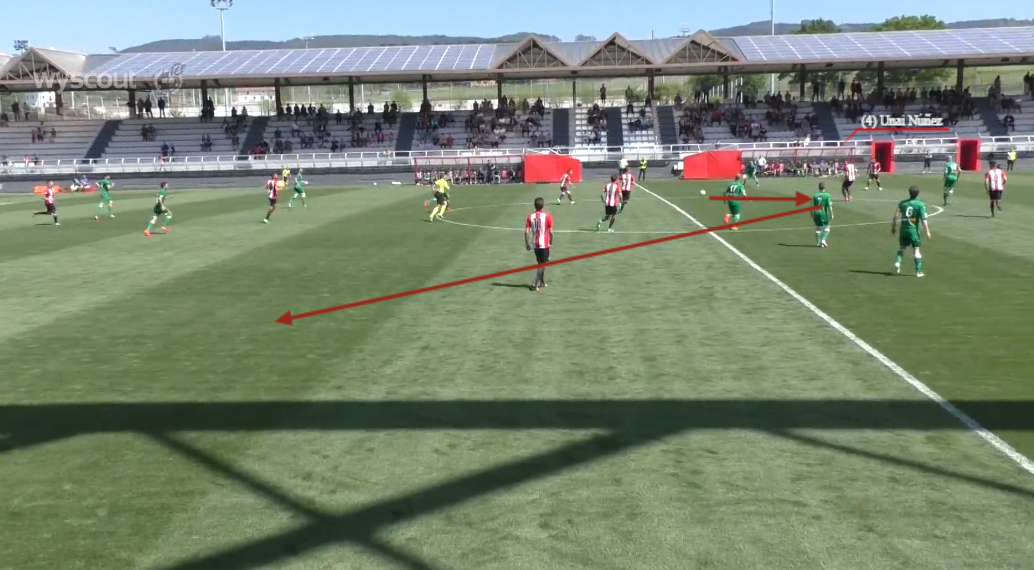 As you can see from the image above, playing for Athletic’s B side, Núñez receives a loose ball to feet and is immediately ready to play the pass out to the wide left. Athletic fine-tune their youth teams to be adapted to playing the style of the first team so that the transition from youth to senior side is that much smoother. You can see in the image below Núñez’s pass has found the wide player in a position ready to move forward to create a chance for the central striker.

Athletic’s history of commanding central strikers like Aduriz currently and Fernando Llorente previously make this style of the play imperative to success offensively. 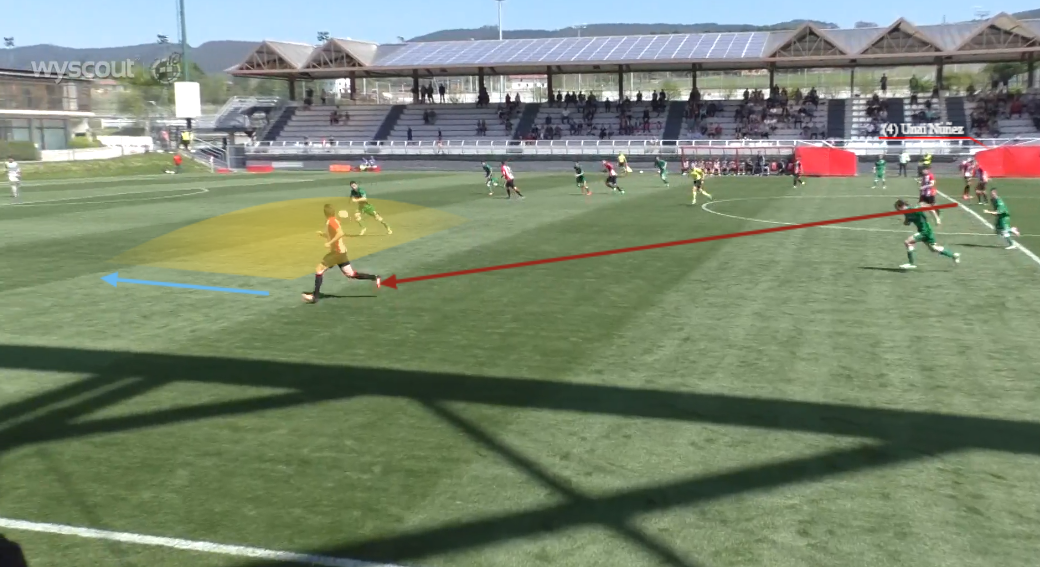 The development of Núñez has been key to his success on the international stage. See below, Núñez receives a pass onto his right foot and his instinctive nature leads him to look to the opposing flank and find the winger. 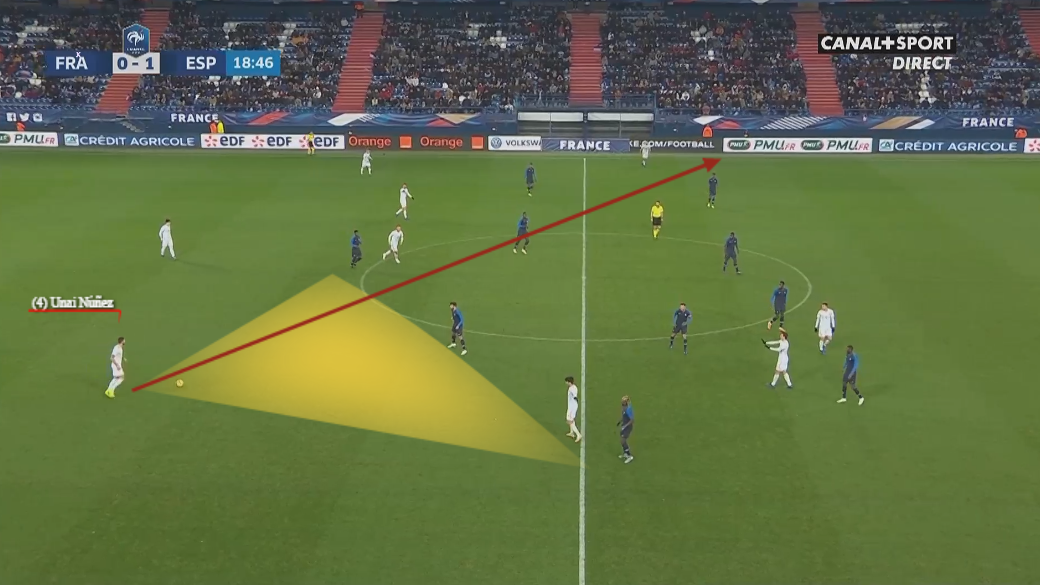 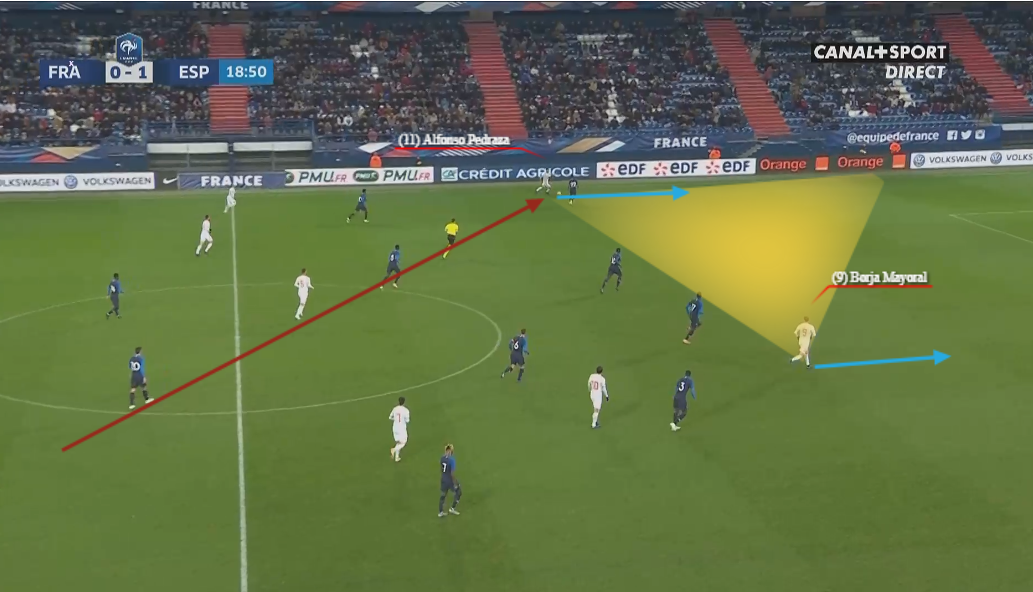 The development undertaken at Athletic has meant his success on a youth international stage with the under 21s put Núñez in good stead ahead of what could be a fruitful international career. Spain’s call-up of Mario Hermoso of Espanyol to the senior side who has similar passing abilities but, on the left, could lead to a possible pairing of the two in the future. Their height and pace in combination with confidence and maturity at such young ages could provide a future replacement strategy to the defensive fulcrums of Sergio Ramos and Gerard Pique but to a much more mobile and versatile partnership.

As mentioned, Núñez’s pace will be an instant attribute apparent when watching the defender. As demonstrated in the series of images, the Basque’s pace allows him to cover the full-backs who are caught out of position during opposition counter-attacks by sprinting to intercept or tackle an opposing forward. 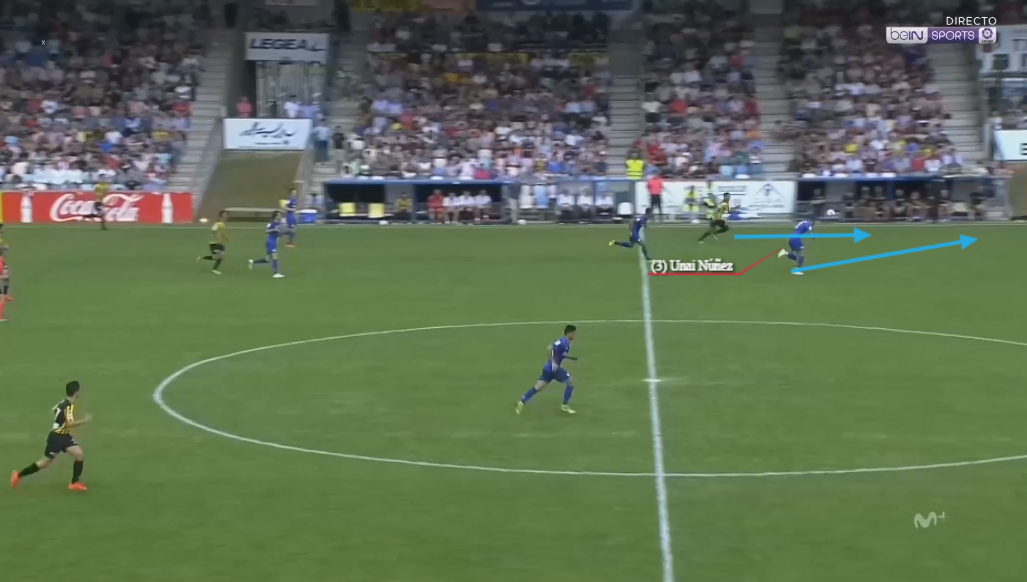 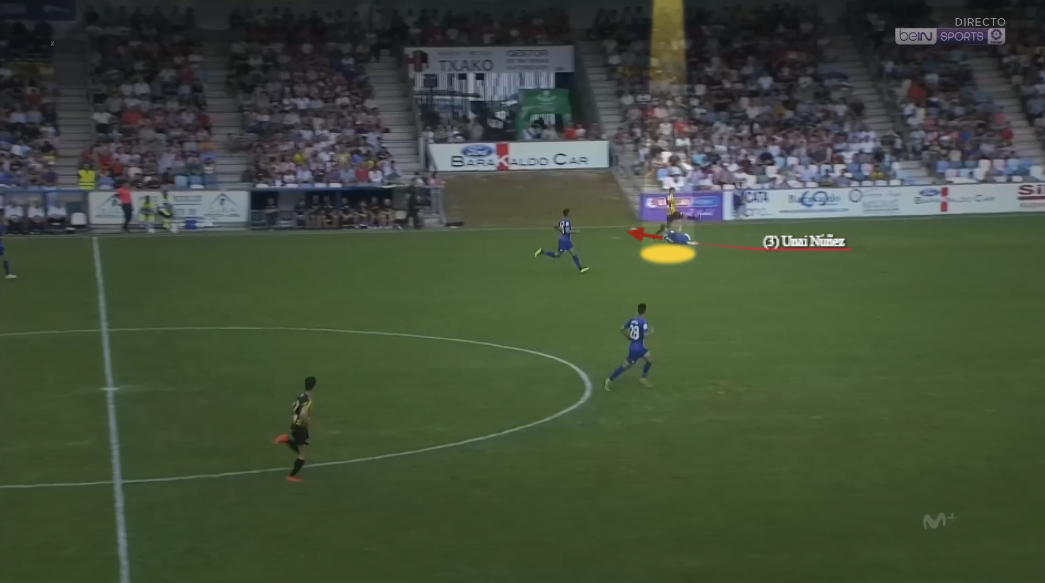 The situation of playing in La Liga will thrust centre-halves into situations of competing against some of the fastest wingers in the European game, having the velocity which Núñez possesses makes these situations increasingly manageable for the teams he represents.

In addition to this, his strength in defensive situations has allowed Núñez to begin developing a key defensive move which is becoming a trademark for the defender. As displayed in the below images, Núñez performs the move whereby he harnesses the space created by a dribbling attacking player and the ball. He uses his strength to get in between the player and the ball to recover possession and initiate a move for his side. 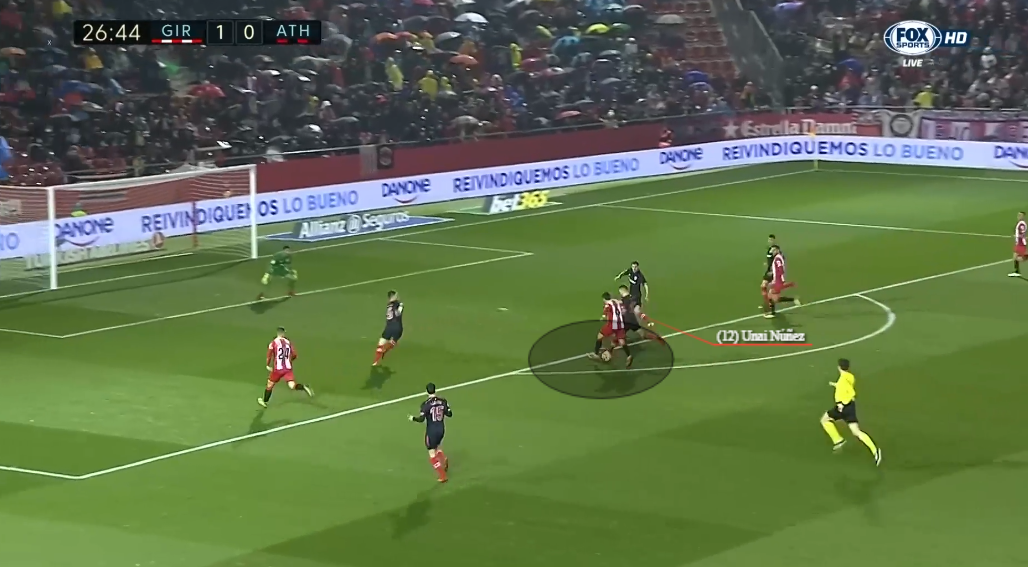 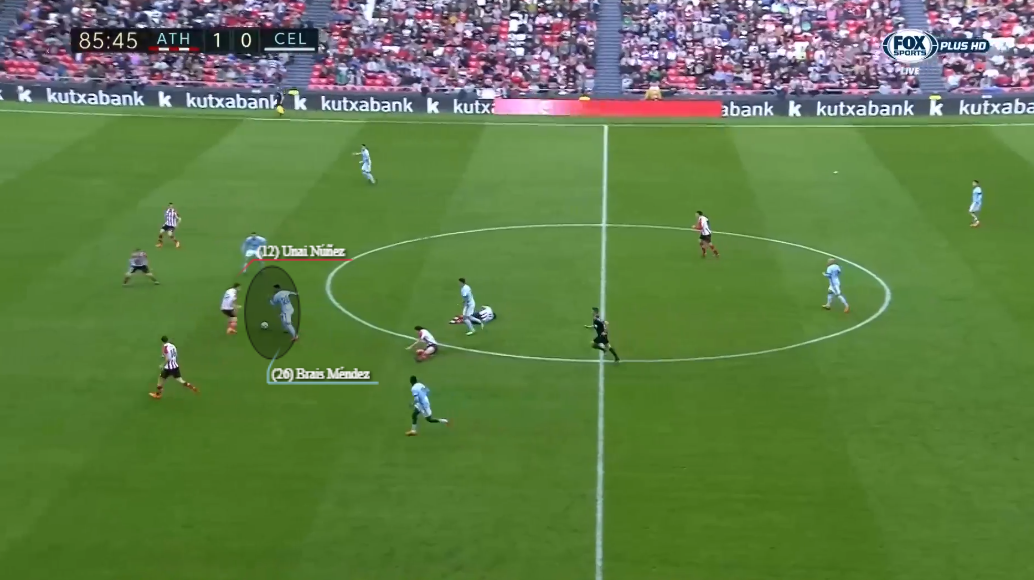 Here you see in Athletic’s game against Celta Vigo, Spain international Brais Mendez is running at the Athletic defence and Mendez creates the gap between himself and the ball. The image below shows how Núñez exploits the gap to regain possession effectively. 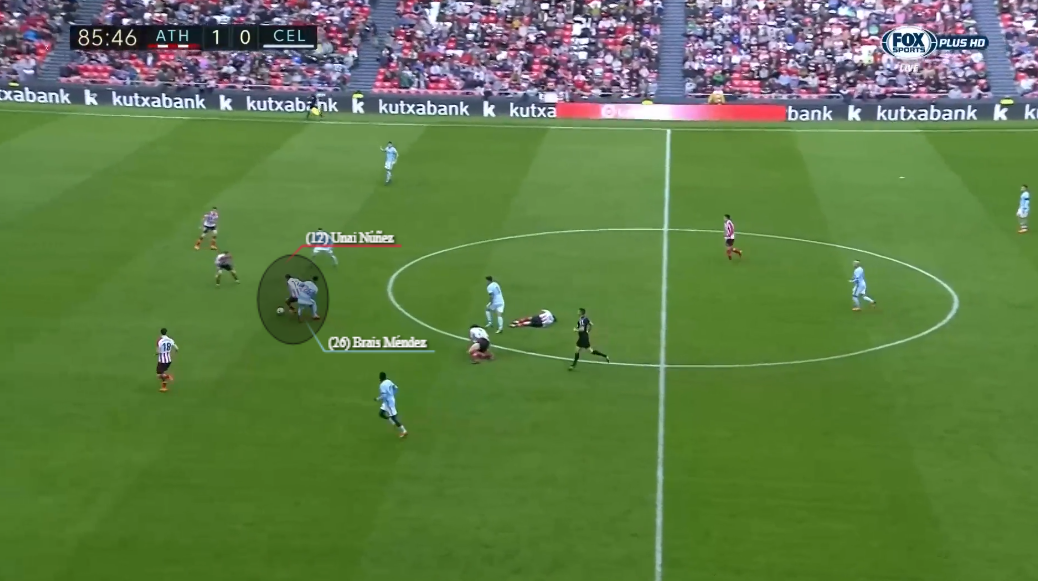 It should be noted that now for Núñez to improve and stake a stronger claim for a national first team call-up he needs to make these types of challenges more frequently and successfully. Núñez won 47.4% of duels last season and, in the matches so far this season he has won 47.8%. This statistic needs to see an increase into the 50s. Failure to do so might cost him a place in Luis Enrique’s squad in the near future and possibly the long-term.

His passing though is key, and those figures remain impressive. A 92% pass completion in 2018/19 with a 60% long passing accuracy. With the tradition of Spain’s national side constructed on the basis of strong passing players from the forward line right back to the goalkeeper, possessing such abilities put Núñez in contention to earn such a call-up.

The future is there for the taking and if Unai Núñez can harness and improve the abilities and natural confidence he possesses its possible that he could be a mainstay in the Spanish line-up moving toward the 2022 World Cup.

How Barcelona broke Manchester United and the Champions League curse to...