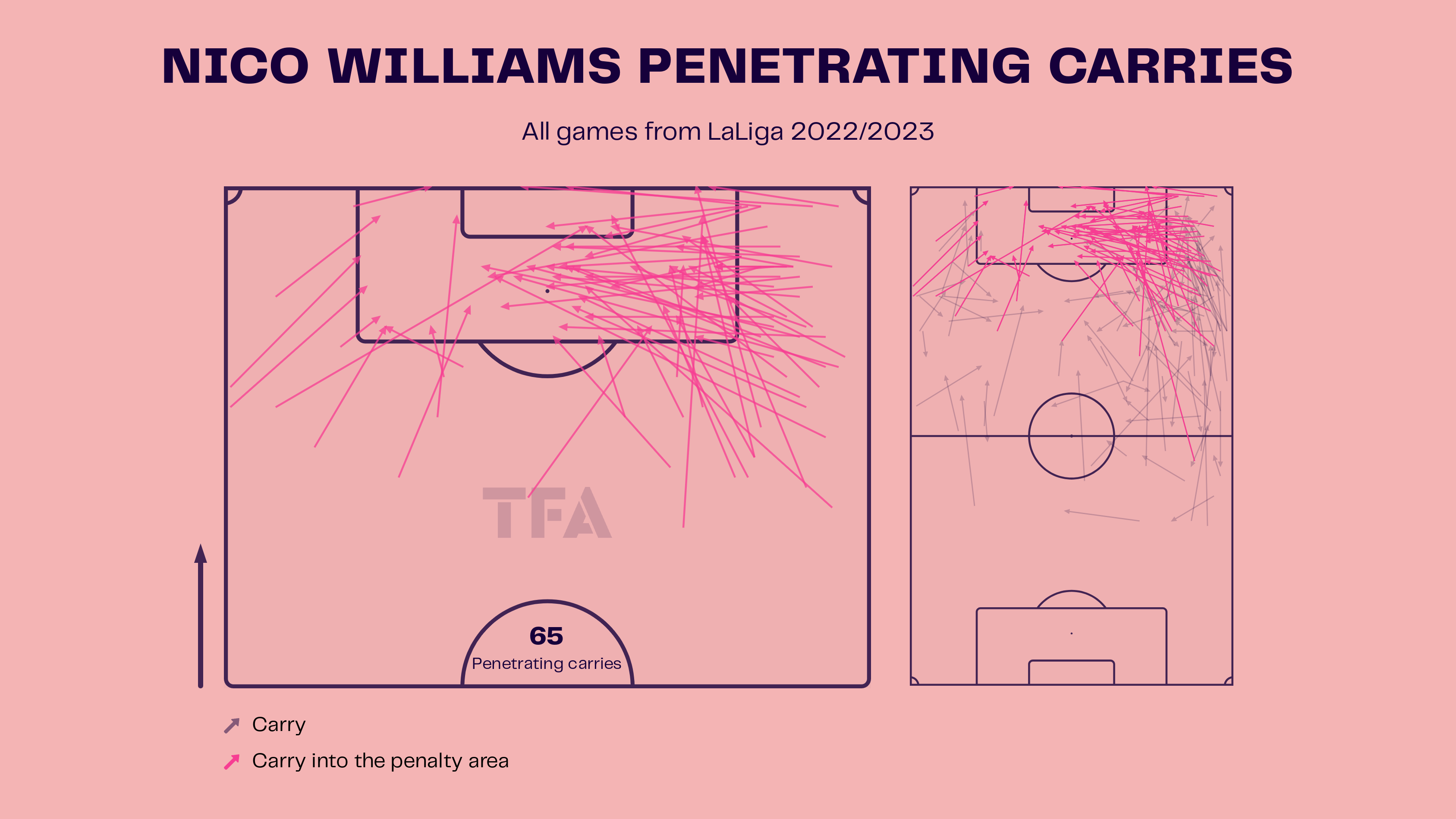 Nico Williams is one of the brightest talents playing in La Liga. The 20-year-old is the brother of Inaki Williams, and both play for the same club, Athletic Bilbao. Athletic Bilbao are now in fourth place in La Liga, and Nico Williams has played a big role in that. He plays as a right-winger and takes on players to pose a constant threat on the right side. The youngster constantly threatens the opposition’s defence with his pace, dribbles, and shooting. He has scored three goals and assisted three further goals this season, which got him a spot in the Spanish National Team for the World Cup. We take a look at some stats to understand why Nico Williams is a key asset for Athletic Bilbao.

Nico Williams made 14 appearances this season, starting 13 of them and coming on as a substitute in one. He has three goals and three assists to his name in La Liga and has scored once in the Copa Del Rey as well. 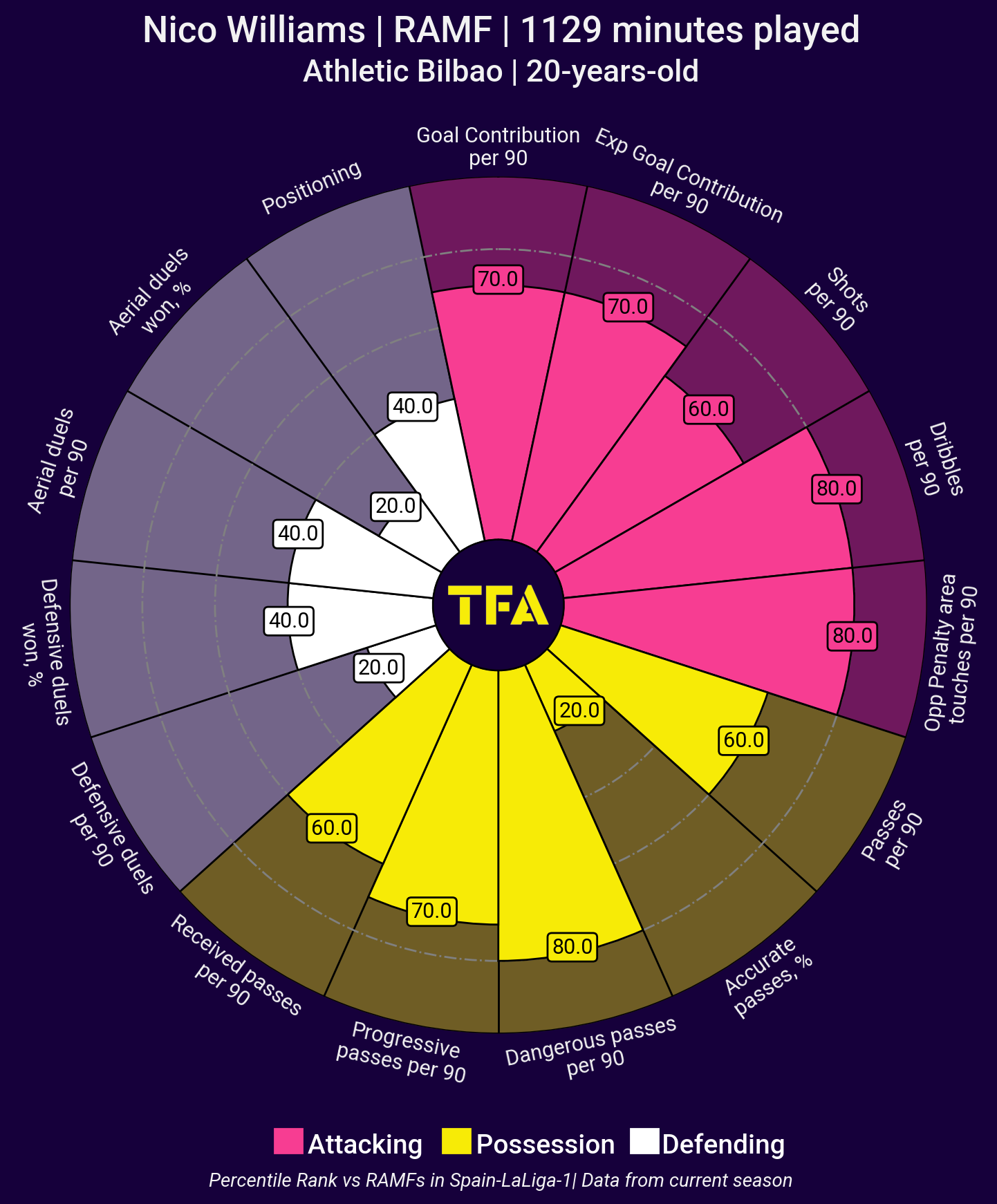 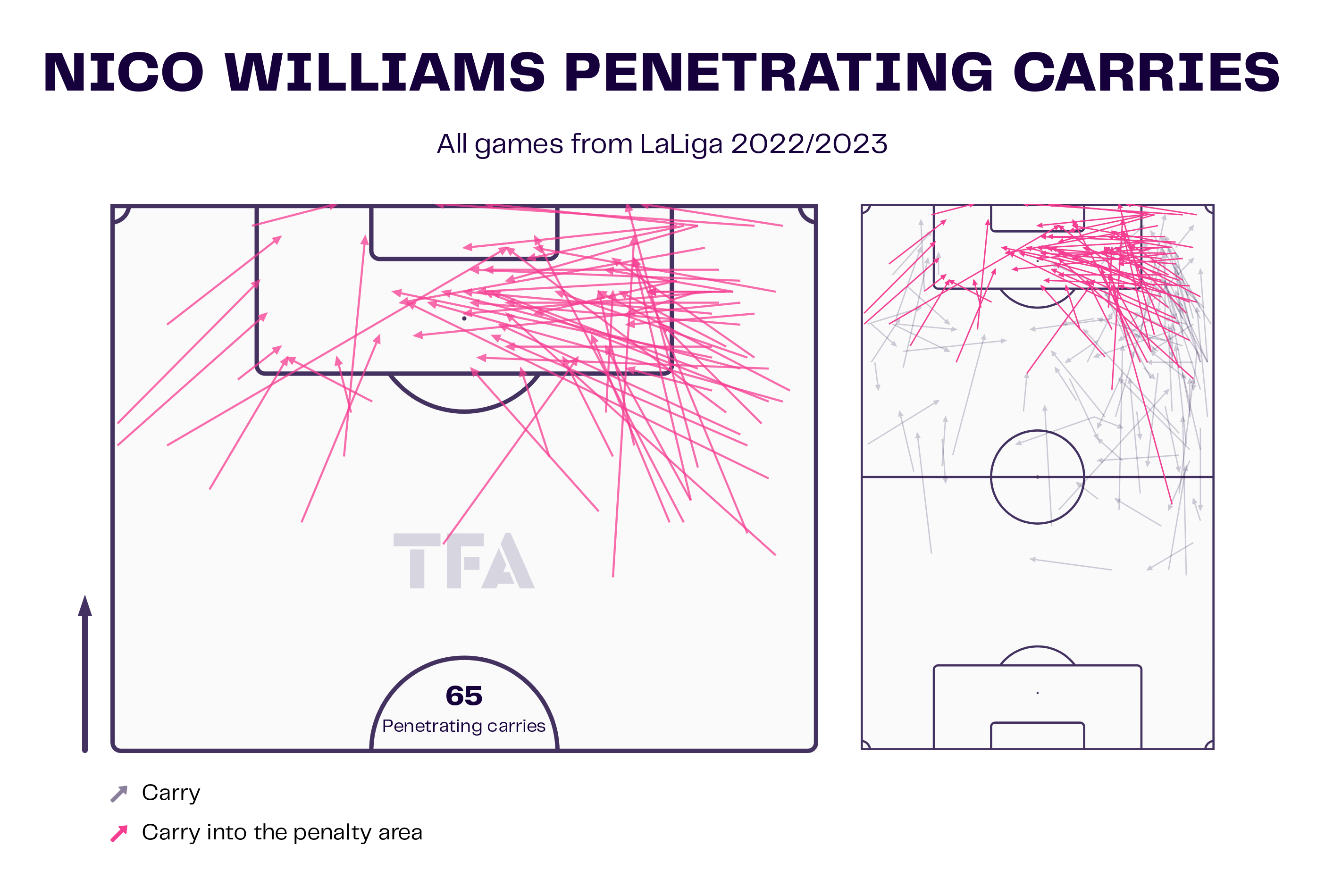 Dribbling is undoubtedly one of Nico William’s main strengths. He can go past players with ease and uses his pace to good effect. The above visual shows the penetrating carries made by Williams in the current season of La Liga. He has made 65 penetrating carries with an average of 8.21 dribbles per game and a 59.2% success rate. We can observe from the map that he stays wide on the right flank and usually prefers to cut inside into the penalty box, where he enjoys an average of 3.91 touches per game. 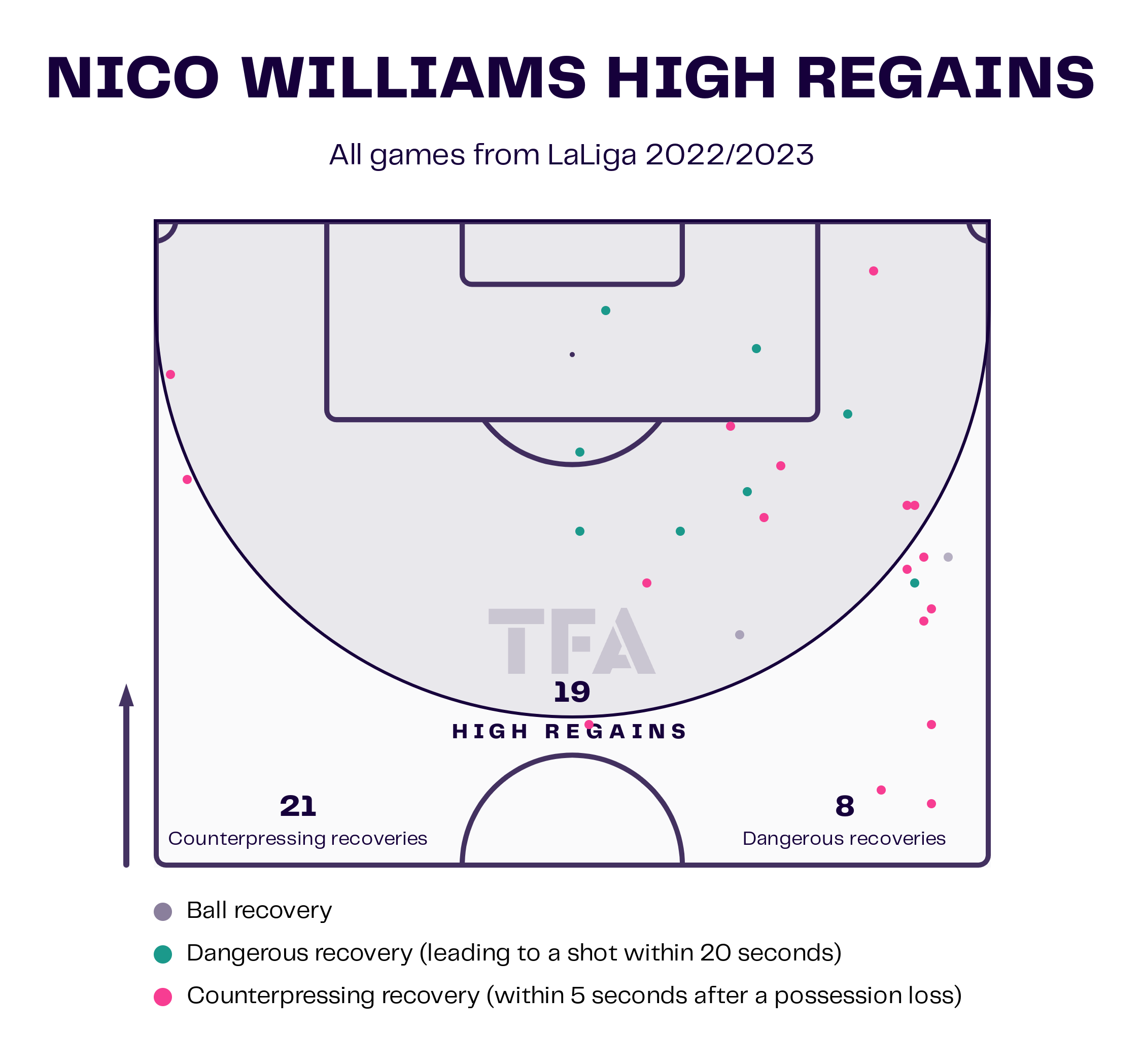 Another way in which Nico Williams contributed to Athletic Bilbao is through his pressing. He has made 21 counterpressing recoveries and eight dangerous recoveries. This has helped the club a lot to keep the pressure on the opposition. Williams makes an average of 4.466 recoveries per game, with 67.9% of them in the opposition’s half. 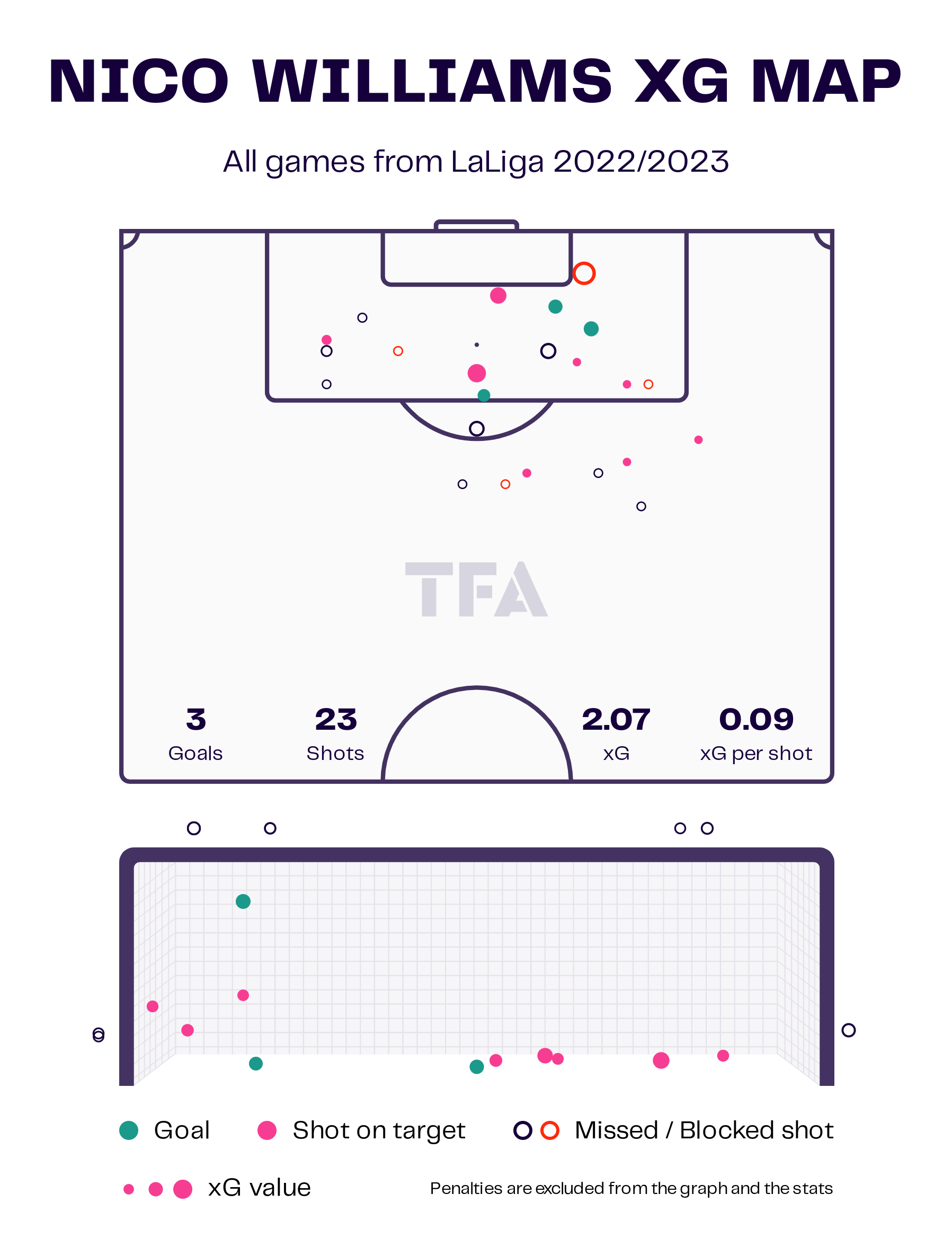 Nico has three goals to his name this season and has looked dangerous in front of goal. His quick nature makes it hard to stop him. He has tried a total of 23 shots so far this season, with 11 on target. Williams takes an average of 1.83 shots per game with a 47.8% accuracy rate. Since most of his shots are taken away from the goal, the xG per shot is very low. 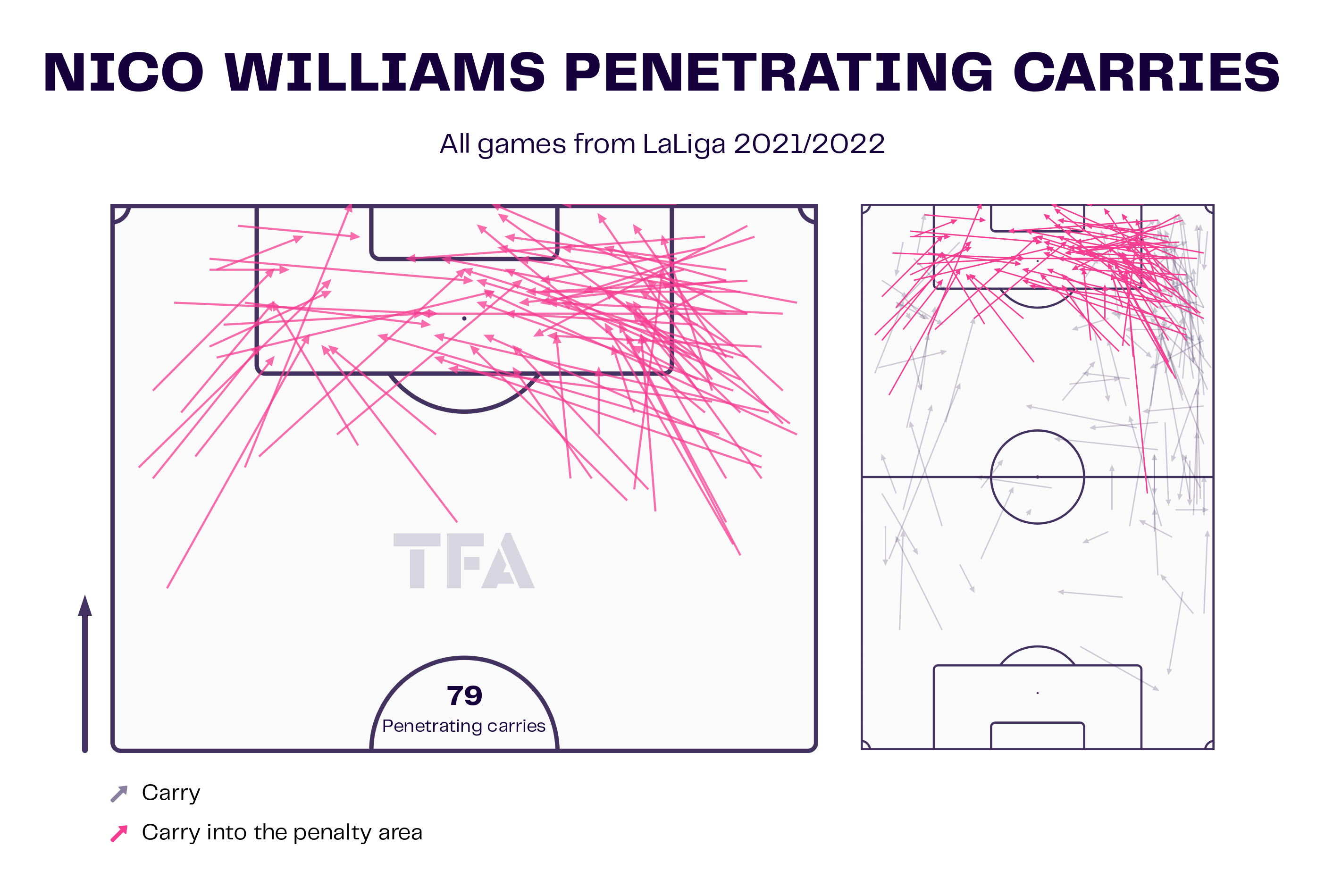 Compared to last season, where he made 79 penetrating carries, Nico Williams is already catching up to that figure. He has made 65 penetrating carries this year in 20 fewer matches than last season. However, his dribbles per game have fallen from 9.8 dribbles per game with a 54.6% success rate to 8.21 per game this year. But the fact that he has penetrated the defensive line almost as much as he did the previous season is an encouraging sign. 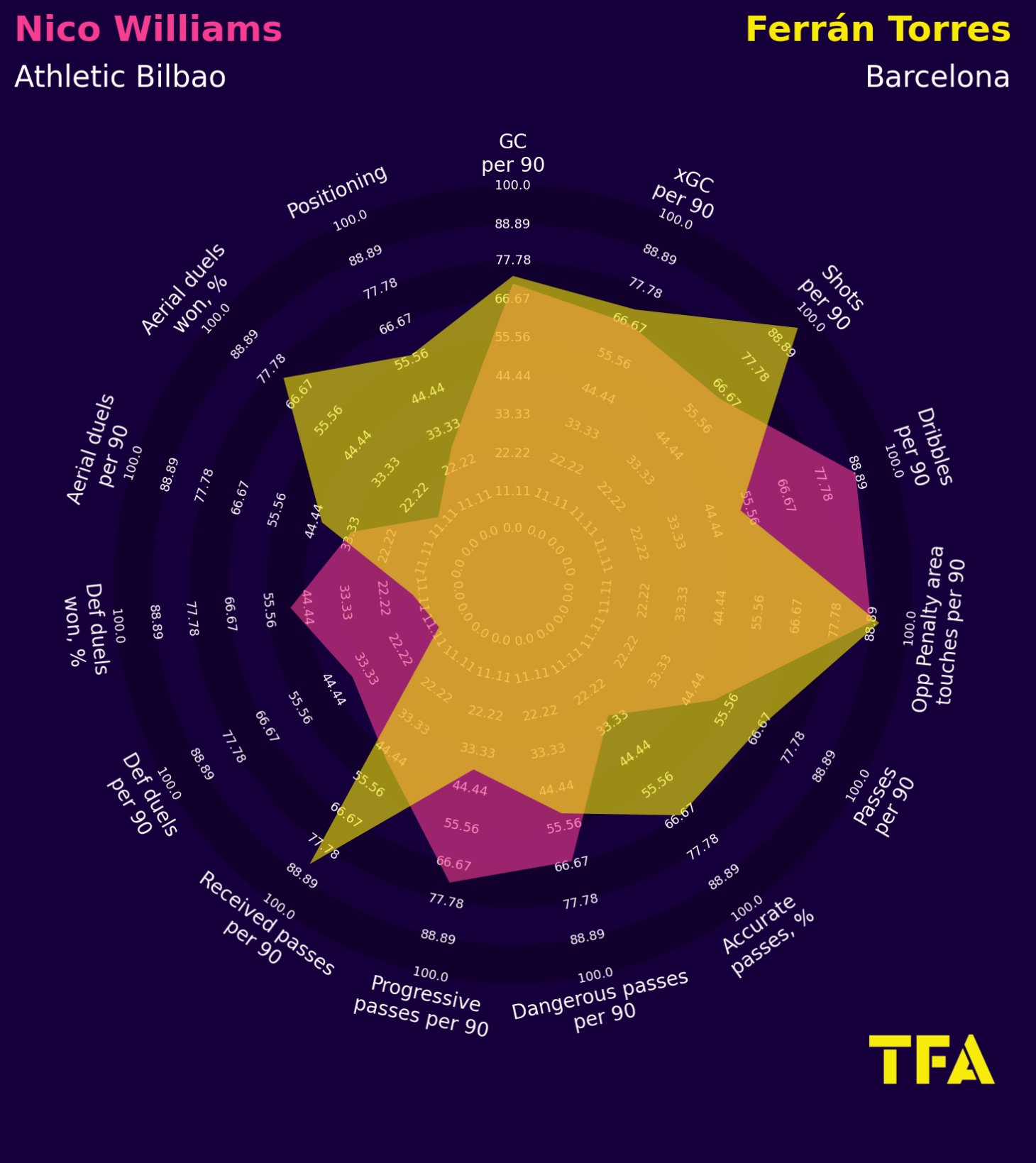 The above visual compares the radars of two players who were used by Luis Enrique to play on the right wing. While Ferran was given the start in almost all the matches, Nico too got his fair share of game time. He came in as a substitute and managed to create an impact with his pace and dribbles. If we look at the radars, we can observe that Ferran has better stats in passing accuracy, passes per game, shots, and aerial duels won. Whereas, Nico Williams has better dribbling, defensive duels, and dangerous passes per 90 minutes.

Nico Williams is a bright spark in the Athletic Bilbao team and has provided real oomph in the final third. He has improved his scoring form from last season when he couldn’t score even a goal. Williams was impressive when he came on for Spain in the World Cup, too. His pace and dribbles were noticed, and newly appointed manager Ernesto Valverde will be hoping that the star youngster can keep producing good results.

Under the microscope: The metrics behind Real Sociedad’s rise to the...